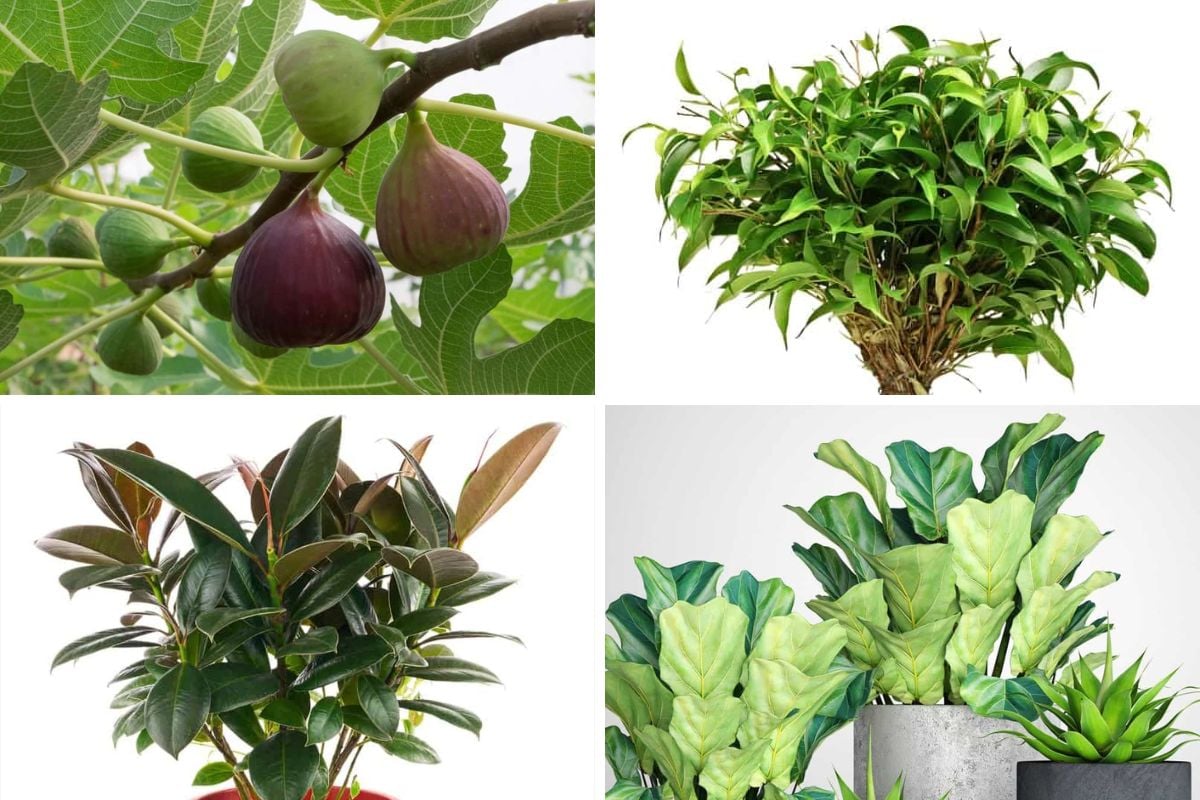 Figs are a widely consumed type of fruit, which are well received by both native as well as non-native people. What many people do not know, however, is whether these delectable fruits grow on trees, shrubs, bushes or vines.

These members of the mulberry family have around 850 different species and grow on all kinds of plants; trees, shrubs, vines, bushes, as epiphytes, and even as hemi-epiphytes.

Figs, otherwise known as Ficus, are an Asian species of flowering plants and are indigenous to parts of Asia and the Middle East. This fruit is of significant importance in the areas where it is cultivated for different reasons both culturally as well as religiously.

The Ficus or fig tree has been highly sought after and grown since ancient times. Although the fig tree is now widely grown globally, for both its delicious fruit as well as a decorative plant, it is still commercially grown mostly in its native areas.

Ficus trees have had a significant influence on both cultural and religious practices and traditions. Most of the popular practices link the Ficus tree back to one of its native lands, Asia.

Species of Ficus, such as the sacred fig trees of Pipal, Bodhi, Ficus religiosa, and the banyan fig have long been considered as holy trees.

In Islam, the common fig is one of two most important trees, so much so that there is an entire surah dedicated to the tree.

Ficus trees also hold great importance in Buddhism and Hinduism. The Buddha is said to have found enlightenment while meditating under a Ficus tree. Trees of the same species are regarded as Ashvattha or the “world’s tree” in Hinduism.

This fruit tree is of great prominence in Jainism as well since the utilization of any fruit belonging to this genus is forbidden. The common fig tree has also been cited in the Bible, and it is believed that Adam and Eve covered their bodies with leaves from a Ficus tree. Jesus is also said to have cursed a fig tree for not bearing any fruit.

Culturally speaking, the Ficus fruit is a traditional yield of Israel and is named in the list of food that was found in the Promised Land, in accordance with the Torah. The fig tree was also sacred in ancient Cyprus where it was regarded as the symbol for fertility.

Ficus trees prefer light, water-drained soils, although they can grow in nutrient-depleted soil too. Because these plants like to grow in free-drained soils, they can bear dry spells as well. Climatically speaking, the Middle Eastern and Mediterranean climates are most suitable for these trees.

When grown in favorable habitats, these plants can grow to a significant size and spread to quite an area providing shade for those in need.

Ficus trees are known for their intensive root structures. These long roots help the tree absorb water, and even draw water from under the ground when required. In such cases, fig trees absorb the water and help cool the atmosphere of hot places.

This also helps to create an encouraging habitat for many other animals who then take shelter in the fig trees’ shade in times heat waves and dry spells.

Fig trees are popular for their unusual pollination process. Special wasps called fig wasps pollinate fig flowers. These wasps crawl inside the fruit through a narrow hole and lose their wings in the process, forcing them to remain inside and eventually die.

The wasps carry with them the pollen necessary for the pollination of the plant. After pollinating, the fruit releases digestive enzymes and digests the wasp, thus developing into the fig.

As discussed earlier, the genus Ficus has around 850 species to its name, which means that the Ficus trees are of a lot of different types. While it is not possible to discuss each type at length in this article, we have curated a list of all the common and important types of Ficus trees. 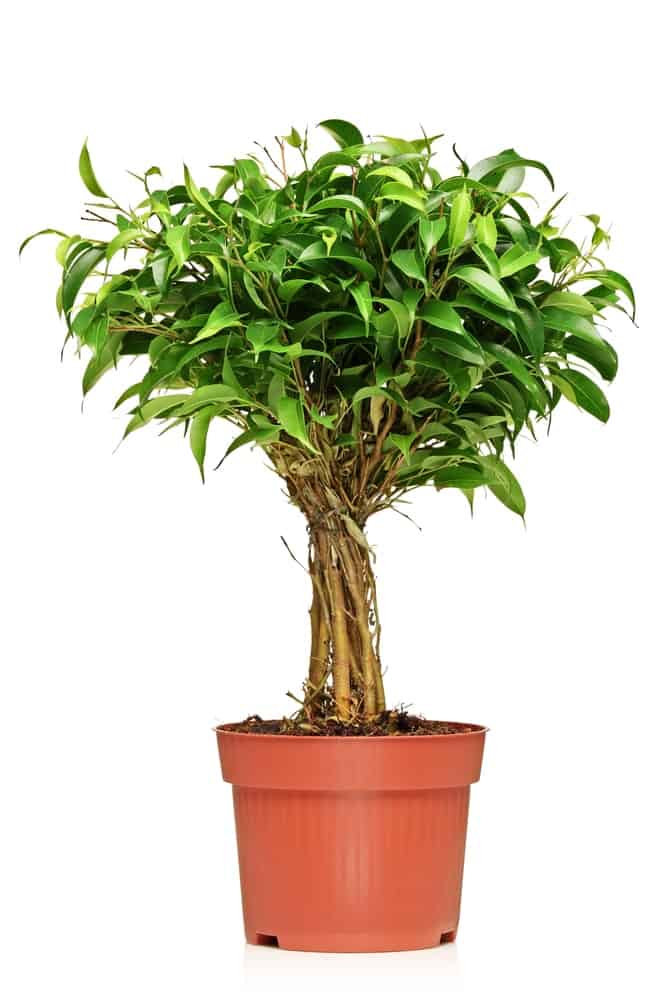 Ficus benjamina is the most famous out of all the other Ficus tree kinds. It has glossy green leaves of usually dark colors and is sometimes blemished. This tree can even thrive in very little light and scarce water. The F.benjamina can grow at a rapid rate when grown in a well light habitat.

In fact, it can reach as tall as 13 feet (4 meters). Ficus benjamina trees are commonly known as weeping trees because of their shedding leaves. They tend to shed off their leaves whenever they are moved to another position or in an unfavorable habitat. 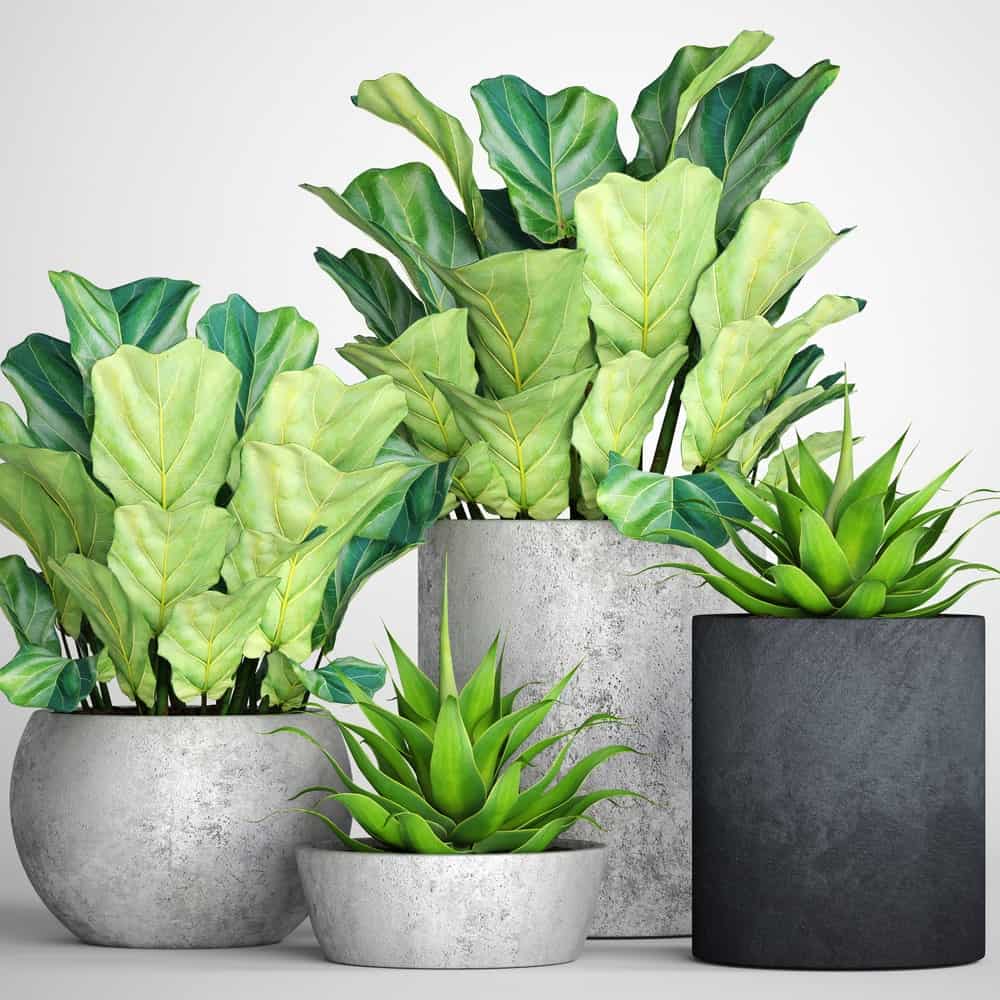 This Ficus tree category is considered to be trendy and is often used as an ornamental piece. It develops into a small tree with oversized leaves. It grows as much as 1½ feet (45 cm) in length.

The F.lyrata, also known as the fiddle leaf or banjo fig tree, grows best in bright areas. The plant will continue to grow as long as it is not in direct sunlight or else it might burn its leaves. It prefers moderate temperatures for development, around 60 to 72°F (15 to 22°C). 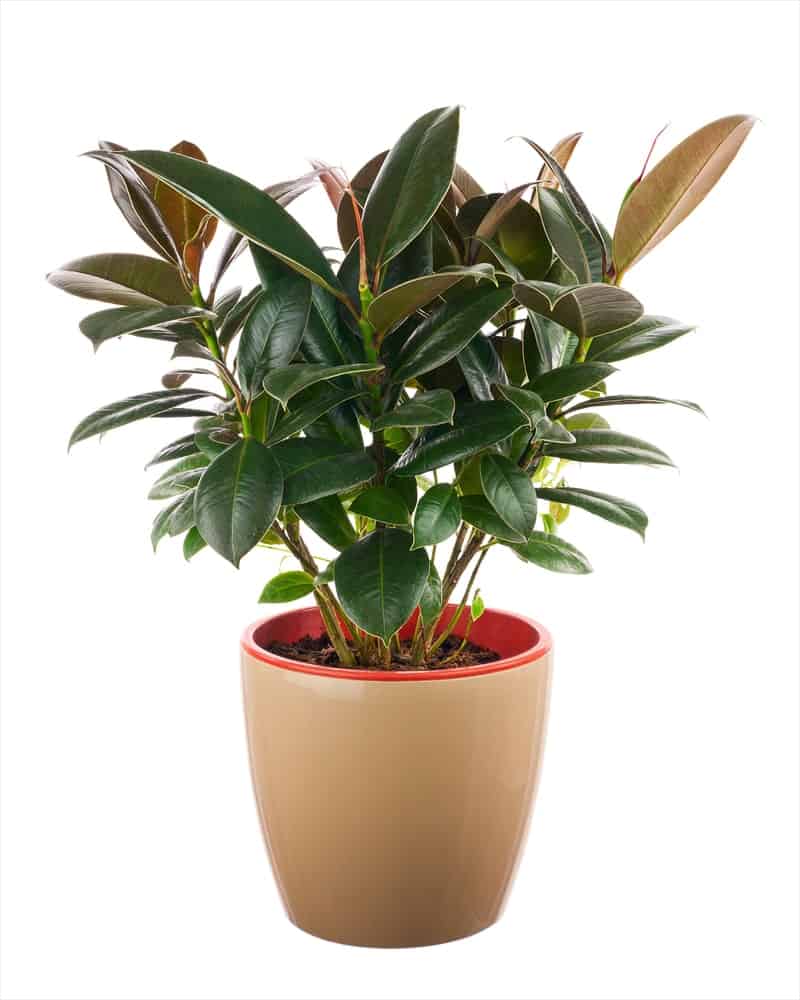 As surprising as it may sound, Ficus elastica is indeed a rubber tree and it is still a species of the fig tree. This type of Ficus tree is actually a cross of different types of Ficus trees that originally came from an Asian tropical forest.

The F.elastica can grow as tall as 130 feet (40 meters) and features large, polished leaves that sometimes sport the same blotches as F. banjamina. It grows best in free-drained soils.

Also, at times, referred to as Ficus ginseng, the F. microcarpa is in fact a twisting aerial root on which leaves grow directly and not really a tree or shrub.

This plant can ascend anywhere from 16 inches to 3 feet (40 cm to 1 m) in height. Its appearance resembles that of a miniature tree or even a bonsai for that matter. This plant is mostly used as an ornamental piece.

Ficus congesta or the cluster figs trees are trees indigenous to Indonesia and the Philippines. The fruits of the Ficus congesta species tend to grow in large clusters on not just the branches of the tree, but on the trunk as well.

The leaves of these trees are initially curled up. Upon unfurling, they display different shades of red which makes the tree look absolutely stunning.

The F. congesta trees are locally called by names such as the congested fig trees, the Satterthwaite fig, and the red leafed figs. These trees grow up to the height of 10 feet to 50 feet in length, in their native areas.

The Ficus carica is normally known by its common name, which is the common fig. This is the fig that most people find in most houseplant stores. The F. carica is very rich in vitamins and minerals, which is why most of the people choose to eat its fruit not fresh but dried.

Its fruit is also used as a dry food staple in places where food is either scarce or difficult to find in the winters. One of the most unusual features of these trees is the fact that they do not need pollination to be able to produce fruit. They are able to do this by a process called parthenocarpy.

This species of Ficus is native to Western Asia and the Middle East where these trees grow up to heights of 10 feet to 30 feet.

This species of the genus Ficus, the Ficus pumila, is a fast-growing vine that is mostly woody in nature. The vines of this species often attach themselves to walls and pipes of buildings and can be very difficult to remove.

The F. pumila is a drought tolerant species. Its vine can thrive in hot and arid habitats with little or even no water. The plants and vines of this species are often used in gardening as ornamental plants, by being be trained and coiled around wireframes in order to create topiaries and pieces of horticultural art.

The F. pumila vines, otherwise known as climbing or even creeping fig plants, are native to East Asia. Moreover, the vines here grow to the amazing lengths of 15 feet to 20 feet.

The Ficus macrophylla specie is one of the biggest species of the Ficus trees genus. The trees of this species feature vast and enormous, curving roots that grow above the surface, over the soil and can be easily seen. The Ficus macrophylal, like the F. benghalensis tree, too is a strangler tree.

Indigenous to Australia, these trees grow to astonishing heights, at times even over 200 feet in length. When we talk about the width of the plant, Ficus macrophylla trees cover a significant area due to the expansion of their leaves. Because of this, these trees are often preferred for plantation in places where shades are needed.

The Ficus benghalensis is a popular tree with a rich cultural and religious history. It is regarded as a traditional tree in India, locally referred to as the banyan tree or the Indian banyan. In other parts of the world, the tree is also known as the strangler figs owing to their way of growing.

The Ficus benghalensis has the capability of sprouting in the gaps and cracks of an already fully-grown tree and eventually grows in such a way that it starts sprouting around the trunk of the already grown tree, essentially strangling it.

Because of their growth patterns, these trees are categorized as epiphytic trees. Their branches form roots, which ultimately extend towards the ground and help the tree become independent. This process allows the Ficus benghalensis trees to spread over and cover a large area.

The F. benghalensis trees have the tendency to grow to significant heights. If grown in favorable conditions, these trees can grow over 100 feet tall in length. When we talk about the width of the tree, certain subspecies of this category can spread out over a wide area that at times can reach up to several acres.

With your newly acquired knowledge of all the important types of Ficus trees, you can now go shopping for houseplants or even start looking for trees for a plant drive confidently.

And if you’re just planning to plant a tree so that you can enjoy its delectable fruit, then you need to know which one’s the best one to go for.

Leveraging the information above, you will be able to understand which types of trees are best suited for you based on the weather conditions of the place you live.

What’s more, thanks to this detailed description, you’ll know which species you should steer clear of owing to their large sizes and growth.

Now you know why the fig tree is revered and given so much importance across different religions and cultures across the globe.

Home Expert (Bot)
Hello, how are you? Ask me anything about interior design, home improvement, home decor, real estate, gardening and furniture.
95 shares