Take a closer look on the fennel, a popular ingredient in numerous dishes, by getting to know its many different types. Learn essential facts about the fennelsuch as its history, benefits, side effects, and more. 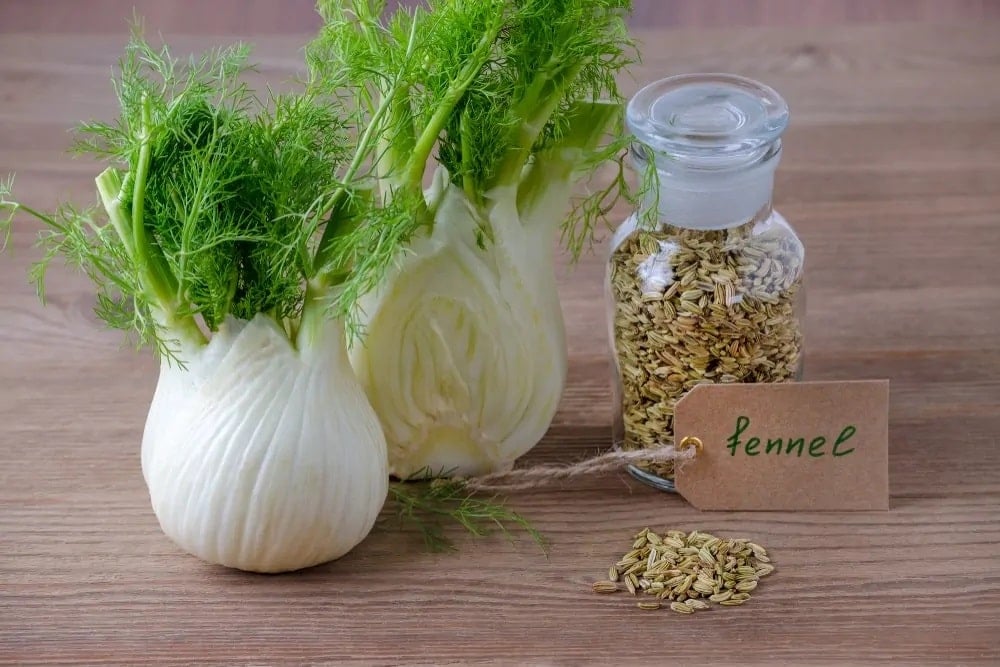 Fennel is a flowering plant that falls in the Umbelliferae or the carrot family. The scientific name of fennel is Foeniculum vulgare. It is a perennial herb with feathery leaves and yellow flowers.

Fennel is an attractive, sun-loving and an aromatic herb that thrives on embankments, roadsides, sea cliffs and in stony, dry fields. Several species of fennel are out there in the world that may be annual, biennale or perennial.

Interestingly, all parts of fennel may be eaten. The stalks may be eaten raw and fresh or cooked, depending on how you like it. Fennel is cultivated extensively for its culinary, medicinal and ornamental purposes.

Related: How to Store Fennel | Vegetables and Herbs for Symbiotic Farming | Types of Herbs | Types of Spices 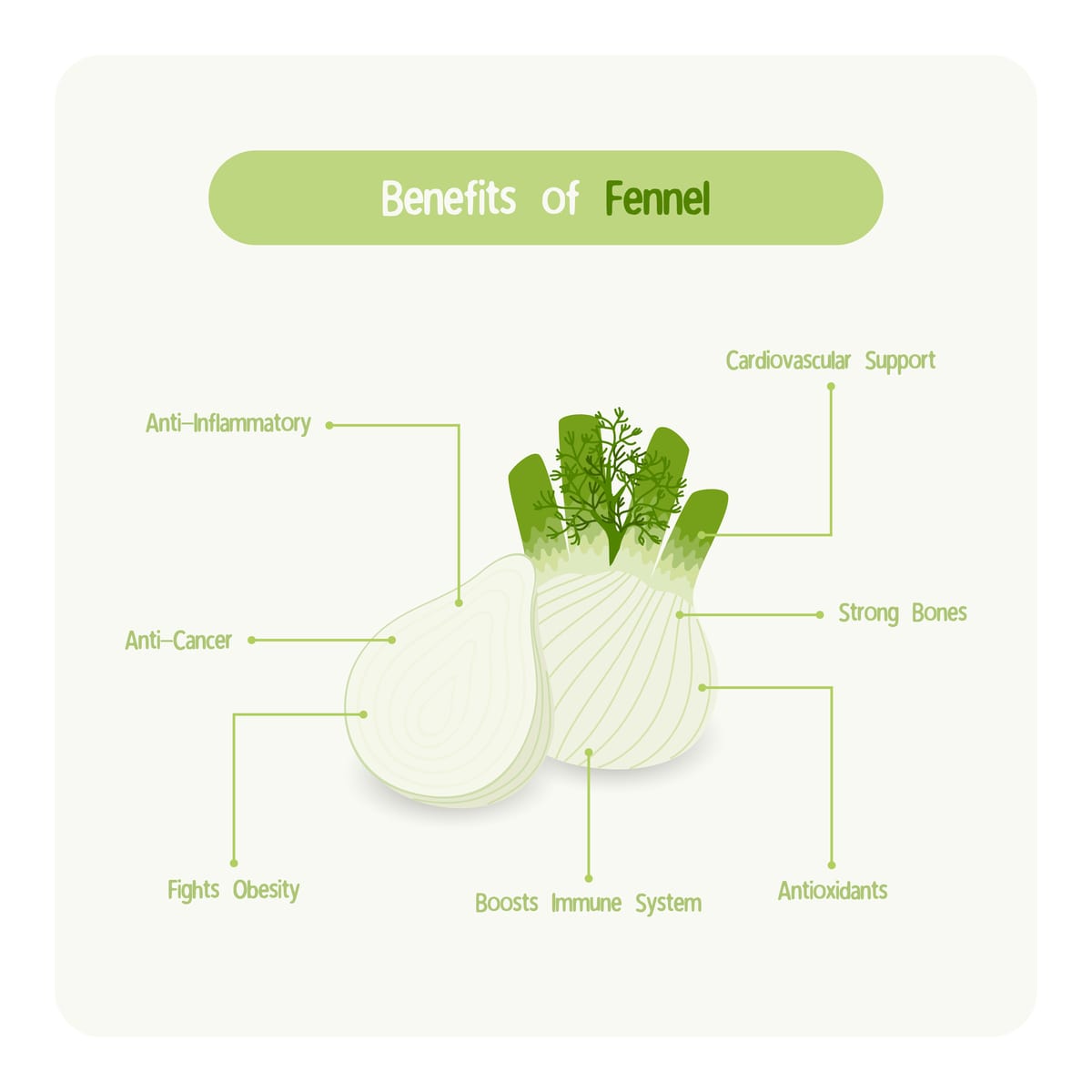 Fennel has a thick taproot that is spindle-shaped. Its stem is smooth or finely fluted and round. The stem may grow to be as tall as 6 feet (1.8m). The leaves of the fennel plant are finely divided having a number of thread-like segments. These thread-like segments grow to form a sheath that surrounds the stalk lying at the base of the stem.

The leaf segments are extremely delicate. They are blue-green in color with a licorice-like pungent odor. The flavor of fennel is like anise because of the presence of the characteristic phytochemical anethole. This phytochemical is a primary constituent of anise oil, hence, the similarity in flavor. The flowers of fennel tend to grow in clusters to form a large umbrella.

History and Origin of Fennel

According to Greek mythology, Prometheus, the one who is believed to have brought fire to mankind, concealed it in a fennel stalk. The followers of Dionysus, the god of wine, theatre, and agriculture, used a fennel stalk, capped with a pine cone as a wand. This wand was called the Thyrsus.

Different cultures have had different beliefs about fennel during their history. Some western cultures even believed that fennel can keep ghosts and bad spirits away. They used to hang it on their doorways and filled it in their keyholes.

In the 1200s, people of England used fennel as an appetite suppressant. They used it to help them get through days of fasting. Some 500 hundred years later, during the late 1700s, fennel became an important ingredient of patented medicinal elixir which was called absinthe. It became a popular drink after World War I in Europe and the United States among the Bohemian.

Fennel was introduced in North America for the first time by Spanish missionaries. They cultivated fennel in their medicinal gardens. It escaped cultivation from these mission gardens and grows freely in California as wild anise today.

Fennel is most popular in Europe today. Fennel seeds are used as a spice in cuisine all around the world. It has secured a place in modern kitchens because of its interesting flavor and the variety of forms in which it is available and its distinct health benefits.

There are two types of fennel. 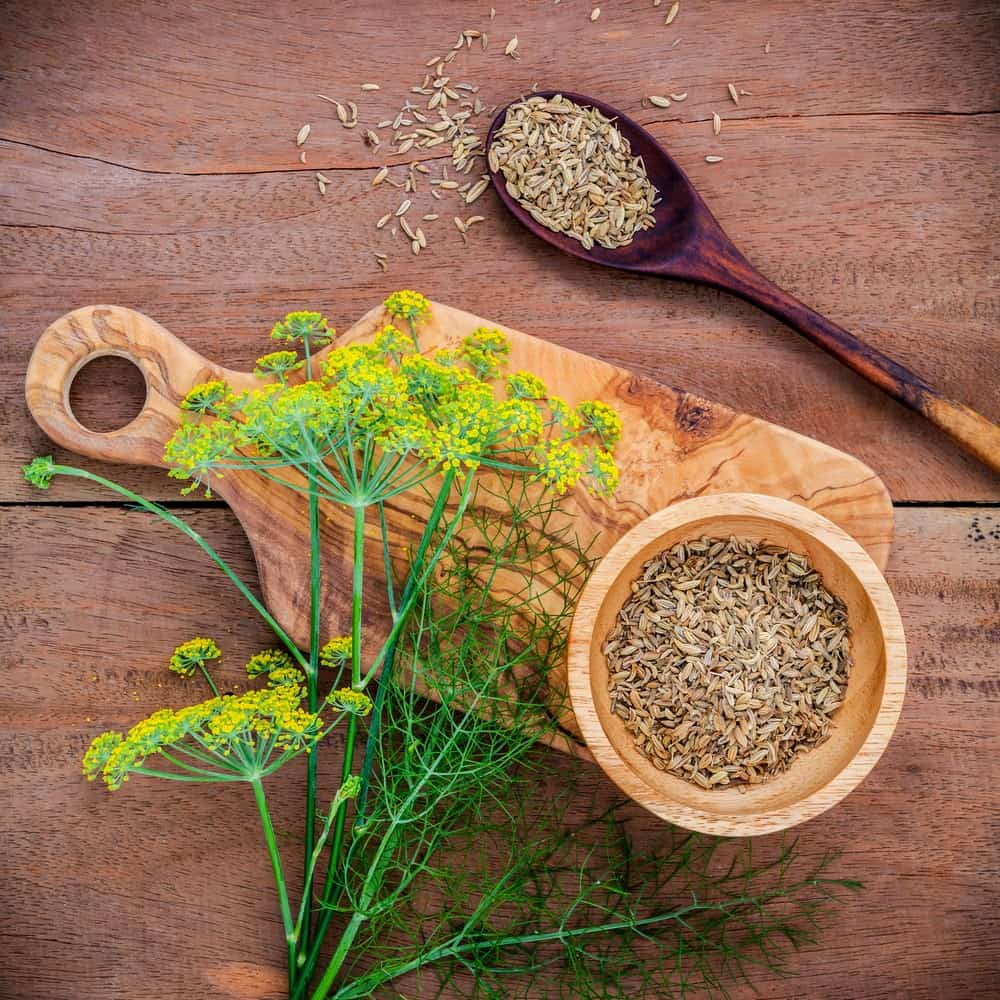 Herb fennel (Foeniculum vulgare) is mainly cultivated for the purpose of obtaining its seeds. It is also called sweet fennel. It is used as an herb for food flavoring.

Fennel herb plant can grow up to 3 to 5 feet tall. The foliage is feathery and is similar to dill, and all of its parts are edible. The herb is used in many soups, salad and fish recipes, and teas. Fennel seeds are also used in baked items, drinks, and desserts.

The clusters of yellow flowers appear in late summer. Leaves, stems, and seeds are harvested and used.

Sweet fennel is a hardy, perennial herb that has a sweet licorice-like flavor in its seeds, leaves, and stalks.

Some of the most popular varieties of herb fennel are listed below:

Purpureum – having purple colored leaves, Purpureum fennel is used as an ornamental 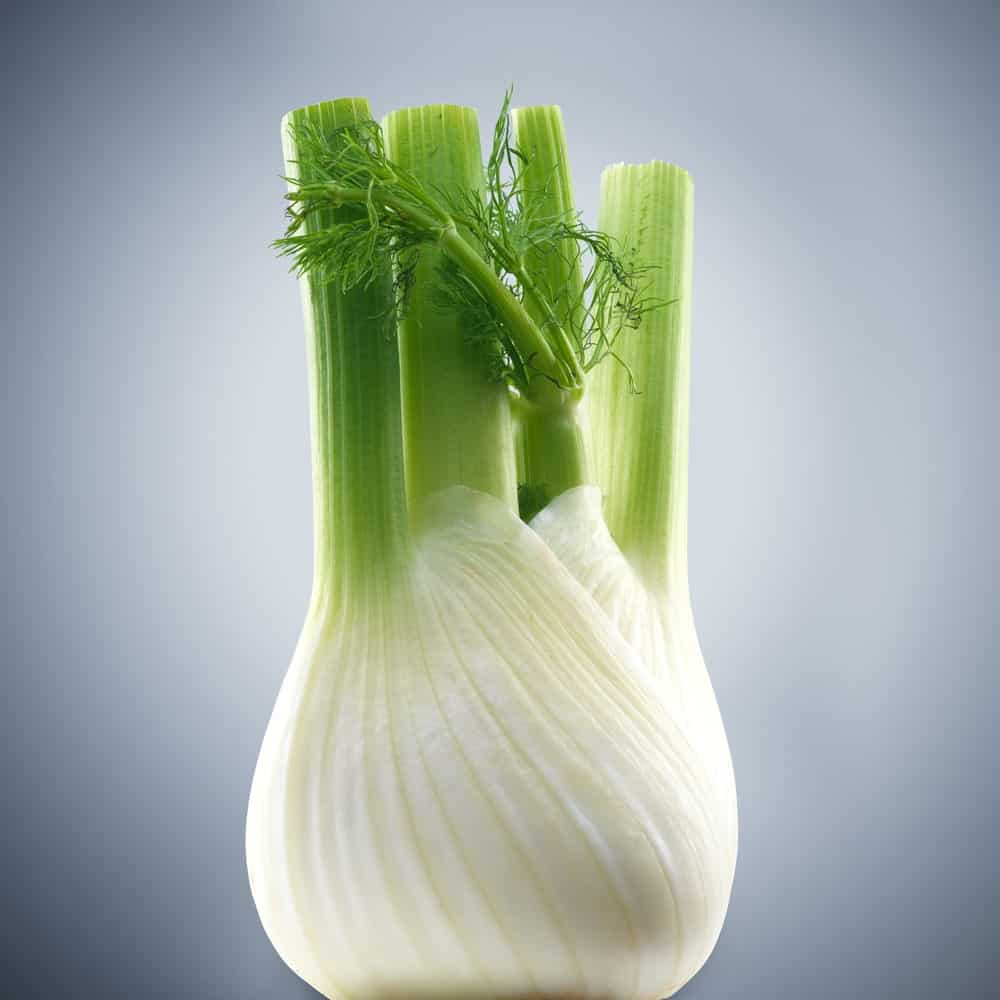 It is called Florence fennel or Finocchio. It is sometimes referred to as anise fennel due to its anise-like flavor. The appearance of vegetable fennel is bulb-like, with a thick rosette of petioles at the base of the plant. The plant is shorter in height as compared to the herb fennel.

Vegetable fennel is used in numerous recipes. The bulb is harvested before the blooming of the plant.

Popular Varieties:
Some of the most popular varieties of Florence fennel are listed below:

Both, herb fennel and vegetable fennel are grown from seeds. They grow best in locations that receive A full sun. They require a soil that is rich in organic matter. The soil conditions are relatively more important for vegetable fennel (Florence fennel) as they require uniformly moist soil for adequate growth of their bulbs.

For herb fennel, the best time to sow seeds is during the spring, when frosty season has passed. The best time to sow seeds for vegetable fennel is from mid-June to July. For optimal growth of bulbs, shorter, cooler days of late summer are the most suitable. As a result of warm weather, bolting or flowering of the plant occurs which greatly reduces the quality of the bulb.

Harvesting conditions for different types of fennel are different. Herb fennel can be harvested as per the need by simply cutting away the foliage. Foliage can be dried and stored for later use. If you need the seeds, you should wait for the plant to flower. When the flowers become brown in color, the plant can be cut. When you cut the plant, place it in a paper bag and hang in a cool, dry place. The seeds will fall into the bag which can then be collected.

Florence fennel, on the other hand, is harvested when the bulbs become the size of a tennis ball. The bulb is dug. The roots are cut and so is the top. Bulbs can be stored in a cool place for several weeks.

Fennel is rich in essential nutrients, including various vitamins and minerals. Fennel is considered as one of the world’s healthiest foods. Below are the nutritional constituents that are found in fennel:

Fennel is associated with numerous health benefits. Some major benefits of fennel on human health are listed below:

Fennel is rich in vitamins and minerals which help in building and maintaining the structure and strength of bones.

Fennel contains calcium, potassium, and magnesium which help decrease blood pressure naturally. Potassium plays a major role in dilation and constriction of blood vessels which is the primary mechanism of blood pressure maintenance. Nitrates that are present in fennel also provide vaso-protection as a result of which, blood pressure is lowered and heart is protected.

Fennel contains vitamin C, potassium, folate, fiber, vitamin B6 and other essential nutrients that are imperative for heart health. The lack of cholesterol in fennel is another added benefit of fennel on the heart.

Fennel contains selenium which is not found in a lot of fruits and vegetables. It improves the liver enzyme function and helps in detoxification of certain cancer-causing compounds. It can greatly reduce inflammation and decrease the growth rate of tumors. Vitamin c and Vitamin A present in fennel provide antioxidant effect can protect the healthy cells of the body from damage by free radicals. In addition, the folate present in fennel repairs the DNA and boosts synthesis of healthy DNA.

Fennel can improve the immune response of the body. Selenium that is present in fennel plays a role in stimulating the helper-T cells which are a vital part of the human immune system.

Choline is another component that is found in fennel. It helps in the maintenance of cell membrane structure, absorption of fat, the transmission of nerve impulses and reduces chronic inflammation.

The fiber content in fennel helps prevent constipation. It promotes a healthy digestive tract. Fennel can aid the treatment of diarrhea as anethole in fennel is a disinfectant. It has antibacterial characteristics. Therefore, the intake of fennel in diarrhea can be beneficial. It is also a very popular anti-flatulent. It is capable of easing flatulence effectively.

See also  What Goes with Tuna?

Fennel is rich in Vitamin B6 which plays an important role in energy metabolism. It breaks down nutrients like proteins and carbohydrates into simpler forms that are easily utilized for energy synthesis.

Fennel contains flavonoids which boost the production of estrogen which acts as a tonic and stimulant. Fennel seeds promote breast enlargement by promoting the growth of new cells in the breast.

Fennel is excellent for healthy, glowing skin. Vitamin C present in fennel is essential for collagen that is the primary constituent for the support of the skin. Moreover, Vitamin C is a well-known antioxidant that prevents sun-induced damage to the skin. Using fennel regularly can keep wrinkles away.

Fennel is a rich source of iron and histidine. Both of these constituents are extremely important for the treatment of anemia. Iron is the primary component of hemoglobin and histidine stimulates hemoglobin production.

Fennel has antispasmodic activity. Due to this quality, it can help in relaxation of muscles and reduce the discomfort that is associated with colic. Phytoestrogens are usually used for the treatment of colic and surprisingly, fennel has these heavy molecules naturally. Anethole, which is a constituent of fennel, is a source for these phytoestrogens. Further research is required to investigate this benefit in humans.

Side Effects of Fennel

Fennel is considered safe. It is not associated with any major, known side effects. However, if you observe redness on the skin, rashes, itching, or swelling, stop using fennel immediately. It is always better to consult the doctor to make sure there is nothing serious.

Fennel can make the skin more prone to sunburn. If you consume fennel on a regular basis, avoid exposure to direct sunlight or tanning beds. If you plan on going out in the sun, wear protective clothing, and apply sunscreen. If you are taking any of the below-listed medications, avoid the use of fennel as fennel may interactive adversely with them.

Always take medical advice from a physician before starting any of the above-listed medicines if fennel is a part of your diet.

Fennel is nothing less than a magic food. It is rich in useful constituents. It is a versatile item that can be used in a variety of food dishes. The culinary and medicinal benefits of fennel make it popular. All parts of the fennel plant are edible, be it seeds, bulb, leaves, or stem. It poses generous benefits to human health. It is a commonly used ingredient in different food recipes all around the world. But did you know how many benefits it was associated with? We bet it came as a surprise to you!