Feijoa is also known as pineapple guava. It tastes like a mixture of strawberry, guava, and pineapple. We rounded up varieties of Feijoa for you to check out. 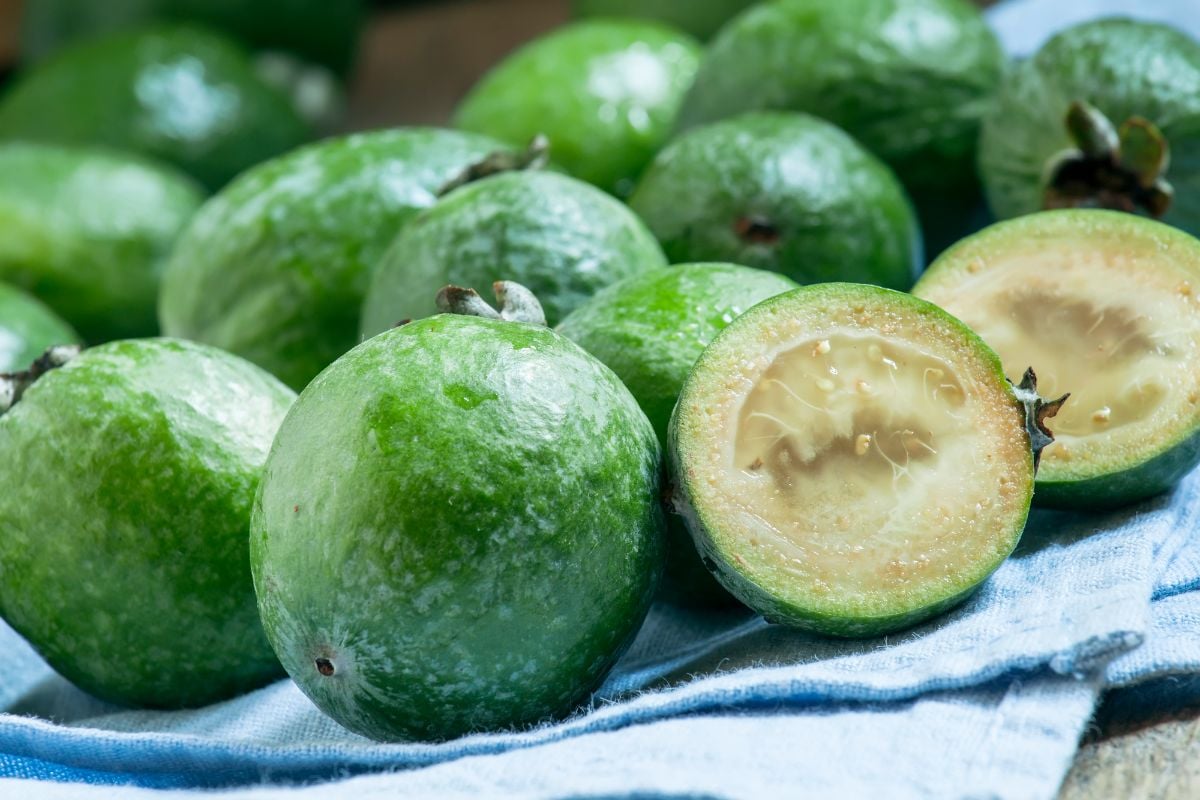 Feijoa, what are you exactly? This is a member of the myrtle family, and known as feijoa sellowiana. The feijoa is a fruit that appears gourd like or resembling a large green cacao bean. Opening up a thick skinned feijoa reveals a melon fruit that is full of five branched seed pods.

If I were to say what this fruit looks like to the unsuspecting stranger, it’s a big fig on the outside and a cantaloupe on the inside. See more about the types of feijoa on the market and what you can expect when eating these exotic fruits. 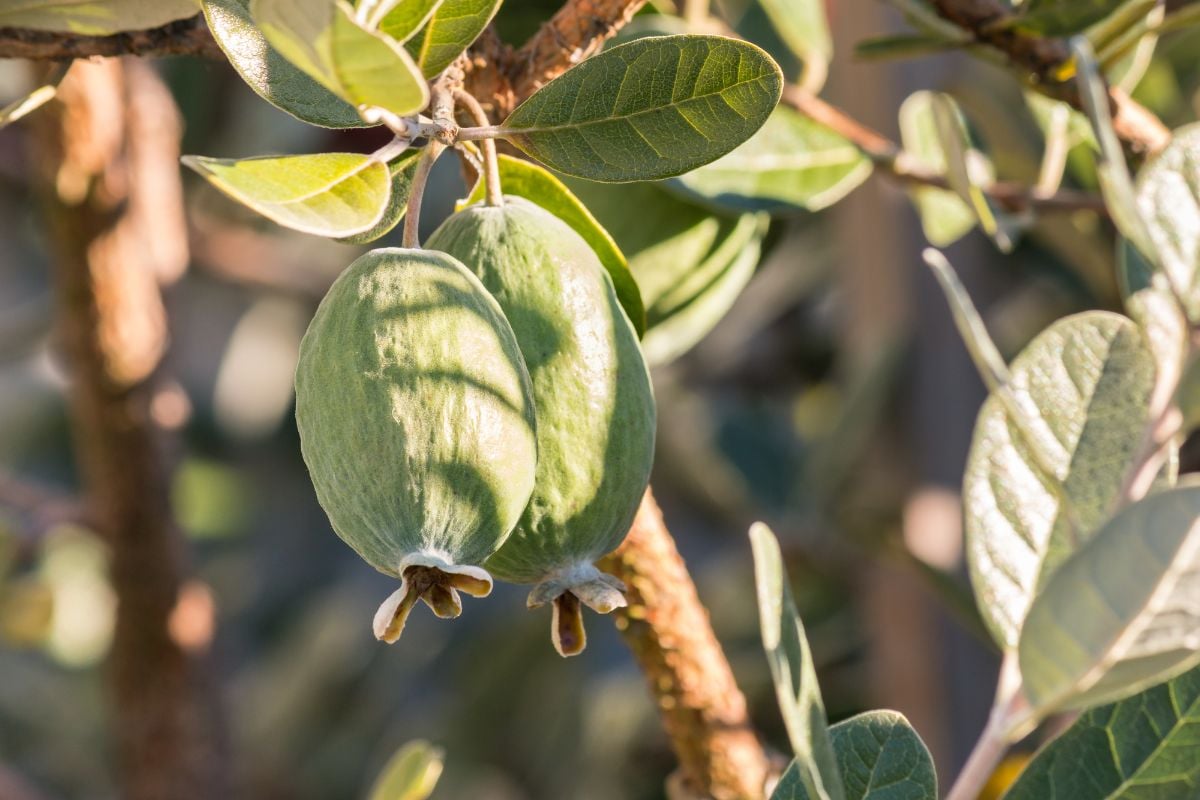 The first step in understanding and categorizing all of the types of feijoa on the market today–and there are more than a dozen–is the Latin names of the fruits. The fruit is of the genus Feijoa O. Berg and has the binomial name of Feijoa sellowiana O.Berg.

It’s of the Myrteae tribe and Myrtoideae subfamily. The feijoa is one of four clades of flowering plants to include rosids, eudicots, angiosperms, and tracheophytes.

Scientifically, this fruit is related to allspice, clove, myrtle, and eucalyptus. As a result, you’ll find that the feijoa is quite perfumed compared to most fruits. In fact, the fruit is used as an ingredient in makeup, both for its gritty texture and fine scent. Eating the feijoa reminds one of eating a guava or a fig.

There are two primary scientific names for the feijoa and this will help you when searching for a kind of feijoa plant or fruit. These include: 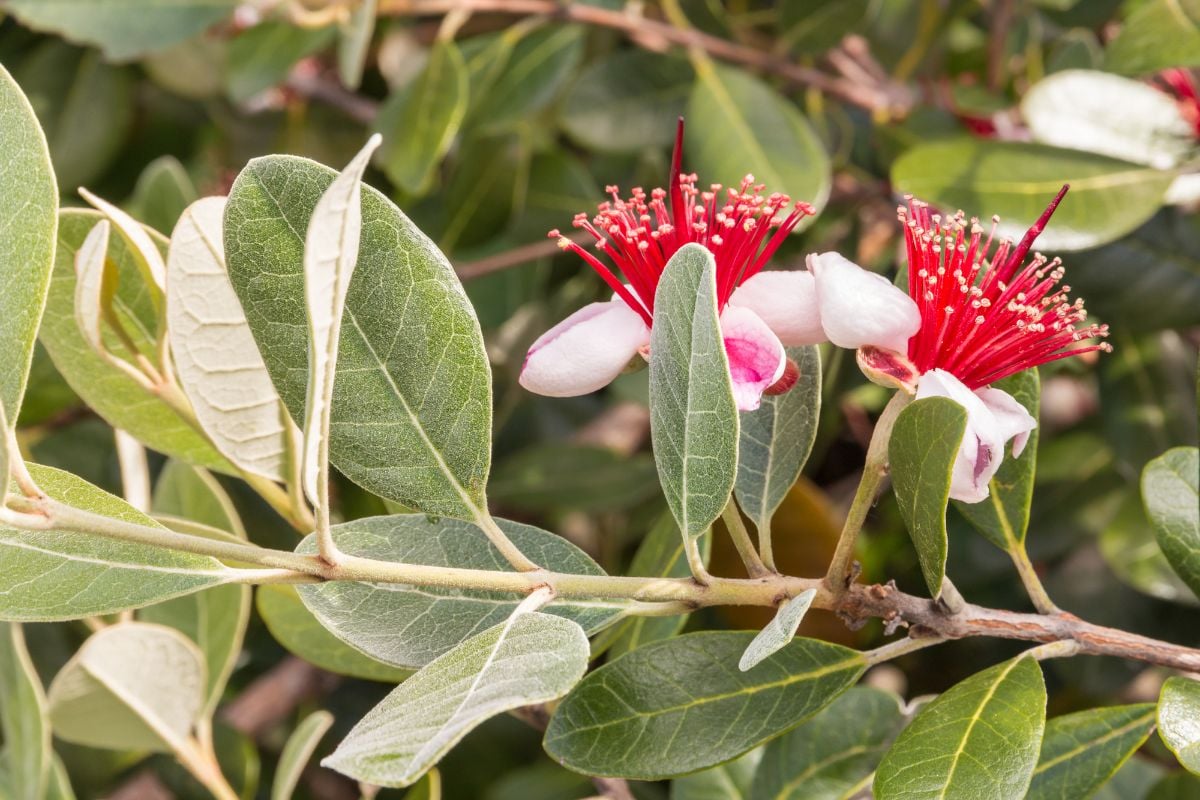 Acca Sellowiana is of South America and also called the pineapple guava. This fruit is also grown in New Zealand. Orthostemon Sellowianus O.Berg is another name for the feijoa, and more akin to the strawberry fruit. This version of the feijoa is a cross between that seeded red berry and a pineapple. There are several common names for the feijoa fruit used among nurseries and vendors when purchasing feijoa seeds, plants, or fruits:

In addition, there are many types of feijoa that are cultivated and developed in different countries and time periods. Here are several types of this fruit to seek out when you are tasting this delicacy for most consumers.

The Feijoa Anatoki is a variety that is patented by Google with the patent number USPP21614P3. The patent is by Roy Hart, and it covers the Acca sellowiana Anatoki variety of feijoa for New Zealand Plant Variety Rights. The Anatoki comes from the Apollo variety as a selective cross pollination. This variety of feijoa results in being larger than usual and weighs about 110 grams when fully ripe. This is but one of a few feijoa that has been patented by Hart. 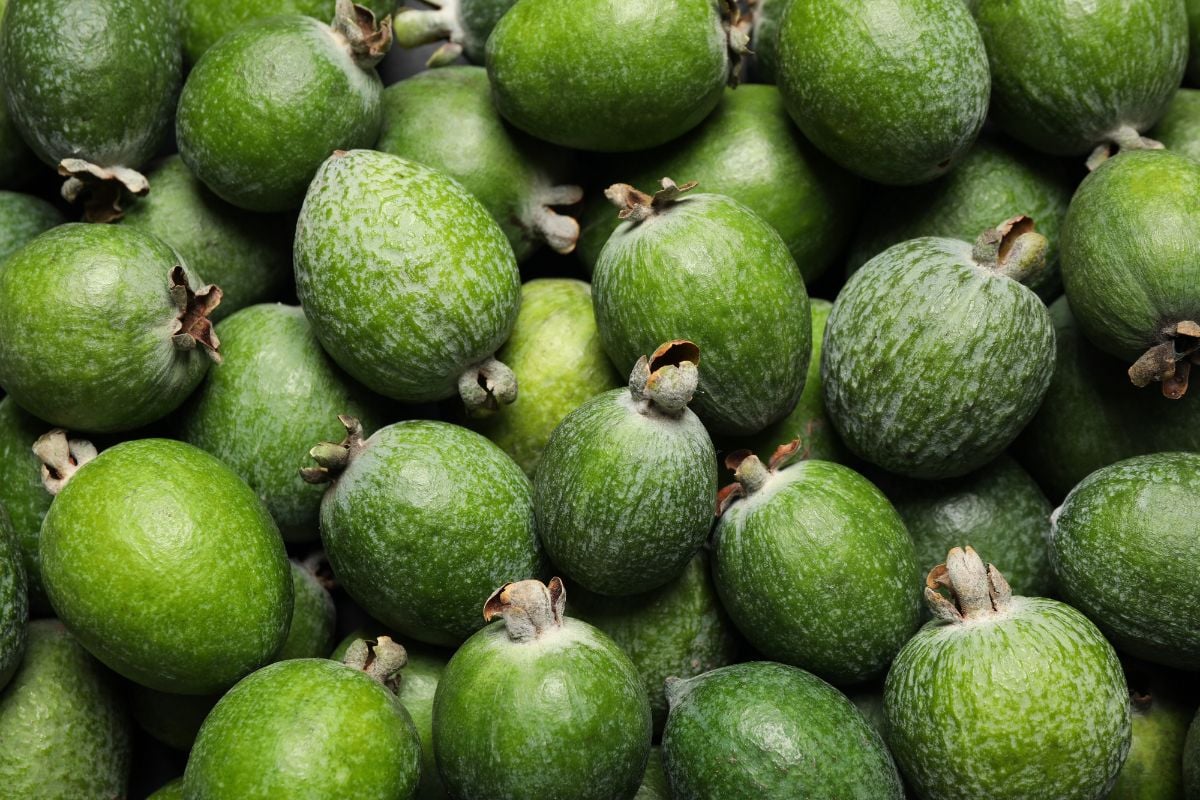 Highly prized for its succulent flavor, the juicy feijoa variety of Apollo is a favorite among vendors and growers. The fruit results in a medium to large size, and the Apollo plant will grow vigorously without constraint. The name alone makes the Apollo a popular selection to add to a market catalog for home growers and gardners. 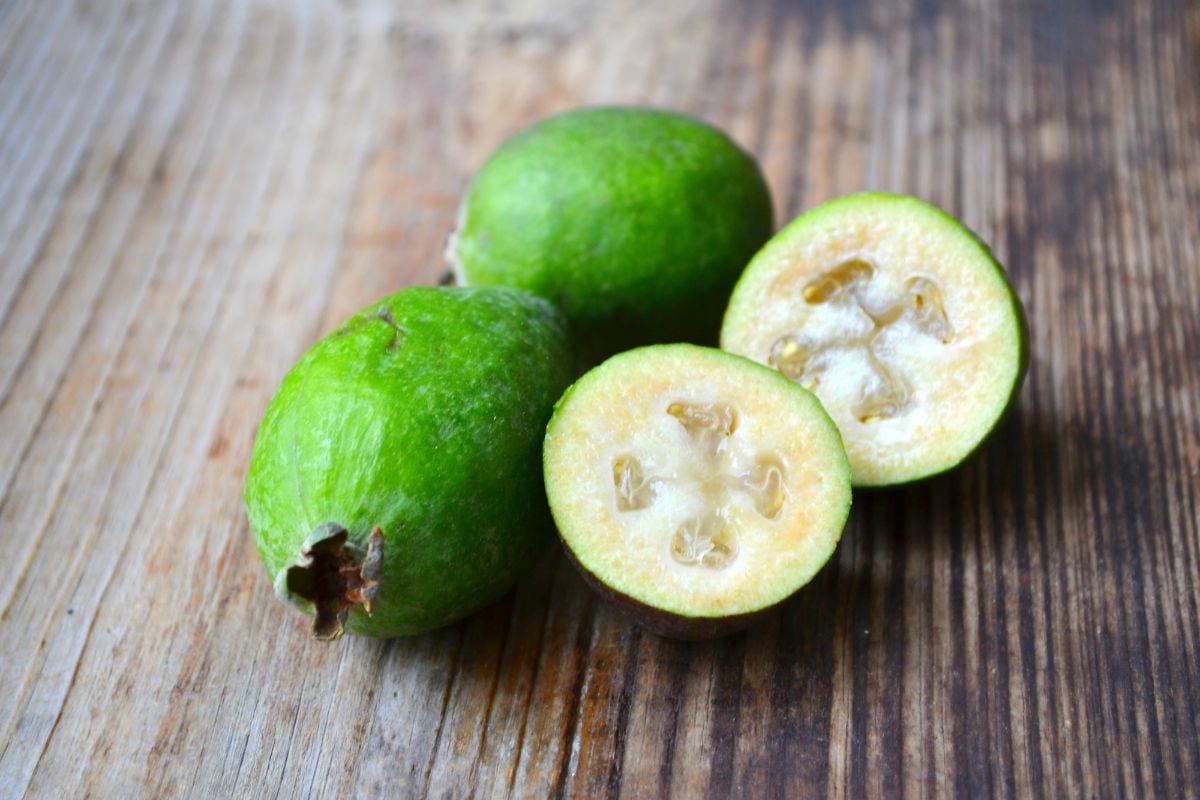 Bambina™ Pineapple Guava is a type of feijoa that is specifically cultivated for planting indoors. The dwarf plant variety can be grown in a pot in your kitchen, producing guava like fruits each fall. The wonderful smelling fruits also yield attractive flowers and tasty green leaves that are spicy and edible, as are the flowers. Adding these beautiful ingredients to your weekly menu will certainly liven things up a bit! 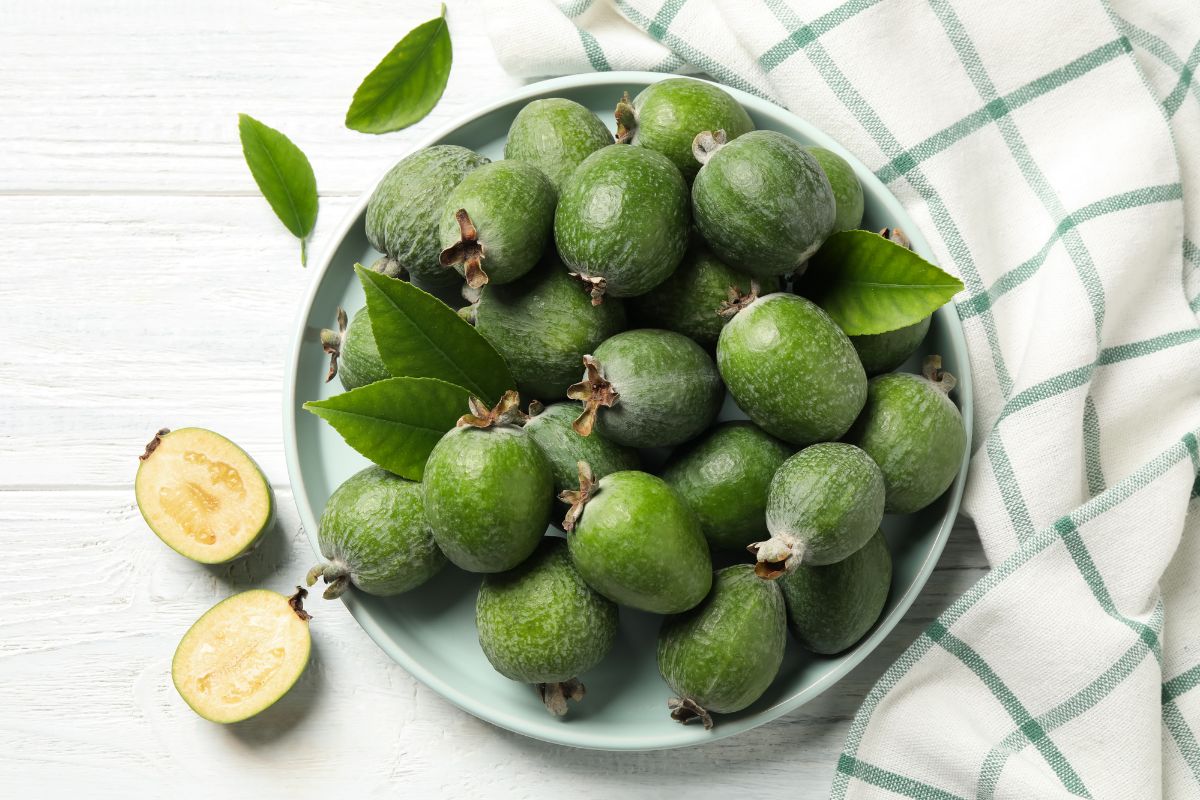 The Feijoa Den’s Choice variety is an interesting name for a hearty and juicy fruit. The smooth green exterior of this egg shaped melon type fruit makes this a popular pick at the markets. The fruit is strong in flavor but well balanced in acidity and sweetness. The size is medium to large, which is typical of a feijoa. If you are new to the world of feijoa, consider a variety like Den’s Choice.

The Feijoa Choiceana is an Australian variety of the feijoa that is unique in the size of the fruit. Here you get a small to medium size oval shaped fruit from the feijoa tree. This fruit was one of the earliest feijoa cultivated–dating back to 1908. Choiceana was cultivated with Coolidge and Superba from Australia, which adds to the allure history and complex flavor of this feijoa. 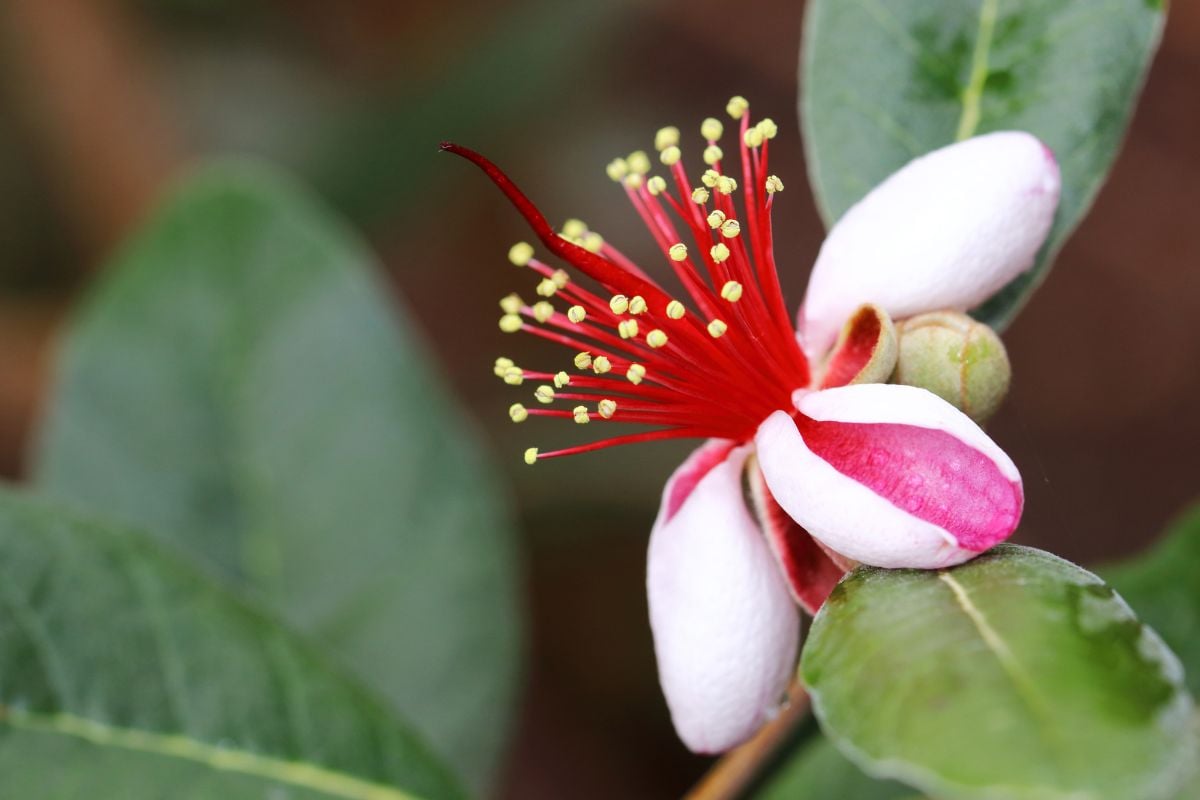 The Feijoa Acca sellowiana Coolidge is also known as the pineapple guava. When fully ripe, this type of feijoa has large fruit and edible flowers that are pink. This makes for a great cake or dessert showstopper or centerpiece.

As the name suggests, the Feijoa Edenvale Late is unique to the previous two versions of the Coolidge feijoa in one major way. This fruit is medium in size and not quite as large as the other two. However, the resulting fruit, which becomes ripe much later in January, is a welcome late addition to winter’s harvest for southern Californians. 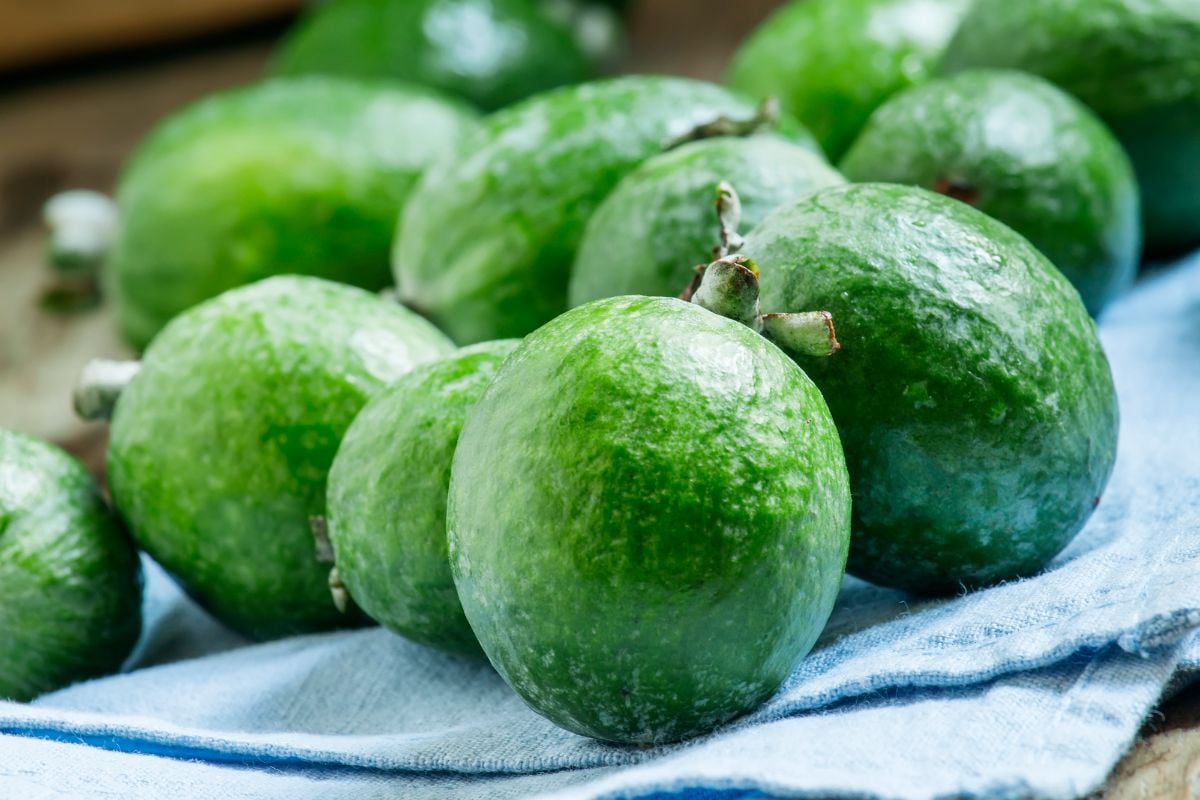 The third of the Edenvale varieties of this fruit is the Feijoa Edenvale Supreme. Here we have a variety that is not too late and not too early, becoming ripe in November. This type of feijoa is also a pineapple guava variety that is medium in size when fully ripe.

Another of the large varieties of feijoa, the Gemini is a popular type of this fruit. The plant is easy to manage thanks to cross pollination, a high yield, and a hardy determination. 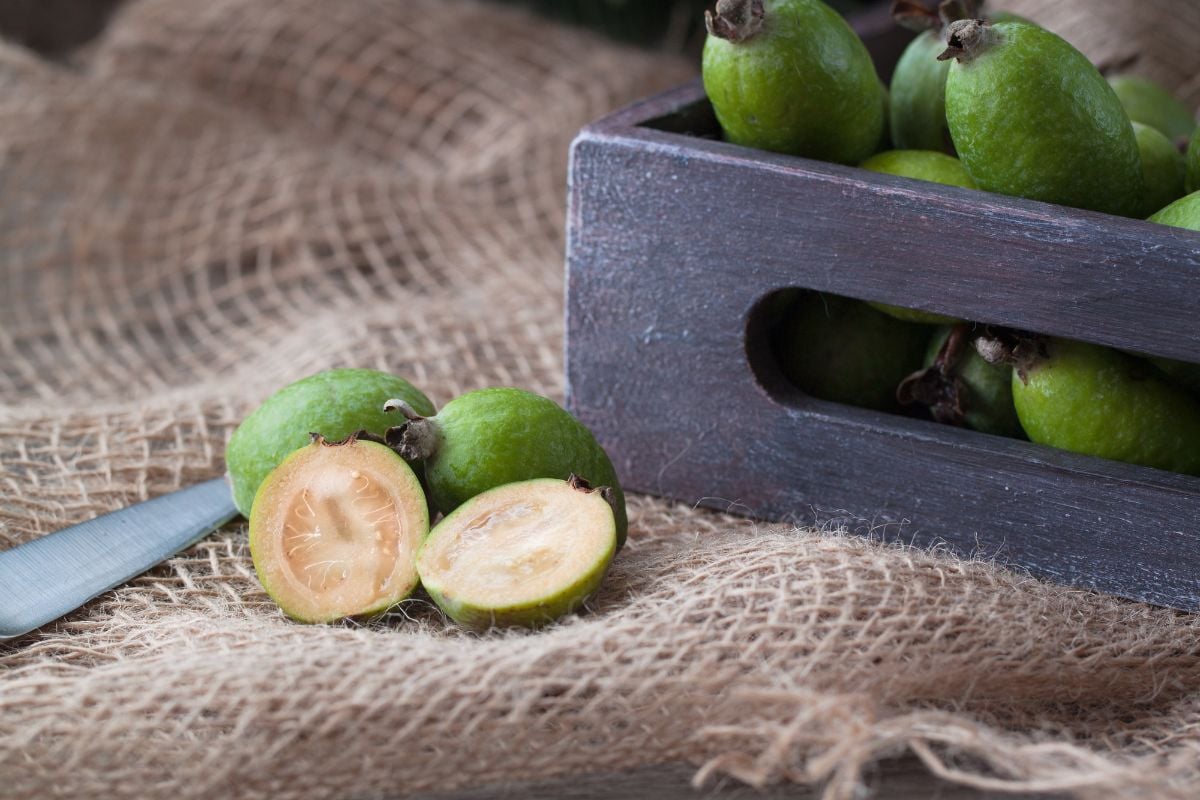 Also patented is the feijoa Kaiteri, as USPP22275P3. This is an Acca sellowiana variety of feijoa that is from New Zealand. The fruit from a Kaiteri plant is large in size and ready for harvesting in April (on or after the 4th), and in Nelson, NZ specifically. The patent is also by Roy Hart.

The Feijoa Kakariki is a variety of this fruit that was developed in New Zealand. It is a large size feijoa and was named after the Maori word for “green.” 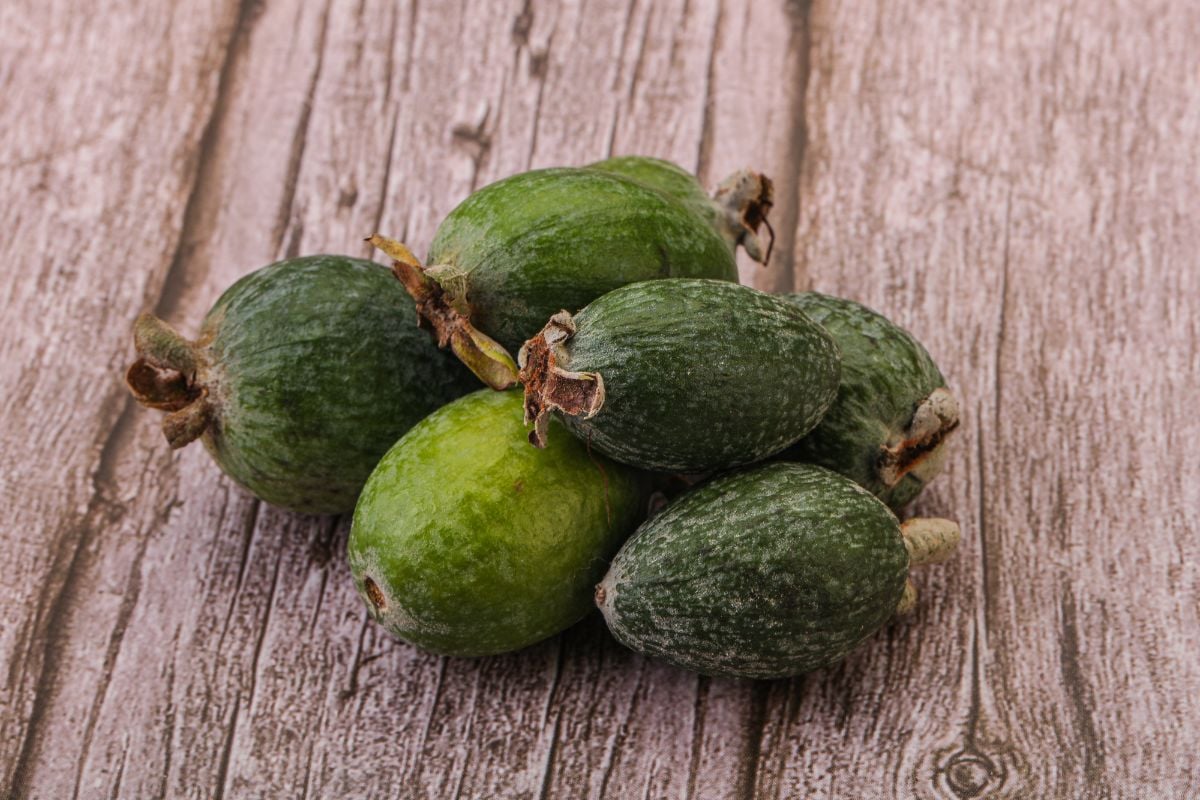 One of the biggest producing feijoa trees comes from the variety called Mammoth Feijoa. This is a part of the Acca sellowiana varietal and also referred to as a pineapple guava. The Mammoth Feijoa comes by its name honestly, and produces fruits that weigh up to half a pound each.

The Feijoa Moore is a large fruit in the feijoa family tree, as well, with fruits that are about the same size as a Mammoth Feijoa. This is another one of the southern California varieties of the feijoa fruit. Also called the pineapple guava, this large feijoa is well flavored and fragrant. 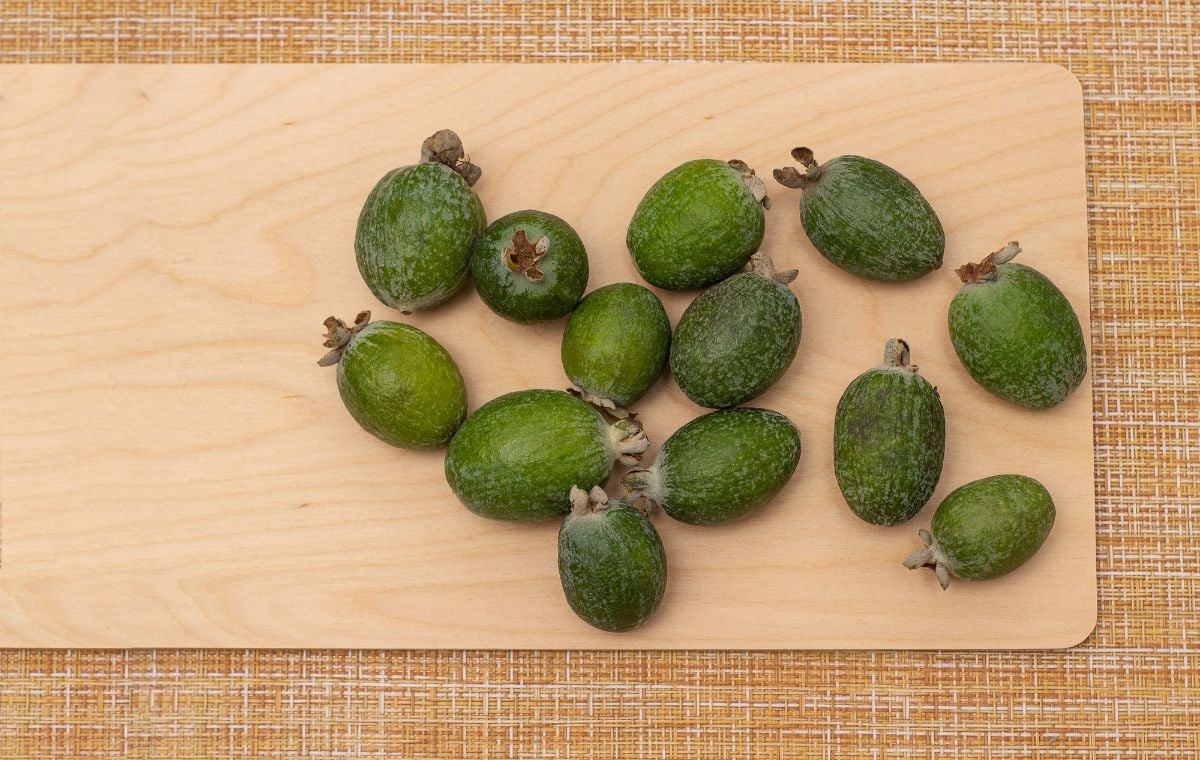 The Opal Star variety of feijoa produces smaller than usual sized fruit. A compact tree for a feijoa, this type of plant is great for home gardeners and indoor gardening. The Opal Star is sought out for its strong flavor profile that is complex yet tasty.

The Feijoa Pineapple Gem is a popular home grown variety of this fruit tree. The feijoa variety of Pineapple Gem was cultivated in a similar way to Apollo and Coolidge, making it a common choice in nurseries. The resulting fragrance and oils that are distilled from the Feijoa sellowiana flowers are used to make tonics, such as a polarity essence for balancing one’s chakras. 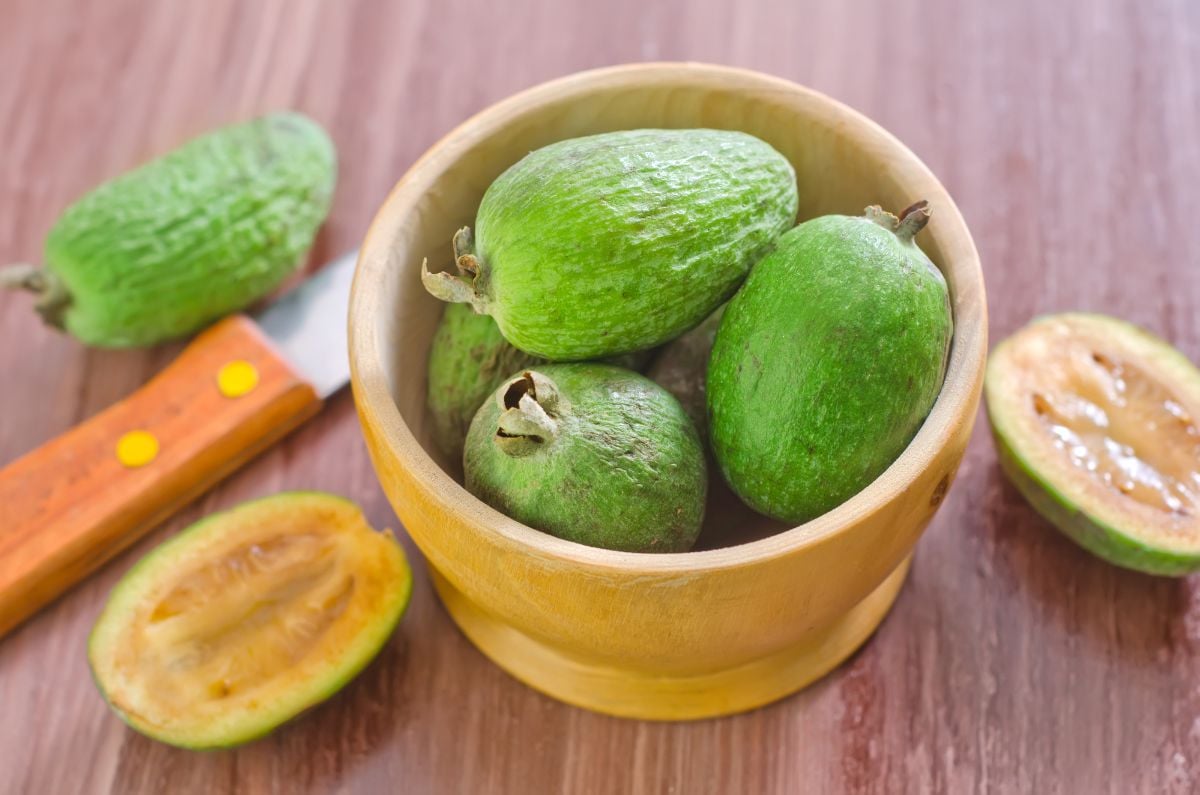 The Feijoa Smilax is a smooth variety of the feijoa. A fully ripened fruit is spherical in shape and mid sized, making it an excellent choice for the markets. The finishing shape and size are well suited for new consumers of the fruit who might be anxious to purchase a larger and more expensive feijoa.

Also known as the Pineapple Guava, the Feijoa Trask is of the Acca sellowiana genus of feijoa. The fruit of the Trask Feijoa is distinctive and aromatic, as with other varieties of this fruiting plant. 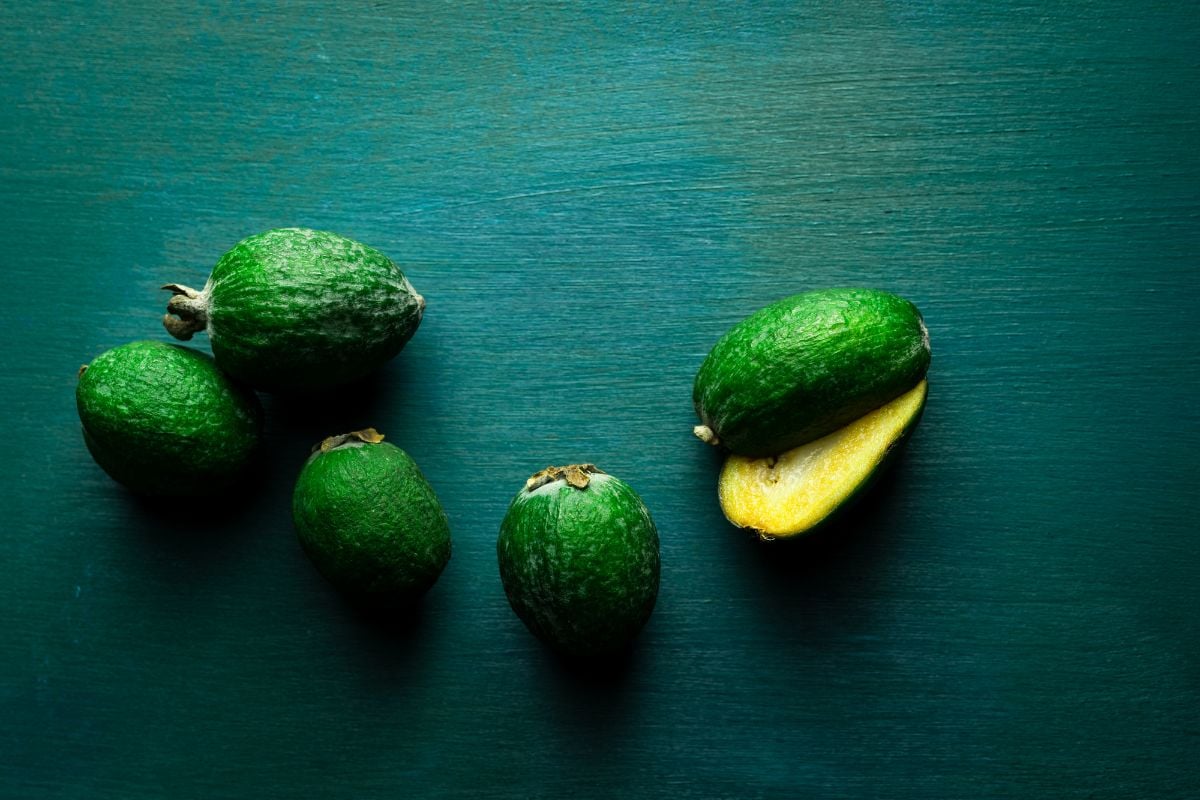 The Feijoa Triumph is part of the acca sellowiana varieties of feijoa. When grown to full adult size, the Triumph species of feijoa grows to be an average weight and size. The resulting fruit is prized for its flavor and has a firm skin and soft flesh.

The Unique Feijoa hails from a New Zealand borne cultivar. The feijoa from New Zealand was developed according to the specific needs of the local environment. Therefore, the Unique Feijoa is particularly tolerant to growing in hard packed clay ground. This plant type of feijoa is also self pollinating making it more favorable for commercial cultivation. 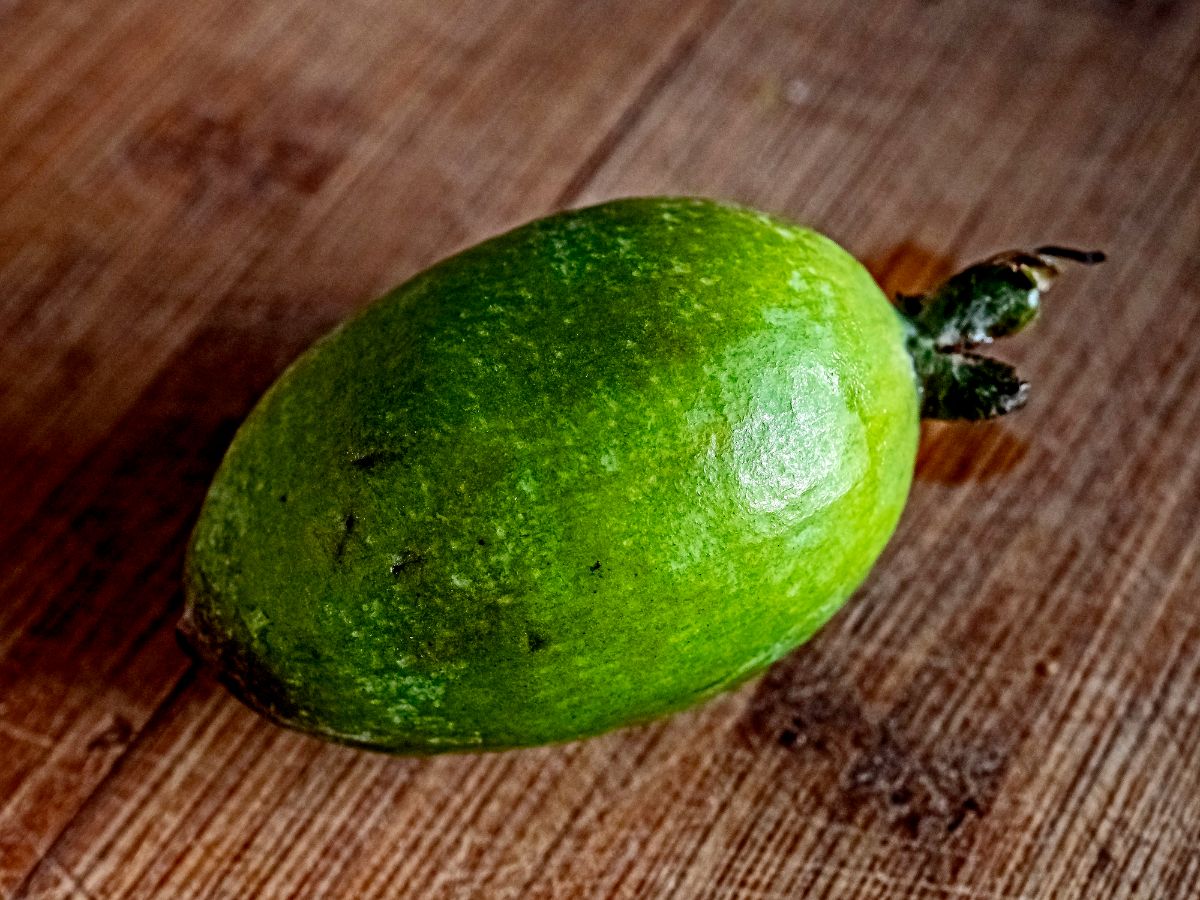 The Vista Long Feijoa is a type of the feijoa that was developed in a cultivation nursery in Vista, California, thus the title of the fruit specimen. This particular feijoa has a longer oblong shape compared to the traditional feijoa fruit from Brazilian cultivars. 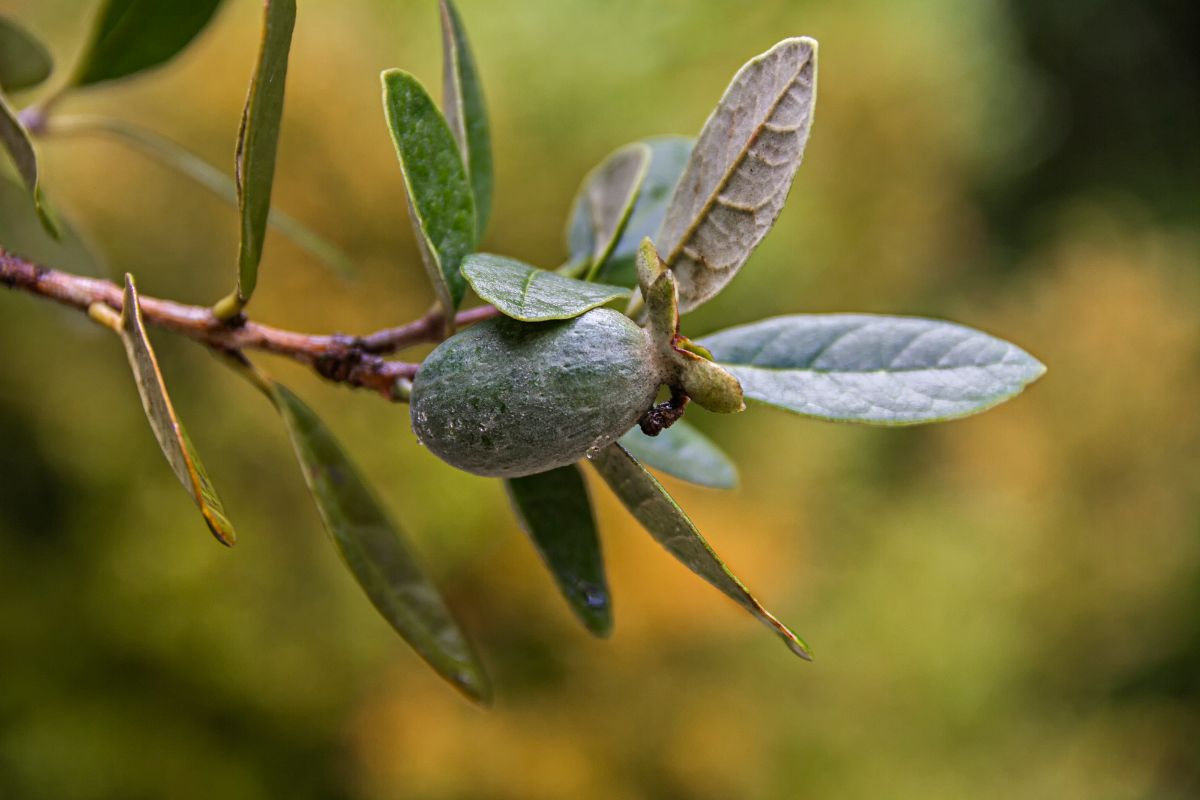 The Feijoa Wiki™ Tu is an Acca sellowiana varietal of the feijoa fruit. This version of the fruit comes from a dwarf growing tree that reaches only 2.5 meters and is slow growing. The result is a mid-late season fruit that is firm in texture and sweet yet meaty. The fruit is also partially self fertilizing, which helps when harvesting it for planting a crop.