Be familiar with the different types of fans and choose the best type suited for your home. Fans come in various shapes, styles, and sizes, and it’s important to get the right kind. 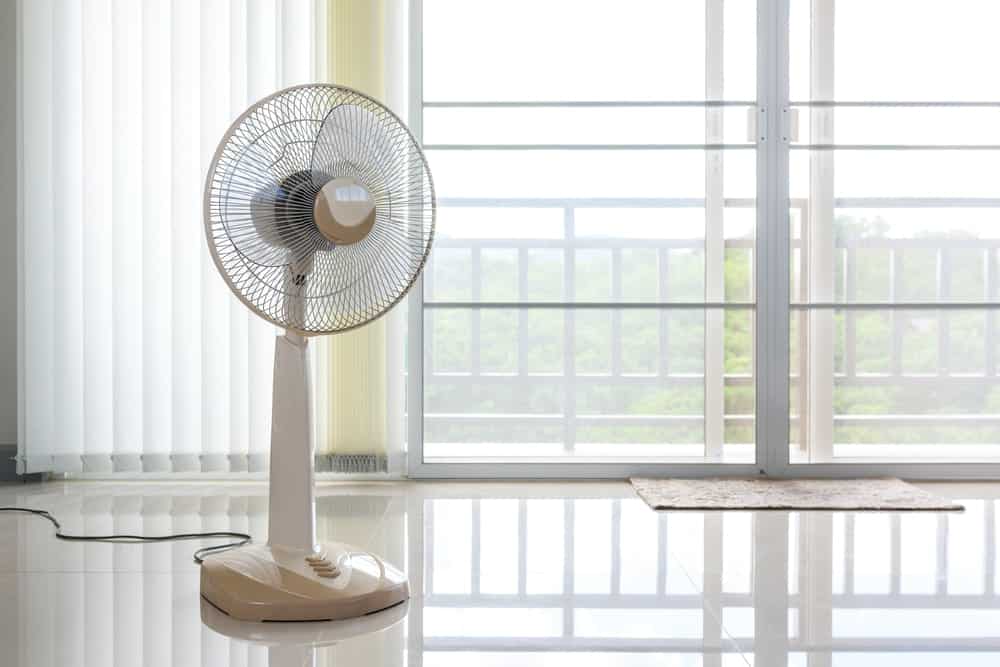 Best known as the basic, functional devices used for cooling purposes and dissipating heat, the use and existence of fans date all the way back to 3000 B.C. According to a few pictorial records and evidence from that time period, the Greeks, Romans, and Etruscans used fans as great ceremonial and cooling devices. On the other hand, records from Chinese literary show that their people used to associate fans with historical characters and ancient mythical beings.

The first type of fans ever introduced to the world was the European folding fans that were regarded as a status symbol and were especially served for the noble and the Royals.

The Evolution of Fans

Starting from the simple folding fans and gradually turning into electric powered fans, these cooling appliances have undergone a great evolutionary period.

During the dark ages, the screen fan, also known as “pien-mien” was the most commonly used type of fan in China.

Folding fans and fixed pans were commonly used during this period, which resulted in the 17th century being the time for the development of folding fans.

Folding fans were still in great use, accompanied by printed fans that were cheaper to purchase and manufacture.

The twentieth century saw a great number of advertising fans followed by the use of feather fans.

While the use of decorative fans is no longer seen or observed, the kind of fans used in today’s times are just the ones required for cooling and heating purposes.

You may only know about ceiling fans and table fans since they are two of the most commonly and popularly used fans in most households. However, there is a vast variety of other different types of fans, from which most of them are used in houses and others are often found in factories and warehouses. 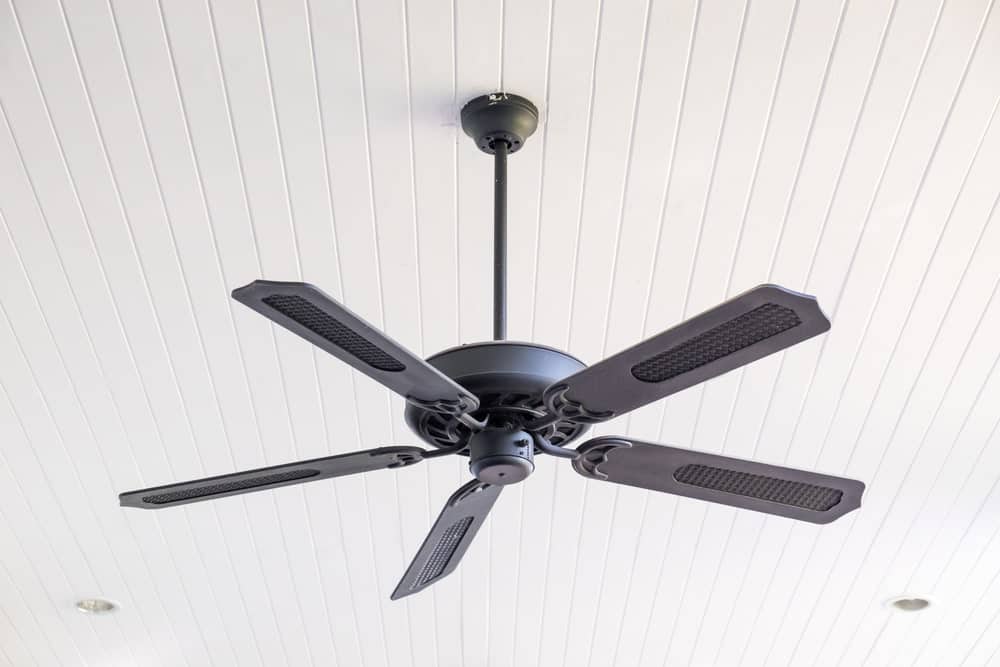 This is the standard and the most commonly used fan that you will find in most households. It is described as a mechanical fan that is usually powered through electricity and mounts from the ceiling of a room.

These fans typically consist of hub-mounted rotating that help circulates and spread around air evenly. Since ceiling fans are suspended into the hair from usually the middle of the room, the air is equally transferred in the entire space or the room.

The use of these fans dates back to 500 B.C and they have primarily originated from India. Back in the days, ceiling fans were operated manually with the help of a cord. After that, during the 1870s, rotary ceiling fans were introduced in the United States where the fans were run with the help of a stream of running water. Interestingly, some rotary fans still exist in today’s time and can be found in some parts of the southern United States.

Finally, in 1882, the electrically powered ceiling fans were invented by Philip Diehl. Each of these fans consisted of their own self-contained monitor unit that helps them run with electrical power.

In terms of usage, ceiling fans only move air and help in both heating and cooling with the help of their reverse-mechanism for the air direction. 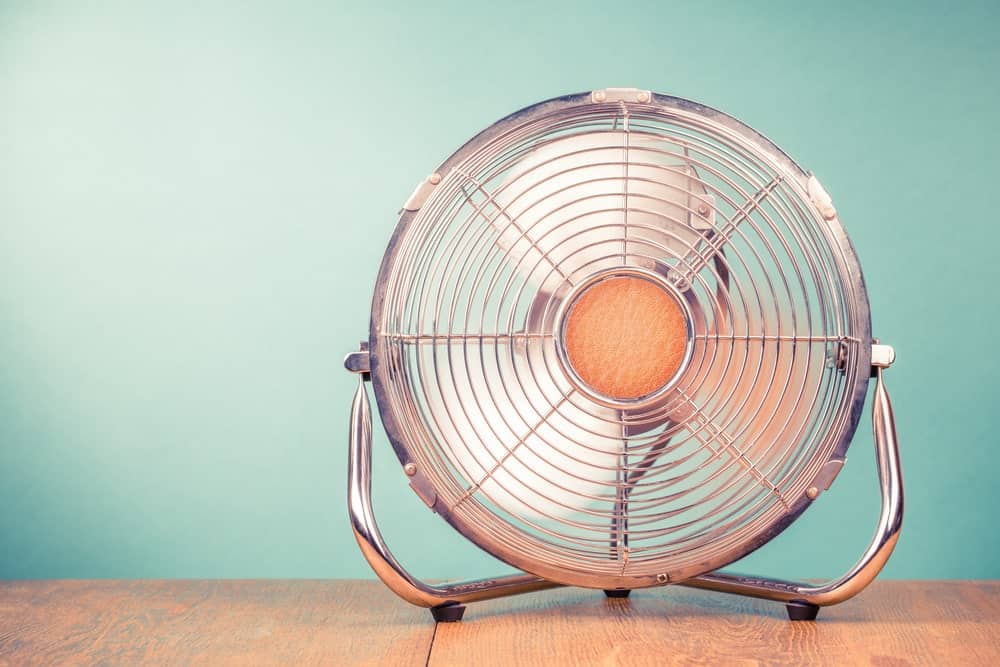 After ceiling fans, table fans are another highly popular and preferred fan options by most people. You can place table fans either on the table or even on the floor; all it needs is a firm, solid base. They are compact in size, convenient to use and also super portable.

Table fans are also electrically powered and have a motor unit running inside them. Many people prefer using table fans, considering their economic needs, the flexibility of usage and durability.

One of the biggest advantages of these fans is that they come with gadget control. Since the design and technical aspects of these fans are always being upgraded, they tend to offer increased convenience and ease-of-use. In today’s time, several fan companies are manufacturing high-speed table fans with their own, separate remote-controlled devices. This feature helps the users regulate the direction and the speed of air as per their requirement. Furthermore, these fans ensure a wider reach and a more equal distribution of air due to the fact that they provide air ventilation in a horizontal manner. 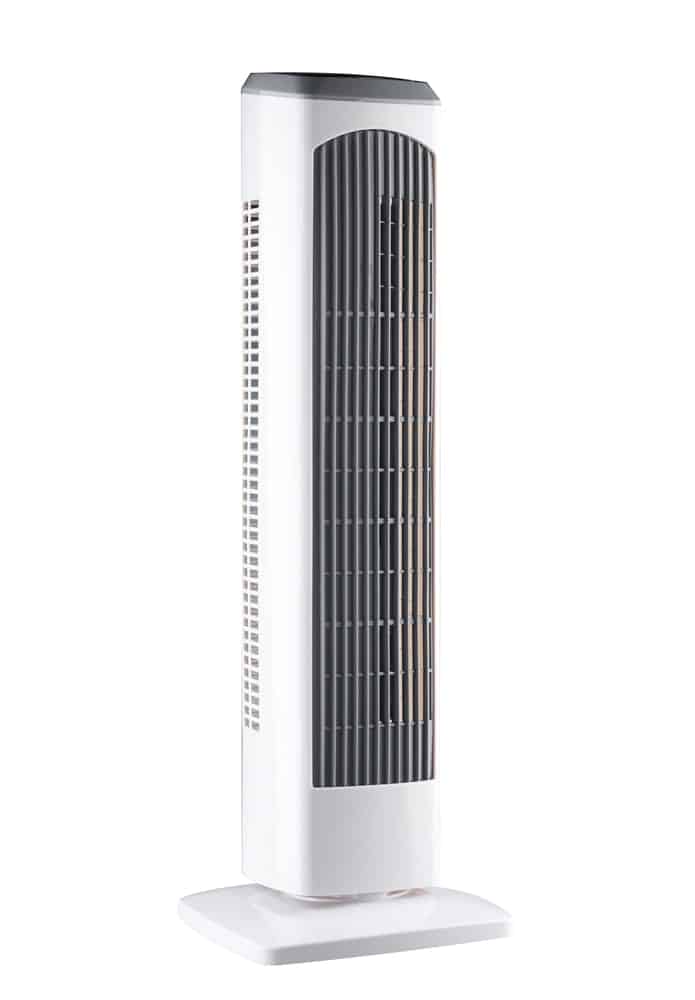 As the name suggests, this is a fairly tall, narrow, tower-like fan that usually comes in very sleek and compact designs. Tower pans are considered to be cooling appliances that come with a rotating base. They also have in-built ionizers that aid in the purif8ication of the air.

Tower fans cover a large area since they blow air at a 90-degree angle. They also contain inlets on the sides of the machine that allow them to pull in outside air.

They have a simple fan mechanism consisting of cylindrical blades for the ideal kind of air delivery process. Compared to an air cooler, tower fans consume less power and they simply circulate the indoor air. This makes it really different from an air conditioner, considering how it doesn’t cool the air but simply encourages air flow.

A great advantage of using tower fans over normal electric fans is that it takes really less amount of space, making it super lightweight and extremely portable. 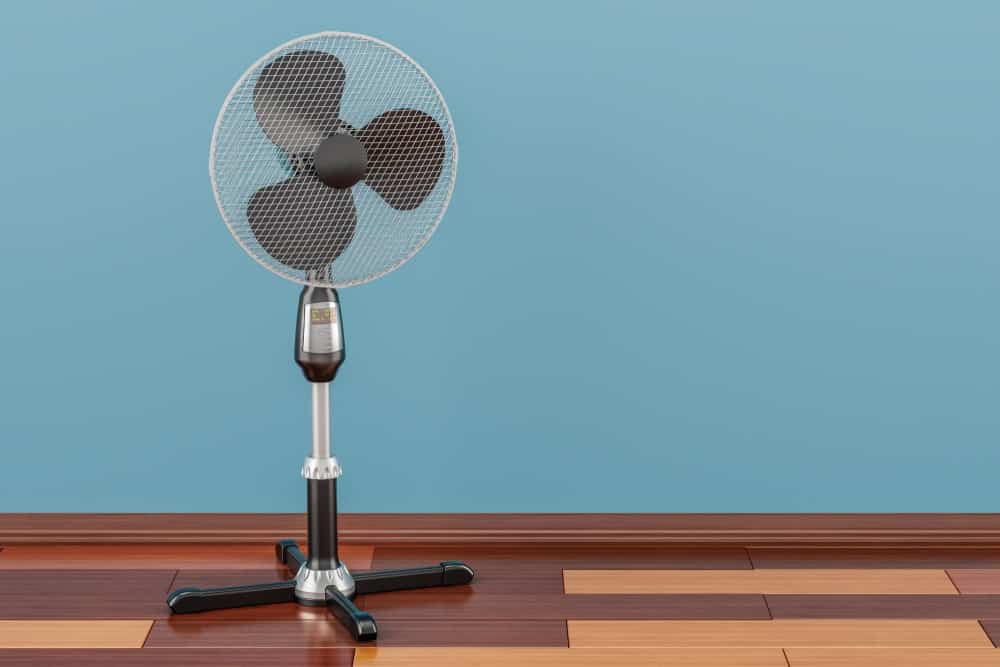 These are best known for their powerful cooling abilities and their increased versatility. Pedestal fans are described as electric, oscillating fans that operate with the help of a detachable stand that can be adjusted as per your needs and requirement.

These are also called “stand fans” and are incredibly tall n their height. They are manufactured with an inbuilt oscillation feature that greatly helps in maximum distribution and transfer of the air. They are also super lightweight and portable which means that unlike ceiling fans, they can be easily moved around and simply turned on by plugging the switch in the socket.

Another excellent advantage of pedestal fans is that they are multi-functional and most modern pedestal fans come with a remote control features that help you control the speed and direction of the air while just sitting in one place. 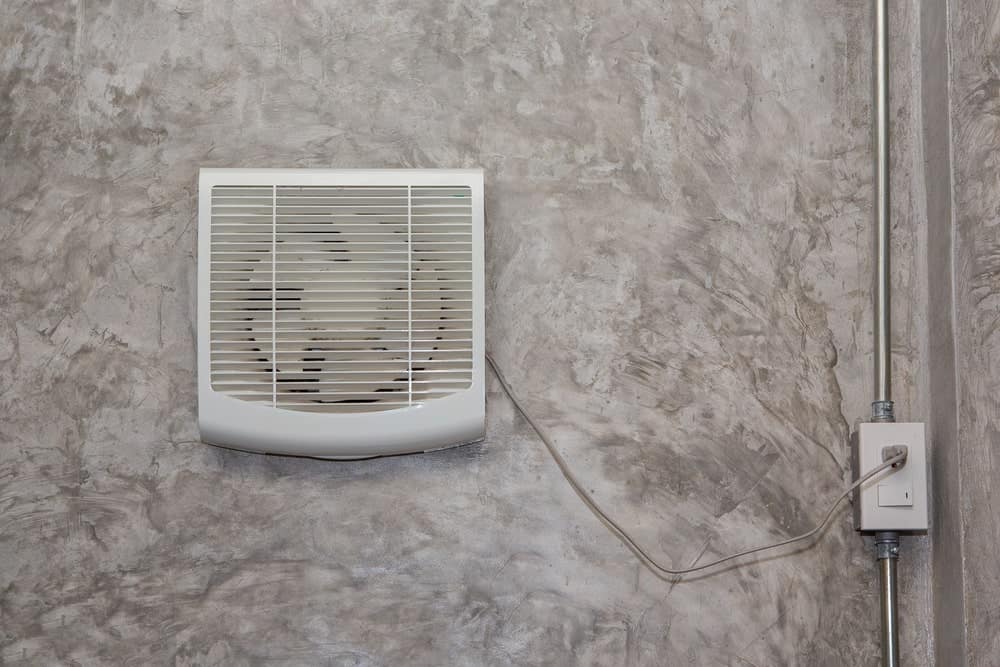 You will typically find exhaust fans in most people’s bathrooms because their prime purpose is to provide ventilation. These fans also purify the air from pollutants and prevent excessive heat from building up.

Exhaust fans usually operate through electricity. Their procedure is almost similar to any other fan, except that an electric current passes through the entire system that propels the operation of the machine. This causes the fan’s blades to start moving and ventilating the air all around.

The blades in the exhaust fan rotate at a very high speed and this rotation pulls all the hot air of the room or bathroom towards the fan which is then released outwards. In turn, cool and fresh air from outside start to fill up the room when you’re using an exhaust fan.

There are different models of exhaust fans that also have a thermostat in their systems. The thermostat basically helps regulate the temperature in situations where relatively high temperatures have filled up inside any room or space. 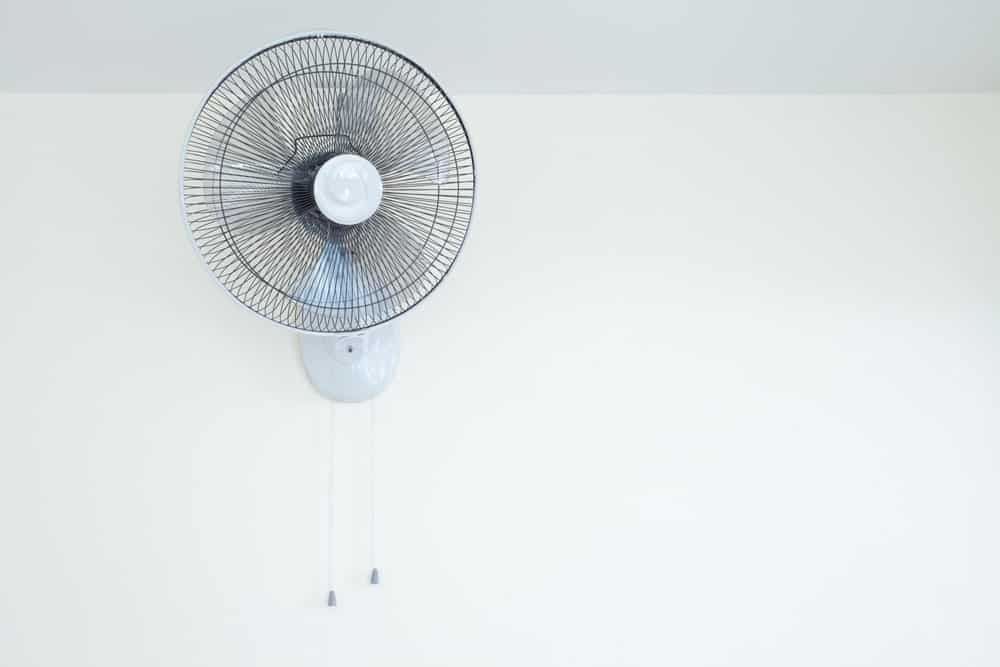 When floor space is an issue, wall mounted fans come to your ultimate rescue! These are designed for compact and tight spaces that have a really low or high ceiling and also don’t consist of proper wiring.

Wall mounted fans are ideal for small offices, auditoriums, huge party halls, as well as warehouses. They also have a quite different operation and functioning systems compared to the standard ceiling fans. These fans simply push air throughout the area where they are installed. On the other hand, ceiling fans circulate the air by pushing it down.

The top three benefits associated with wall mounted fans are: they save a lot of floor space, they pave the way for instant evaporative air movement and lastly, these fans greatly help circulate air conditioning.

A few common features of wall mounted fans include the remote control option, oscillation, the ideal size, lightweight and durable, and the multiple speed settings on the fan. 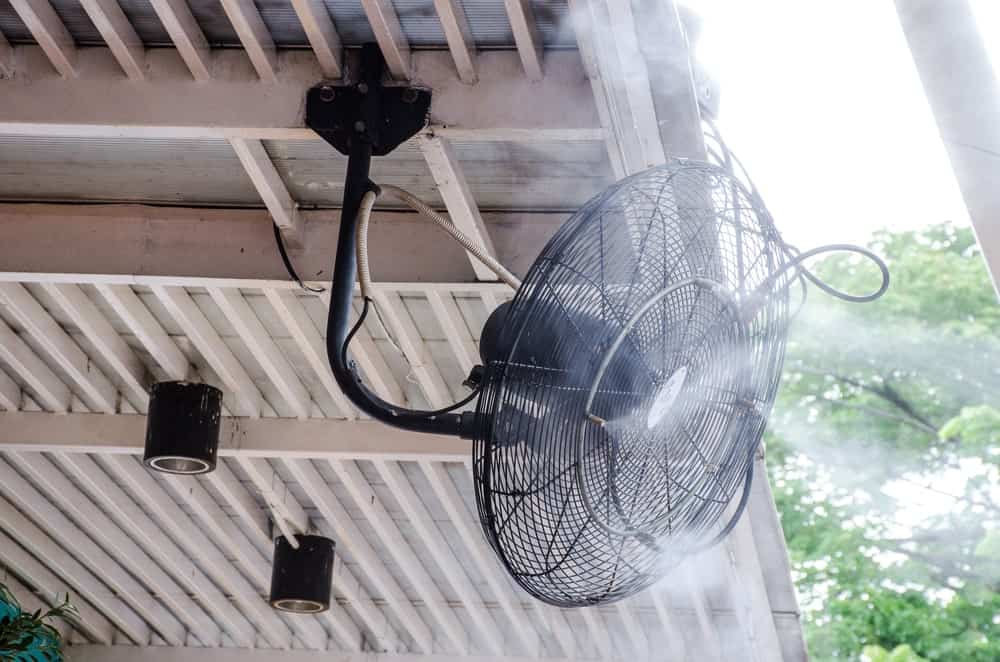 If buying an air conditioner doesn’t seem possible, perhaps, invest in a good quality misting fan. These fans are a great way to when you need to blow off heat and cool off during intense summer periods.

Interestingly, misting fans need a supply of water that is squirted out in the form of mist through high-pressure pumps that are contained within the fan system. The mist is then circulated all around the area where it gradually mixes with warm air.

The high-pressure water pump in misting fans is coupled with a powerful blower, together which results in super-efficient cooling of both indoor and outdoor spaces. The best part is that the mist that these fans produce is so light and fine that you won’t even feel a thing on your skin and your clothes won’t even get wet.

Misting fans are not just excellent cooling appliances, but they are even more energy efficient than air conditioning systems. If you compare a compact and portable air conditioner with a fairly large misting fan, the latter uses about 900 watts of power while the former might consume even less than 30 watts.

With the help of misting fans, you can easily enjoy the luxury of cooling while paying low electric bills, and also without having to worry about wasting energy. 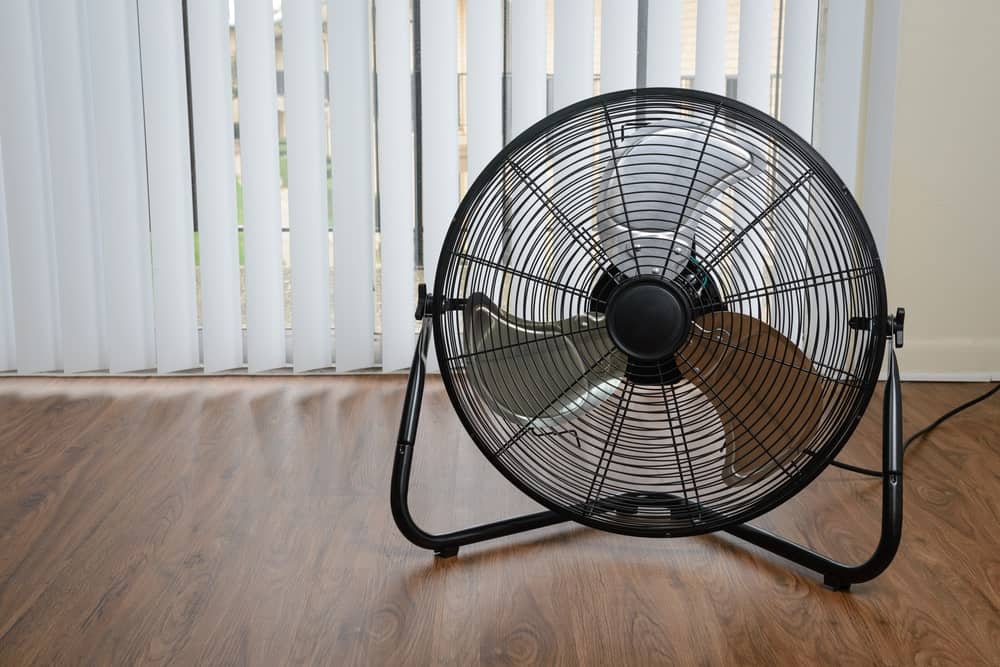 These fans are primarily used for the purpose of cooling the air on the floor which is why they are kept on the floor. When it comes to circulating air in a hothouse, floor fans come to the ultimate rescue of most homeowners by provid8ing exceptional performance.

These fans are super convenient and you can place them anywhere you like. They also have a very clear advantage over ceiling fans which is that they don’t require permanent installation. This suggests that they can even be used for cooling purposes even in outdoor spaces like patios, balconies, and terraces.

You will find floor fans in various different sizes, shapes, and types. Some of its common types include bladeless fans, box fans, window fans, etc. 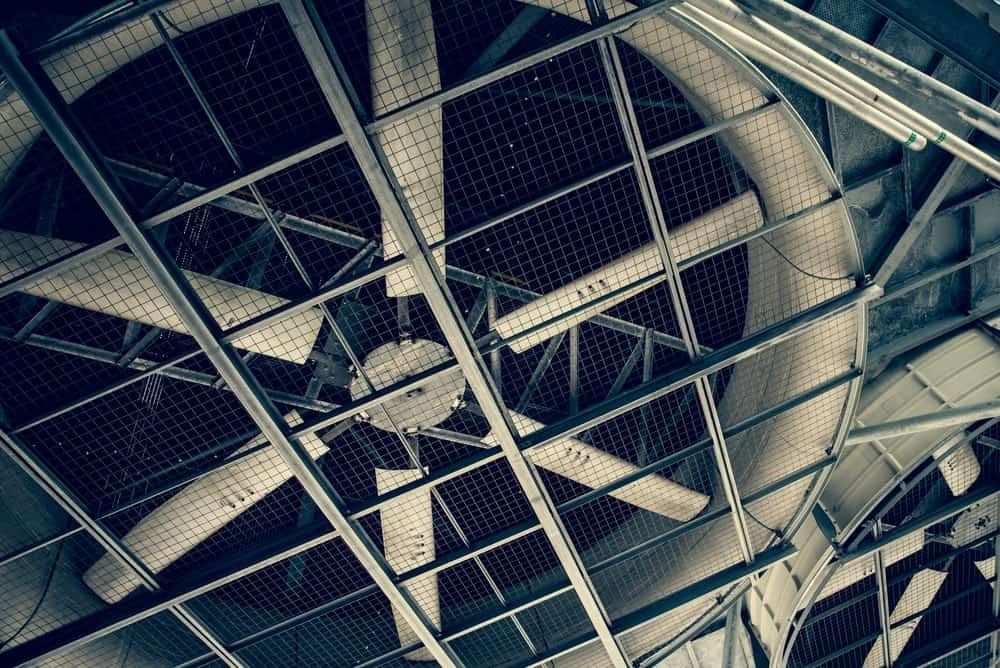 These are also called industrial blowers whose main purpose is to allow a large flow of gas or air to various structures and spaces. It consists of a number of rotating blades that are propelled by a motor turbine.

The main or key function of industrial fans is the continuous flow of air which is then used for a number of different purposes including air-cleaning, cooling, exhaust, combustion, ventilation, drying, aeration, and many others.

There are two main types of industrial fans out there: axial fans and centrifugal fans. Axial fans basically make use of axial forces to allow the movement of air. They do this with the help of the central hub with blades that are attached in the fan system. The hub spins at high speed that causes the fluid inside the fan to move to the shaft of the wheel.

On the other hand, Centrifugal fans make use of the centrifugal forces that are attained with the help of a rotating disk present within the machine. There are sharp blades that are mounted at the correct angles on this rotating disk which further help increase the pressure of the gas or air. These fans are also referred to as “scroll “or “squirrel cage” because they are contained within a scroll-shaped exterior of the fan housing. Their primary or basic function is to allow a quick escalation of air or gas that passes through the fan system.