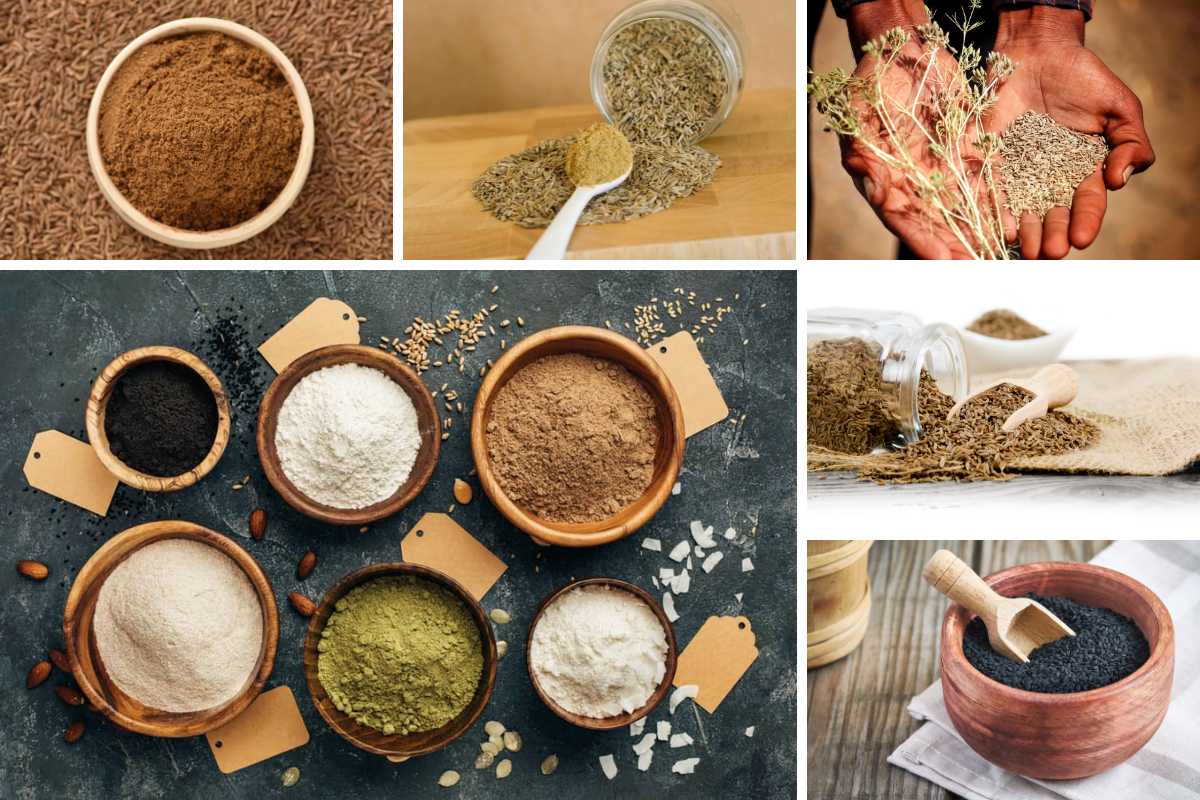 Cumin is a spice that you can commonly find in most kitchens. It is used in many different types of recipes that most people make in their own kitchens. Cumin has a distinct flavor and aroma, which makes it stand out among other spices.

There are many different types of cumin that have various benefits and flavors. Continue reading this article to find out about the different varieties of cumin and how to use them.

Related: What Goes with Cumin | How to Store Cumin | Types of Food | Types of Condiments | Types of Garnish | Cumin Substitute Options | Cumin vs. Coriander

Table of Contents Show
What is Cumin?
5 Different Types of Cumin
1. Cumin
2. Black Cumin
3. Bitter Cumin
4. Brown Cumin
5. White Cumin Seeds
Methods of Cumin
Roasted
Crushed
Roasted and Crushed into Powder
How To Use Cumin for Cooking
FAQs
What Does Cumin Taste Like?
Is Cumin a Medicinal Herb?
Is Cumin Used in Desserts?
How Do You Know If Cumin is Bad?

Cumin is a flowering plant that is also a herb commonly found in the kitchen. Cumin is one of the most famous spices found across the world. Cumin seeds are part of the same family as parsley, which can be used as ground-powered or as whole seeds.

Either of them can help add unique flavor as a seasoning for food. When the seeds are aromatic, they can be used as a flavoring. In addition, you can use cumin seeds for medicine.

Another name for cumin is its scientific name, which is cumin cyminum. Cumin seed is known as a member of the parsley family. It is native to East Mediterranean to South Asia. Today it is also grown in India, Turkey, Pakistan, Egypt, Morocco, Mexico, China, and Chile.

Cumin can be used as whole or ground seeds in many cuisines that are traditional for various cultures. In addition, it has been known to help some chronic conditions like diarrhea. It has many health benefits, which include improving digestion, helping with diabetes, and improving cholesterol levels.

In addition, cumin is a gray source of iron and can help reduce inflammation.

Another name for black cumin is its scientific name, which is Nigella sativa. The nigella seed is native to areas like Southwest Asia, Middle Eastern Mediterranean, South Europe, Northern India, Iran, Turkey, Pakistan, and Syria. It is traditional used as a spice in Middle Eastern and Indian cuisine.

In ancient Egypt, it was used as part of the mummification process for preservation purposes. It has been used for diabetes, asthma, fever, inflammation, hypertension, and dizziness, among other things. Black cumin has black seeds, which are thinner and smaller than other seeds.

Black cumin makes one think of fennel seeds, and they have a flavor that is sweeter and more lemony, like caraway seeds. Black cumin seed has many health benefits, including reducing acne, managing diabetes, easing joint pain. In addition, black seed can help relieve headaches, control blood pressure, and increase immunity.

Another name for bitter cumin is its scientific name, which is Cuminum nigrum or bunium persicum. It is native to areas that include Central Asia to Northern India. Bitter cumin is traditionally used as a spice in Indian cooking, especially Moghul cooking.

It can add flavor to grains, root vegetables, legumes, and meat.

White cumin has a bitter flavor with a warm and strong aroma. It has a large amount of oil in the seed. These seeds are often confused with caraway seeds.

Dried cumin seeds can be roasted on a hot plate for about two minutes over medium heat. Once the dried seed cools, you can use them, store them, or make them into powder.

The recipe you are making, your taste, and the flavor you want should determine how you should use the cumin.

Roasted and Crushed into Powder

This way your cumin spice will be fresh whenever you want to make your next savory dishes. This powder can also be used in your favorite spice blend.

How To Use Cumin for Cooking

Both ground cumin and whole cumin seeds are used in food. Cumin, especially whole cumin, is most often used in Indian dishes. It is a prominent flavor in many Indian cooking and food recipes.

The whole seed is infused with hot oil at the beginning of the food preparation. The seeds are also roasted lightly in a pan over medium heat to bring out more flavor. When you grind roasted cumin seeds, you create ground cumin.

Ground cumin can be used in any recipe because it does not need heat for the flavor to be released. If you lightly roast the cumin seeds and then grind them with a mortar and pestle or a spice grinder, it gives your food a more intense flavor. You can use cumin in vegetables, any meat, sauce, and soup.

It can be used in Indian, Middle Eastern, North African, and Latin American food. One of the popular Indian cuisines in which cumin is used as an ingredient is jeera rice or a Middle Eastern meal of falafel.

Cumin instantly adds depth to any recipe. It does not matter if you use cumin essential oil, cumin extract, or cumin powder, any of them can add rich flavor to your next meal. Cumin is warm and earthy, with a touch of citrus.

Is Cumin a Medicinal Herb?

Cumin has many health benefits. It has many minerals, nutrients, and vitamins. It has many antioxidants to help improve your health. It is considered an anti-inflammatory and has an antiseptic impact on the body. If you have conditions that are caused by the inflammation in your body, cumin may help control those conditions.

Is Cumin Used in Desserts?

Cumin is typically used in savory dishes, but it is possible to use it in sweet dishes, like dessert, as well. Cumin has a smokey flavor that works well with chocolate and is ideal in dishes like mousse, cake, and fudge. It has also been paired with cloves and cinnamon.

It gives a kick to desserts with a fruity flavor like baked pears or apples. If you decide to use cumin in dessert, use small amounts at first so it does not overpower your food.

How Do You Know If Cumin is Bad?

Cumin does not really go bad. You will see an expiration date on cumin when you purchase it. These dates indicate at what point the cumin is no longer at its best.

There is a point where cumin no longer retains its full flavor. When it is past its full flavor, the taste of the cumin has changed and will not give your food the most flavor. You can tell if the cumin is losing its flavor.

You can rub a small amount of the cumin in your hand. You can smell and taste it. If it does not have a strong scent or fill flavor, then you should replace your cumin.