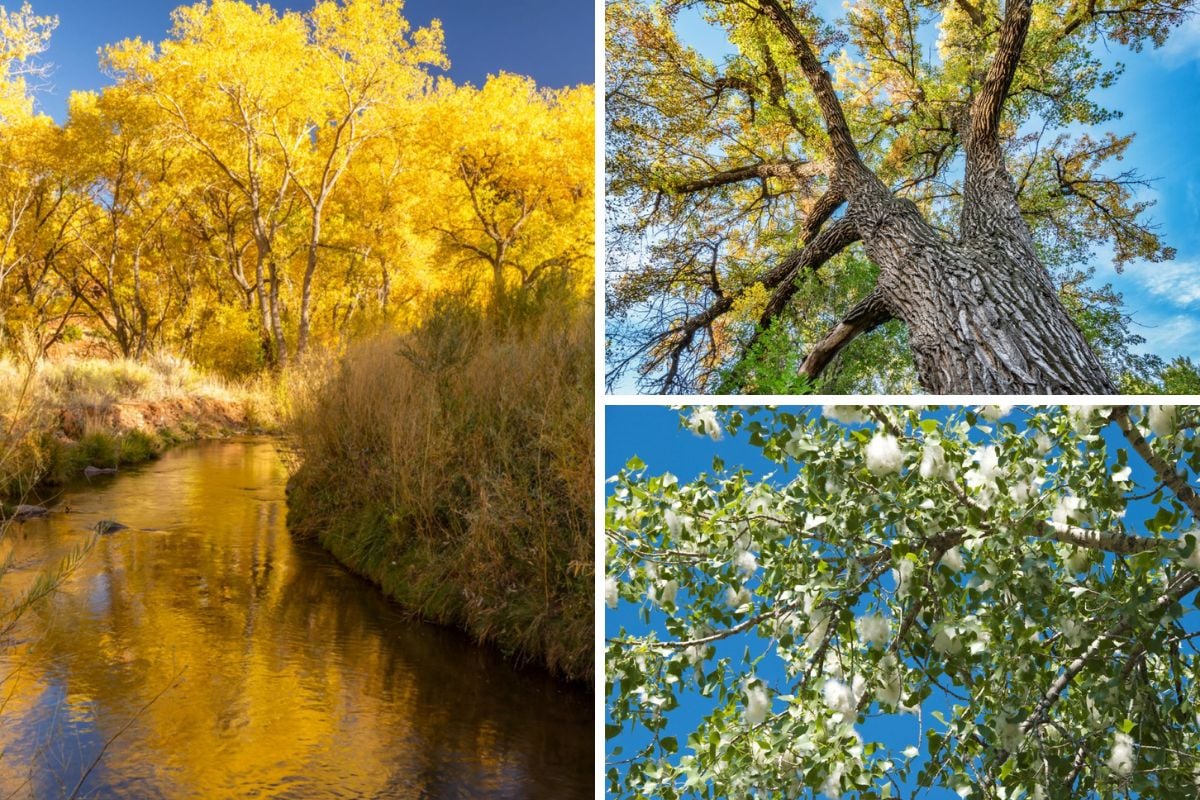 Forming a prominent part of the natural ecosystem in the US and reaching over 100 feet tall when fully grown, cottonwoods are truly majestic trees that tend to be a real head-turner (or rather a neck-craner).

Members of the willow family, cottonwoods are among the tallest hardwood trees. With a giant trunk and branches laden with brightly colored leaves, the thick foliage of the trees forms a dense canopy that spreads into an open crown.

Cottonwood trees play an important role in maintaining the harmony and balance in natural wildlife and are a familiar sight along rivers, lakes and streams. They are also a dominant feature in forests where they provide food and shelter for the animals and birds.

Besides sustaining equilibrium in ecological systems, these grandiose greens are also grown for shelter, shade, wood, fuel and several other purposes in addition to also serving as truly attractive ornamental plants. 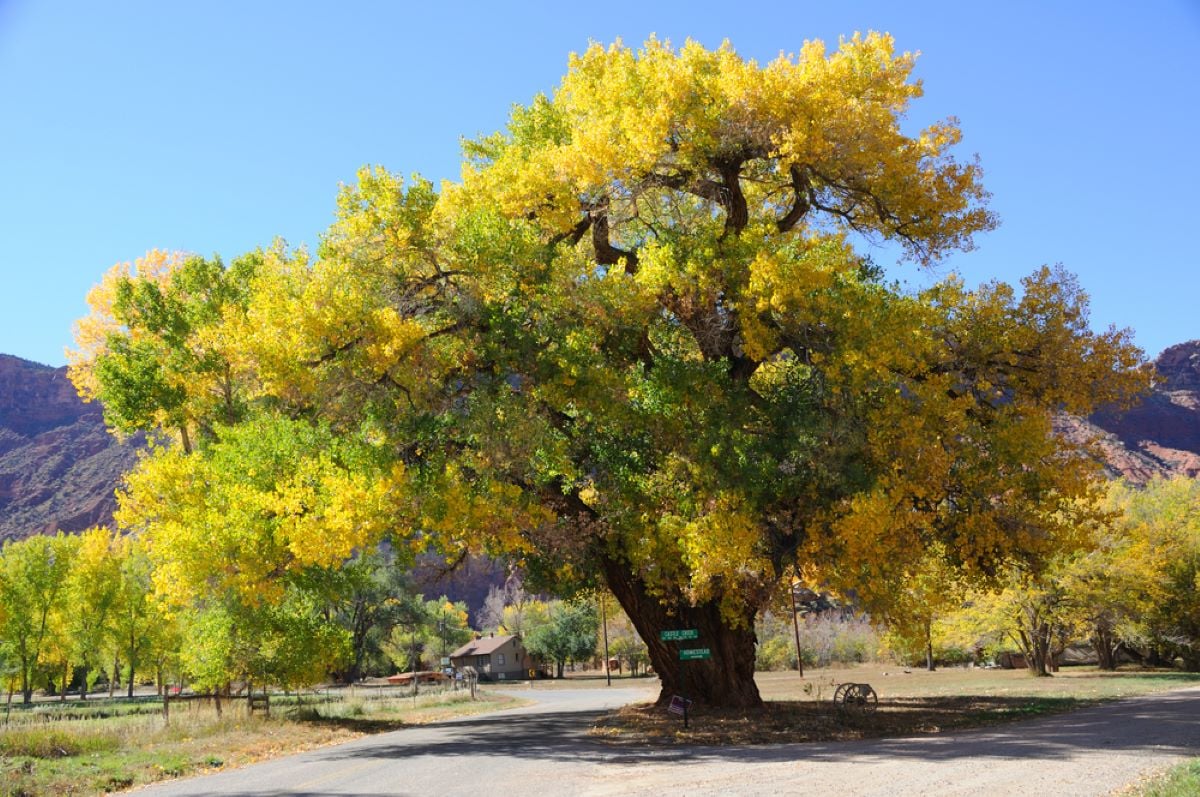 Cottonwoods are a species of flowering plants in the Salicaceae or the willow family. This refers to trees that belong to the genus Populus, section Aigeiros.

Native to various parts of North America and western Asia, cottonwoods share many similarities with other poplars, such as aspens and balsams.

Cottonwood trees are deciduous and have long triangular-shaped leaves that measure up to six inches each. With a growth rate of almost six feet per year, the trees can easily reach heights of 130 feet or more, when completely matured.

The canopy spreads to cover an area of almost 75 feet in width, whereas the diameter of the trunk itself can expand to over six feet when full-grown.

Cottonwoods trees have distinct male and female species and the ability to produce seeds is limited to the females only. They prefer sandy or silty soil but grow equally well in many other soil conditions except heavy clay.

Living on the plains where trees were scarce, Native Americans derived great benefits from cottonwood trees that could grow in harsh conditions. From the roots and trunks to the leaves and fruits, they used different parts of the trees for various purposes.

The roots served as a food source for both animals and humans, whereas the bark was used as food for horses and for making medicinal mixtures. Dugout canoes were produced from the trunks while the trees themselves doubled as landmarks and trail markers.

Cottonwoods can be found in three main categories. Although some characteristics, such as high growth are common across all varieties, they differ in other ways that include the color of leaves and soil preferences.

Below you will find all types of cottonwood trees along with cottonwood scientific names. 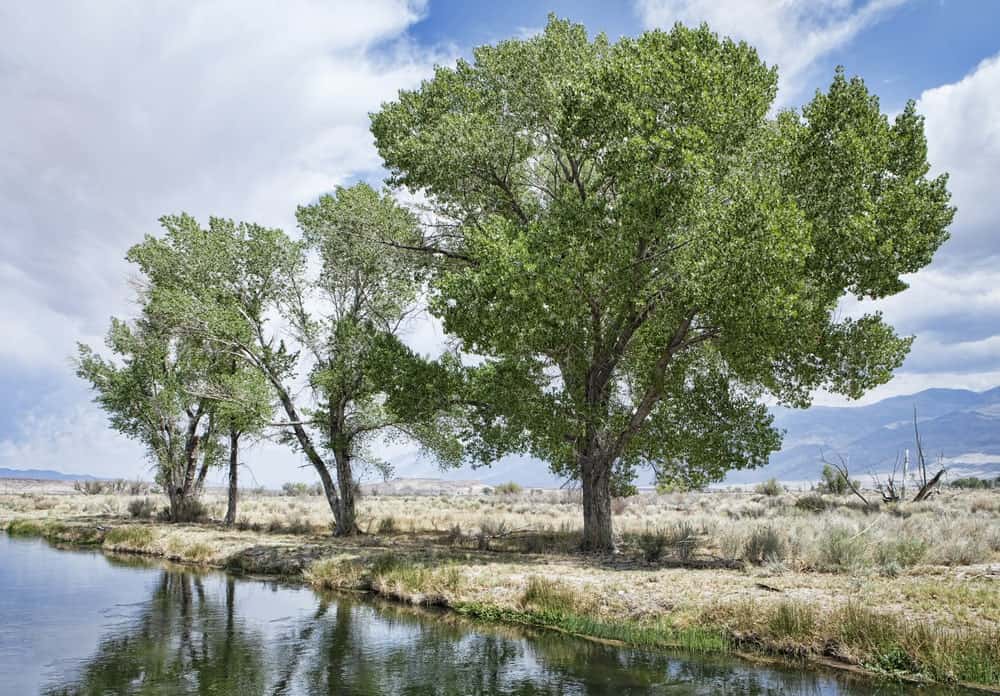 Native to North America, the eastern cottonwood dominates the landscape in the eastern US, but it also grows throughout the central and southwestern states, as well.

Extending well up into southeastern Canada and northeast Mexico, the eastern cottonwood is an enormous tree that can feature a height of 65 feet and a trunk that is 16 feet wide.

The eastern cottonwood is a riparian zone tree found mainly in areas that form the interface between land and water, such as on the banks of rivers and streams.

The species is called ‘deltoides’ due to the triangular-shaped leaves that resemble the Greek alphabet letter, delta. The leaves measure almost four inches long, are rough-toothed and have curvy edges with a flattened base.

These are reddish-purple in color and eventually burst open to release several small seeds that contain cottony strands to help them disperse through the wind.

Quick fact: A single eastern cottonwood tree can release over 40 million seeds in a season and if conditions are ideal, has the potential to live almost 300 years.

You can identify an eastern cottonwood from the loud rustling sound that the leaves make even from a very gentle breeze.

Eastern cottonwoods are often divided into further subspecies based on the location where they are found. 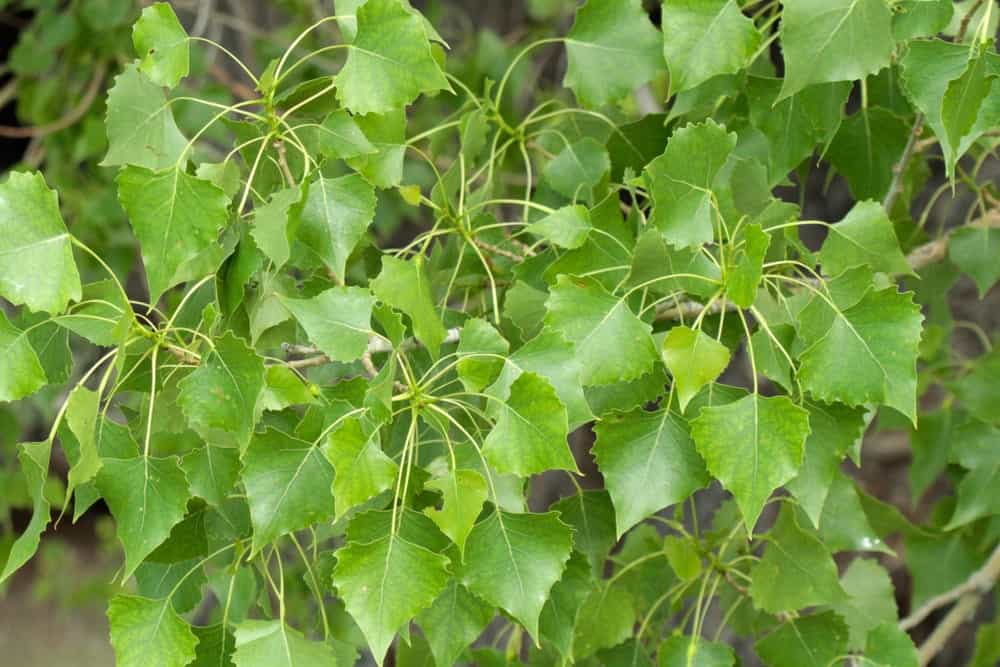 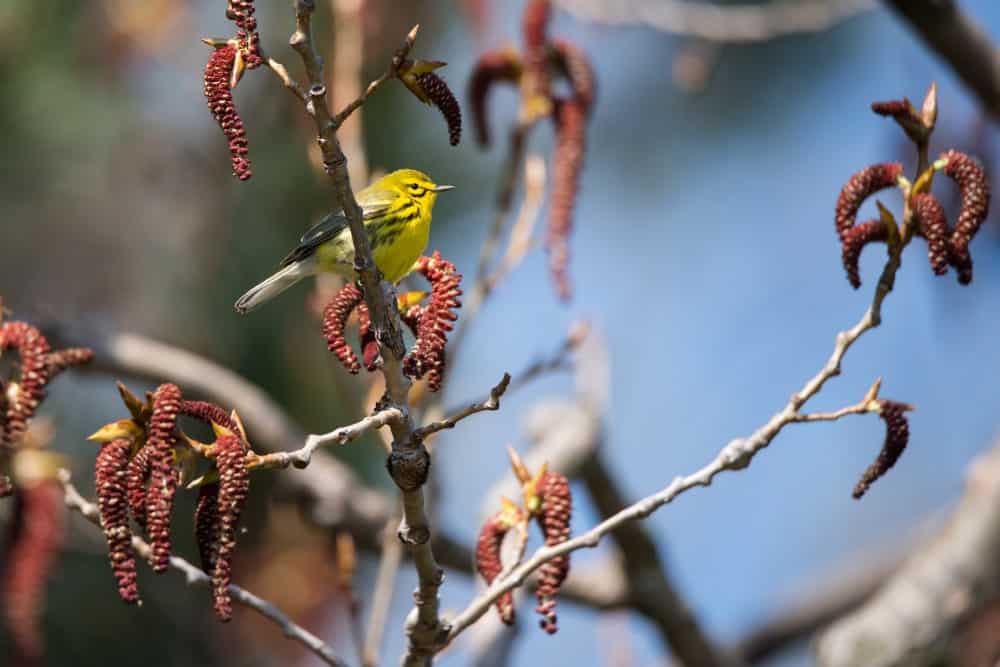 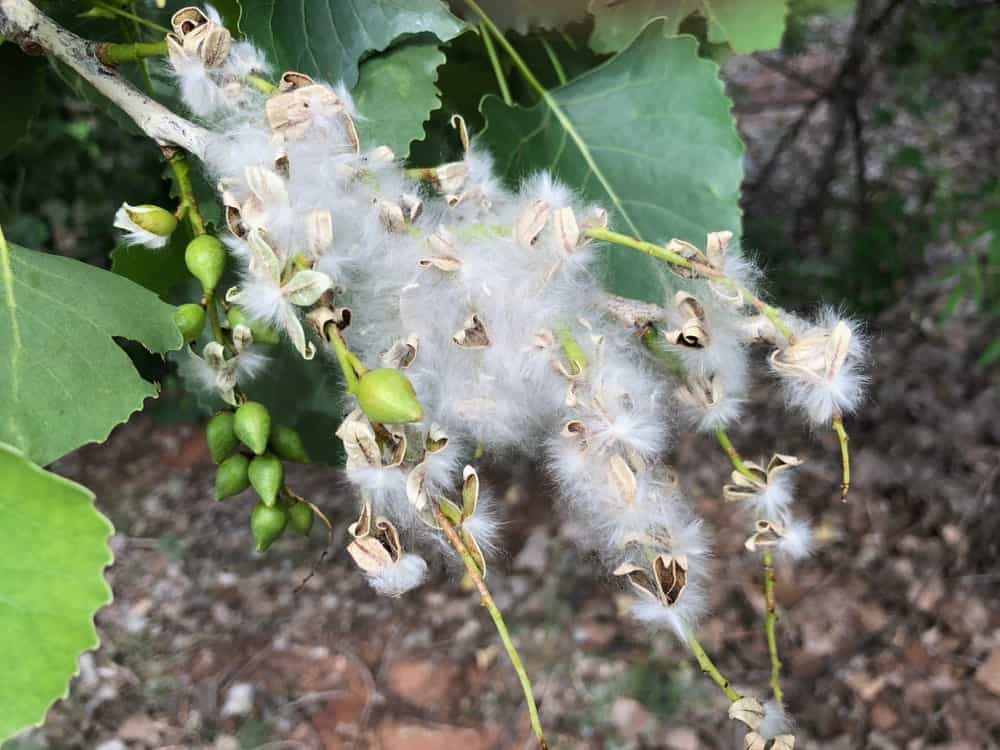 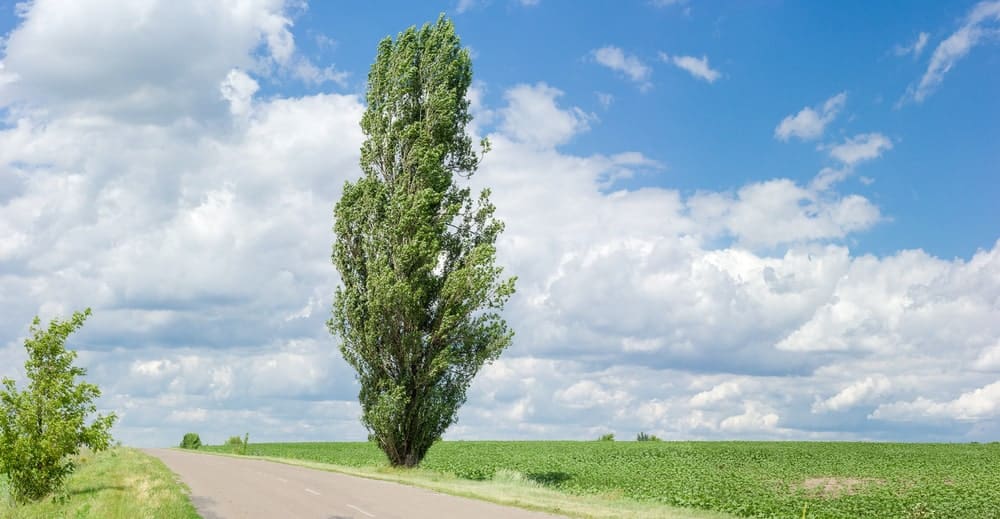 This type of cottonwood tree is native to Europe but has spread to various other parts of the world including Asia, Africa and different regions of the US, particularly in the west.

Populus nigra, which usually goes by the name of black cottonwood or black poplar, is a large deciduous tree. Compared to other types of cottonwood, the black poplar has relatively stunted growth, reaching a maximum of only 90 to 95 feet high on average.

Black cottonwood trees feature a conical shape. Their leaves have fine-teethed corners and have a triangular or diamond shape. The female trees produce long tubular flowers with a hairy surface and no petals. These mature into seeds that can self-disperse in the wind.

Black cottonwoods thrive best in moist soils and open areas that allow it to grow rapidly. 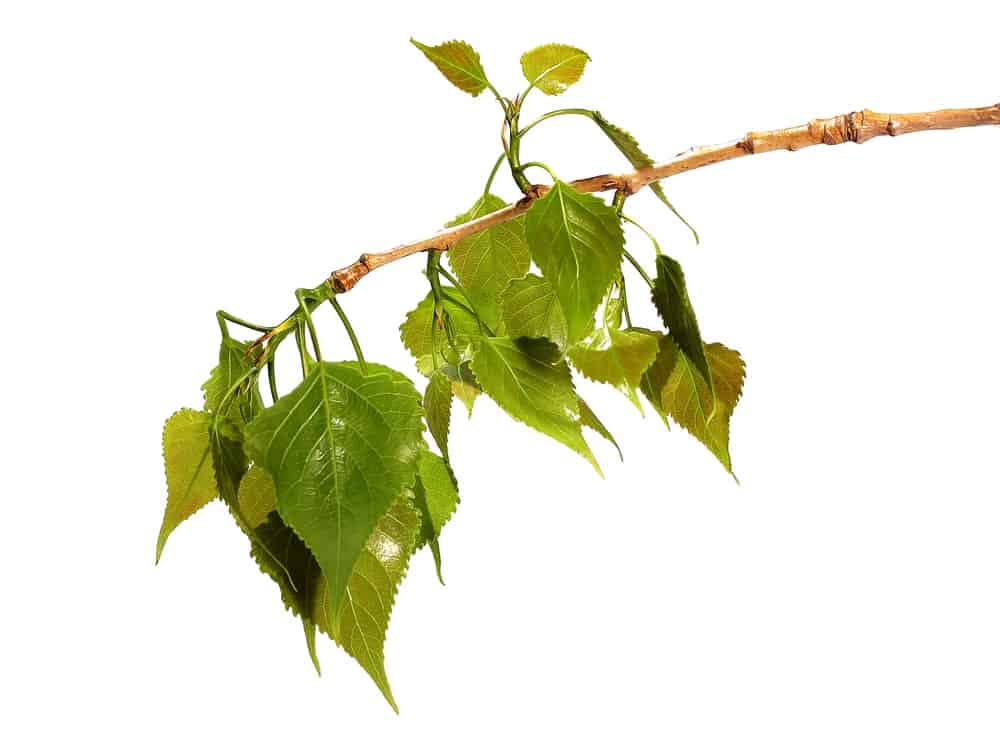 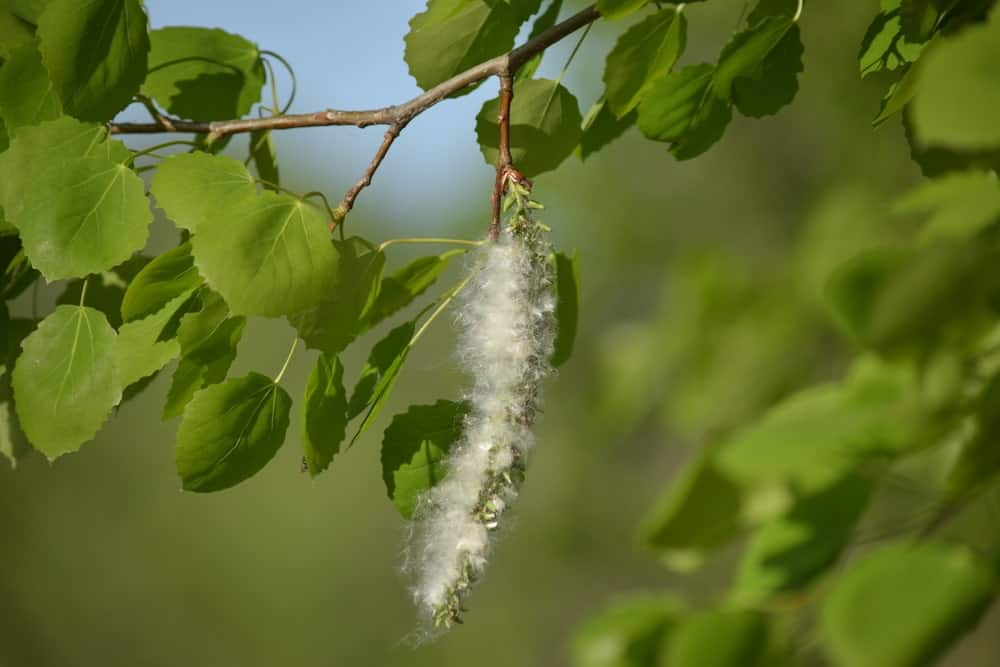 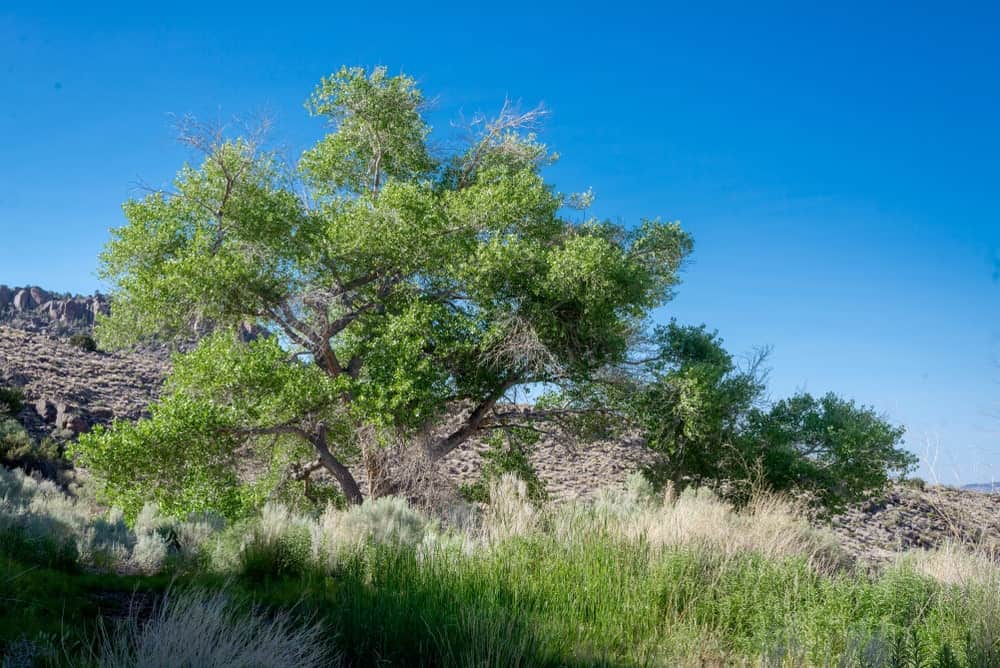 Named after John C. Frémont, the first Republican nominee for president of the United States in 1856, Fremont Cottonwood is prevalent in the southwestern US, particularly California, Arizona, Nevada, Idaho, Colorado and Texas.

Up until recently, Fremont cottonwood was believed to be the same as the eastern cottonwood but later studies found them to be two different species. It is easy to confuse both the varieties owing to similarities in their seed pods and flowers.

However, you can  distinguish the two by looking at the leaf structure. In comparison to the eastern variety, the leaves of Fremont cottonwood are relatively small. Plus, the edges of the leaves are less serrated. The trees can reach impressive heights in only a couple of years.

Fremont cottonwoods put on a spectacular show of colors as soon as summer ends and autumn begins.

From lush green to pale yellow followed by bright orange and sometimes even intense red — During March and April, the trees produce fluffy catkin flowers that look like elongated strips of hanging cotton from afar.

Of all the cottonwoods, Fremont is the most popular for ornamental purposes. In regions such as California and New Mexico, you can see them standing proudly near houses with spacious yards or even on various restoration sites.

The trees are also planted to improve natural landscapes because they act as windbreakers and prevent soil erosion. You will also find them in playgrounds and on similar recreation sites owing to the fact that they provide good shade and shelter. 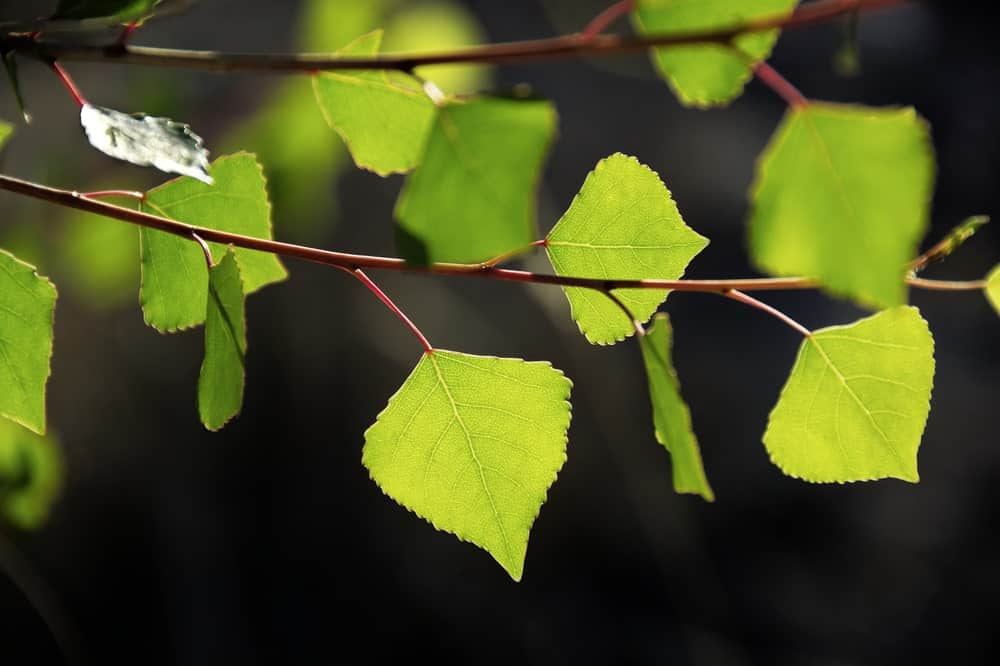 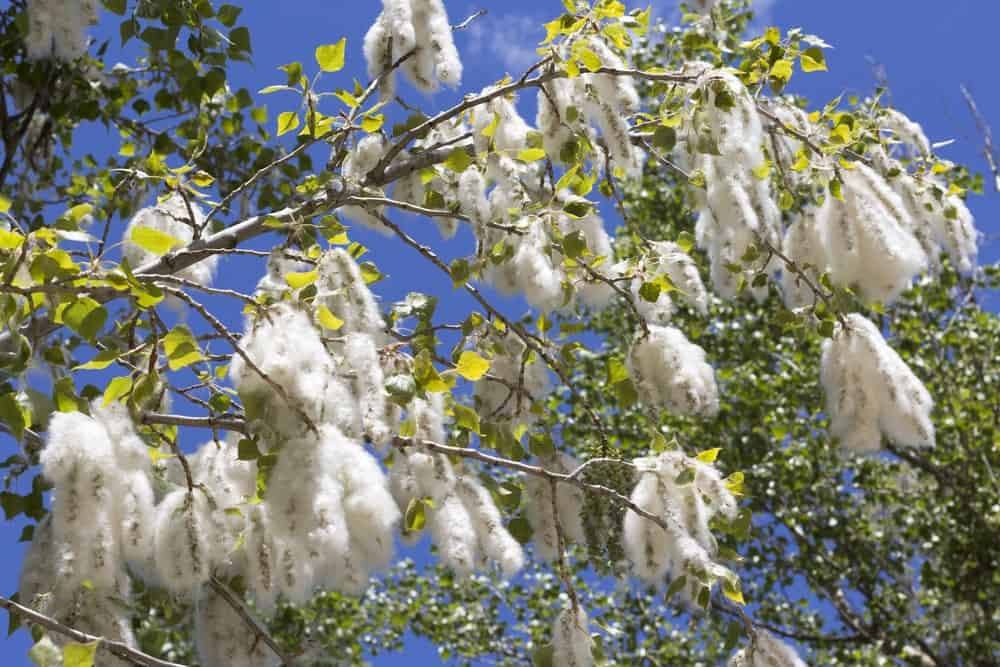 Lanceleaf is a hybrid variety (populus x acuminata). Easy to grow in virtually any location, the lanceleaf cottonwood is not only a dominant species in North American woodlands but is also the go-to option for anyone who wants to plant a shade tree.

These cottonwood species adapts to most soil types and is overall a very low-maintenance tree. Lanceleaf trees are hardy in USDA hardiness zones 3 to 9 as they prefer full exposure to sunlight.

Mature trees develop a pyramidal shape with thick green foliage that turns into bright yellow as autumn arrives. The leaves of this cottonwood variety look like a lance-like form, which is where the species got its name from.

Populus angustifolia, whose common names include the narrowleaf cottonwood, narrowleaf balsam poplar and willow-leaved cottonwood, is a hybrid variety that can grow up to 70 feet tall. This species’ foliage grows in an overall vase-like style that lends the tree a very graceful look.

Narrowleaf cottonwoods have little commercial importance as their wood is often affected by canker (a fungal disease that damages the bark) and is susceptible to decay.

However, they are ideal for use as shade trees or ornamental trees. Historically, the buds of narrowleaf cottonwood were used as chewing gum.

Necklace cottonwood (scientific name: populous lasiocarpa) originates in China and is also called the Chinese necklace poplar. Known for its large, broad leaves, the species blooms from March to May.

During summer season, the male tree displays a thick and dense cover of lush greens whereas the female flowers excessively until the branches are heavily laden with soft white cottony buds.

Populus heterophylla, or the swamp cottonwood, is a large tree that can measure over 100 feet high at maturity. Like all other cottonwoods, this variety is also dioecious, which means that male and female catkins or flowers grow on separate trees.

The male catkins (staminate) are cylindrical in shape and feature a bright yellow color whereas the female catkins (pistillate) are mostly green in color.

In general, the swamp cottonwood is a rather rare species in the United States except in Utah and Illinois where it can be found near rivers, lakes and wetlands. Other common names for populous heterophylla include downy poplar, river cottonwood and swamp poplar. 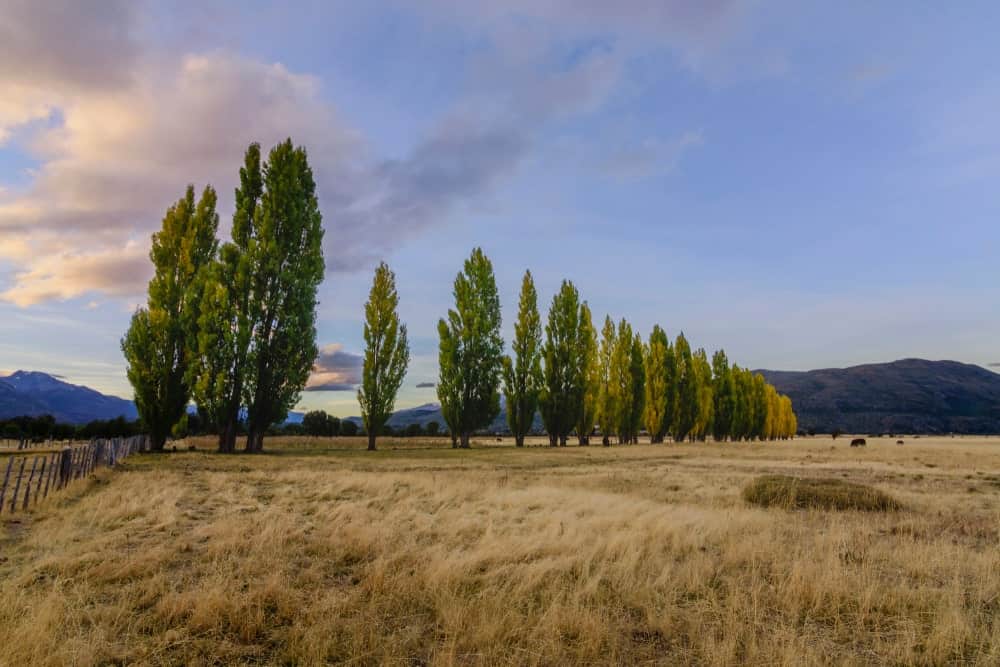 Cottonwood trees are commonly used as street trees in various parts of the world given that the environmental conditions are suitable for their growth.

This is because the trees not only look beautiful but also provide great shade. Their incredible growth rate coupled with low-maintenance needs makes them ideal for living in an urban jungle.

Cottonwoods look really attractive with their white fluffy cotton ball flowers hanging from a colossal tree against a backdrop of large green leaves.

With the visual appeal that they add, it is no surprise that different species of cottonwoods, as well as their cultivars and hybrids, are often planted by homeowners with a large expanse of land or a vast area dedicated for gardening.

Given their rapid growth pattern, cottonwoods are often planted with the objective of collecting wood from it later on. In less than a decade, a cottonwood tree can yield a large amount of wood that can hardly be obtained from any other source in the same time period.

However, although cottonwoods are a type of hardwood trees, their wood is relatively soft and fibrous. This makes it suitable for manufacturing cheap but sufficiently strong items such as shipping crates and pallet boxes.

The enormous, deep-reaching roots of cottonwoods hold the soil in place, making it perfect for reducing soil erosion as well as slowing down floodwater runoff. Moreover, the trees are a habitat for wildlife and promote a healthy ecosystem.