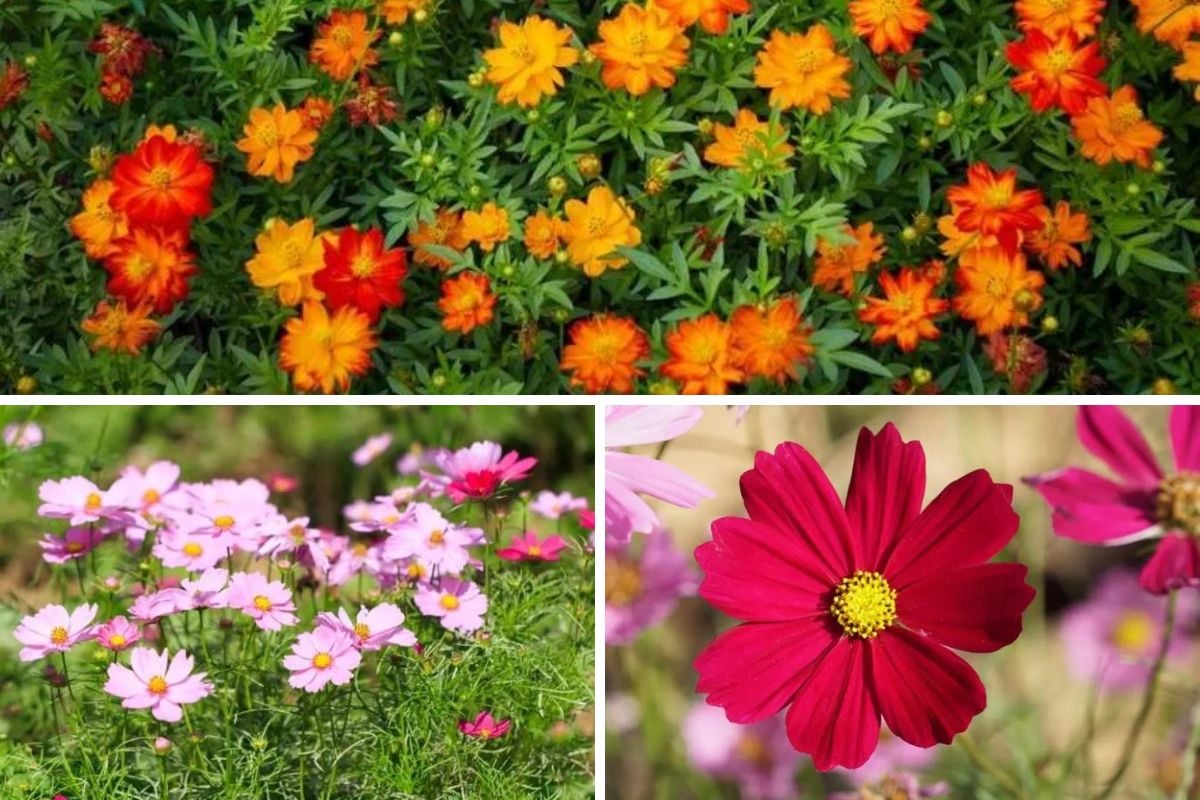 Cosmos belongs to the Asteraceae family, in the genus that comprises about 20 annual and perennial species. Cosmos is a Greek word that means harmony.

With the explosion of colors that Cosmos flowers add, they bring about harmony to any garden. The word Cosmos has been derived from the Greek word Kosmos which means ornament or decoration.

Cosmos was introduced in Mexico in 1800. The flowers of this plant are daisy-like. Cosmos flowers are big and are very brightly colored.

They are grown in gardens and containers. They bring about invaluable vitality to the landscape with their vibrant colors. They are super easy to grow, which further adds to their popularity.

You can never go wrong with Cosmos. With slender stems, finely cut leaves, daisy-like flowers, and the long blooming season, Cosmos is sure to win your heart. They are pest-free and low-maintenance plants.

Cosmos flowers are nothing less than charming. The bright color of these flowers attracts numerous butterflies. If you have these showy flowers in your garden, you can enjoy the cheerful vibes all summer long. 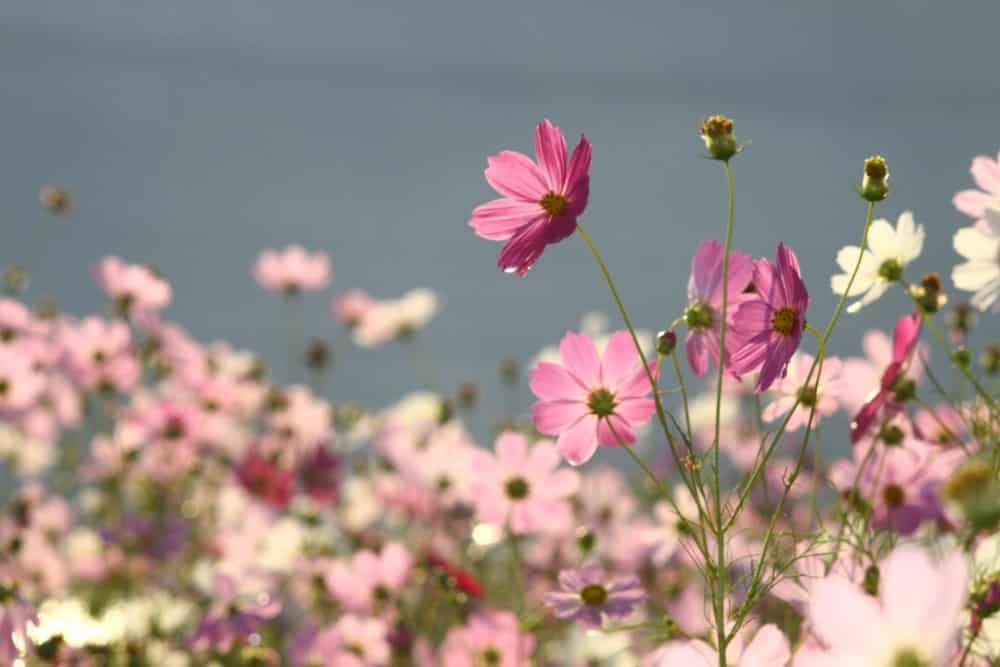 Cosmos plants are herbaceous perennials. They grow to an average height of about 3 to 6 feet. The leaves are simple, bipinnate or pinnate, and their arrangement is in opposite pairs.

The flowers are found in many breathtakingly beautiful colors including white, maroon, solid pink, and pink with flares in deep pink color.

Cosmos flowers bloom once in the season (twice a year). The flowers blossom heavily during the season but they die when the first frost strikes.

If the seeds of Cosmos flowers fall on bare ground, the flowers can re-grow in spring. Cosmos seeds are among the most easily grown seeds.

What color are cosmos flowers? Cosmos come is a wide range of colors including: 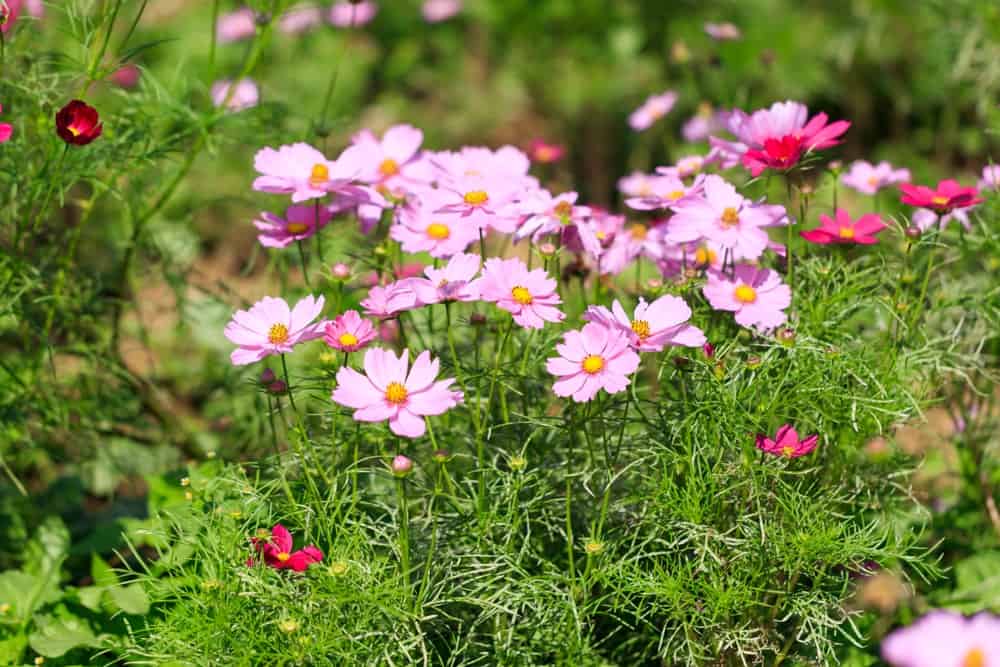 Cosmos bipnnatus is commonly known as the Mexican Aster or Garden Cosmos. This herbaceous plant is native to America.

Cosmos bipanntus is often considered as a half-hardy annual. Because of the self-sowing characteristics, these plants can re-grow for many years.

They are bushy plants that grow to an average height of about 2 to 4 feet. The flowers that the Cosmos bipinnatus species produces are in shades of purple, pink, and white.

The flowers are fairly large and span about 8cm across. The outer rays of the flowers surround yellow-colored, clustered central disc of florets.

The stems are branched and are occupied by split-up, fine, rough trichomes. Sometimes, the stems are hairless. The petiole is inconspicuous and winged. The leaves of Cosmos bipinnatus are almost sessile.

The leaves have pointed and fairly hard tips. The foliage is cut into threadlike segments.

The top of the plant becomes heavy when the flowers are produced. However, when Cosmos bipinnatus are grown in groups, the leaves interlace and the colony usually supports itself.

Cosmos plants have an upright habit of growth. They require full sun for growth.

The suitable soil type for Cosmos bipinnatus is sandy, loamy, or chalky. The soil should be well-drained and moist. They perform best in acidic, alkaline, and neutral pH.

Cosmos Dazzler is fairly tall-growing plants, growing up to 1.3m. They have stunning flowers with Carmine pink flowers and a yellow center. The foliage is apple green in color, having a feathery surface.

They are half-hardy, annual plants that are native to South America and Mexico. They produce flowers all summer long and will continue flowering till the first frost.

Cosmos Dazzler requires full sun for best growth. The suitable soil type is neutral and chalky, which is moist but well-drained.

They are excellent cut flowers that can last as long as 7 to 10 days in a vase. They are the perfect choice if you wish to add some height to your garden borders or to a cut flower patch. 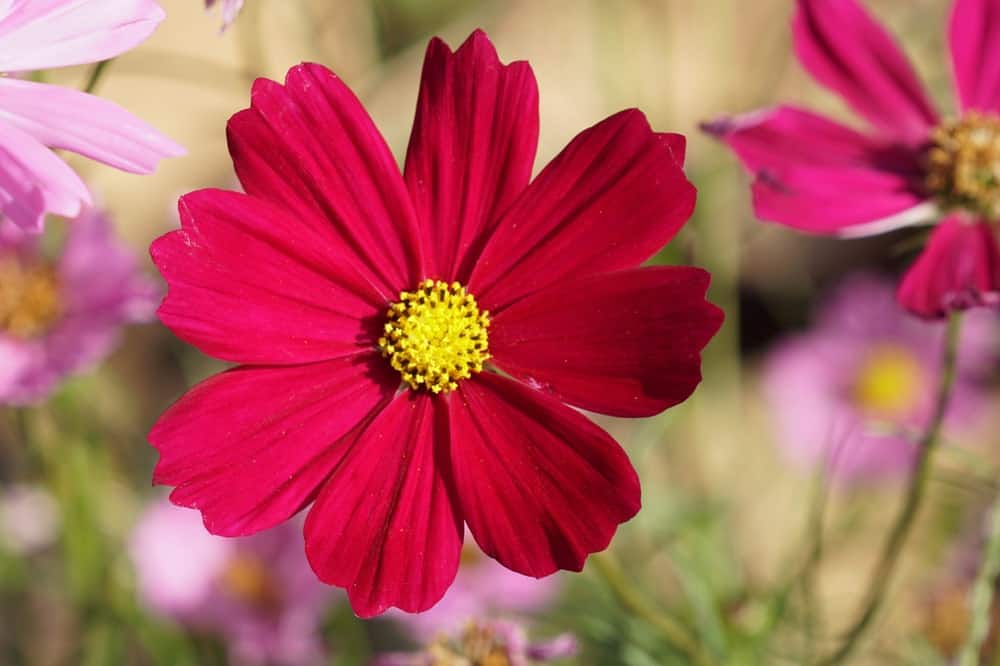 Cosmos Gazebo Red is a dwarf variety of Cosmos plants. It flowers earlier as compared to other Cosmos varieties.

The foliage of Cosmos Red Gazebo is feathery to feel. The large flowers have a velvety texture and are an attractive red in color.

Gazebo Red grows best in regions that receive full sun or are partly shaded. The soil type that suits Gazebo Red is sandy, chalky, well-drained, and lightly fertile. It prefers growing in soils that have an alkaline pH.

Cosmos Gazebo Red is an ideal variety of Cosmos flowers for garden beds, garden borders, and for cutting as they are great cut flowers.

Cosmos Fizzy Pink is a tall variety of Cosmos that grows to a height of about 100cm. It produces eye-catching, semi-double flowers that are white to carmine-pink in color.

They produce flowers from mid-summer till late autumn, till the first frost. The foliage is green and fern-like.

Being low-maintenance plants, they can grow well in lightly fertile soil. The only condition for growing Fizzy Pink successfully is that the soil should be well-drained.

They are great for gardens and meadows and they can be planted in pots as well. Moreover, they make excellent cut flowers, which add to their ornamental popularity.

Cosmos Picotee adds beauty and grace to any garden with its beautiful flowers. The flowers are white-mauve in color with edges a dark purple-carmine. The fern-like foliage is dark green that makes the flowers stand out even more stunningly.

They are half-hardy annuals that grow to a height of about 1m. Like all other members of this genus, Cosmos Picotee also requires full sun for thriving. They grow best in neutral, chalky soil that is well-drained.

They can tolerate dry soil but a soil that is too wet is not favorable. The soil should be moderately moist for the best growth of Cosmos Picotee.

They are a great addition to garden borders. They are excellent cut flowers that can last for about 7 to 10 days in a vase, making them great ornamental variety as well.

The white flowers against delicate foliage make Cosmos Purity a beautiful sight to look at. Growing to about 1m in height, Cosmos Purity plants are half-hardy annuals.

They need full sun exposure to grow. The soil should be well-drained but moist. These plants perform well in a lightly fertile soil as well.

They are a great choice for gardens beds and borders. Being excellent cut flowers they can last in a vase for 10 days which makes them a great ornamental variety.

Cosmos Rubenza creates a strong visual impact with its striking color. The flowers are a deep ruby red when they emerge but they turn into a color of the rose as they mature.

They produce flowers all summer long till autumn. They can perform well in heat, rain, and wind.

Cosmos Rubenza is low-maintenance plants. They need full sun and well-drained soil to thrive but they can survive in dry and poor soil. However, if the soil is too fertile, the plants may grow too tall and may flop over or topple.

Cosmos Rubenza is one of the best flowers to be added in any garden. They make beautiful garden borders and beds.

They can be planted indoors in containers. Moreover, they last fairly long in vases as well.

Cosmos Sonata flower early and are compact, making them suitable for containers and garden borders. The flower colors include white, pink, and carmine with a golden colored base. Cosmos Sonata flowers from early summer till late summer.

These pest-free, low-maintenance plants are excellent cut flowers which mean that you can enjoy their beauty indoors in vases as well.

Other popular varieties of Cosmos bipinnatus include Cosmos Seashells and Cosmos Sensation Mixed. 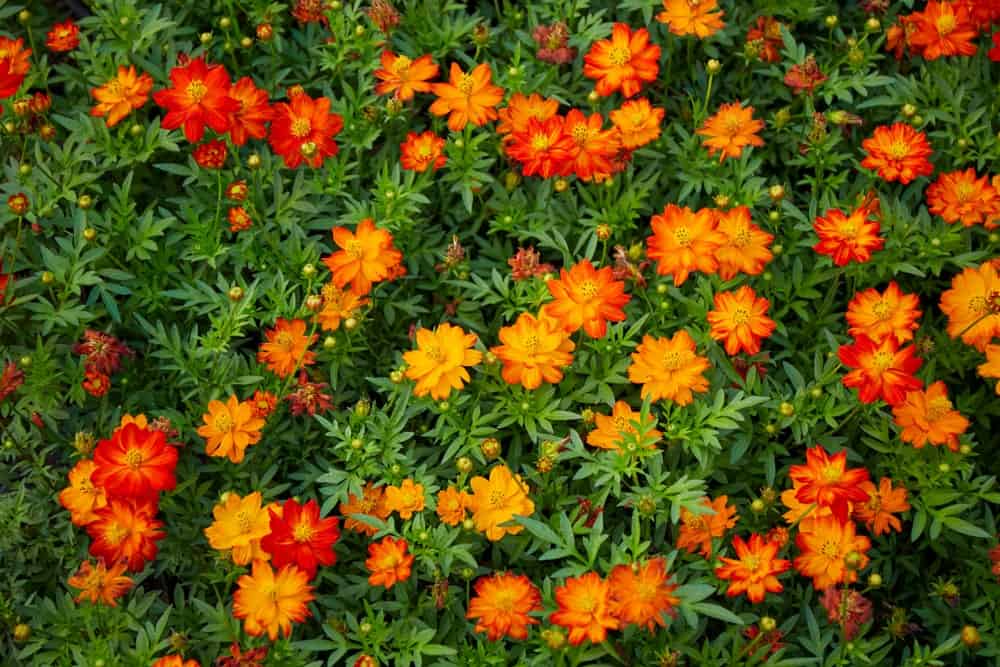 Although native to Central America, Mexico, and northern South America, they have naturalized to many other parts of the world including Asia, Australia, Europe, and North and South America.

They are very popular in Japan and Korea where they are planted on roadsides.

Like other species of Cosmos, C.sulphureus is half-hardy. These annual plants grow to a height of 1 to 7 feet. The flowers of the original Cosmos sulphureus and its cultivars are found in shades of orange, yellow, and red.

Cosmos sulphureus have an upright growth habit and are known for hairy stems. The daisy-like flowers have yellow rays and discs. The leaves are pinnate, having lanceolate leaflets.

There are many cultivars of this species that are quite popular. They include dwarf varieties with double and semi-double flowers, colors ranging from yellow to orange to scarlet red.

Following the trend of rest of the species in this group of plants, Cosmos sulphureus also require full sun to grow. They perform well in moderately fertile soil, provided that the soil is well-drained and adequately moist.

If the soil is too fertile, the plants grow fairly tall and eventually flop over.

A number of varieties of Cosmos sulphureus are found which include:

They bloom from early summer till fall. They great a significant visual impact with its brightly colored flowers.

As the name indicates, Cosmos Cosmic Orange features bright orange-colored flowers that are extremely attractive and eye-catching. The plant is heat, humidity, and drought tolerant which makes it easy to grow and maintain all summer long.

Cosmos Cosmic Red has double flowers that are a striking scarlet red. The flowers are very vibrant and attractive and that is the reason why the Cosmic Red variety is so popular in gardens.

They produce flowers from summer till fall, making your garden a sight to see and remember!

Featuring vibrant yellow-golden flowers, Cosmos Cosmic Yellow is yet another brightly colored, super attractive type of Cosmos sulphureus that is popular for all the right reasons.

Being easy to grow and maintain, and their great performance as cut flowers, Cosmic Yellow are not just great garden plants but are a great ornamental variety as well. 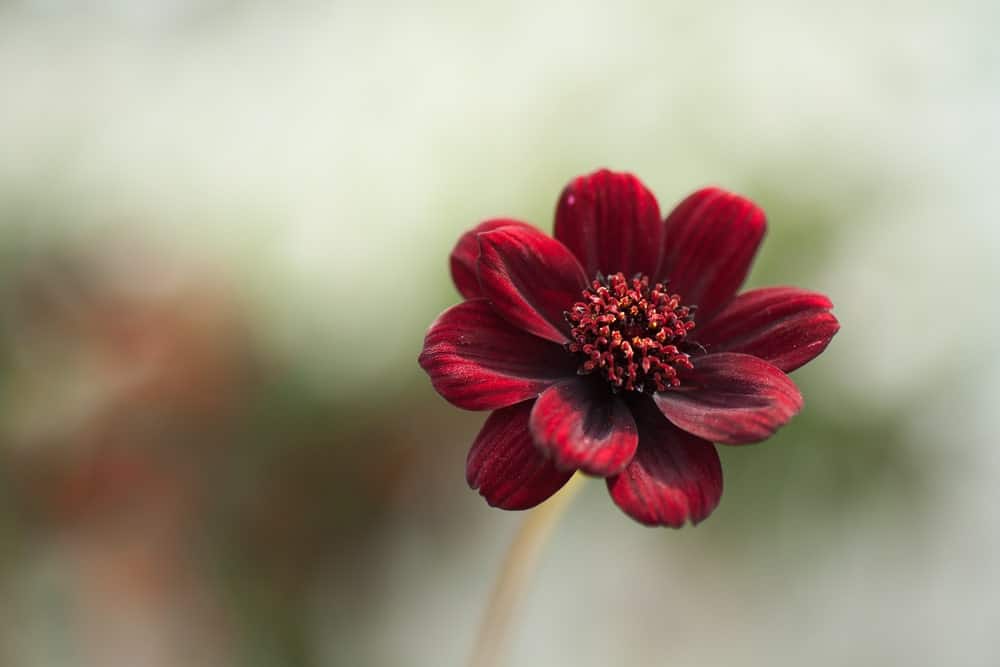 Cosmos atrosanguineus is known by its common name, Chocolate Cosmos. Although it has been declared extinct in the world, it is found abundantly in Mexico. Chocolate Cosmos flowers are so named because of their characteristic chocolate-like scent.

Cosmos atrosanguineus is a perennial, herbaceous plant that can grow to a height of 40 to 60cm. The leaves are pinnate.

The flowers of Chocolate Cosmos are produced in a capitulum and are found in stunning colors including dark red, maroon, and dark brown. They have a ring of 6 to 10 ray florets and an inner center of disc florets.

They require full-sun for bets growth. They perform fairly well in well-drained, moist, fertile soil. The soil should be moderately moist but can tolerate dry soil and drought conditions.

Wherever you grow them, the Chocolate Cosmos flowers are sure to steal and show and stand dominantly apart from the rest of the flowers in a garden, owing to their stunning colors and seductive scent!

Like we have mentioned repeatedly, Cosmos are very easy to grow and maintain. However, some caring tips have been listed down for you so that you remember all the important pointers!

Cosmos flowers are extremely beautiful and attractive. With so many types of Cosmos flowers, we are sure that you’ll have a hard time deciding which ones you want to adorn your garden with!

Home Expert (Bot)
Hello, how are you? Ask me anything about interior design, home improvement, home decor, real estate, gardening and furniture.
126 shares