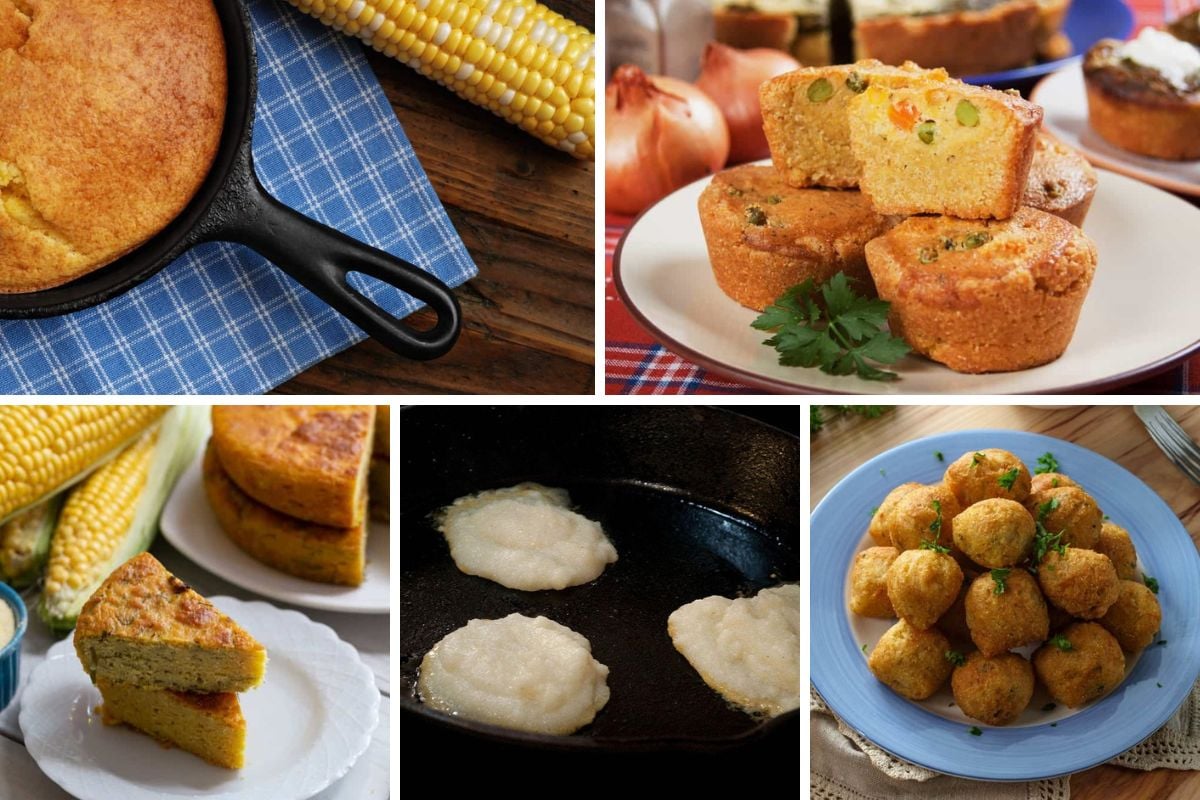 Cornbread is a quick bread that contains cornmeal. It is usually leavened with baking powder and has been part of Native American cuisine for hundreds of years. Cornbread is really popular due to its many immense benefits.

Firstly, cornbread contains whole grain which has several nutrients. It has plenty of fiber which is great for digestion, as well as cholesterol and regulation of blood sugars. Since the fiber intake is so high, it also has reduced calories as fiber just passes through the system.

Cornbread also has several other nutrients such as phosphorus, potassium, iron, magnesium, calcium, folates, folic acid, and vitamins A, B-6, and B-12. Cornbread also has 10 of the most essential amino acids which are crucial for organ function, growth, and cellular processes. It is better to make your own cornbread from scratch so that you can avoid added animal fats, sugars, and sodium that the prepared mix may have. 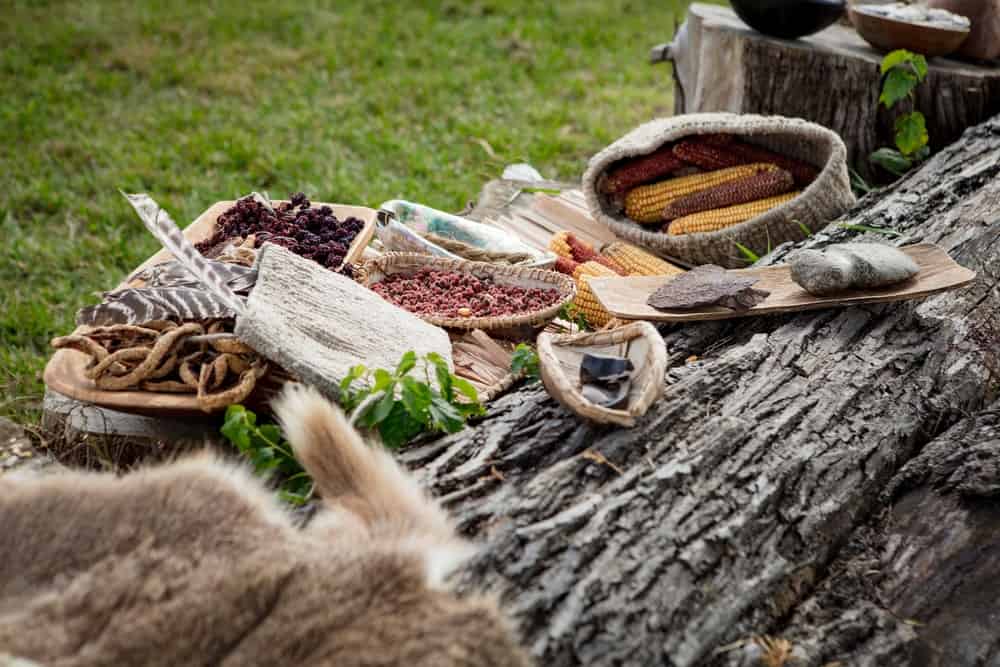 European settlers began to learn different recipes from the Creek, Cherokee, Choctaw, and Chickasaw tribes of the region. They began to use cornmeal in bread batter in the same way that they did in Europe. Cornbread thus became an integral cornerstone of cuisine in the southern regions of the United States.

Cornmeal was produced after grinding raw dry corn grains. The corn’s coarser form of the meal was also called grits. These grits are usually made by soaking the raw corn grains in warm water with an alkaline salt called calcium hydroxide. This loosens the bran and also adds plenty of nutrients to the grains. It is then separated through floatation in water and softens after a wash.

These softened swollen grains are called Hominy, which is also used in Spain to make tortillas and tamales. This Native American practice was called ‘nixtamalization.’ This corn yield was also used to make many other different dishes such as alcoholic beverages called Andean Chicha.

Cornbread became really popular during the time of the American Civil War since it was a cheap, nutritious option for many. It could also be made in many different ways which created variety. We will be exploring the different types of cornbread today.

Cornbread has been popular in southern cooking since it has a great aroma and texture. It is made in many different ways such as fried and baked. It is also rarely steamed, which gives it a pudding-like consistency.

It can also be baked into cakes for a delicious corn cake. Since there are so many ways to make it, you should know about the different types of cornbreads so you can choose your favorite for Thanksgiving. 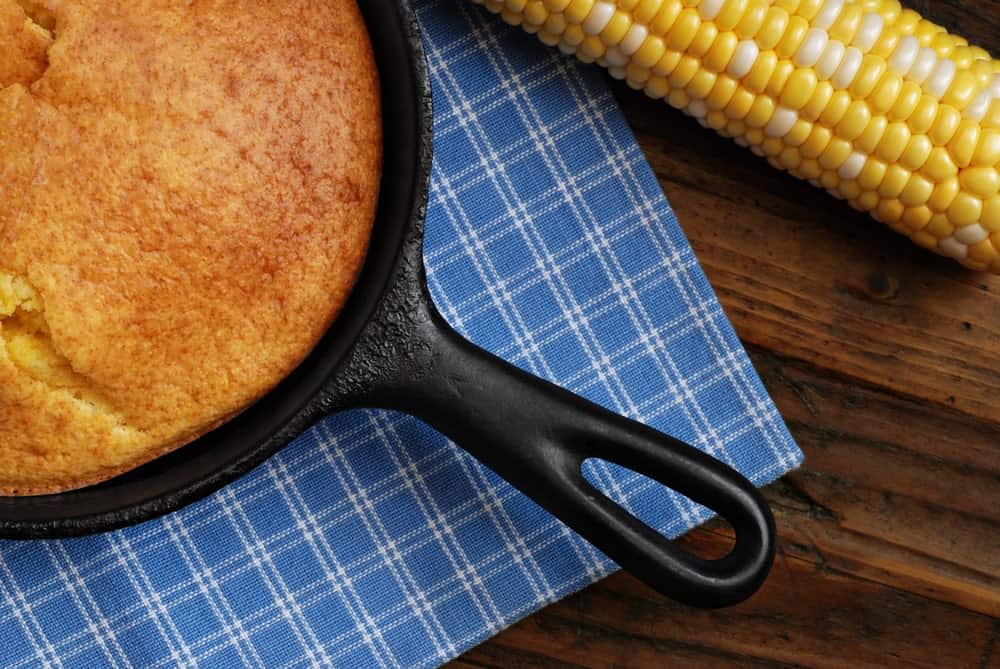 Baked cornbread is a really common and popular dish in United States cuisine and culture. It is often associated with the cuisine of the southern and southwestern regions of the country. It was also a traditional dish in places of the country where wheat flour for expensive to buy.

Baked cornbread is gently crumbled into cold buttermilk or milk for breakfast in many regions of the south. It is also a popular side dish to chili con carne and barbeque. In many southern regions, a combination of pinto beans and cornbread is a common lunch option for people. It is also sometimes served with chunks of onion or scallions and homemade butter as a side dish for meals.

Cornbread crumbs are also a really popular poultry stuffing for Thanksgiving turkeys. Texan-baked cornbread is famous for the slight Mexican influence it has. The cornbread is a hearty dish with creamed corn kernels, jalapeno peppers, and a topping of shredded cheese.

On the other hand, northern cornbread is made more cake-like and is sweeter. In the south, people usually use a combination of white cornmeal with buttermilk to make the bread. They may also use ingredients like pork rinds to make the bread more savory. People have cornbread with honey and butter in the north and with molasses in the south.

The most common way to bake cornbread is through a skillet, especially in the south of the United States. To make this, you have to heat lard, bacon drippings, or another type of oil in a heavy, cast-iron skillet. It is well-seasoned before pouring the batter of eggs, milk, and cornmeal directly into the hot oil.

This has a slight frying effect, which ensures that the crust will be crunchy. The mixture is then put into the oven to bake, resulting in a crumbly and moist cake. The bread is dense and served alongside other items rather than a whole meal. Cornbread can also be made as sticks, loaves, or muffins.

In the north, cornbread is baked in a very simple way. The batter is similar to the corn muffins and the result is usually lighter and sweeter than the northern version. The recipe will contain half wheat flour, half cornmeal, buttermilk or milk, a leavening agent, eggs, salt, and usually sugar.

Baked cornbread is different from its fried counterparts since it is made quickly and depends on eggs to create cohesiveness and hold the structure together. The baking initiates a process called ‘gelatinization’ in the starch, leaving only hard starches behind which provides the distinctive sandiness of cornbread. 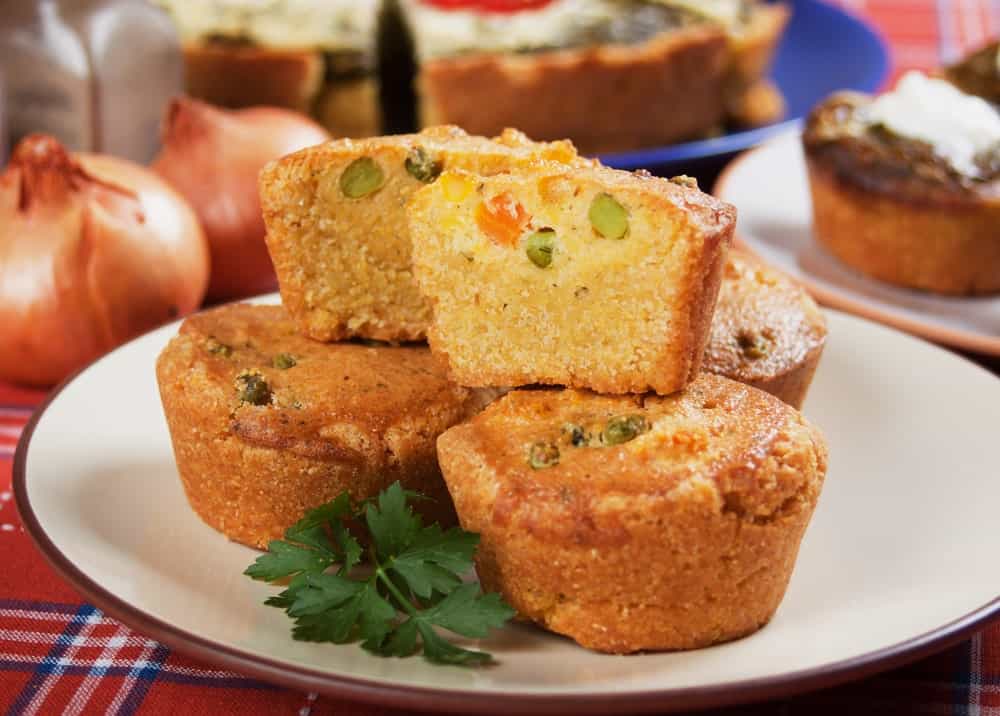 Cracklin cornbread is a southern American dish where cornbread is made with pork cracklings mixed through the batter. It can be prepared with pretty much any method but southerners make using the skillet.

This is because it makes the cornbread crispier on the outside. Cracklin bread was also mentioned in To Kill a Mockingbird. It is the narrator, Scout’s, favorite snack in the novel since the family cook makes it for him on his first day of school. 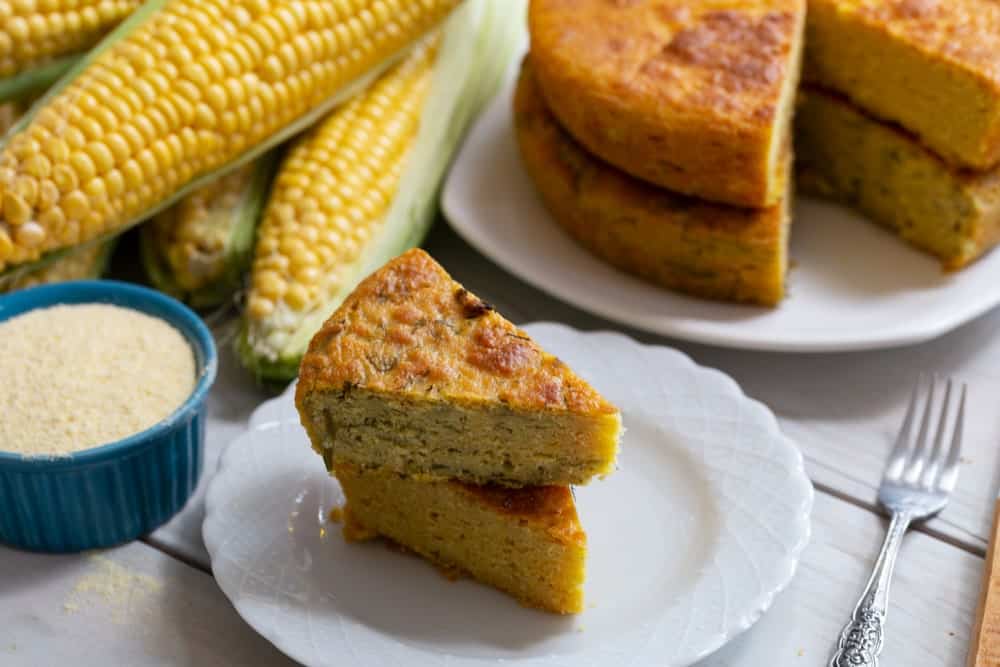 Corn pone is also known as Indian pone where cornbread is made from malleable, thick cornmeal dough. The mixture is usually milk-less and egg-less. It is cooked in an iron pan on an open fire with cooking oil, shortening, margarine, or butter.

Corn pones have been a traditional staple of southern US cuisine and have even become part of many literary works such as Mark Twain’s novels. This type of cornbread is an integral part of the cuisine of the Appalachian Mountains where cornbread is baked in a cake pan or iron skillet. 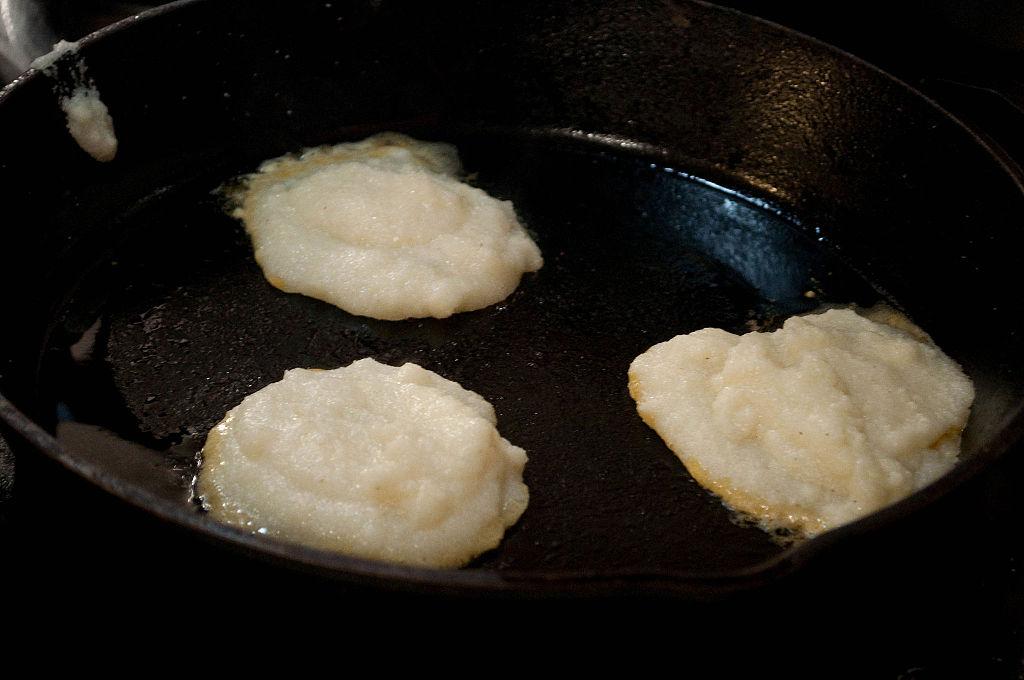 Hot water cornbread or scald meal cornbread is unique to the southern regions of America. Range tops are used to cook hot water cornbread, unlike baked or pones. It is a frying method that involves pouring small amounts of the cornbread batter into a hot skillet with oil.

The batter is made from boiling water and cornmeal with a chemical leavener or soda. The crust is fried in hot oil and turns crunchy and golden. The center of the batter turns into mushy, crumbly bread. Usually, the pieces of bread are 3-4” in diameter.

Hot water cornbread is beloved by many for its rich taste and soft texture. Sometimes, small amounts of wheat flour are also added to the mixture to ensure that it has a bread-like consistency. This type of cornbread has been made by natives for a long time, even before the European colonization. It was often covered or dipped in fresh honey for taste. 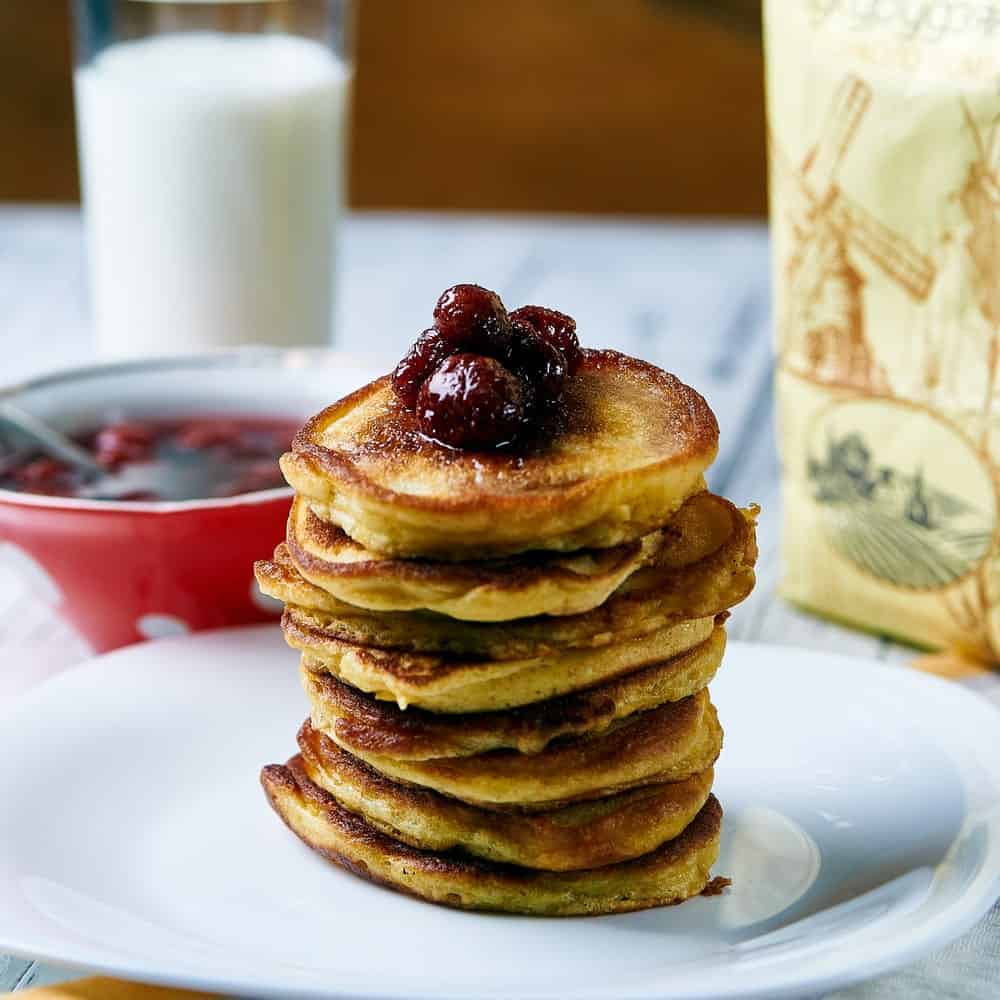 Johnnycake has many different names including Shawnee cake, Johnny bread, spider cornbread, and journey cake. It is essentially a flatbread made from cornmeal.

It is an early American staple food that is prepared all the way from the Atlantic coast to Jamaica. The food was part of the Native American cuisine and is still eaten in the US, Canada, Bahamas, Colombia, Dominican Republic, Saint Croix, West Indies, and Bermuda.

The modern version of the Johnnycake is mostly found in New England and originated from Rhode Island. It is made from fried cornmeal gruel, which is made from white or yellow cornmeal. It is mixed with hot water or milk and salt, and can also be sweetened. In the southern regions of the US, these cakes are commonly known as hoecakes.

The main difference between the hoecake and johnnycake is the way it is prepared. Now, they are both cooked in a skillet or griddle but the technique used to be different before since Johnnycakes were traditionally baked in the oven. Cooks are used to set the thick corn dough into a barrel stave or wooden board.

This was leaned onto a piece of wood or a rock and baked in an open fire. However, since the preparation methods are identical now, johnnycakes and hoecakes are now considered interchangeable. Some recipes still call for the johnnycake to be baked but the outcome is similar to corn pones.

In many households, Johnnycakes are made with leavening ingredients. They can also be made with ingredients more commonly associated with American pancakes, such as solid fats like butter or eggs. In the modern-day, johnnycakes are usually served with similar toppings to pancakes like honey, maple syrup, and any other sweet topping of choice. 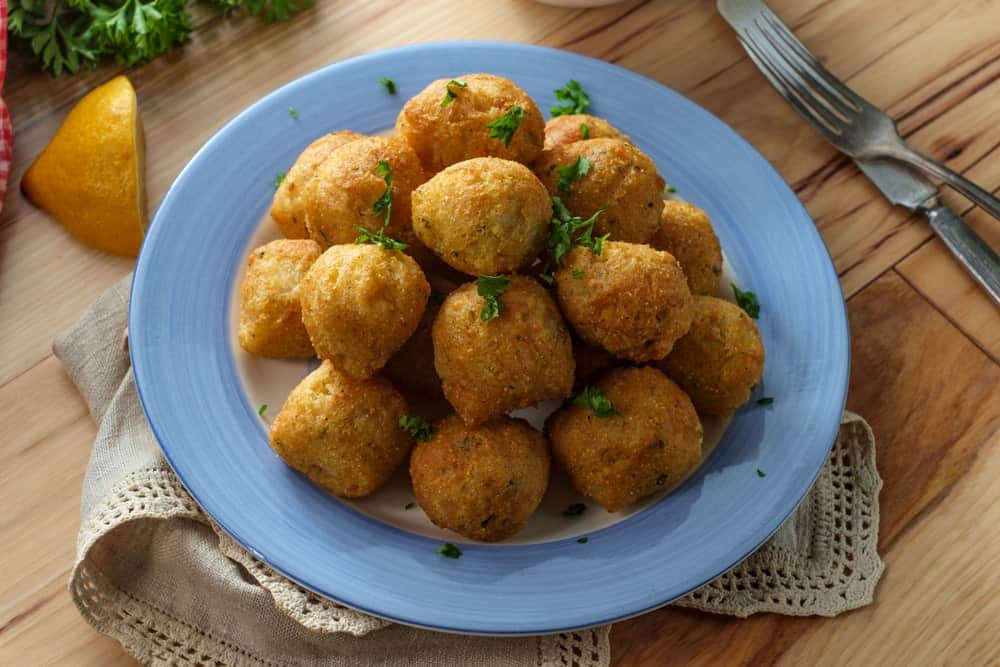 Hushpuppies are small, deep-fried savory balls that are made from cornmeal batter. Since these are deep-fried, they are quite different from regular fried items. They are usually served as a side dish with seafood like fried fish in the south.

There are many different ways in which hushpuppies are cooked. Some recipes can include chopped onions, onion seasoning, jalapenos, or beer. The hushpuppy will be white or yellow and moist on the inside and have a medium to light golden brown and crunchy exterior when it is fried properly.

This type of cornbread has existed for many years. It was a part of Native American culture to create Hominy through nixtamalization. From there, many different types of cornbread were formed and soon, hushpuppies started becoming a popular variant.

Hushpuppies retain a strong connection with the Southern United States. There is even a hushpuppy championship held every year in Lufkin, Texas. They are also served in many restaurants where deep-fried seafood is on the menu. 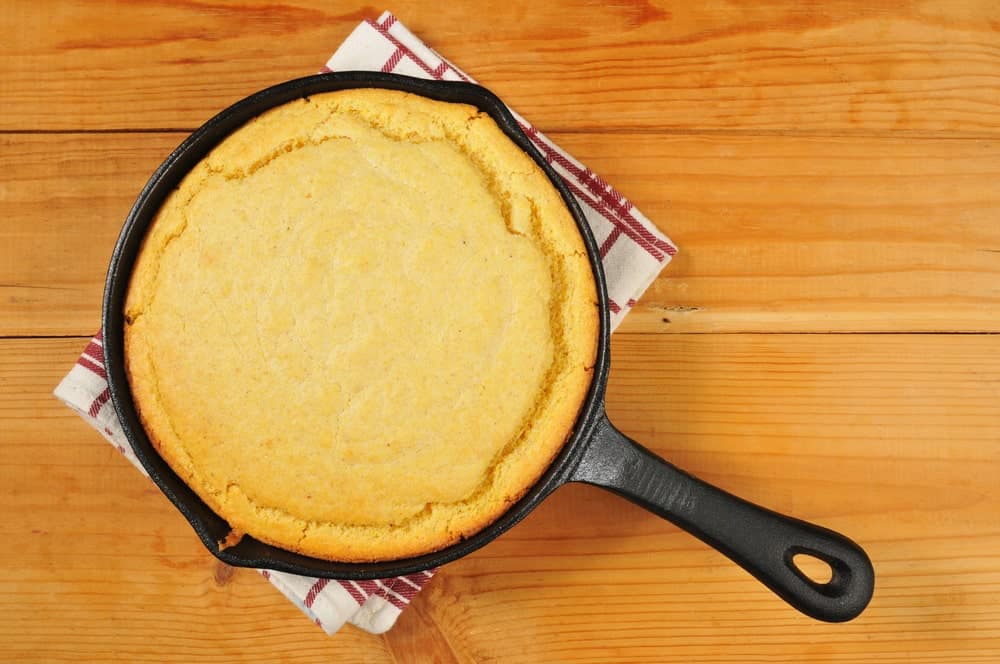 There are many recipes to make delicious Southern-style cornbread but this one definitely takes the cake. It is simple and easy to use!

How to Store Cornbread 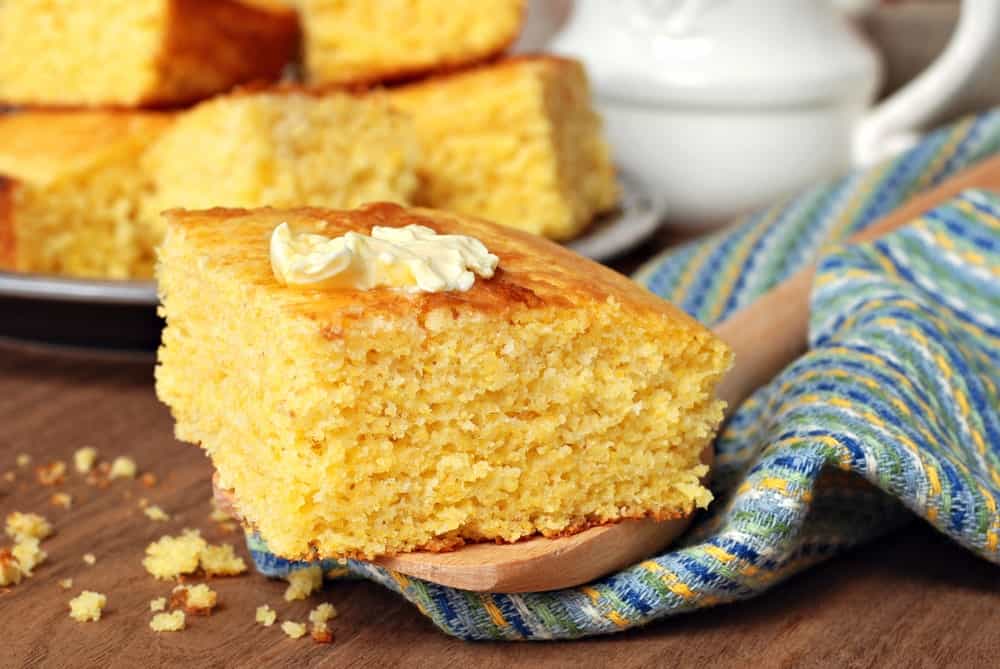 There are three main ways to store cornbread properly so that it remains crunchy on the outside and moist on the inside.

Secondly, you can store it in the fridge. Let it completely cool off before you put it in the fridge or else it will spoil faster. Do make sure to wrap the cornbread in plastic wrap to keep moisture and air away from it. You can store the bread in your fridge for up to a week after which it will lose its flavor and go bad. You can eat it cold or reheat the cornbread in the oven.

You should place the bagged cornbread in a container if your freezer is crowded or else it will get smashed. You can eat it after thawing or reheating it. You can store the cornbread like this for 1-3 months.

Cornbread is a delicious dish that can be cooked in a variety of different ways. It’s nutritious and cheap to make, so you can have it any day you like. There are many different ingredients and toppings you can use too, so do make sure you experiment and find your favorite type of cornbread.

Home Expert (Bot)
Hello, how are you? Ask me anything about interior design, home improvement, home decor, real estate, gardening and furniture.
38 shares