Curious as to what exactly are the different types of coffee? You'll be surprised. It seems like there are many types, but there isn't. Discover all you need to know about coffee beans and preparation here. 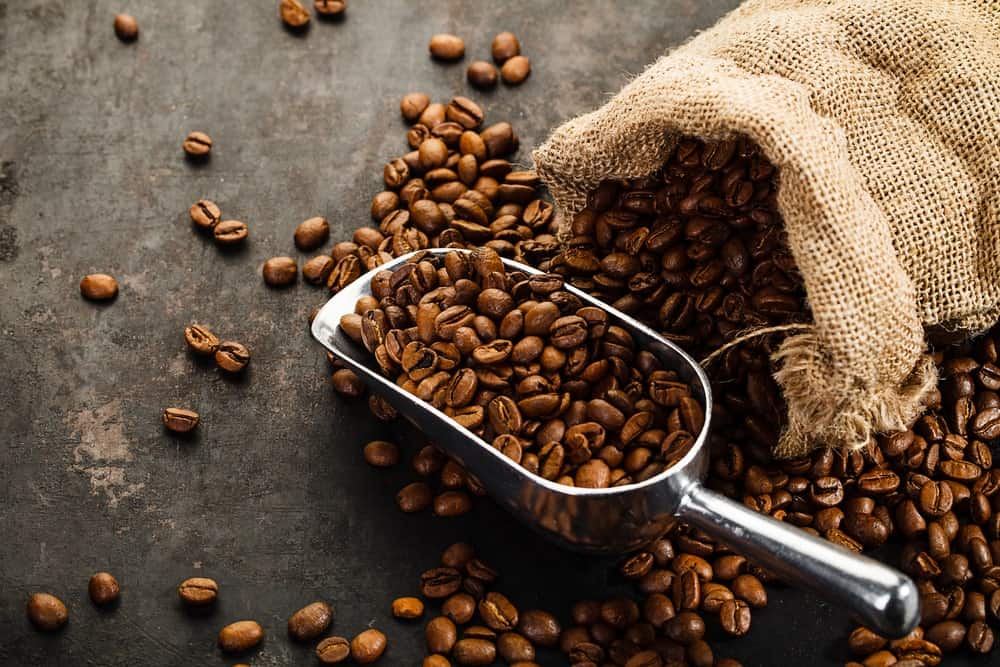 Imagine going in to work on a Monday without a shot of your favorite Starbucks coffee, and there is no coffee machine in your workplace to make up for your post-weekend lethargy and lack of sleep. If you find that a little nightmarish, you are not alone. Coffee is one of the three most popular drinks in the entire world, the other two being water and tea.

Here’s a fun fact: In the US alone, 400 million cups of coffee are consumed in a single day!

Grown in about 50 countries and consumed in almost each one, since the 9th century, humans have known about this magical bean, have cultivated it, consumed it, and reaped its various benefits.

Today, coffee is mass produced on a large scale, processed in factories, and sold over the counter to billions of people. Even though the process of converting coffee beans into tasty beverages varies from culture to culture, there are some common types of coffee drinks that you should know about when ordering at your favorite coffee chain.

Many legends surround the discovery of the bean, but what is for certain is that it was initially discovered in Ethiopia. One legend claims that an Arab shepherd observed the behavior of his goats became erratic after they consumed the fruit of this plant. Curious to know more, he consumed the berry. Upon discovering its stimulating effects, he revealed his finding to the world.

Wild coffee plants were taken from the mainland and planted in Arabia around the 15th century. Despite opposition from Islamic sacred texts, coffee spread amongst Arabs to neighboring countries, giving rise to coffeehouses, or qahveh khanehs, which became a cultural phenomenon. By the 17th century, coffeehouses were commonplace occurrence all over Europe, Britain, and other British colonies globally.

In the 20th century, Brazil became the biggest cultivator and supplier of coffee worldwide, and continues to be to-date. During this time, industrial coffee roasting and grinding was perfected, and the 1950s saw a rise in instant coffee production. 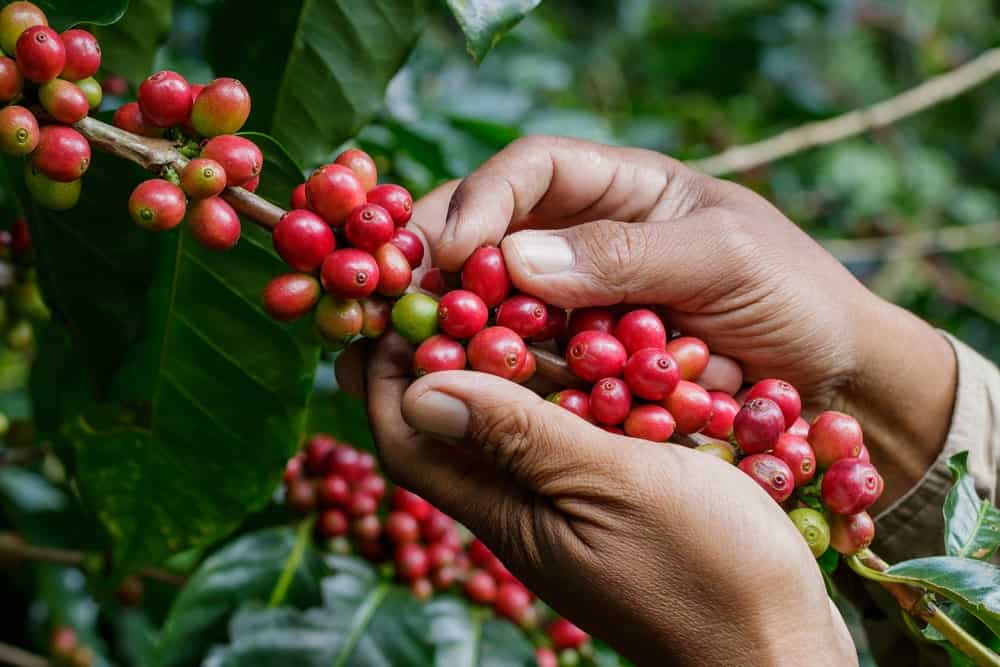 Coffee beans grow on shrubs. The berries, known as ‘coffee cherries,’ house two coffee beans each. About 5% of these cherries, dubbed ‘peaberries,’ contain only one and according to some, produce a denser and more intense flavor.

After being picked, the berries are set out to dry. In the absence of any complex machinery, this can be done by simply spreading them out in the sun. Since the drying process requires ample amount of heat, it is usually performed in hot places like Brazil and Ethiopia. After being washed, the fruit is spread out on concrete or brick patios where it is exposed to the sun, often turned and tossed at intervals. This phase is most critical since the fruit has to be kept away from fungi and mold, while also being dried just enough to not break into pieces.

It may seem ridiculous, but some people enjoy coffee for its taste and not so much the caffeine. After drying, some beans are decaffeinated by using chemical solvents or carbon filtering, but these methods are becoming exceedingly outdated.

See also  Nespresso Vertuoline vs. Pixie Espresso Makers - Which One Should You Buy?

The popular demand for newer, more natural extraction methods has led manufacturers to employ organic methods of caffeine removal. However, no method can claim to remove caffeine entirely from the bean.

Next is the roasting process. The green bean derived from coffee cherries is now ready to become its trademark brown, and so it is fed to machines that provide very high temperatures for the bean to expand and. During the roasting process, highly complex chemical transformations occur inside the bean, which give rise to the bitter sweet aroma we associate with coffee.

Roasting the beans too much can lead to a deterioration of flavor and smell, therefore, the coffee beans are sifted after roasting and only the most potent make it through. 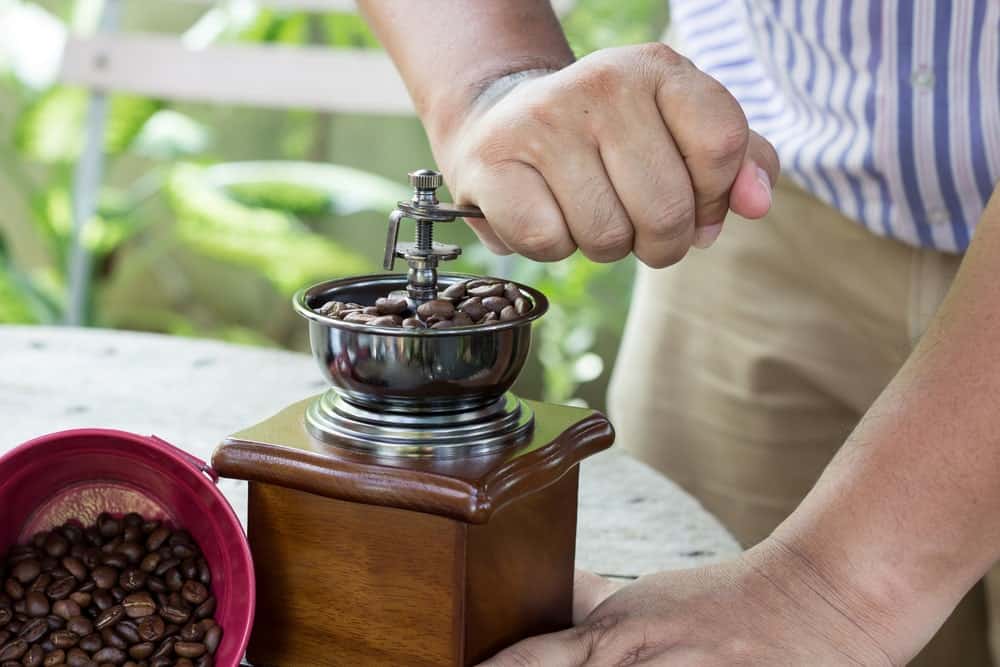 Some coffee brands package the roasted coffee beans whole for the drinker to grind, but most offer ground coffee to make the coffee-making process easier for consumers. Grinding machines consist of rollers of various sizes that first break the bean, and then refine it into whatever degree of coarseness is required.

Coffea arabica, cultivated mostly in Latin America, accounts for 60% of all the coffee produced in the world. This variety, however, is quite sensitive and can only be grown at high altitudes. Ideal temperatures and sufficient rainfall are necessary for a successful coffee plantation.

This specie is grown in many Asian countries including India and Indonesia, and has branched off into many sub species due to climactic and environmental variations. The plant takes seven months to bloom and mature into usable fruit.

See also  What to Serve with Lentils?

The Coffea robusta is found primarily in the African region, where it is supposed to have originated. As the name suggests, this variety of the plant is more potent than any other and rather easier to cultivate, but takes nine months to fully grow and yield fruit, a little longer than the Arabica variety.

Robusta beans have a distinctive flavor that is usually bitterer due to its pyrazine content. Even though Arabica beans are thought to be superior in quality, Robusta produces a full-bodied flavor that can be used for espresso blends. 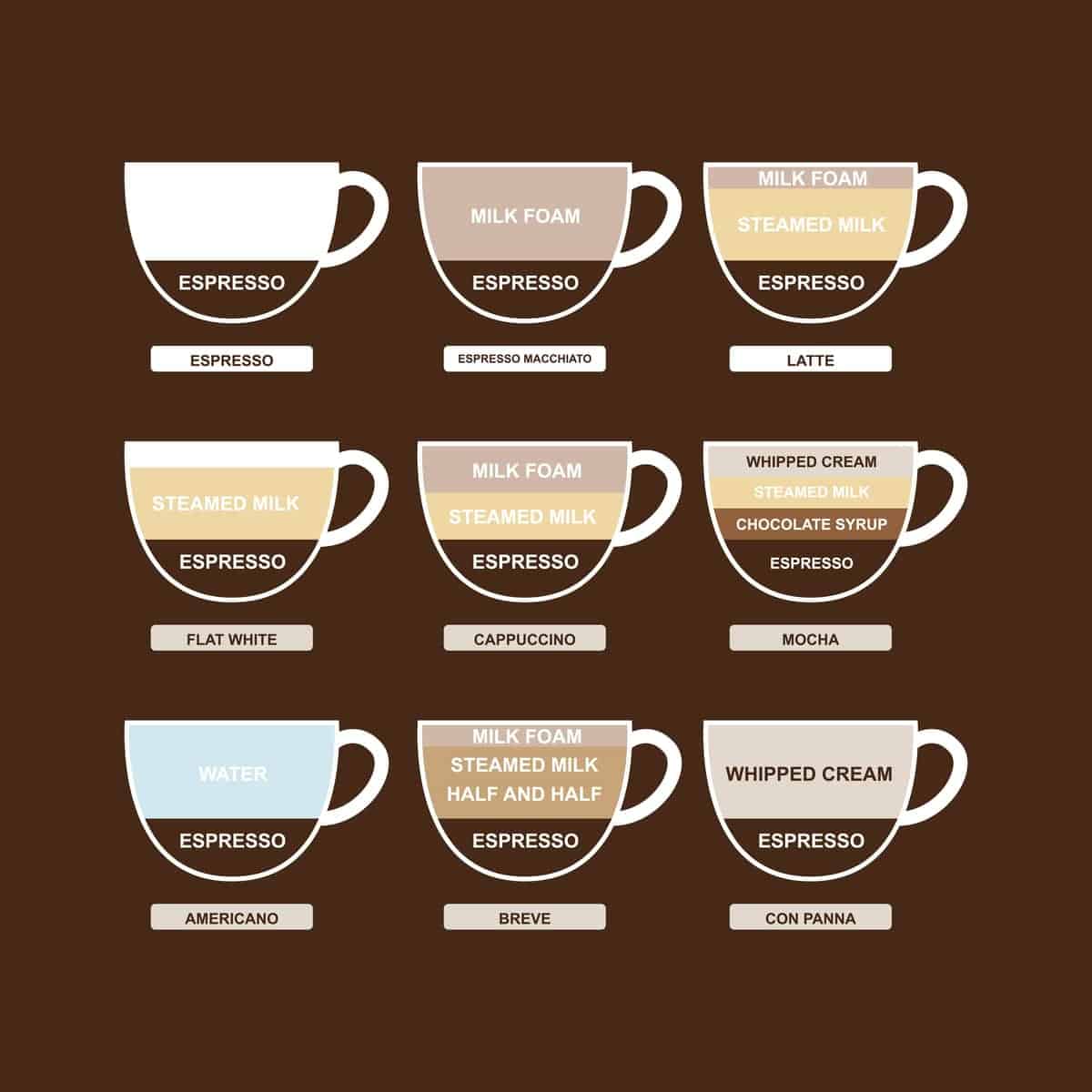 Recognizing and memorizing all the different types of coffees and their constituents can be difficult, so here is a quick guide and a short introduction to the common types you may encounter in your daily life. 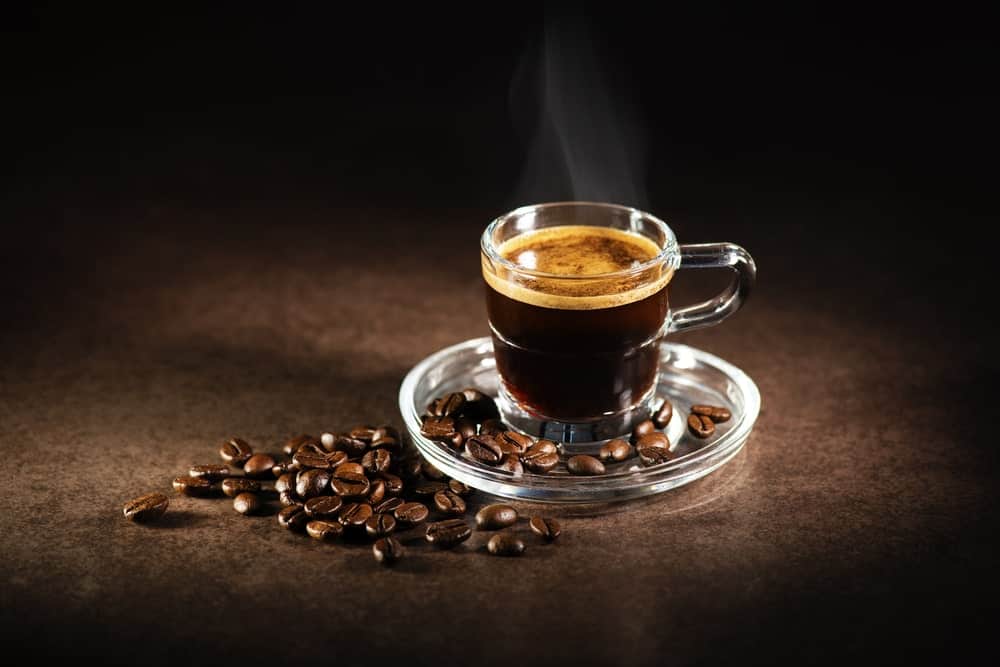 Espresso originates from Italy, and is one of the most intense coffee drinks you can have. So much so, that the espresso drink is often called a ‘shot.’ It is made by forcing boiling water at very high pressures through finely-ground coffee beans. It has the most caffeine volume per ml, but since the serving size is usually smaller, the caffeine amount is less than the standard coffee cup. Because of its drinking method, espresso is bound to give you that kick you need in the morning.

A macchiato, often misunderstood, is a shot of espresso with a bit of foamed milk on top. If black coffee does not appeal to your taste buds but you would still like the effects, a macchiato could literally be just your cup of coffee. The milk is usually very little in amount; just enough to moderate the strong and bitter taste of coffee but not overpower its distinctive flavor. 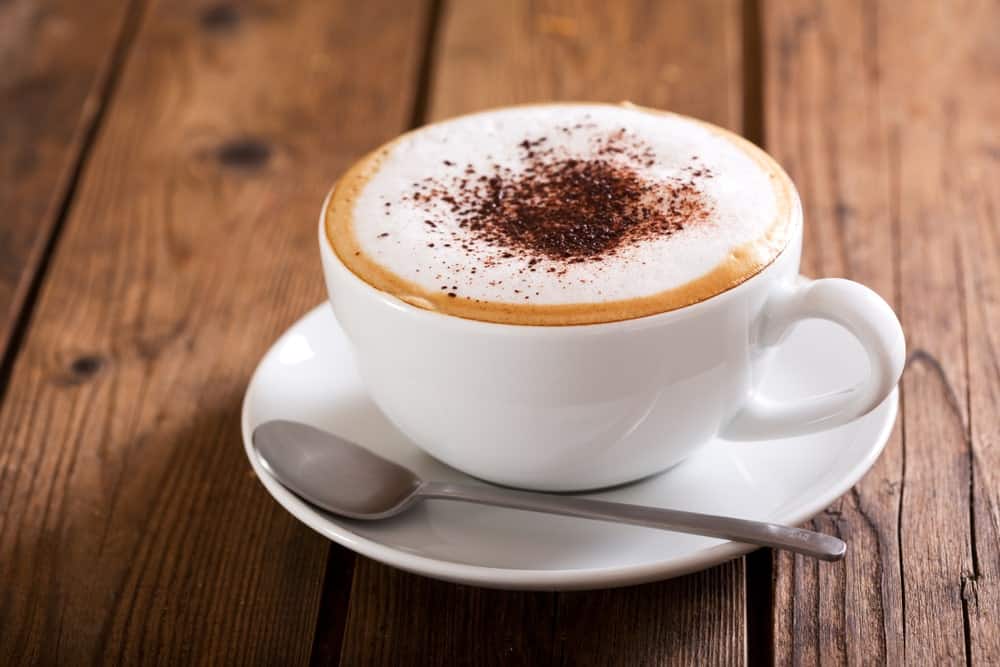 Cappuccino is also an espresso-based drink with added milk, and a layer of foam on top. The espresso to milk ratio, however, is higher than in a macchiato. With the prevalence of upscale coffeehouses, cappuccino gained popularity in North and South Americas.

A variation of the drink contains cream instead of milk, with the added bonus of other flavors, such as caramel, hazelnut, cinnamon, or chocolate powder.

The odds suggest that you might be a fan of chocolate, and if you are, mocha could be your coffee of choice. It consists of espresso, a layer of whipped cream, paired with as much chocolate sauce as your heart desires.

Cafe latte means milk tea, and that is exactly what it is. Made of espresso and topped with a generous amount of steamed milk, lattes have been around since the 17th century.

The flat white coffee is similar to the latte, except that instead of milk it contains microfoam, which makes for a smoother texture. Microfoam is steamed milk with very fine bubbles that give it a velvety consistency. Flat white is said to have originated in Sydney in the 1980s.

Caffe Americano literally means American coffee, and it is made by diluting espresso with hot water. This lowers the strength of the coffee while preserving the espresso flavor somewhat. Some variations include the Iced Americano that uses cold water to dilute the coffee, and the red eye made with drip coffee instead of hot water. 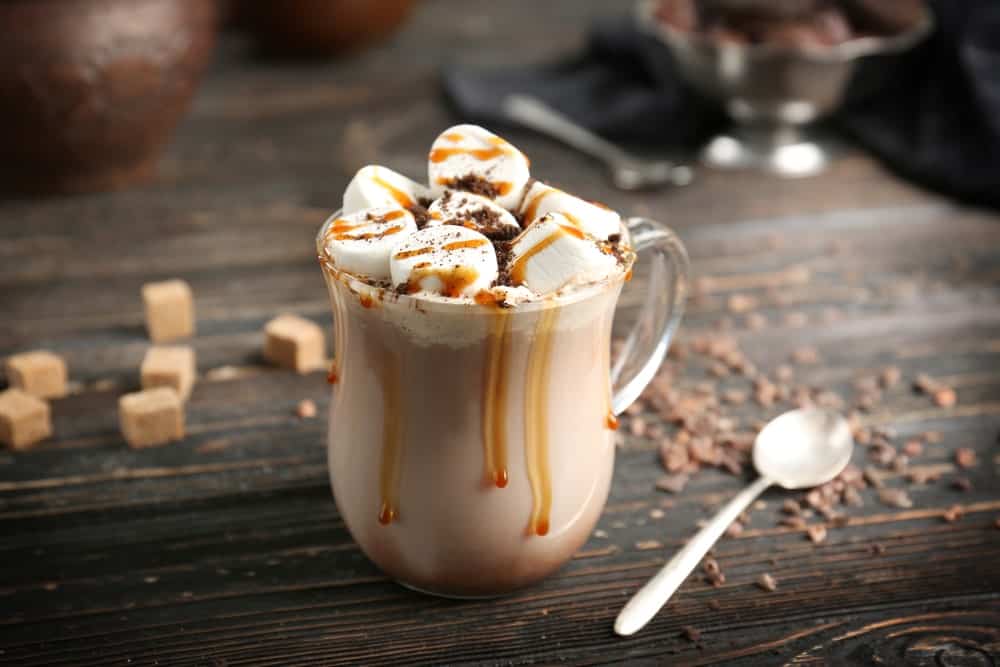 Espresso with cream is quite self-explanatory, made of espresso topped with whipped cream. Some variants can also have ice cream on top. This drink is perhaps older than lattes or cappuccinos and is traditionally served in a demitasse cup in Vienna and Budapest coffeehouses.

Some Fancy Coffees from around the World

Although it may sound unpleasant to some, the Finnish adore their native Kaffeost, which consists of hot coffee poured over cheese curds served in a cup.

In a special copper pot, the Turkish simmer coffee powder and serve the drink unfiltered. The coffee grounds settle on the bottom and are an important part of the drink, as is the special pot, cezve, in which the coffee is brewed.

In Malaysia, a traditional coffee drink is Yuanyang, which is made with three parts black coffee, and seven parts milk tea. This mixture turns out to be the best of both worlds and is fairly versatile since it can be served either hot or cold.

Mexican coffee makers use a stick of cinnamon and piloncillo (cane sugar) in the brewing of this drink. It is especially served in a clay mug, which is said to enhance all different flavors.

Pharisäer is an indulgent German drink made with a tempting mixture of coffee beans, sugar, rum, and often whipped cream and chocolate powder.

See also  What to Serve with Pizza?