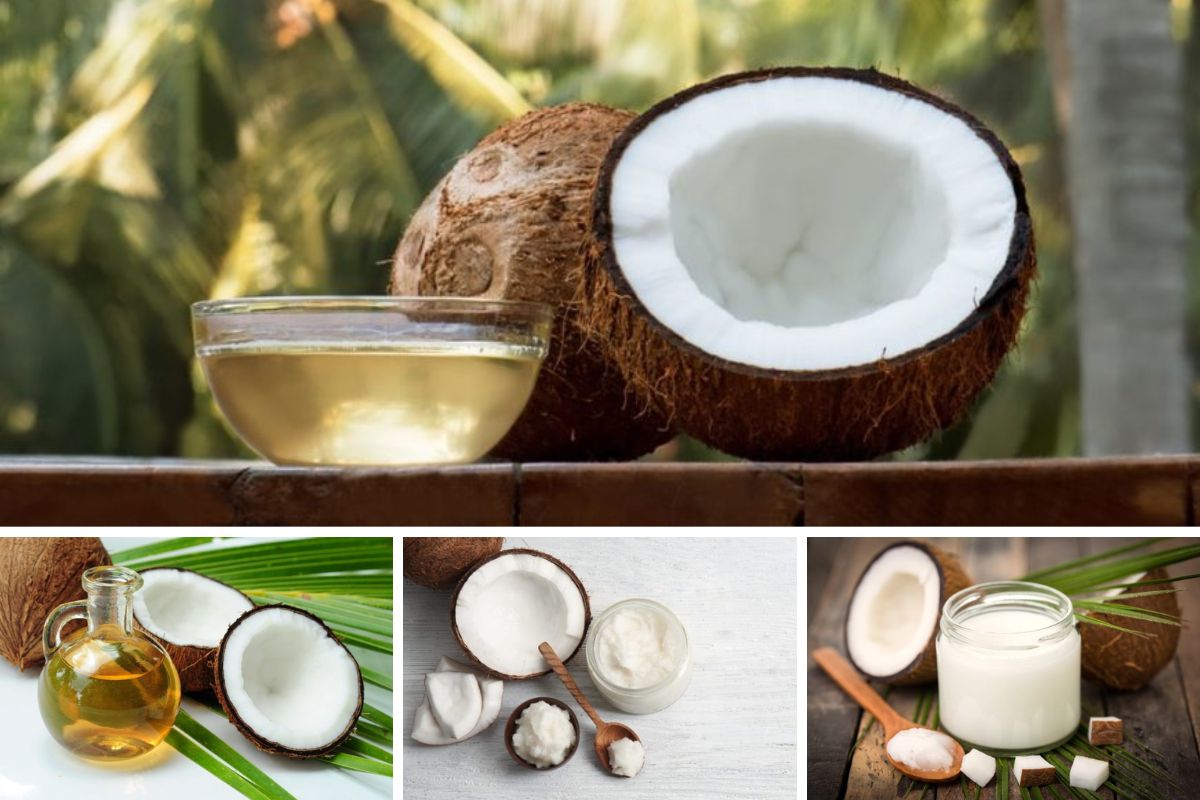 You probably don’t need any convincing as to why coconut oil is amazing. It’s healthy, it smells incredible, it adds a little tropical flair to dishes, and it does wonders for your skin and hair. Not only that, it’s a naturally derived product that is well sustainably created.

I was curious about the details of coconut oil, and was surprised to find out that there are actually 10 different kinds of ways that coconut oil is processed! So I’ve prepared a little list to explain what the differences are between them, which ones to look for, and which ones to avoid.

But first, here are some fun facts about coconuts and coconut oils to get you started…

(Did you accidentally spill coconut oil all over the place? Read this article for tips on how to successfully remove coconut oil!

Coconuts are one of those incredibly diverse and useful foods, every piece of it can be used. The hard shells are useful for decorative and building purposes, the bristle hairs of certain types of coconuts can be used for doormats and mattress filling…

And then there are the ways in which coconuts are used for consumption. Coconut water will hydrate you, coconut meat will feed you, and coconut milk is a wonderful dairy-free addition to sweet and savory dishes alike.

Coconut oil has been used for thousands of years by many different cultures and is the coconut-derived product that we’re going to focus on today. Places like India, Pakistan, Sri Lanka, Polynesia, Papua New Guinea, and the Philippines have had coconut oil as a staple in their diets and beauty regiments for a long time.

Coconut oil is present in Ayurvedic medicine and is often taken daily to help build immunity against illnesses or to help hasten recovery. It is also said that coconut oil when swished around in the mouth, is excellent for maintaining the health of gums and teeth.

And if all of those things weren’t enough to convince you that coconuts are a superfood, coconut oil is also highly beneficial when used as a hair mask or as a skin moisturizer. There are even historical records showing that people in Papua New Guinea have used coconut oil to keep healthy skin and hair for many centuries. 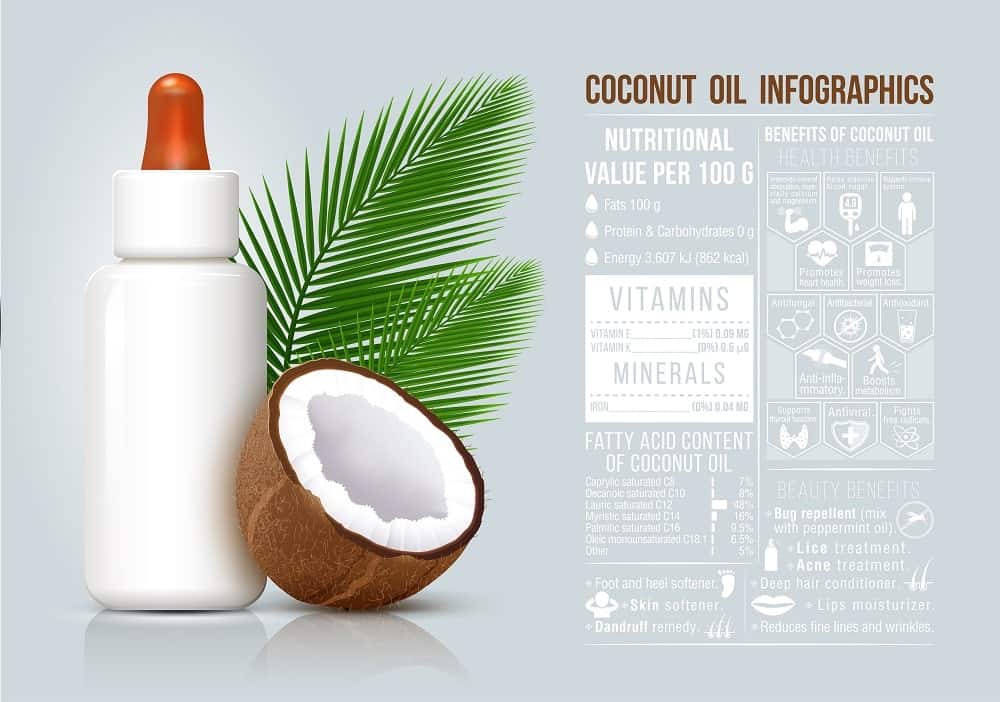 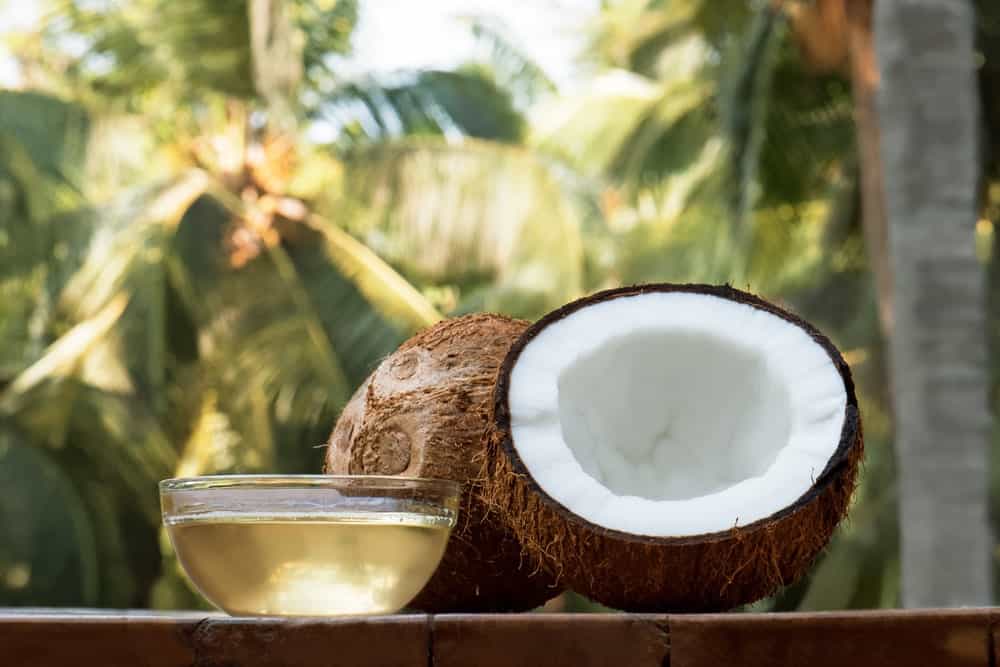 Since this type of coconut oil is unrefined, it is a rather unstable product — it won’t have as long of a shelf life as other processed products. You’ll be able to tell it has gone bad due to a pungent odor and a change in color. Try to use your virgin coconut oil for cooking and cosmetics before it reaches this point.

Raw or unrefined coconut oil is made from fresh, raw coconut meat. This oil is extracted through a wet-mill or a quick-dry process.

Wet milling means the coconut meat is processed into coconut milk, which is quickly brought to boil, strained, and fermented. The milk is then separated from the oil through a centrifugal process.

Quick-drying means drying the coconut meat very quickly and then mechanically squeezing out the oil from it.

Since this oil is not subjected to high temperature, it means much of its beneficial enzymes remain intact, and it retains its flavor. The process also does not involve bleaching or adding preservatives. It is clear when it liquid form and milk-white when it solidifies. 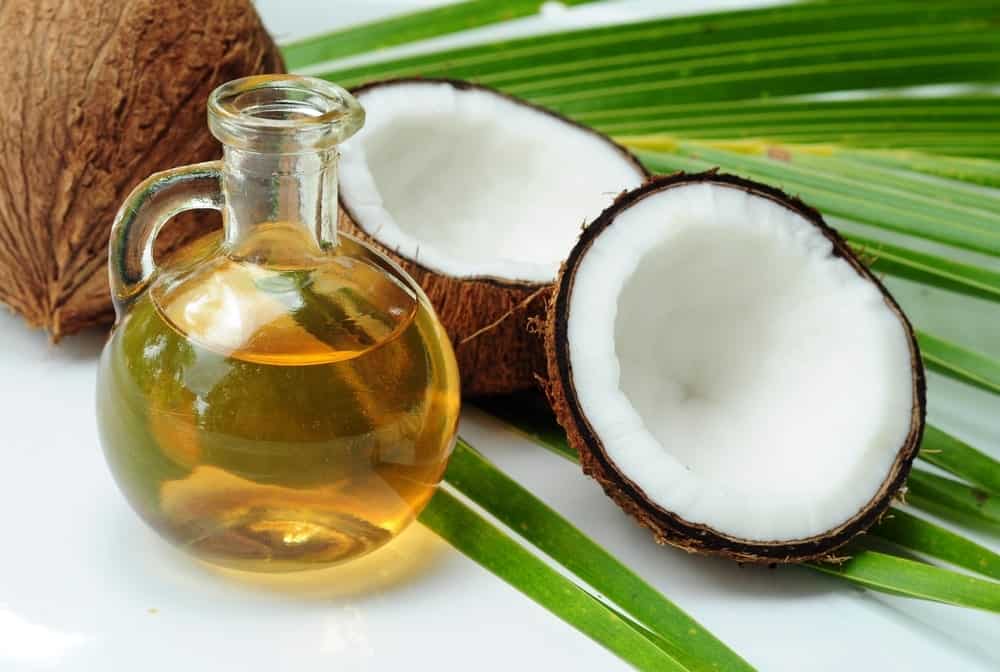 Unlike raw coconut oil, refined coconut oil is derived from dried coconut kernels, called “copra.” Oil produced from copra needs to be treated for contaminants produced by the desiccation process. This requires the oil to be subjected to high heat and be treated with preservatives and other additives.

The resulting oil is less flavorful than unrefined oil but has a higher burning point, which makes it excellent for cooking food at high heat. However, when buying coconut oil, make sure that the oil has been refined by using friction or centrifuge.

If the label indicates that preservatives like sodium hydroxide have been used in its processing, that product should be avoided.

Sometimes, the refined coconut oil that we just discussed, is also partially hydrogenated. This means that the oil is subjected to high heat and high pressure, and has nickel and hydrogen molecules added. All of this processing is so that the coconut oil has a longer shelf life.

Hydrogenated coconut oil can remain in soil form at warmer temperatures, and is often used for making confectionery products. However, this is a lesser healthy option, and this processing encourages a large number of trans fats and saturated fat. 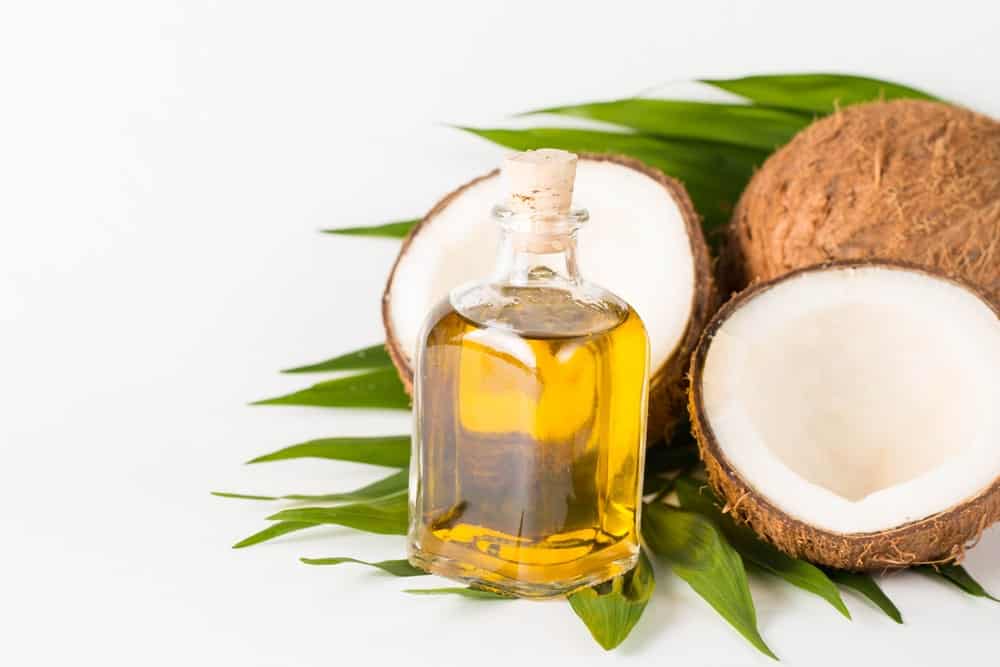 When you see that coconut oil is of the organic variety, that indicates that the farm on which the coconuts are grown are done so without pesticides or the use of GMOs. This is a great product to invest in because it is a more natural product, and most of its nutritional value is maintained.

However, since coconuts are grown in very tropical and usually rather remote places, the likelihood that the coconuts are organically grown is rather high, but it won’t always be labeled as so. If it has been approved by the USDA as being organic, that’s when you can be sure.

Expeller-pressed coconut oil is derived from a mechanical extraction process but does not involve chemical or solvent extracts. Instead, the oil is extracted with high temperature and high pressure.

Because of the intense heat, the fatty acids break down and strip away many of coconut oil’s nutritional benefits. It also has a lighter taste than raw or virgin oils and a higher smoke point which makes it a good choice for cooking.

However, it does not contain lauric acid, which has numerous antifungal, antibacterial, and antiseptic benefits. Hence, fractionated oil does not have all the health benefits associated with other kinds of coconut oil.

RBD stands for refined, bleached, and deodorized coconut oil. Unfortunately, this is the worst possible type of coconut oil for health purposes.

To get this highly processed oil, the coconut oil is subjected to a long series of purification and processing; the extracted crude oil is treated with alkali to remove fatty acids, then subjected to steam and vacuum to get rid of all flavors and odors. It is then filtered with carbon to remove the yellow color.

Even though RBD coconut oil is high in saturated fat and saturated fatty acids (which cause risk for heart disease), and it does not have a distinctive coconut taste, it has many fans and is used in the food and cosmetic industries due to its cheap price and long shelf life. 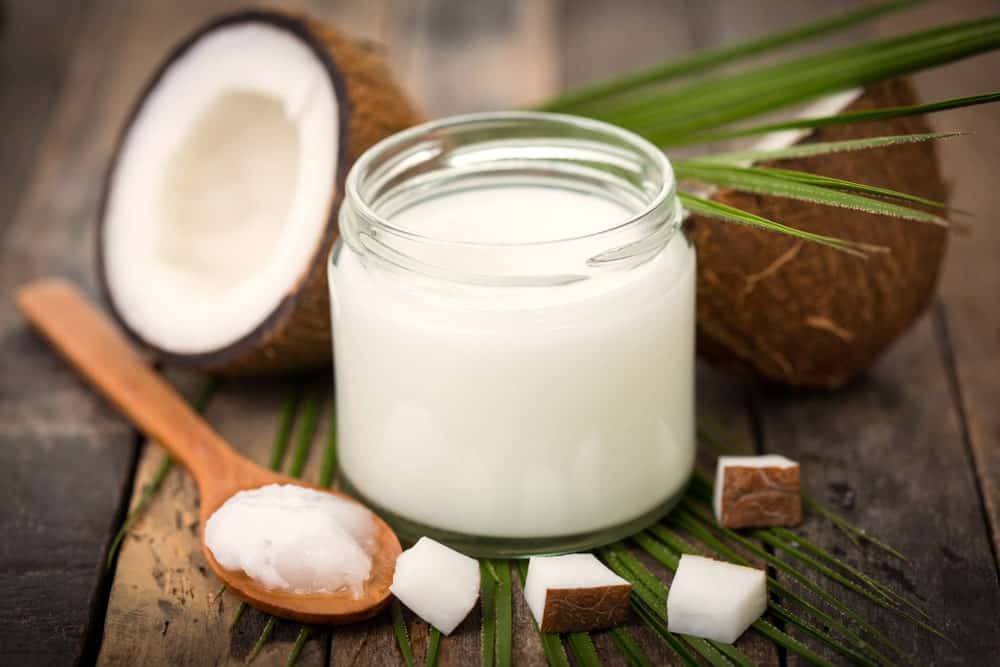 This terminology is quite misleading because 100% pure can be used to define two vastly different categories of coconut oils. The first is 100% pure-natural oil, which is subjected to minor treatments to retain purity in natural ways.

The second one is 100% pure-refined oil, which is not considered “pure” at all by the consumer market definition. That’s because the “purity” is achieved by processes like RBD, which amounts to stripping away beneficial fatty acids, flavors, odors, and colors.

If you want to buy 1005 pure coconut oil, make sure it is of the former variety and not the latter. However, natural coconut can lose its purity if it is not properly processed. The processors may leave free fatty acid content and high moisture in the oil which could make it unstable and unpalatable. 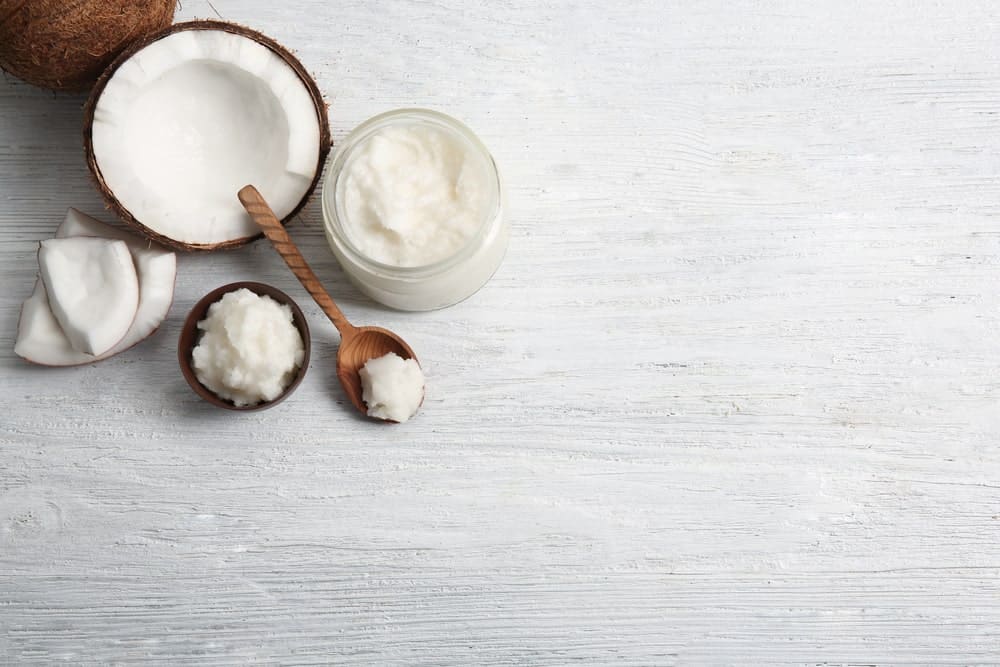 As the name indicates, this coconut oil can be extracted at your home. It is yellow in color and has a very strong taste and aroma.

This oil is obtained by boiling coconut milk until all the water content is evaporated. The oil left behind with some solid matter is the traditional coconut oil.

Alternatively, you can also ferment coconut milk for two days to release oil. The oil is then heated to remove the remaining moisture. It is best to consume homemade coconut oil immediately, as it has a very short shelf life.

However, all the things that are best for you tend to have a short shelf life.

How amazing would it be to have a palm tree in your backyard and drink fresh coconut water every morning?

Are coconut oil and coconut butter the same thing?

Not quite. The difference between coconut oil and coconut butter is similar to the differences between peanut oil and peanut butter. They’re both derived from the same nut, but made into different products.

Which coconut oil is best used as cooking oil?

Why can coconut oil be bad for you?

Because it is about 90% saturated fat. As a reference, butter has about 65% saturated fat. The reason why this can be bad for you is that it raises LDL cholesterol levels which contribute to the risk of heart disease.

Yes, it can. Most oils applied to the face have the potential of clogging pores. The risk of getting pimples from applying coconut oil to the face is less likely if one’s face is drier, as opposed to a person with very oily skin.

It is certainly possible! If you use virgin coconut oil, it is possible that the vitamins and essential fatty acids in it nourish your scalp.