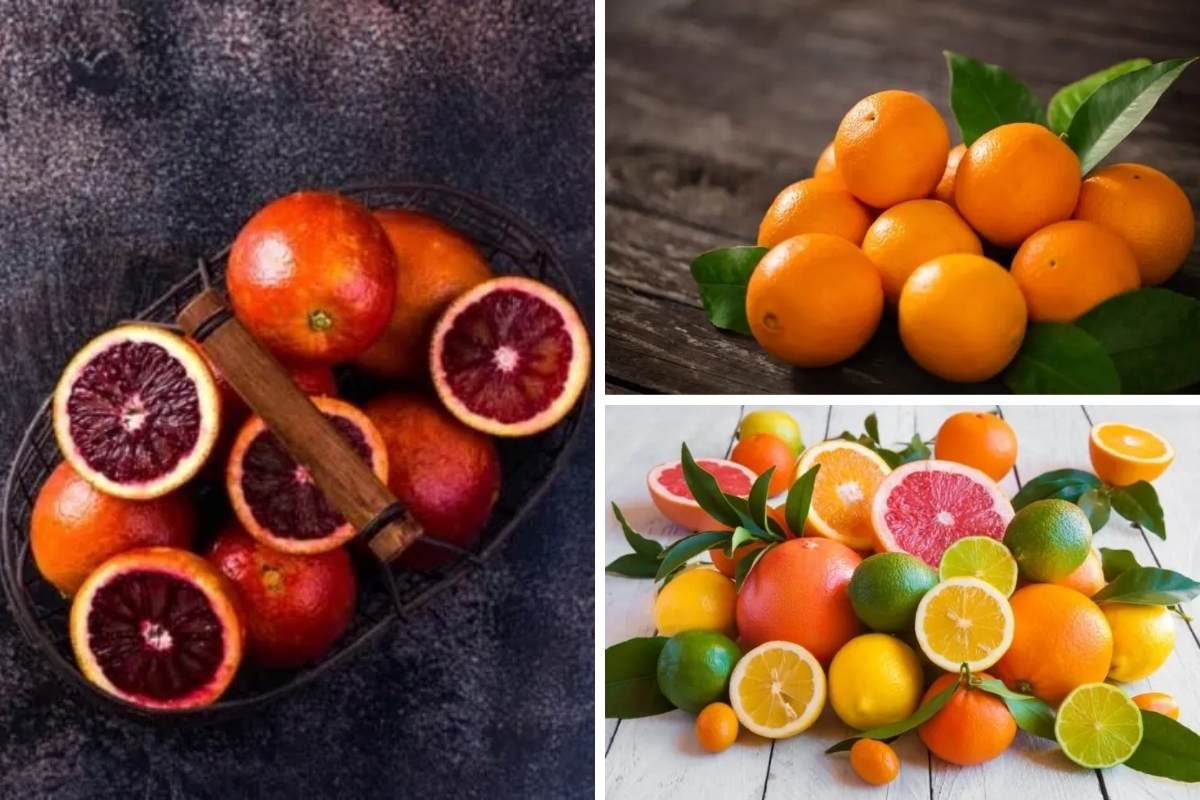 Who doesn’t love the tangy, Vitamin C-imbued fruity goodness that describes the many varieties of citrus fruits? The perfect combination of sweet and sour, this class of fruit is the most favored and sought after in the entire world.

Citruses are so beloved that humans have created dozens of delicious varieties.

The citrus family is native to the tropical and subtropical regions of Asia and the Malay Archipelago. The large varieties of citrus fruits we see today evolved from tiny berries over millions of years.

The first member of the citrus family came to Europe around 310 BC and remained as the only citrus fruit there for several centuries. During that time, it is believed that limes, lemons, and oranges were gaining popularity in Italy.

In China, sweet oranges were in an advanced stage of cultivation before they were introduced in Europe, as evident by Han Yen-chih’s “Monograph on the Oranges of Wên-chou, Chekiang,” which described 27 varieties of oranges and other citrus fruit. 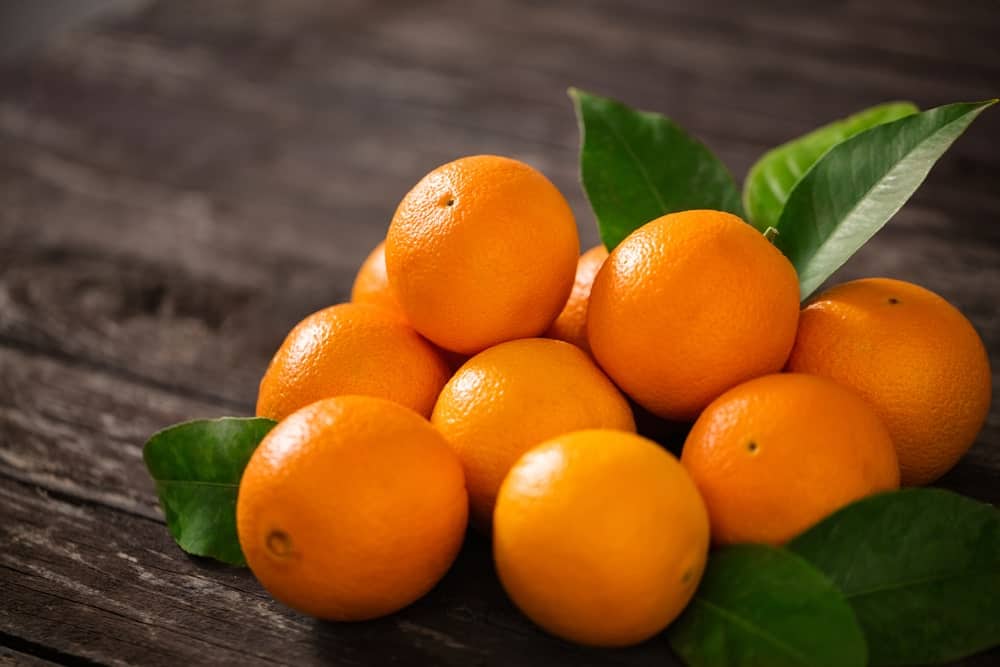 Also known as sweet orange, this species of citrus is a hybrid of a pomelo and a mandarin. The juicy fruit grows in tropical and subtropical climates and has been around for millennia.

The earliest written record of oranges was found in Chinese literature from 314 B.C. In 1987, it was found that oranges were the most cultivated fruit in the world. 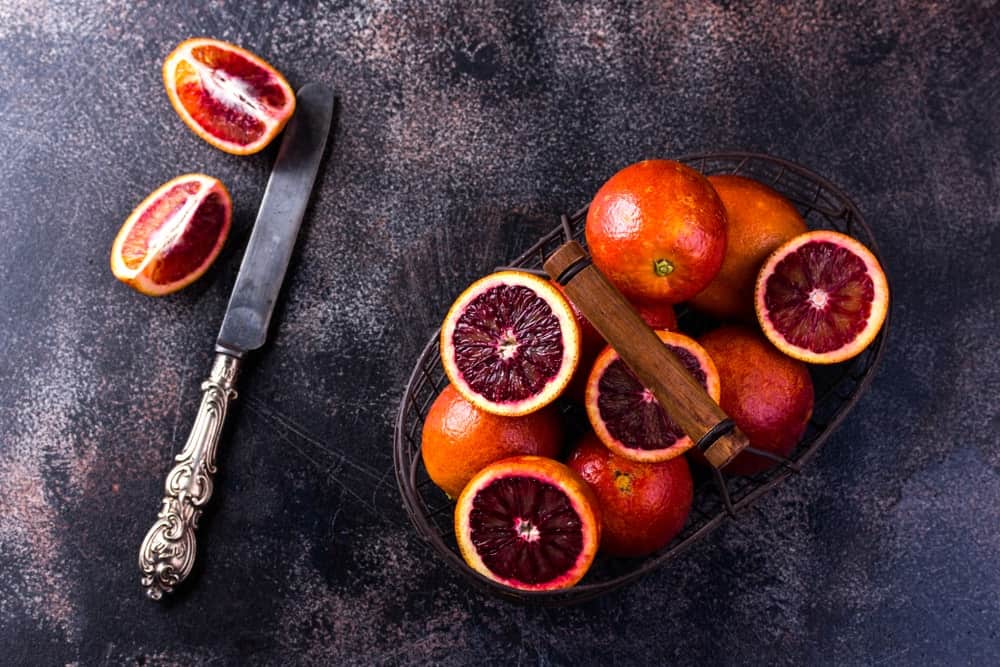 Also simply known as mandarin or mandarine, mandarin oranges closely resemble the common sweet orange variety. Instead of the spherical shape of common oranges, mandarin oranges are oblate. They are also sweeter and less sour than oranges.

The fruit is believed to hold medicinal properties in Chinese culture and is eaten to treat abdominal and phlegm related issues. They are also traditional symbols of abundance and luck and are prominently displayed during the Chinese New Year. 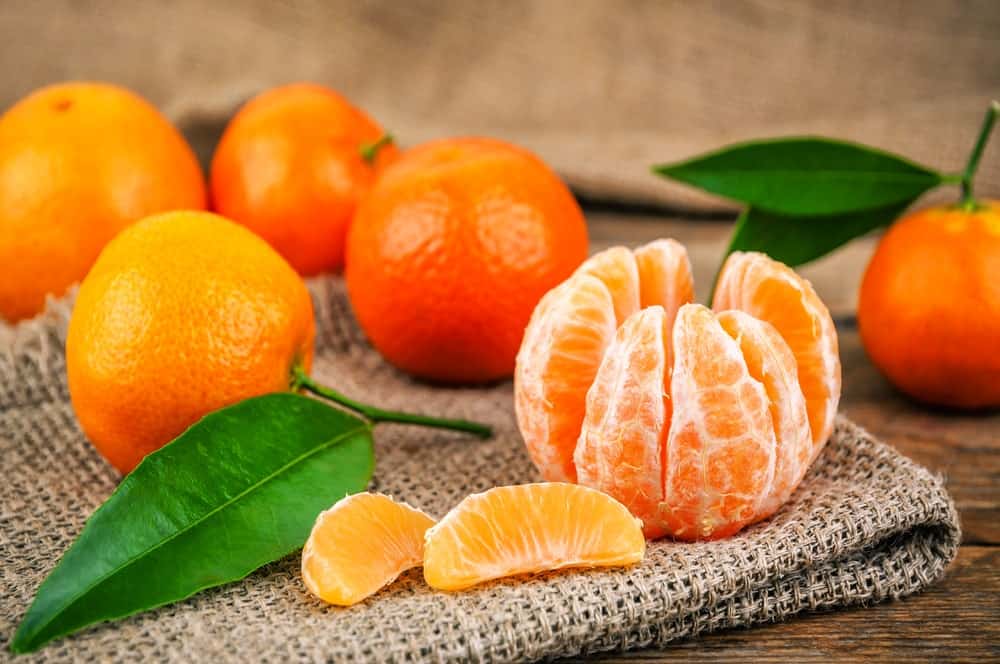 The tangerine is said to be a hybrid of the mandarin orange, containing some pomelo DNA. Due to which, it is a variety of famous Clementine. The citrus is just one class of the reddish-orange mandarin variety. It is named so because it first came from the seaport of Tangier in Morocco.

This type is much sweeter than the common orange variety and has lower acid concentration levels. Some varieties, like the Clementine, are seedless and have a loose rind that is easy to peel. 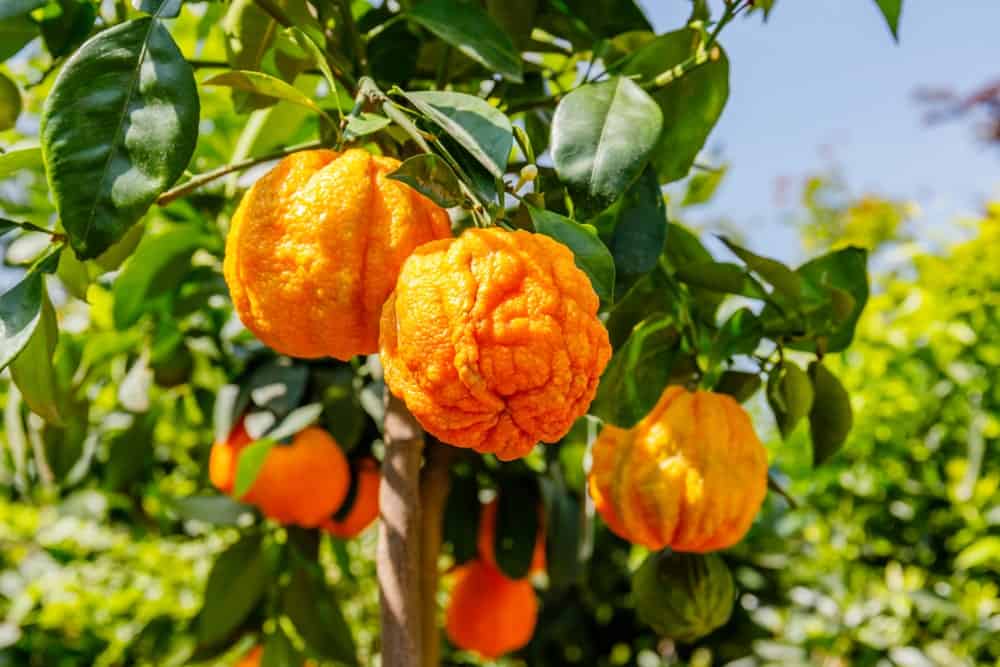 The sinister-sounding name of the blood orange actually comes from the deep crimson pulp of the fruit, which is a result of anthocyanins, an uncommon antioxidant in citrus fruit.

Sometimes, the dark reddish tone also bleeds into the rind of the fruit, which is very thick, tough, and hard to peel.

The blood orange is a natural mutation of the orange and has a distinct raspberry-like taste, in combination with the usual sweet and tart flavors of citrus fruit. Because of this, it is often made into marmalade, salads, and Italian soda. 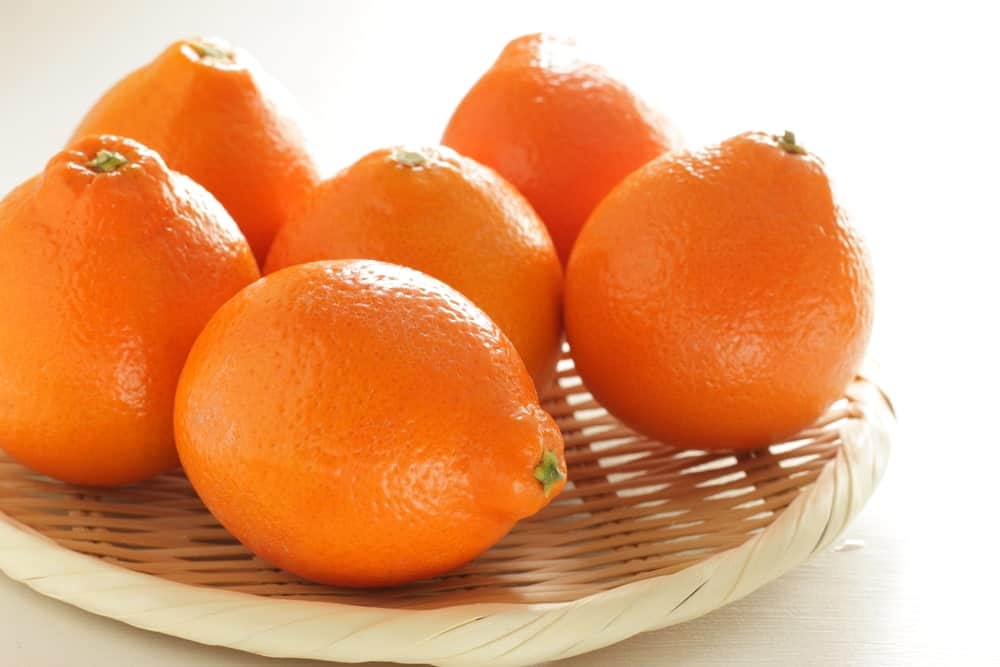 The Tangelo is a cross between a grapefruit and a mandarin. Sometimes called honeybells, they are easily distinguishable because of a characteristic knob at the stem. These citrus fruits have loose skin that is easy to peel off and is extremely juicy with a tangy, tart flavor.

Their sweet flavor makes them a viable cooking substitute for mandarins and sweet oranges. 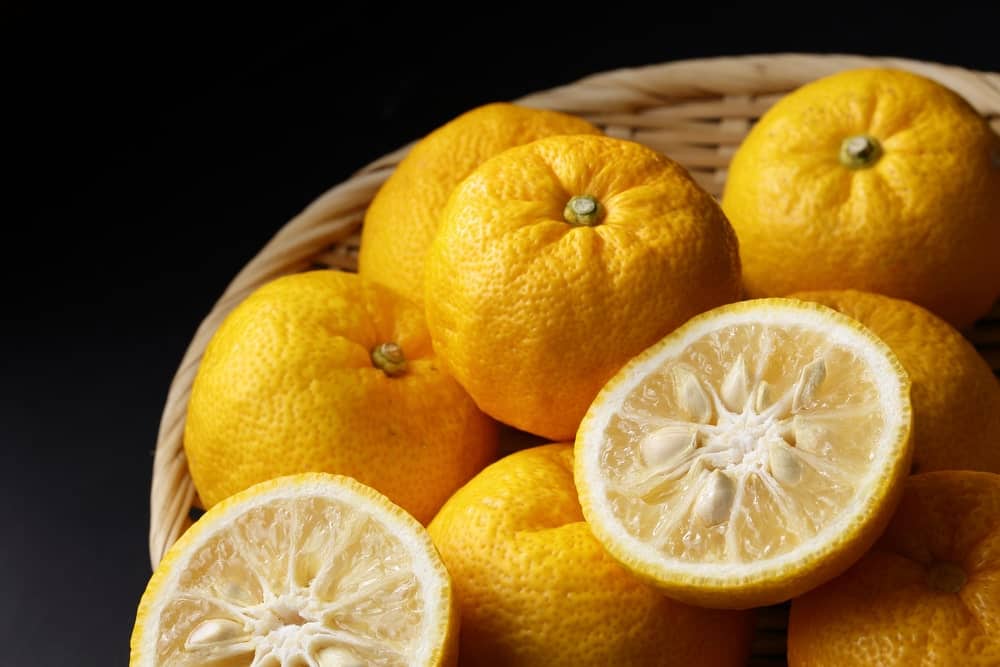 As the name suggests, this variety of citrus is very sour and bitter, so much so that most people cannot eat it fresh. Bitter orange is a cross between the mandarin orange and the pomelo and has a wrinkled appearance.

Its sour flavor results from acidic juices while the bitter taste arises due to the essential oils that are present.

Bitter oranges, also called Seville oranges, are commonly used in the production of marmalade and are also a key ingredient in the orange-flavored liqueur, triple sec. 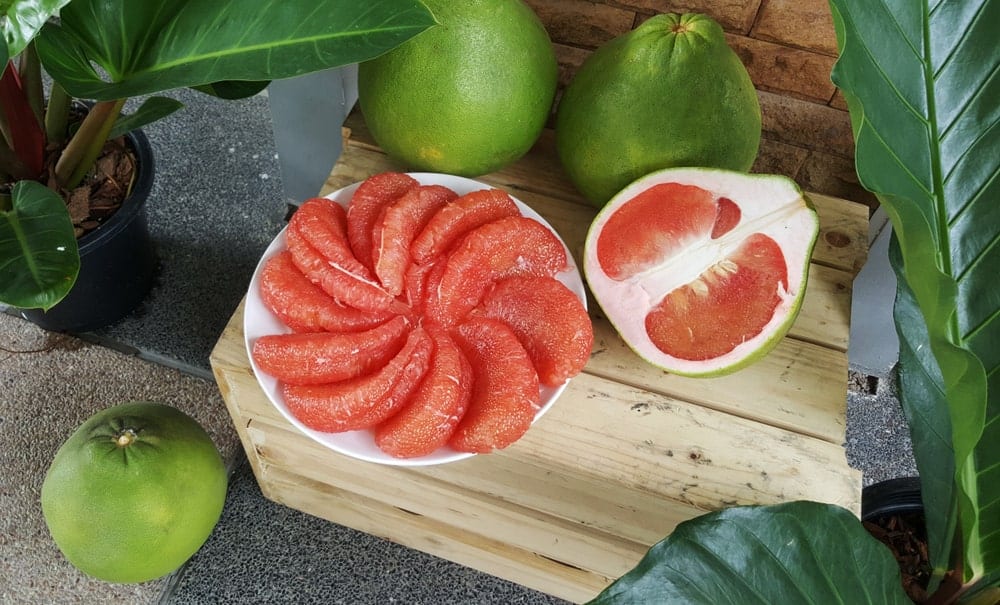 Yuzu or Citrus junos is similar to a small grapefruit with wrinkled skin. It is highly aromatic and can be yellow or green in color, depending on how ripe it is.

The yuzu has a tart flavor, much like the grapefruit, and has overtones of mandarin, although a Japanese variety called yuko is sweet.

The yuzu is rarely eaten as a fruit; instead, its rind and juice are used in Asian cuisines, including recipes for ponzu sauce, yuzu tea, sweets, and drinks. The sharp oil in its rind is used to make perfume.

In Japan, whole yuzu fruit is floated in baths during the winter solstice, as a way to release their aroma. 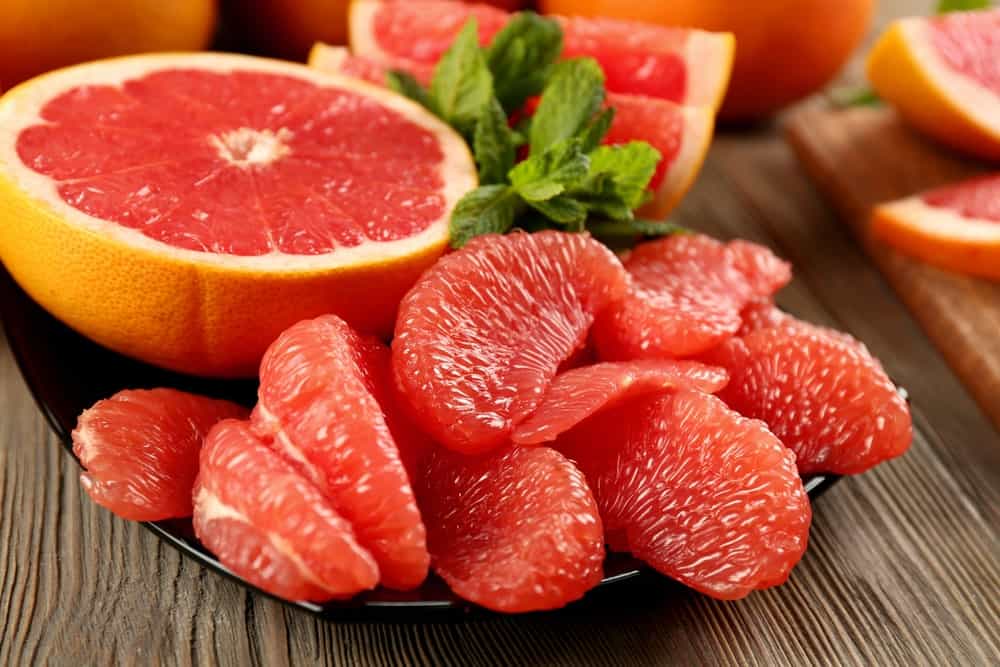 The grapefruit is believed to be an accidental hybrid of the common orange and pomelo. The citrus is called grapefruit because it grows as a part of a cluster of fruit on its tree, similar to a grape cluster.

Much-favored citrus fruit for breakfast, the grapefruit has a sour to semi-sweet, often slightly bitter taste. The fruit’s pulp may be white, pink, or red in color, depending on its cultivars.

In Caribbean countries, grapefruit is used to make sweets. 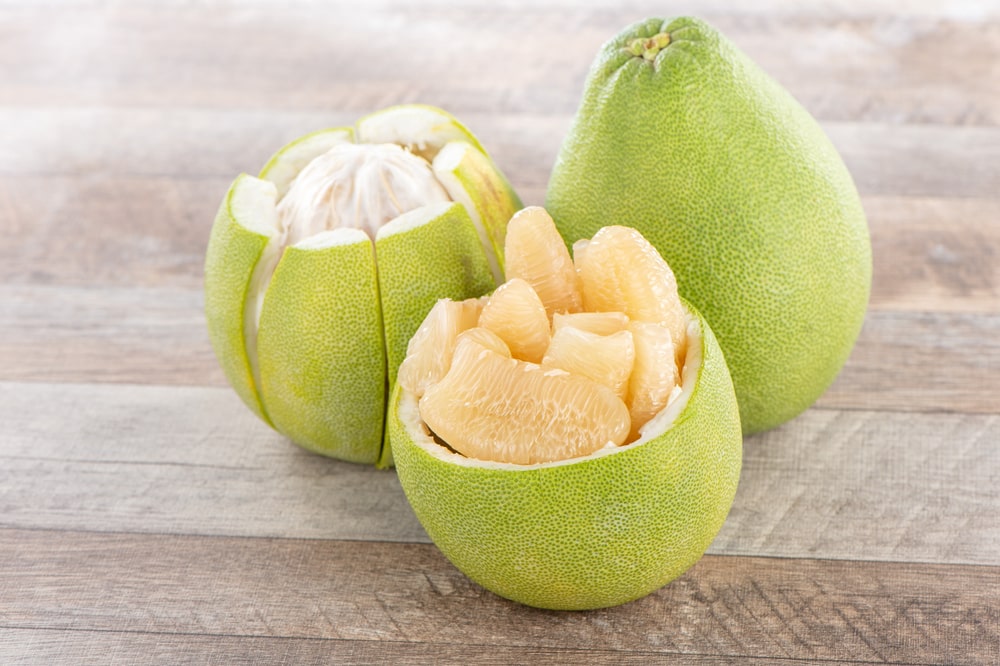 Pomelo, pummelo, or shaddock is one of the original citrus species — along with citron and mandarin — which gave birth to hundreds of other citrus species that we see today.

The fruit is generally pale-yellow to light-green in color and is quite large, weighing about 2-4 pounds. It has sweet white — and less commonly, pink or red — flesh that has a sweet flavor, like a mild version of the grapefruit. Though, it does not have the bitterness of the grapefruit.

Sometimes, pomelo rind is used to make marmalade or dipped in chocolate. It is also used in aromatic baths. 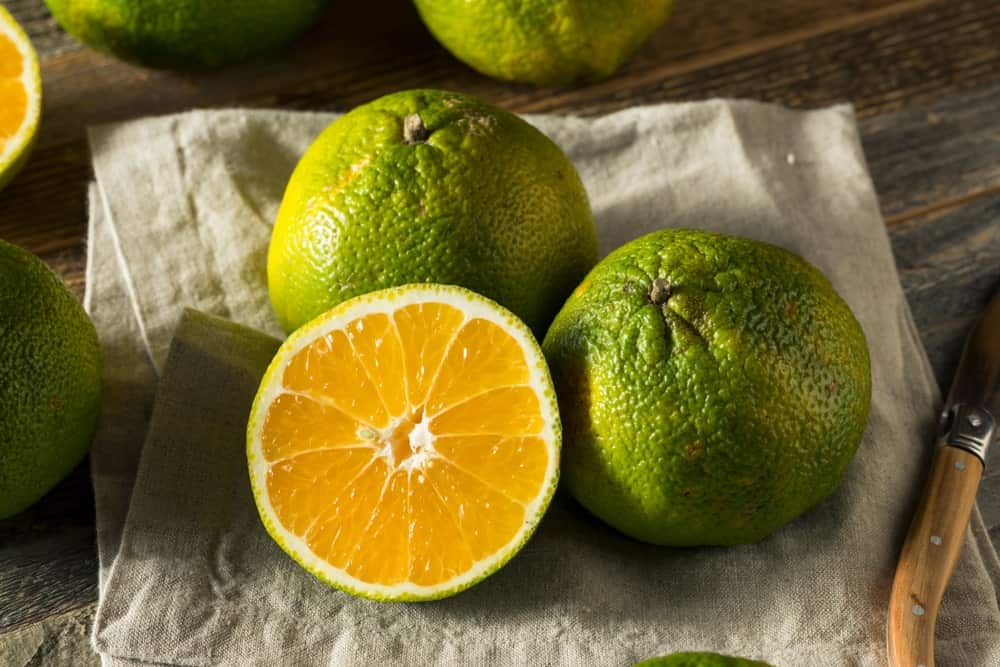 Also known as the Jamaican tangelo, ugli fruit, or uniq fruit, this citrus may look ugly from the outside, but don’t let its appearance deceive you.

It is one of the most delicious types of citrus created by crossing an orange, tangerine, and grapefruit. The result is a juicy fruit with all of the sweetness of tangerine, none of the bitterness of a grapefruit, and a very fragrant rind. 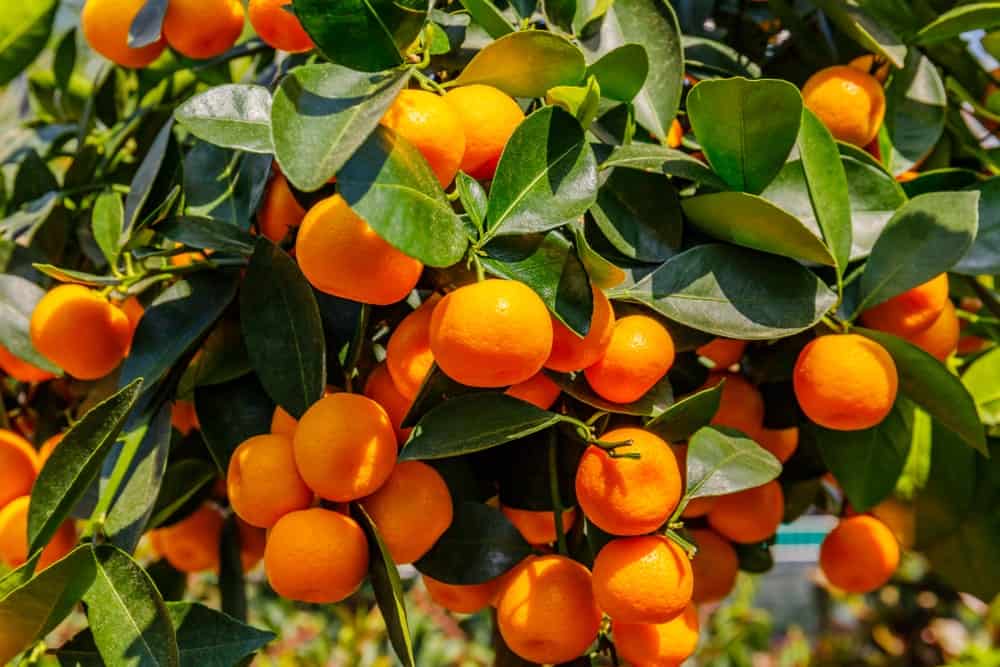 This yummy citrus fruit is very similar in color and taste to the sweet orange but is much smaller in size, like a large olive. The name kumquat means “golden tangerine” in Cantonese.

The Japanese variety is eaten whole, both rind and pulp. That is because the skin is very sweet but the pulp in the center is quite sour. Consuming it whole creates a tart, refreshing taste. It is also used as an ingredient in marmalades and multiple desserts. 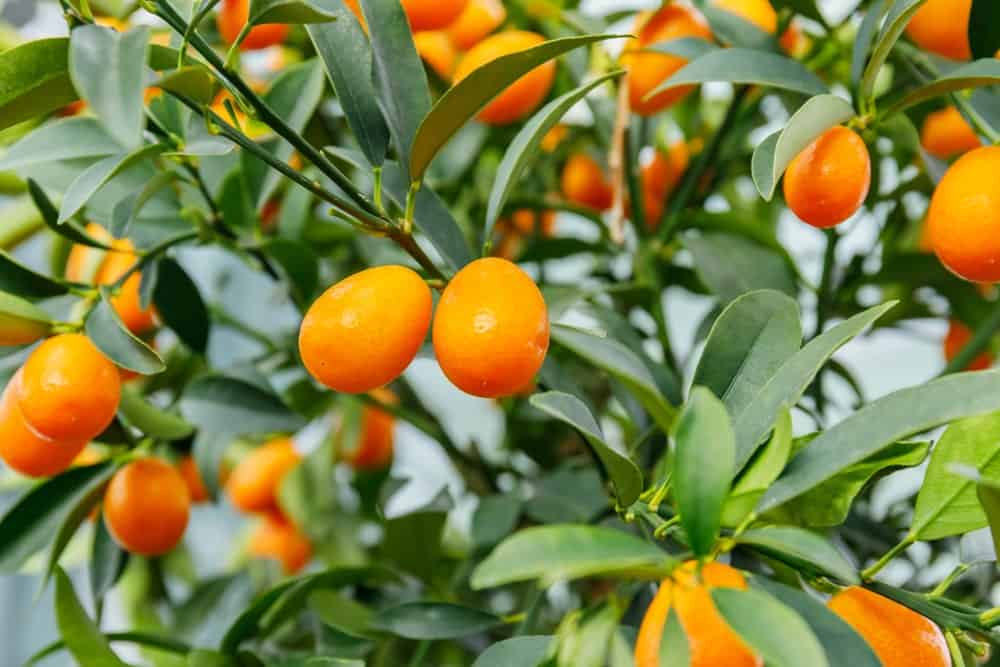 Again, we are back to square one. Citron is one of the original citrus fruit species that gave birth to all the other citrus species. It has a thick rind and is very fragrant. Unlike other species of citrus, its pulp is dry. However, that doesn’t mean it is not used anywhere.

Citron rind is often candied and used to make sweets. It also has a lot of medicinal uses such as combating nausea, skin diseases, hemorrhoids, and ejecting parasites from the body. 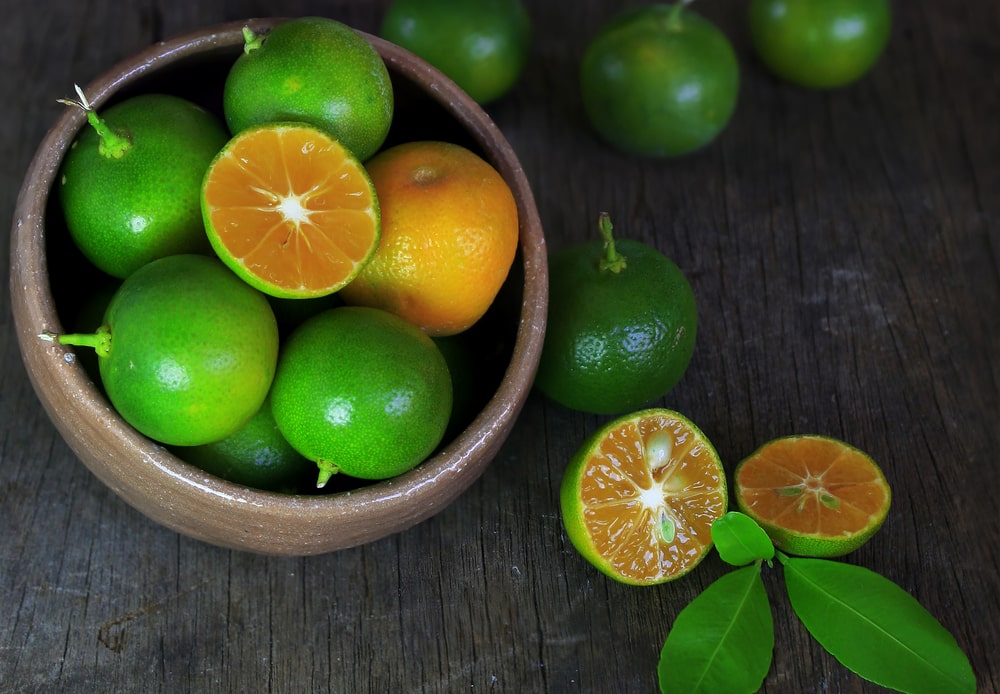 Also known as calamansi, the small round citrus fruit has reddish-orange, thin skin and juicy acidic flesh. The fruit is a hybrid of kumquat and mandarin orange. The pulp is quite acidic and sour (although the peel is sweet) and is most commonly used in cooking or in making preserves.

In Asian cuisine, the sour pulp is used to marinate fish, pork, and fowl. The Floridian variety of the calamondin has undertones of apricot, tangerine, lemon, guava, and pineapple. 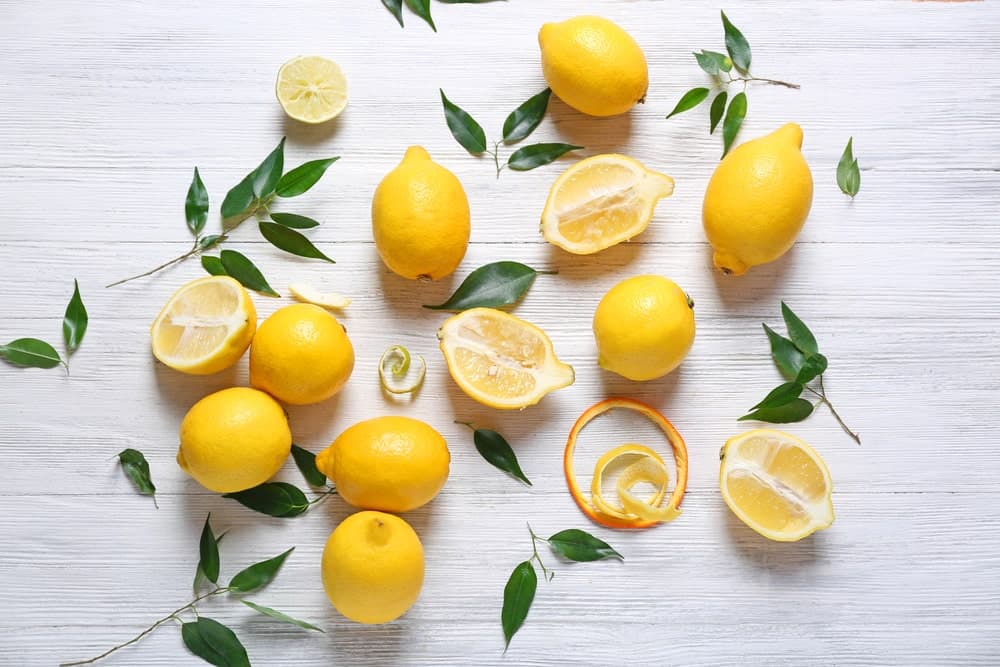 “When life gives you lemon, make lemonade,” they say. The old adage is a nod to the unique and extreme sour taste of the citrus fruit. The sour taste is due to high levels of acid in its juice that makes it a cleaning agent as well.

The small, yellow fruit has a wide variety of uses and is used in baking, cooking, aromatherapy, and cleaning — and of course, making lemonade. 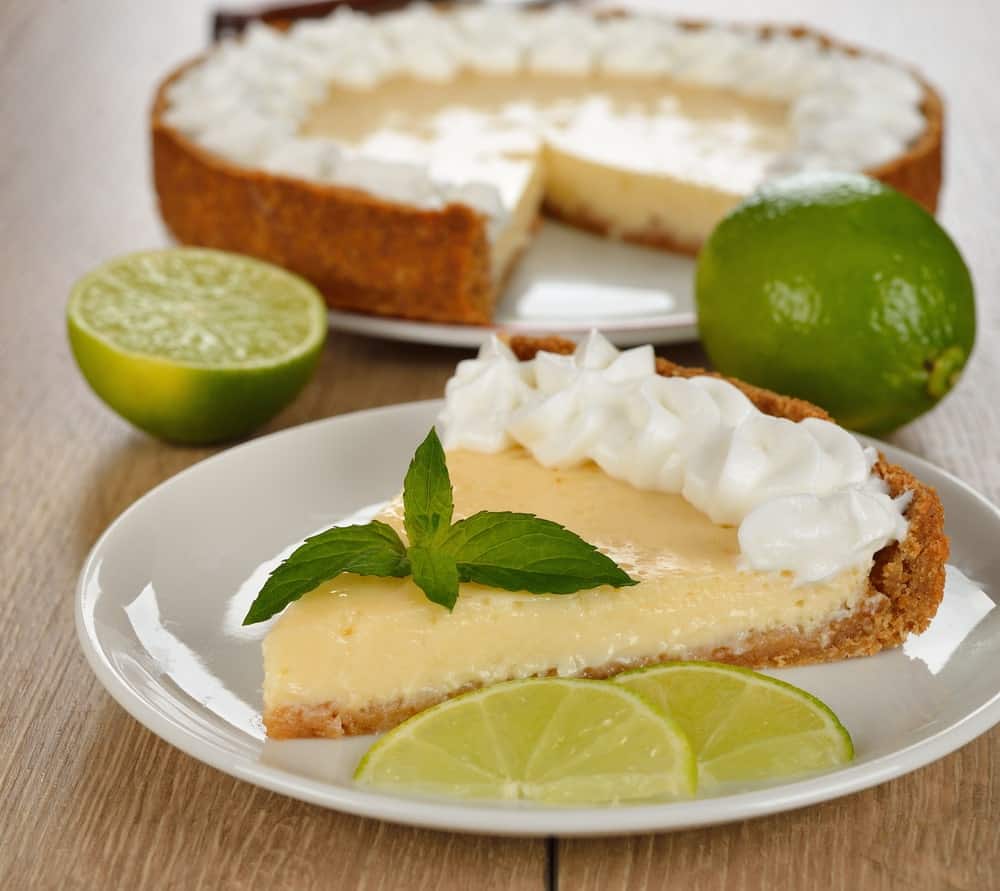 Who doesn’t love key lime pie? The small, yellow fruit from which this heavenly dessert is made resembles the lemon in appearance. It is usually green when picked but becomes yellow when ripe.

Unlike the very sour lemon, this lime has a sweet flavor and is highly aromatic. In the Middle East, the fruit is boiled in brine and then dried to make a condiment, called black lime. 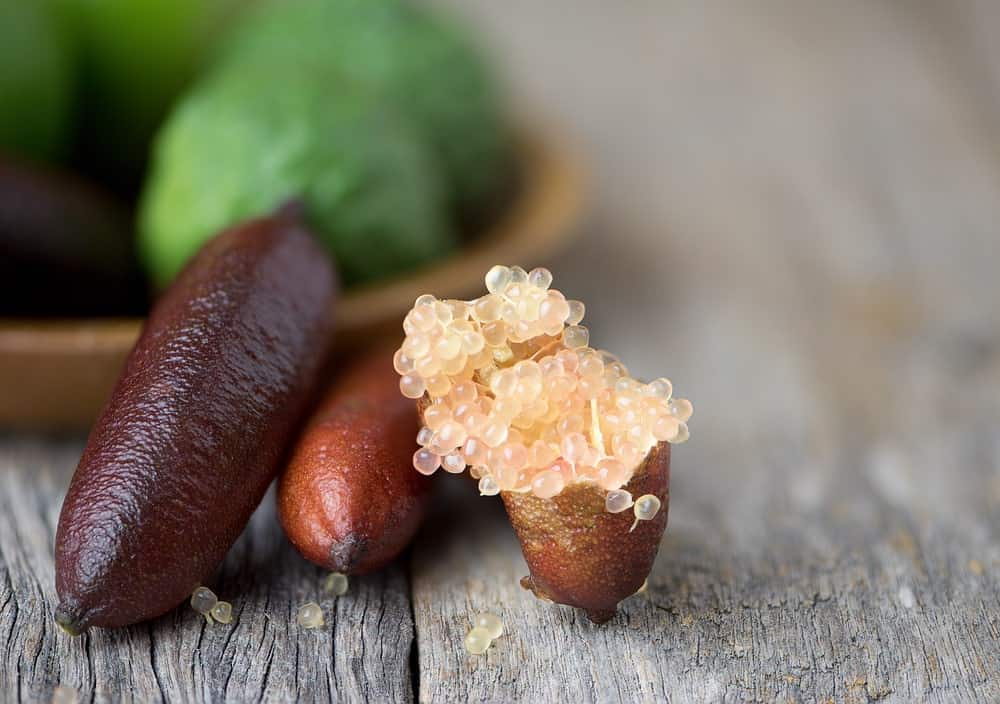 The Australian finger lime also called caviar lime, like its name, is an elongated lime that resembles a finger. When cut open, this unusual citrus fruit reveals globular juice vesicles that look like fish eggs or caviar.

These pearls or vesicles give a burst of effervescent sour and tangy flavor that is similar to that of lime. Because of this, it is used in making pickles and boutique marmalades. Finger lime peel can also be removed, dried, and used as a flavoring spice. 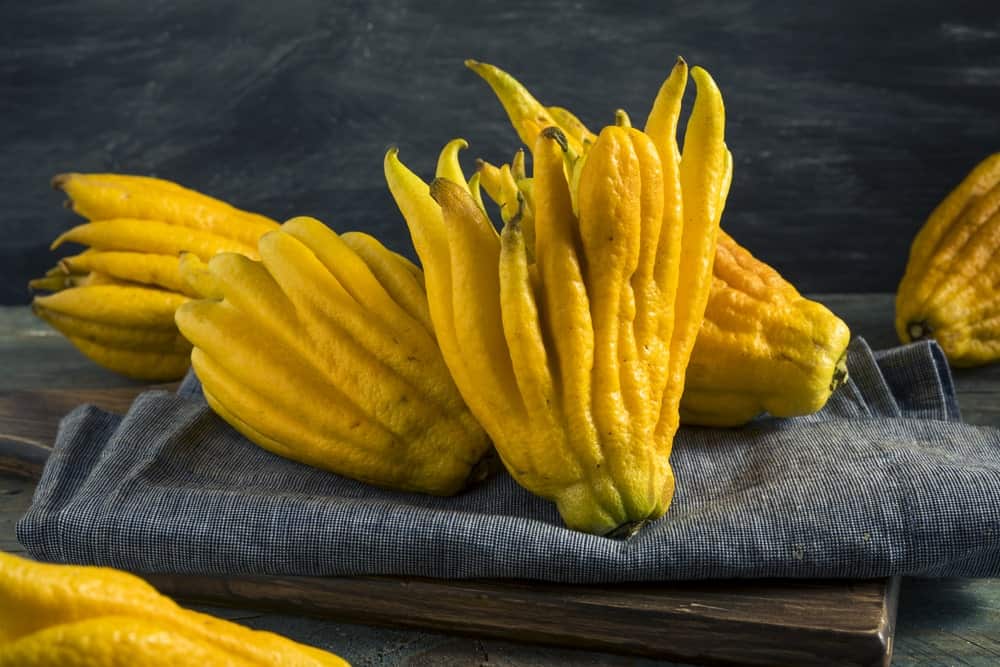 The creepiest looking citrus fruit in this list, Buddha’s hand, is named so because of its resemblance to the fingers seen on Buddha depictions.

Buddha’s hand is a variety of citron that can take many forms, like close-fingered, open fingers, and dwarf-fingered variety. The strange fruit does not have pulp or juice, so only its zest is used to make dishes, desserts, and liqueurs.

In China, the fruit is a symbol of good fortune and longevity and is a traditional temple offering on New Year.

Apart from being delicious, citrus fruits have a whole host of other benefits, including aiding in digestion, weight loss, improved heart health, reduced risk of esophageal, stomach, ovarian cancers, maintaining skin elasticity, and decreasing the duration of the common cold.

So go ahead and sink your teeth into a juicy tangerine — or even better, a lime popsicle. Truth be told there are way too many options out there, so you better start at it and try them all.

Home Expert (Bot)
Hello, how are you? Ask me anything about interior design, home improvement, home decor, real estate, gardening and furniture.
82 shares