Discover the many different types of Celosia flowers that not only contribute to a stunning garden and natural landscape but also grown as vegetables and used as ingredient in many cuisines around the world. 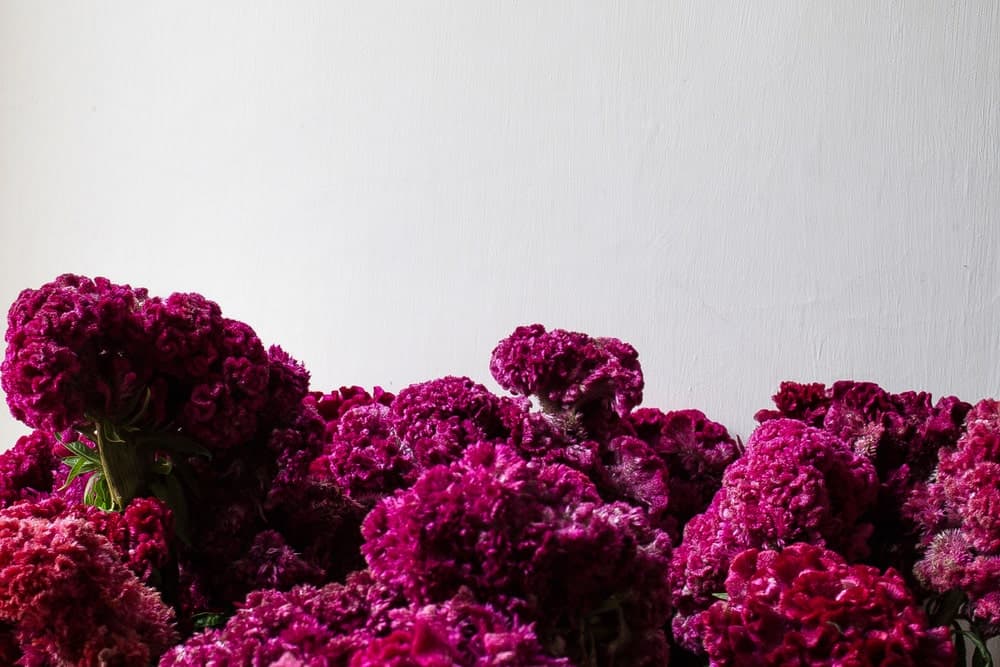 Celosia flowers are ornamental plants that come from the Amaranth family called Amaranthaceae. They are edible plants that are also commonly known as wool flowers. If they have crested flower heads, then they are also known as cockscombs. The plant is found in East Africa’s highlands where they are called ‘mfungu’ in Swahili. The generic name Celosia was derived from κήλεος (kḗleos) –an Ancient Greek word which means burning. This name comes from the flowers heads of these plants which look like a bunch of flames.

The plant grows annually and their seed production rates are very high. One ounce of seed can actually contain up to 43,000 seeds and they produce 200-700 kg per hectare. The seeds are so small that just 1-1.2 grams can contain up to 1,000 seeds! The flower also blossoms for a long time; they can last up to 8 to 10 weeks, depending on the fertility of the soil and the location.

They are also a popular ingredient for food in many places and grown as vegetables in many places such as Southeast Asia, South America, West Indies, and tropical Africa. Their leaves, young inflorescences, and young stems are often used to make stew in different countries. The leaves have a mildly spinach-like taste and a soft texture. They are often combined with garlic, fresh lime, hot pepper, and red palm oil. They are also served as a side dish with other dishes. 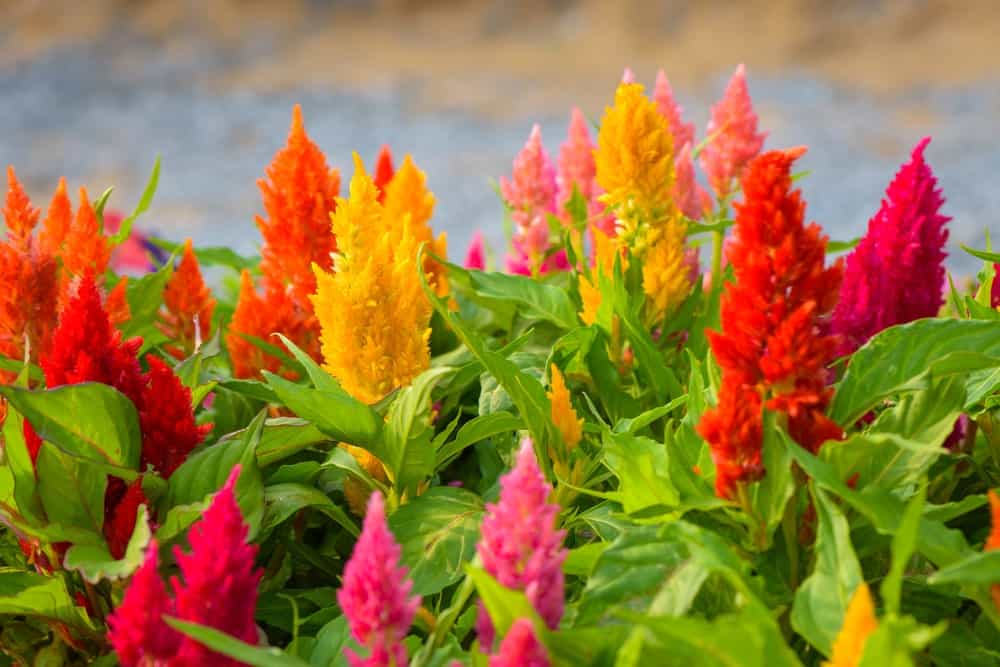 The Celosia Argentea is commonly known as the silver’s cockscomb or plumed cockscomb. It is an herbaceous plant that is often found in tropical areas. The bright colors of the flowers make it a really popular flower for ornamental purposes. In some place of Asia such as China and India, it is considered a troublesome weed.

The Celosia plant grows annually in many gardens all over the world. The blooming period for the flower is mid-spring to summer when you can cut flowers to give to your loved ones. The flower propagates through extremely small seeds. The flowers are hermaphrodites, making them perfect for mass production and harvesting.

The Argentea plants grow in tropical areas in full sunlight. The soil needs to be well-drained. If you take care of the plants well, the flower heads can last up to 8-10 weeks. If you want to continue growing the plants for next season, all you need to is remove the dead flowers.

The Celosia Argentea has a cultivar called Flamingo Feathers that can grow to a height of 2 feet. They come in bright colors like light violet to pink. The leaves of the plant are a dark green and have two main celosia types: century cultivators and Kimono cultivators. 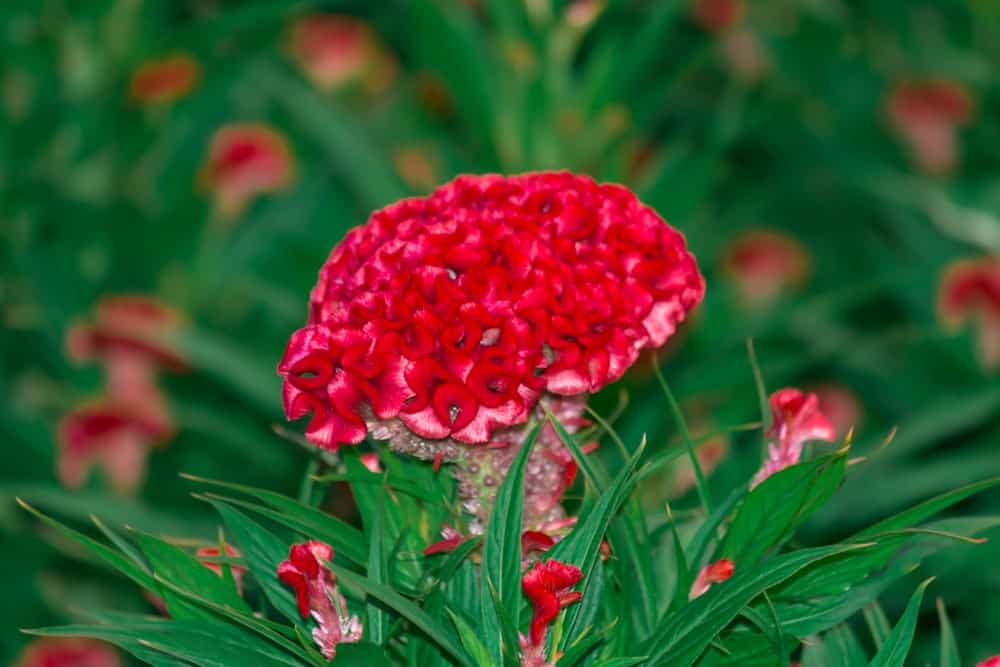 The Crested Cockscomb flower is a common name for Celosia Cristata. The name comes from the red crown on the head of roosters, which resembles the flower head of the plant. It was originally only found in India and almost faced near extinction. It was saved after Burmese, Chinese, and Indian gardeners began to plant it near temples due to the religious significance it had in the region. The Cristata is an actoploid variant of the Argentea plant and grows all over the world in tropics and subtropics. The tetraploid variety of the plant is found in southern and central India.

The Cristata plants are resistant to most diseases and are pretty hardy plants. They grow well in full sun with no shade at all and well-drained soils. The Crested Celosia plant is mostly grown for ornamental purposes since it flowers spectacularly. The flower colors are incredible looking, usually in pink, orange, red, and yellow. They have inflorescences in the form of wavy crests. They feel velvety to touch and blossom for around 8 weeks. The plants can grow up to a foot in height or smaller.

The leaves, stems, and the flower itself are also used as vegetables in Western Africa, South America, and India. They are grown on small farms and gardens in Southern Nigeria, Congo, Indonesia, and Benin. They are known to drive out silver fire-pot drives weeds and root parasites like the Striga which comes

onto essential plantations like sorghum or cereal. In Korea, they are also used as a garnish for rice cakes and desserts, as well as for flower-infused alcoholic beverages. 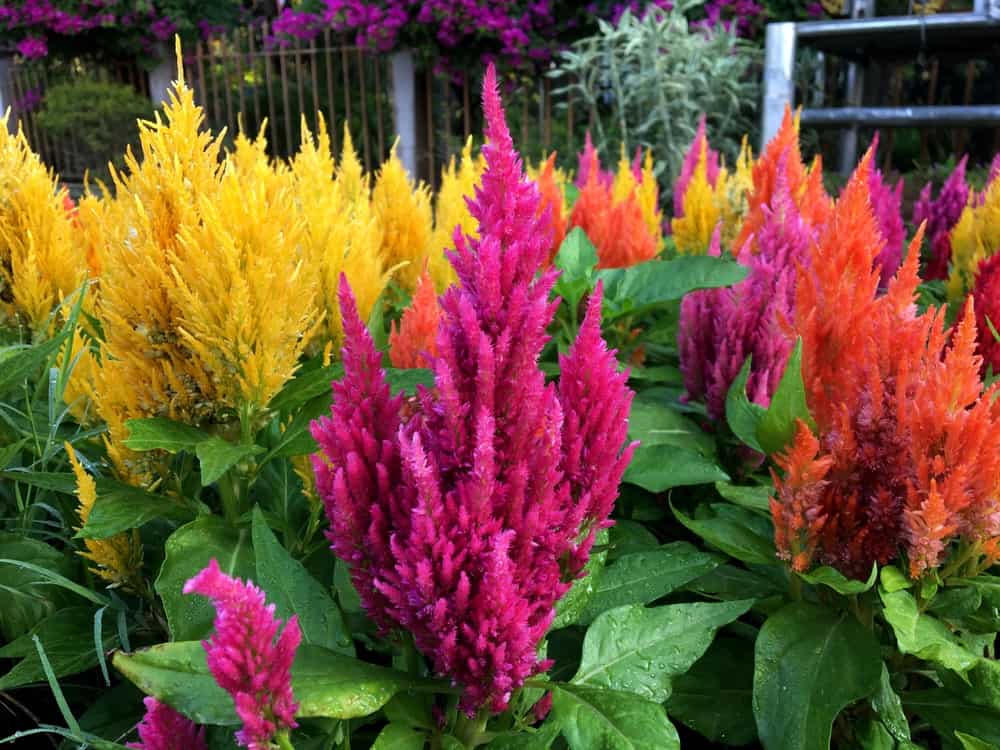 The Celosia Plumosa has bright, big blooms that are really popular for ornamental purposes. The blooming season of the plant lasts from spring through fall. The plant is a tender perennial and only lasts for one season. You will have to replant the plant if you want to see the same flowers again next spring. It is mostly grown in areas where the winter is cold.

It comes in many vivid colors such as pink, orange, yellow, and red. There are many celosia varieties for this type to choose from such as the Fresh Look red flower that has feathery plumes. The Plumosa flower grows in containers, flower beds, and indoors. It is a low-maintenance plant with soft leaves and foliage. The brightly colored plumes look really great when they are grouped together in bouquets or containers.

They grow up to 15-60 cm (6 inches to 2 ft), which makes them perfect as indoor plants. They prefer full sun but you can also cultivate them in bright light. The plant is perfect for sunrooms or windowsills. The soil needs to be well-drained but moist to prevent fungus or dead leaves. The plant also prefers high humidity of around 40%.

The plants are often cultivated since they grow really easily and don’t face many pests. They can get mites though, which are known to feed on the plants. The plants are also susceptible to root strangulation, root rot, and leaf spotting, which need to be treated if you want them to grow properly. It is also important to avoid damp soil and need to be weeded properly. The flowers and leaves shouldn’t be watered as well to prevent fungal diseases.

The plumed Celosia has a fresh look that many people love to see in their garden beds or windowsills. 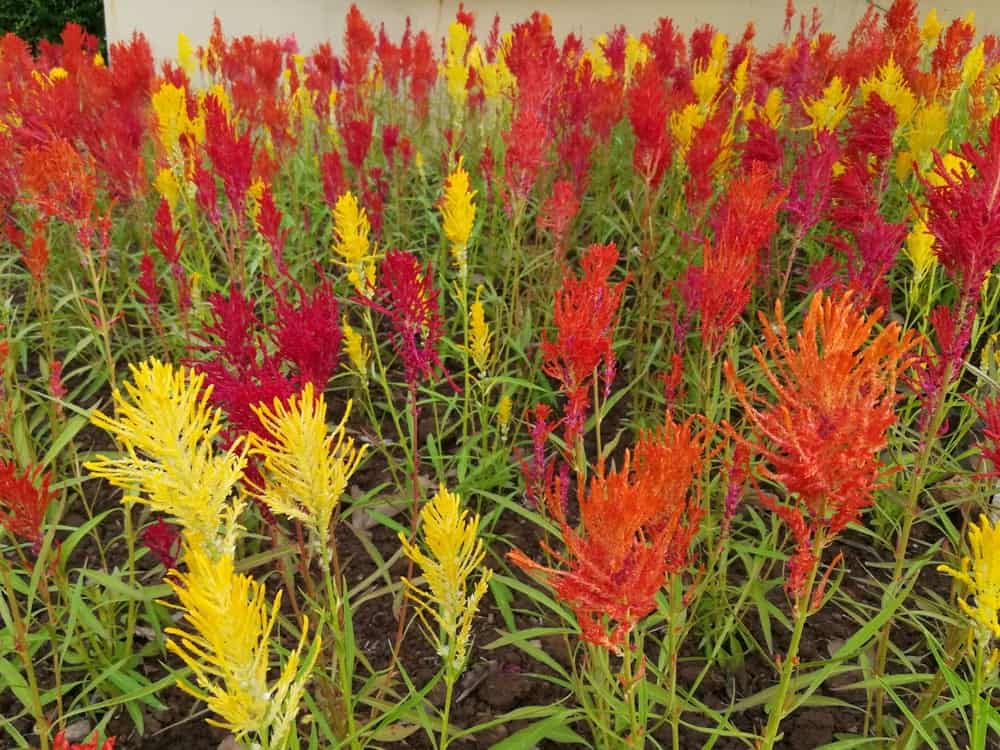 The Spicata is also known as the Wheat Celosia. It is known for the distinctive flower spikes that resemble wheat sheaves, which inspired its name. It is an edible and ornamental perennial plant that is native to North America, South America, and northern Africa. The plant has annual flowers that are usually grown in hardiness zones 9 to 11.

The flower has several strong stems which result in a bushy, open plant branching in every direction. The upright flower is 2-3 feet tall and has medium to dark green leaves. The leaves also have unique burgundy tinges, which looks really cool against the vibrant flower colors. The cylindrical inflorescences of the plant can be red, purple, pink or even bi-colored.

The plant grows as small flowers packed together in hundreds. By the time the last frost arrives, the flower spikes are several inches long. The flowers are often sturdy enough to last through winter and continue to blossom through late fall.

The plant is also considered as a leaf vegetable in East and Southeast Asia, as well as tropical Africa. The plant is popular as a food due to its spinach-like taste and soft texture. The flowers are often visited by butterflies, wasps, bees, and even hummingbirds for their nectar.

They are grown in full sun and thrive in well-drained but moist soils. The Spitica can grow really tall in some cases and may need staking in windy regions. The Celosia plant can only be propagated by seed and can take 2-3 weeks to germinate. There are many hybrids and cultivators of the plant including:

The Celosia Floribunda comes from a small tree or shrub. It is found in the Baja California Sur area. The plant reaches a maximum height of 13 ft or 4 m which is pretty tall for its species. The species was discovered by John Xantus.

The Celosia has grey-ish to green striated branches that contrast the inflorescences in the best way. The leaves come in different sizes from 0.5cm to 11cm. They are oval in shape with pointed edges. The sepals of the flower grow to be 2mm long and are straw to paper white colors. 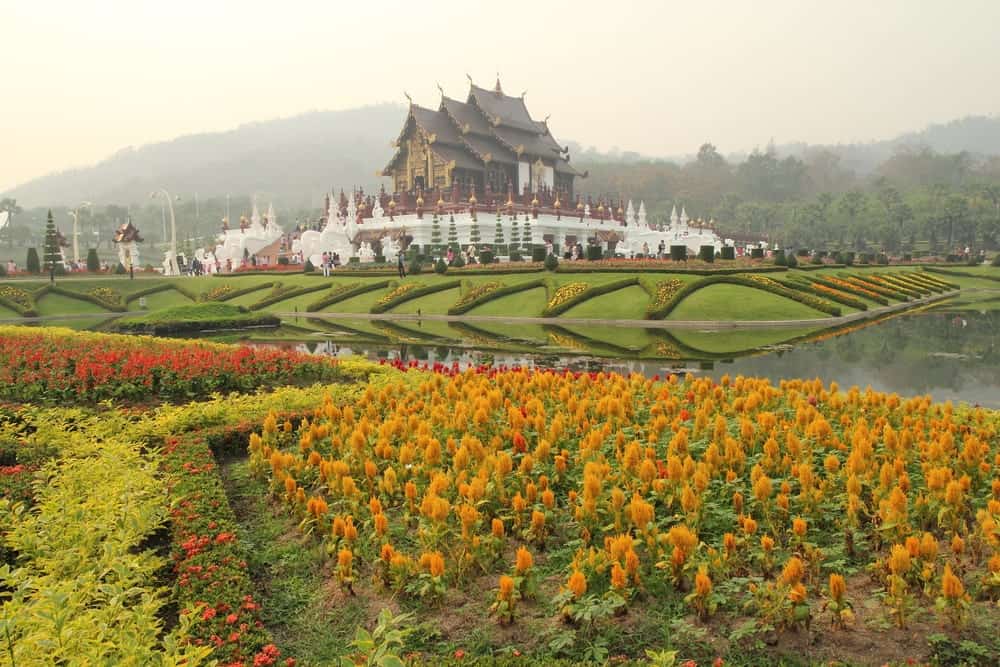 The Celosia Texana is also commonly known as the West Indian cock’s comb in many regions. It is found in Texas and Florida and is a perennial plant. It is currently listed as an endangered species and work is being done to cultivate the plant in Central and South America. The plant can even grow up to 2m or 6 feet in height. The flowers last all the way from fall to winter.

The Celosia Trigyna is commonly known as wool flowers due to its distinctive flowers. The flowers can go up to 3 feet or 1 meter in height. In many regions, it is even considered as a weed and killed off. The plant is grown from seeds and is cultivated as a source of good during droughts. The hardy plant can fight off drought and when it is fully grown, the leaves are boiled like cabbage. It is eaten like a vegetable in Africa and has a slightly bitter taste which is why it is often mixed in with other food to disguise the taste.

It is commonly known as silver spinach as well due to the silver tinge on its branches. The leaves have a crescent shape and resemble stipules. The plant grows in places like woodlands, grass lands, and rocky grounds. It can also be semi-aquatic and occurs along water channels. It can grow in altitude ranges till 2000m after which the cold can kill the plant. It flowers from March to July.

Out of all the different types of Celosia plants, the Celosia Virgata is one of the rarest ones. It is a perennial plant that grows in sub-shrubs as an herb or forb. The plant is also known as albahaca in some regions. It is found in Caribbean regions like the Virgin Islands and Puerto Rico. The stem of the plant can grow a few inches tall and grows like a weed. The flower forms spikes, which look really nice against the green of the leaves.

The Celosia Isertii has many different names all over the world.

It is used to make condiments, spices, sauces, and flavorings in cuisines around the world. The plant is also prepared as a soup where the leaves are boiled. It also has medicinal properties that treat arthritis and rheumatism.

It is a straggling herb, which grows in a bush form to 3 meters tall. The base of the plant is sometimes woody and grows in habitats such as damp sites, clearings, stream banks, forests, and savanna. It is found in regions like Cameroun, Southern Nigeria, Senegal, Zambia, Angola, and Tanganyika.

The Celosia flower is important as an ornamental plant and a food ingredient in many regions of the world. Its colors are known to be pleasing to the eye and many people love to include them in their bouquets.