Celery is not just celery. There are 13 different types of celery. Who knew, right? We list them out with photos as well as sub-types in this ultimate celery guide. 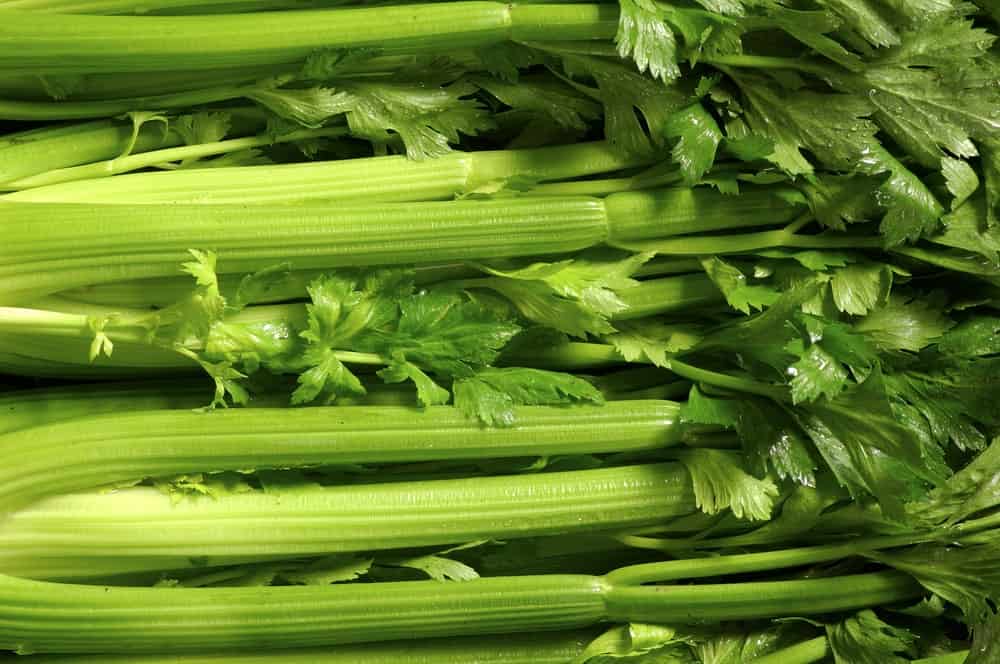 Originally hailed from the Mediterranean basin, celery was primarily known for its medicinal purposes, which is the reason why ancient people preferred to cultivate it the most. Due to its powerful oil and curable seeds, celery was the number one choice of ancient doctors and health specialists for treating ailments such as the flu, cold, and indigestion. In addition to using it as a cure for harmful illnesses, celery was also used as a flavoring herb and horse food.

As more and more people realized the health benefits of celery, the popularity of a simple green plant started to spread at a lightning speed. Archeologists have found the celery remains in the ancient Egyptian tombs as it is believed that the Egyptians considered celery a holy plant. Women even used celery for accessorizing as they used to wear celery-made necklaces at their Nemean Games.

It wasn’t until the 1600s, that celery was started being seen as an edible plant in France. Italians began using it much the same way as we all do in modern times. However, Italians found the taste of celery quite strong and bitter. To de-intensify its flavor, they found a way to do it through blanching. This led to the birth of different types of celery (discussed later).

George Taylor – an ironmaster – brought celery seeds to Kalamazoo, Michigan in the 1850s. He cultivated the seeds in one of his nearby farms. At the Burdick House, where a ball party was taking place, Taylor offered the seeds to the attendees for free. This piqued interest in people about celery, and in no time, the production of celery was at its peak.

Due to this, Kalamazoo, at that time, became the “Celery Capital”. Unfortunately, when a terrible blight hit the nation in the 1930s, the production of celery drastically decreased. Currently, California is considered to be the largest grower of celery, harvesting about 23,500 acres per year.

Celery is a highly beneficial vegetable that comes in various types. Continue reading this blog post to know exactly how many kinds of celery are there and what are their features and benefits.

Related: What Goes with Chili | Parsley Substitutes | Parsley vs. Cilantro 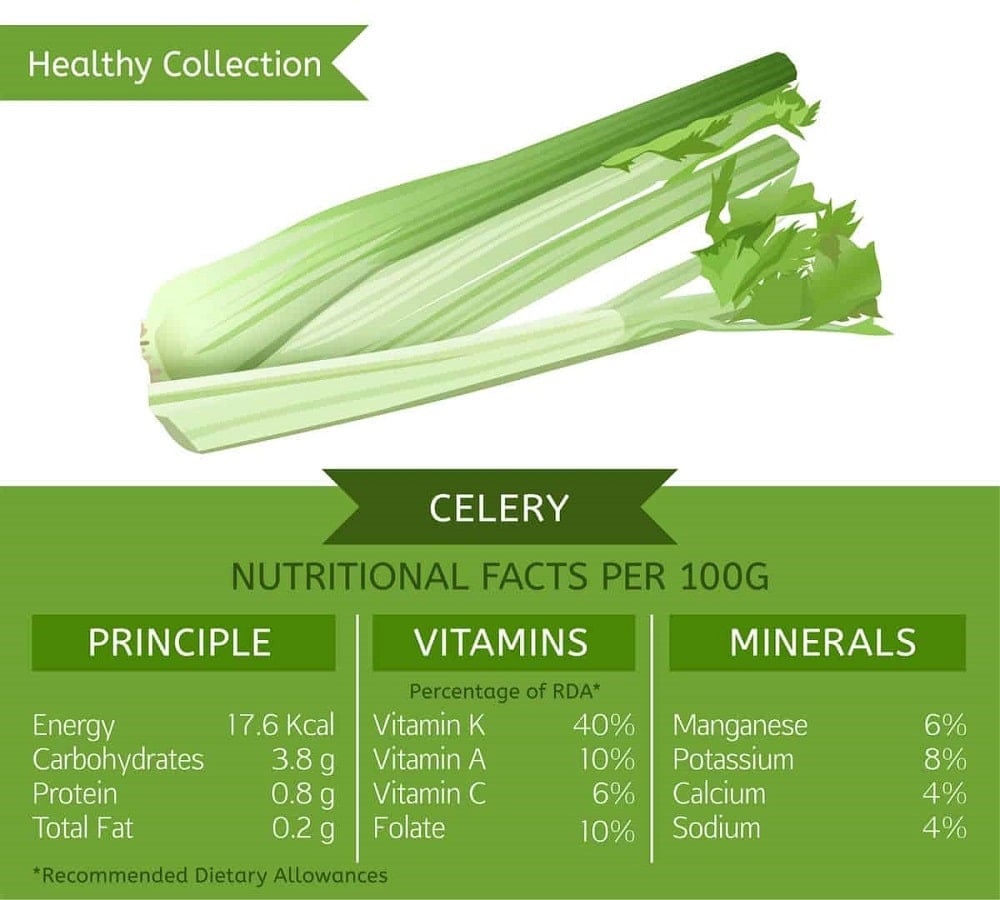 The Different Types of Celery? 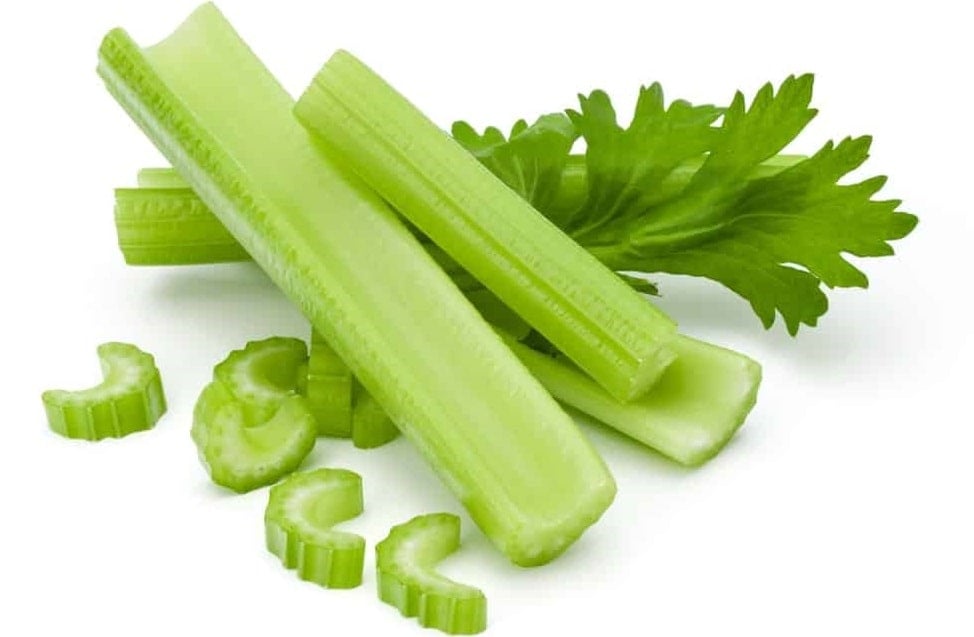 Also known as stalk celery, Pascal celery happens to be the most common and popular type of celery in the United States. It is the kind of celery that can’t be grown in all kinds of regions, especially in a hot, warm climate.

They are ideally cultivated in cool climatic conditions such as in USDA, zones 2-10. It takes almost 2 to 3 months for the stalks of Pascal celery to mature.

Do you want to grow your own Pascal celery? Then remember that the ideal time for Pascal celery to grow is during the fall season. As the cool and chilly weather falls upon, soak the seeds overnight. This will help speed up the germination process. Then sow the seeds in a flat row at least 1 inch apart.

Make sure that the soil is moist, away from the direction of sunlight. Germination usually takes two to three weeks so you will have to wait that long. When the plant grows 2 inches tall, transfer it into a pot. Place it out in your garden as it reaches a height of 6 inches. Make sure that the soil level is the same in the pot as it was before and the plant is kept below 75 degrees F or 23 degrees C temperature.

For a successful harvest, ensure that you thoroughly take care of the Pascal celery, as this type of plant needs constant care. Some of the crucial tips that you will need to keep in mind are as follows:

At the time of harvest, Pascal celery should be about 3 inches in diameter. When this happens, gently cut off the plant from the soil level. Then, you can cut the outer stalks of the vegetable when they are 12 inches tall. You can also store the celery leaves and later use it as flavoring herbs or in salads.

A few fundamental examples of Pascal celery include:

This type of celery is blanched to give its golden-colored stalks a white shade. This is done by keeping the stalks well-buried in the soil or wrapped up tightly to prevent the penetration of the sunlight. You can harvest this kind of celery when it reaches a height of 18 to 23 inches. The entire procedure usually takes up to three to four months from the sow-time.

This is another type of Pascal celery that comes in a dark green variety. It matures well in Southern Europe as the final result is fresh and beautiful.

If there is the most reliable variety of celery, it is Tall Utah. With dark green stalks, Tall Utah celery is quite fresh, aromatic, and delightful once it gets mature.

You will need to sow seeds in the warmer season so that the celery can be harvested in the fall season.

Invest in conquistador and you will get to enjoy the pleasantly crisp and clean flavor of celery. To ensure that it grows well, add compost or a fertilizer daily and keep the planting area super moist. 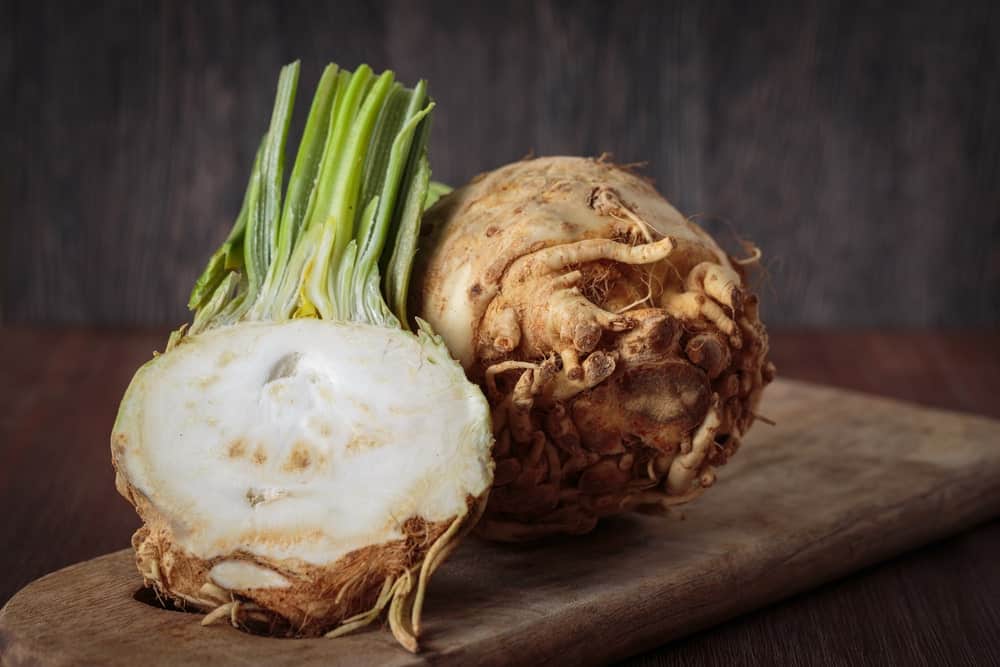 Also known as turnip-rooted celery, knob celery, and celery root, celeriac is similar to a root vegetable except it comes with edible bulbous hypocotyl. Many mistake it for being the family member of a turnip. However, that’s not the case. Instead, the vegetable is one of the many varieties of celery planted for the sole purpose to utilize its roots – hypocotyl. In the United States, celeriac is commonly known as celery root, having a distinct flavor.

Once cultivated, celeriac, from having short roots eventually starts to form a firm, round flesh. The green-colored celeriac is estimated to be 10 to 15 cm in diameter. How can one tell if celeriac is ready to harvest? It is when the flesh is creamy green and white in color and slightly rigid in its texture.

It’s not necessary to wait for the vegetable to mature. A current trend, being followed in Peru and South America, is to eat the vegetable when undone. Even when raw, the vegetable is packed with flavor and tenderness. The versatile vegetable can be prepared in a variety of ways. Some people prefer to either roast it or stew it or mash it and then consume the flavorsome celery.

You may also come across sliced celeriac in a wide range of dishes, lending them a unique flavor. Some of these dishes include soups, salad, casserole, pasta, rolls, and patties. But that’s not it. The stems and leaves of the vegetable are quite vibrant and appealing which is why they can also be used for garnishing in various dishes.

While preparing celeriac, peel the outer layer of the vegetable and cut it into thin slices. Avoid using the stalk as it is bitter in taste. Keep in mind that celeriac loses its color quite easily. So once you chop the celeriac, soak it in a bowl of water, squeeze in some lemon juice or add a drop or two of white wine vinegar.

Celeriac can be stored in a refrigerator to be used later. Put it in a vegetable drawer in an airtight container so that no air enters the box. Otherwise, the air can easily rot the vegetable away. The nutritional profile of celeriac is quite high as research suggests that it is an excellent source of vitamin K, vitamin C, potassium, and dietary fiber.

Some of the fundamental types of celeriac are:

This is the most popular variety of celeriac, having a round shape, average size, and a strong flavor. Traditionally, it is well-preserved in winters.

The celeriac type comes in white color and maintains its original color once it is cooked. It is easy and quick to grow than the rest of the varieties.

Although it takes time to mature, the end product is twice the size of the normal kinds of celeriac. 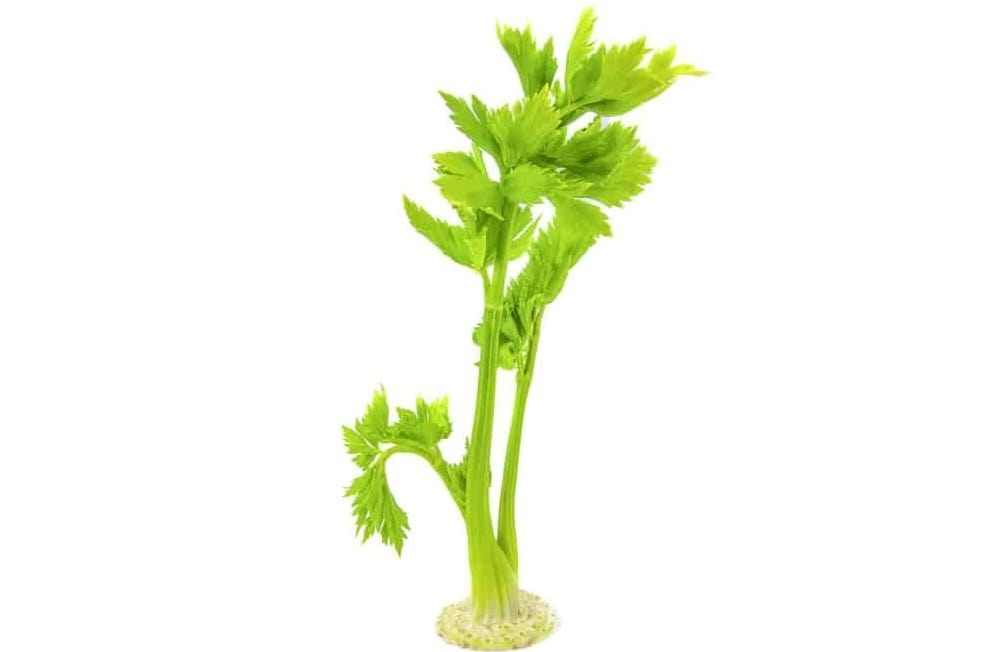 This kind of celery is primarily cultivated for its leaves as they are used as herbs in Chinese and European cuisines. The only place you can get your hands on this refreshing celery is in the Asian shops and farmers’ markets in the United States.

People often confuse leaf celery with wild celery due to their striking resemblance. However, leaf celery, also known as cutting celery or Chinese celery, consists of rich, aromatic flavors. Unlike the other two varieties of celery, leaf celery cannot be eaten raw.

If you want to kick the flavor of your food up a notch, add a few freshly cut pieces of leaf celery and you are good to go. Some of the dishes in which leaf celery is added in abundance are stews and soup. In addition to its leaves, the stalks of leaf celery are equally used in food items. You can chop its stalk into smaller pieces and add them to rice, pasta, or broth.

Leaf celery is available in the following varieties:

Make the most of the flavor of celery by purchasing Safir leaf celery without having to deal with large, thick stalks.

This is another type of leaf celery which is ideally cultivated in temperate, tropical regions and produces stunning dark green leaf celery.

Are you looking for easy-to-grow celery? Go for this 18th-century Dutch heirloom which is curly in shape and tasty in flavor.

All these types of celery can easily be shopped from any reputable vegetable shop/market. Buy them today and take your everyday meal a notch higher with the addition of this organic produce. 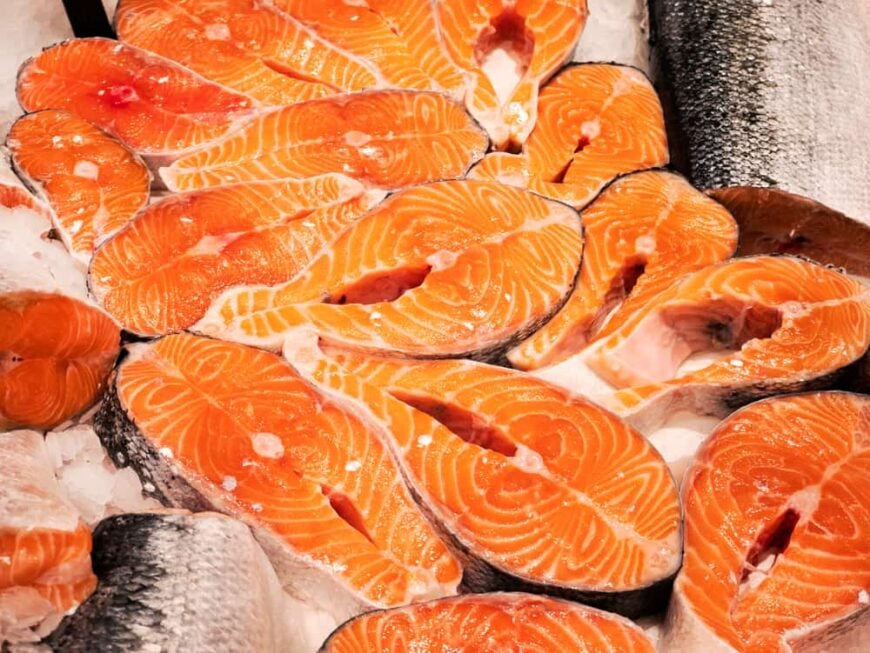 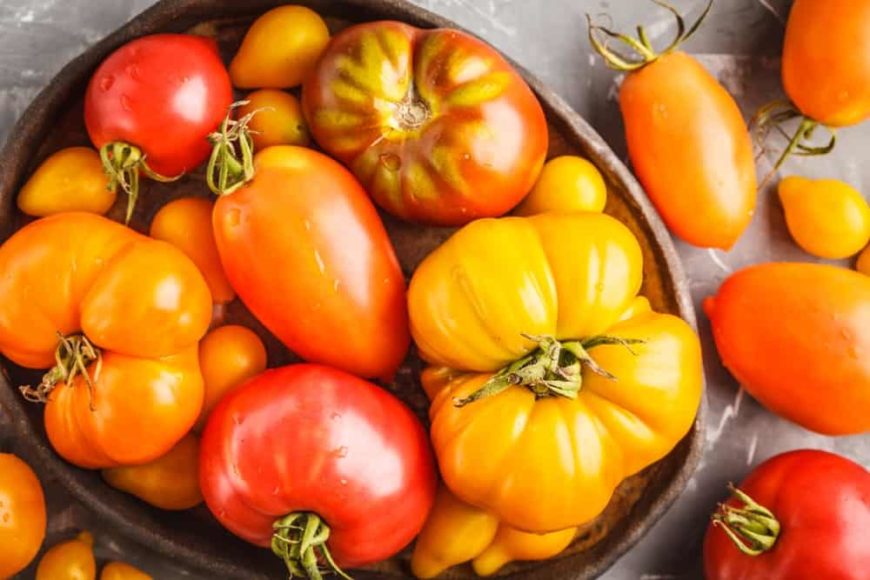 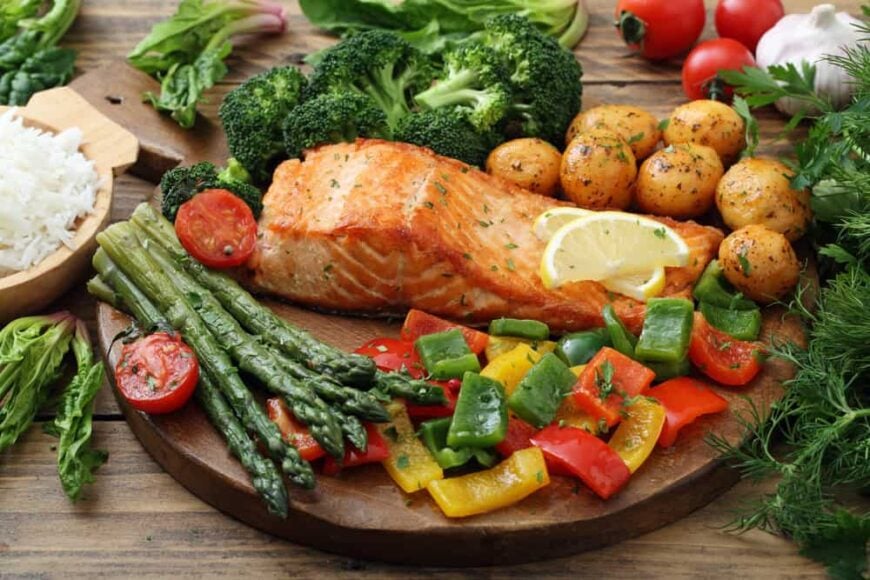 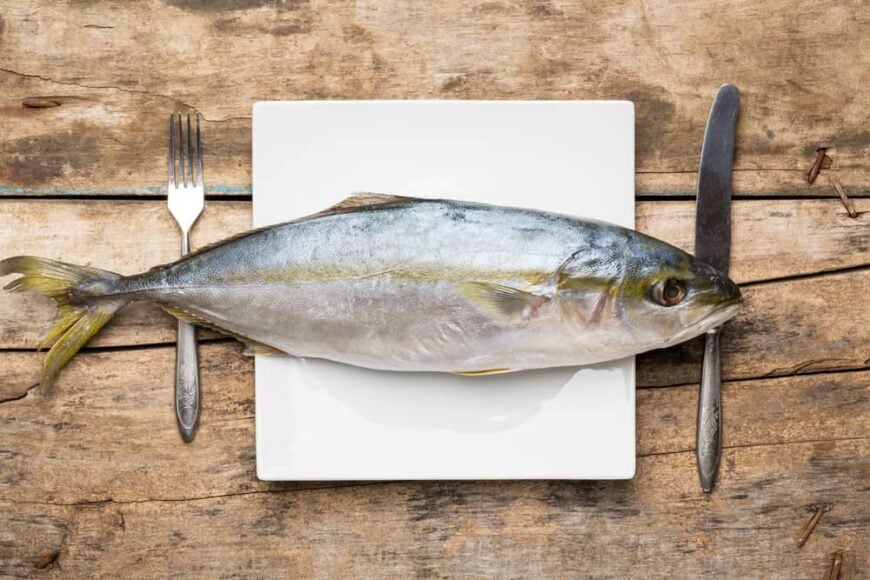