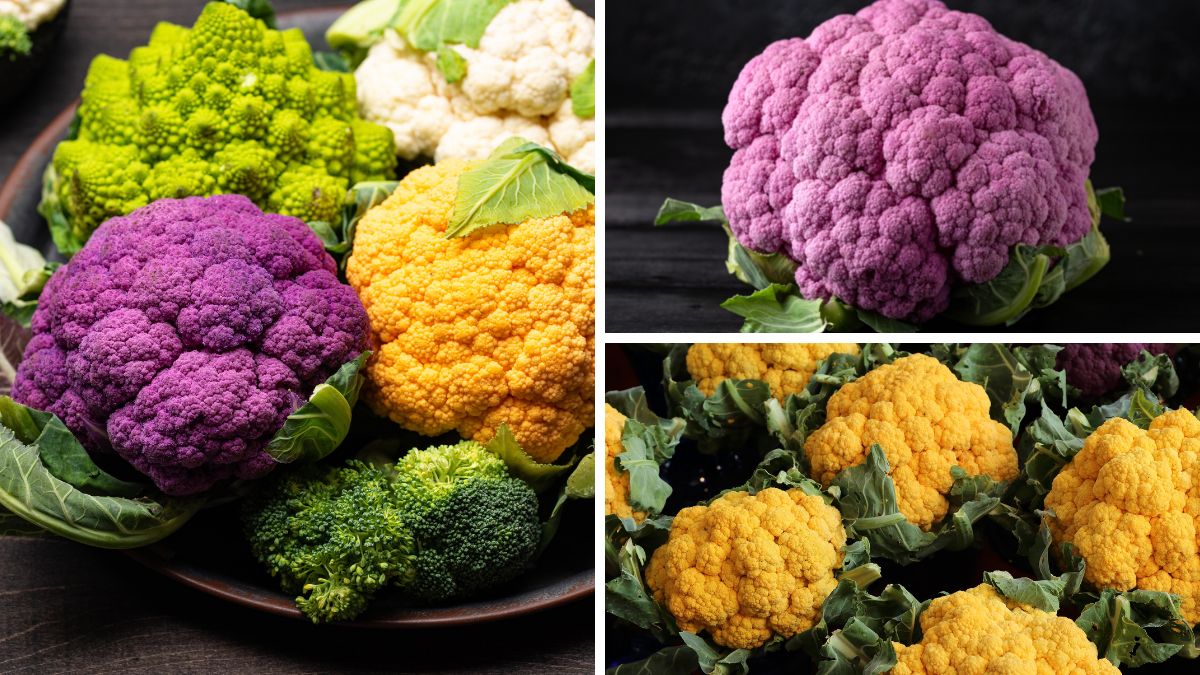 The cauliflower is an annual plant that belongs to the cruciferous vegetables or the cabbage family. It originated in Asia Minor and was first cultivated in 600 years B.C. in Turkey. It became popular in Europe in the 16th-century but was only cultivated in America at the beginning of the 20th century.

There are hundreds of varieties of cauliflowers that differ in color, size, shape, taste, and nutritional composition. Aside from white, cauliflowers also exist in other colors such as green, purple, orange, brown, and yellow. 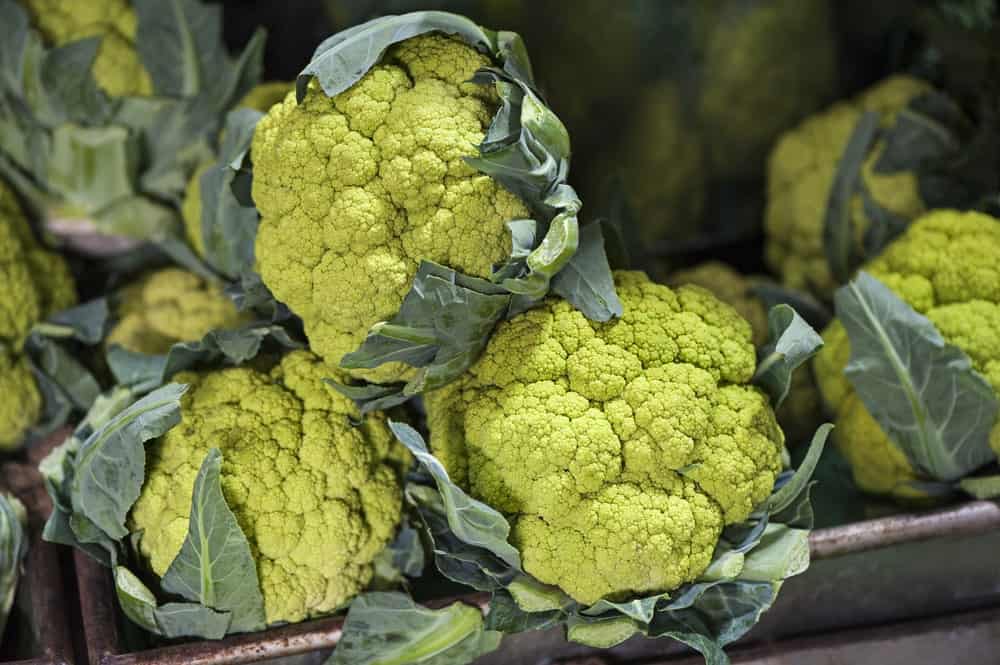 One variety of green cauliflower is called the Romanesco, and it is lime green with pointed pinnacles at the surface of the head. They are small heads, a tad smaller than many other types of cauliflower, and the plant itself tends to be less vigorous than other varieties.

The Romanesco has a mild nutty taste, very similar to broccoli, and it makes a very attractive dinner plate. Green cauliflower is also called broccoflower, and it is available in numerous varieties.

Since the early 1990s, these types of cauliflower have been available commercially throughout Europe and the United States, and other known varieties include the Vorda, the Alverda, and the Green Goddess. Varieties of Romanesco include the Veronica and the Minaret. 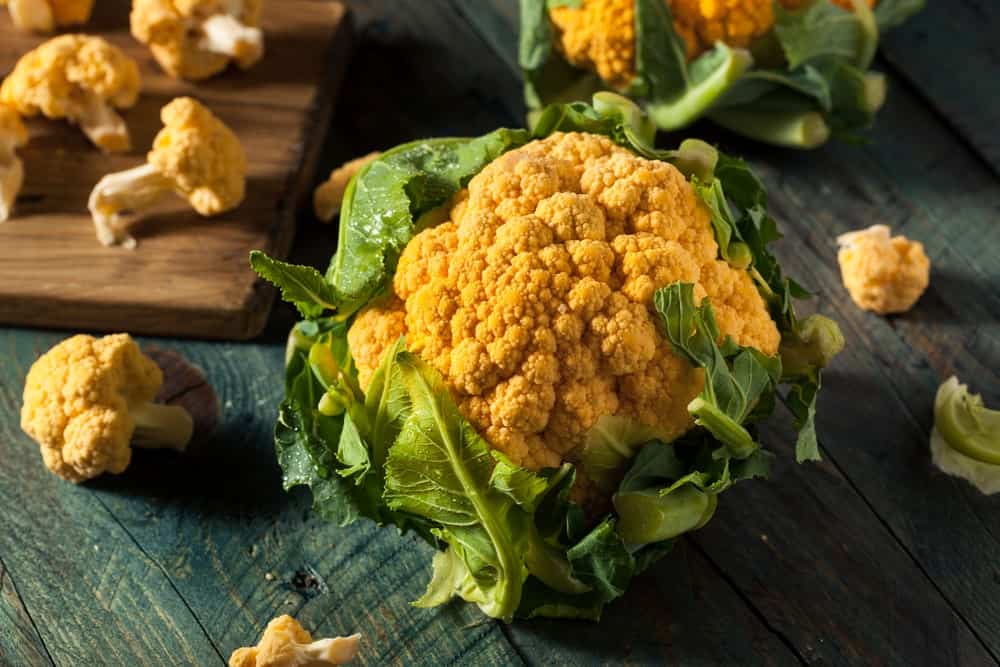 Also known as the Cheddar cauliflower, this is a hybridized variety that develops curds that are bright orange in color. They contain more of the orange pigment known as beta-carotene – which is a precursor to Vitamin A – and they hold well on the plant because they are sturdy, even when they don’t produce flowers at harvest time.

In fact, when you cook this type of cauliflower the color gets even brighter and deeper in color, and because of their durability, you can harvest the plants at various times instead of all at once and still enjoy their flavor and texture. The Orange Bouquet is another variety of orange cauliflower. 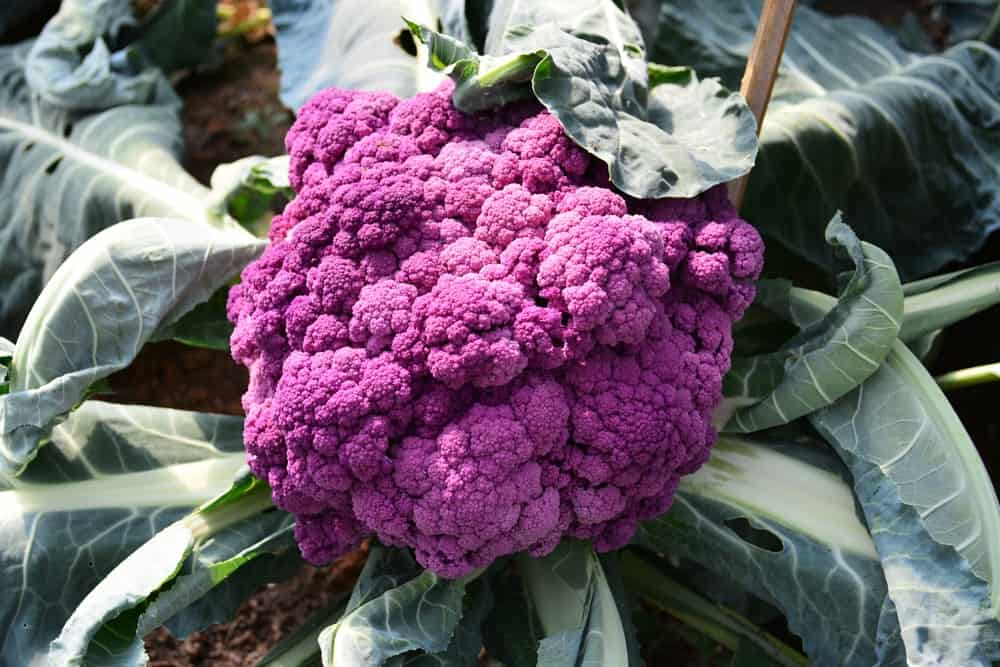 Chock full of vitamins and minerals just like other types of cauliflower, the purple cauliflower plants are very healthy for you and taste great.

The purple in this type of cauliflower comes from water-soluble pigments that are also found in red wine and cabbage, and purple varieties include the Purple Cape and the Violet Queen, the latter of which has very vivid purple curds and tastes great when eaten raw.

In southern Italy and in Great Britain, there is a type of broccoli that has tiny buds and is called a purple cauliflower, although it doesn’t technically fall under this category. 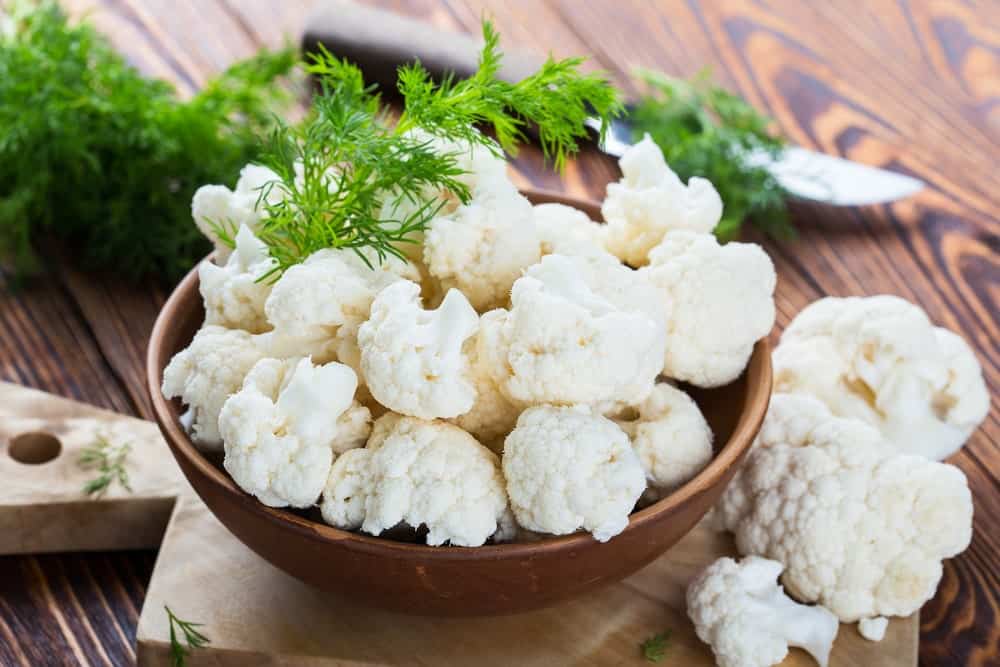 The curd is the edible part of the plant, and the more it grows the larger it grows, eventually being a pure-white color and appearing without the side shoots. Some are tolerant of spring or fall frosts, while others mature very quickly, but white cauliflower is the most common and popular type of cauliflower there is.

The Snowball is another type of white cauliflower introduced to North America in 1888. It is snow-white in color and features a six-inch head that has tightly wound curds on it. It only takes a little over two months to harvest, and it does best in full sun with soil that is slightly acidic.

One of the interesting characteristics of white cauliflower is that it needs to be blanched while it is growing. This means that the curd must be completely enclosed by green outer leaves so that the white color is preserved and it tastes right once it’s harvested.

Origins of the Types of Cauliflower 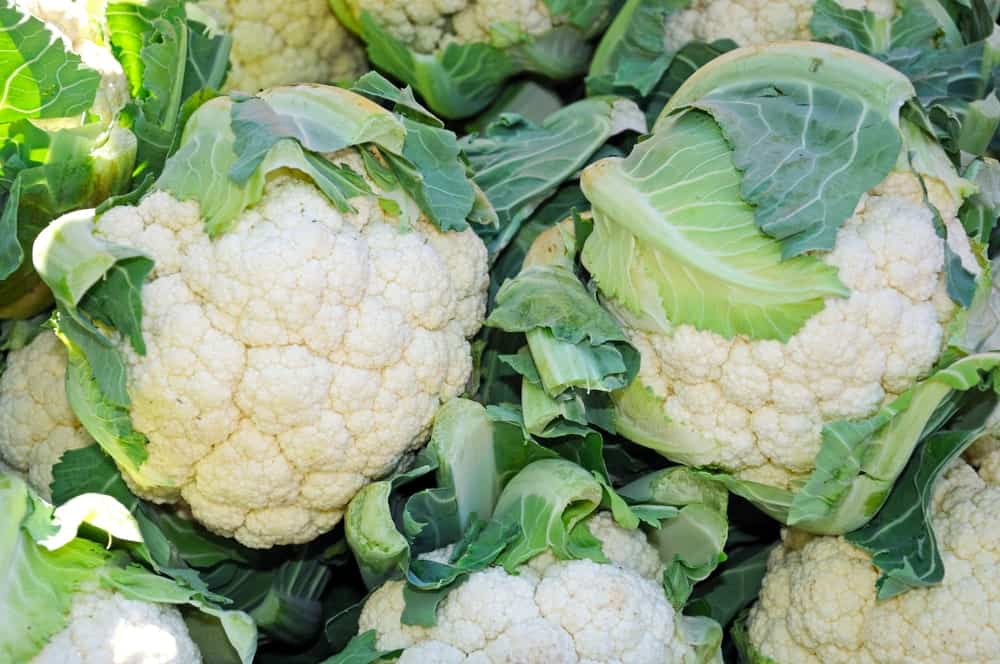 The original cauliflower was developed in Italy, but it was later taken to other parts of Europe, including Germany, France, England, and the Netherlands. Some of the most important types include the Northerns, the Anger, the Roscoff, the Cornish, the Erfurt, and the Snowball.

Most are grown in cold weather, although the Erfurt can be grown during the summer months. Here are some characteristics of these types of cauliflower: 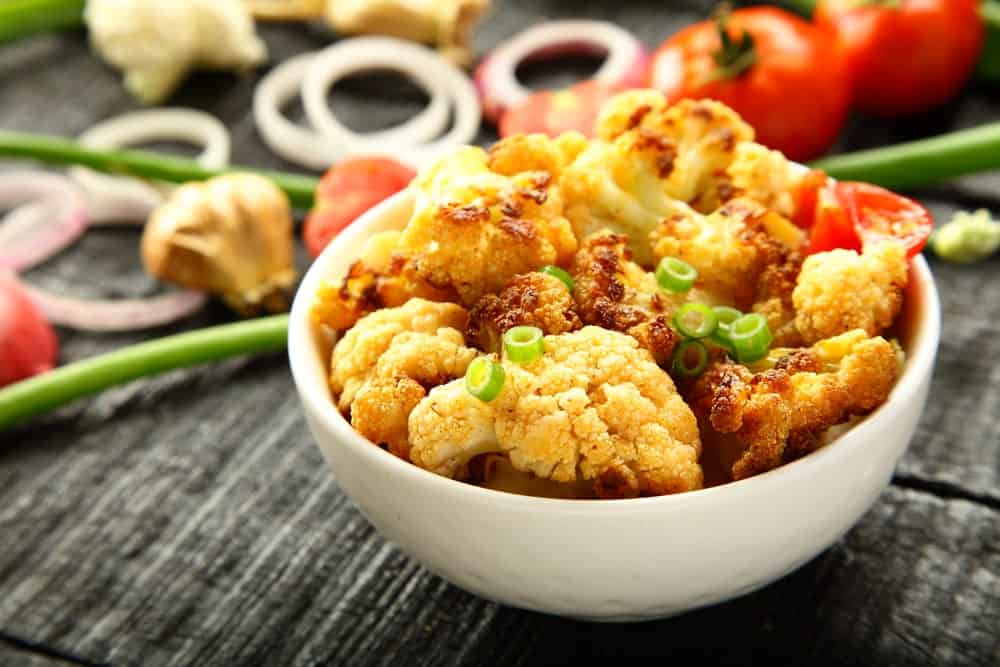 The Health Benefits of Cauliflower 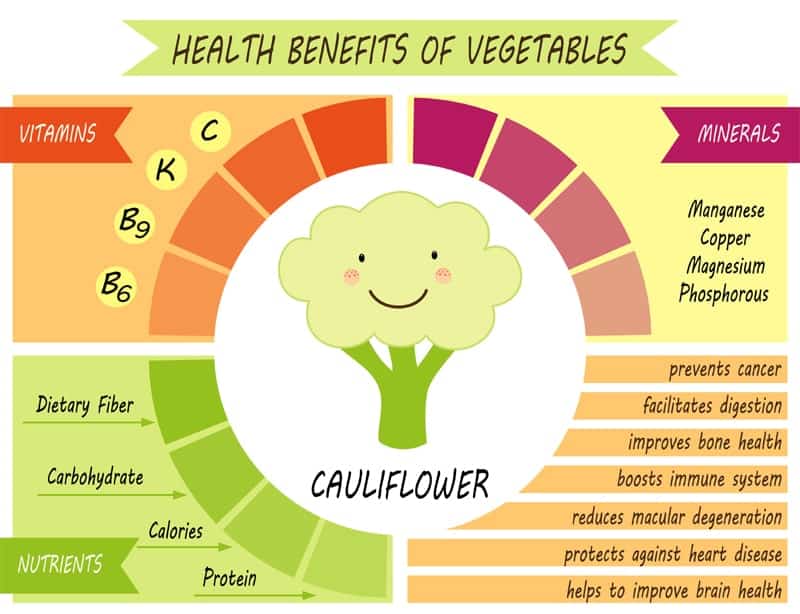 Cauliflower is low in calories and contains the following vitamins and minerals:

In fact, one cup of raw cauliflower is only around 25 calories, and the nutritional benefits are extraordinary. The Vitamin C content alone is enough to meet 77% of the recommended daily intake requirements set by the Food and Drug Administration (FDA).

It also has 10% of your fiber needs, a lot of antioxidants is high in choline, and is a great low-carb alternative to eating grains and legumes.