Learn about the different types of carnivorous plants and the ingenious ways on which they trap their prey and how they gain nourishment to survive. 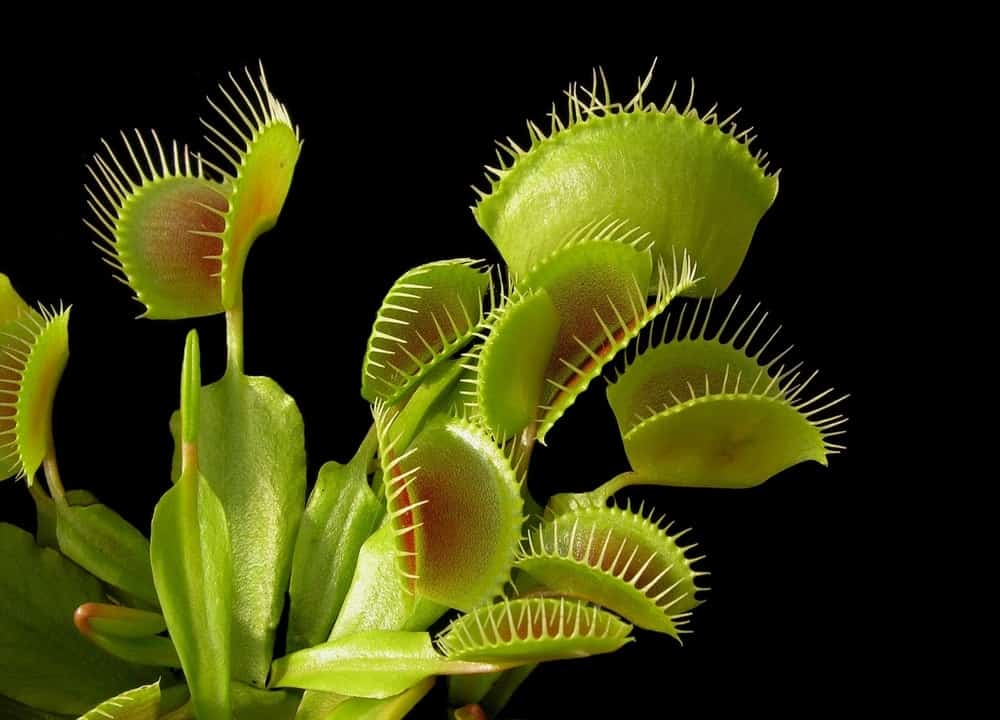 There truly is only one celebrity when it comes to the land of carnivorous plants. Whenever anyone mentions carnivorous plants, the mind immediately thinks of the Venus Fly Trap.  But it does the entire family of plants injustice to ignore the others!

Doing research into the different types of carnivorous plants and how they operate, totally reinvigorates one’s curiosity about nature. It is completely absurd and random at times, and the following plants should be the poster child for nature’s creative insanity.

Today we’re going to look at the different ways in which carnivorous plants digest their prey, with pitfall traps, flypaper traps, snap traps, suction traps, and the lobster pot trap.

What Do You Mean Carnivorous?

Okay, sometimes they are called insectivorous plants seeing as the vast majority of what they digest is insects. However, there are certain types of carnivorous plants whose bladders (literally where they digest) can be large enough to fit a small rodent, sometimes as large as a squirrel.

Carnivorous plants are found in soils that are incredibly low in nutrients. It’s an incredibly bizarre method of adaptation. Because the plants weren’t finding enough nitrogen in the soil, they sought it elsewhere. The vast majority of carnivorous plants don’t intake any nitrogen from the soil whatsoever and strictly access it from their prey alone.

This explains the reasoning behind why many if not all carnivorous plants don’t actually grow from a root system. Many of them are simply free-floating in soil or water. 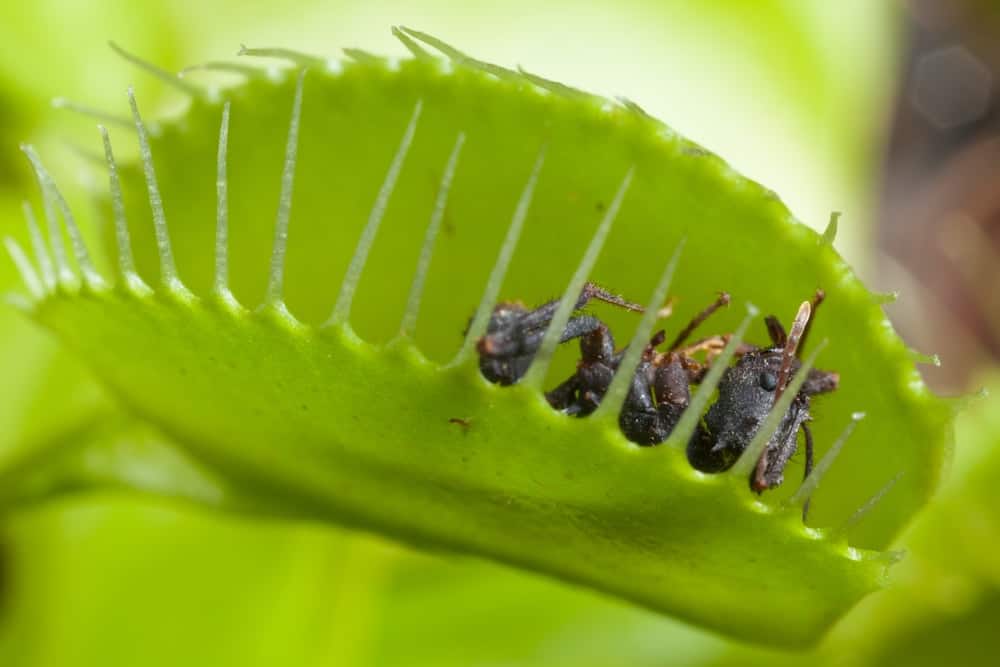 The carnivorous plants will grow without successfully catching prey, but it will grow very quickly and reproduce successfully if it does catch prey. Some capture to facilitate pollination! A certain kind of orchid (noncarnivorous) has a weird nectar-filled hallway with two openings.

An insect will be attracted to the nectar and enter, walk through the hallway and the orchid will drop 2 sticky eggs on the bugs back, which will exit out the other side and drop the orchid eggs nearby.

In order for a plant to be considered carnivorous or insectivorous, they must possess the following three attributes: 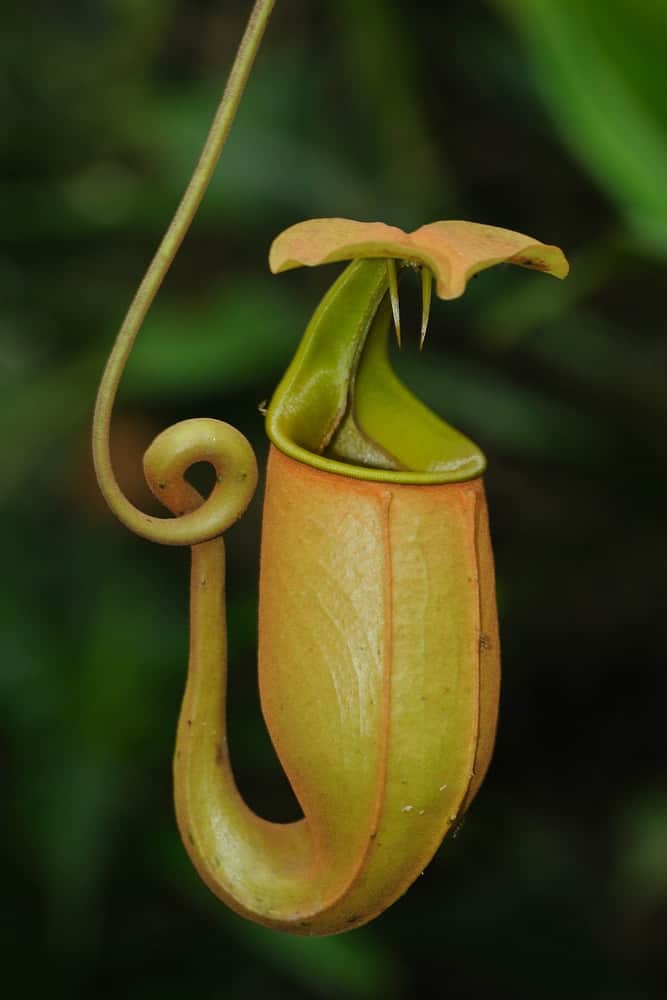 And here’s a fun fact just because: some carnivorous plants don’t actually produce chlorophyll! This means they don’t photosynthesize, which is literally what makes all other plants, plants.

What Do They Eat?

It’s a rather long list, so bear with me. Starting from largest to smallest: 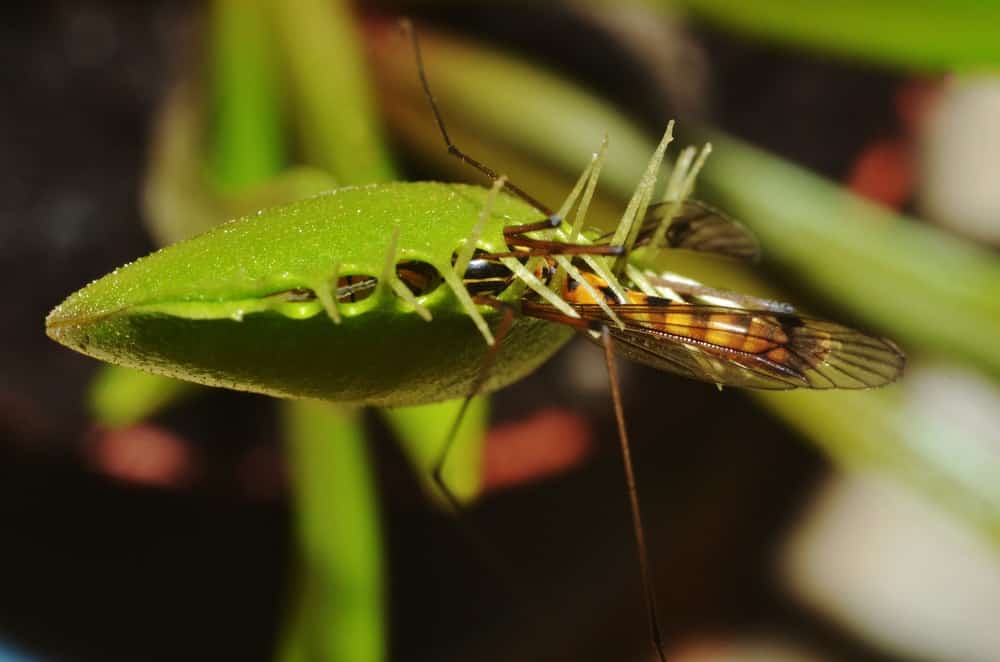 Where Are They Found?

There are some carnivorous plants that are completely abundant and can be found literally anywhere but Antarctica (like the Sundew plant!). There are others that are critically endangered (like the Waterwheel, there are only 50 known to be living right now).

Their common habitat is usually in fens and bogs, and soils that are very very waterlogged. The water or soil itself will always have incredibly low nutrient concentrations but have tons of sunlight. They survive in still, warm, bacteria-infested water and still seem to thrive. 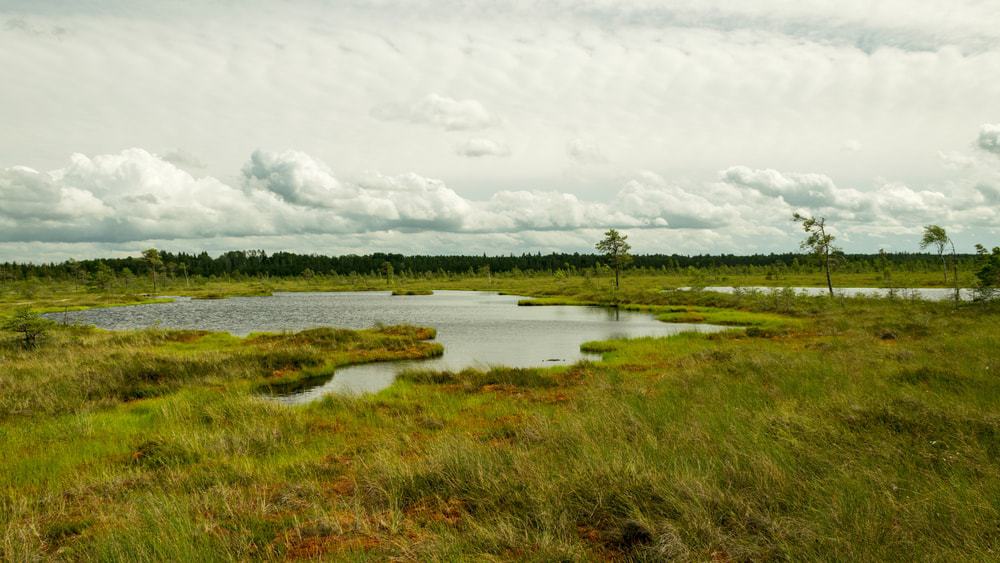 The 5 Styles of Trapping 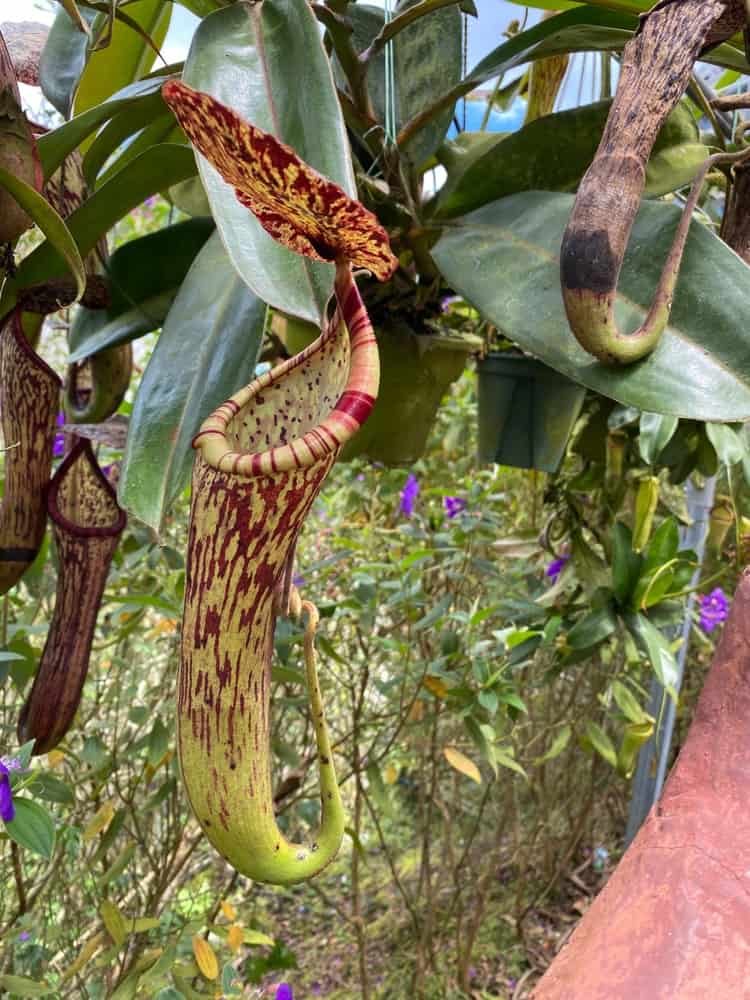 The pitfall trap is reserved for carnivorous plants that have enormous bladders. They are shaped like a pitcher (that’s why they’re categorized as pitcher plants) that is filled with sweet and sticky nectar, filled to the brim with digestive enzymes. The leaf is one pitcher shaped entity with an enticing opening and slippery inner walls, to ensure prey does not escape.

Click here to learn more about the pitfall trap. 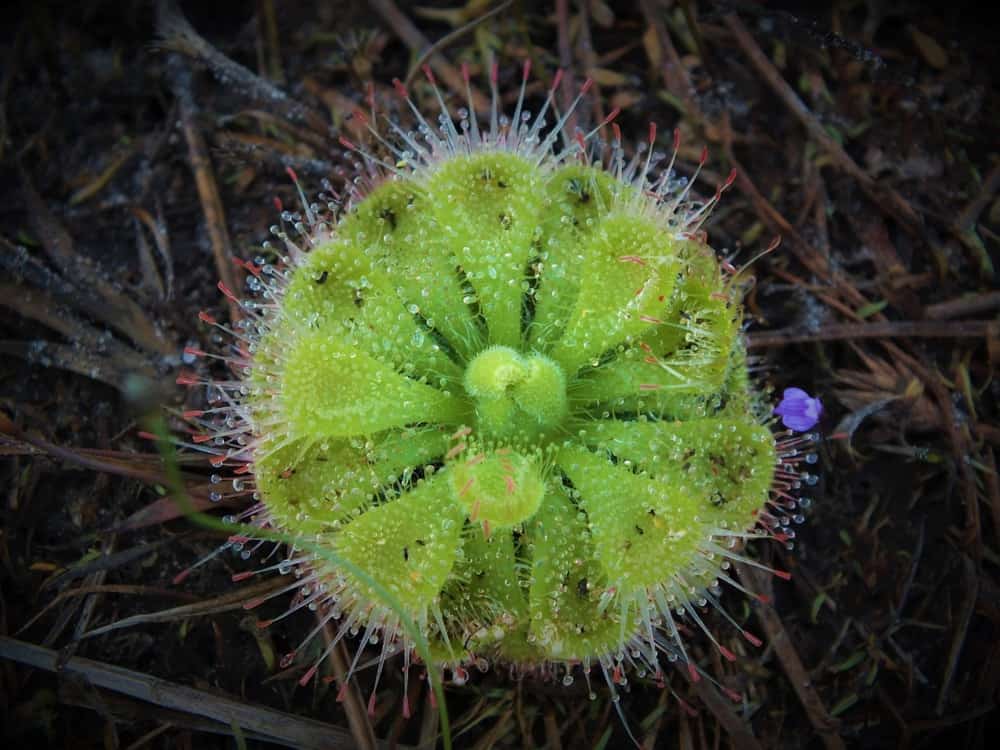 This type of trap is one of the more common methods of trapping prey. The leaves of the carnivorous plants will either be sticky with mucus or feel sticky due to microscope little hairs with tiny hooks on the ends. A rather straightforward mechanism, the insect will become stuck to the plants’ leaf and slowly starve to death and die. The insect will decompose on the leaf and its nutrients absorbed by the plant.

Get to know more about the flypaper trap here. 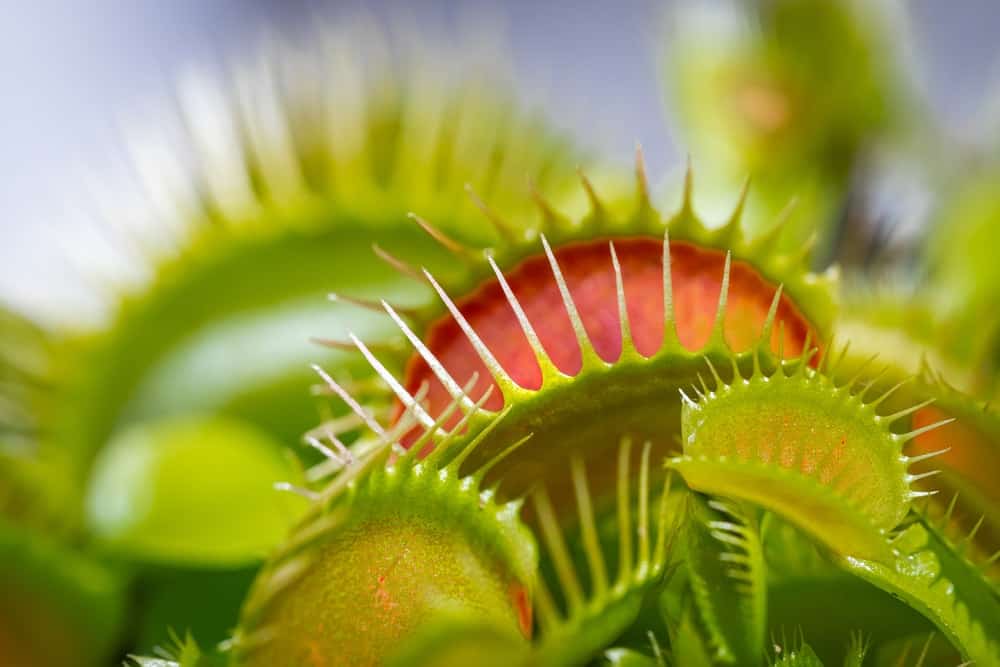 This is the trap used by the infamous Venus Fly Trap. Leaves shaped like a mouth that operates with a hinge. The opening of the mouth is usually lined with sensitive hairs, that when triggered will engage the closing of the hinge. Certain snap trap plants can close their mouths in as little as 20 milliseconds! 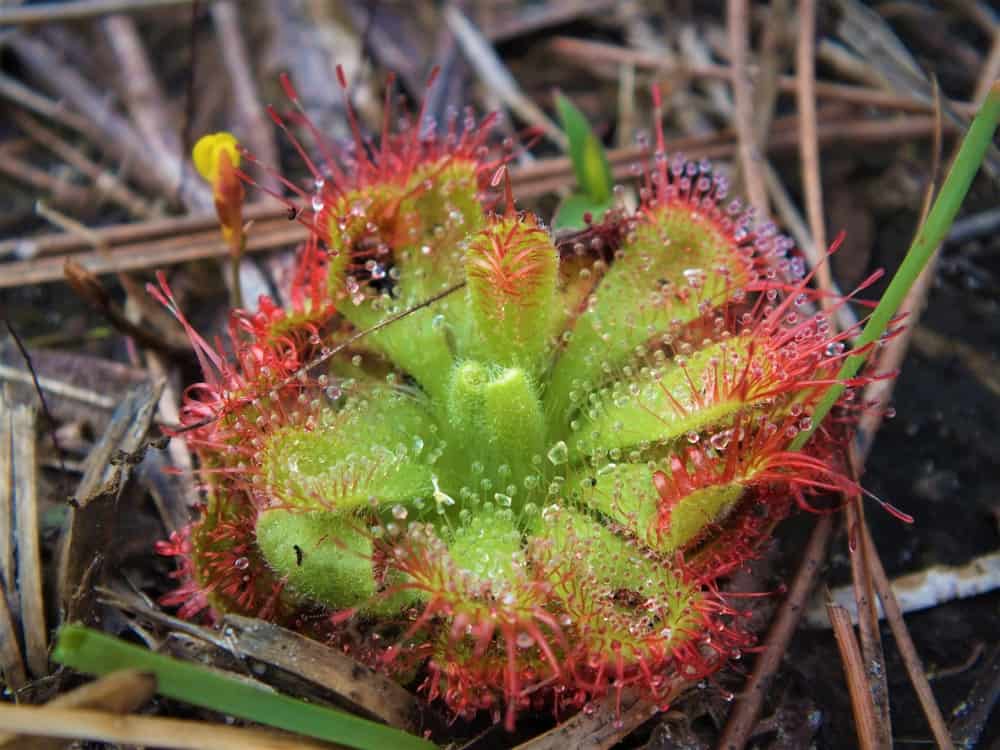 This type of trap gets its very own category thanks to only one plant that actually uses the mechanism: the Bladderwort! This type of trap has a hinged door that opens and closes when hairs are triggered. Although instead of closing like the snap trap, the prey is sucked inside usually due to a pressure difference inside the bladder.

Find out all about the bladderwort or suction traps here.

This trap is a particularly weird one. The stem is an extension of leaves that are twisted into the shape of a corkscrew and plunge into the earth. Under the earth lays the bladder of the plant. The inside of the corkscrew is coated with directed hairs that allow prey to go only in the direction of the bladder.

Get to know more about the lobster pot traps or corkscrew plants here.

Not at all. It is common to think that they may be venomous, but they are only lethal to organisms tiny enough to be digested by them.

It is unlikely there is a carnivorous plant that would ever say no to any insect.

How did carnivorous plants evolve?

They evolved in order to survive to exist in soils that were very low in nutrients. They found a way to access another kind of nutrient.

How do carnivorous plants reproduce?

Carnivorous vary in if they are male, female, or bisexual. They reproduce by either seeding in place or having the seeds spread by other organisms.

It is not advised to eat carnivorous plants since the vast majority of them are endangered species.

Can I harvest carnivorous plants?

It would be incredibly frowned upon as they are almost all endangered, and because their standards of soil are quite specific. However, since Sundews are such common types of carnivorous plants, they can be found in certain exotic plant stores.

Savanna Lentz hails from no place in particular. Having moved 30 times before the age of twenty, the constant change in environment has earned her expert status in all things homemaking. Whether it be interior painting and designing, baking, hosting charming dinner parties, or colour coating her collection of books, she is the cool kind of Stepford wife. A double major in English Literature & Creative Writing has truly harnessed her ability for communication, and her knack for the strange and comedic has been read far and wide. Savanna loves contributing to any canon, from short fiction to music reviews, DIY projects to climbing lifestyle magazines. This multifaceted lady is a gemini ginger (oh god), and she has got something to say!
Scroll to Top