Learn all about the different types of cantaloupes so you can distinguish each type, know the distinct ideal growing time for each, and learn to differentiate cantaloupes from muskmelons. 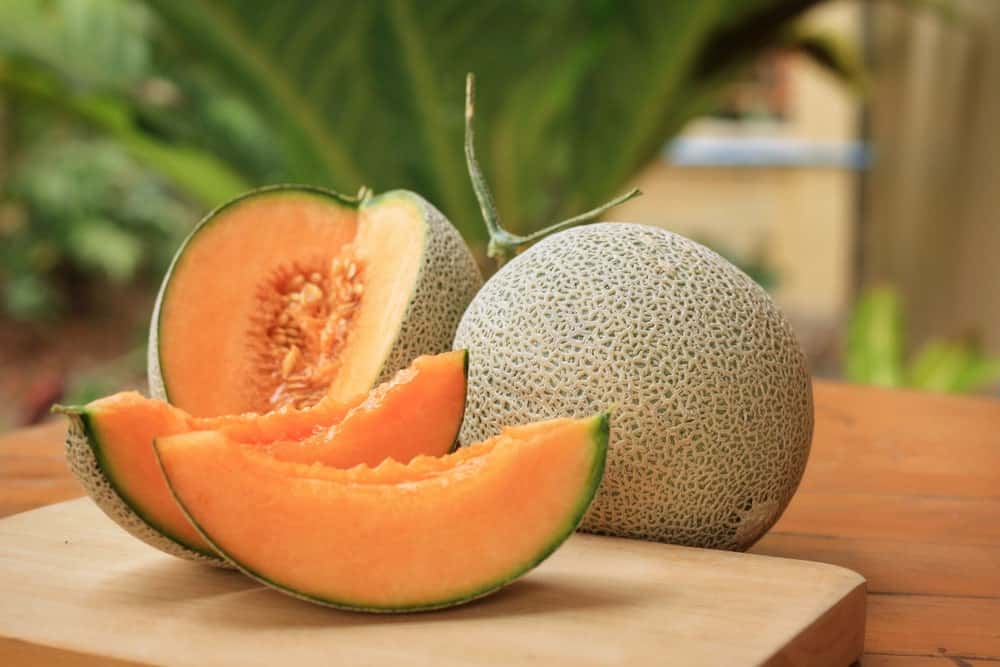 Cantaloupes, also known as muskmelons, sweet melons, and rockmelons, originally derive their name from the Italian Papal residence of Cantalupo, where they were homed when they first arrived from Asia. Cantaloupes are summer fruits, characterized by their sweet sticky insides, and hard shell-like exteriors. However, their color, size, and weight vary according to their types and places of origin.

Since cantaloupes grow better in warm environments and soils, it is best to plant the seeds in summer. They require soil that is well-tilled, well-drained, and fertile, and should be planted in an area that gets at least 8 hours of sunlight per day. For cold environments, you can cover the soil to enable it to absorb and retain more warmth. Cantaloupe seeds should be directly planted in gardens because when cantaloupe seeds are relocated, their roots tend to give up and the plant dies.

When the cantaloupes are ready for harvesting, these big fruit balls can be cut up and made into a variety of different delicious foods and treats. Cantaloupes are loaded with vitamin C, vitamin K, folate, and phosphorus. They can be made into smoothies, fruit salads, and even soups. 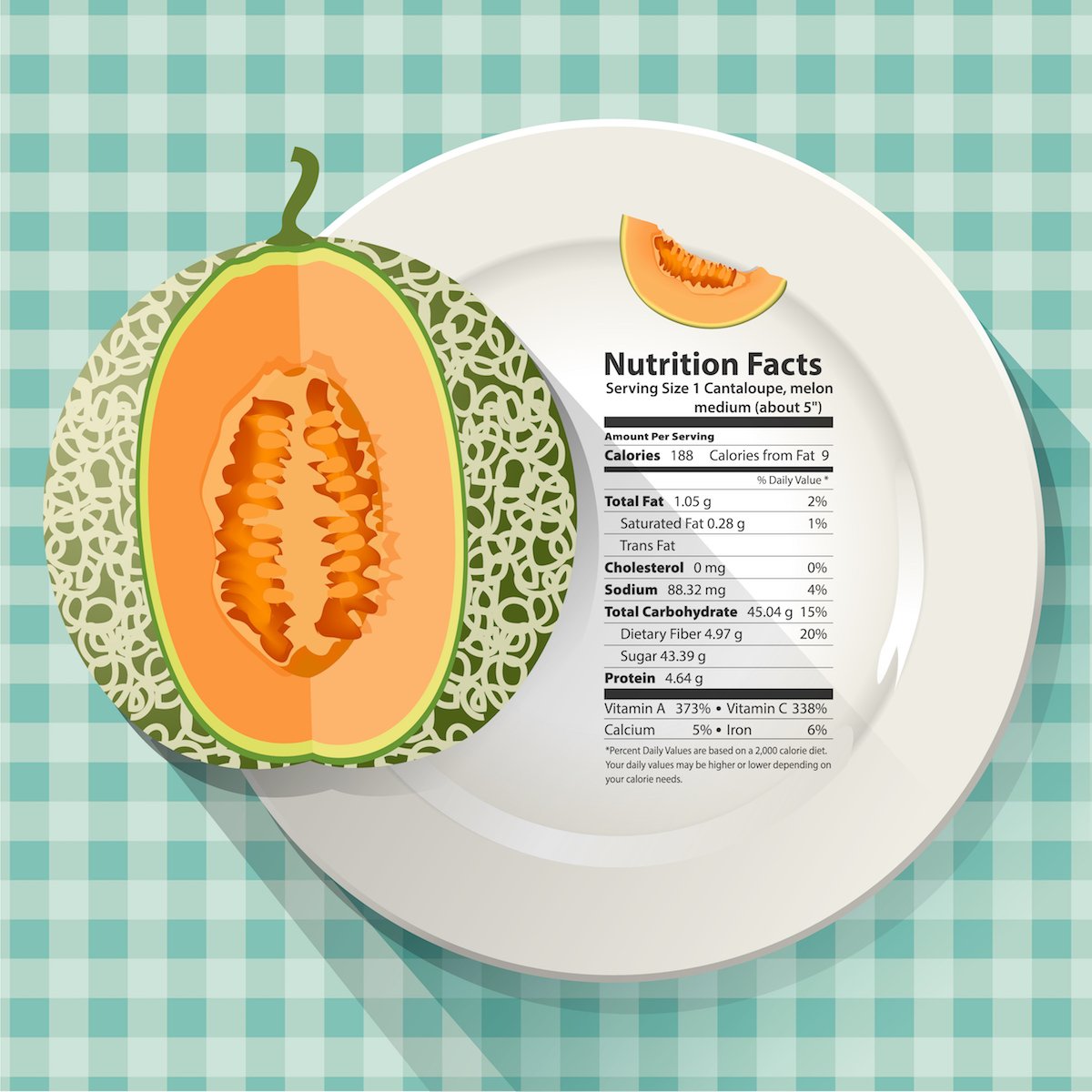 Is There a Difference between Muskmelons and Cantaloupes?

Though the difference is very confusing and has constantly been blurred over the years, technically yes, there is a difference between the two. While both terms are increasingly used alternatively, it should be clear that cantaloupes are a type of muskmelon.

Classified and divided primarily on the basis of their origin, all of the several kinds of cantaloupes have slight variations in the color of their flesh, their tastes, their sizes and the texture of their shells. 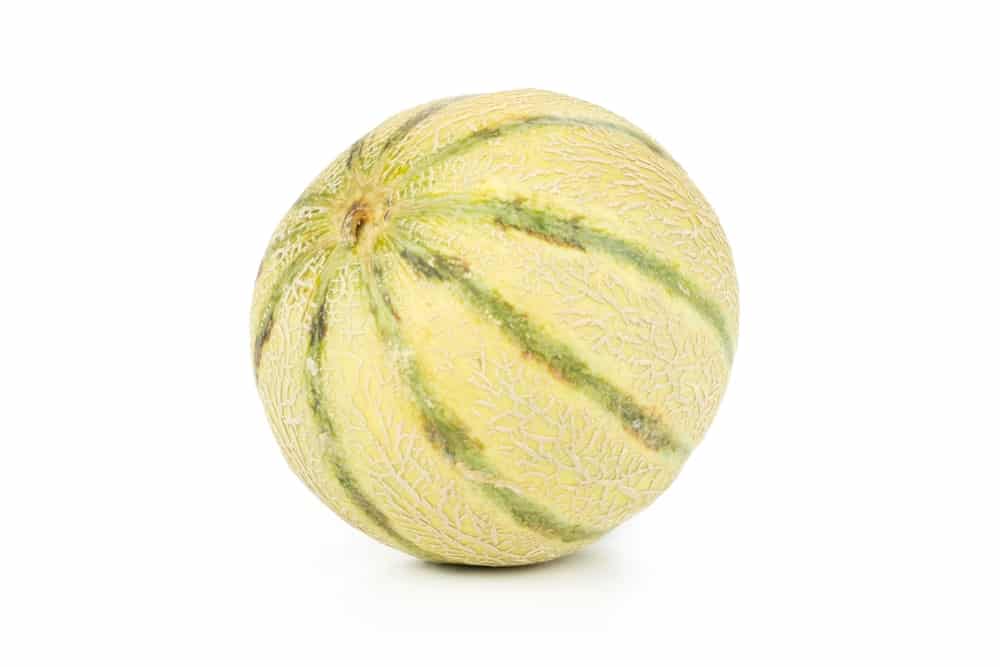 This is the real deal. Dubbed as the ‘true cantaloupe,’ European cantaloupes or Cucumis Melo Cantalupensis are characterized by their gray-green and tough rinds. The rinds are slightly netted or more often, not netted at all. Their exteriors are smooth light colors with green stripes, and no spider-web like crisscross patterns. Their flavors and smells are musky and sweet.

It is believed that these cantaloupes arrived in Italy in Europe from Africa or Asia. They were unfairly named cantaloupes because of the Italian place, Cantalupo, where they were harvested after they arrived from their sources. 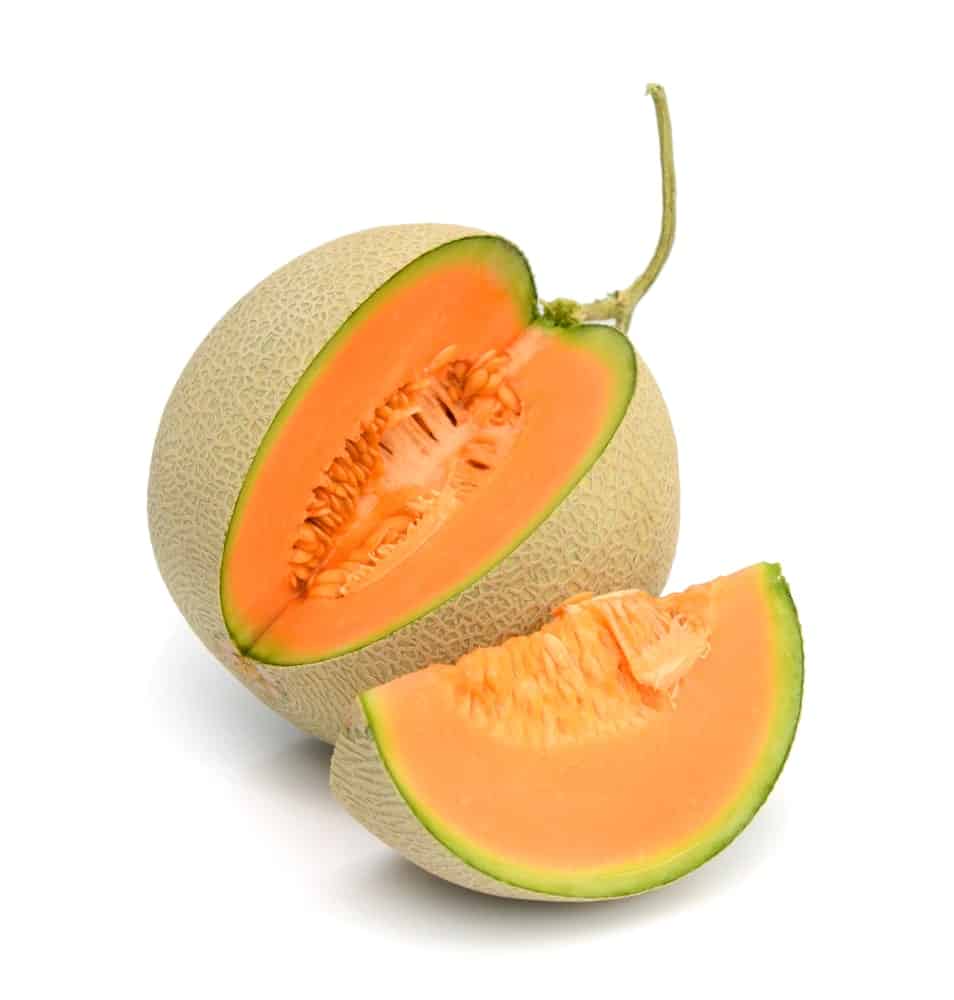 The North American cantaloupe (Cucumis Melo Reticulatus) distinguishes itself from the true cantaloupe by way of its rough, reticulated skin, over a pale yellow shell. The rind isn’t quite as hard as that of the True Cantaloupe, but the flavors and odor are similar.

The raised netting becomes more pronounced as the fruit ripens and the rind transforms from a greenish shade to tan, while the flesh remains juicy, orange, and fragrant. 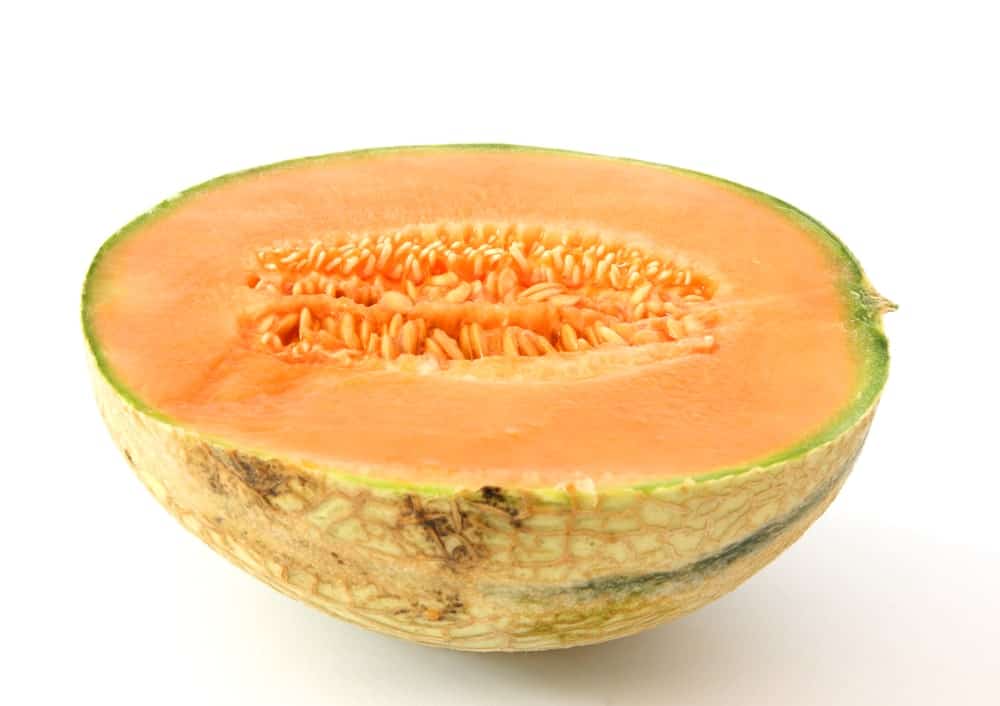 Some believe that the original cantaloupes actually originated from Asia. They traveled to Europe and were named after the continent, but the origins of this sweet musky fruit remained in Asia; more specifically, in Persia, which earned it its local name of Persian melon or Hami melon.

The Asian type isn’t as deeply netted as its North American counterpart, and its flesh isn’t as vibrant as the Western versions. Instead, the Asian cantaloupes (also Cucumis Melo Reticulatus) have pale orange flesh, more delicate flavors, and a subtle netting on a pale green or yellowish background. The flesh has a crispy tinge to it, while the North American cantaloupe flesh is normally soft and pulpy. 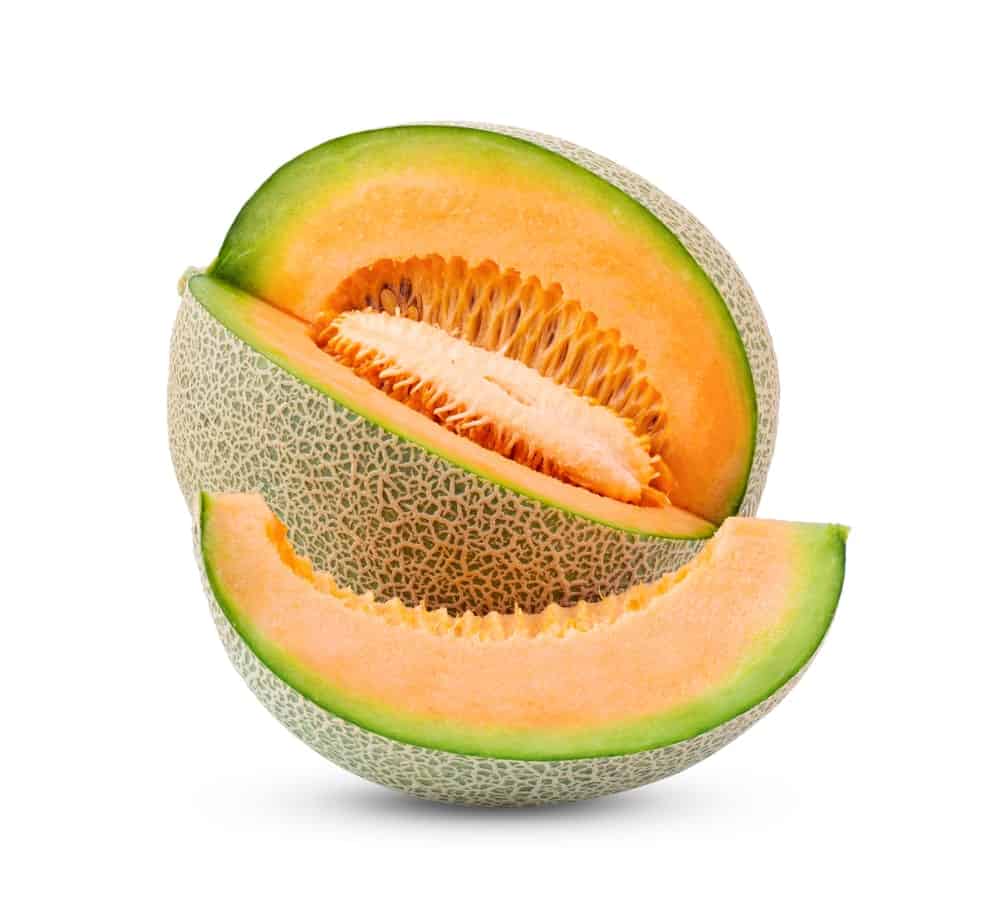 The Japanese cantaloupe is often referred to as the crown melon and is renowned for its size. The Yubari King melon, as it is locally known, usually carries prices suited for royals, too. They’re extremely expensive and show the status symbol of people who can afford it. Japan has an extensive gift-culture and fruits are generally considered luxury items – melons being the most expensive. Yubari melons are a common choice for gift-giving among the affluent.

The Yubari King is called so because it is only cultivated in the small town of Yubari, Japan. Each Yubari melon is grown with the utmost care and consideration. The process is extremely labor-extensive; the stem is pruned to the exact same lengths, the seeds pollinated manually, and the fruits massaged by hand. The Japanese cantaloupe isn’t only valued for its taste; it is quite the looker as well. Perhaps because of the royal treatment, it receives during its cultivation, it justifies the exorbitant prices and title of ‘king’ attached to its name.

Japanese melons have an exceptionally smooth rind and a perfectly round shape. They carry a pale yellow/orange flesh inside. The melons are then aesthetically packaged and can often sell for well over $200 each. 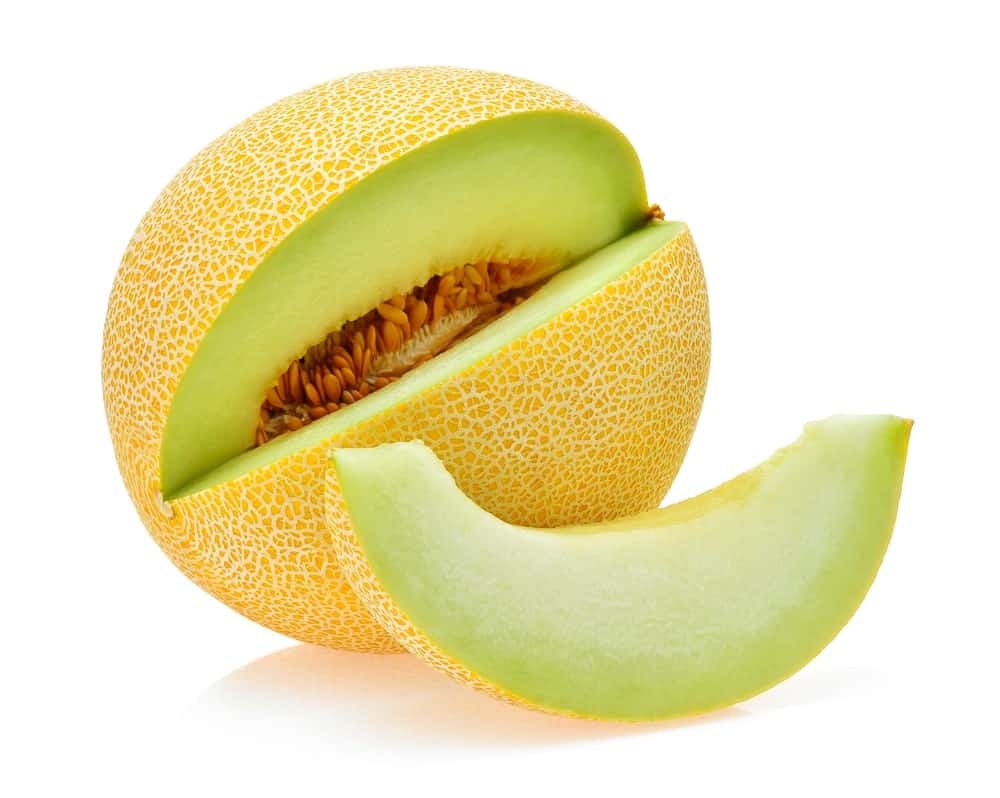 The Galia cantaloupe originates from Israel and is extremely popular in Southeast Asia. Locally known as Sarda, it is often debated that this is a melon and not a cantaloupe. The Galia has a sweet, pale yellow, or green flesh.

The scientific name of galia melons is Cucumis Melo var. Reticulatus. It is a hybrid of a cantaloupe and a melon and is often said to look like a cantaloupe from the outside, but a honeydew melon from the inside.

Galia melons aren’t as big in size as European and North American cantaloupes and are mostly eaten fresh, and chilled. Galia melons are juicy and have a wide variety of minerals, vitamins, and bio-flavonoids. They also contain low calories and no fats, making it a popular fruit to eat post-dinner in South Asian countries. 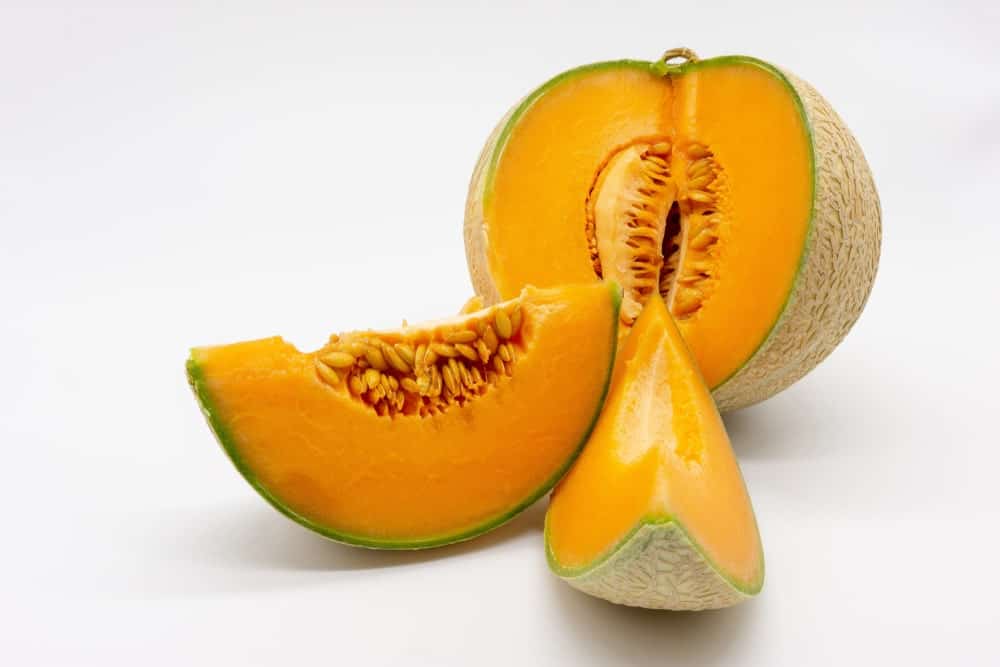 Charentais Cantaloupe or charentais melons is the signature French melon, originating in the Poitou-Charentes region in Western France. It is considered to be one of the best variants of cantaloupes ever produced, superior to its counterparts in terms of flavor, aroma, and texture. The charentais melon is smaller than most melons, and is hardly the size of a grapefruit, weighing just 2lb on average. The exterior is a smooth and a stony creamy-gray with faint green ribs, and the flesh is bright salmon-orange and dense. The fruit is flavorful with high sugar content, and extremely fragrant.

Biologically classified as Cucumis Melo Cantalupensis, they are often known as the French Cantaloupes. Though they originated in France, much of the production today is being done in North Africa. The cantaloupes are available in the summer months and are prized for their rich content of good beta-carotene, folic acid, and dietary fiber.

The line between cantaloupes and melons is incredibly vague, and it is increasingly being blurred to the extent that the term cantaloupe now encompasses all fleshy melons, with netted or un-netted rinds.

Scientists and botanists have tried cross-breeding one type with another to come up with better-quality hybrids of different types of cantaloupes and melons. The hybrids are a culmination of the superior qualities of the several varieties of cantaloupes and melons, like better resistance to diseases, stronger flavor, longer shelf-life, better texture, etc. The hybrids also have smaller seed space, packing the rest of the fruit with the delectable flesh.

Some of the favorites among hybrids and relatives are listed below. 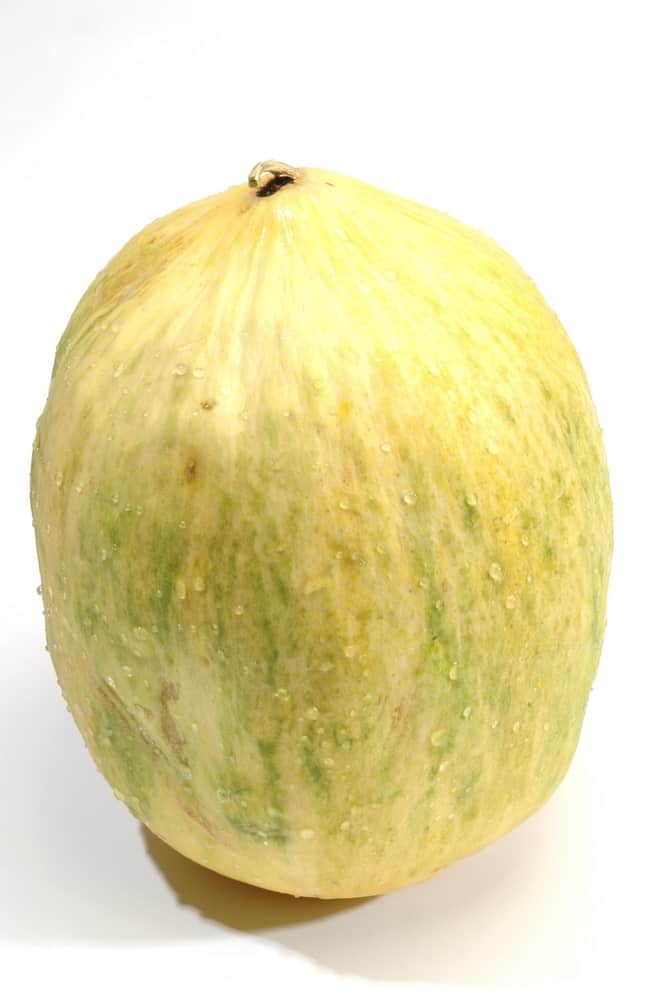 A hybrid of Casaba and Persian cantaloupes, Crenshaw melons are nicknamed the ‘Cadillac of Melons’ because of the superior taste they pack. Crenshaw resembles its parent melon, casaba a lot. While Crenshaw may lack in fragrance, it has a better shelf-life and a better flavor than both of its parents.

It is pretty large in size, weighing about 8-10 pounds each. It has a buttercup-yellow rind, with a waxy touch to it and textural striations running from one end to the next. Crenshaws also have peachy flesh, similar to a cantaloupe’s, which is juicy and sweet to taste. In fact, it is known to be one of the sweetest melons there is. Packed with vitamins A, B6 and C, it is a common ingredient in fruit salads. 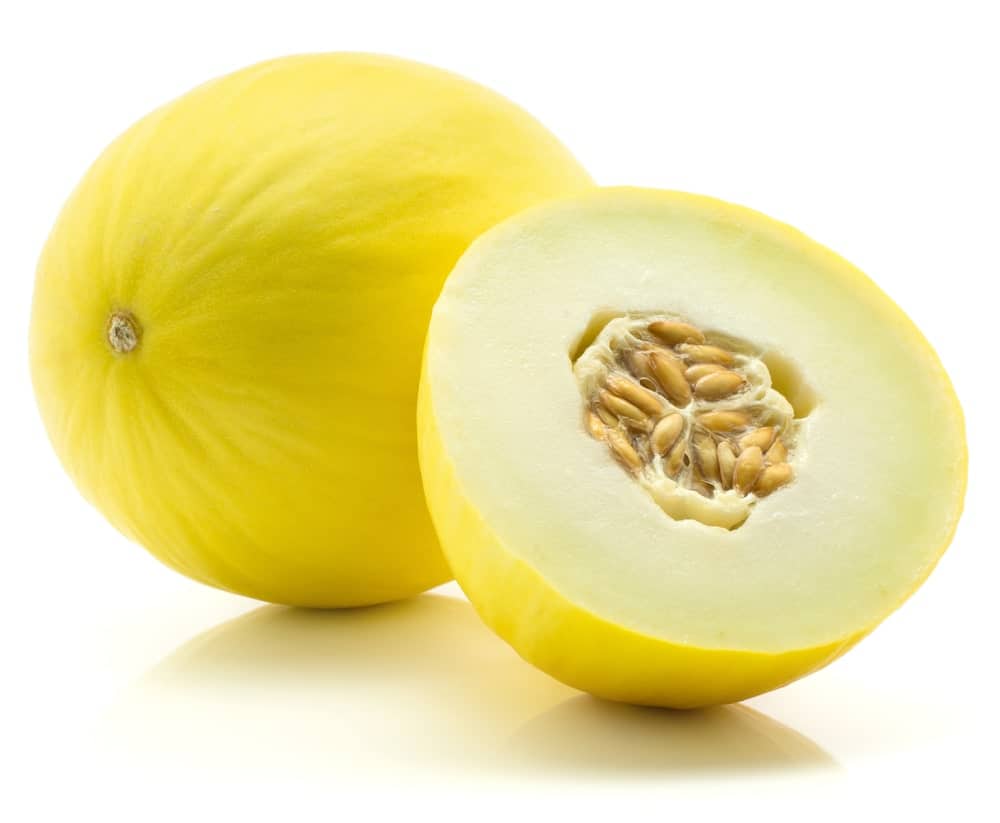 Grown in semi-arid conditions, honeydew melons are simply another name for the White Antibes cultivars in Algeria and France that have been growing for years. Honeydews are a very close relative of cantaloupes and belong to the same species, Cucumis Melo. However, they are different fruits. A sweet melon with a flesh that is reminiscent of cantaloupes, and an un-netted rind, honeydews are easily the most common melon around.

Honeydews are part of the Cucurbitaceae (gourd) family, which is divided into fruits (melons and cantaloupes) and vegetables (squashes, pumpkins, and cucumbers).

It features an almost whitish-yellowish waxy shell with subtle green striations while the flesh inside is light green. Honeydews are from the inodorous group of melons, which means it has no distinctive smell of its own. Honeydews have almost exactly the same nutritional value as that of a cantaloupe. They contain 90% water, which means they are good for rehydrating and are a good source of vitamin C.