Boysenberry fruit is extremely delicate and perishable. There are several varieties of boysenberry that we will discuss in this article and their brief history. 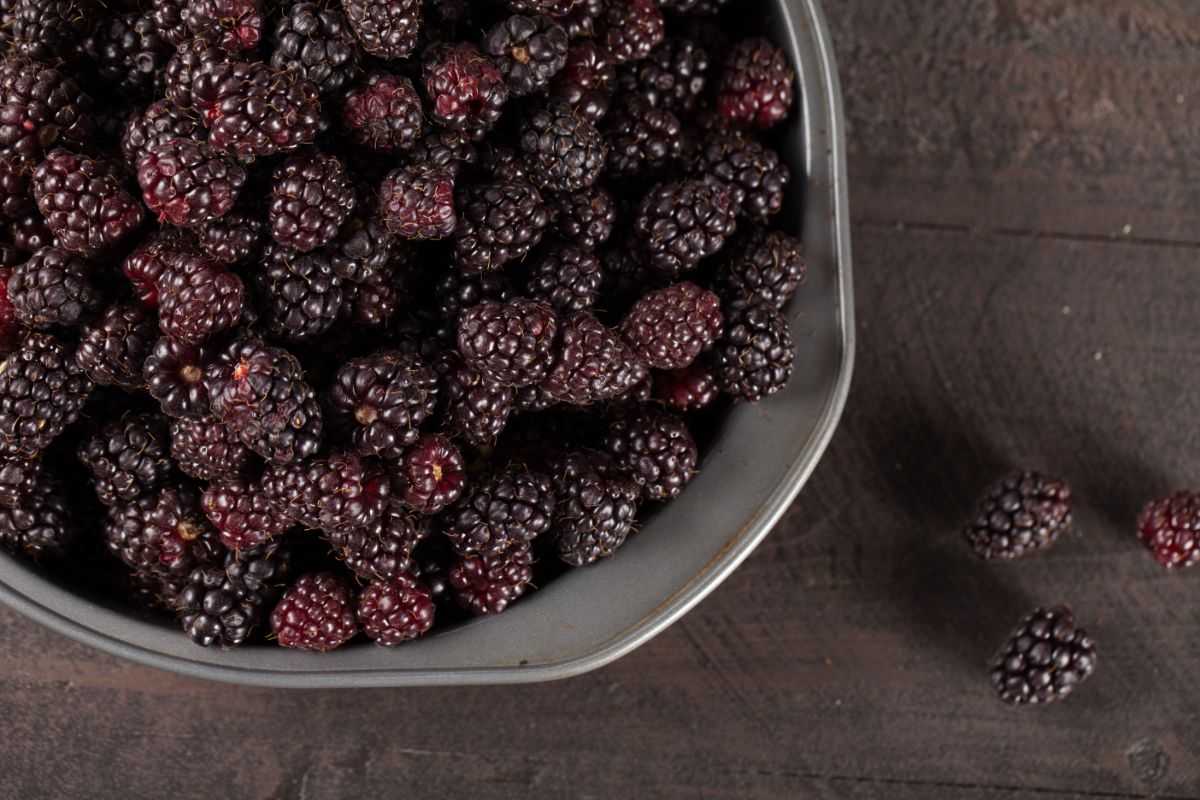 Boysenberry, to me, was always the one flavor of fruit on the bottom yogurt that I genuinely liked.  I would buy yogurt with intense feelings of virtue, but knowing in my heart, the only ones I’d eat were the boysenberries.  Alas, it’s been years since I’ve been able to find them.  Maybe I’ll grow boysenberries along with my other fruits here on the little farm in the woods and then learn to make yogurt. 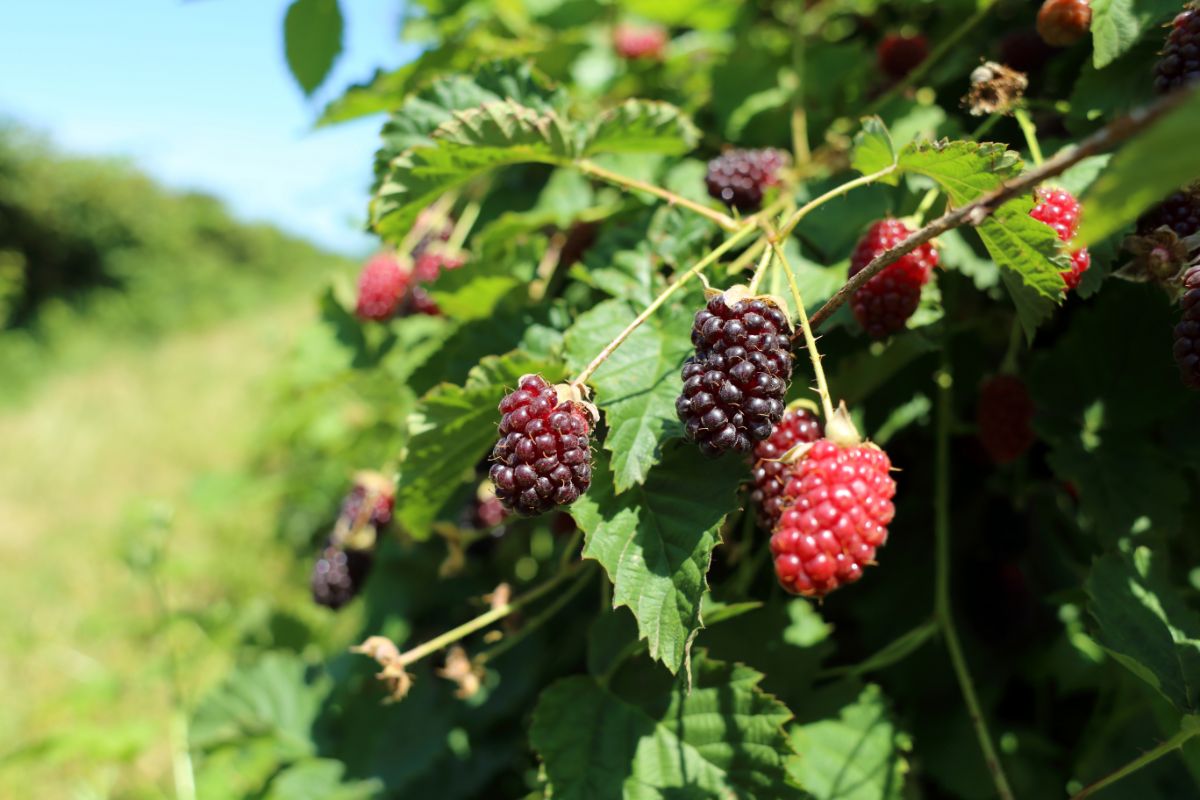 Most people think boysenberries are descended from a cross between the loganberry (Rubus x loganobaccus) and the dewberry (Rubus ursinus). The hybrid is often credited to Rudolph Boysen, but the first commercial grower was Walter Knott.

The boysenberry fruit is extremely delicate and perishable. All types of boysenberries are rated as hardy and ranked for growing in USDA plant hardiness zones 5 or 6 through 9.  (Since I’m a 5a, I should be able to grow these with my cherries, raspberries, gooseberries, and blackberries.)

Most boysenberries have thorny canes or branches.  Some believe that the thorny varieties are more cold-tolerant, but they all have the same USDA hardiness ratings.  Boysenberries have a complex hybridization record which leads to them being called nectarberries, youngberries, and hybridberries.  All of these can be thorny or thornless.

The thornless varieties actually do have thorns, just fewer and smaller than in the so-called thorny types. 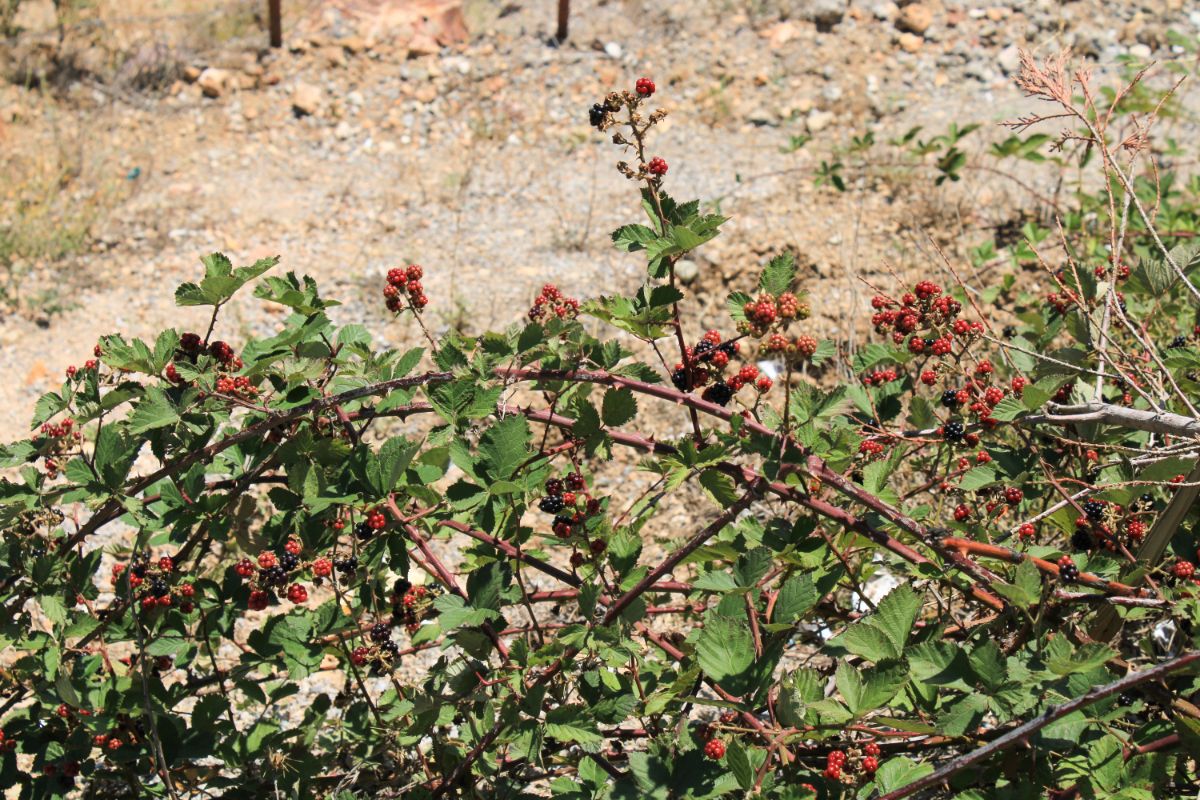 Boysenberries grow best in moist soil heavy with decomposed organic matter.  They prefer a long, temperate growing season.  Unlike gooseberries and raspberries, boysenberries have runners that have to be trained to upright supports, or they will simply creep along the ground.

After the season, the plants should be pruned with eight to 12 newly sprouted branches, each cut back to about six to eight feet, left to mature for the following year’s growth. Boysenberries produce fruit at two years old.

History of the Boysenberry 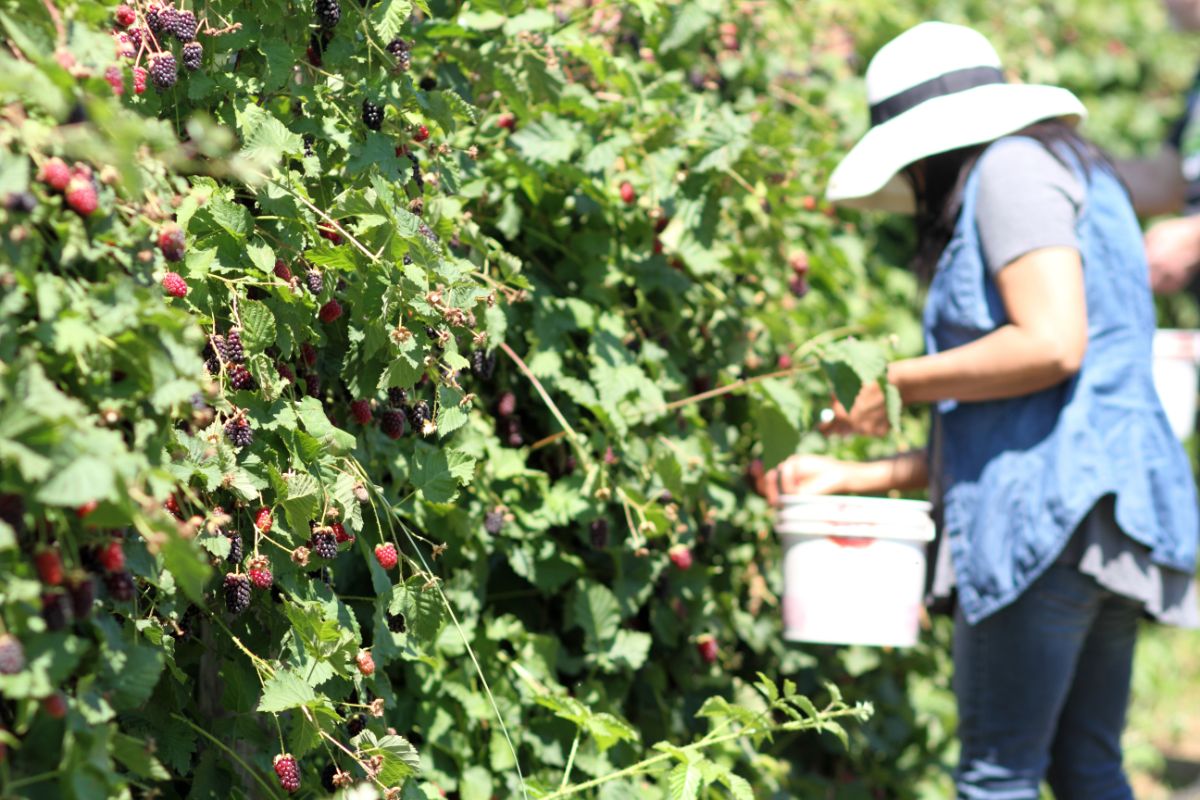 The boysenberry – a hybrid of the dewberry and the loganberry – is generally traced back to Rudolph Boysen, who obtained the parent from John Lubben’s farm.  In the late 1920s, the USDA began to track down reports of a large, reddish-purple berry growing on Boysen’s farm in Anaheim, California.

Working with Walter Knott, another berry expert, Darrow determined to find the berry.  Eventually, they tracked down Boysen’s old farm and were able to rescue some of the surviving boysenberry vines.  Knott took the survivors to his farm in Buena Park, California, where he was able to get them to bear fruit.  Knoff of Knott’s Berry Farm became the first to cultivate the boysenberry commercially in southern California.

Knott began to sell the berries at his farmstand in 1932 and noticed that they sold exceptionally well.  Knott always told those who asked that the delicious sweet berries were called Boysenberries.  Knott’s family restaurant and pie business eventually became Knott’s Berry Farm. 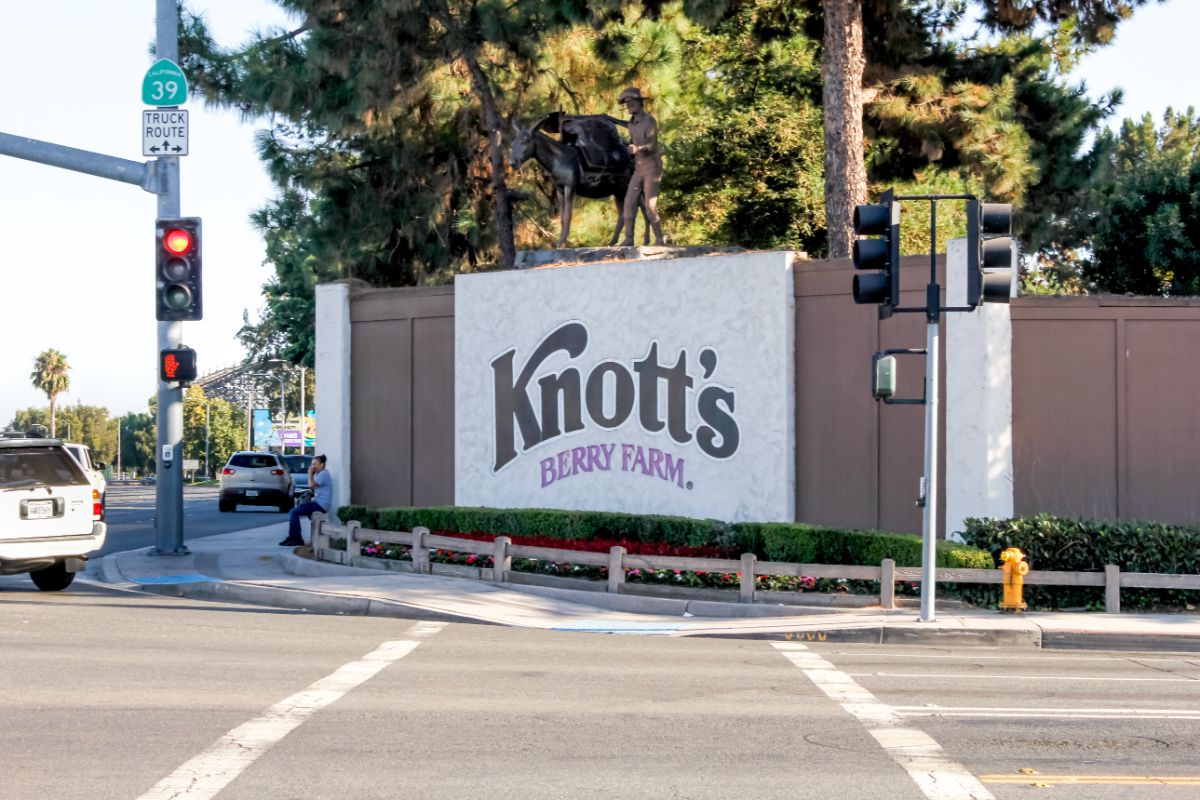 As the boysenberries continued to grow in popularity, Mrs. Knott started making preserves from the berries, which eventually made Knott’s Berry Farm famous throughout the country.  The berry’s popularity grew until, by the 1950s, Knott had 2,400 acres under cultivation, and overall, boysenberry crops exceeded those of the raspberry and blackberry..  However, by the 1960s, the difficulty in cultivating the boysenberry combined with its susceptibility to fungal diseases and its fragility, the boysenberry began to lose its popularity.

In the 1980s, breeding efforts in New Zealand created five new thornless varieties working with the California berry and others from Scotland.  By the early 2000s, fresh boysenberries were only grown and sold locally by small farmers.  Commercially grown berries, mostly from Oregon, become jam, pie, juice, syrup, and ice cream. (Note, sigh, that my yogurt is not listed.)  As of 2021, New Zealand was the world’s largest producer of boysenberries.

Like many the dark red and purple berries, the boysenberry is known as a superfood, high in Vitamin C and antioxidants.  Many consider the boysenberry to be the super berry of these super foods.  It has strong anti-inflammatory properties, and high levels of polyphenols. 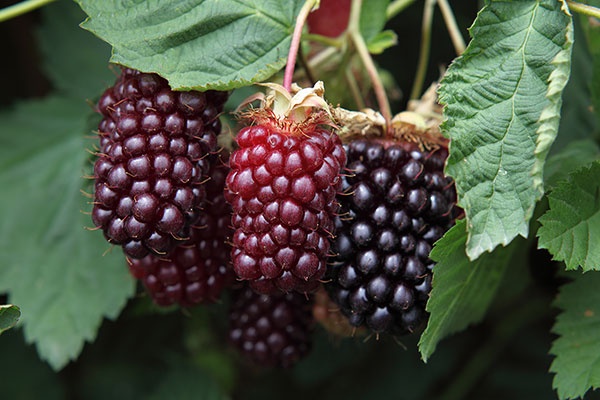 The division between varieties of boysenberries is thornless versus thorned.  The following will look at some of the varieties available within those classes.  Unlike many other berries such as gooseberries and black currants, which have dozens of varieties, Boysenberries do not have a large number of varieties.

A thornless type of boysenberry, Brulee

First cultivated in 2007, the Newberry was developed to overcome some of the cultivation issues that brought about the decline in the popularity of boysenberries.  It is a hybrid of marionberry, loganberry, and boysenberries. Newberries are larger and sweeter than standard boysenberries.

In addition, the fruit is somewhat less fragile in shipping.  The Newberry, as is hinted by its alternate name, is a gorgeous shade of red rather than the purple of the original boysenberry. 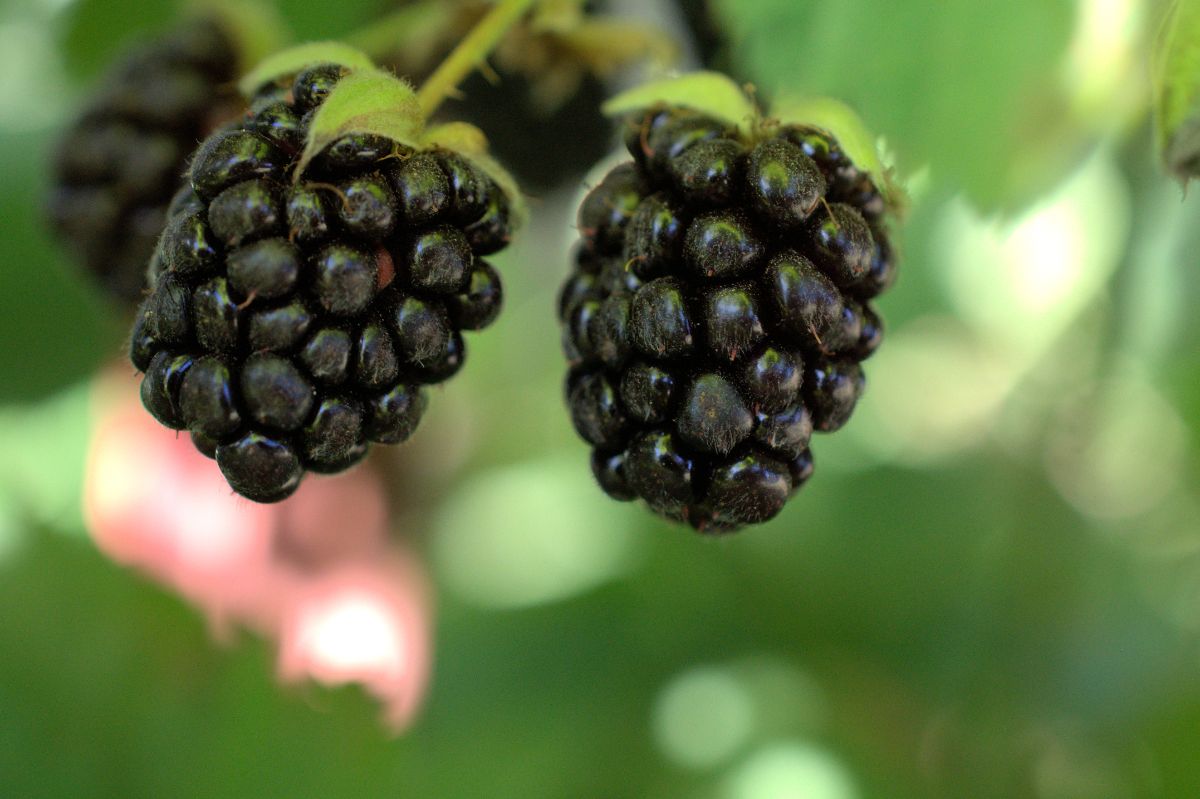 An Australian hybrid with the marionberry, SIlvanberry is generally considered a blackberry rather than a boysenberry.  They are long-loved perennials and have many of the features of blackberries.  The resulting fruit is softer than a marionberry.

It is also faster to sprout than most boysenberries, and slightly less flavorful and aromatic.  It is one of the top varieties of boysenberry grown in Oregon and is used mostly in jams, jellies, and pie fillings. 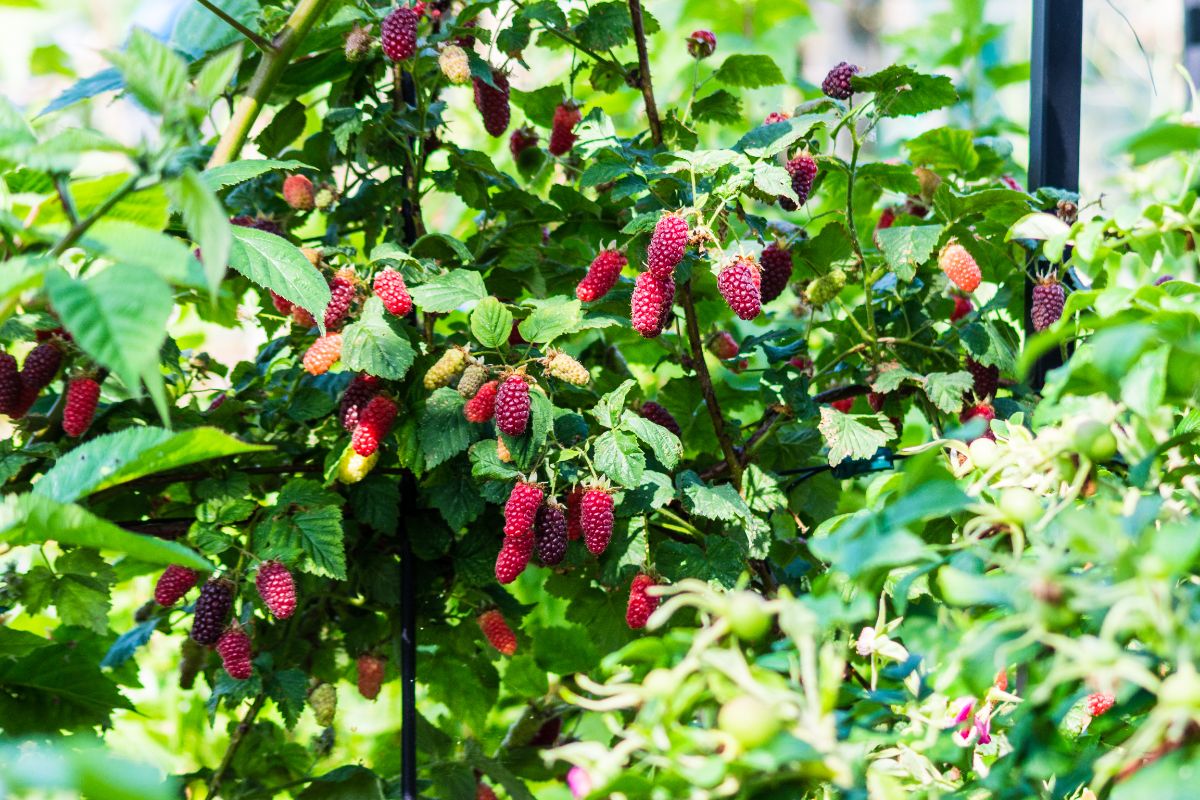 Most commonly sold boysenberry in the United States.  Thornless produces large, long fruits that ripen to a deep maroon color.  Juicy with a sweet-tart flavor and delightful arome.

A thornless hybrid that is also seedless.

Q.    What berries were hybridized to create the boysenberry?

Q.    Where are most boysenberries grown?

A.    In the United States, most boysenberries are grown in Oregon and California.  They tend to be consumed locally or in cooked preparations.  The worldwide leader in boysenberry production is New Zealand.  Much of the New Zealand crop is exported as frozen berries.  The Oregon crops are generally used for jellies, jams, syrups, and pies.  Boysenberries are a fragile berry and do not ship well.

See also  5 of the Most Popular Thanksgiving Pies

Q.    Who made the boysenberry famous?

A.    Boysenberries are subject to a variety of diseases and pests.  Among the more important ones are:

Q.    Is boysenberry good for you?

A.    Many people consider the boysenberry a superfood with its high antioxidant content.  Boysenberries contain a good amount of dietary fiber, vitamins E and  K, foliate,  and a slew of minerals including manganese, iron, calcium and potassium.

Q.    Why is it hard to buy fresh boysenberries?

A.    Boysenberries are more fragile than most other berries and do not travel well.  They are thus usually only found fresh in local farmer’s markets and are generally commercially available in frozen or canned forms.

A.    No.  First purchased by ConAgra Foods, Inc., the brand was most recently sold to the J.M. Smucker Co.  The brand is still separately maintained by Smucker’s and produces and markets jams, jellies and preserves in the foodservice, retail and gift box channels with about $40 million in annual sales.