Learn more about the different types of Boneset flowers that are popular not just for its attractive appearance but more so for its medicinal properties, including setting fractured bones for recovery. 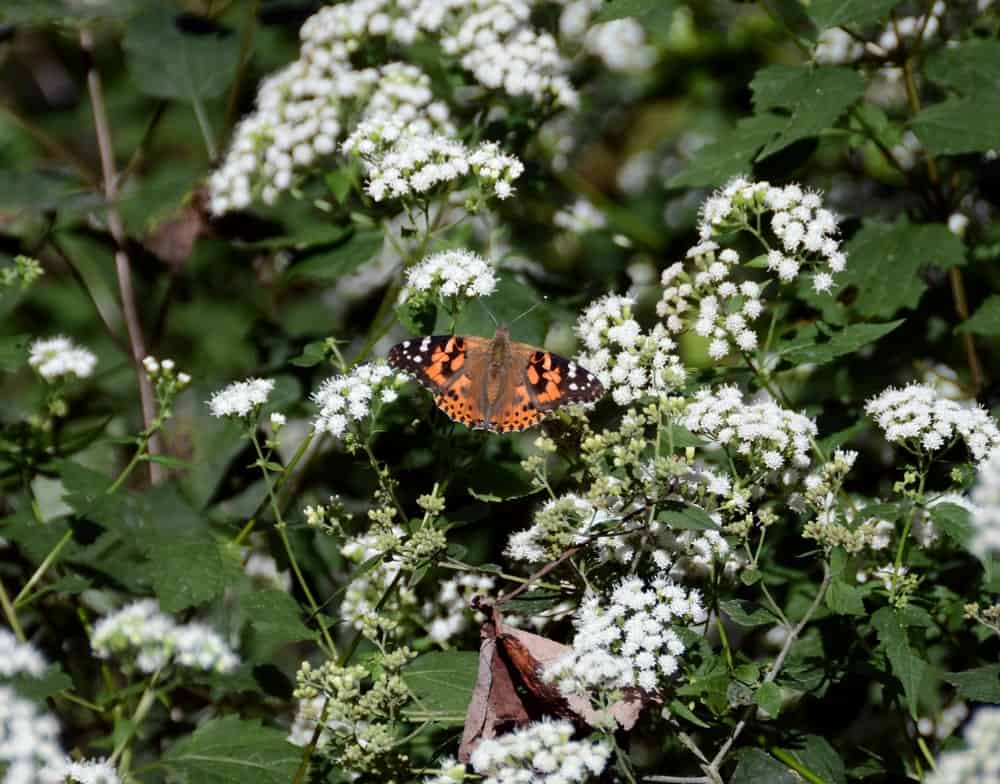 Boneset is the common name given to several perennials of the Eupatorium genus. This genus is a part of the Aster family (Asterium), and is known for its many medicinal properties as well as its attractive appearance. The versatile properties of the plant have given rise to names such as agueweed, feverwort, and the sweating plant amongst many more!

Native to the United States and Canada, these flowers have been called ‘boneset’ for ages because of their use in setting fractured bones to promote healing. They were also used to treat dengue or ‘breakbone’ fever. The flower was apparently discovered by Native Americans and used in medication for centuries before we discovered it. When the colonists arrived, they were taught the various uses of the plant and the flower too.

Here is a detailed account of the ecology of the plant, its uses in various illnesses and diseases, and all the different species that come under the boneset umbrella.

The plant can reach a height of 5 feet with its erect, rotund, and hairy stem that branches only on top. The leaves are large and arranged directly opposite each other; they are largest at the bottom and continue to progressively become smaller as they reach the top of the branch.

The flowers bloom between July and September in white or purple clusters at the ends of branches. Each bunch consists of 10-20 florets. The different species that are called boneset often have much different inflorescence and appearance in general.

The common boneset plant needs a damp environment, and hence, it is readily found in marshes and meadows near wooded areas. It is most often found in eastern US and Canada, ranging from Nova Scotia to Florida.

It is often planted by farmers for its substantial pollinating properties. The flowers attract sweat bees, small carpenter bees, digger and bumble bees. However, it is also highly attractive to pests.

Except the roots, all parts of the plant have medicinal value. The plant is harvested after the flowering has begun. After harvesting, the components of the plant can be extracted and separated in water or alcohol. It can also be used as a fresh or dry herb.

It is usually taken as a tea steeped in a cup of boiling water for 10-15 minutes. The taste of the tea is bitter, so honey and lemon are added to the infusion to make it more flavorful. 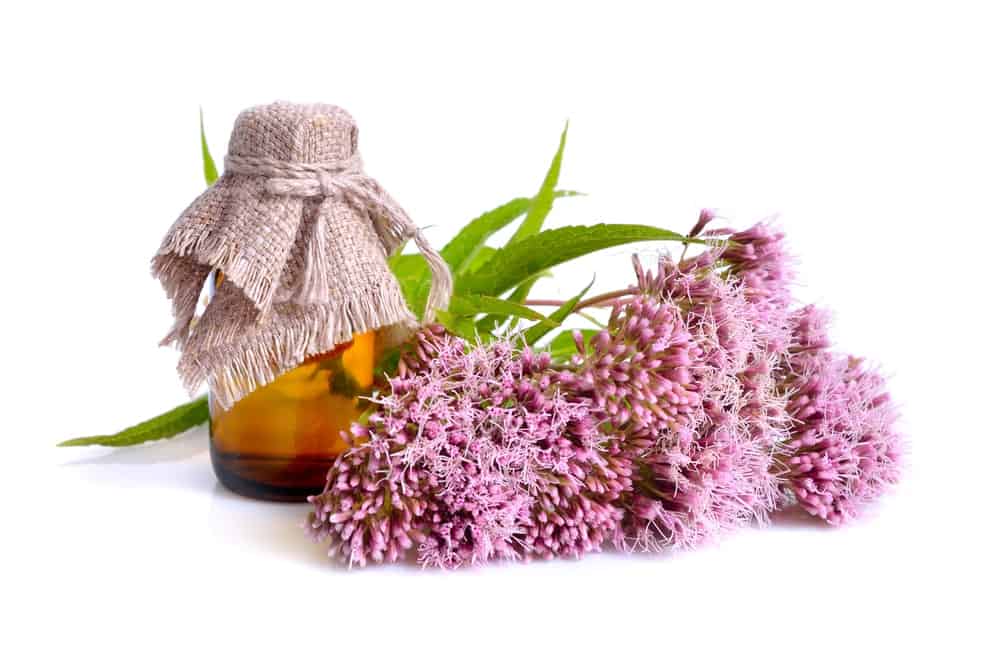 The Native Americans called the plant ‘agueweed,’ where ague is the name for malarial fever. They used it for other infectious diseases as well, such as influenza and colds. Fever, arthritis, asthma, rheumatism- no disease is a match for the boneset plant.

By the 18th century, European settlers had started considering the plant to be an all-encompassing treatment for common ailments. Dried boneset was a staple in every household and even doctors kept it on hand for immediate use during flu season!

Other uses include the treatment for headaches, skin conditions, jaundice, nasal inflammation- and even secondary symptoms that arise from such diseases- bronchitis, pneumonia, and tonsillitis.

There are several species of the Eupatorium genus that are referred to as boneset. Have a look at the most interesting ones: 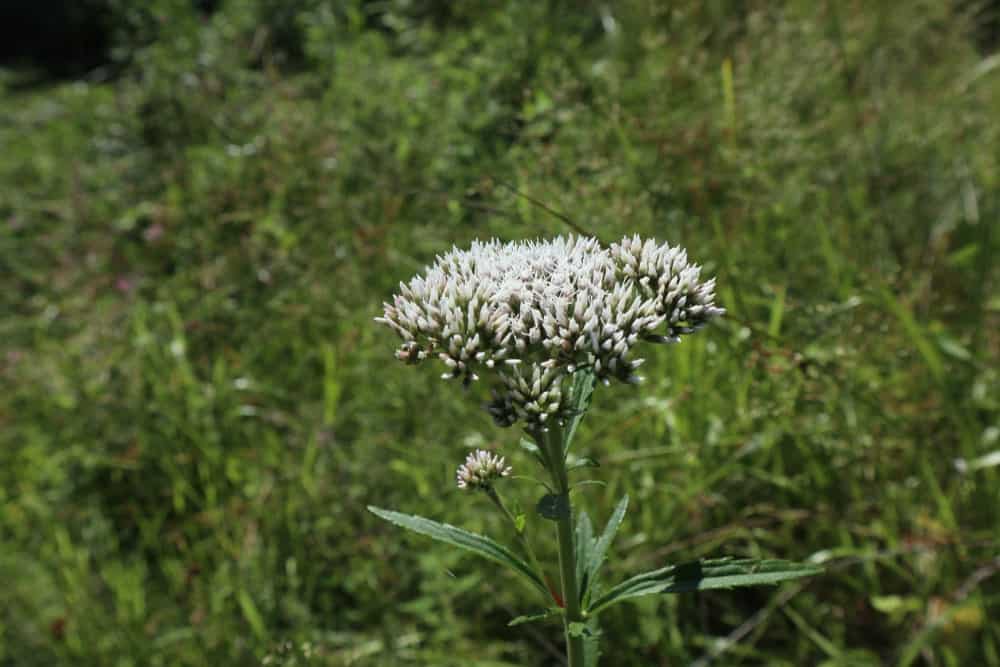 When people talk about the common boneset, they mean the Eupatorium perfoliatum. The plant grows to be about a 100 cm tall, with leaves that hug the stems. The flowers are in dense clusters of florets held slightly above the foliage and have a pleasant floral scent. This species is able to form hybrids with others from the same genre.

The plant prefers being in full or partial shade in moist conditions. The soil must have organic material so it can retain water and help the plant bloom. Pests and diseases cannot usually do much to harm the foliage.

This is the most commonly and naturally found perennial out of all the members of the genus. Its medicinal uses are widely recognized. 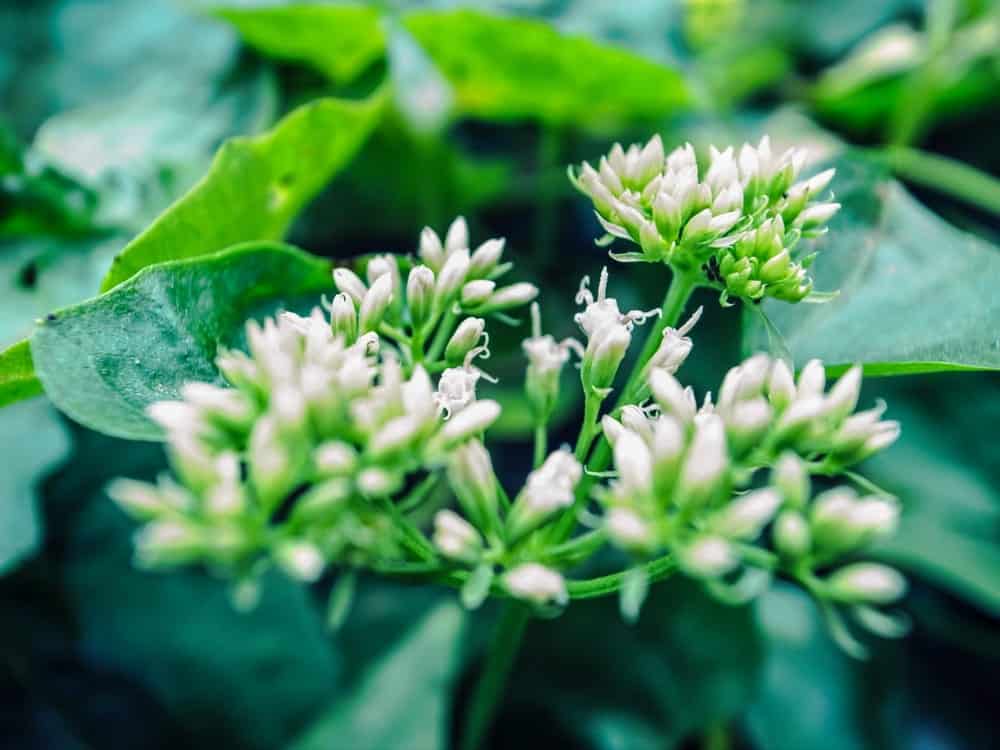 Known by the scientific name Eupatorium pilosum, the rough boneset is called so because of the ‘rough’ texture of its flowers. The stem can range from 30 to 100 cm tall, and it is sparsely branched. The leaves are simple, elliptic, with prominent veins.

The plant grows in low ground on moist soil in savannahs and ditches. It flowers from July to September in white, branching clusters. 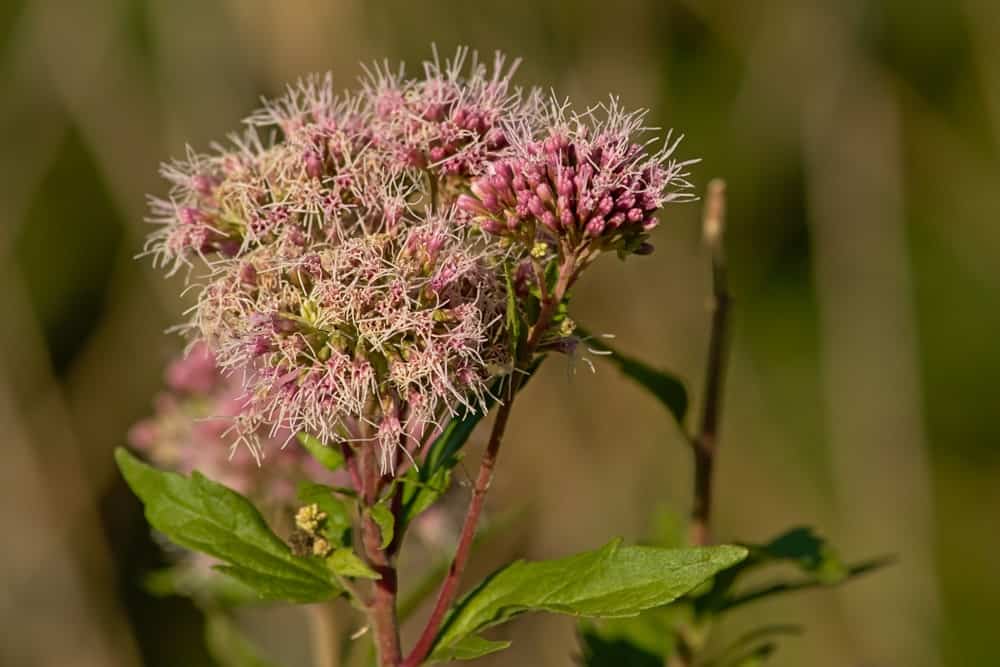 Also known as Hemp Agrimony, the plant is a handsome and tall perennial that is commonly found at the banks of rivers, ditches, at the base of cliffs and at seashores. If there is a damn place in Britain or Europe, you can expect to find the hemp plant there.

The root is woody and gives rise to round stems that can be up to 5 feet high. The stems are reddish in color and covered with down. They give off a pleasant aroma when cut. Late summer and early autumn is optimal time for this plant to bloom. The flowers grow in lilac bunches at the tops of stems.

A kind of oil can be derived from the leaves that acts on kidneys, and some other chemicals that cut fevers off. 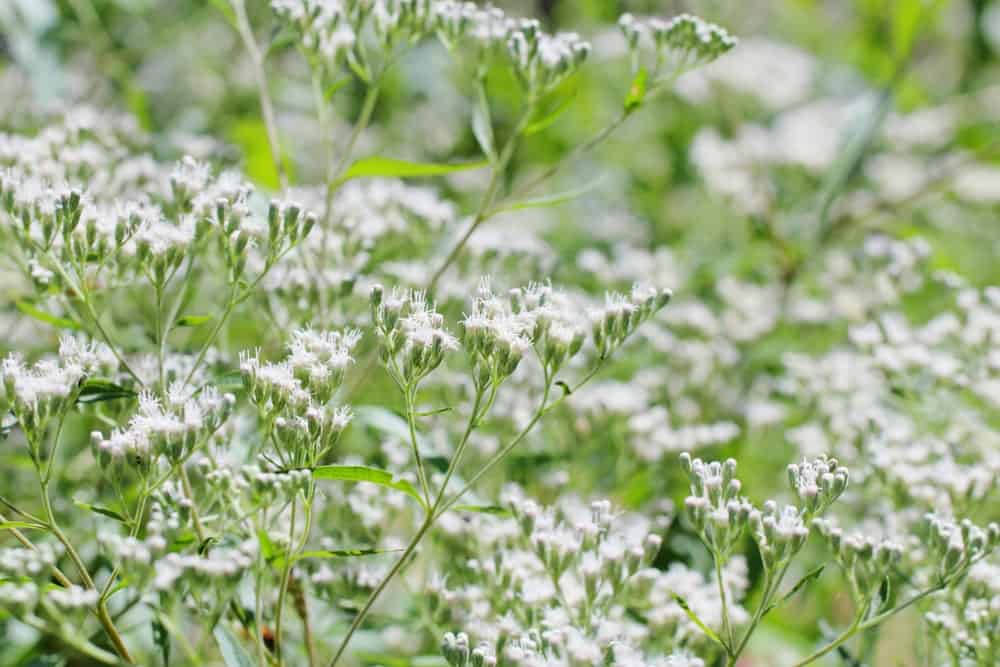 Known by the scientific name Eupatorium resinosum, the pine barren thoroughwort is a rare North American plant. Although it is native to coastal areas of the US, some populations have been found growing in the Carolinas and New Jersey.

The stem of the plant is about a 100 cm tall with short rhizomes. The flowers are tiny, white florets arranged in flower heads. It is pollinated by insects alone since it is self-incompatible. Only a dozen naturally occurring populations have been found which is why the plant is one of the rarer species of the genus. 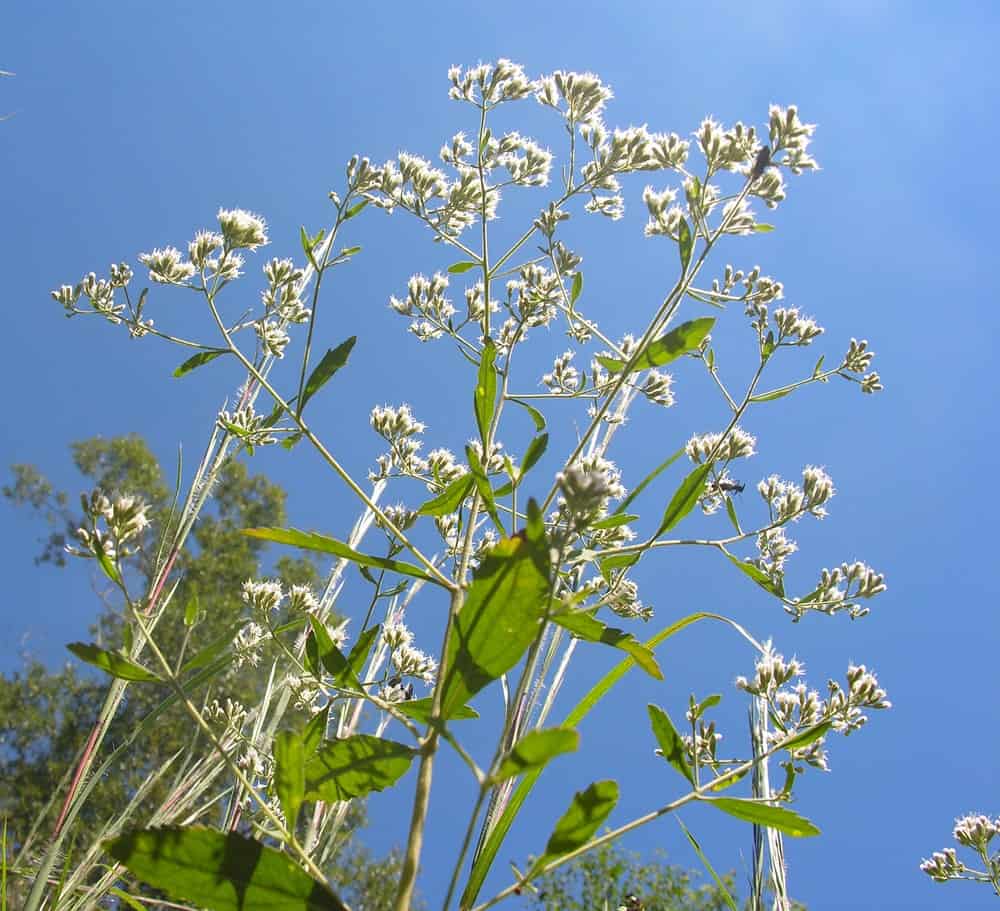 The upland boneset plant is a Eupatorium species found in North America. It belongs to the sunflower family. Native to eastern and central US, the species is naturally occurring in Maine, North Carolina, and Alabama.

It is a perennial herb with stems that can be as tall as 40 inches in height. The leaves are arranged in pairs opposite each other and are toothed from the edges. The bases are rounded and the leaves are lack stalks. The flowers bloom in August and September; they are branched, tiny in size, and have several small florets that make up the inflorescence.

In Michigan, the upland boneset is a threatened species and it is legally protected in the vicinity of the state. 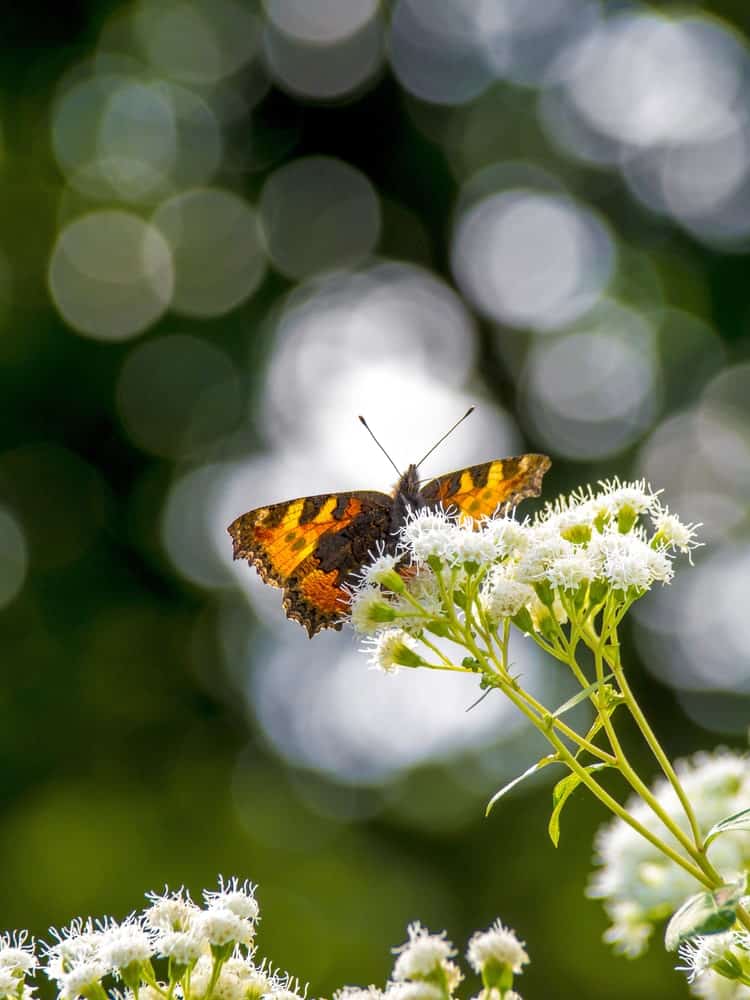 Also known as the Tall Thoroughwort, the plant is a perennial that grows in partial or full sun in open woods, thickets, and prairies, along railroads and in waste areas. The flowers bloom in August and September, and grow in branching clusters of stalked flowers. One cluster has about 4-11 flowers each. The leaves have parallel veins and widely-spaced teeth.

They are known as ‘tall’ because they grow up to be about 6 feet in height. 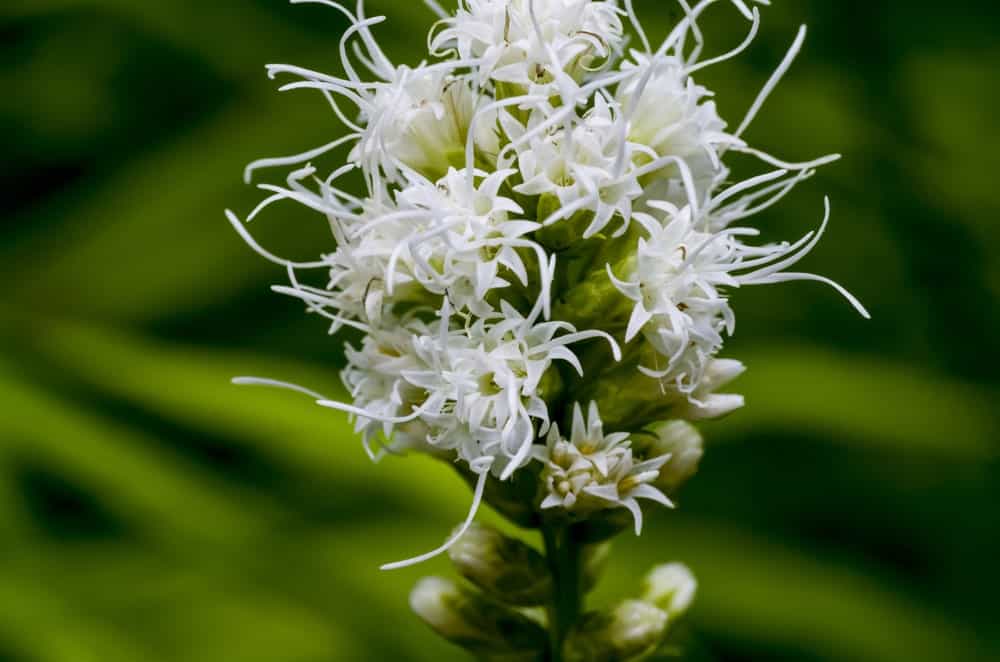 Belonging to genus Ageratina of the Aster family, the white snakeroot is a weed that grows in shady spots throughout spring and summer. It is a tall, four-foot plant with dark green toothed leaves. The flowers are especially important to hungry insects like bees, moths, and flies since the plant is a late bloomer; when food becomes scarce, the white snakeroot is a godsend.

The plant is smooth-stemmed with slightly branched bright white flowers. It is found in shaded woodlands and naturalized landscapes. 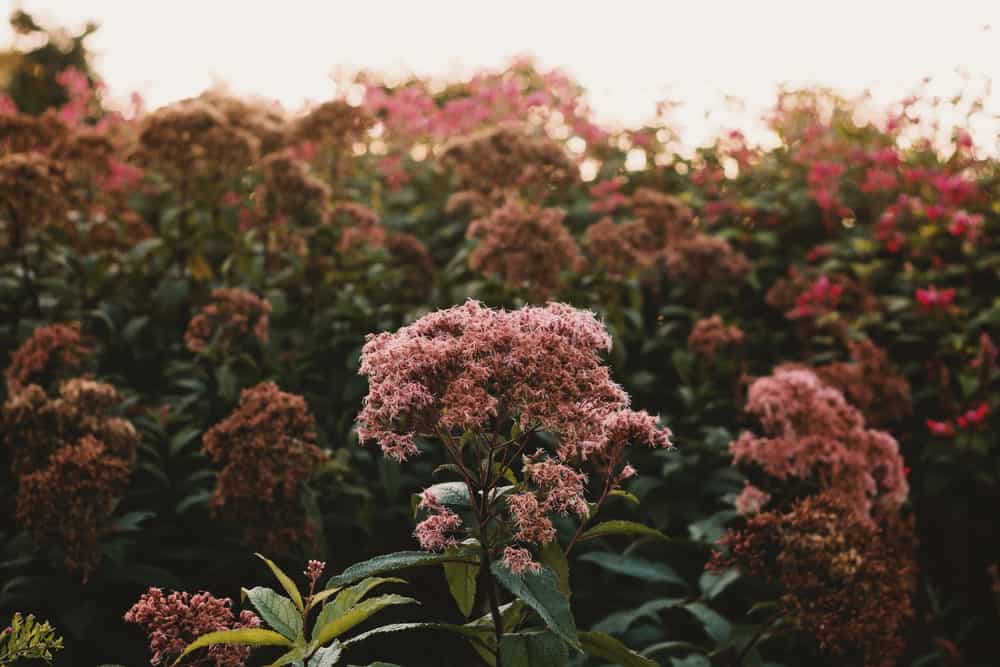 Belonging to the aster family, the spotted Joe Pye flowers are known for their ornamental value and their ease of cultivation. The stems are erect, tinged with dark purple and branched with flat tops. The blossoms range from purple to mauve and have a heady, pleasant fragrance that is attractive to bees and butterflies looking for nectar.

The plant flowers from midsummer to fall and stays that way throughout winter. In height, the herb can grow to be about 8 feet tall. It is an excellent choice for gardens and flowerbeds. 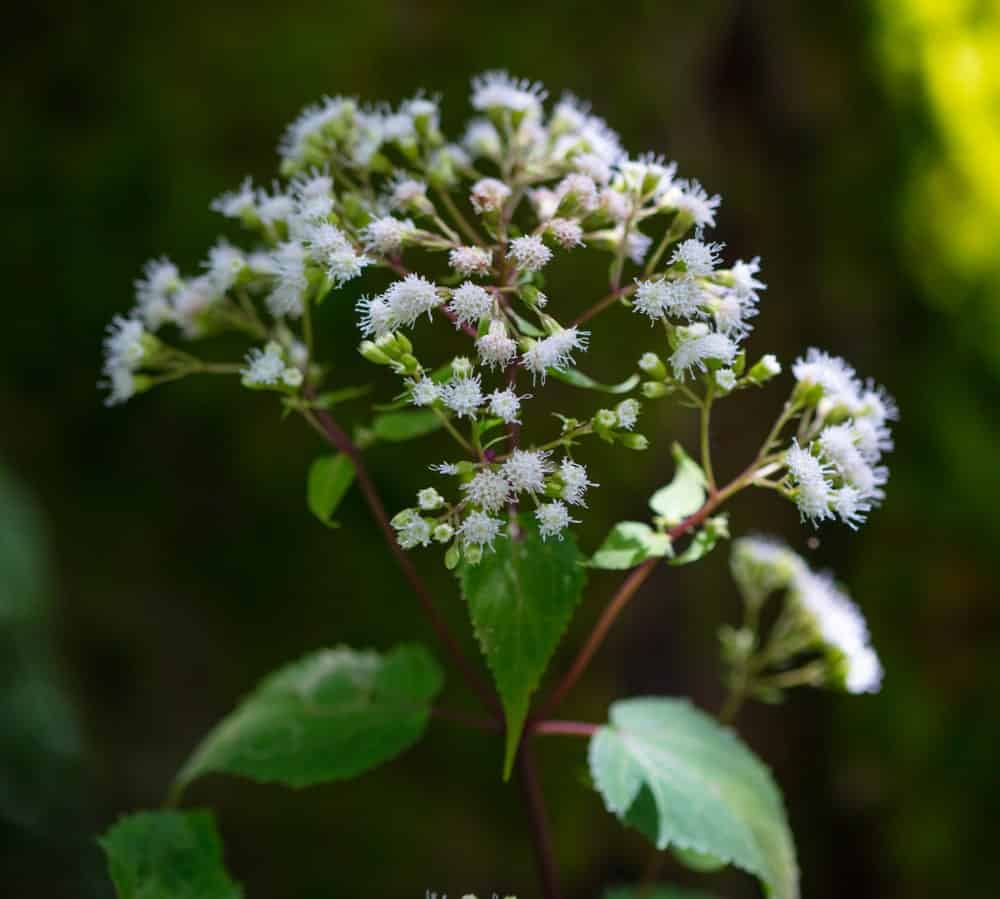 The late boneset plant, which belongs to the Aster family, is adaptable and hardy, growing in a wide variety of habitats. It has slender, serrated leaves and showy, white wildflowers. The plant grows to be about 4-5 feet tall and blooms in late summertime, remaining fresh well into fall.

From Nebraska to Texas, the late boneset is found almost everywhere in the eastern US. It prefers moist soils, but can tolerate a mild drought if need be.

Its common name comes from the fact that it is a late bloomer, and hence, attracts rare animals like the Monarch butterfly from faraway places since no other flower is available so late in the year. It has been termed the Queen of the Meadow by wildflower enthusiasts. 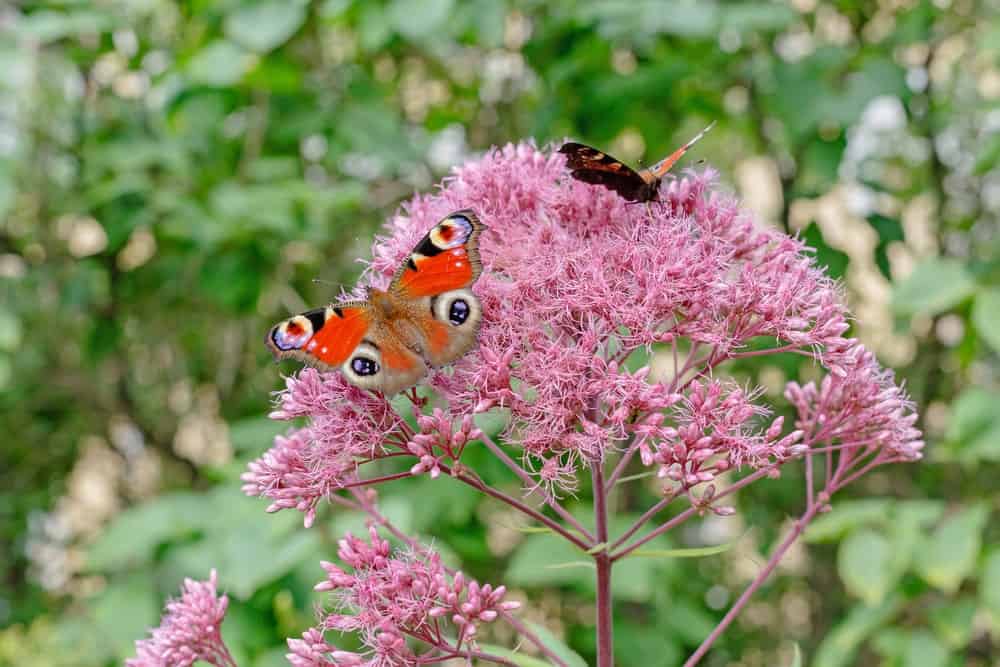 This erect perennial is known for forming clumps of flowers on top of its stems. The plant grows to be about 7 feet tall and has leaves that are lance-shaped, serrated, and arranged in long whorls. The flowers are a dull pinkish-purple in color and vanilla-scented.

The blossoms appear in mid-summer and last until early fall. It is best kept in full sun and partial shade in soil that is slightly moist. It is an easy plant to grow because of its resistance to insects and diseases. 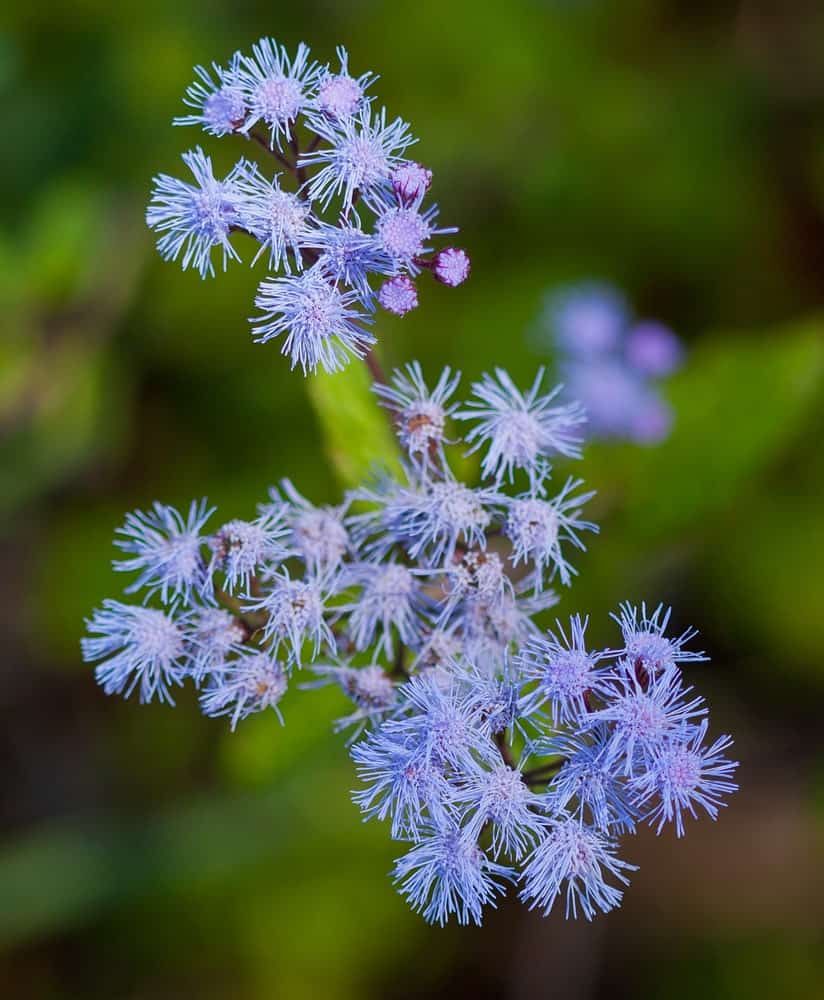 Because of its attractive blue color, the mistflower is a magnet for butterflies. The plant has a cluster of frizzy blooms at the top of its branches and leaves that are either deltoid or highly digitate (separated into digits). It is also known as the blue boneset.

During winter months, the plant dies down, but it appears again as good as new as the first breeze of spring hits the garden. It grows to be about four feet tall and it is pretty easy to grow if full sun is provided. The plant can be crossed with other species that are closely related to create cultivars that are more hardy and resistant to deer and drought. 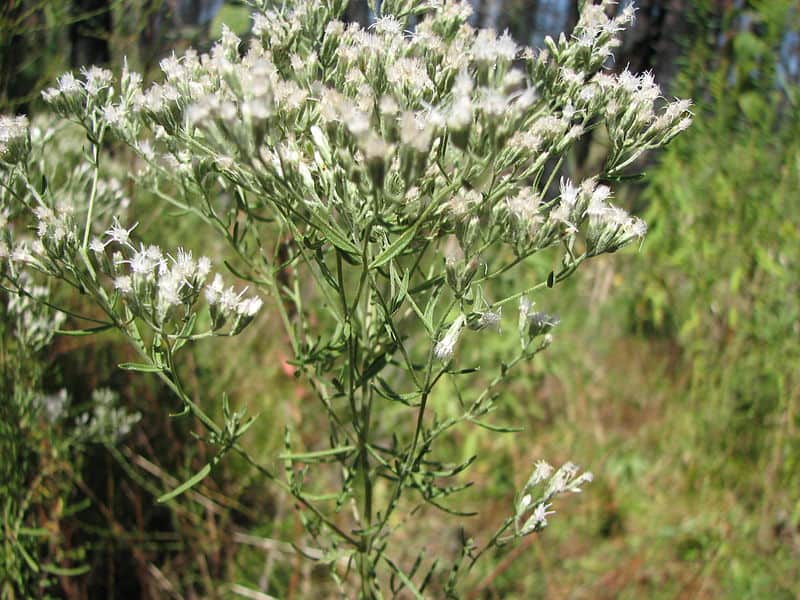 The hyssopleaf thoroughwort flower blooms in the fall. It is naturally occurring in the North American region and has an inflorescence containing many small flower heads, each with five-disk florets.

The plant is shorter than all other varieties of boneset flowers with about one meter maximum height. There are two distinct varieties; one of them is diploid and one haploid. It grows well in moist soil.

It is commonly found in most parts of eastern and south-central US, even as far out as Texas and Florida.

As people get more and more disillusioned with technology, the side-effects of modern medicine become increasingly obvious. This decade, there has been a return to traditional, natural medicine that has fewer repercussions on your health.

If you are willing to invest your trust in the healing properties of the boneset plant, all you have to do is plant it in your garden before waiting for it to bloom. Use them fresh, or dry them up to make into a therapeutic tea while you enjoy the view of your flowerbed! 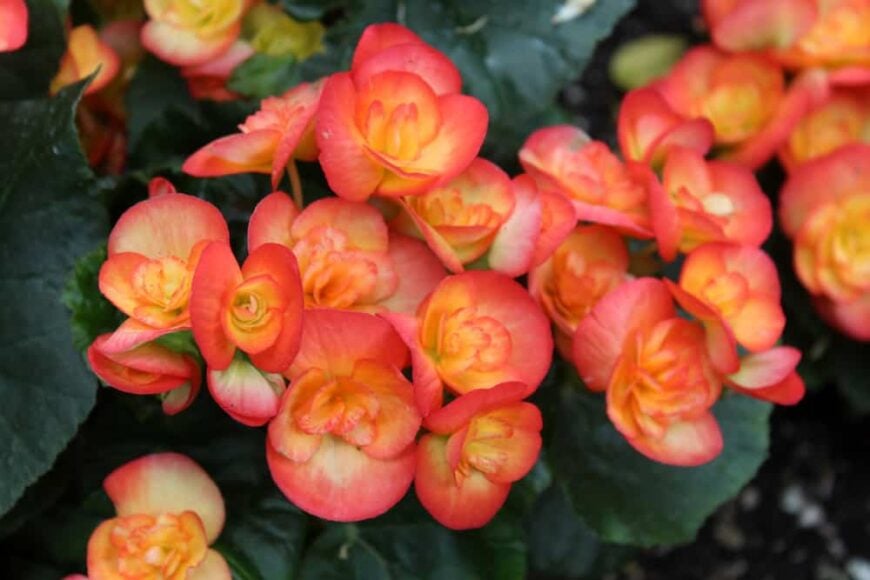 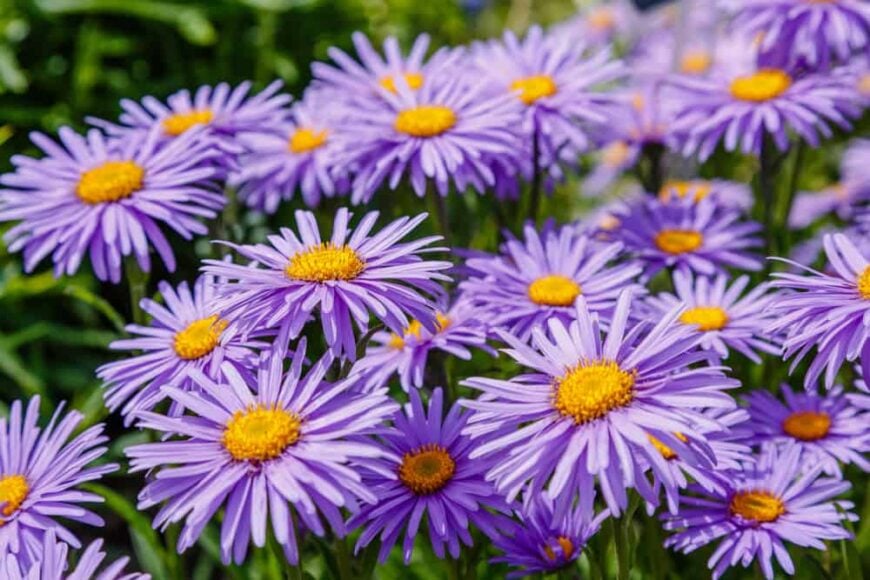 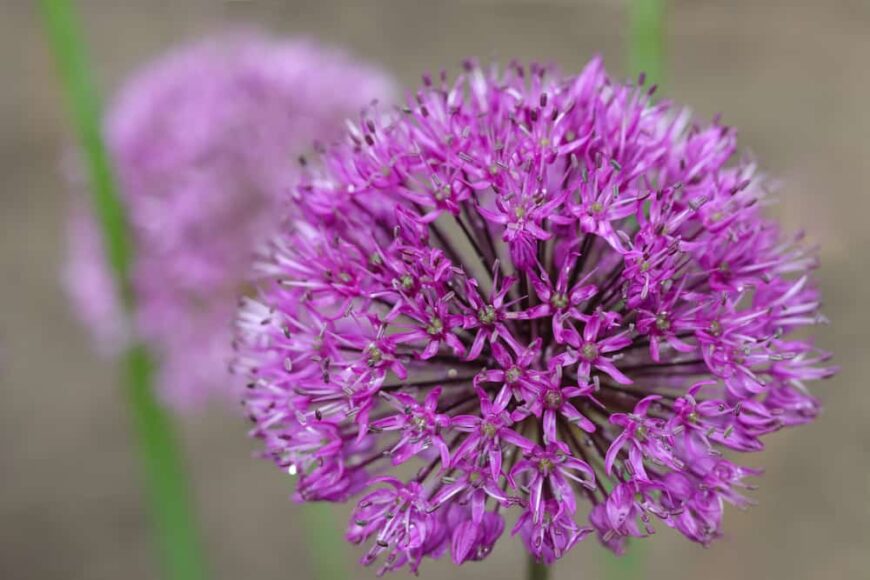 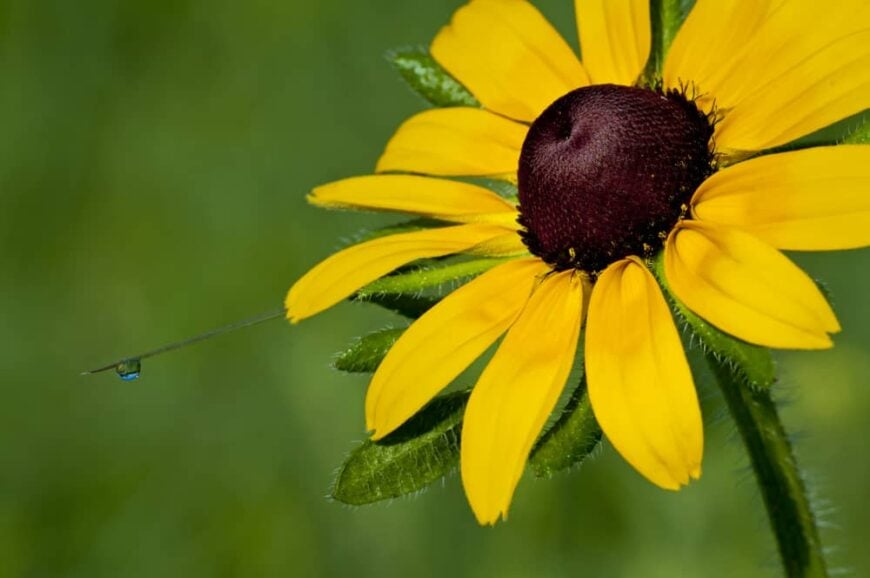