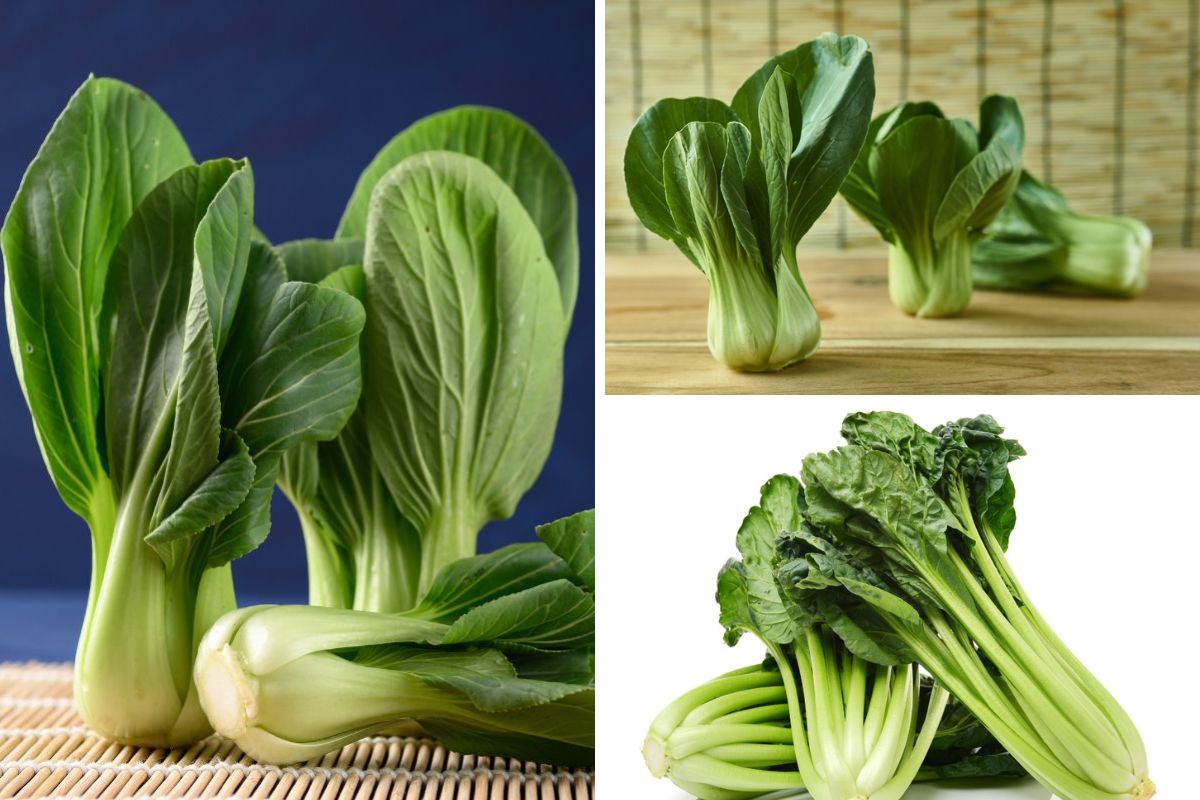 Brassica Rapa Chinensis, also known as bok choy or Chinese cabbage to some, is a species of cabbage with leafy blades and light bulbous white bottoms where the stalks attach.

The base is very watery and carries less of the vegetable’s flavor whereas the leaves have a slightly sweet nutty flavor, with an undertone of black pepper.

Bok choy was initially classified as its own species by Carl Linnaeus, but now is classified as a subspecies of Brassica Rapa, making it a cousin of veggies such as rapini, napa cabbage and turnips.

Bok Choy is being increasingly grown in Western Europe because of its cold hardiness, moving in from its traditional cropping grounds such as Southern China and Southeast Asia. Bok Choy actually originated approximately three and half thousand years ago in the river basin of the Yangtze river.

Jade carvers in the region have long carved sculptures of this vegetable due to its deep green color, and while those sculptures may have made their way down the silk road the plant itself didn’t make it out of China until about the 14th century.

In the 1300s, the plant started getting exported to Korea, where it began to be seriously incorporated into the cuisine, and fermented into kimchi.

In Cantonese bok choy just means “white vegetable”, and we know that the vegetable became widely popularized in Chinese medicine after the famed herbalist Li Shizhen published a chapter on its benefits in his seminal medical compendium, the Bencao Gangmu.

How Nutritious is Bok Choy? 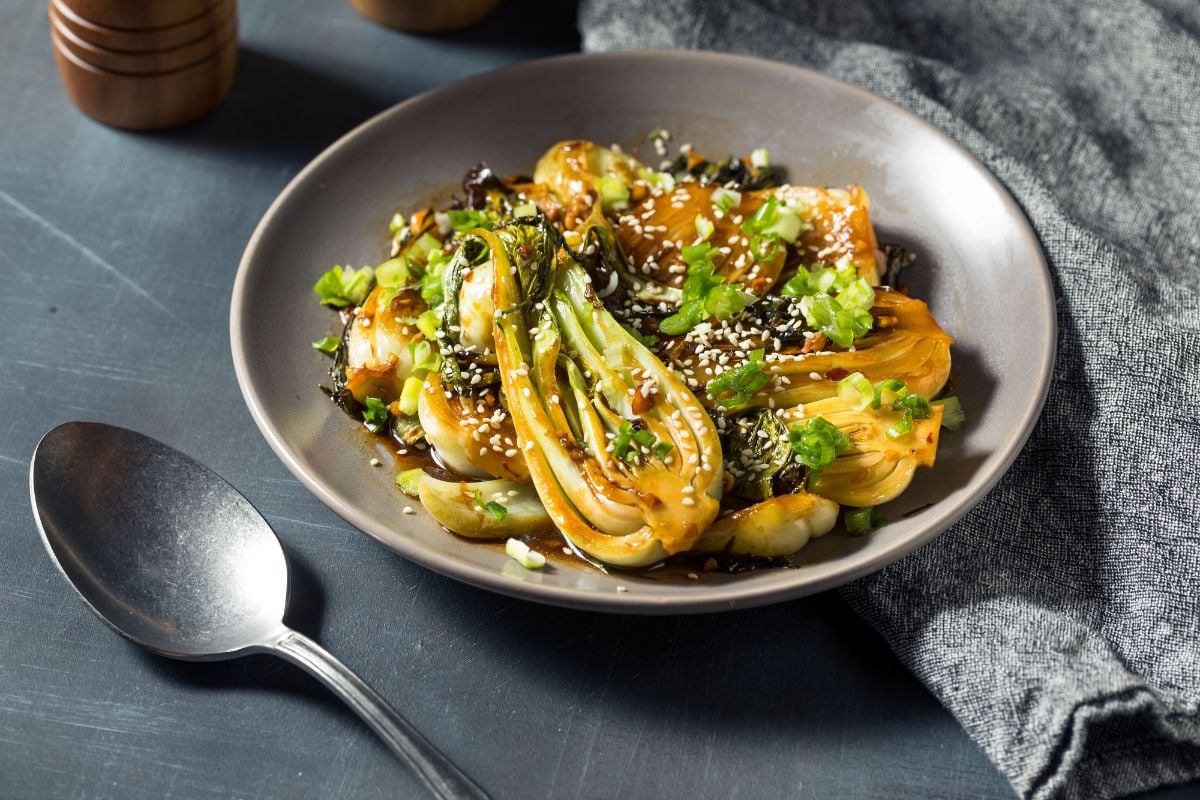 Bok choy is also rich in antioxidants which have been associated with protecting your cells from inflammation causing damage and a number of chronic illnesses.

Cruciferous vegetables like bok choy have also been studied for their anti-cancerous properties, with one such study showing a significantly lower risk of certain types of cancer in people who ate bok choy at least once a week.

While it’s fine to eat bok choy raw in smaller amounts, it’s best not to make it an uncooked go to snack food. This is because the glyco-sinolates found in bok choy can inhibit the proper function of your thyroid by stopping your body from absorbing iodine.

This is a pretty small risk, but there was one documented case of an elderly woman who had been eating an average of 18 cups of raw bok choy a day for an extended period of time.

She was hospitalized after her hypothyroidism induced a coma, however this was after a pretty unique regimen of raw bok choy consumption so don’t worry too much!

What kinds of Bok Choy are there?

Possibly as a result of the fact that bok choy is such a recently ‘developed’ vegetable, there are only really two types of bok choy that you’ll see sold in supermarkets, as well as one other ‘false’ bok choy, although with vegetable classification who’s to say what’s a ‘real’ bok choy and what’s not.

One underappreciated fact about these vegetables is how well they deal with northern temperate climates, so in an effort to get these delicious cabbage cousins into more gardens, I’ll give you some tips for growing them as well! 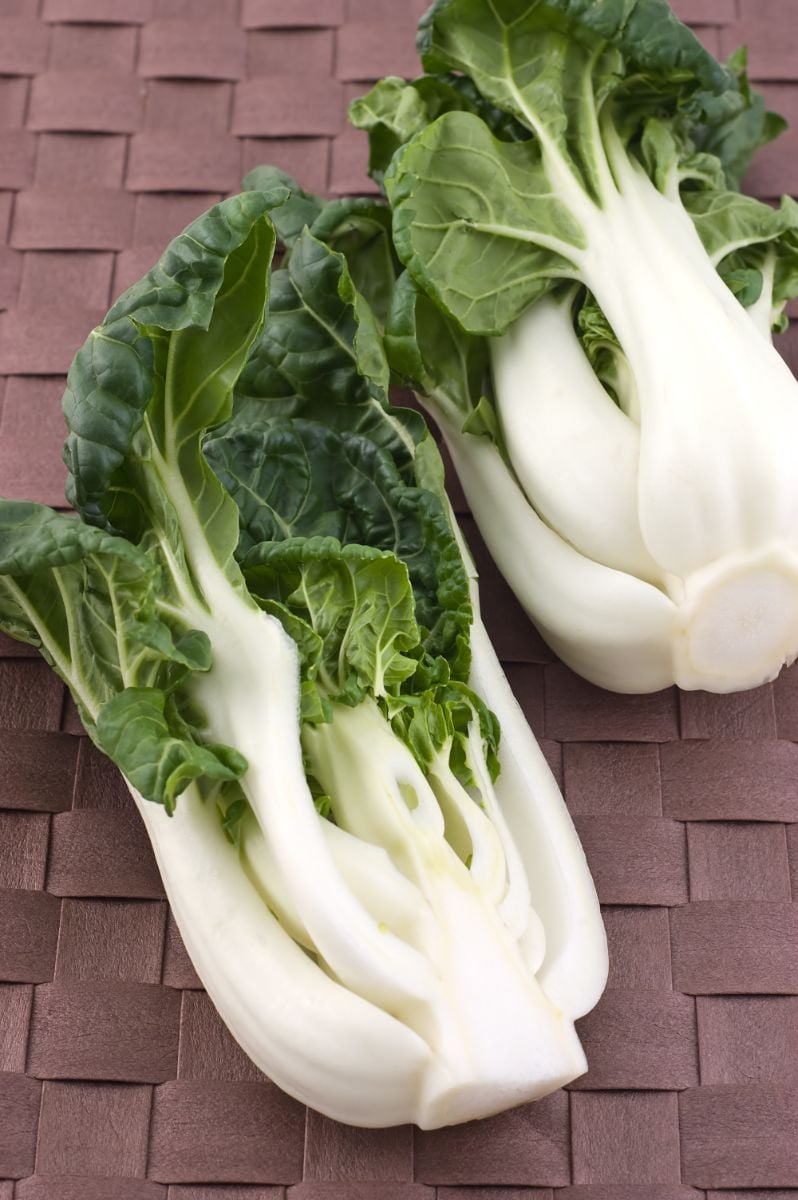 If you’re in Western Europe or North America, ‘regular’ bok 2w2Q1hoy is actually probably the less common of the two main varieties of bok choy. This version of the vegetable has an extremely clean looking bright white stalk with slightly crumpled, dark green leaves at the end.

This variety has a much more mineral, peppery taste that makes it stand out in a stir fry dish or add a little bit of extra kick when used in kimchi.

If you want to grow your own, you can technically start planting whenever the danger of overnight frost has passed, but early season can be a little tricky since young bok choy is quite sensitive, and will bolt (flower) if the weather gets too warm, or if temperatures drop below 10℃.

Because of this, unless you’re in a really even keeled garden, I’d recommend saving your bok choy for late summer. It’s a quick grower so you should have plenty to harvest before it gets too cold. 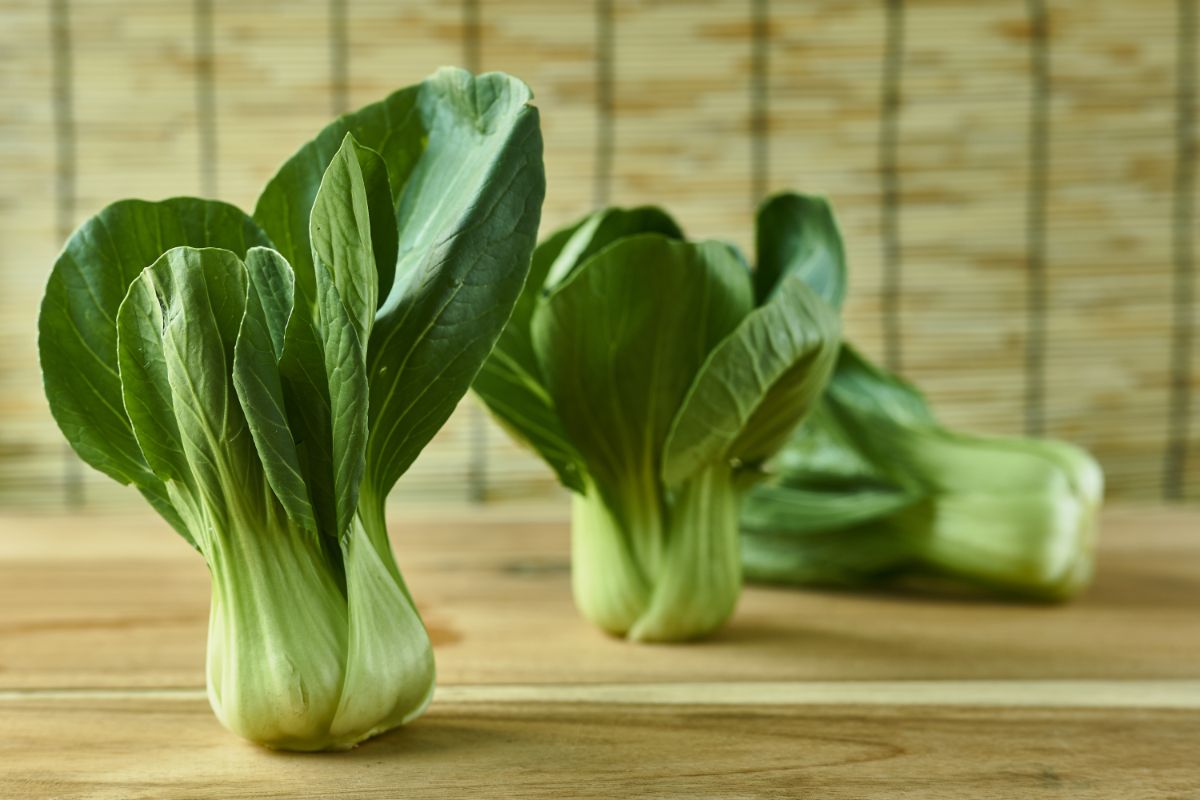 Perhaps slightly more deserving of the ‘regular’ moniker, Shanghai bok choy is much milder in taste. This variety is becoming very popular in grocery stores and can now be found pretty much anywhere vegetables are sold.

Shanghai bok choy has a greener, soup spoon shaped stem, and broader, flat, jade colored leaves. Shanghai bok choy goes just as well in soups and salads as it does in stir fries, and you can even cut a bushel in half and throw it straight onto the grill.

While both varieties of bok choy can be eaten raw, Shanghai bok choy is definitely a little more palatable without cooking. Like ‘regular’ bok choy, you’ll want to plant it in late summer for the easiest growing experience.

Bok choy generally thrives in well drained, fertile soil that can get saturated with rainwater but not soggy with it. Water wise, bok choy thrives with consistent watering, and will bolt if it experiences drought. 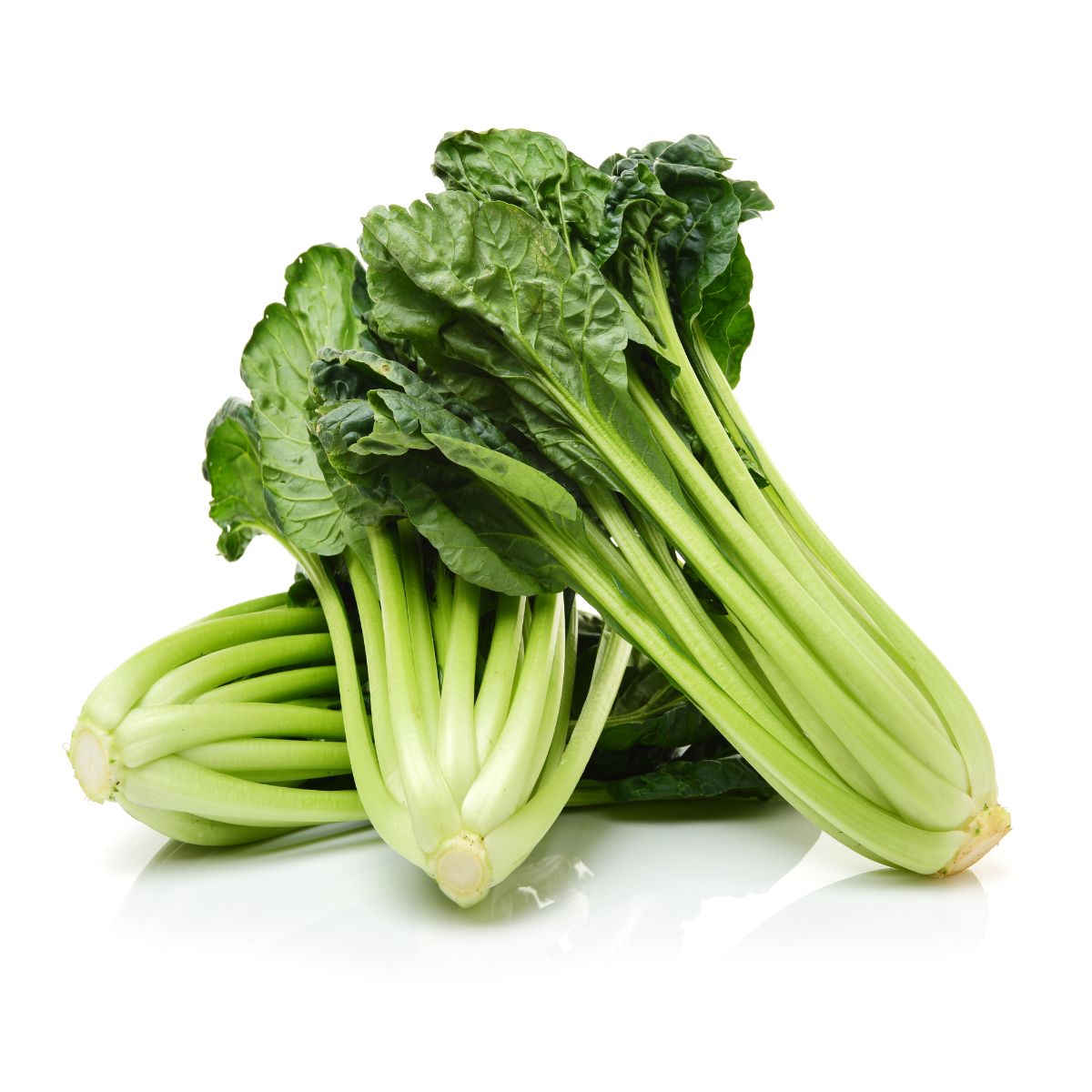 Tatsoi goes by many names, you may have seen it as tat soy, broadbeak mustard, spinach mustard, spoon mustard, or rosette bok choy, and even if you’ve never seen those names in your grocery store, you’re still likely to have tried tatsoi before, since it is commonly used to spice up mixed green salads with its wide, peppery leaves.

Rosette bok choy will thrive and grow under the same conditions as regular and shanghai bok choy. When harvesting bok choy, be sure to leave ⅔ of the plant in the ground, that way you can get consistent production from it throughout the season. 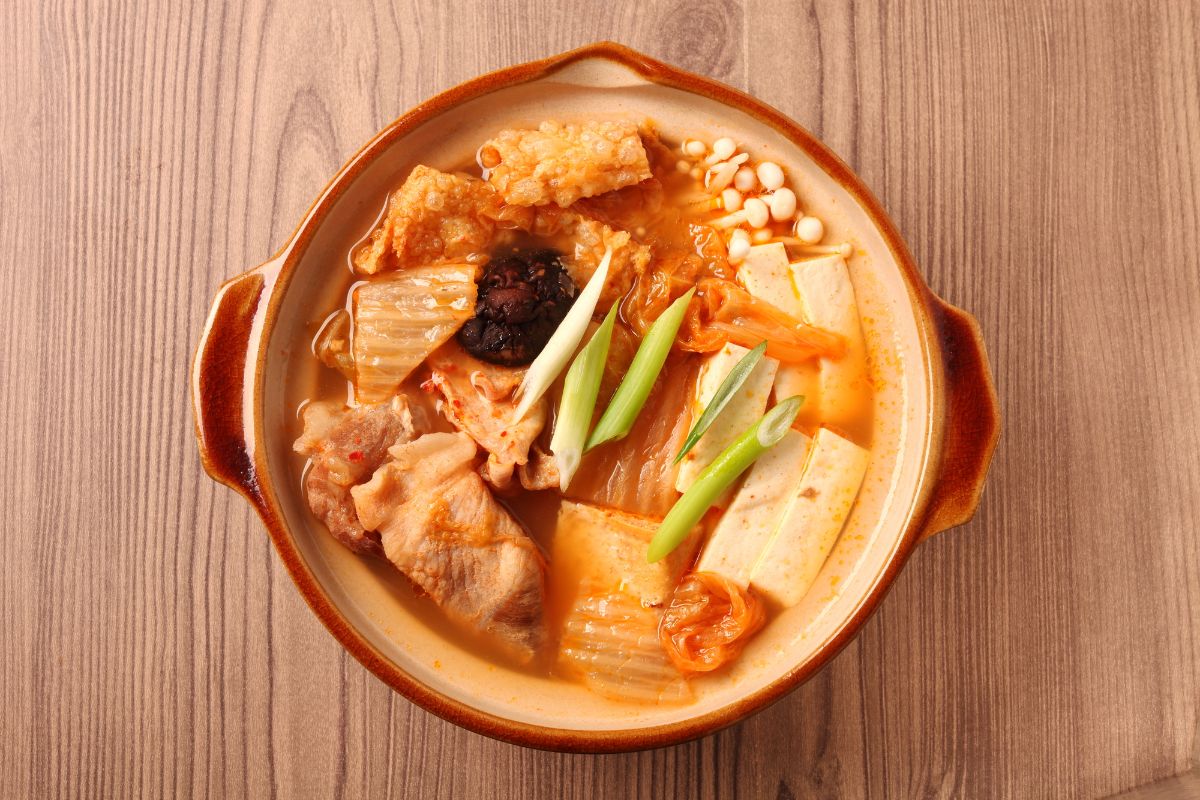 If you want the best results for this dish, I highly recommend going to your local Korean grocer or specialty store and buying the legit Korean ingredients that I describe below.

It’s understandable to think ‘oh the salt I have will be fine’ but trust me, going out on a limb and buying coarse Korean sea salt was a huge game changer for me, and completely leveled up my brining game. Don’t ask me how it all works, I just know what tastes better.

Unlike Kimchi made with napa cabbage, the texture with bok choy is amazingly soft and the stalks deliver an amazing fresh pop.

Bok choy kimchi definitely won’t last as long as other types though so be sure to eat this within 3 or 4 weeks of fermenting at the latest, and err on the side of smaller batches unless you’re making it for a large group.

Who am I kidding though, there’s always someone to give your extra veggies to!

To start, you’ll want to inspect all your bok choy and look for bruising and remove it with a knife. Don’t make the mistake of peeling the stalks off the main stem, we need it all in one piece for best results. Instead, to make it smaller, we’ll cut lengthwise twice (so quarters).

Once quartered, be sure to wash it thoroughly, then immerse it in the brine mixture. You’ll want to set a timer, because brine time is really important. We’ll be leaving our quartered bok choy in the brine solution for 35 minutes.

While the bok choy is soaking up all that good sea salt, we’ll prepare the seasoning. Nothing too complicated, just take all the ingredients listed under the seasoning ingredients and throw them in a mixing bowl until you have a thick red paste.

Once your 35 minutes is up, grab the bok choy out of the brine, but don’t dump out the brine yet, we’ll want to save a little to add to our final mix. Gently rinse the bok choy off in cold water, and then give it a light flicking motion to drain the excess water out of the stalks.

It doesn’t need to be bone dry or anything, don’t worry. Just get it from soaked to damp, then add it to the mixture, with 3 teaspoons of the reserved brine and the chopped green onion and shallot. Mix it all up gently with your hands (wear latex gloves for your own sake), until the bok choy is well saturated.

Add it to an airtight container (I like to use glass jars with a flick top seal), and leave it out at room temperature for twenty four hours to let it ferment.

After a day has passed, open up the lid to let some of the pressure off and then store in the fridge and enjoy! You can experiment with this by adding sliced apple for a little sweetness or different bok choy. The world is your oyster! 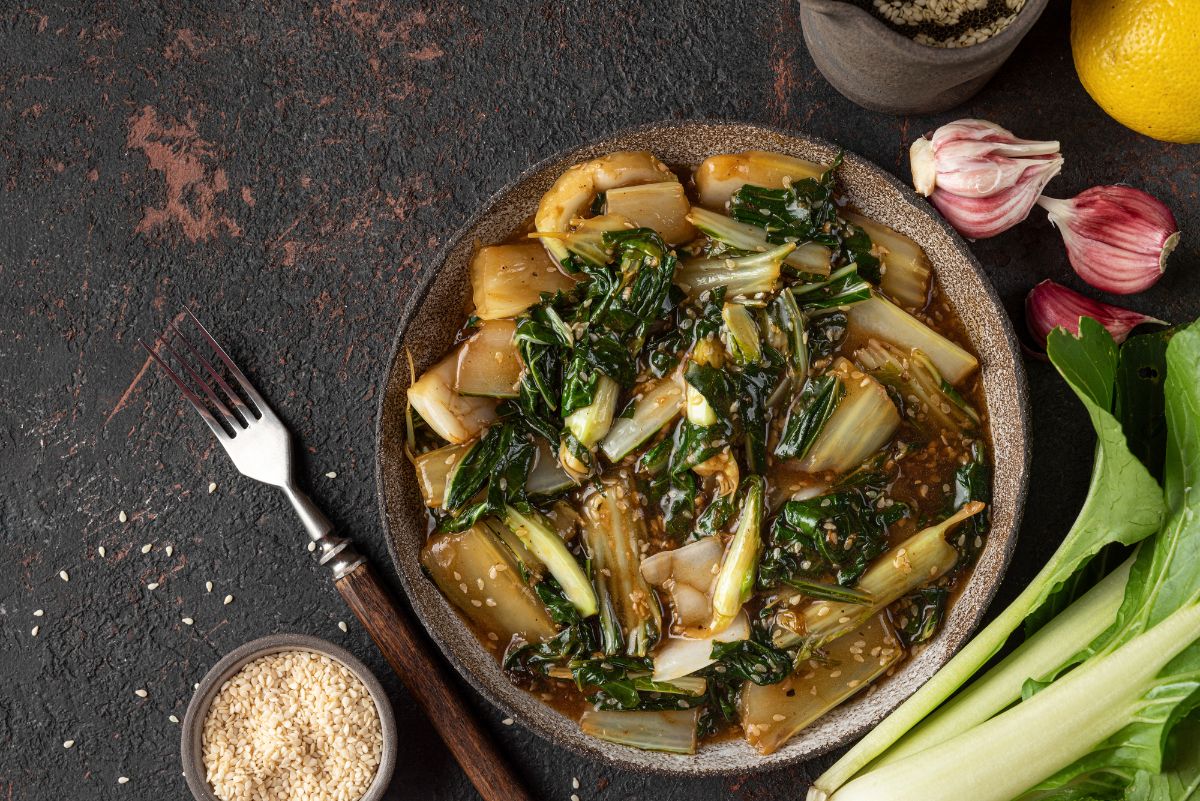 Ok, I recognize that kimchi isn’t for everyone though. So if you’re not interested in the fermented goodness described above, don’t give up on bok choy! Try whipping up this easy side for dinner instead.

For this dish, you’ll need:

Add your oil to a cast iron pan and let it get nice and hot before you chuck in the garlic and chopped shallots. Keep stirring them for a minute or two as they cook down and get the oil nice and flavorful, you’ll know it’s ready once it gets fragrant.

Add in the bok choy and let it cook down for 30 seconds before you add the soy sauce and mirin. Let it cook for another 3 minutes (my favorite doneness level) or to whatever you consider optimal and then take it off the heat.

Serve it up with a little crushed red pepper for a little extra kick if you so desire!