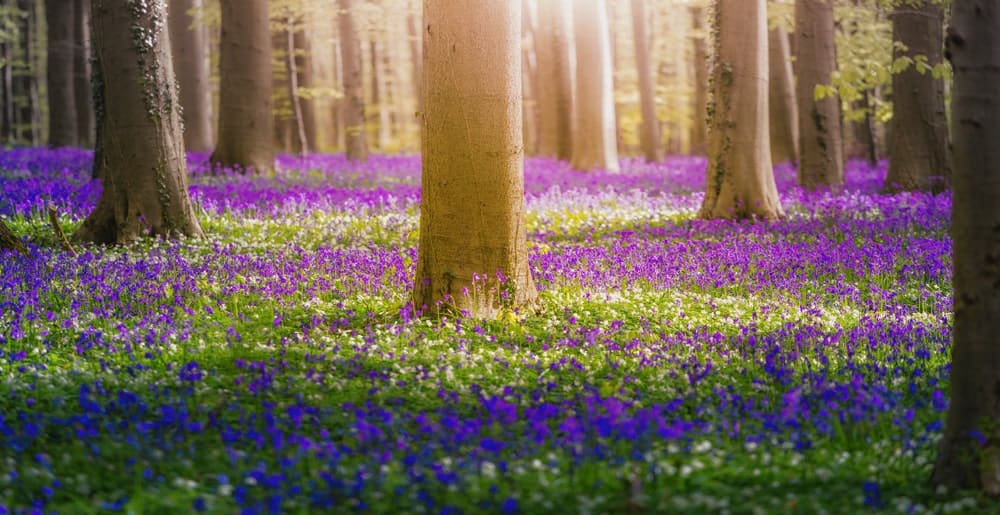 Bluebells are some of the most commonly found and grown flowers in carpeting woodlands, beautiful gardens, meadows, glens and even along pathways.

They are favorites amongst both sides of the Atlantic and typically grow in North America and reaching out to North Africa. You will also often find striking colored blue bells tucked away cozily deep inside various forests.

Bluebell is a perennial plant which is a spring ephemeral and belongs to the family of lilies. They are also referred to as spring bulbous flowers that put up a breathtaking display, whether grown in a mass or alone.

Bluebells are known to gloriously bloom and burst during the spring season, generally between April and May.

Whenever you see bright bluish-purple bluebells swinging along the air, it is an indication that warm weather is soon to knock your doors because that’s what these flowers bring with them.

True to their name, bluebells are actually shaped like captivating bells and sport a stunning sky blue color that is surely going to catch your eye and your breath every single time.

These perennial bulbs are one of the most popular options used for creating mesmerizing bluebell carpets in the woodlands during springtime.

With their bell-shaped bulbs and dainty, arching stems, bluebells simply add life and ethereal beauty to any landscape where they are grown.

The bells usually sport the traditional blue color and often times; the blue is adorned by hues of gorgeous purple. They add a splash of glamour, color and grace to any yard or garden, and simple rejuvenates them.

Bluebells are also people’s favorite due to their soft and fresh fragrance that just fills the air and also gently reawakens your senses. You can possibly smell them from afar because they simple saturate the air around them with their incredible scent.

The Symbolism behind Bluebells 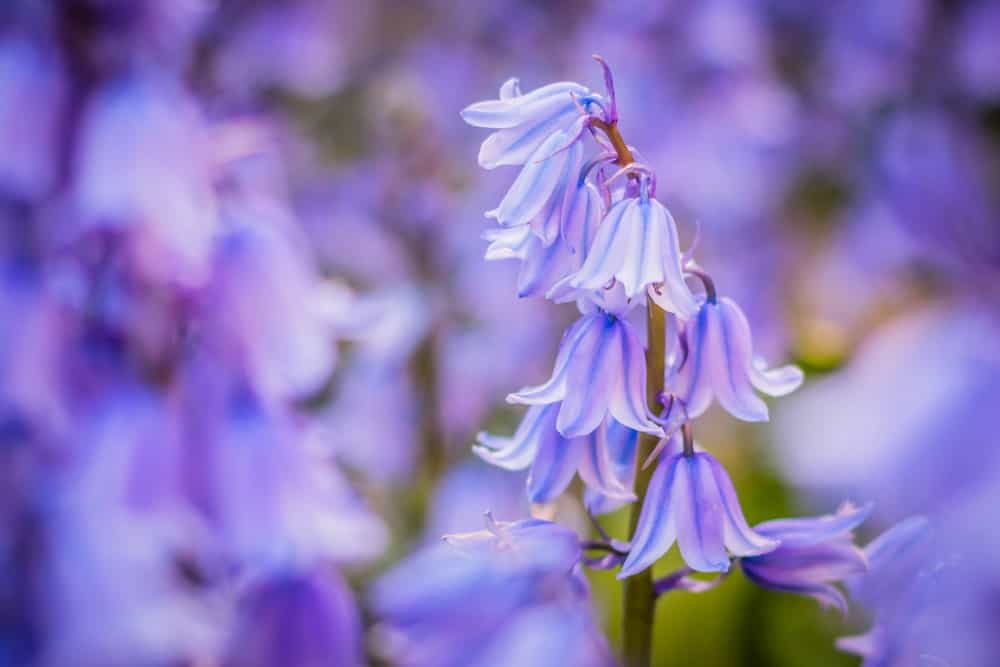 This flower is believed to symbolize humility, and often times, gratitude, as well. They may also be used to show everlasting and constant love and affection.

An interesting interpretation of the meaning of bluebells stemmed from the Victorian era where flowers were the most commonly sought mediums to express feelings and thoughts to another person.

So, they best represented humility because of the way that the bell shape of these flowers seems to bow down on the flower spike. 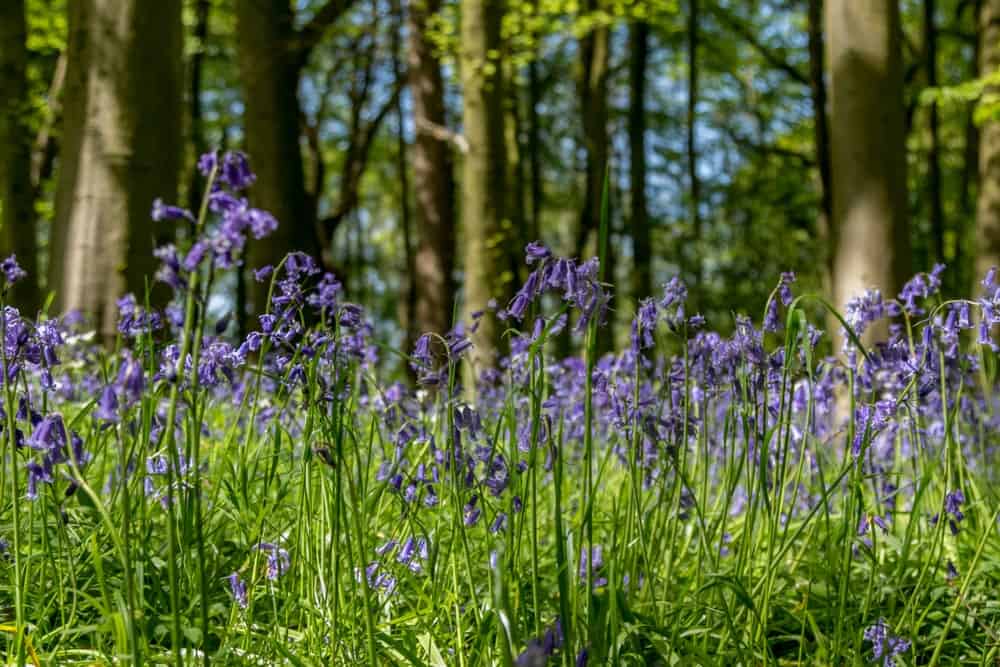 As beautiful and breathtaking these flowers are, they are equally believed to be magical and have superstitions attached to them.

Bluebells are supposedly a tool for calling out fairies, which you can do by ‘ringing’ the bells of these flowers just like you would ring a normal bell.

However, on the downside, a superstitious belief associated with bluebells says that if anyone hears the ringing of a bluebell, someone very close or special to them will die.

Strangely though, no one has ever heard a bluebell ‘ring’ nor does anyone know what sound these flowers could make.

During the medieval era, a field or garden of striking, lush bluebells was often used to scare and terrify people.

Most of them would stay away from a field of bluebells because they believed that walking amid bluebells can result in a person being spellbound by magic.

Not only that but it was also said that picking bluebells and bringing them inside your home is equal to inviting misfortune and bad luck into your lives.

This belief stemmed from famous folklore which said that the fairies who live and hide among bluebells had cast a bad-luck spell on these flowers.

So, anyone who so much so dares to even pick this precious flower will encounter great misfortune in their life.

Safe to say, despite these overriding myths and beliefs associated with bluebells, these flowers are one of the common and popular choices of flowers you will see in the majority of gardens and meadows across the globe.

Below are some of the most widely known types of bluebells with their characteristics and other interesting features.

Below you will find common bluebell flower names and pictures. 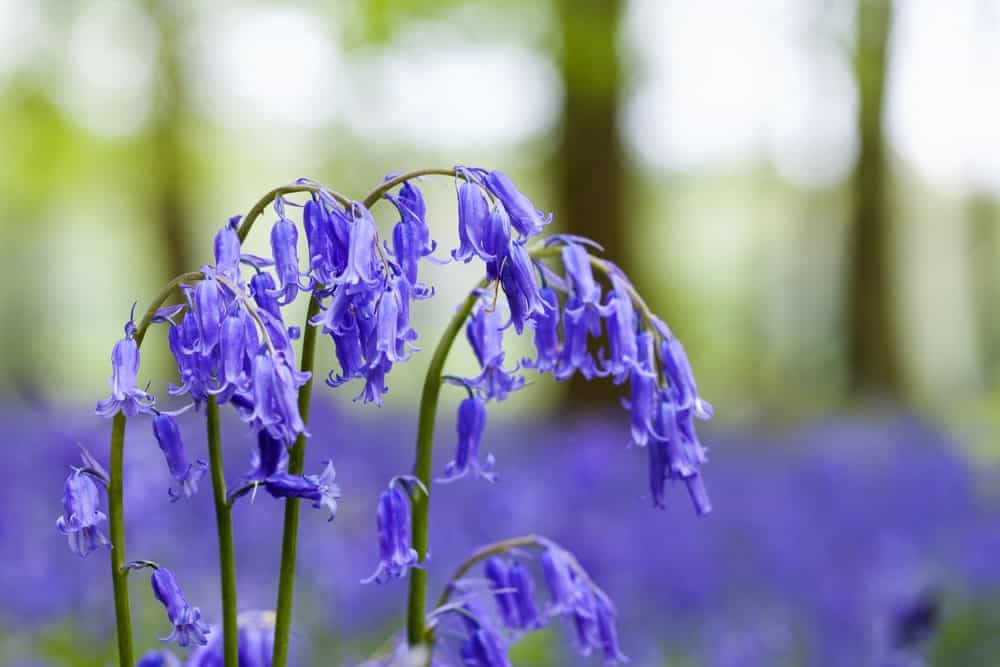 These are also called ‘British bluebells and are native to England and France. These breathtaking purple-bluish flowers have been gracing and beautifying wooded areas and gardens as early as the 1500s.

It is a gorgeous deep-blue flower that grows to an average height of 12 inches and consists of a straight-sided long bell with curled up petals towards the end.

This flower grows in great abundance in the woodlands, particularly in the spring season. So it is best to plant them during the fall so that they bloom and burst with color just as the spring season kicks in.

English bluebells have a wonderfully soft and fresh fragrance that fills in and saturates the air as soon as it comes into contact with it.

Interestingly, Emile Brontë, an English poet, and novelist believed that English Bluebells were her “fairy flowers” and she also had the last word on them. She wrote, “A fine and subtle spirit dwells in every little flower.”

A fascinating fact about these flowers is that they are usually all on the same side of the stalk, but then after some time, all the flowers cave in and bend to form a delicate curve.

English Bluebell is best for spring woodlands when the weather warms up and the days start to get even longer, and these fragrant flowers bring back memories of springtime.

They are ideally grown in moist and well-drained soils that contain rich organic matter. 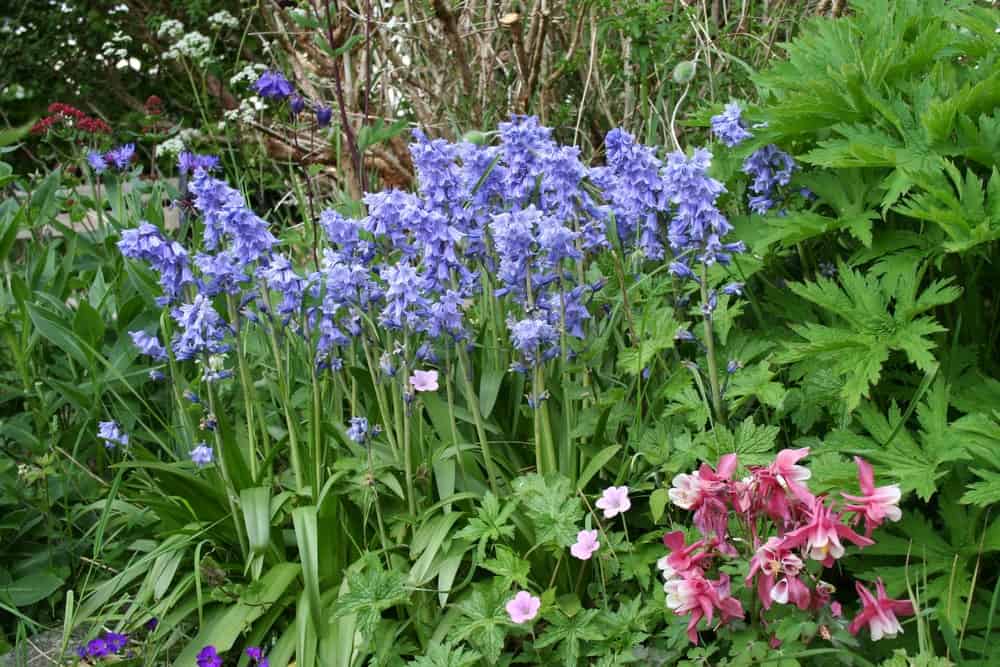 Known as a late-blooming spring bulb, the Spanish Bluebell is native to the Iberian Peninsula and is quite similar to the English Bluebell in various ways. These flowers are rarely found in woodlands because they tend to bloom in open areas.

The stems of the Spanish bluebell grow up to 3 feet tall, and the flowers grow in a cluster form that point towards the sky on every single stem.

Unlike English bluebells, these have straight stalks and do not curve in towards the end, but are straight and pointed instead. They grow in a variety of beautiful colors including pink, blue and white.

Spanish bluebell was first introduced in the United Kingdom after which a hybrid version of these flowers and the common bluebells became really popular and was first regarded as invasive.

This flower is usually cultivated as a garden plant and is typically referred to as a spring bulb plant.

It is indeed fascinating to know that unlike the English bluebells that grow on the same side of the stalk, the Spanish bluebells grow on multiple sides with the flowers emerging from everywhere on the stalk.

An important thing to take care of when growing these flowers is that they grow well in partial shade or sunlight, so it is best to grow them under full sun in the North with partial shade coming from the South. 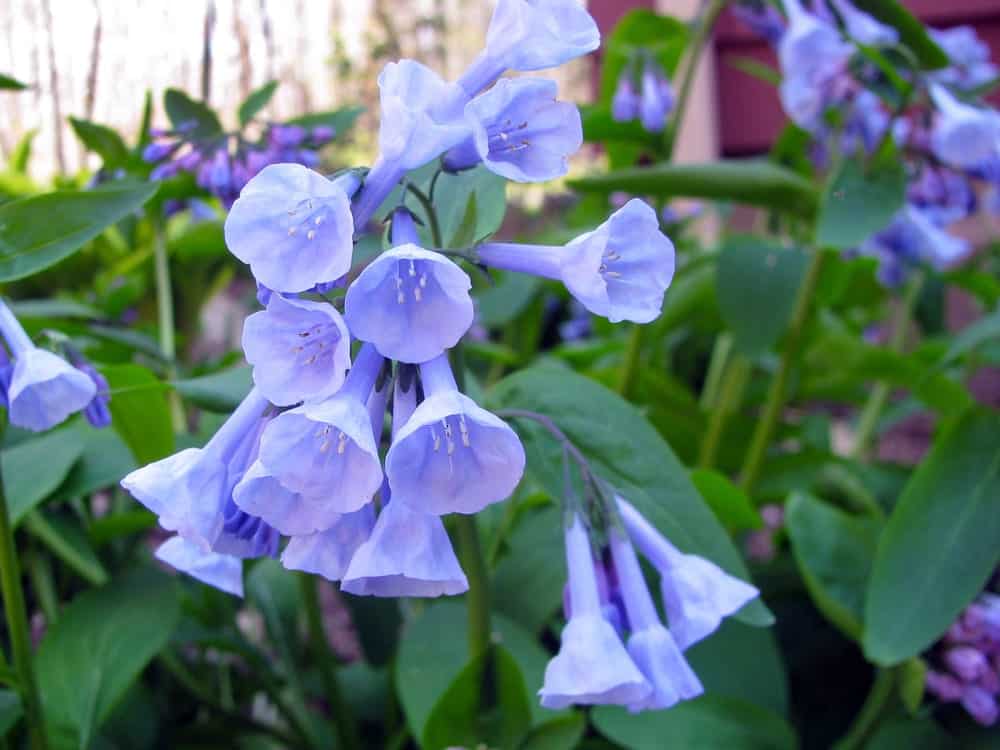 This is an ephemeral plant of the spring that is native to Eastern North America and has bell-shaped sky blue flowers with gray-green rounded leaves.

They belong to the Boraginaceae family, which means they are related to other similar species such as the Comfrey and the Forget-Me-Not.

They are also believed to be some of the prettiest spring flowers to grow in ones garden due to their gorgeous light blue purple color.

In actuality, in the initial stages when the bluebells are in their bud form, they sport a pretty pink color and soon bloom into a darker and a richer hue.

Virginia bluebells grow to an average height of 18-24 inches tall and ideally bloom in early to mid spring.

They continue blooming and bursting with striking colors all the way through early to mid summer, given that the growing conditions are just perfect. 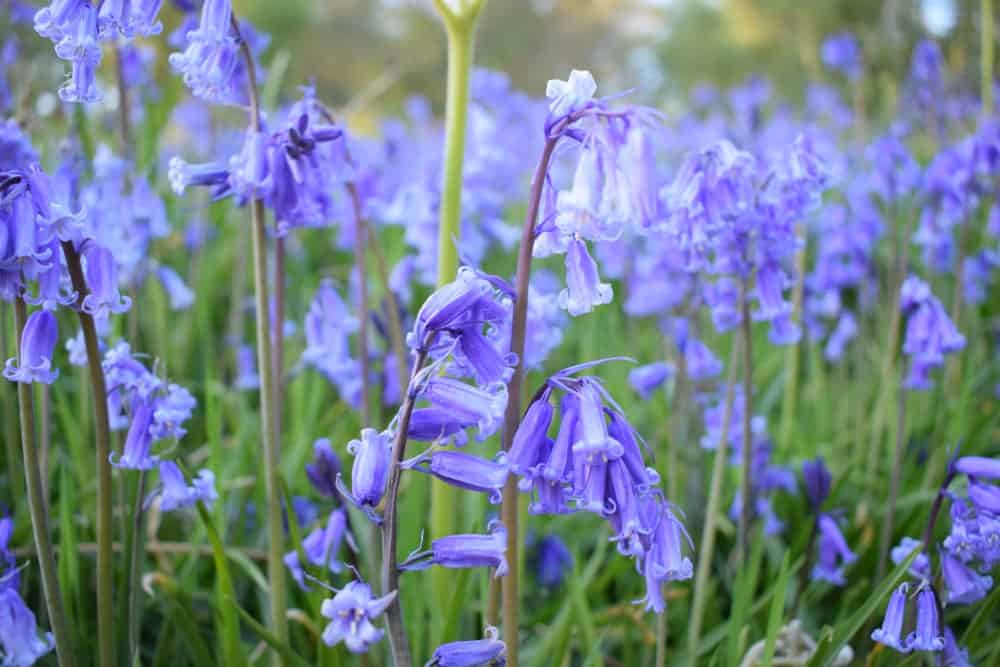 This variety of bluebells is also known as ‘harebells’, a name that has its roots well placed in magic.

It basically stemmed from the fact that Scottish Bluebells commonly grows in those meadows that are surrounded by hares. The name has quite a few fascinating theories attached to it.

An interesting theory states that the flower is called ‘harebells’ because witches in ancient times used to turn themselves into hares and the hide among these flowers.

Another name for Scottish bluebells is “Fairies’ Thimbles” which is not very commonly used but interestingly, the flower was given this name because it is believed that fairies live among these flowers.

Scottish bluebells are primarily distributed in the Northern Hemisphere from where they make their way to Europe from the North Mediterranean. 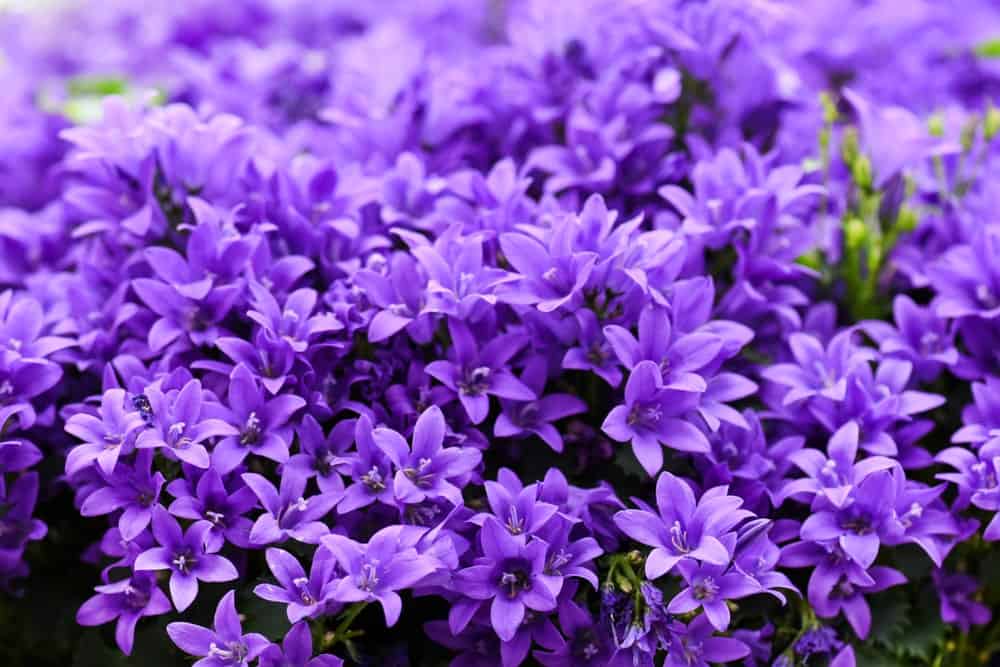 The name “Campanula” is Latin for “little bell” and is a highly diverse genus with over 500 species that are distributed across subtropical regions of the Northern Hemisphere and further extending to mountains of Africa and Asia.

Some of these species include perennial, annual and biennial plants that consist of varying growing habits from 6 feet tall species growing in woodlands to alpine and arctic species that grow to an average of 2 cm high.

Campanula bluebells are most notable for their shape that can sport different forms similar to a bell, star, tubular, or cup and saucer shaped.

They are quite often chosen for rock gardens and even cottage gardens where the beautiful flowers seem to grow into a gorgeous flower bed or striking borders.

The best thing about Campanula flowers is that they are winter hardy, easy to grow and are complete ground-covering plants.

So, if your poor landscape gets taken over by the harsh winter breeze and you wish to bring it to life, you know what to do.

Grow a blanket of Campanulas that won’t just beautifully bloom during wintertime but will also burst into a myriad of colors including pink, white and purplish-blue. 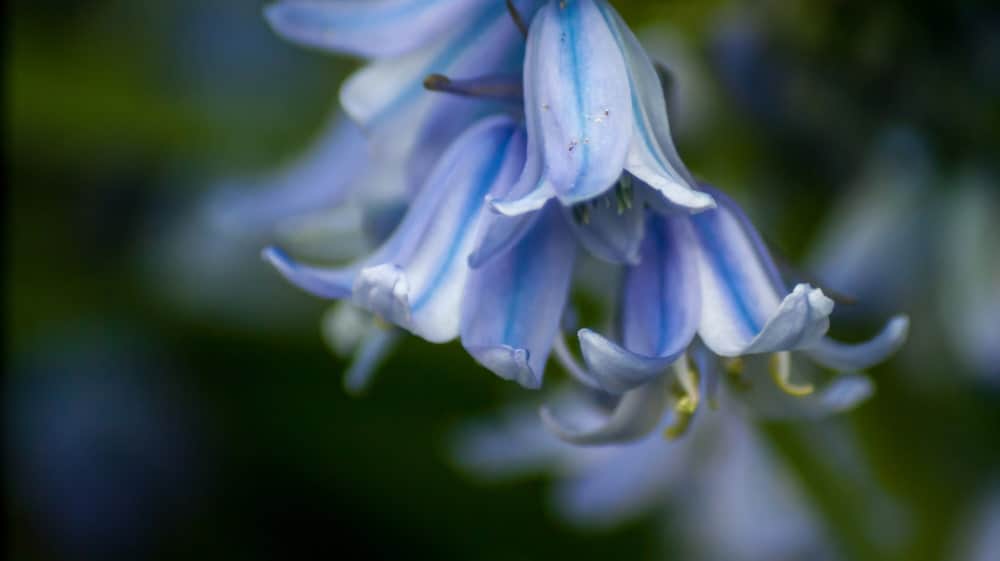 This is a hybrid species of bluebells that is a cross between the common bluebell and the Spanish bluebell. These are two parental species that make the hybrid bluebell cross.

Hybrid bluebells were first given this particular name back in 1997 by the Belgian botanist D. Geerinck.

One way to identify hybrid bluebells among other varieties of bluebells is from their shape, scent and size.

The hybrid species contain more of the Spanish bluebell characteristics like broader leaves, very light and subtle amount of fragrance and drooping flowers all over the stem instead of a single side.

The petals of this flower are smaller in size with tips that roll back to a certain degree. Also, the stem is usually upright and stiff but in some cases, it tends to drop down a little.

The leaves of the hybrid flowers have intermediate characteristics of both the Spanish bluebell and the native or common bluebell, resulting in much broader leaves with pointed tips.

Bluebells are indeed an excellent choice for your meadows and garden for they will truly add great color, vibrancy and birth new life to the surrounding area!

Return to all flowers