Black Currants are one of the most nutritious berries. It's common in Europe. This article discusses varieties of black currants and how to cultivate them. 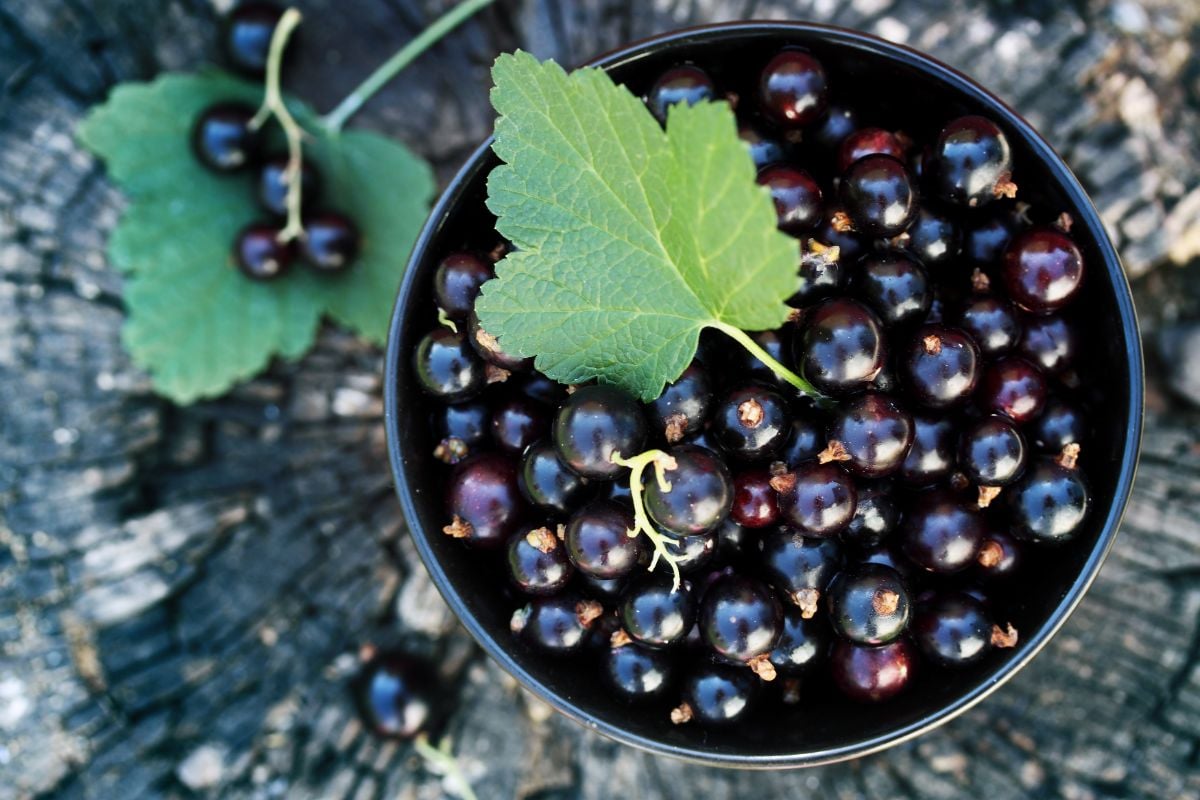 Black currants (also known as blackcurrants) are far more common in Europe than in the United States.  In fact, for most of the 20th century, black currants were banned in the U.S. because they were a vector of white pine blister rust.  In the 1960s, authority over the ban was shifted from the federal government to the states.  Since then, several states have permitted the cultivation of black currants. Although still relatively unknown in America, blackcurrants are increasingly popular in the U.S. due to their flavor, antioxidant and vitamin content, and high fiber.

Most breeding of black currants is centered in the British Isles, Scandinavia and the Baltic States, and Poland and Ukraine.  Modern breeding efforts focus on flavor and disease resistance.  More recent breeding efforts have focused on increasing the concentration of antioxidants and bioactive compounds, Vitamin A and C, and large amounts of calcium, iron, magnesium, and potassium.  Black currants are one of the most nutritious of all berries. 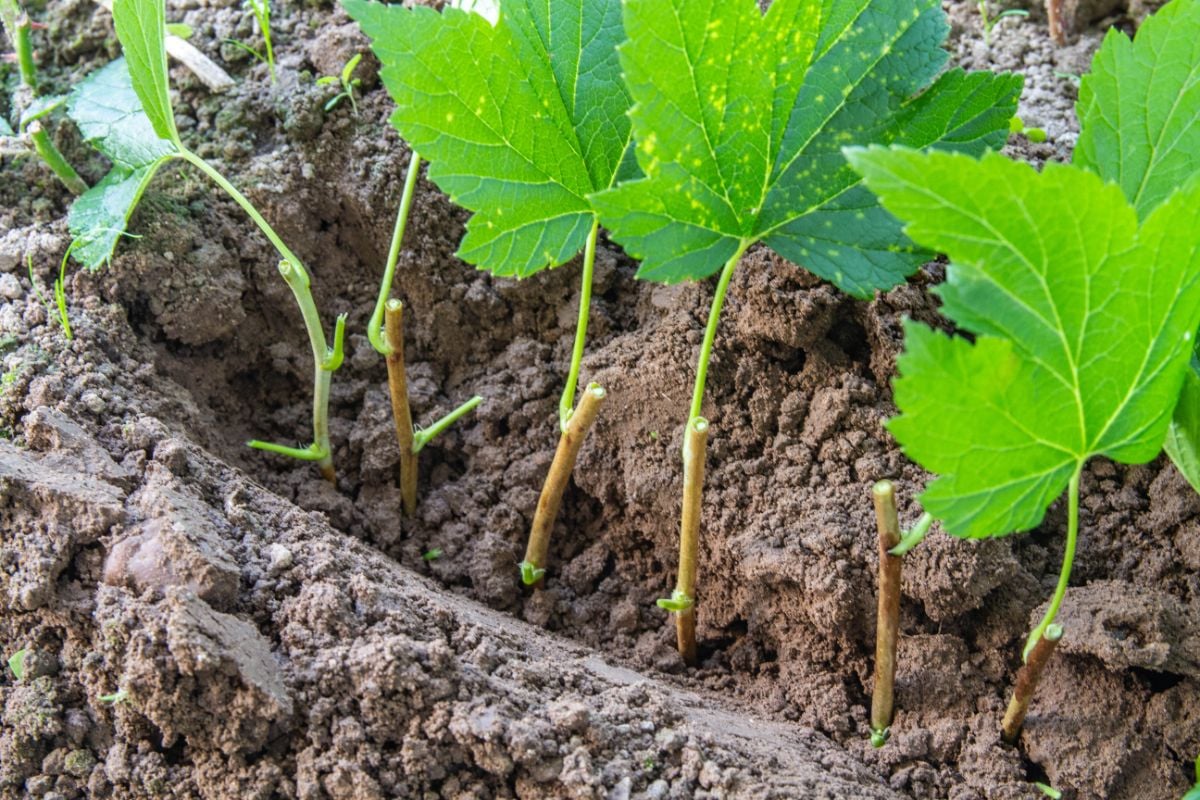 Black currants do not need full sunlight, being happy in morning sun and afternoon shade locations.  They can also grow in full shade but will produce less fruit in such areas.  Be sure to avoid any known frost pockets on your property to protect them from late spring cold.

Black currants are best planted in the spring.  They tolerate the cold reasonably well, so they can even be planted before the final frosts of spring.  As existing plants start to recover from winter’s dormancy, the time to plant the currants has arrived.  On the other hand, if you are planting bare-root plants, fall is the better time to plant.

Be sure to allow plenty of space for each plant, keeping three feet between the plants and the rows.  You need a hole slightly deeper than the nursery planter holding the plant.  Put the root ball into the solid, burying it just deeper than it grew in the pot.  Cover some of the stems with soil to help establish the plant.  Water heavily and mulch around the base to keep the soil moist and cool.  The bare-root plants should be planted in the fall with only light watering.

Black currants are easy to care for, requiring just water, some pruning, and occasional plant food.  The plants take heavy watering in the productive season from June to September; don’t be afraid to create a puddle under the plant.

Fertilize with one inch of composted manure in the fall.  If plants seem to be growing slowly, then feed again in spring and keep feeding throughout the year.  Always keep the plants mulched to maintain the proper soil temperature and moisture.  Annual pruning of branches more than two years old will keep production highest. 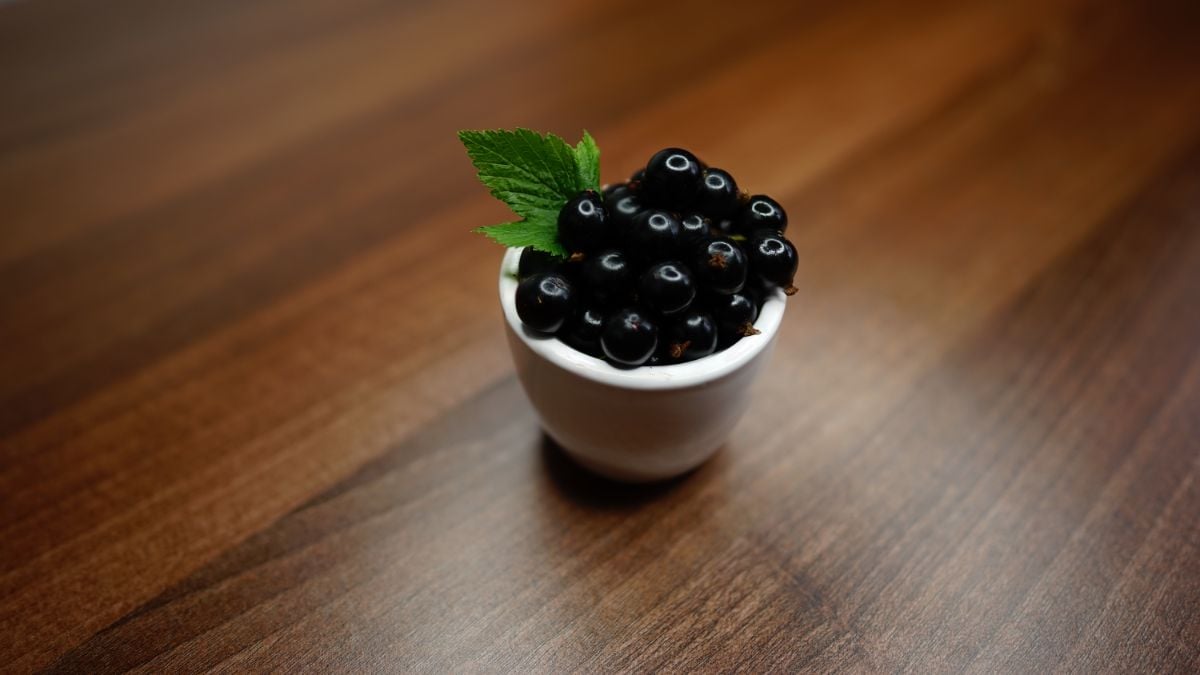 Out of all cultivated black currant varieties, ‘Ben Connan black currants are the heaviest producing, with up to 7 pounds of berries from each plant. The berries are highly flavored and excellent for all cooking and canning uses.  The plants are compact, so this type works well for containers.

The berries are larger than average, and the plant has excellent disease resistance to mildew and leaf-curling midge. The weight of the fruit may call for support of the branches near harvest. The plants are fully productive after only three years and may produce for up to 12. 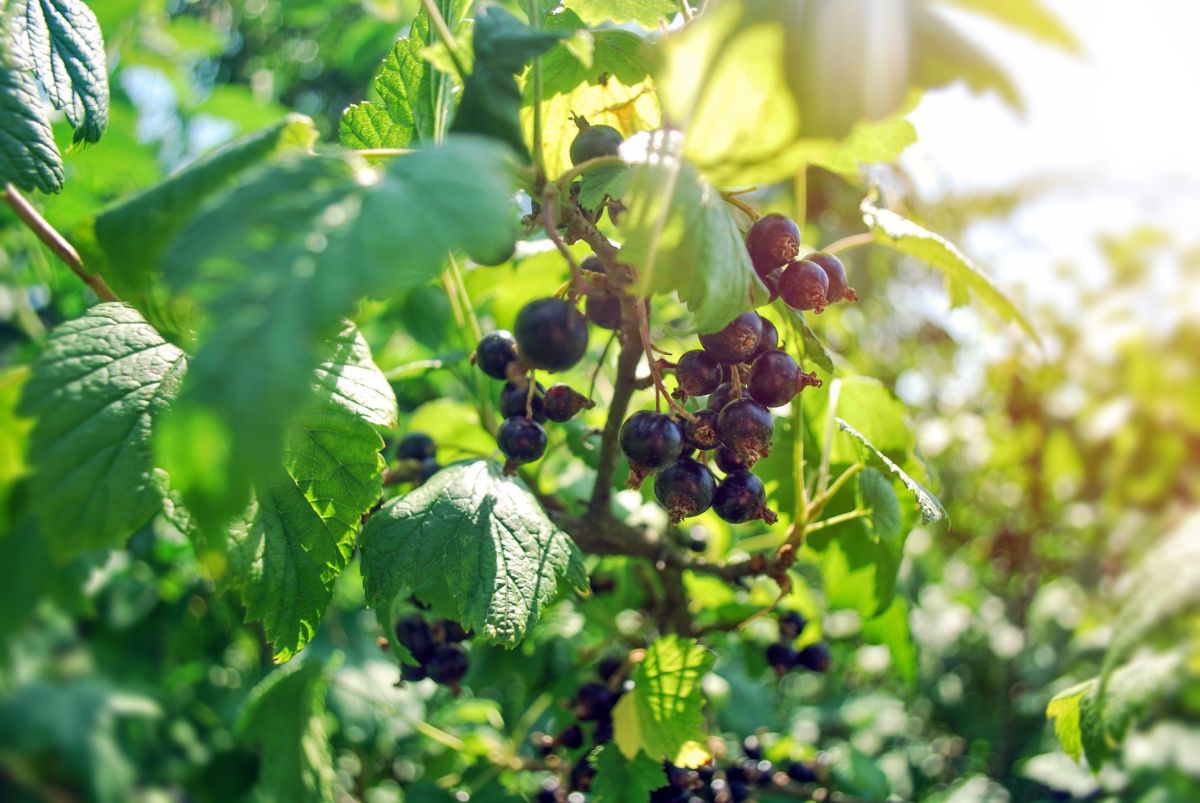 The Ben Hope is the most commonly grown blackcurrant variety for British gardeners for very good reasons. First released for sale in 1988, the Ben Hope has top-class resistance to big bud mites (gall mites), affecting many other types. The resistance comes from the berry being a cross between several other blackcurrants and a gooseberry.

The Ben Hope thrives and outgrows even the occasional pest or disease. It tolerates a large variety of growing conditions. If you keep the roots of this variety well mulched, you will have an excellent plant. The bushes grow larger than average, to a height and spread of about six feet, so they need more space compared to other varieties. The plant is an upright grower, making picking the berries a pleasure.

The Ben Hope is also resistant to mildew and leaf spots as far as pests and diseases go. This makes it an ideal choice for those who want to grow organic fruits.  The fruits are medium-sized, and the yields are on the high side.  The Ben Hope’s flavor is highly rated for pies, jams, and other uses. 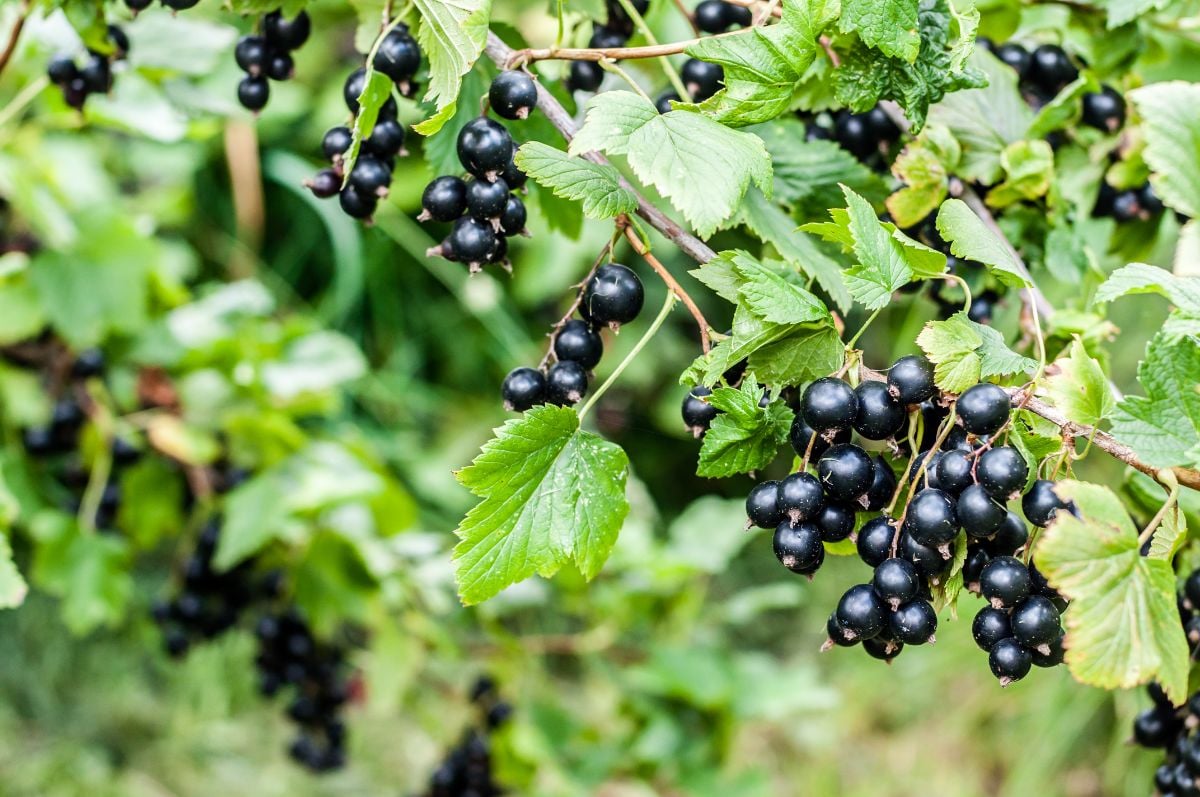 The Ben Lomond was the first of the Ben varieties to be introduced in the United Kingdom. Its key benefit is that it blooms relatively late in the spring, reducing the danger of late frosts. It also does well in cooler areas, benefiting from a hard winter.

When first introduced, the Ben Lomond had good resistance to mildew; however, this resistance has been significantly reduced in recent years. Good pruning helps to reduce the risk of mildew.

The fully grown bush (after four or five years) will be about four and a half feet tall, compact, and well-formed. The large and firm fruit is very high in vitamin C with a top-quality flavor for pies and juices. The high-yielding fruit lasts longer than most when left on the bush.

To reduce the risk of mildew, prune annually and keep the bush’s center open to allow good air circulation.

Great for amateur gardeners, the Ben Sarek has huge berries, sweeter than most. However, the large berries can sometimes be a problem because they can weigh down the branches, which might need some support to prevent breakage. The Ben Sarek blooms late in the year, though not as late as the Ben Lomond, making it unlikely to be harmed by late frosts. It grows well in cooler climates.

This is a low-growing variety that will hardly ever exceed four feet in height. The Ben Sarek has some resistance to mildew, low disease resistance, and uneven ripening. 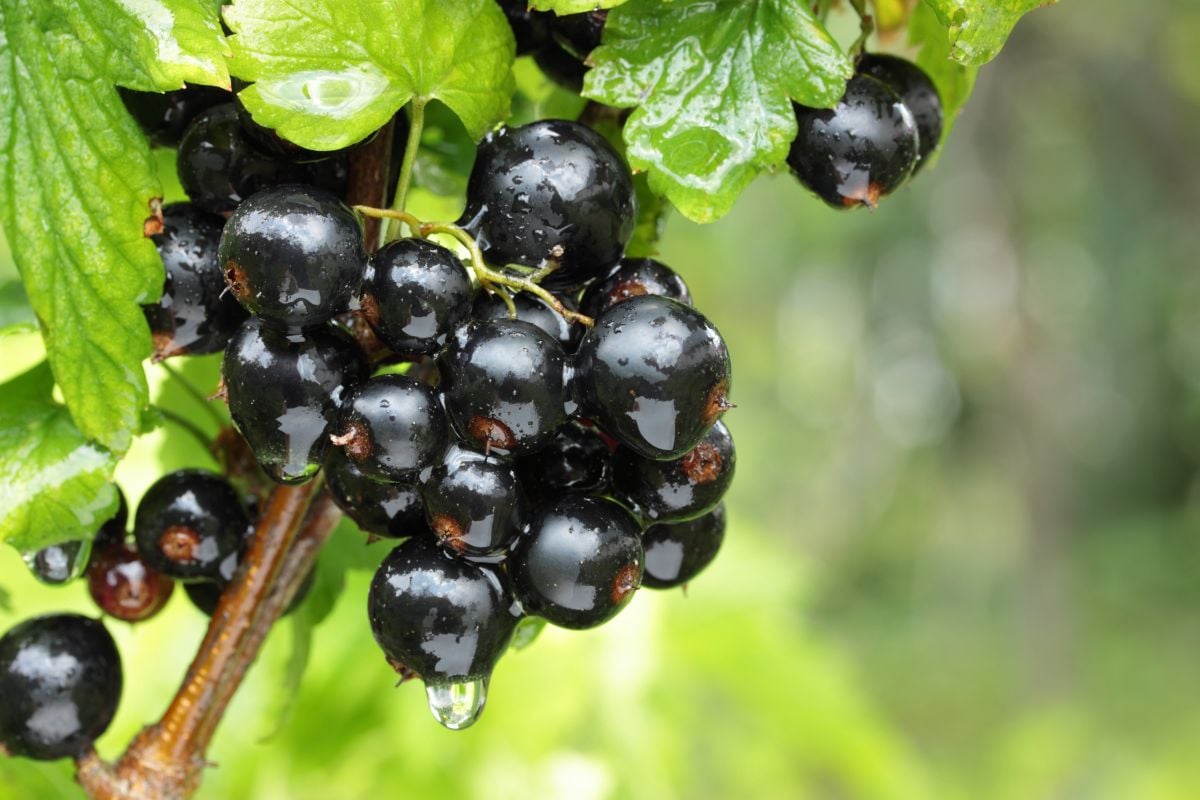 Grown exclusively for the home gardener, Big Ben is a recent variety with large, sweet fruit delicious straight from the bush. The Big Ben berries also have a good flavor when cooking, making them an excellent dual-purpose currant.  The bushes grow to about six feet and produce entire crops as early as three years.  Disease resistance is excellent, particularly to mildew and leaf spots.  It produces early crops.

The Blackdown black currant is an English variety of currant cultivated for its abundant, sweet, juicy, dark berries.  Very sweet and aromatic, the Blackdown is suitable for eating fresh and for preparing jam, jellies, and juice. 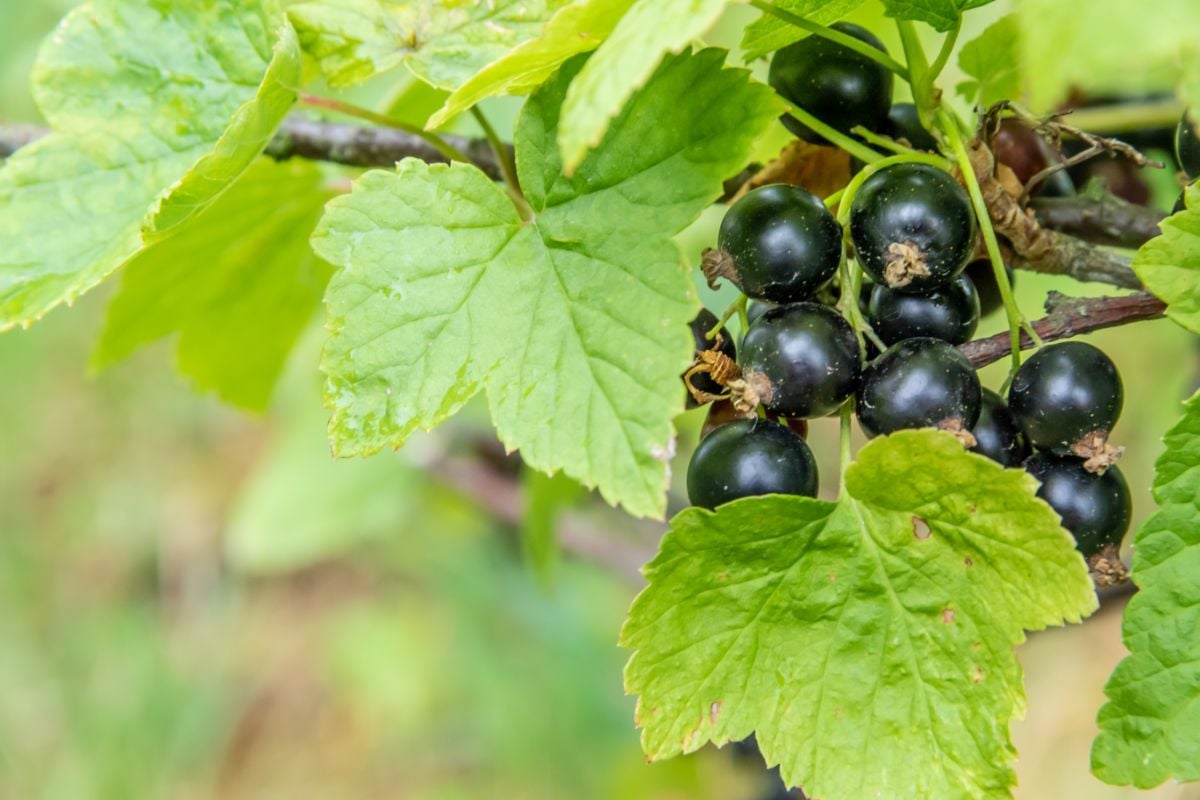 Sometimes called the clove current because of its highly fragrant flowers,  Crandall is easy to grow, rust-resistant, and ornamental, with leaves that turn a brilliant red and yellow in the late summer and fall.  It produces abundant early spring blossoms in yellow, fruiting in August.  The Crandall black current is very large, perhaps the sweetest currant of all, and flavorful with just a hint of spiciness.

Crusader black currants are a variety that consistently produces medium-sized fruit. The berries have thicker skins than others and a higher acid level. This acidity means they store well and break down slower. Crusader is resistant to white pine blister rust.

Consort black currants are smaller than most, but they have that sharp, characteristic taste that the fruits should have. The bushes produce for a long season, producing fruits that ripen evenly. Consort is resistant to the disease that threatens white pine trees. Like all currants, they are becoming highly prized as a superfood high in minerals and antioxidants. 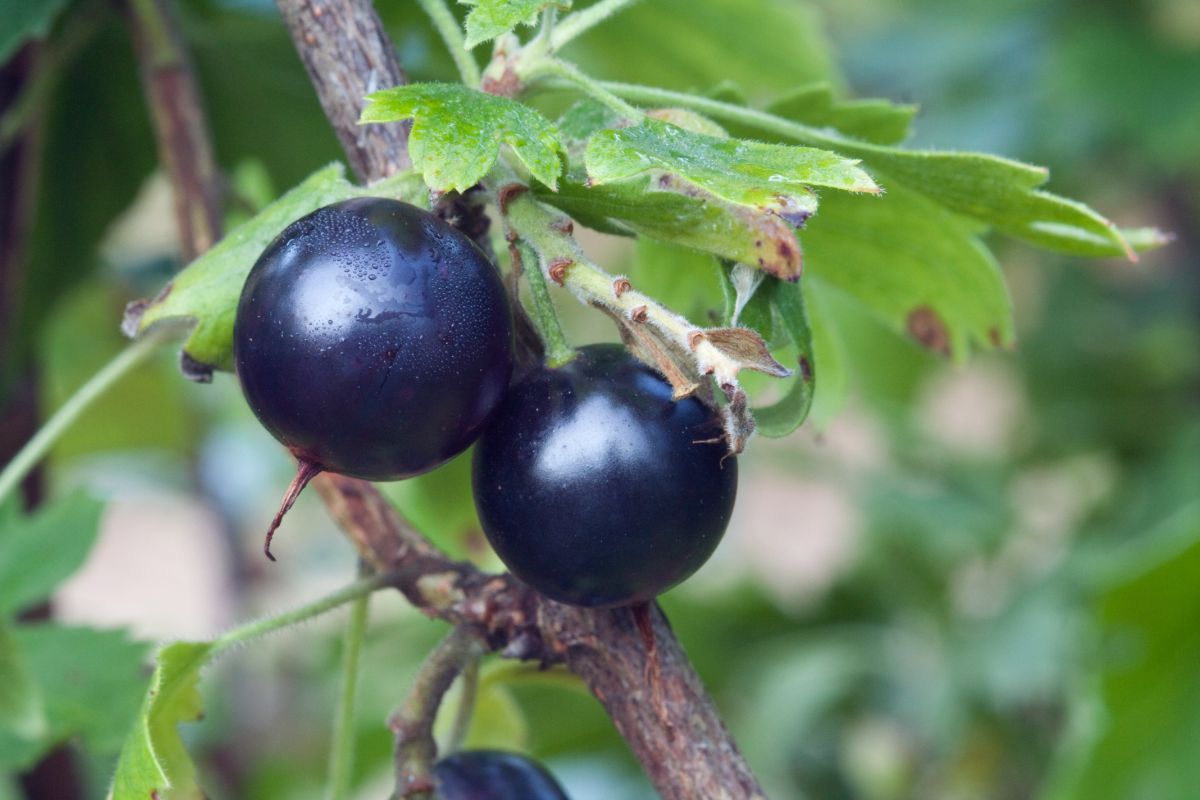 This variety is possibly the sweetest black currant. These berries are best eaten fresh because their flavor tends to be reduced when cooked. These berries are larger than average, but they’re not a vigorous plant, so you usually get less.  The Ebony is among the earliest fruit of any black current.  It produces fruit after only one or two years and has average disease resistance.

Only recently available, the Foxendown has exceptional disease resistance to almost all blackcurrant ills and is therefore virtually perfect for the organic gardener. If you have had problems growing blackcurrants, this variety may work for you. The berries are medium-sized and produce a good yield.

The bushes grow upright, which makes picking easier than usual. This is an early-season variety. Its flavor is outstanding. 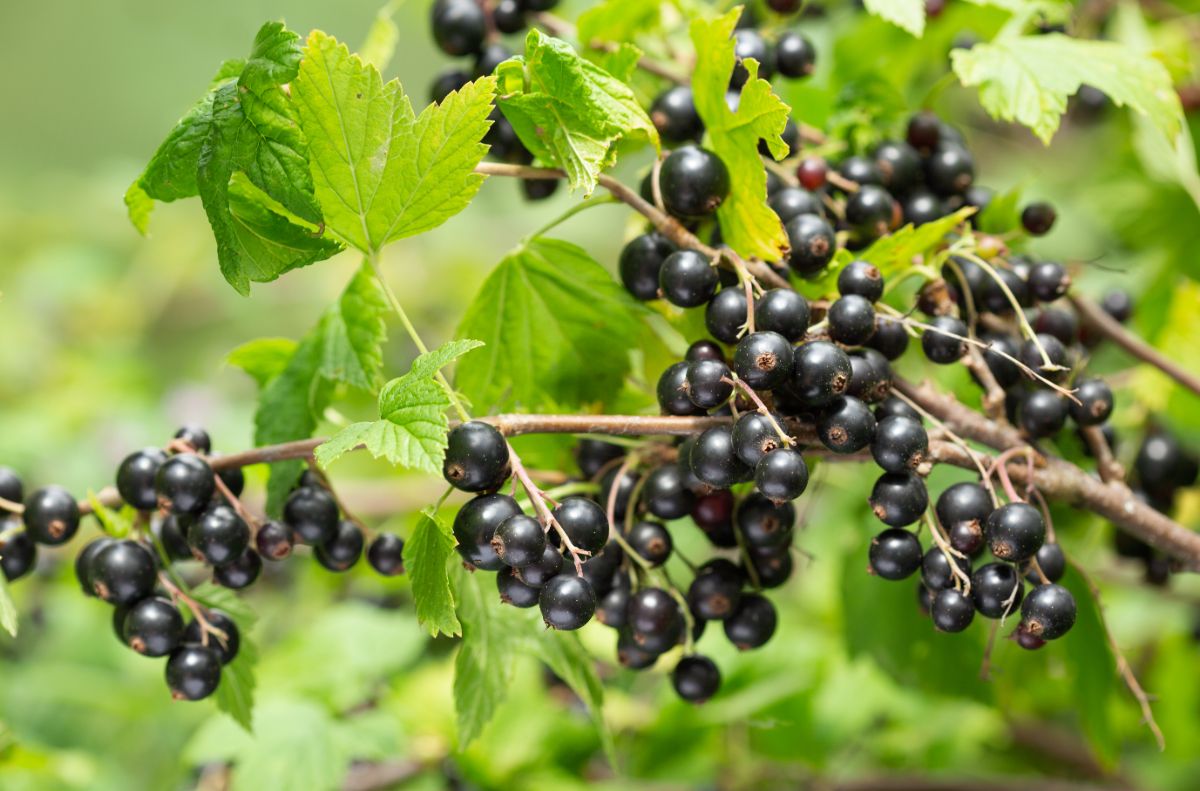 Developed in Sweden from a cross with Consort, Titania is a vigorous plant and only takes around three years to reach maturity. It grows well in light soils with low levels of nutrients. The berries are relatively sweet and large, plus the bushes have high yields.

The plant has a long producing season with high yields.  Titania is resistant to mildew and white pine blister rust; it can grow to more than six feet tall if not pruned. 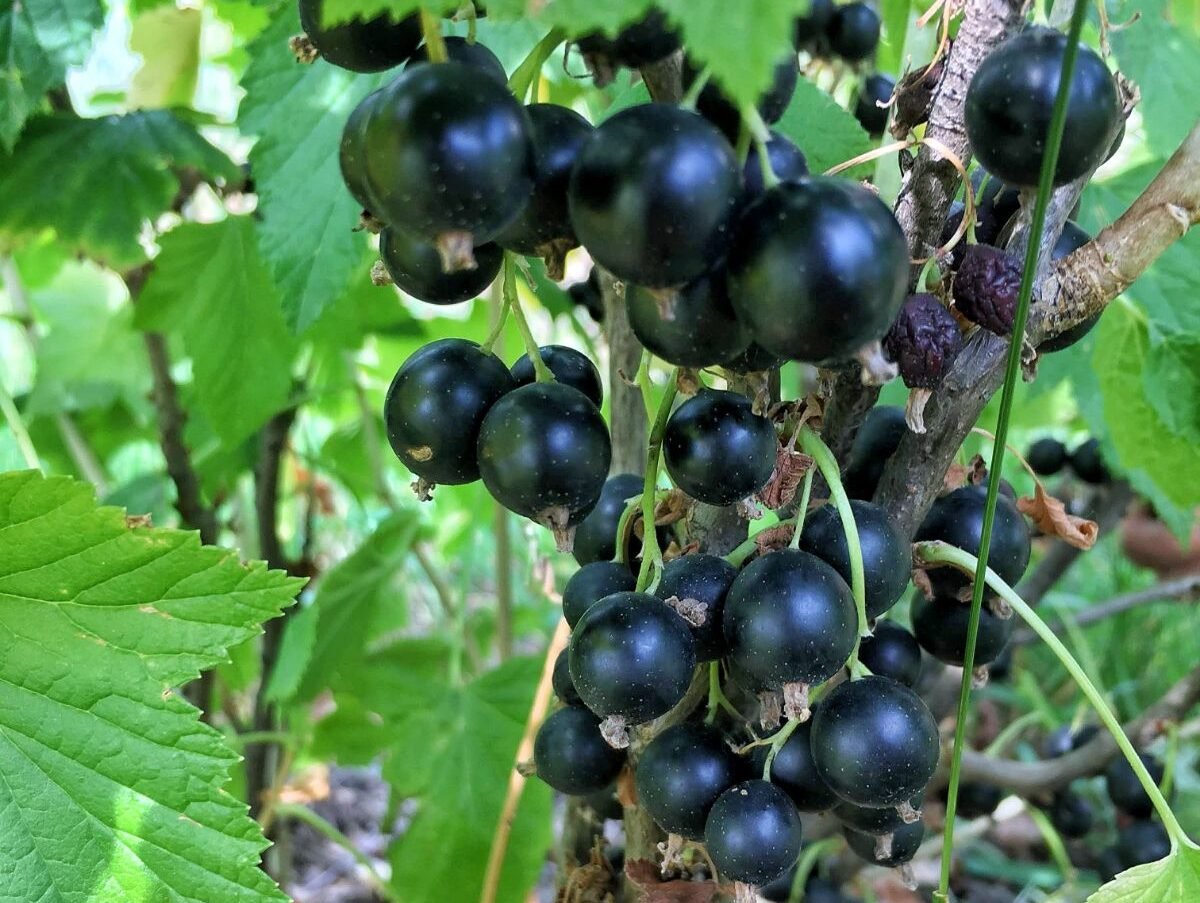 The Wild Black Currant (Ribes americanum) is a North American flowering shrub that produces edible fruits that can be used in various sweets, including jams, jellies, and pies. It is closely related to gooseberries.

The wild black currant grows to about seven feet tall with three-lobed leaves surrounded by coarse teeth.  The lowers are a greenish-yellow color and grow in a bell-shaped cluster.  The fruit is a round dark purple berry. 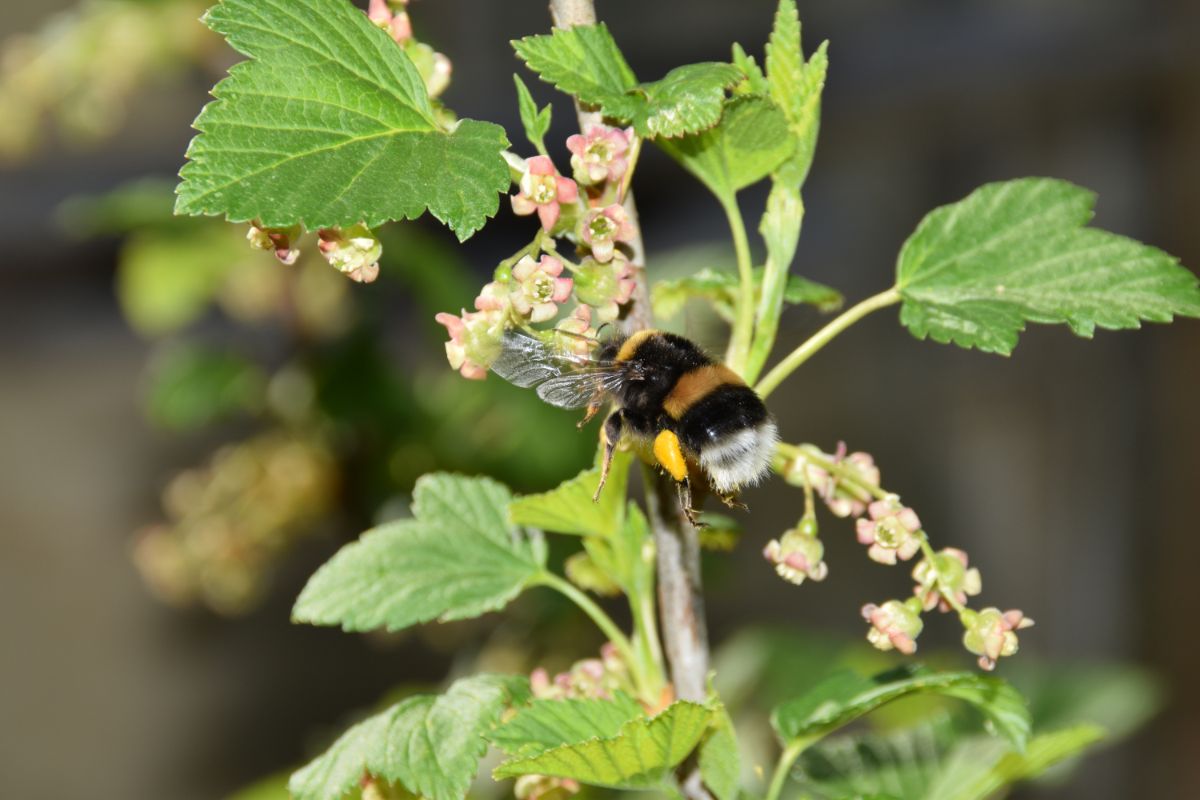 The wild black currant generally grows in all but the westernmost states and provinces of North America, generally above the Mason-Dixon line.  It prefers shady, low-lying damp woodlands.  Its success throughout this range varies, with the plant being considered endangered in Maryland and an invasive weed in Michigan.

They are pollinated by honeybees and bumblebees, while the leaves feed caterpillars.  Various wildlife, including birds, squirrels, foxes, and deer, enjoy the berries.  Native American populations used the fruit for sweets and its curative properties.  Later European immigrants also used the fruits for jams, jellies, and pies.

The black currant is high in Vitamins A and C, potassium, and phosphorus. The ribes name is reflected in the Ribena beverage, a popular concentrated drink in the United Kingdom and Europe.

A raisin made from small black Cornith or Champaign grapes is sold as Zante currants in the United States.  They are commonly used in Irish soda bread and scones and can be highly toxic to domestic animals like dogs and cats.  True black currants are not related to the Zante currants and do not appear harmful to pets.

Ingestion by a pet of even a tiny amount of the Zante currants can result in acute kidney failure in animals.