Beans sprouts have been around for more than 5000 years and are considered beneficial to most people. Here are 7 types of beans sprout and how to grow them. 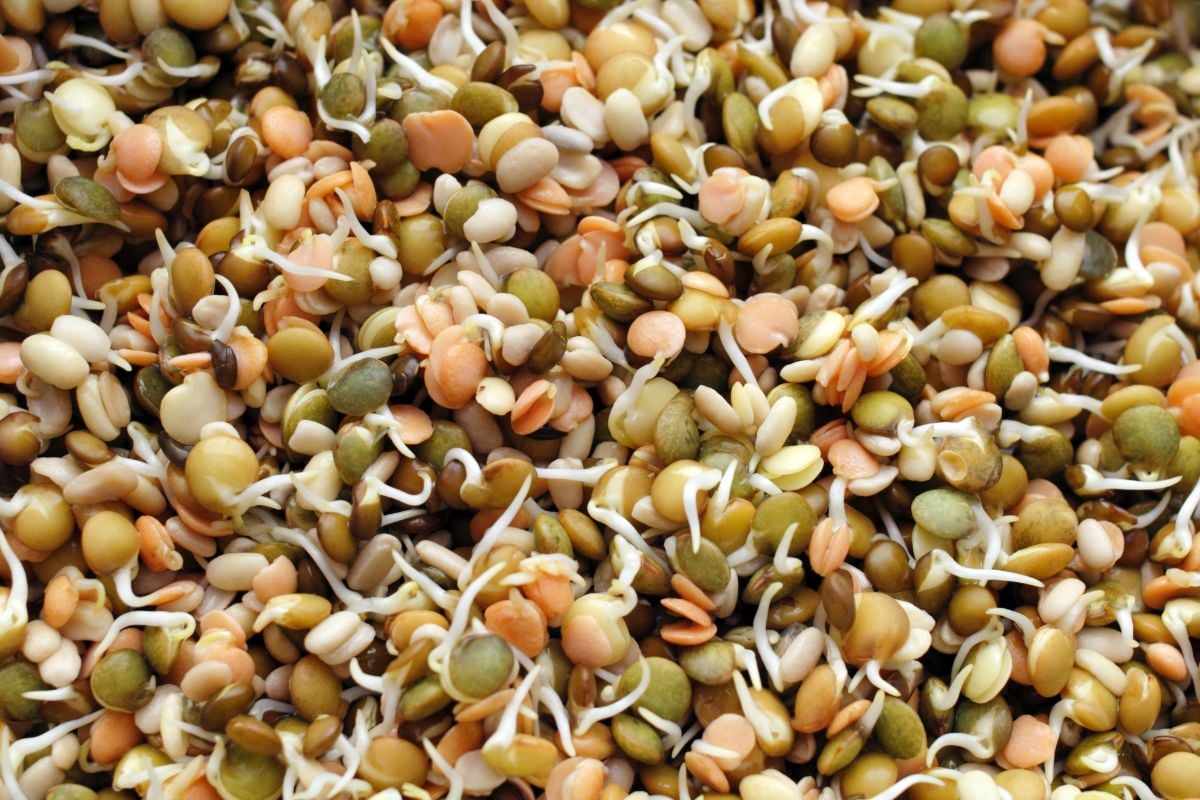 Sprouting is a natural process that’s characterized by the germination of grains, vegetables, legumes, as well as seeds. bean sprouts, in particular, are produced when a bean germinates, and the tender shoots that result are referred to as bean sprouts.

According to studies, the sprouting process increases the nutritional content of the foods consumed, and sprouts are also known for improving the digestibility of certain proteins found within the beans.

bean sprouts are a common element in salads, stir-fries, and even popular Asian recipes. You can sprout them on your own or obtain them at your closest grocery shop or farmers’ market. In the following article, we’ll provide a detailed overview of the many varieties of bean sprouts available and what makes them so valuable. 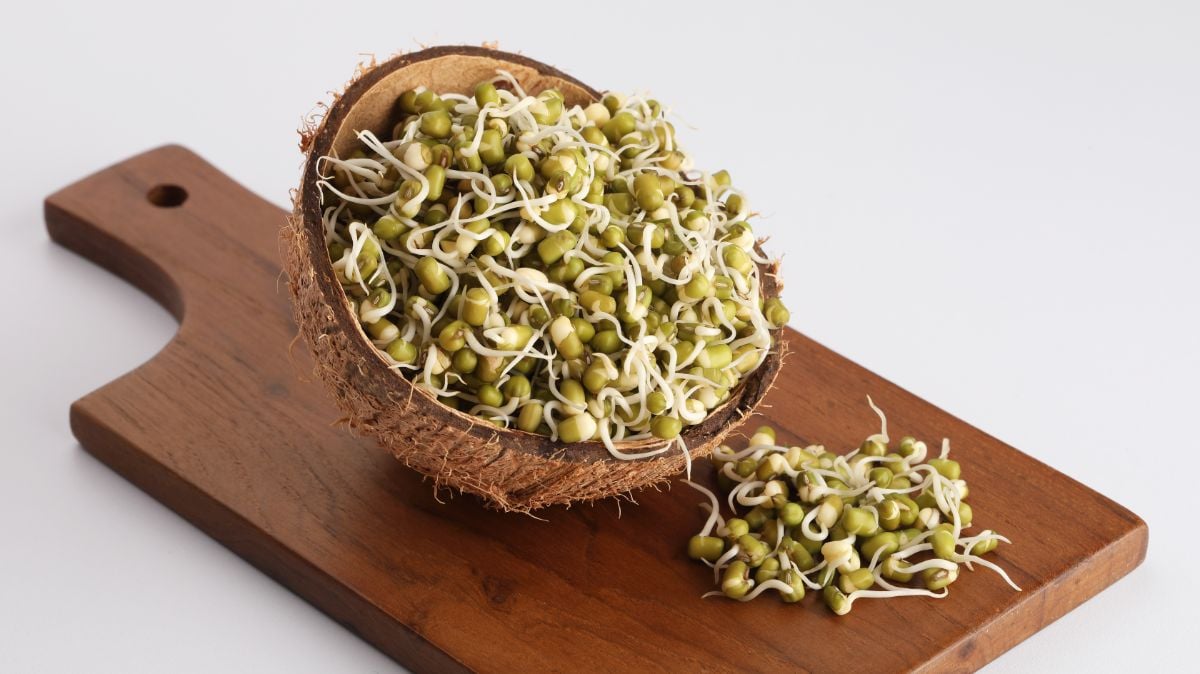 In many ways, mung beans resemble the mitochondria of the sprout, and they can reach a height of two to three inches. This is the most popular kind of bean sprout and mung beans themselves contain a lot of nutrients. There is a 41% value of vitamin K as well as other nutrients such as Vitamin E, Beta Carotene, Phytosterols, and protein.

Mung bean sprouts are derived from mung beans, which are mostly produced in East Asia. In the recent past, mung beans have risen in popularity and can be found in most major retail establishments.

Mung beans are also a mainstay in Asian cuisine, making them a fantastic addition to dishes such as fried rice, spring rolls, and stir-fries.

The calorie count of mung beans is quite low. For example, 1 cup (equal to 104 grams) has just 84 calories.

Bean sprouts have been linked to a myriad of benefits such as contributing to cancer prevention and treatment. This is all thanks to their ability to combat free radical damage. A study carried out on human cells discovered that mung bean sprouts have a toxic impact on cancerous cells while having no adverse effect on normal tissues. 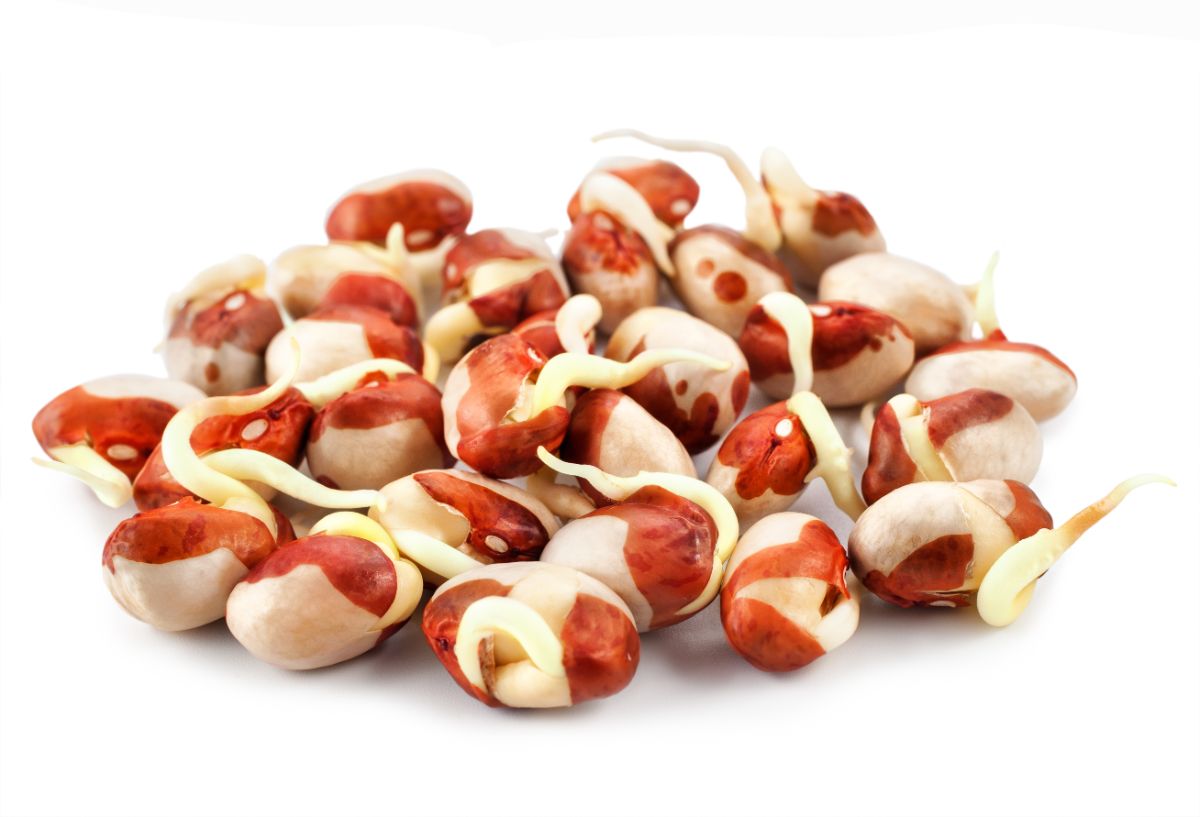 This type of bean sprout is made from the kidney bean which is scientifically known as Phaseolus Vulgaris L. These sprouts have a high amount of protein and a low calorie and carbohydrate content. The following nutrients can be found in a cup (184 grams) of kidney sprouts:

These sprouts also contain high levels of melatonin, which is a chemical that is crucial for the control of sleep patterns. As you get older, your body’s ability to produce melatonin diminishes, which may have disastrous consequences for your health as you grow older. so it might be a good idea to incorporate kidney bean sprouts into your diet among other melatonin-promoting foods and supplements. 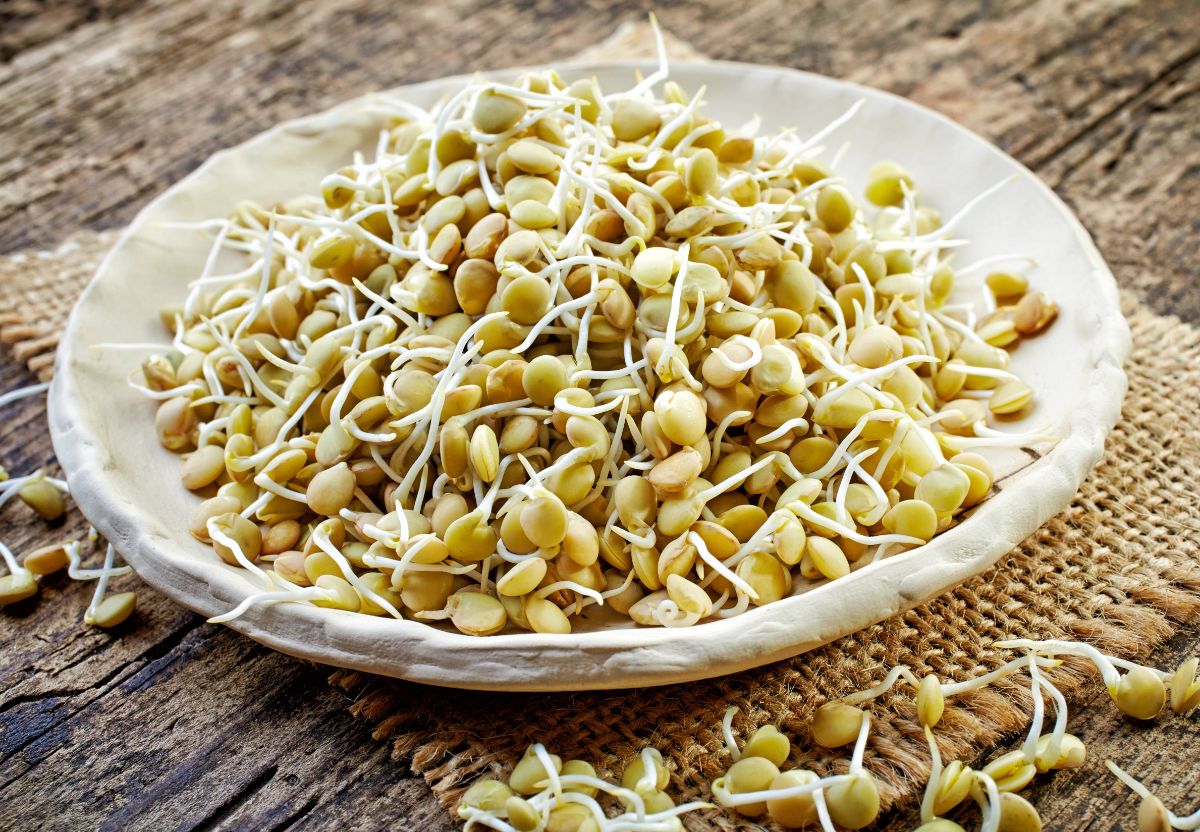 Lentils are a type of legume that’s available in a variety of colors and can be sprouted for nutritional benefit. The following are the nutritional values for one cup of lentil sprouts:

The sprouting process increases the phenolic content of lentils by a factor of 122 percent, making them more nutritious. Phenolics are a class of antioxidant plant compounds that may have several benefits such as anticancer, anti-inflammatory as well as anti-allergic properties. Phenolic compounds can be found in a wide variety of other plants as well.

Because lentil sprouts have a high antioxidant content, they may help to lower bad cholesterol levels, thus reducing the risk of heart disease, obesity, and type 2 diabetes in the body.

An 8-week research study among 39 patients with type-2 diabetes found that ingesting 3/4 cup of these sprouts on a daily basis results in lower triglycerides and overall LDL cholesterol levels in the participants. One can obtain these benefits from lentil sprouts whether they are raw or cooked, and both methods are as delicious. 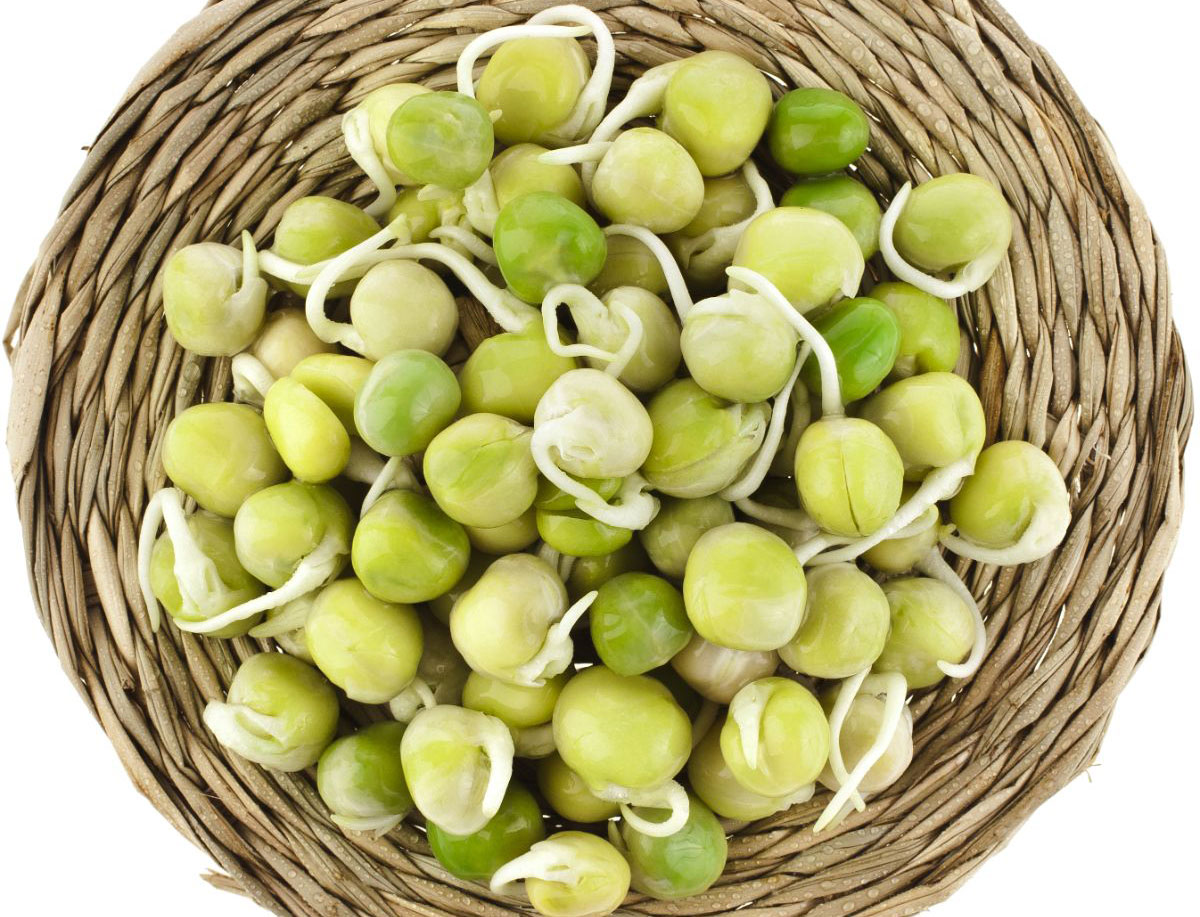 Pea sprouts are distinguished by their sweet taste, and sprouting may be done with both green and yellow colored peas. They are packed with nutrients, and 120 grams of peas may provide the following nutrients:

Pea sprouts contain twice the amount of folate as raw peas. Folate is an essential member of the B-vitamin family and it comes with a number of health benefits. Lack of folate is typically associated with reproductive problems in women, such as chromosomal abnormalities and cardiovascular issues that might result in problems during pregnancy.

For instance, a folate deficiency can cause abnormal bone formation in the fetus’ spine or skull, leading to the child’s brain or spinal cord getting exposed at birth. If you suspect your child has a neural tube defect, see your doctor.

Taking folic acid supplements when pregnant or nursing helps to lower the risk of neural tube abnormalities in women of reproductive age. 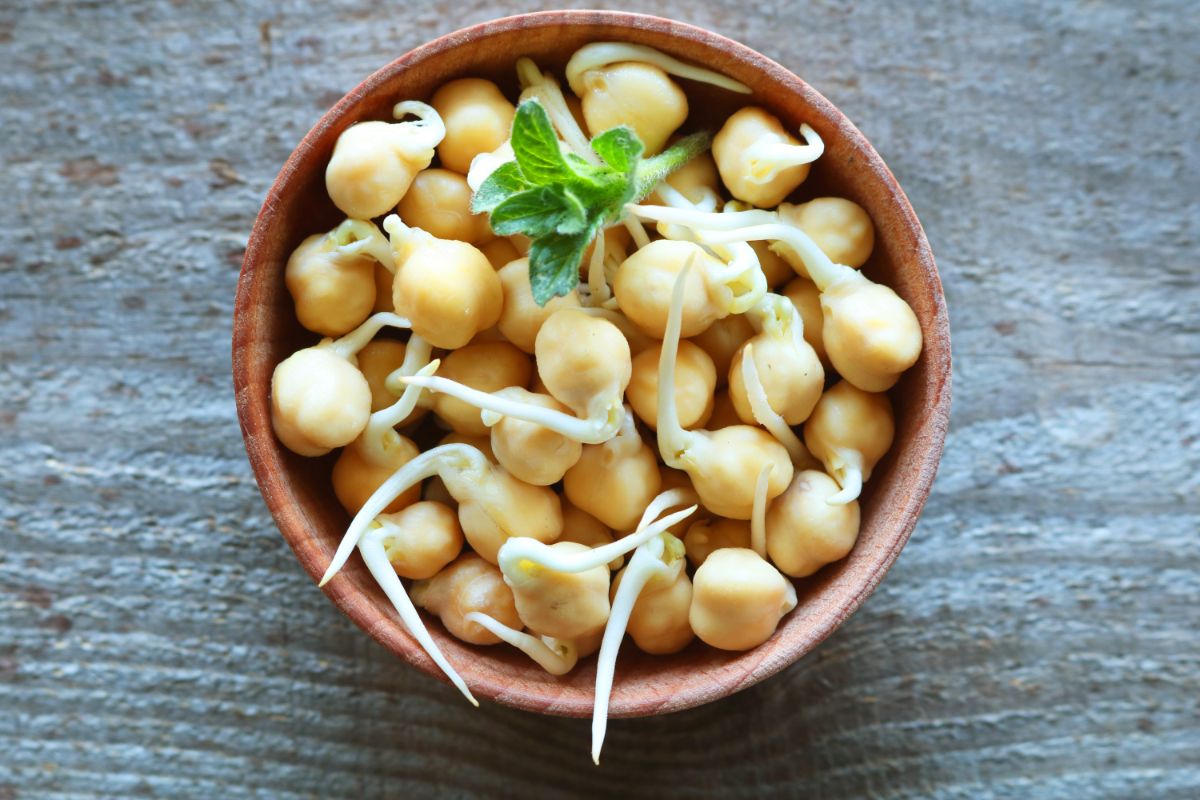 The process of making chickpea sprouts is really simple, and it only takes about two days for them to begin sprouting. In comparison to other sprouts, they offer a higher nutritional value and contain a significant amount of nutrients. One cup of chickpea sprouts (140 grams) is packed with the following:

It’s worth noting that sprouting chickpeas boosts their overall isoflavone concentration by more than 100 times, which is a remarkable feat. Isoflavones are a kind of plant that contains phytoestrogen, and the molecule contained in such plants has the ability to imitate the effects of the hormone estrogen. 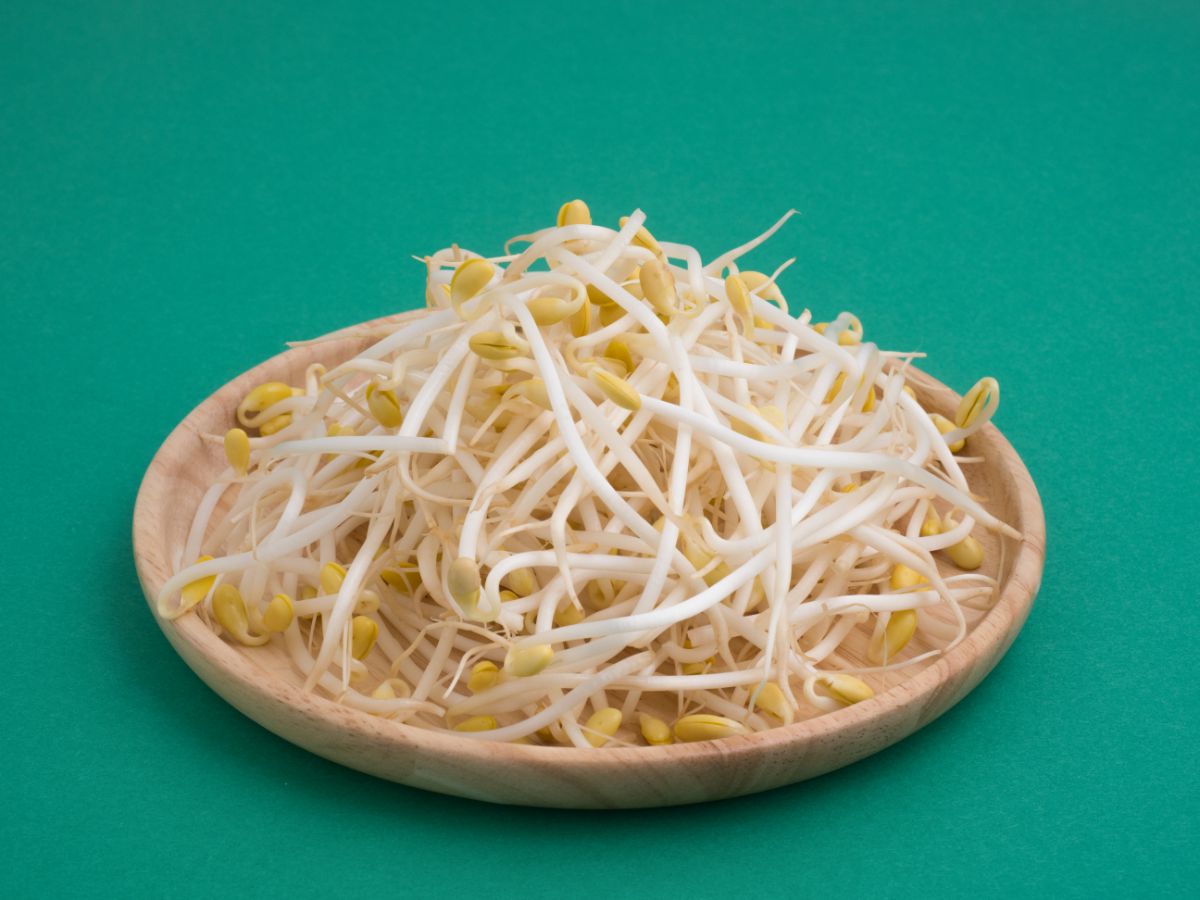 Soybean sprouts are commonly found in a variety of Korean recipes and they are made by sprouting soybeans. A 70 gram serving of soybean sprouts contains the following nutrients:

Soybean sprouts have lower levels of anti-nutrient phytic acid, which means that it’s easier for the body to absorb the nutrients contained by the sprouts. Soybean sprouts are also unique in their ability to synthesize non-heme iron, a form of iron that’s present in certain plants and is effective at combating inflammation.

One animal study found that soybean sprouts can also increase hemoglobin levels in rats who are otherwise healthy. This means that sprouted beans have the potential to both prevent and treat specific kinds of anemia by regulating iron levels.

This is important to note because low iron levels in the body make it impossible to generate sufficient hemoglobin, resulting in lower levels of oxygen delivered around the body.

That’s because the protein hemoglobin is responsible for delivering oxygen around the body through red blood cells, and you will not be able to create sufficient hemoglobin if your iron levels are insufficient. 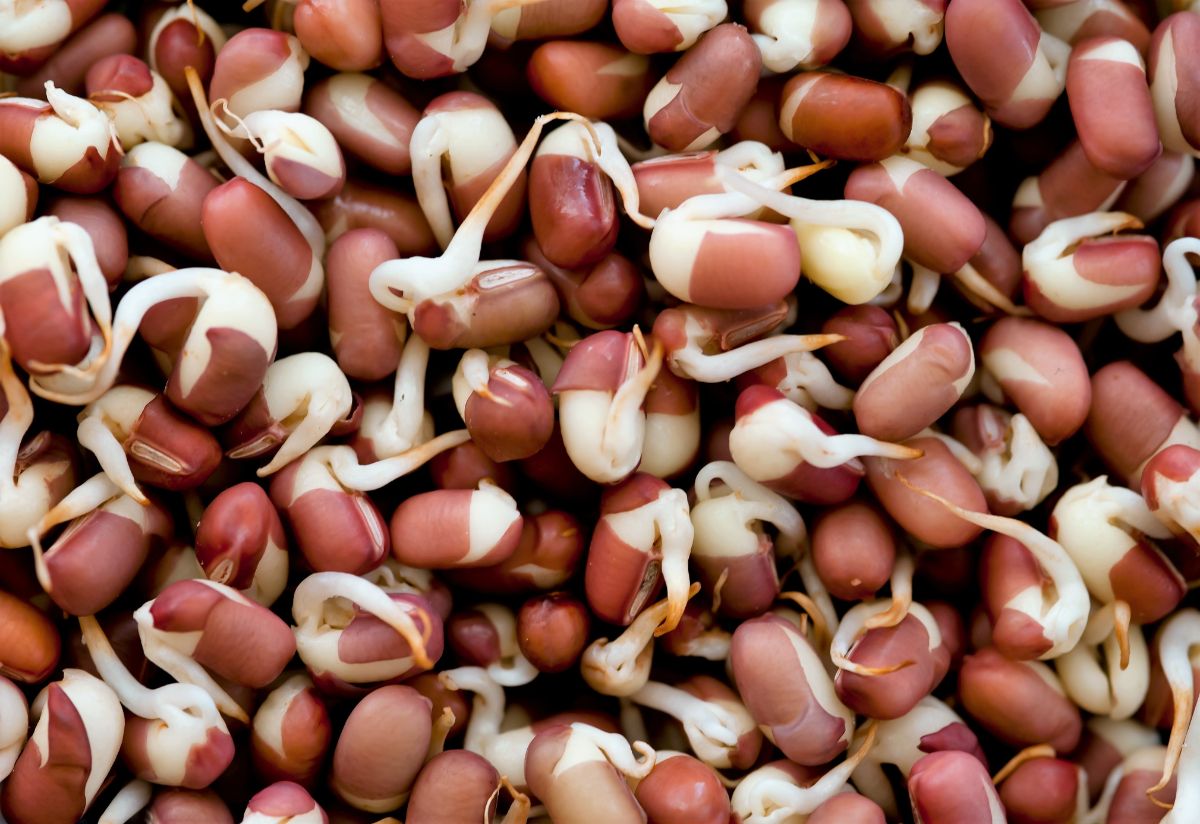 Adzuki beans are similar in appearance to mung beans, however, they are smaller in size and they’re grown in East Asia. One cup or 133 grams of Adzuki bean sprouts has the following nutrients:

Adzuki beans’ phenolic antioxidant content is increased by 25 percent through sprouting, and sinapic acid has the greatest effect on the phenolic properties in these sprouts.

Among the many health benefits of sinapic acid are improved blood sugar control, anticancer, antibacterial, as well as anti-inflammatory properties. Studies done on animals have also shown that sinapic acid can lower high blood sugar levels while raising insulin resistance in diabetic rats.  Studies are yet to show if Adzuki bean sprouts have the same impact on people.

Wraps, salads, and smoothies are all great ways of consuming Adzuki beans, which have a nice, nutty flavor. They may also be used in soups and stews.

How to Grow Bean Sprouts

The process for growing bean sprouts is the same regardless of the kind. The amount of sprouts produced from a half cup of beans is equal to one cup of beans when started from scratch. 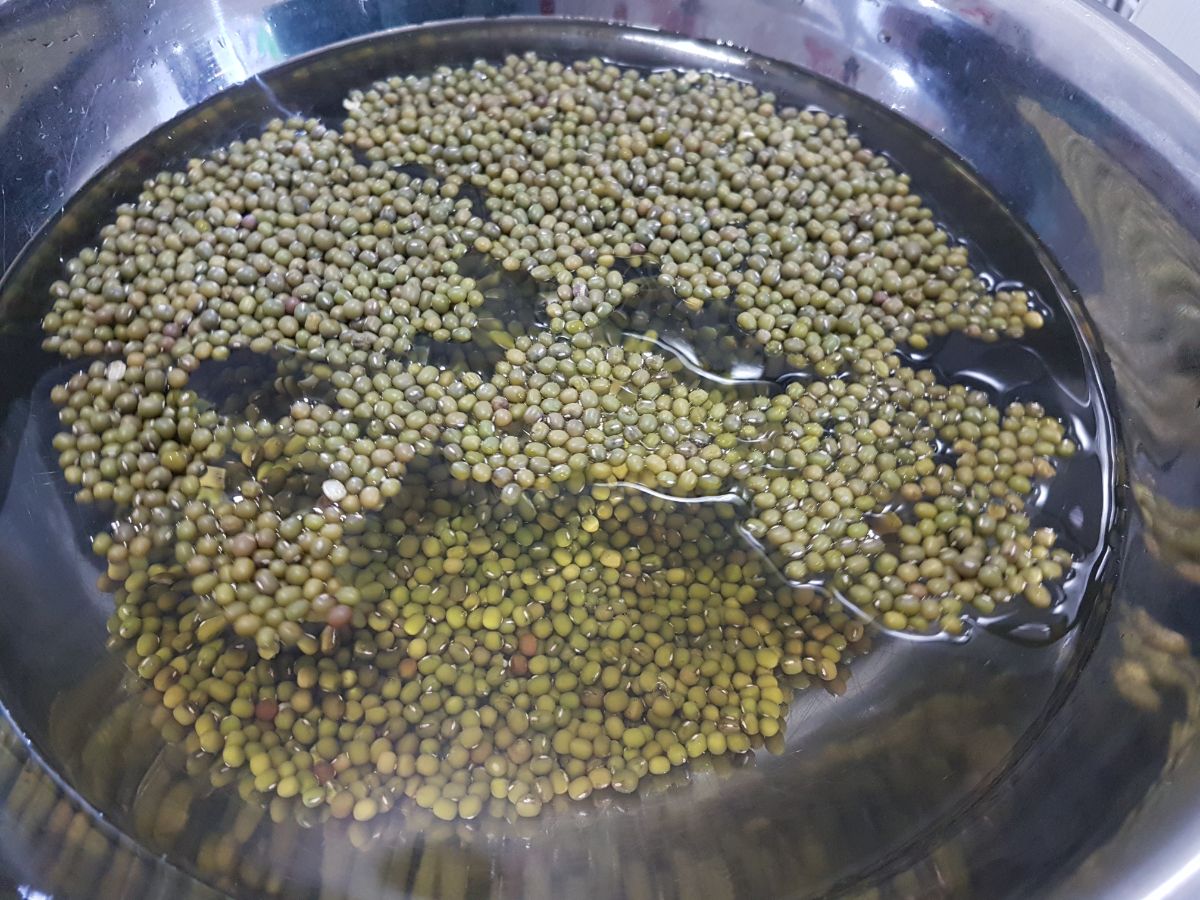 The sprouting process can be started at any time. However, you will get better results if you break it into 12-hour increments. This means that the beans must be soaked for 12 hours. Keep an eye on the clock and make sure you complete this step within 12 hours of starting.

Step 3: Put the Beans In the Sprouting Jar or Container 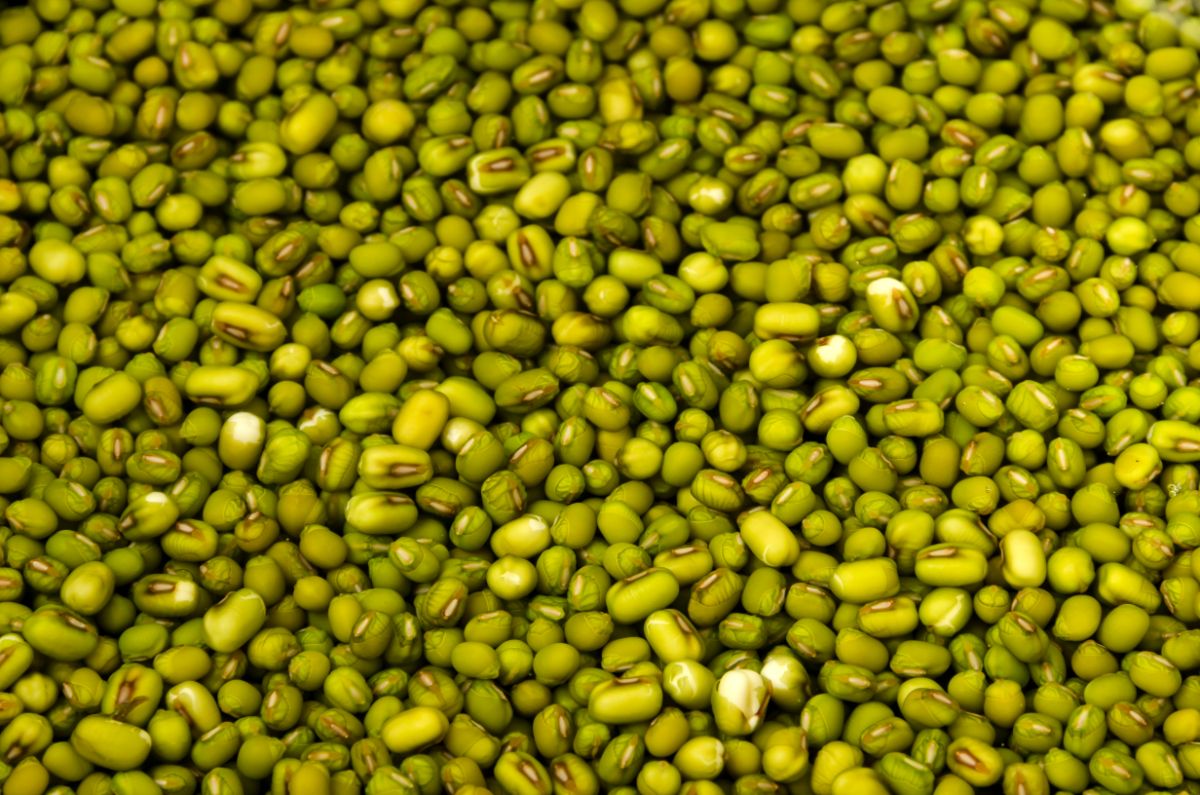 Once the beans have been soaked for 12 hours, rinse them again then drain them well. For small amounts of bean sprouts, use a jar, and for large amounts use a container. Use a cheesecloth to cover the container or jar, then place it in a dim area. The area should be far from direct sunlight and aim to keep the temperature between 70 to 80 degrees Fahrenheit. 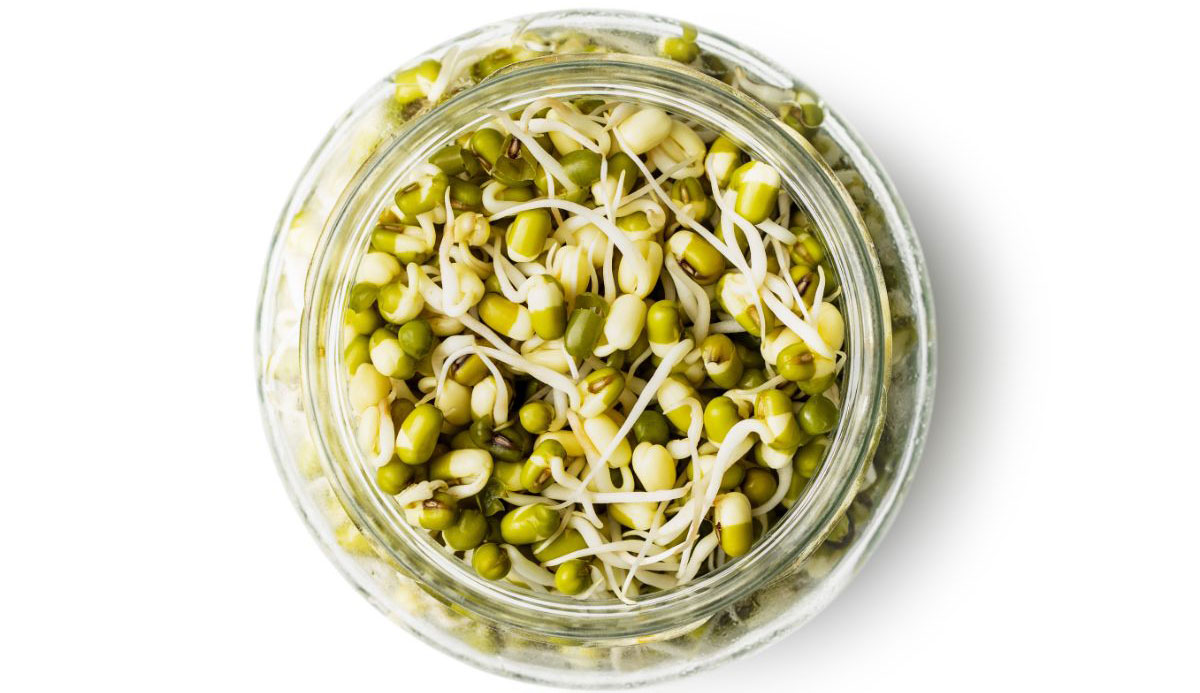 Every 12 hours, make sure that the bean sprouts are sprinkled with water and avoid overwatering them. You may use a strainer as a bowl for sprinkling the sprouting beans, and if you’re using a jar, you should roll it to ensure that all the beans are sprouted equally moist. 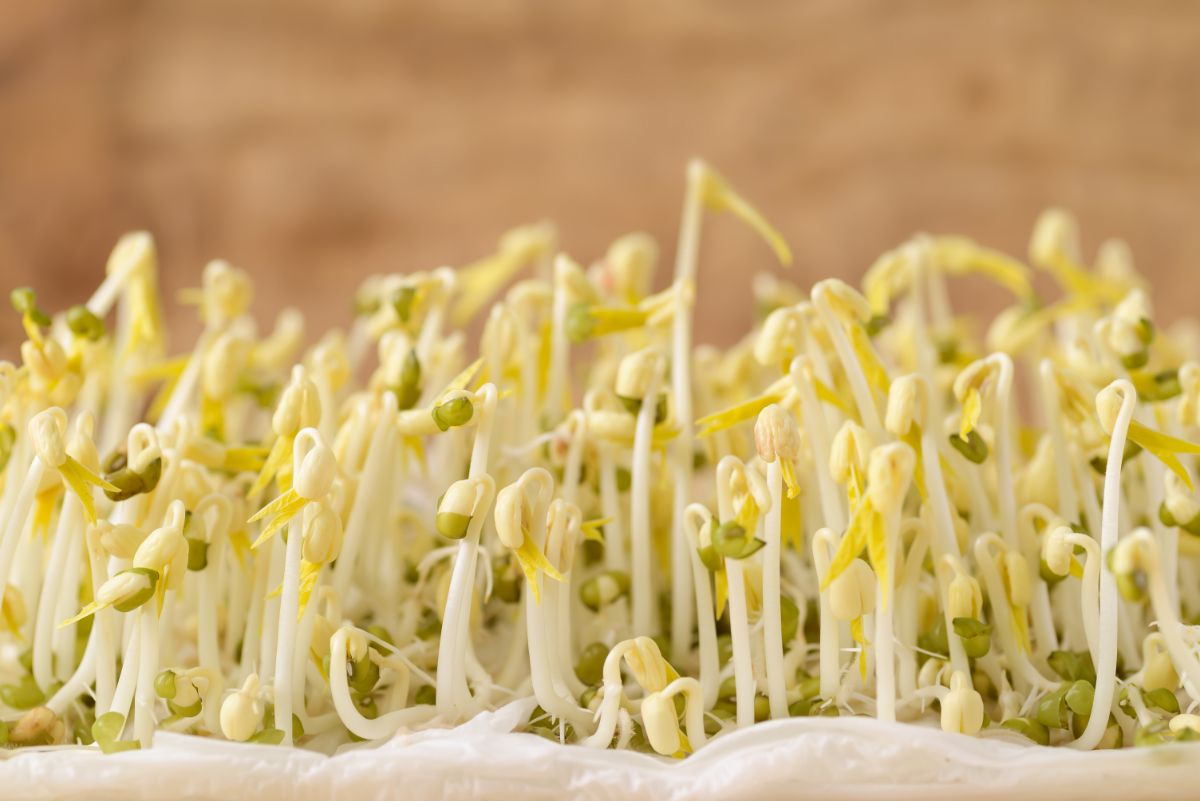 Once the bean sprouts have matured, you should place them in a container or a bowl and fill them with water. The sprouts will naturally sink to the bottom whereas the sprouts float on top making the process of skimming and discarding them super easy. Lastly, place your bean sprouts on a strainer to allow them to drain properly.

Sprouting improves the nutritional profile of beans by increasing their antioxidant value, while simultaneously decreasing the amounts of antinutrients in the bean. Bean sprouts may provide a variety of health advantages, including better blood sugar management, lower cardiac risk, anemia, birth abnormalities, and reduced menopausal symptoms, to name a few. They also make a delicious addition to salads, soups, and stir-fries because they are colorful and crunchy.

What are Bean Sprouts?

Bean sprouts are the soft, crisp root that develops from the bean. The fact that they’re mostly composed of water is what makes them crunchy, and they’re often consumed raw or very barely cooked.

Where Do Bean Sprouts Originate From?

Bean sprouts have been grown in Asia for more than 5000 years. Today, they are grown in portions of Australia, Thailand, India, and other Asian countries, among other places. You can even grow them on your kitchen counter!

Are Bean Sprouts Good for You?

Bean sprouts are usually considered to be beneficial for the majority of individuals. They are a fantastic choice if you are seeking a low-calorie, low-fat, high-protein, low-carb, nutritious meal that is also low in calories, fat, and carbohydrates. Bean sprouts do contain fat, but only in minimal amounts and the fats that are present are mostly good.