Discover the 10 different types of bamboo you can use in a variety of places such as your yard, gardens, decks, patios and indoors. 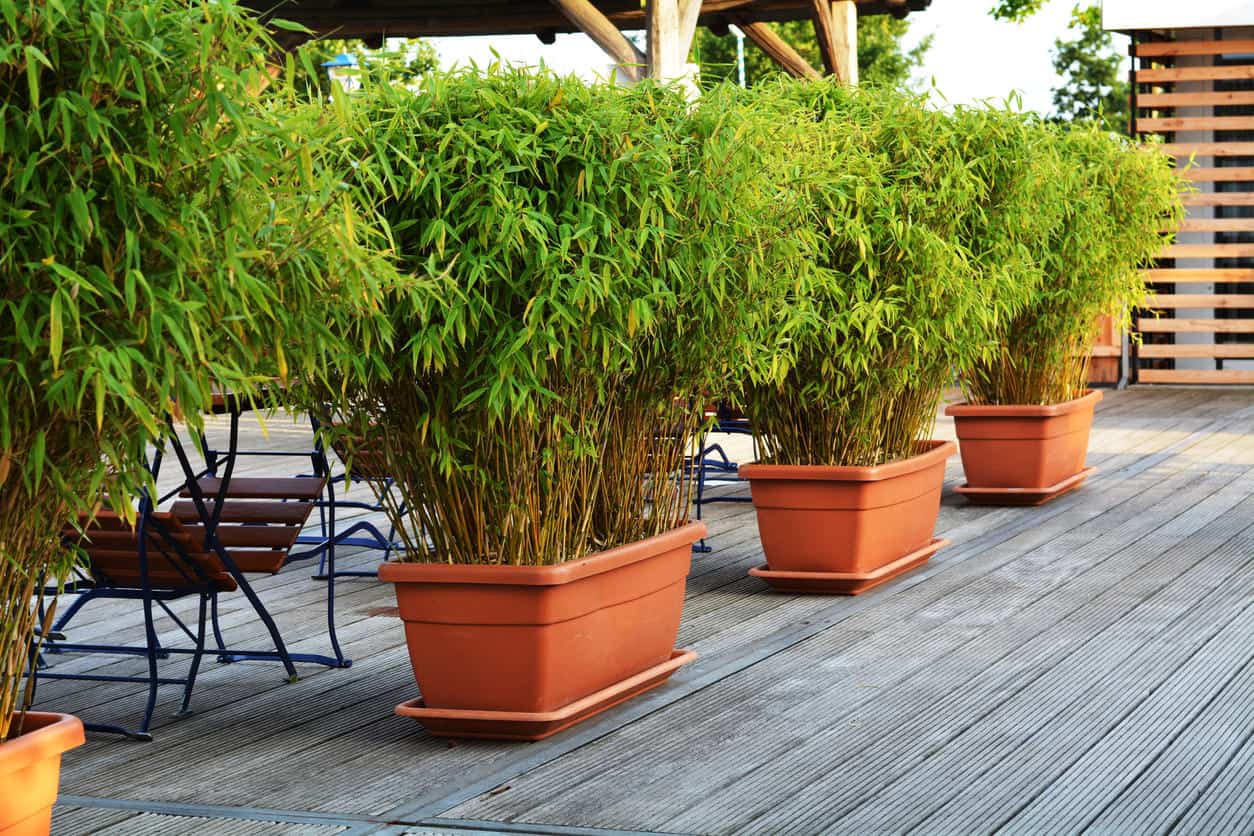 Bamboos are a woody perennial plant that belongs to the true grass family called Poaceae [source: ScienceDaily.com]. The plant’s size varies from species to species from giant timber to small annuals. Bamboo evolved around 30-40 million years ago after the dinosaurs died out. It is famous for growing very quickly since it can grow up to 91–122 centimeters in a single day. That means that it actually grows up to 3.8-5.0 centimeters in an hour!

Bamboo species are mainly divided into two main types: runners and clumpers. Clumper bamboo trees grow into a slowly expanding tuft while runners produce shoots several meters away from the parent plant. The Chinese names for different bamboo trees all contain the character ‘竹’. It is pronounced as ‘zhu’.

Clumping bamboo is popular since they aren’t any invasive species and stay in their assigned territory. Their underground stems called rhizomes are different from other timber or non-clumping bamboo. They actually make a u-shape instead of spreading horizontally. The new culms appear next to the parent plant and only spread a few inches annually. They can grow up to 8-25 feet, depending on the species of bamboo. 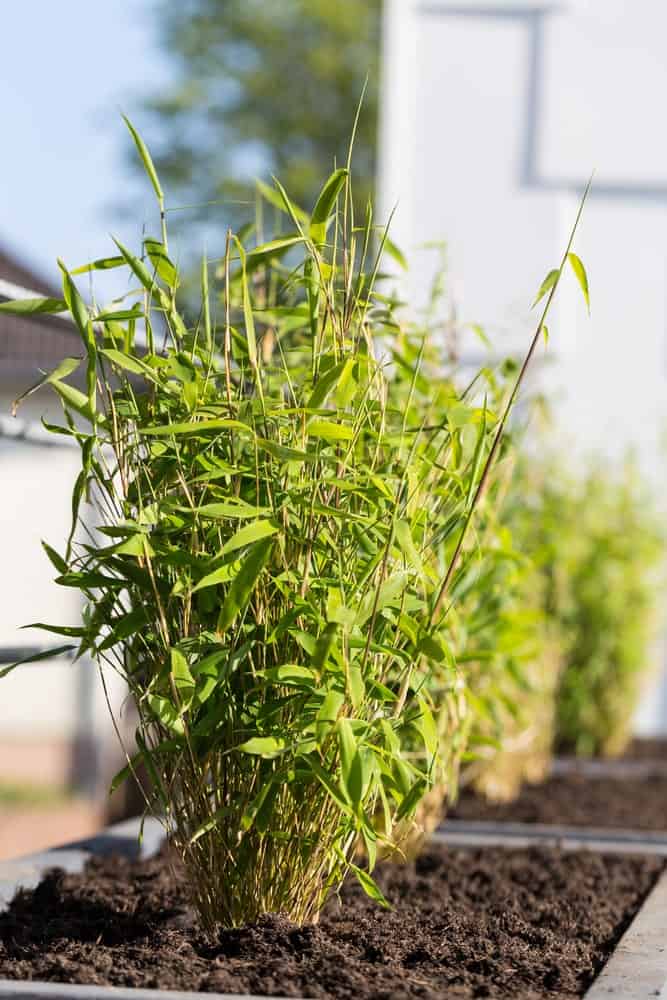 Fargesia is a clumping bamboo that belongs to the flowering plant section of the grass family. It is native to China but can be found in some areas of eastern Himalayas and Vietnam. Some species of the Fargesia are cultivated as ornamental plants like the fountain bamboo or umbrella bamboo.

The Fargesia develops small to medium mountain clumps. These are mostly found in the alpine conifer forests of many regions in East Asia. They are called ‘Jian Zhu’ in Chinese, which means arrow bamboo. The scientific name, Fargesia, was given to them in honor of a French botanist called Père Paul Guillaume Farges.

These special clumping bamboos are actually known as the world’s hardiest bamboos but aren’t an invasive species. They are the favorite food of the cute Giant Pandas. The decrease in the number of Fargesia had the worst effect on the population of pandas in China. They are now available in many nurseries over the world since they are affordable and have thick clumping habits. 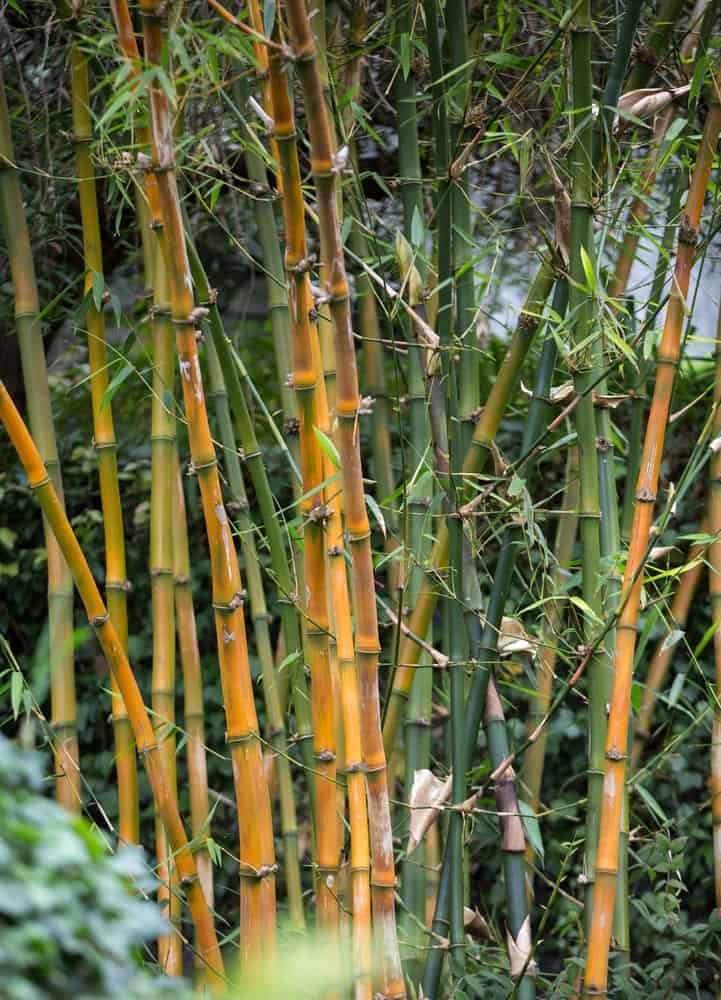 Guadua is part of the Neotropical genus and is a thorny clumping bamboo type. It is a moderate to large species of bamboo known as the largest Neotropical bamboo types in the world. There are many animals that depend on the Guadua bamboo as an instrumental part of their diets such as the Atlantic Bamboo Rats and Amazon rats.

This bamboo type is mostly found in Uruguay to all the way to Trinidad and northern Mexico. The largest concentrations of the species are found in Orinoco and Amazon basin. The trees are usually found in low altitudes fewer than 1,500m, but some species can live in altitudes higher than 2,500m. They are found in all sorts of habitats including savannas, gallery forests, lower-montane forests, lowland tropical forests, and inter-Andean vegetation in the valleys.

The Guadua is an important American bamboo since it is widely used for the construction of houses in coasts and river banks of Ecuador and Colombia. The building material is popular since it has great watershed protection qualities. The bamboo is even used for its mechanical properties as vegetable steel.

Over-exploitation has led to the depletion of its natural numbers. We need to ensure sustainable cutting of this bamboo since Guadua is more effective at removing carbon dioxide from the air than many other tropical trees. 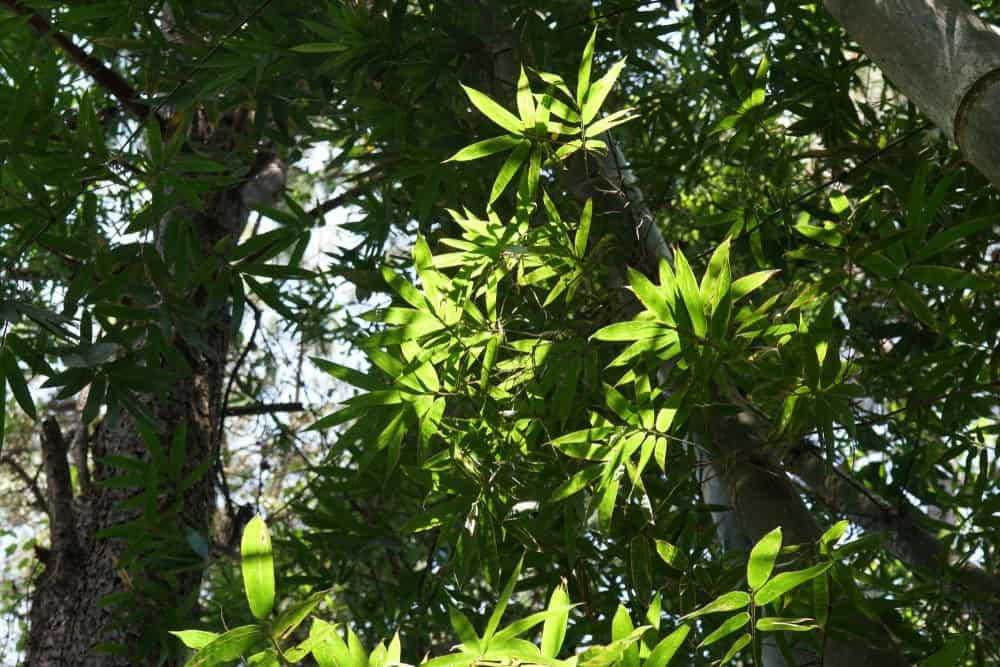 The Giant Bamboo known as the Dendrocalamus Giganteus is a giant subtropical and tropic clumping bamboo. It is native to Southeast Asia and is one of the largest species of bamboo in the world. These grayish-green bamboos grow in close clumps and usually reach a height of 30 meters (98 feet). It goes rather quickly and can grow up to 40 cm a day in favorable conditions. It is commonly found growing along river banks in low and high altitudes. The bamboo is native to Thailand, Myanmar, Indonesia, Southeast Asia, Sri Lanka, India, and Bangladesh.

The culms of the bamboo are straight and have a powdery appearance. When dried, the color turns to a brownish green and has a smooth surface. The young shoots of the Giant Bamboo are a blackish purple color.

The Giant bamboo is popularly used in India for bridge construction. It is also used as reinforcement of concrete, scaffolding, ladders, house frames in walls, tiles, and floor coverings. Its leaves are commonly used for thatching. 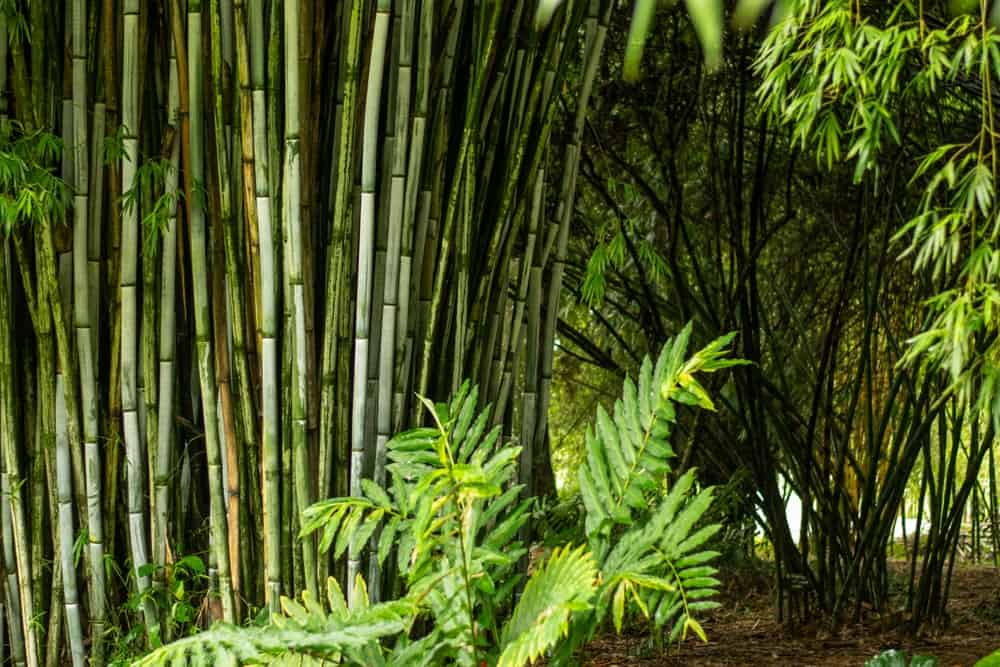 Chusquea Culeou is commonly known as the Chilean bamboo and is a species of the flowering plant of the Poaceae grass family. This evergreen bamboo is native to South America and is generally a frost tolerant species. It is widely cultivated in temperate regions and is native to southwestern Argentina, humid forests of Chile, and rainforests of Valdivia.

Chilean bamboo is a very important plant since it controls the patterns of forest dynamics. It impedes the regeneration of tree species so that they don’t grow too hurry and die off from the cold. They grow up to a height of 8m or 26 feet. They are clumping bamboo and form a substantial clump when conditions are favorable. They have hair lanceolate leaves that have a spine of the end, and their flowers are a light brown color. Blooming periods can last for 60 years and the plant dies after releasing its seeds. Unlike most bamboos, the stems of the Chilean bamboo are completely solid.

The cane of the bamboo could grow up to 6m and was initially used by Aboriginal tribes to make the pole of their spears. They are also used to make trutruca, which is a musical instrument.

Running Bamboo is categorized after its rooting characteristics. There are two main types of rhizome developments. Running bamboo exhibits monopodial or leptomorph rhizomes that are known for the independent undergrounds stems they produce. Running bamboo are found in almost all climates of the world. 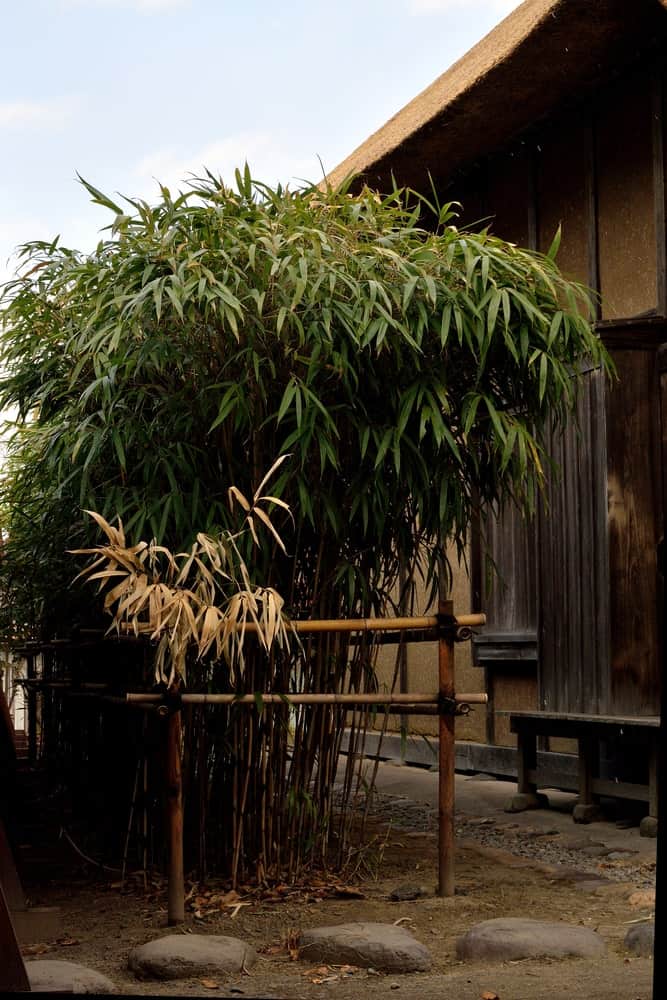 Pseudosasa japonica is commonly known as Japanese arrow bamboo. The name comes from when Japanese Samurai used the stiff, hard canes of the bamboo to make arrows. They are native to Korea and Japanese regions like Kyushu, Honshu, and Honshu. They are also grown in plant zones 6-10 in the United States from Florida to southern Connecticut.

The arrow bamboo is a cold-hardy species can tolerate temperatures till 0 °F/−17.7 °C. It can grow in full sun or shade and has palm-like leaves. The leaves grow up to 5-13 inches in length. It is typically a yellow-brown color and can even survive in containers and near salty air. 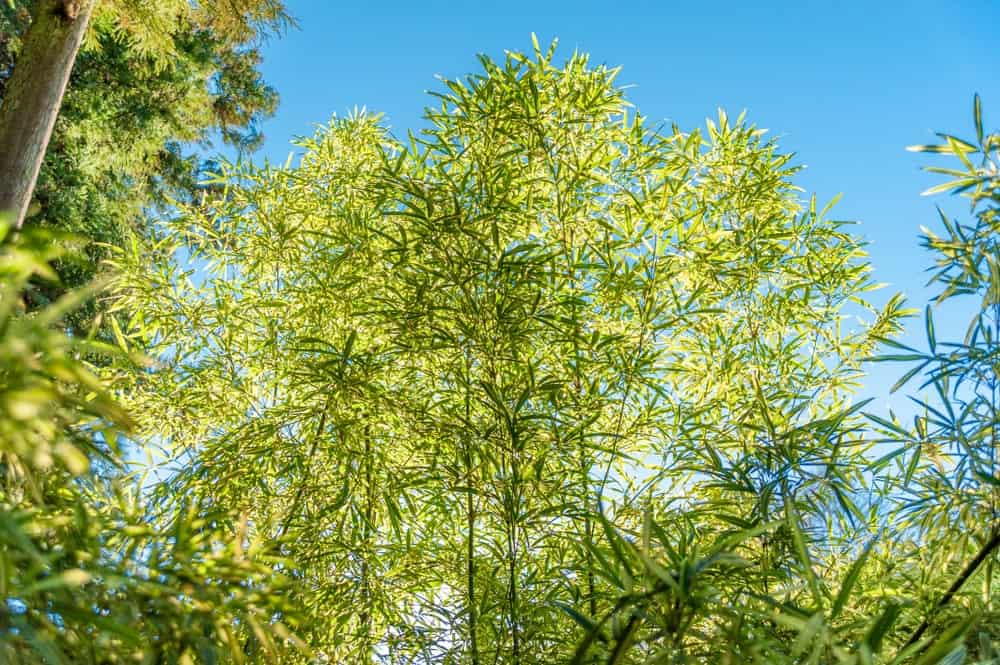 Dwarf Green Stripe bamboo’s scientific name is Pleioblastus. It is the East Asian genus of the monopodial bamboo. The plant is native to Japan and China, as well as New Zealand, Europe, Korea, and the Western Hemisphere.

This bamboo is known for its chartreuse leaves with green stripes, which look absolutely beautiful in early summer and spring. The bamboo is partially deciduous even in mild winters. This is why it is mowed to the ground in spring by gardeners to maintain its attractiveness.

It is cold-hardy and survives up to 0° F, but some species can even survive the intense colds of Minnesota. The bottom side of the leaves of this bamboo is covered in fine hair. This makes the bamboo highly-resistant to bamboo mites. The plant spreads vigorously through underground rhizomes. They run along beneath the soil’s surface and produce small plantlets at the nodes. They are used to propagate new plants, but gardeners should be careful. If they aren’t removed properly, they can become invasive. 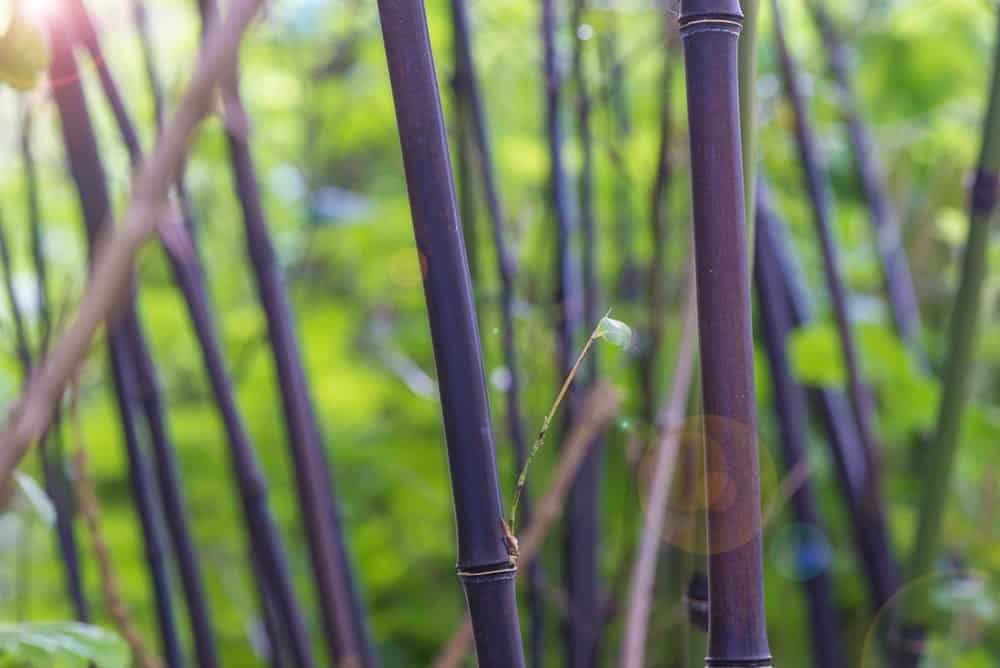 Phyllostachys is commonly known as Black Bamboo and belongs to the genus of Asian bamboo. It is native to southern and central China, as well as the Himalayas and northern Indochina regions. Some species have adapted and naturalized in Australia, America, southern Europe, and Asia.

The culm or stem of the black bamboo forms a prominent groove called sulcus. This runs along the length of each inter-node or segment of the bamboo. The black bamboo is identified by this unique feature since it helps the bamboo spread aggressively through underground rhizomes.

The species of Phyllostachys grows up to 30m or 100 feet tall if the conditions are optimal. The larger species of the black bamboo is known as timber bamboo since it is often used to make furniture and in construction. Other species are used as ornamental plants even though they are prone to cause trouble. They are an invasive species that need to be grown in containers or restricted artificially. Some species can also be grown as bonsai trees. 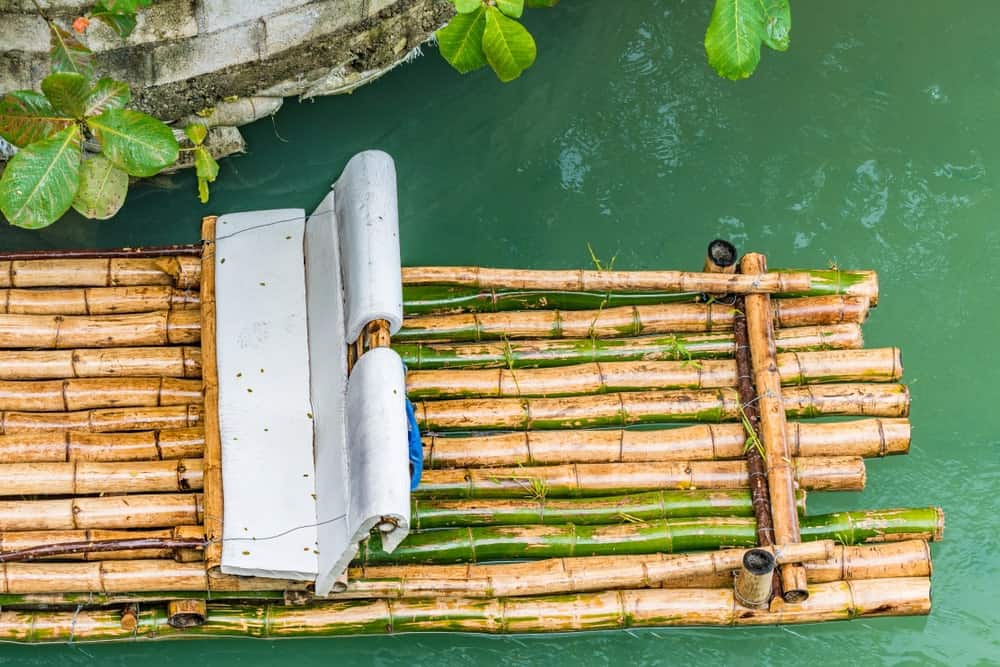 Arundinaria Gigantea has common names like Giant Cane and River Cane. It is native to the south-central and southeastern regions of the United States like Texas, Oklahoma, and Maryland. It has two main subspecies called the Arundinaria Gigantea and ssp. Gigante. The former is generally called the switch cane plant.

It grows in wet habitats and is a perennial grass type. The cane has a rounded, hollow stem which can grow up to 10m or 33 ft tall. It uses a large network of thick underground rhizomes to spread. It has lance-shaped leaves, and its inflorescence has panicles or racemes. A single individual cane can live for about a decade. It produces flowers and seeds irregularly, based on the conditions around it.

This River Cane Bamboo can be found in many different places since it grows in pine, oak, ash, cottonwood, and cypress forests. Many other plants like the creeping blueberry, wax myrtle, blue huckleberry, and more use it as a support system. The canes are found on pine barrens, savannas, pocosins, bogs, floodplains, riparian woods, and more. They are wildfire tolerant but easily flood.

The Cherokee have always used this species of bamboo for basketry, as well as maintain canebrakes through periodic burning and cutting. After the European settlement on their lands, the practice was halted which led to depletion of River Cane Bamboo numbers. This nearly led to the loss of the art of basket making, which is still an important part of the economy of the Cherokee people. It was also widely used by many indigenous people to make blowguns, bows, arrows, medicine, flutes, walls, candles, knives, tobacco pipes, sleeping mats, fish traps, and more.

Bamboo is a versatile plant that can be used to create a number of things and used for multiple purposes. It should be protected so that its numbers don’t deplete since many animals and habitats depend on the bamboo tree.

Return to all plants and flowers