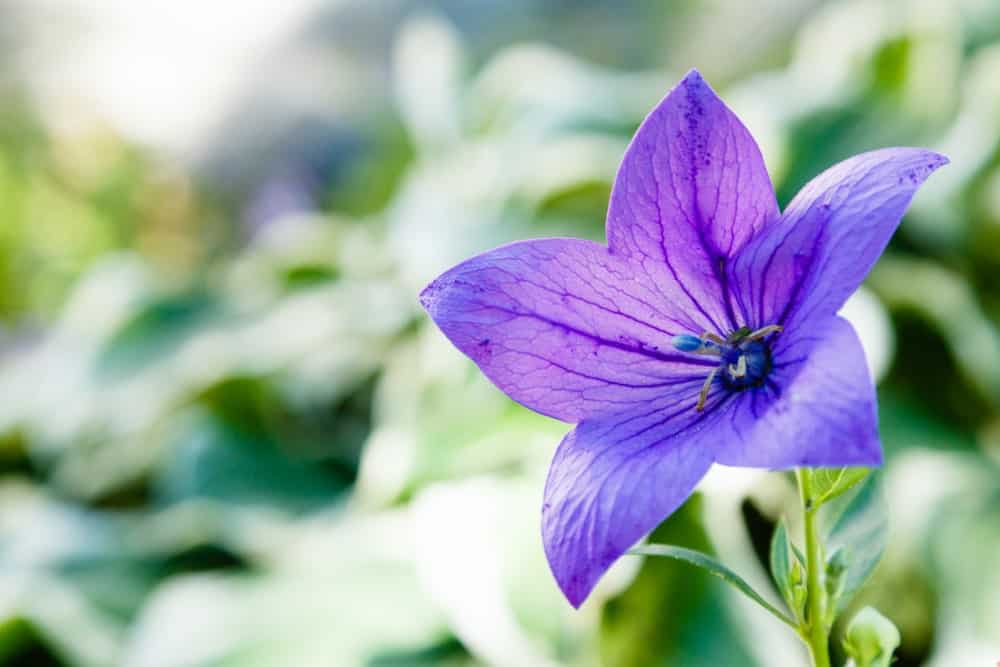 Balloon flowers belong to genus ‘Platycodon,’ and they are one of a kind: Unlike so many other genera of flower families, this one only has one species under its belt, the Platycodon grandiflorus. Despite being a single species, cultivars of balloon flowers are made to tweak their color and design to add to its aesthetic.

These beautiful, colorful, very useful flowers are also called Chinese bellflowers, and they belong to the bellflower family Campanulaceae native to East Asian countries, including China, Korea, and Japan. The flower is commonly termed the balloon flower because of its balloon-like bud structure.

For their simple five-pointed inflorescence, these flowers are a favorite as garden ornaments and are often found blooming in parks and flower beds. Although they are usually purple, they are often mixed with other species to produce several cultivars that can range from pink to white and blue. Even the simple star-like petal pattern can be changed into a complex ten-petal one producing ‘double’ varieties.

In its native lands, it is grown extensively for its famed medicinal properties that are said to treat respiratory diseases. Have a look at all the different cultivars that can be derived from the single bellflower species. 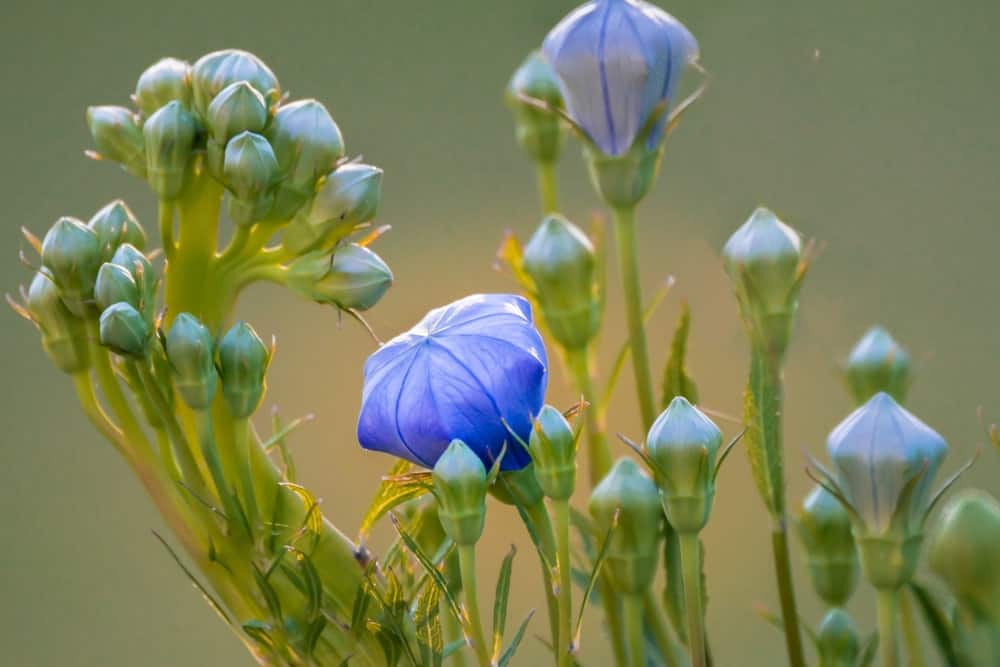 The flowers have five lobes that have a thick rubbery texture and are arranged in the shape of a star around another star-shaped filament arrangement. The seeds occur in a seed pot with five valves that open from the head, and the leaves are unstalked, becoming narrower as they proceed upwards. These plants form clumps on the ground, so they can also serve well as ground cover in flower beds. It is a perennial plant that can live for years on end.

The compounds and extracts yielded by this plant may have antimicrobial properties; they are also said to be anti-cancer, anti-allergenic, and anti-inflammatory amongst other things. Because of these extraordinary qualities, balloon flowers have long been used in Chinese and Korean traditional medicine.

In China, the bellflower is used as a cough suppressant, a treatment for sore throat and tonsillitis, and is often used to prevent allergies such as asthma. Colds and flues are other ailments that this plant is used for. In Koran medicine, the plant is considered a treatment for respiratory infections, tuberculosis, diabetes, and other inflammatory diseases.

In Art and Cultures

The star-like arrangement of the flower petals gives way to local folklore and superstition, while also adding to its symbolic value in arts and culture.

In Europe, it is said that the five points represent the five senses, and Greek philosophers deemed them a symbol for the five elements of the earth. In Japan, the flower appears as a symbol on the coat of arms of members from important families, while practitioners of Wiccan witchcraft see a pentagram in the flower and use it in rituals. The simple beauty of the flower makes it charming for every culture.

Doraji taryeong, a song derived from the locally found flower, is one of the most popular folk songs in both North and South Korea. It is also sung in China among the Korean descendants. Another song by the same name is known as Toraji in Japan.

The folk song originally came from the Hwanghae Province. However, the version currently sung is considered to be from the Gyeonggi Province since the rhythm and melody have tweaked to acquire different characteristics.

In popular culture, Platycodon is a symbol of friendship, and it can also symbolize eternal love and purity of spirit.

Source: The Joy of Plants

Called dojari in Korean language, the plant and its roots are used abundantly in cooking. It is the commonly occurring namul vegetable and a main ingredient in the dish bibimbap. Sometimes, balloon flowers are also added to rice to give it a sweet-smelling flavor.

The root is prepared by rubbing it with sea salt after soaking and washing it; this gets rid of the bitter taste that gave rise to myths about its toxicity.

Some desserts are also prepared with the help of bellflowers; one of the common ones in Korea is the doraji-jeonggwa. The flavorful root can also be used to infuse distilled alcohol called soju. Usually, unflavored hard alcohol is added that has a minimum 30% ABV as a base.

The flower and its roots have much nutritious value since they contain calcium, fiber, iron, proteins, and several minerals and vitamins. Its many analgesic, sedative, and fever-reducing properties also add to its value as a meal If taken regularly, ingesting the compounds from balloon flowers can help in maintaining blood pressure and boosting the immune system to protect against disease threats. This is especially useful for people with weakened immune systems such as old people and children. 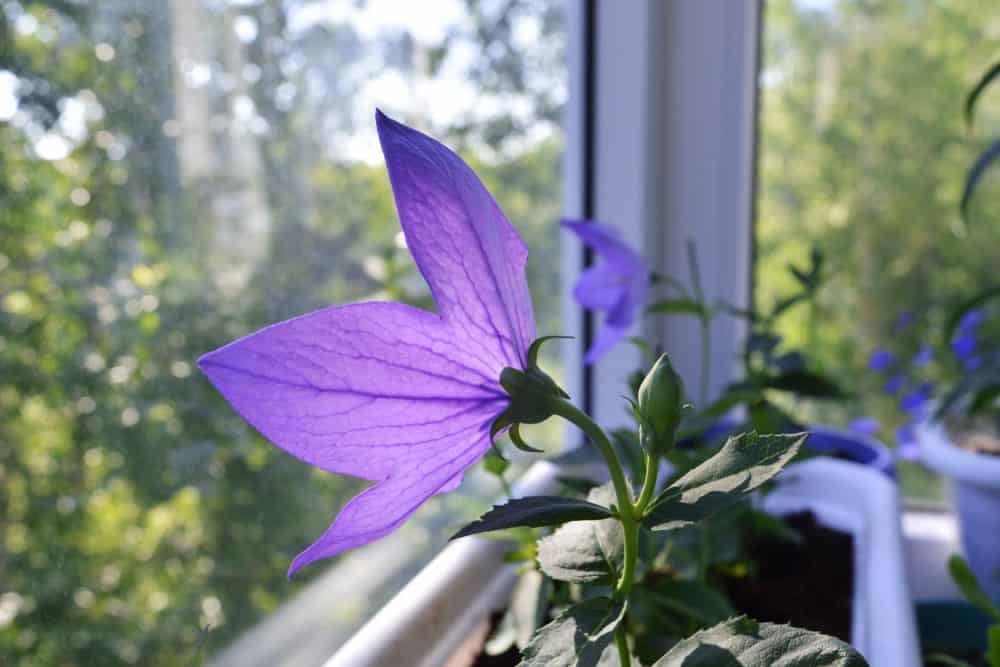 If you plan on growing these fun flowers in your garden, the seeds need to be directly sown in the soil during the early spring months. The seeds may or may not be kept covered; you need only dampen the area of plantation, and within a couple of weeks, a sprout will be visible. You should spread them out to about a foot apart, and if you are lucky, you should have flowers greeting you within the season.

To grow well, balloon flowers need plenty of light, but can grow sufficiently well in partial shade. The soil requirements are not many, but a slightly acidic soil is preferred. The plants will not need too much watering and can even manage short periods of drought.

Along with the ease with which they grow, the plants are easy to cater to and require minimal upkeep. If a mild fertilizer is added at the beginning of the season, only regular watering will be needed for them to thrive throughout. Sit back, and enjoy your plant slowly flower and blossom before summer is over.

The cultivars usually change in ornamental characteristics but can also sometimes switch other traits. There have been botanical studies comparing the different types of cultivars, their sustainability, and their popularity.

The cultivars are available in other colors, double flowers, and shorter stemmed varieties. They can range from blue and pink to white, and can be cultivated to be as small as 6 inches high, and as tall as 24 inches. Here are some common varieties of the species. 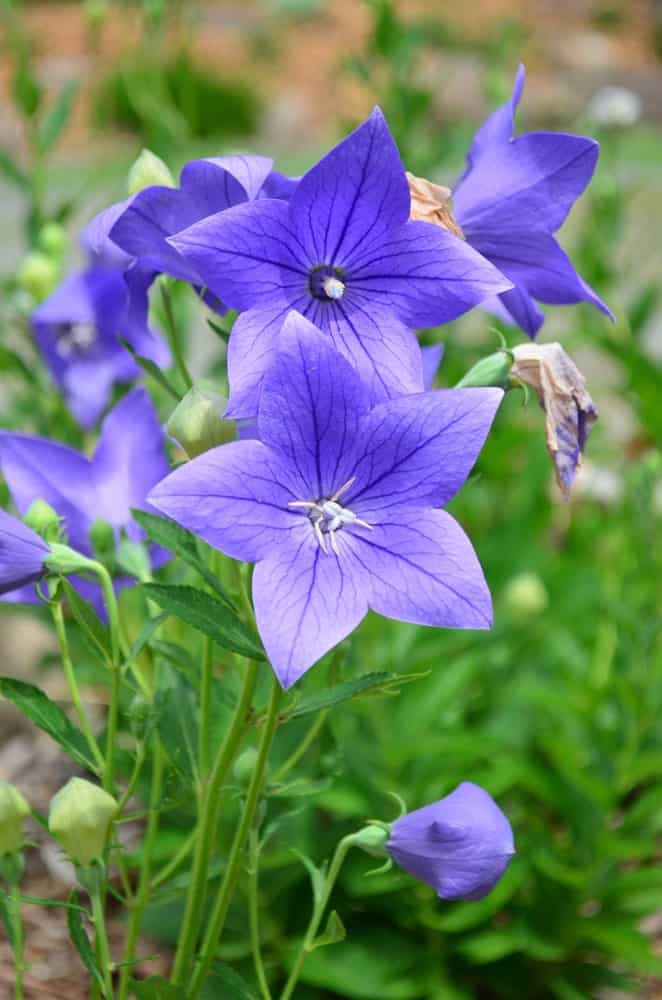 The ‘Fuji Blue’ variety of the Platycodon species is a reliable bloomer that is free from pests and diseases. Despite its name, it is vaguely purple in color and a bit transparent, which makes the petals more textured. This variety is cultivated usually because of its pest-free nature instead of its aesthetic, and it is the most commonly found one in gardens and flower beds. 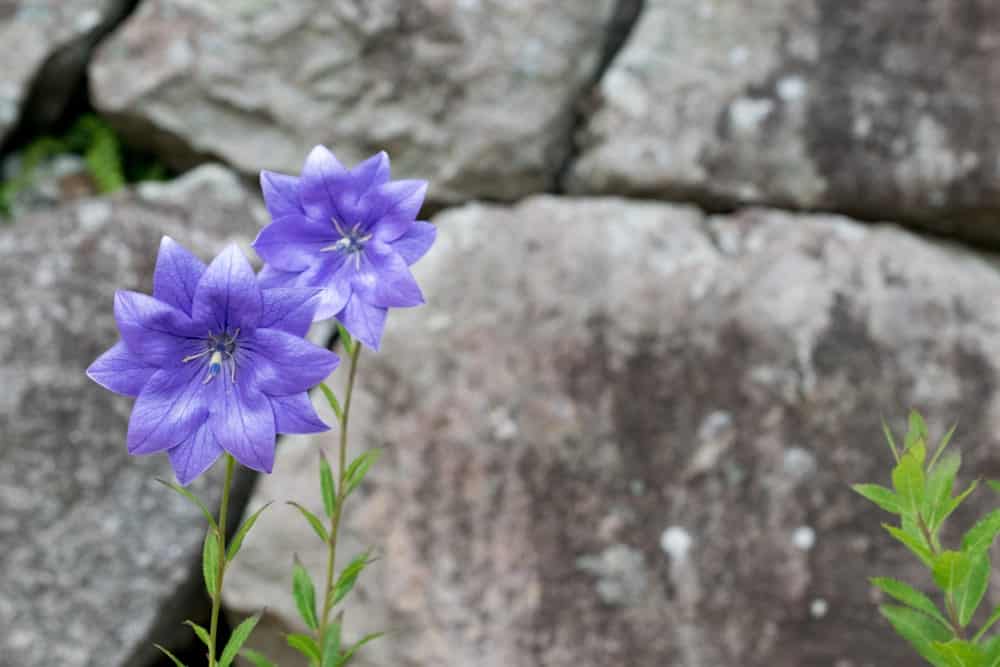 ‘Double Blue’ cultivar of Platycodon grandiflorus is a tall stemmed flower with double the violet-blue petals. The flower still has the trademark balloon-shaped buds of genus Platycodon.

The plant can grow up to 24 or 30 inches in height and can be paired with other perennial flowers to create a beautiful ornamental flower bed. Other flowers that can accompany it are baby’s breath, sedum, and other drought-tolerant species. 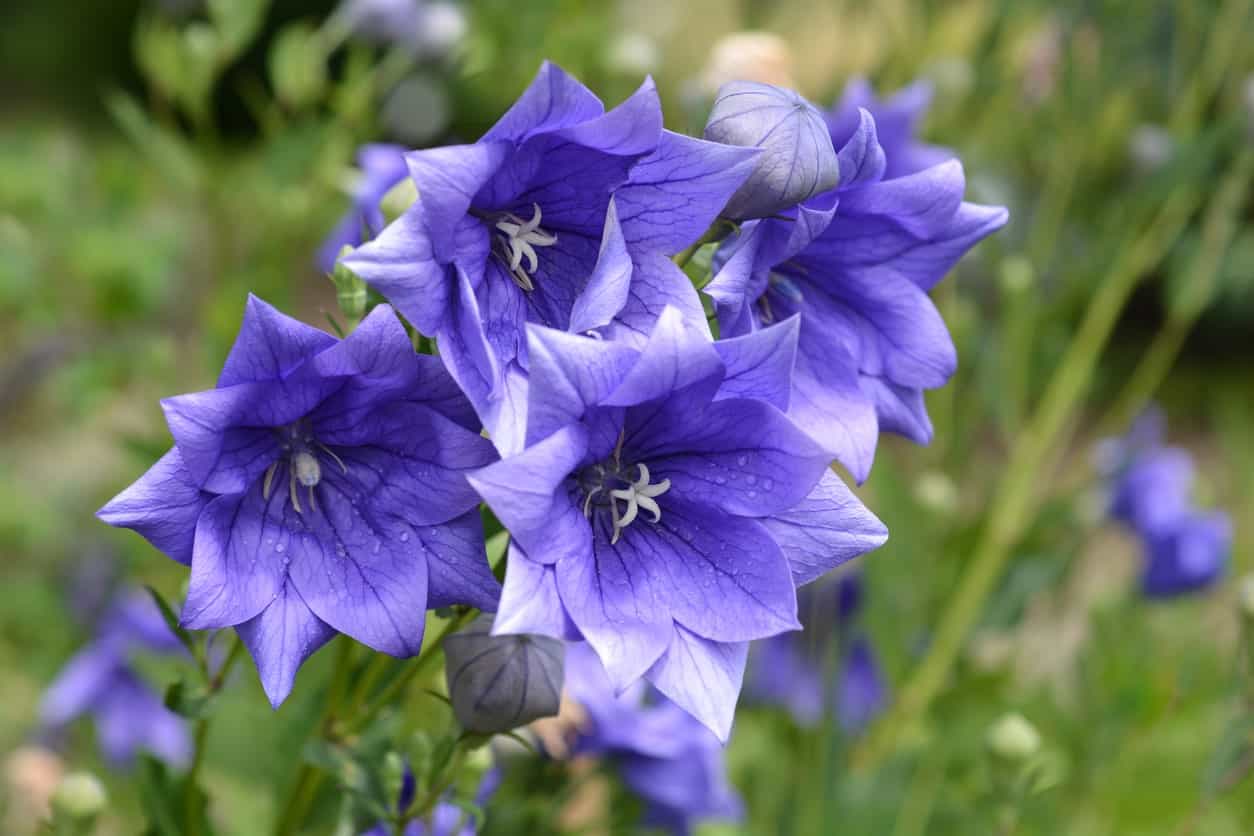 These double varieties of the plant are developed by cross-breeding two different kinds of balloon flowers together to create a complex inflorescence comprising of ten petals instead of five.

‘Hakone Blue’ variety has bright blue double flowers that can grow alone or in clusters on top of stems. The plant grows to be about 18-24 inches tall. The leaves are lance-shaped, and the flowers bloom throughout the summer with minimal upkeep. 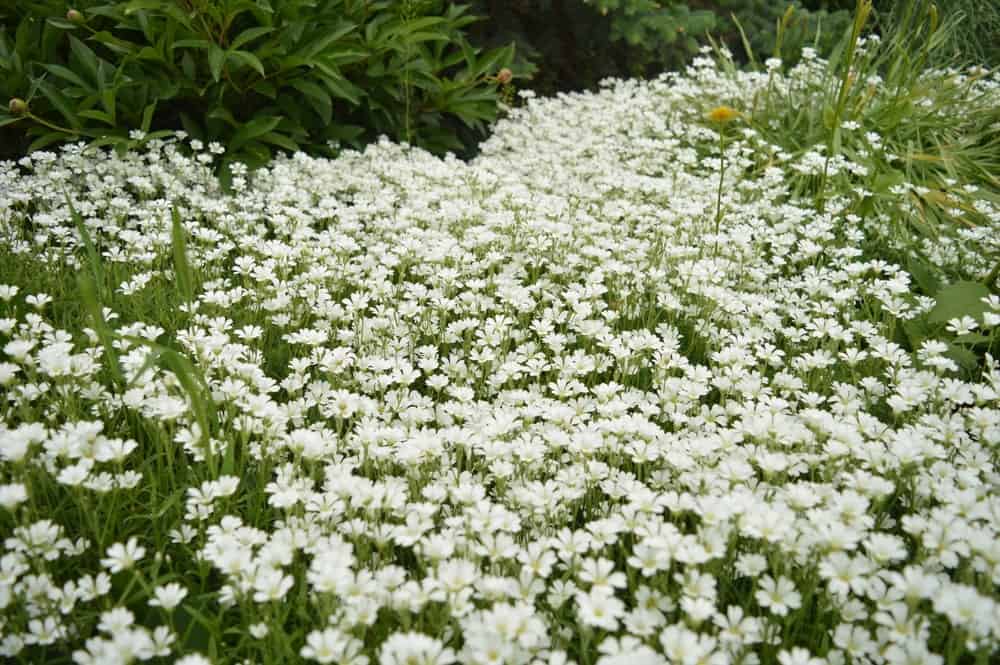 These flowers are similar to the Hakone blue, but because of being cross-bred with other species, their color is pure, shiny white, although their buds are distinctly blue. These are double flowers that can survive quite well in warm weathers but cannot stand a frost. It can be planted in gardens, but also does well as an indoor plant. 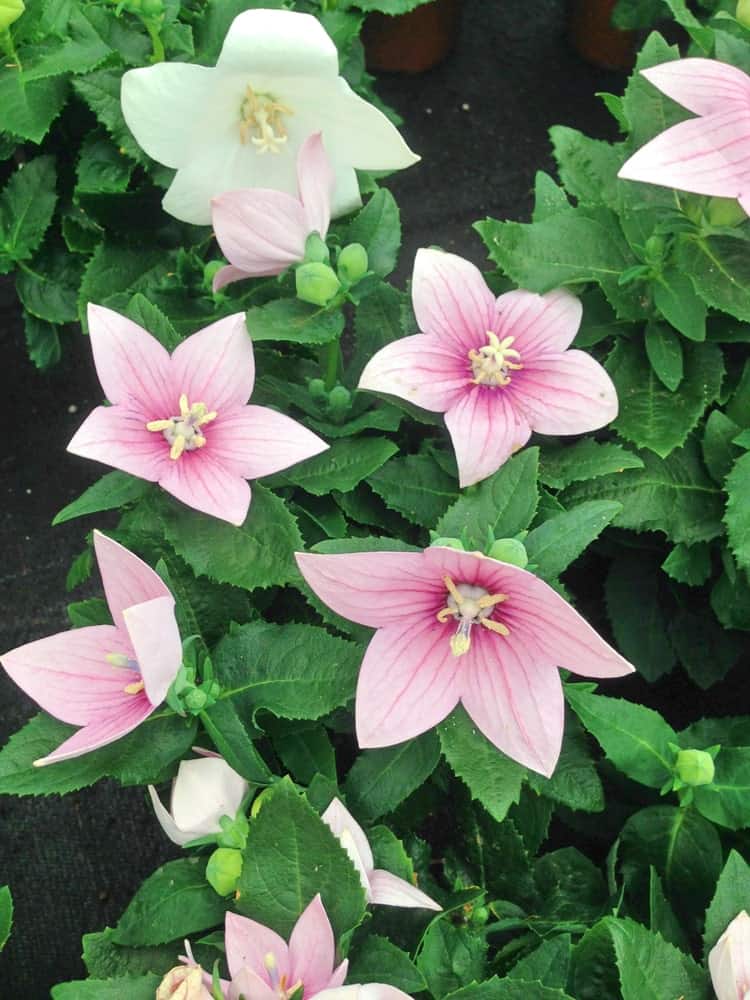 ‘Mother of Pearl,’ also known as ‘Perlmutterschale, is a rare variation of Platycodon grandiflorus. It is a pink balloon flower with large, pale pink flowers and deeper tinged pink veins. The bushy plants flower very quickly and throughout the summer, and the long-stemmed flowers are great for pruning and cutting.

Once established in their soil, balloon flowers are live long and are reliable perennials. If planted early, they can even bloom in the first year. The plant is deer resistant and grows well in most warm climates.

The height goes up to 24 inches, and the spacing between plants should be a minimum of 12 to optimize and promote growth. When planting, make sure to barely cover the seeds with soil and allow them some full sun, and some partial shade. 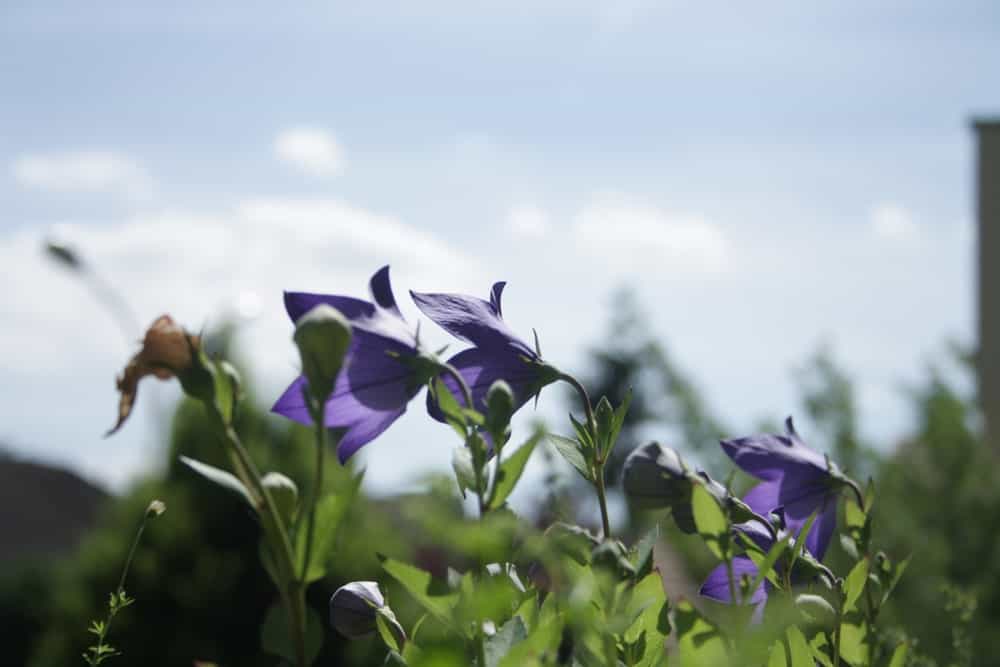 Growing to be about 6-12 inches tall, the ‘sentimental blue’ plant is a dwarf variety. It is herbaceous and perennial like all Platycodon plants, and produces several vibrant blue flowers that are about 3 inches across. It blooms for most of the summer months. 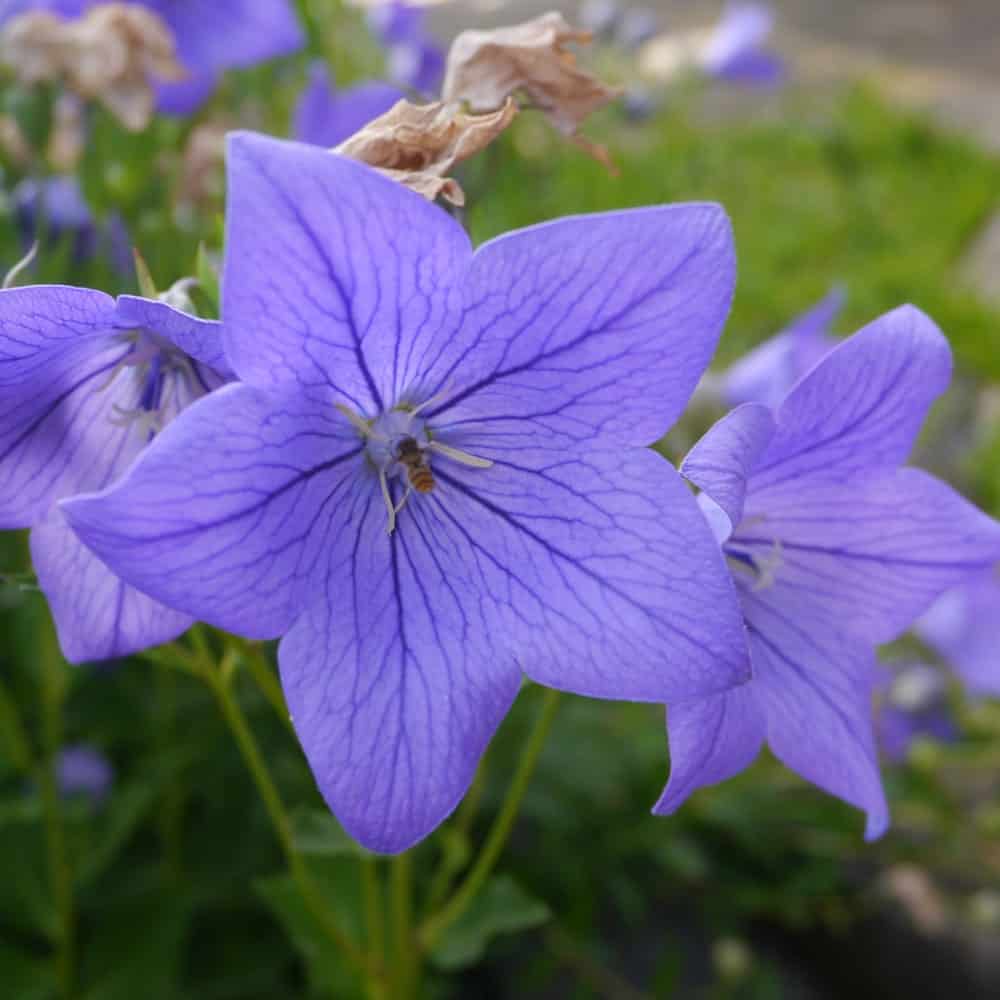 The Apoyama is an erect, clump-forming perennial that has very thick roots and ovate, toothed leaves. It is widely used as a condiment in Japanese food and is one of the seven special herbs that are used to prepare sake, a Japanese alcoholic beverage.

The succulent roots are cut up and added to salads and soups, used as tonic vegetables, peeled and pickled, and sometimes even preserved in a sugary syrup. 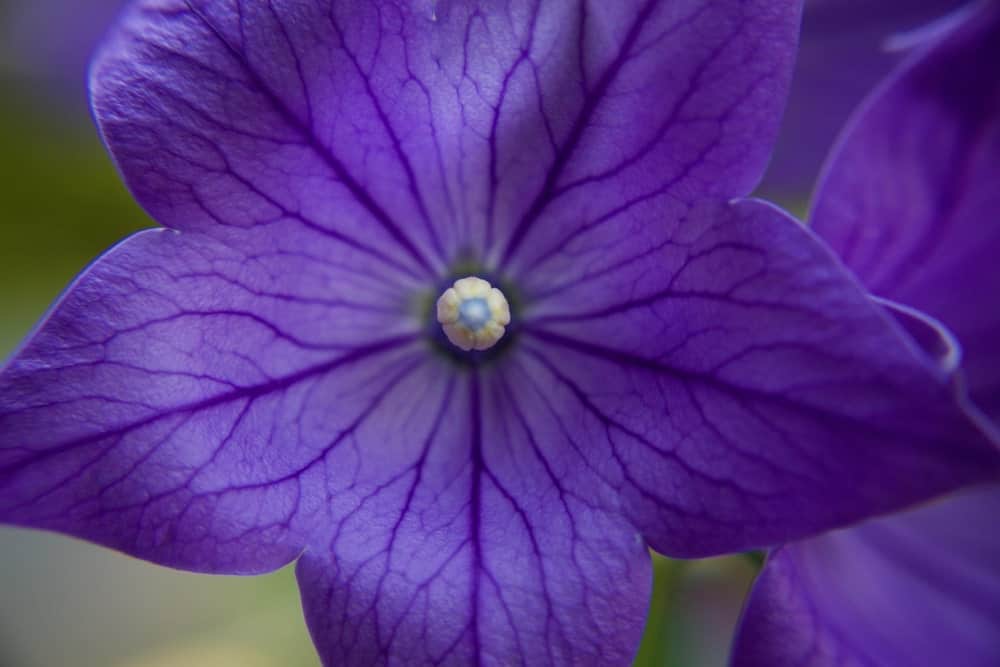 The ‘Misato Purple’ Platycodon flower is an exciting dwarf form of this reliable plant. The plant originates from East Asia, but this variety, in particular, is well suited to North American gardens,

The Misato Purple flower is a deeper purple than other varieties and is rather late to bloom in spring. The process of cultivation, however, is relatively easier than growing other plants and blooms stronger in the summer. It is usually happy in any well-drained soil but prefers loam. The flowers are aesthetically pleasing and gratifying to grow. 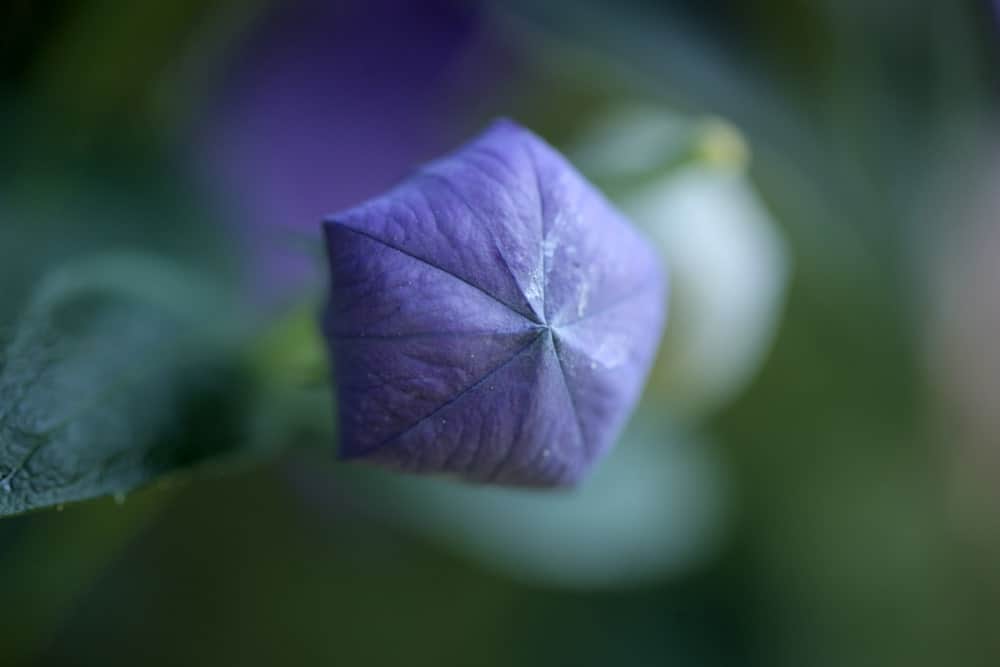 The Komachi variety is a specially designed cultivar. In a most interesting genetic variation, Komachi flowers have dark blue buds that never open – even when blooming. The flowers stay in a perpetual balloon form and make a satisfying popping sound when pressed.

The soil, water, and sun needs are similar to other cultivars, and it is also deer resistant and perennial. 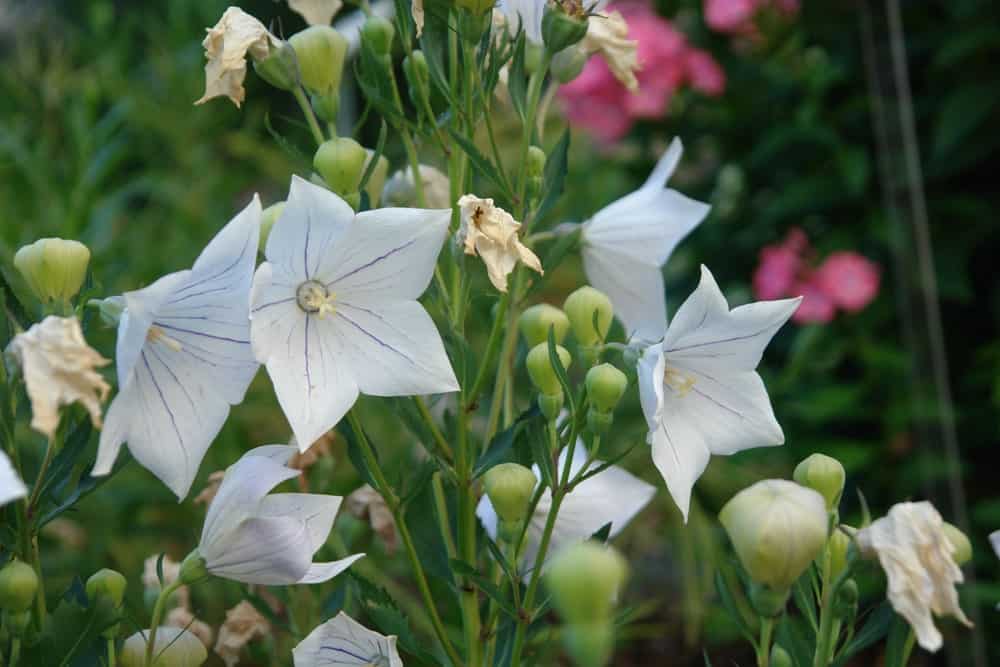 ‘Fairy Snow’ is a dwarf variety of the species that has white flowers, 1.5 inches in diameter. The flowers have bluish veins inside that are clearly visible; they appear either alone, or in small clusters at the ends of stems. The dwarf plant grows to be about 6-10 inches tall. The leaves are dentate and lance-shaped, and the plant blooms at an extended length of time.

Even though the medicinal and nutritional uses of the plant and its flowers are not as well known in this part of the world, their ornamental beauty and ease of care have motivated several homeowners to plant them. In their various colors and forms, these striking flowers can provide you with an instant feeling of gratification whenever glanced at. Hope you will want to buy some seeds this coming spring!