Take a closer look on the asparagus and discover its different types, see pictures, and gain more understanding about each type's distinctions and where you can possibly find them. 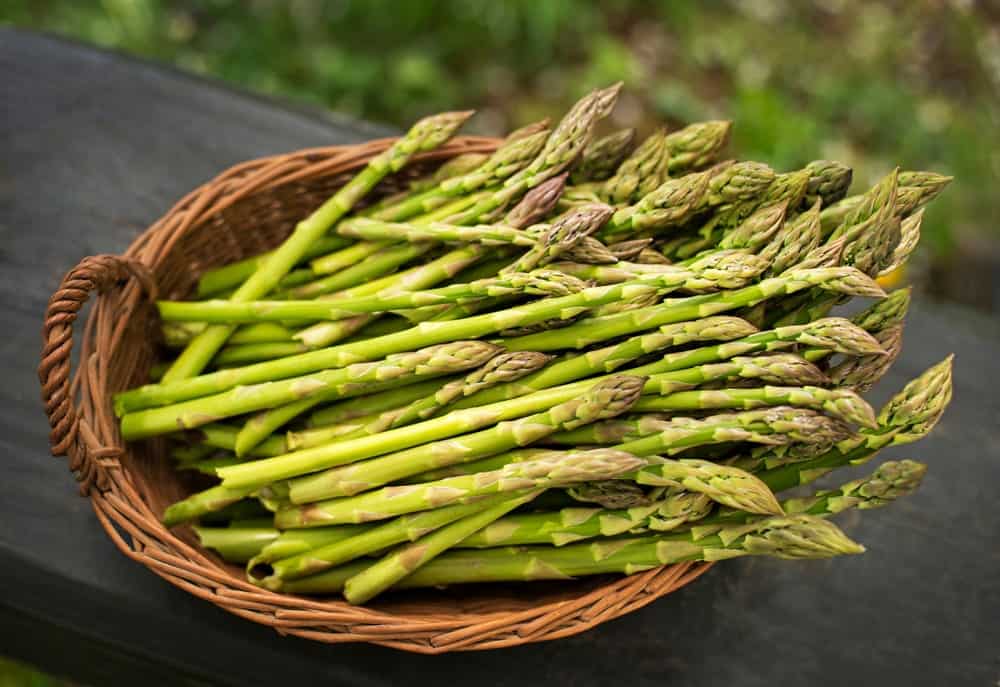 Asparagus is a flowering herbaceous perennial plant that belongs to the Asparagaceae family. It is also a distant cousin of the onion and considered a part of the lilaceae family. It originated in Europe, North Africa, and West Asia and has been consumed for more than 2,000 years.

It’s popular in ancient Egypt as evidenced by a number of tombs with walls decorated with a bunch of asparaguses. The ancient Greek doctor, Hippocrates, used the plant to treat diarrhea and pains of the urethra while another Greek doctor, Dioscorides, recommended it to treat kidney problems, sciatica, and jaundice.

The fastest Roman athletes were known to carry asparagus toward the Alps to preserve them while Emperor Augustus created the so-called Asparagus Fleet for bringing the best asparagus finds to Rome.

The Frenchmen also cultivated asparagus in their greenhouses to ensure its year-round supply since it’s King Louis XIV’s favorite type of food.

Asparagus can now be found all over the world. China is the world’s largest asparagus producer with nearly 7 million tons each year.

Related: How to Store Asparagus | Side Dishes for Ham | What to Serve with Shepherd’s Pie | Vegetables and Herbs for Symbiotic Farming | Broccoli Alternatives 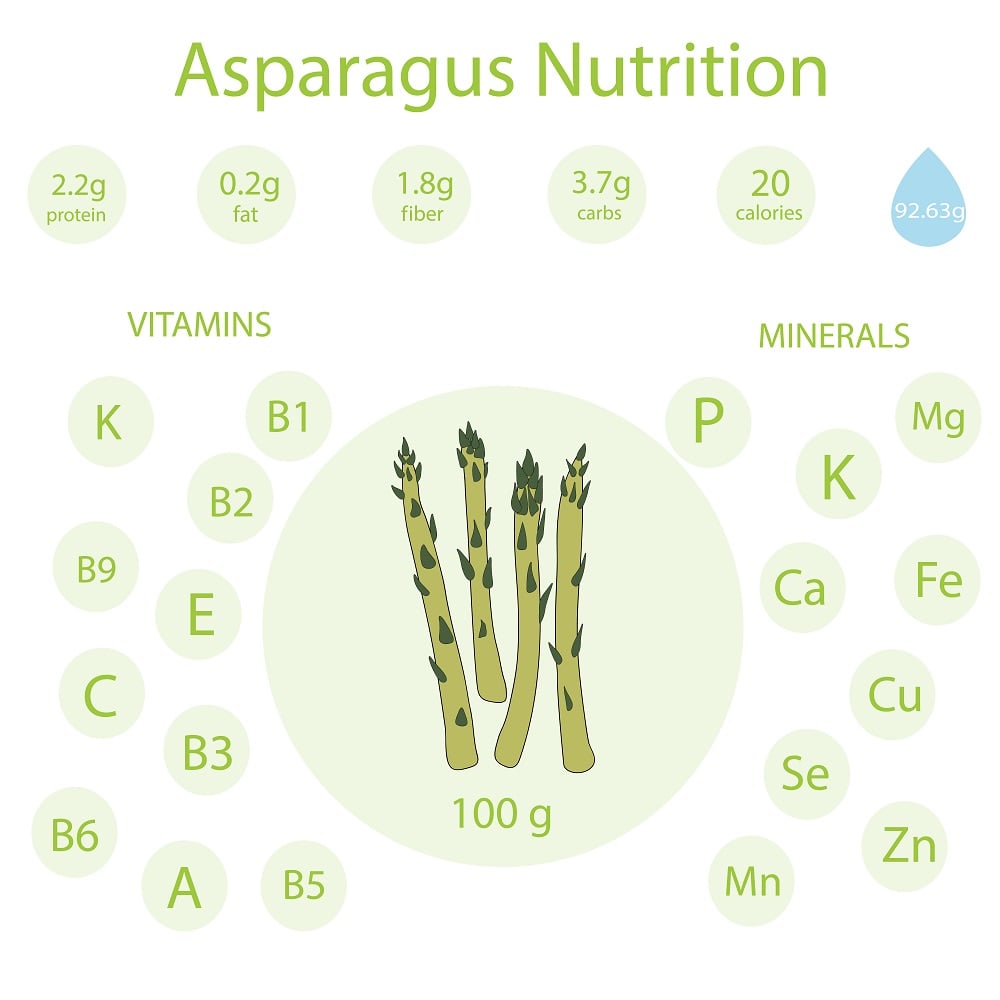 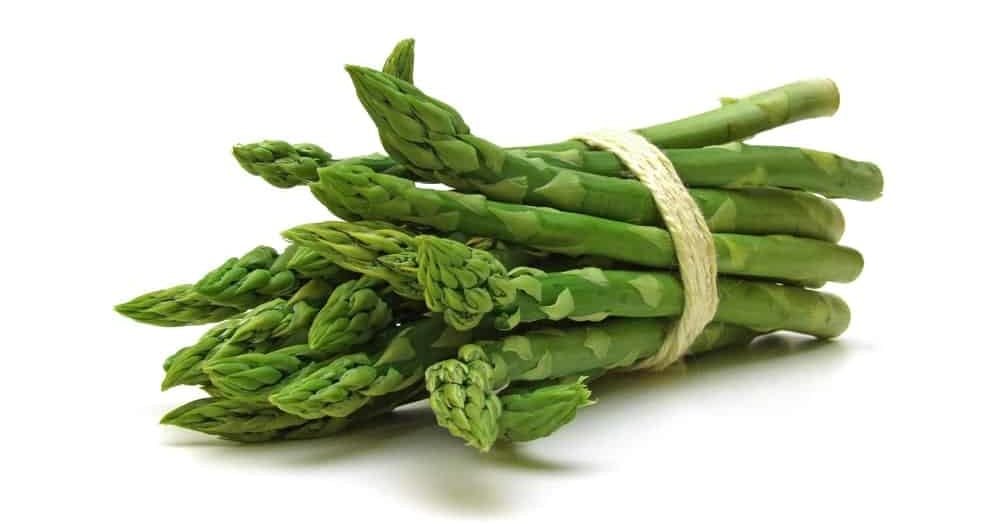 Green asparagus is inarguably the most common type of asparagus found in most supermarket produce departments. When you cook it, the color becomes even brighter and greener and its texture is crisp yet tender. Although many people believe that thinner and younger asparagus is more tender, it is actually just the opposite. When you choose thicker asparagus, the texture will be even more tender because asparagus has a fixed set of fibers that aren’t as obvious in thicker spears. 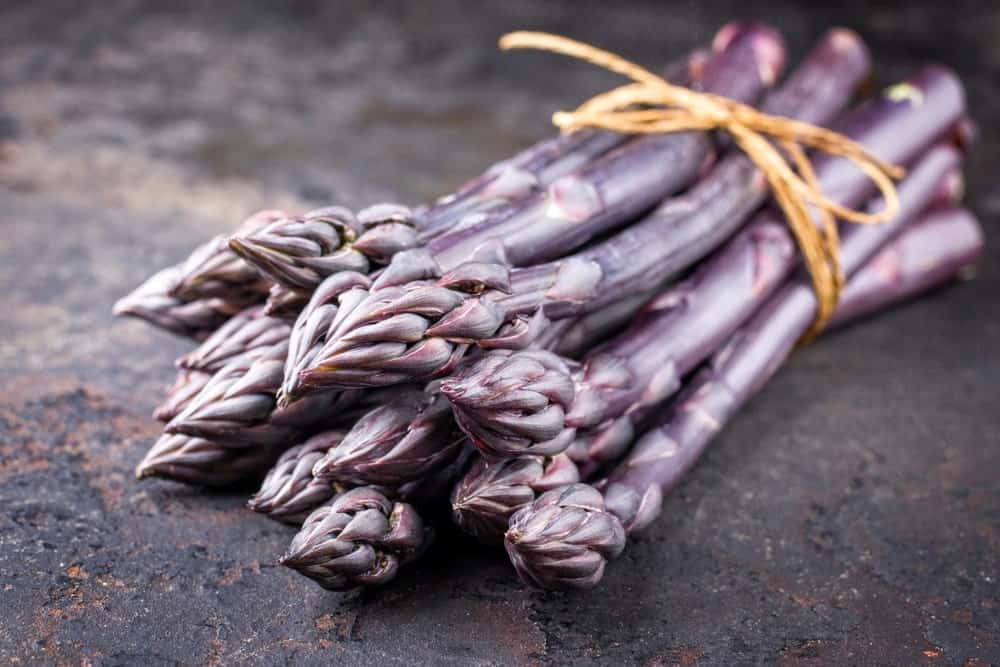 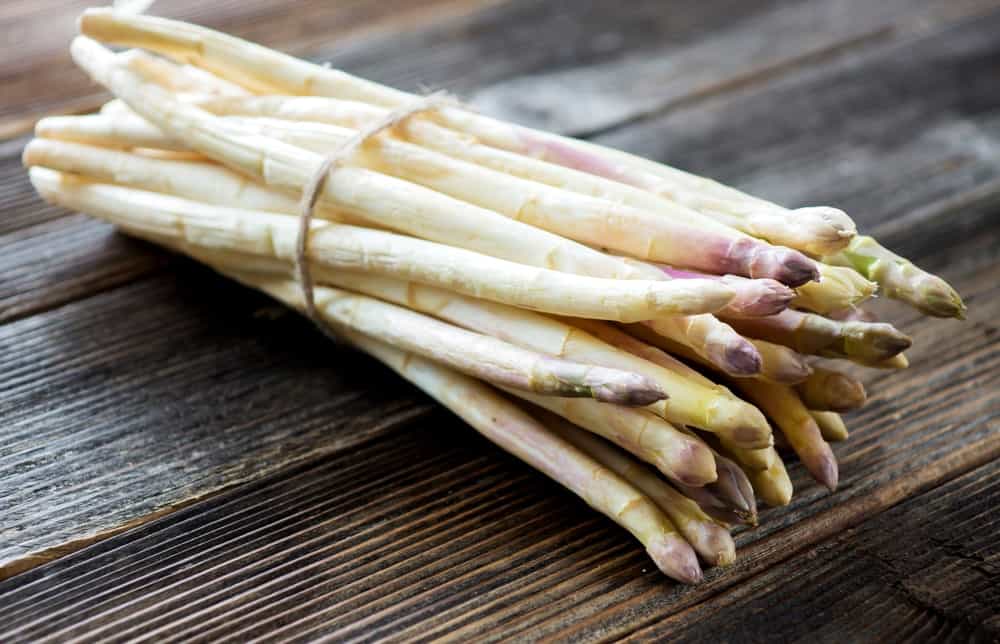 Because of this and a few other factors, white asparagus can be quite expensive — up to double the amount you pay for other types of asparagus — and it is actually considered a delicacy in Europe. Another reason for its high cost is the fact that it costs a lot of money just to produce it, which has to be passed on to consumers. 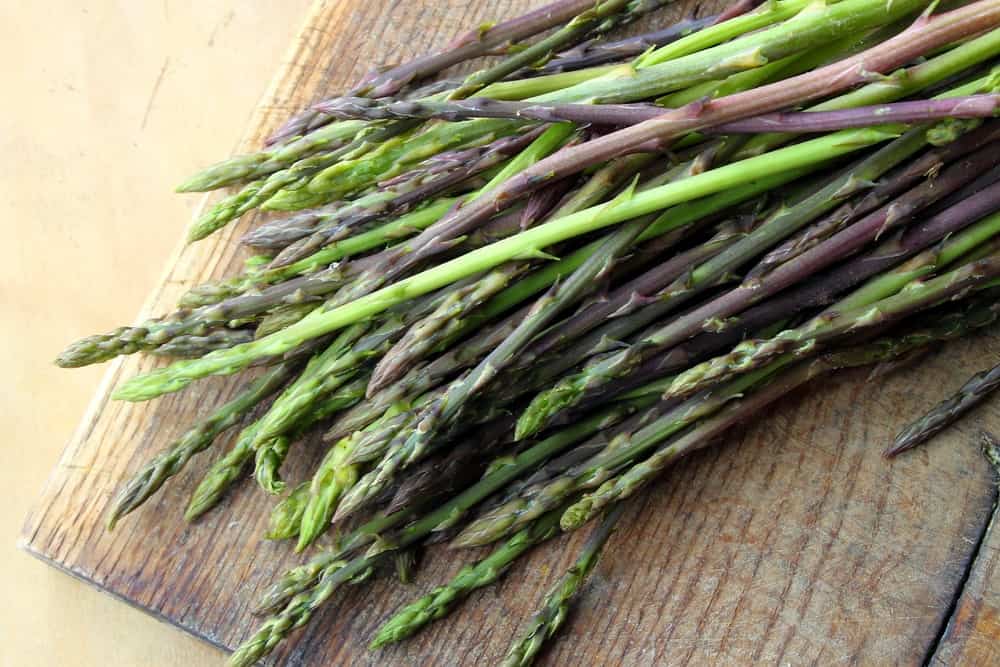 As its name suggests, this type of asparagus grows in the wild and is easy to find if you know where to look. It is longer and thinner than its cultivated cousins and has a more delicate taste as well. Wild asparagus can usually be harvested in early spring and it is found frequently in western Europe and Great Britain, mostly on coastal dunes and cliffs as well as open grassy areas near seas.

If you can spot the yellow growth somewhere in the fall, you can go back in the spring and look for spears that will likely be growing by then. The wild asparagus bush usually gets to around three feet in length and it has thorns that are green and sharp but also soft. Because of this, it is not normally necessary to wear gloves when you’re picking wild asparagus plants.

The Apollo asparagus yields a large crop and blooms earlier than many other types of asparagus. Their stalks are medium to large in diameter and they have tints of purple at the very tips. With a smooth appearance and nice, even stalks, this type of asparagus is dark green in color and does best in either warm or cool climates. Very resistant to both rust and fusarium, the Apollo asparagus is great for a variety of purposes, including freezing, serving fresh, and processing.

The Atlas asparagus is resistant to most diseases that affect asparagus plants and it does very well in hot climates. It also produces a large crop and is very sturdy. It has dark-green spears with a little bit of purple on the bud scales and it has an especially high tolerance to fusarium.

It can grow in both cool and warm climates as long as it is exposed to at least six hours of sunlight a day and it is drought-tolerant. The plant itself can grow up to five feet tall while the asparagus itself can get to roughly nine inches in length. It also grows in most climates from 45ᵒ to 85ᵒ Fahrenheit and it can even tolerate frost.

The Jersey Series asparagus is a hybrid variety of all-male plants and includes Jersey Giant, Jersey Knight, and Jersey Supreme. The Jersey Giant is hardy and does well in most climates, including chilly and cool ones. It usually grows between seven and nine inches long and is very meaty and tasty. Their spears are very thick and they are a perennial plant so you can enjoy them for many years to come. They usually mature in late spring in most climates and they do best if you live in zones 4-6.

The Jersey Knight is resistant to many diseases including rust, crown rot, and fusarium wilt, among others. It is also a very sturdy type of asparagus. Best if grown in zones 3-10, this type of asparagus does well even in cold climates and is high in vitamins A, B6, and C.

The Jersey Supreme, a fairly new variety, is also resistant to disease and produces a little earlier than the Knight or Giant does. It is also a great choice if your soil is sandy. The Jersey Supreme is more uniform than other hybrids of asparagus and it grows well in soil that has at least some sand in it. It is resistant to rust and fusarium wilt and it does best in growing zones 3-8. It also tends to grow larger crops the older it is; by the fourth season, you should see a very large and full crop.

For more than one hundred years, the Mary Washington type of asparagus has been very popular in the United States. They have a delicious flavor and have deep-green spears with tips of a light purple. It is a traditional form of asparagus that grows long and uniformly.

The Mary Washington asparagus is an heirloom variety that is a perennial plant and it does best in growing zones 3-8. Their graceful foliage is also quite attractive and is a feathery green color. The asparagus itself gets to roughly eight inches while the plant can grow up to seven feet tall. They also prefer full or partial sun.

This type of asparagus is especially popular in Europe, where it originated. It is light green with rosy pink tips and it is an heirloom variety with a very sweet taste. The name of the asparagus means in part “early” so if you aren’t very patient, you won’t have to wait very long for this type of asparagus to be harvested from your garden.

It became popular in France and it has a whitish-green color with hints of light pink throughout. It prefers full sun and the plant itself can get up to three feet in height. It also does best in growing zones 5-8. The Precoce D’Argenteuil asparagus is tender and very tasty. It starts to thrive in its second year after planting.

Consisting of both male and female plants, the Purple Passion asparagus actually gets lighter in color when you cook it. It has excellent flavor and does best when grown in zones 3-8. With a distinct flavor and tenderness, this type of asparagus is also great if you need to freeze it for any reason.

In addition, the Purple Passion asparagus is one of the most tender and tastiest types of asparagus, much more so than many of the green varieties, which is one of the reasons why it is great for both salads and for cooking.

The UC 157 asparagus is hybrid asparagus that does very well in warmer climates. It is pale green in color and very resistant to various diseases. It is also both a male and a female plant. This type of asparagus was developed in 1978 and is one of the most popular types of asparagus, if not the most common.

Tolerant of rust and fusarium, the UC 157 asparagus is uniform in both size and color and it is a perfect type of asparagus to grow commercially because of its high yields. Growing well in all growing zones, the plant itself gets to roughly three to four feet in size when fully mature, including the actual vegetable, and it is often found in farmers’ markets and other local markets.

The Viking KB3 asparagus is a fairly new variety and combines both male and female plants. It is a sturdy plant that produces large crops and it is a very tasty vegetable that can be harvested early. It can grow in most types of climates and it can be harvested once the stalks are pencil-thin. The stalks themselves grow to approximately ten inches long and they are very meaty and yummy. It is a type of herb that is very easy to cultivate and it is also a type of Mary Washington asparagus.