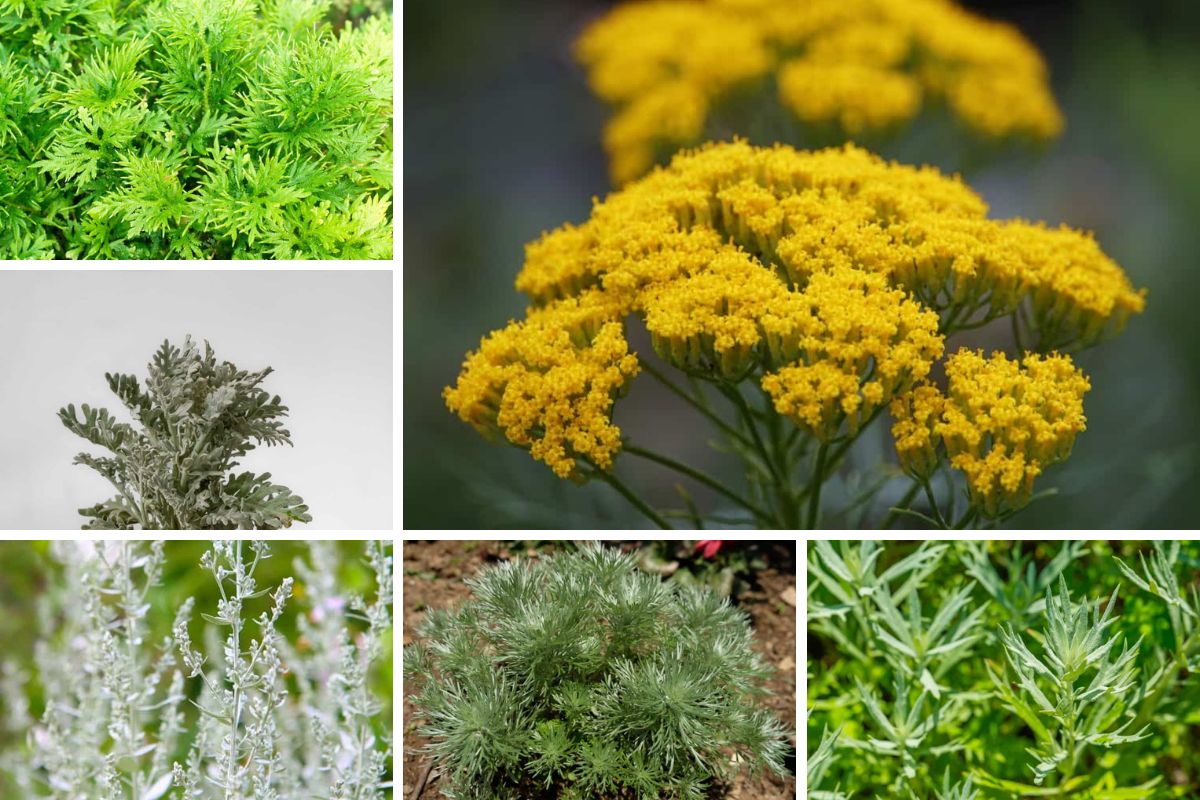 Artemisia is a diverse genus that comprises mostly of perennial and aromatic shrubs and herbs. Artemisia comes under the daisy family, Asteraceae, members of which are characterized by small flower heads and alternate leaves.

The genus Artemisia has about 200 to 400 species. It consists of hardy plants that are rich in volatile oils.

The plants in this genus range from tall shrubs to dwarf herbaceous plants. All members of this genus have alternative leaves small capitula, and tubular florets.

They occur as racemose, pendant, paniculate, or capitate inflorescences. Rarely do they occur solitary.

The leaves of Artemisia are fern-like and are covered with white hair. Artemisias are found growing in temperate climates of Southern Hemisphere and Northern Hemisphere.

They are commonly found in areas where there is a dry or semi-dry climate. Artemisia offers a huge variety of herbs for herb lovers.

They make outstanding ornamentals for the gardens and are also mainstays for craft shops. Artemisia species make beautiful herb gardens with their attractive foliage.

Although there are so many varieties of Artemisia, most of them do not have any showy flowers. Most of the species in the genus Artemisia have white or yellow colored flowers except for some exceptions.

Artemisia genus consists of plants that are annuals, biennials, and perennials. Many species of Artemisia are woody or semi-woody.

Some species are invasive, have creeping rootstocks. They have superb foliage that comes in numerous shapes like ferny, lobed, delicately lacy, or broadly strap-shaped.

The colors of the foliage range from dark green to silver and grays, at times, sparkling white as well. The species with green foliage have smoother leaves while the gray species have woolly, hairy, or felted leaves.

Some of the most popular types of Artemisias have been listed down below. Some of the Artemisia species are ornamentals while some have traditional herbal uses. 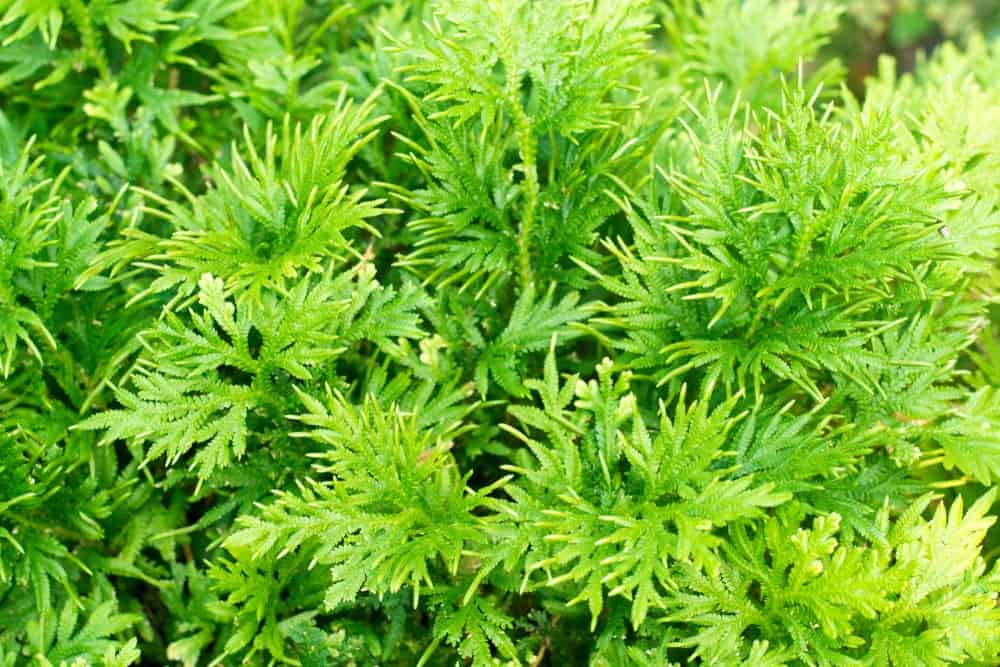 Southernwood is a sturdy shrublet that is native to southern Europe. They usually grow up to 3 feet or taller.

The stems are yellowish-green and have an upright habit of growth. Southernwood has gray-green, aromatic leaves which are finely dissected into segments that are threadlike.

The leaves remain fresh throughout the summer season. Its shapeliness can be maintained by pruning the plants hard in spring.

They can be trained to form a low hedge. Flowers of Southernwood are yellow-white in the color that blooms from late summer to fall.

They grow in loose panicles. The flowers are small, nodding and inconspicuous. Southernwood can be propagated by layering.

The branch is pinned down and covered with soil. When the formations of roots begin, the rooted part is severed from the mother plant.

The new plant is left undisturbed after the procedure until next spring, after which the plant can be moved to another location.

It attracts spittlebugs and tiny insects whose larvae reside in froth globs that are attached to the leaves of Southernwood, from where they feed on plant juices.

Southernwood is used as a filler in bouquets and in dried arrangements. It has a pungent aroma, similar to the sage that makes it a significant constituent of moth repellents. 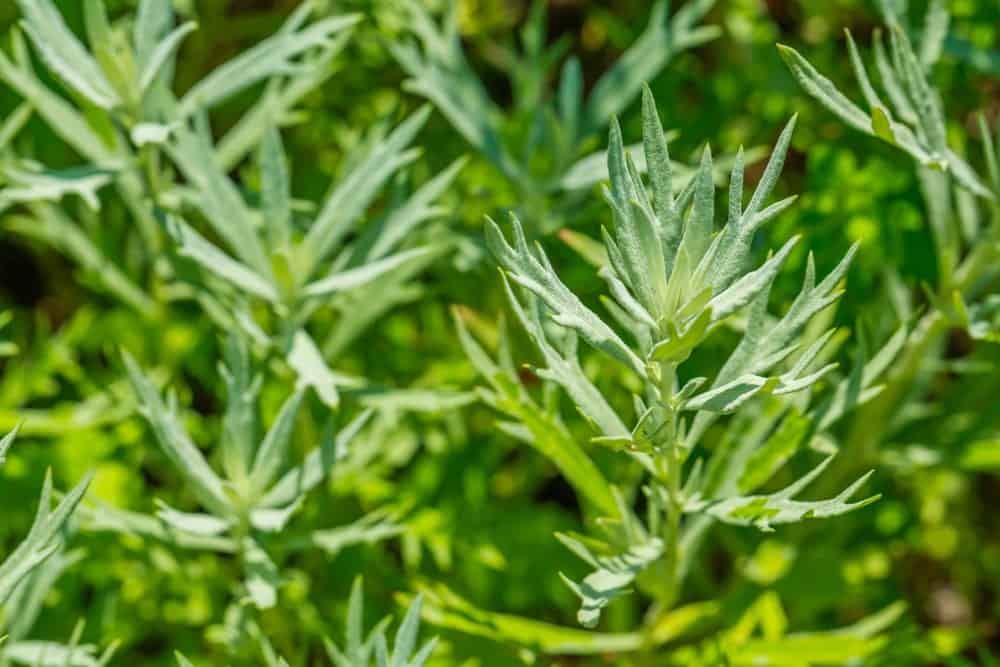 Wormwood is native to temperature North Africa and Eurasia. This type of Artemisia grows 2 to 4 feet tall. It has gray-green leaves that have a silky texture. The leaves are cut like that of carrot.

It is well known for its anthelmintic character (a potent vermifuge) and as an important ingredient of absinthe liqueur. Although its leaves have a bitter taste, slugs still feed on them.

Wormwood flowers are pale yellow in color. they are tubular and are clustered in spherical heads that are bent down.

These spherical flower-heads are clustered in branches panicles that are leafy. The flowers bloom from early summer to early autumn.

Lambrook Silver is a cultivar of common Wormwood that is silver. It grows to a height of 3 feet. It is extremely beautiful. It can be planted in front of a red brick wall or adjacent to plants that have red foliage to make a breathtaking sight.

Powis Castle is another cultivar of Wormwood that has silver colored, feathery leaves. Its leaves are finer as compared to Wormwood.

Powis Castle is most probably a hybrid between latter species of Wormwood (Artemisia absinthium) and Artemisia arborescens, which is evergreen Mediterranean species.

It is not hardy beyond zone 6 but it can be wintered indoors. Wormwood has a history if being used as a medicinal herb.

It is poisonous in large quantities. It can cause convulsions, insomnia, and nervous disorders even in small quantities.

This is due to the presence of thujone which is a brain stimulant, causing toxicity in excess. The smell of Wormwood is strong enough to onset headaches and nervousness. 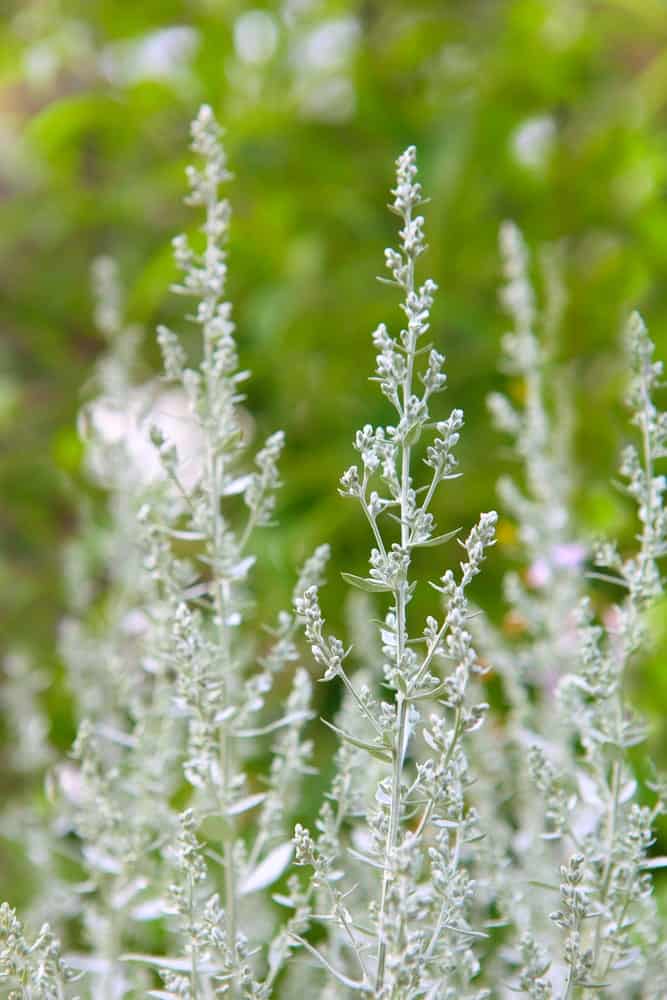 Western Mugwort is native to American West. It has erect stems and grows up to 3 feet in height.

Its cultivars have silver leaves that make it valuable for dried arrangements and wreaths. They look stunning with pink colored flowers. their silver foliage is what makes them so popular.

Silver King is one of the cultivars of Western Mugwort. Upper stems have narrow leaves that are quite pale while the leaves on the lower part of the stems are more jagged and broader.

Silver Queen is a grayer cultivar of Western Mugwort. Its leaves are broader than the Silver King.

Valerie Finnis is another cultivar that is less known to herb growers. It is more elegant and neat than Silver King and Silver Queen. It is an upright plant which has leaves that are green-gray on the top and white on the lower side.

The leaves that are lower on the stems are slightly woolly and greener in color. The flowers of Western Mugwort are insignificant. They are used as ornamentals because of their sparkling, silver leaves.

Western Mugwort is a low maintenance plant that requires full sun for proper growth. It grows best in areas where the soil is sandy and well-drained. Their water requirements are low to medium. 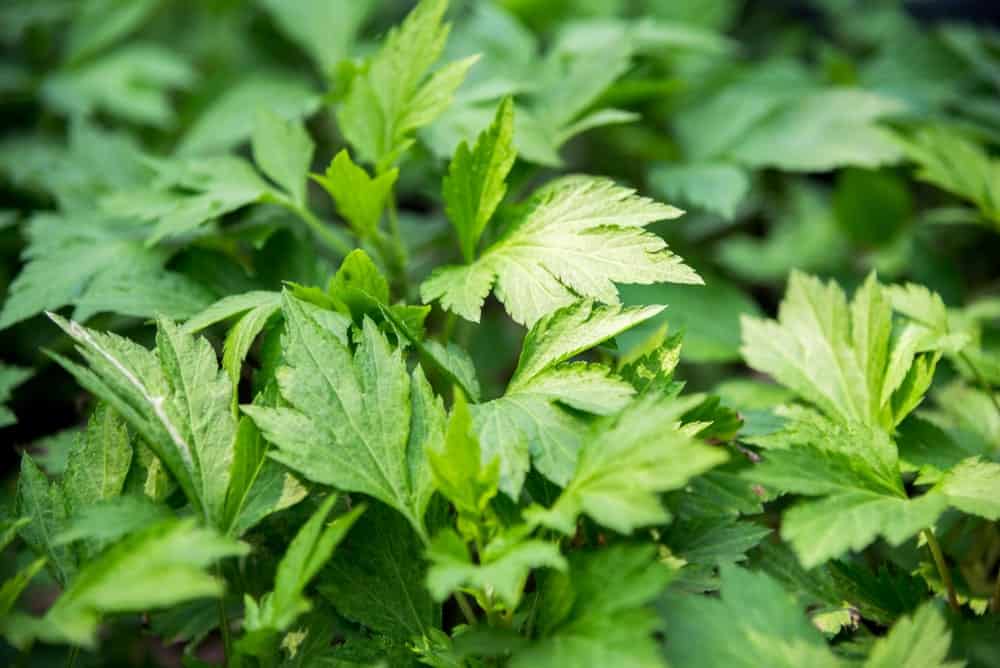 White Mugwort is a Chinese native plant that has erect, yellow-green colored stems. The plant can grow to a height of 6 feet. The leaves of White Mugwort are deeply cut, green in color, and lobed.

From late summer to fall, White Mugwort produces fragrant, cream-colored flowers. because of its colors, the flowers are inconspicuous.

White Mugwort flowers are great as cut flowers. They are very commonly used in dried arrangements. White Mugrowt makes an eye-catching background for the plants that have gray leaves and colorful flowers.

These types of Artemisia flowers are not as effective when paired with white colored flowers. White Mugwort thrives in well-drained, medium moisture, and rich soil.

It prefers growing in areas with full sun exposure or partial shade. They are tough plants and can tolerate drought.

Ghost Plant is a variety of White Mugwort that has upright, purple colored stems that has dark green leaves, flushed with purple color. it consists of a rich spray of creamy-white colored flowers. 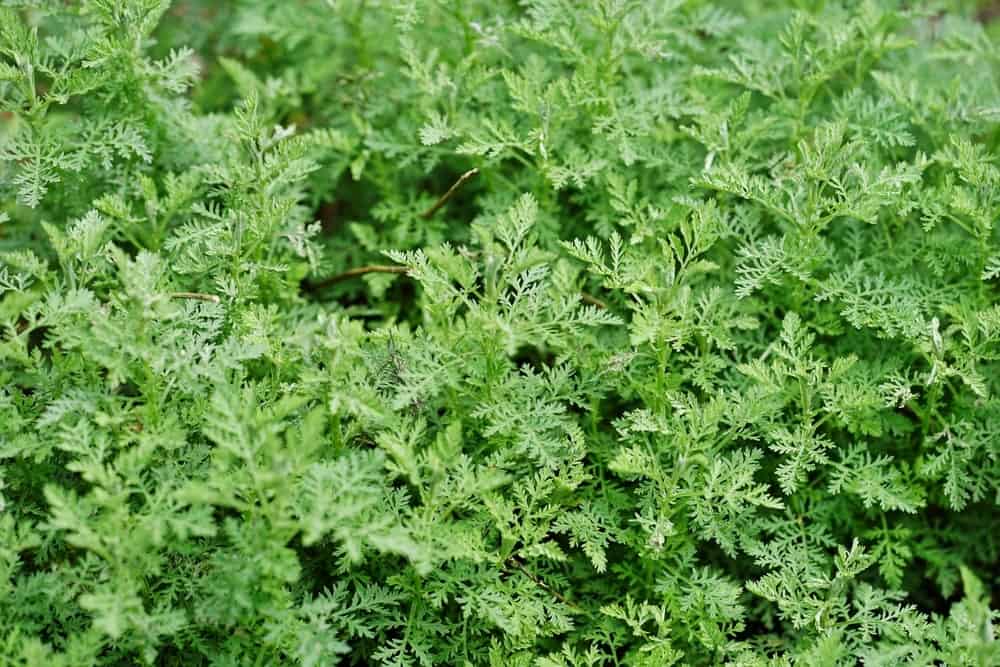 Roman Wormwood is native to the southeastern part of Europe. It is an extremely delicate plant that can grow from 1.5 to 3 feet in height.

It has ferny, triangular leaves that are gray-green in color. They grow vigorously with a spreading habit of growth.

They make amazing ground covers due to their rapid growth. Some gardeners even term it as invasive. These types of Artemisia flowers are brown in color and are very small.

However, they are numerous. Flowers grow at the top of the stalks in the form of thick and long spikes.

The Roman Wormwood is an ingredient in vermouth and some alcoholic beverages. The leaves have an extremely fine and delicate texture that makes these types of artemisias good fillers for bouquets and dried arrangements.

They are also used to make the base of miniature wreaths. Pressed leaves of Roman Wormwood are used as decorations for note cards, candles, and other crafts. 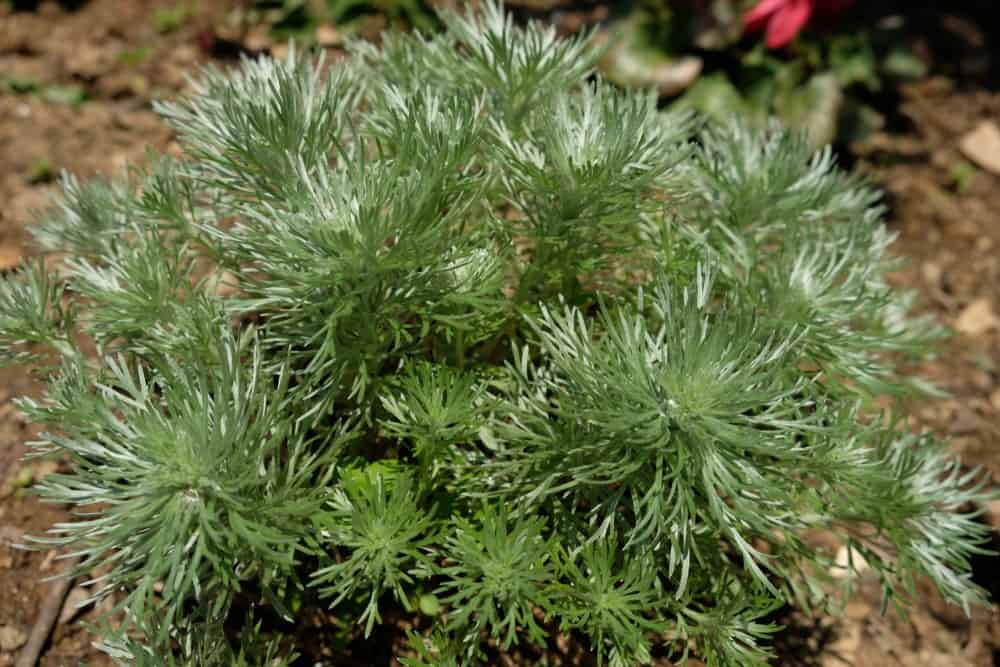 Silver Mound is known for its delicate, fine, and attractive foliage that has a mounding habit. It is native to Japan.

It is low, silky cushion having extremely fine, glistening foliage that is white in color. the flowers of Silver Mound are not attractive or prominent.

Silver Mound is an attractive plant early in the season but the centers gape open rather sloppily due to the heat of summers. This ruins the bushy effect that is associated with the Silver Mound. 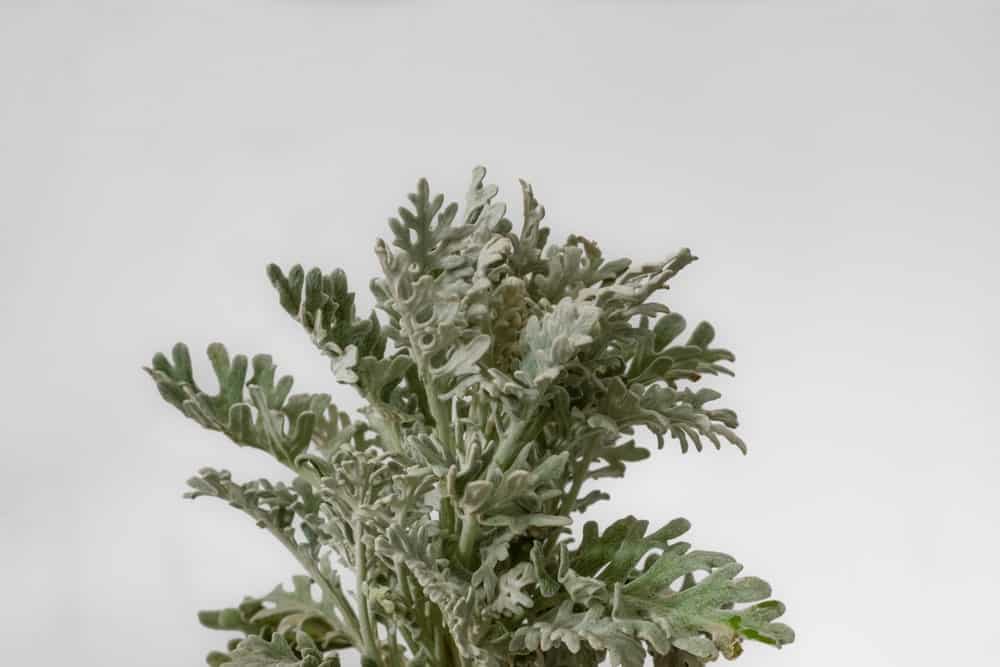 It is an evergreen perennial plant that can grow 1 to 2 feet in height. Its leaves stay all year long while the flowers bloom from July to September.

It has a spreading growth habit due to which it is suitable to be used as ground cover. It cannot tolerate heat or humidity in summers, although it is hardy to Zone 2. They prefer growing in medium loamy and light sandy soils that are well-drained.

It can grow in acidic, basic, and neutral pH. Beach Wormwood cannot grow in shade. They can tolerate drought. Silver Brocade is a cultivar of Beach Wormwood that has felted, non-aromatic, lobed, white colored leaves and white felted stems.

It is native to Asia and Central Europe. It is a semi-woody species of Artemisia. They fall under hardiness zone 3. Artemisia chamaemelifolia grows to a height of 2 feet. it has finely cut, aromatic, and smooth foliage.

Artemisia versicolor is a mystery herb. Not much data is available on them, they are low growing plants that do not grow more than a foot tall. They have finely cut curly, pale gray-green foliage. 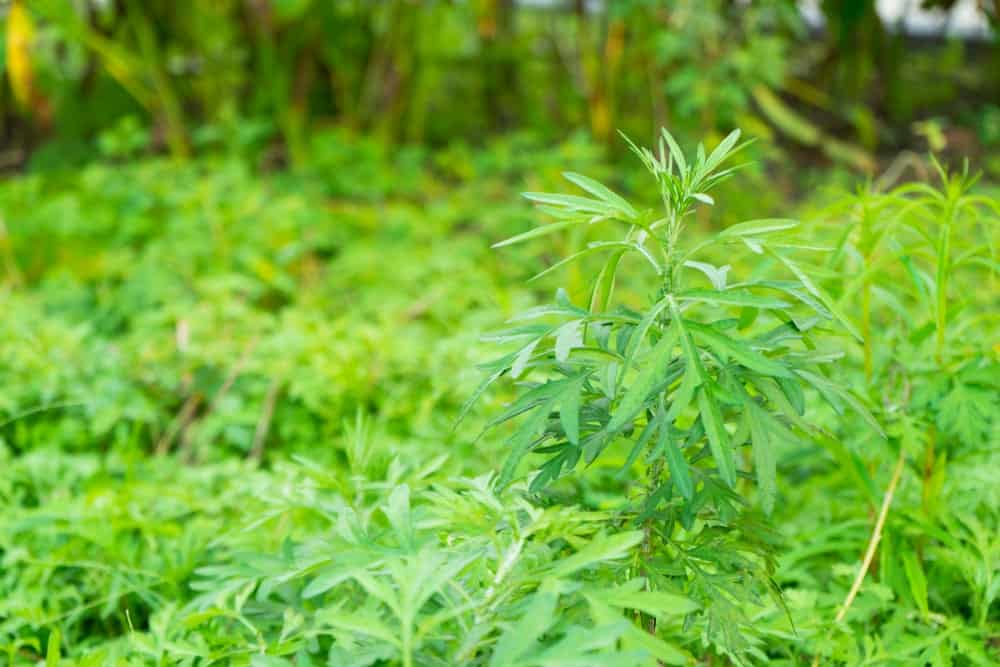 The common name of Sweet Wormwood is sweet annie. It is also known as sweet sagewort, annual wormwood, or annual mugwort. It is an annual herbaceous Artemisia that has been used for medicinal purposes for centuries.

It is native to Asia. It can grow to be as tall as 9 feet. it is fast growing species of  Artemisia. Sweet Wormwood contains artemisinin which is a leading treatment for malaria disease all around the world.

This plant is grown only so that this compound can be derived in bulk. 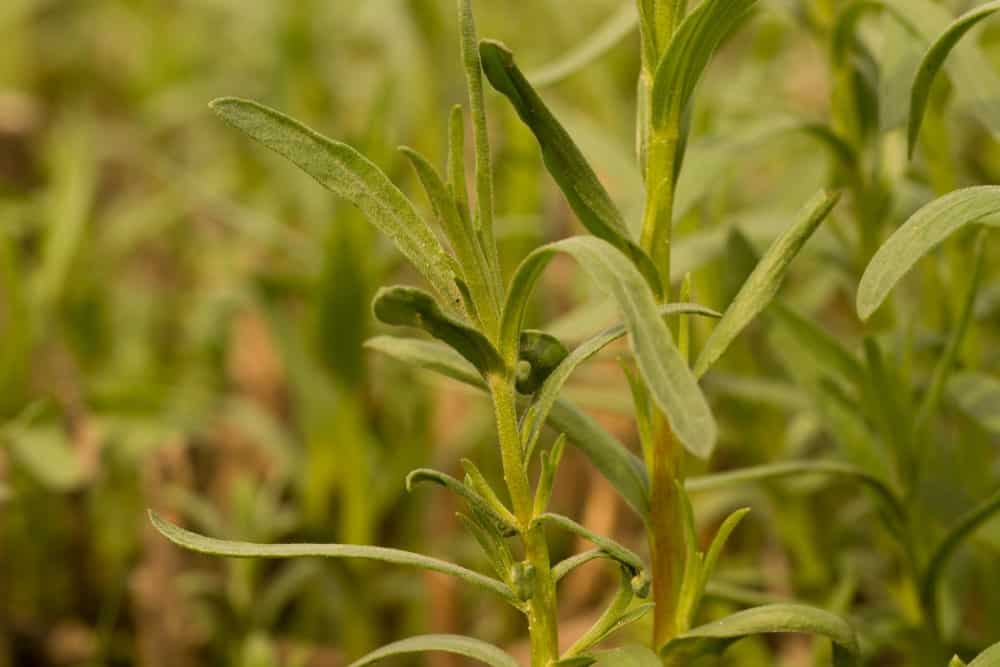 Tarragon is a popular culinary herb. It is native to Northern Hemisphere. It grows in hardiness zones 5 to 8. It can grow up to 3 feet tall. This type of Artemisia rarely produces any flowers.

Tarragon herb should be planted after the last frost has passed. It grows in areas that receive moderate sun with slight shade in the afternoon. It grows best in a well-drained, rich, and loamy soil.

There are many other types of Artemisias that have culinary and ornamental uses, but the ones discussed are the most common and well-known among all.

Artemisia plants are low maintenance and easy to grow plants. However, that does not mean they do not need to be taken care of.

Artemisas are not known for their flowers but for their aroma and for their foliage. Artemisias are one of those genera of plants that have stunning foliage.