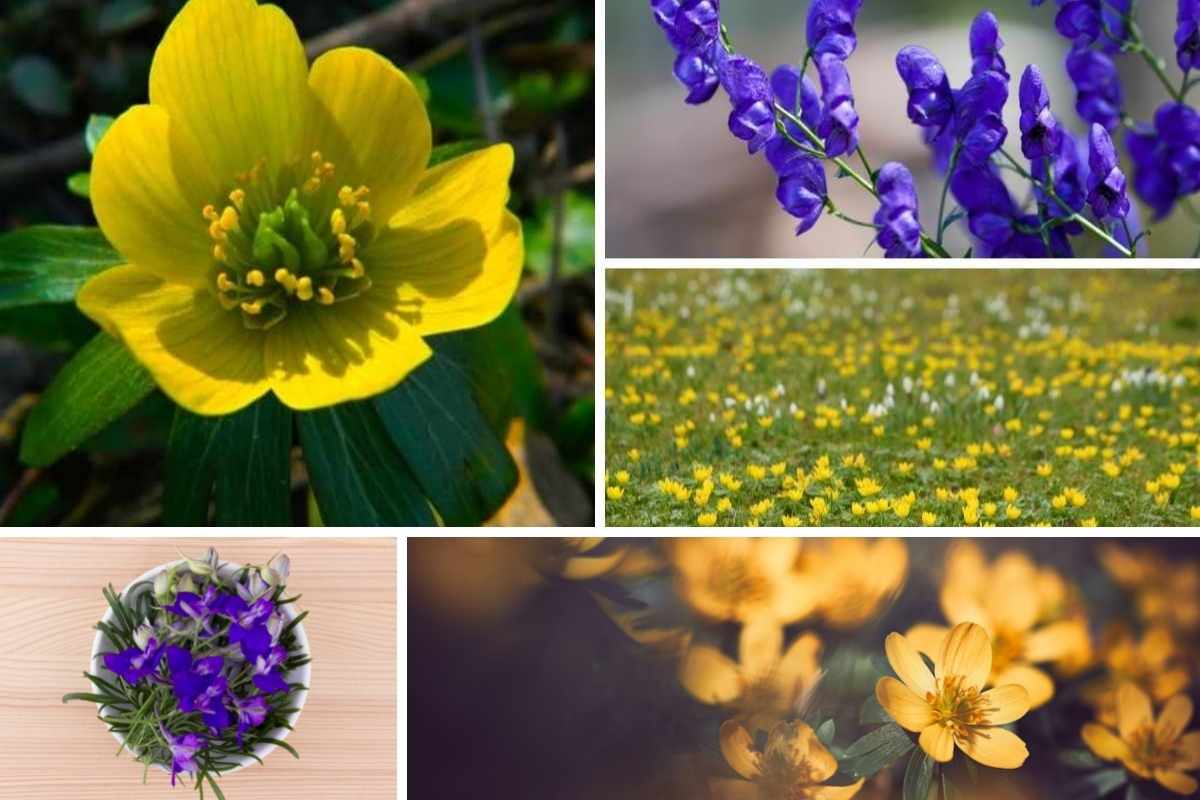 The term Aconite is reserved for the flowering plants of the buttercup family. What we call aconite flowers are largely divided into two groups: genus Aconitum, also known as ‘monkshood’ is home to summer-flowering poisonous plants, and the genus Eranthis (winter aconite) consisting of spring-flowering ornamentals. There are over 250 species of aconite flowers in the genus Aconitum, but only eight in genus Eranthis.

These flowers have been cultivated and used for thousands of years in Chinese herbal medicine. Surprisingly, the word ‘aconite’ comes from the Latin word for poison and the roots of several of its species were widely used by Japanese and Chinese armies to poison the tips of their arrows and spears in times of warfare. Despite its poisonous tendencies, some active chemicals can be derived from the plants that can be highly beneficial in many ways.

One active compound, called diterpenoid alkaloid, was discovered by Chinese practitioners early on, and has since been used in ailments ranging from asthma to migraine headaches. This dangerous balance of poison and cure, and the eye-catching purple and yellow flowers, makes aconite plants a welcome addition to your garden. Let us have a look at the types of aconite flowers, their various uses, and their ideal care plan so you can enjoy their benefits right at home. 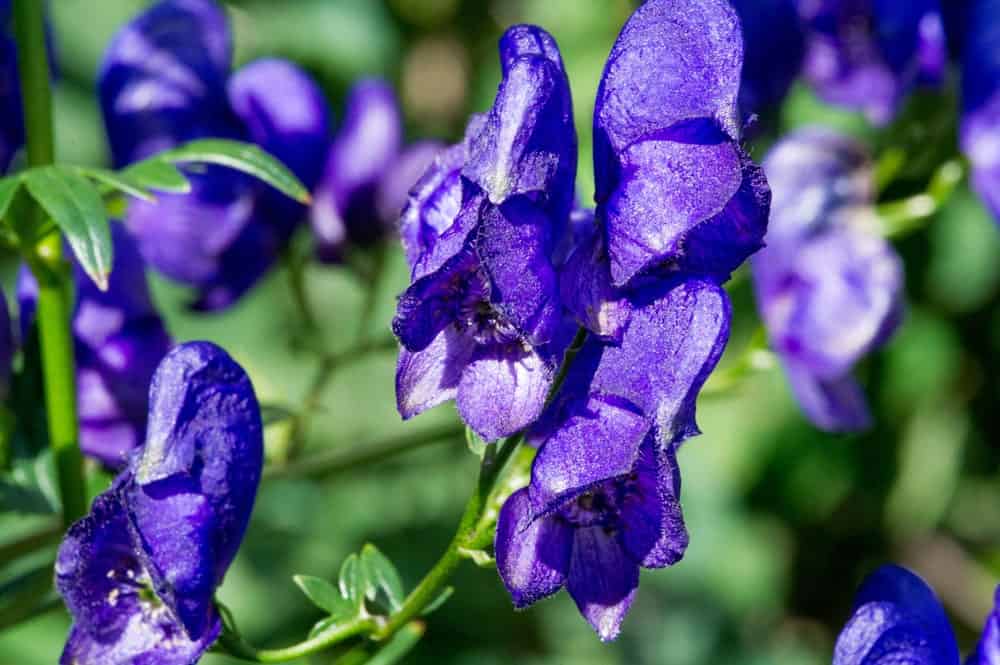 The two genuses of aconite flowers are quite different from each other visually and physiologically. In the genus Aconitum, the roots are usually broad, while some species have rhizomes. The leaves are shaped like fingers, with each lobe is further divided into three and toothed.

The flowers are hood-shaped, and grow in spike-like bunches. They are usually colored either purple or blue, but can sometimes also yield yellow or white petals. There are two to five petals in each flower. 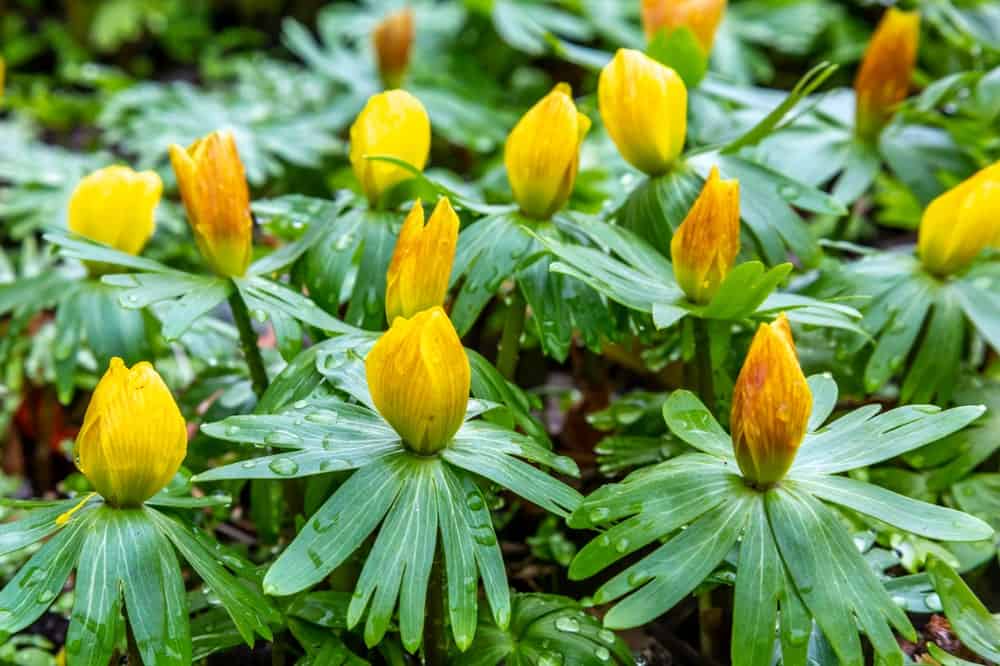 On the other hand, winter aconites have five to eight yellow sepals and grow solitary on short stalks. The flowers usually wear a crown of leaves spread around its base.

There are several uses of aconite extracts in herbal Chinese medicine. They can be used to reduce cold-related fever, reduce symptoms of pneumonia, laryngitis, croup, and asthma. Some active compounds can also help in lessening pain, inflammation, and lowering blood pressure.

It can also be utilized as a diuretic, and to induce sweating and sedation. In typical Asian medicine, the root extracts are mixed with licorice or ginger to amplify their qualities. In Western culture, aconite was usually employed as a tincture, topically applied as an anti-irritant.

In homeopathic medicine, the flowers are said to help in recovering from anxiety and restlessness, reducing symptoms arising from extreme weather conditions, various viral and bacterial diseases, and severe pulsating headaches. 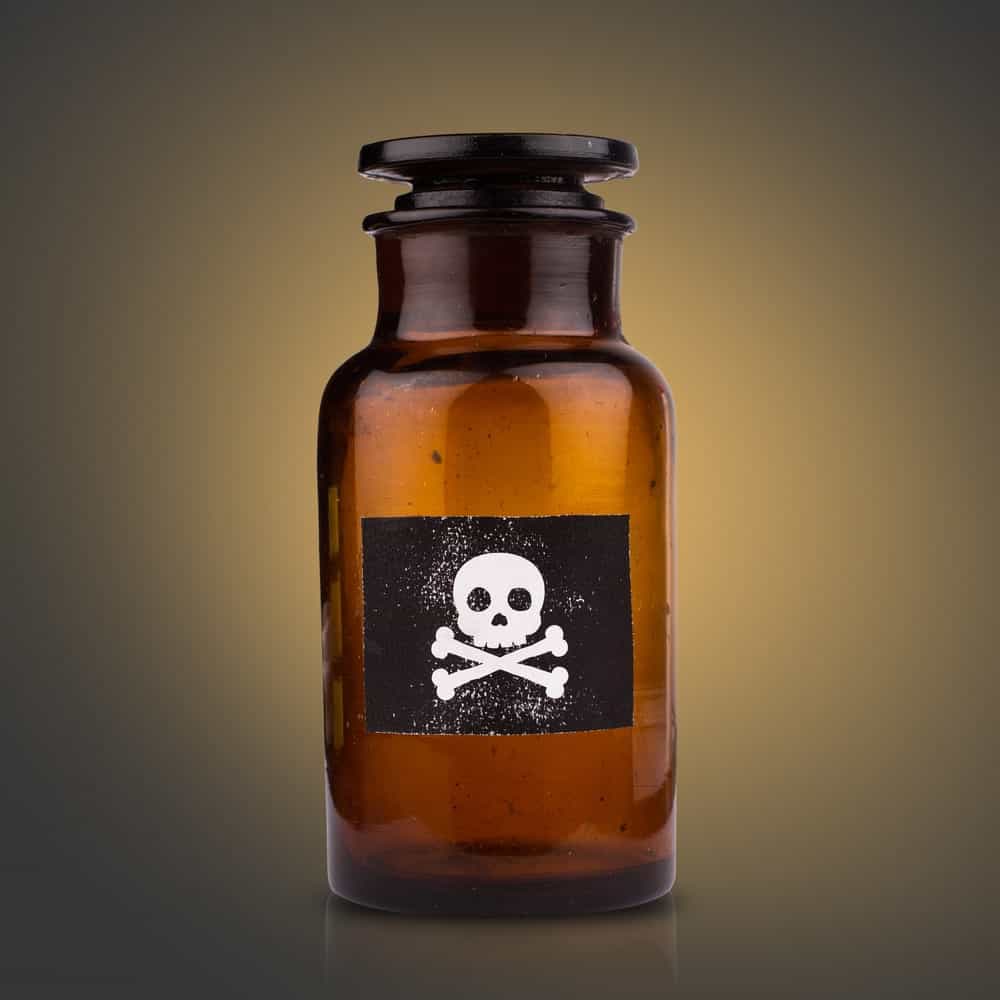 From Greek mythology, we understand that aconite has been known to be poison for a long time. The goddess Hecate is said to have invented aconite, which Athena used to transform Arachne into a spider. Also, the famous Greek murderess Medea attempted to poison Theseus with a cup of wine spiked with wolf’s bane.

The Minaro people residing in Ladakh use a kind of aconite extract on their arrows to hunt ibex, and earlier, the Ainu in Japan hunted bear with poison-tipped weapons. The Chinese have also long used Aconitum poisons both for hunting and warfare. Aconitum poisons were used by the Aleuts of Alaska’s Aleutian Islands for hunting whales.

Stabbing the whale with a poisoned spear would incapacitate it immediately, causing it to drown. In humans, the initial symptoms of being poisoned can manifest immediately. With large doses, death is inevitable and instantaneous, taking no more than six hours to prove fatal.

This is why these flowers must be handled with care.

Several moths and caterpillars use these plants as sustenance in the wild, and the flowers are especially evolved to be pollinated by a species of bumblebees with long tongues. These particular bees have the strength and necessary mechanism to open up the flowers and reach the nectar on the inside. An off-white variety of these plants, known as Aconitum lycoctonum, is also a source of nectar for butterflies because of their nectar being more easily reachable.

As discussed above, the total species that come under the aconite umbrella are more than 250. Most of them belong to the Aconitum genus, while only eight belong to genus Eranthis. Here are some famous and most commonly found varieties of the flowering plant. 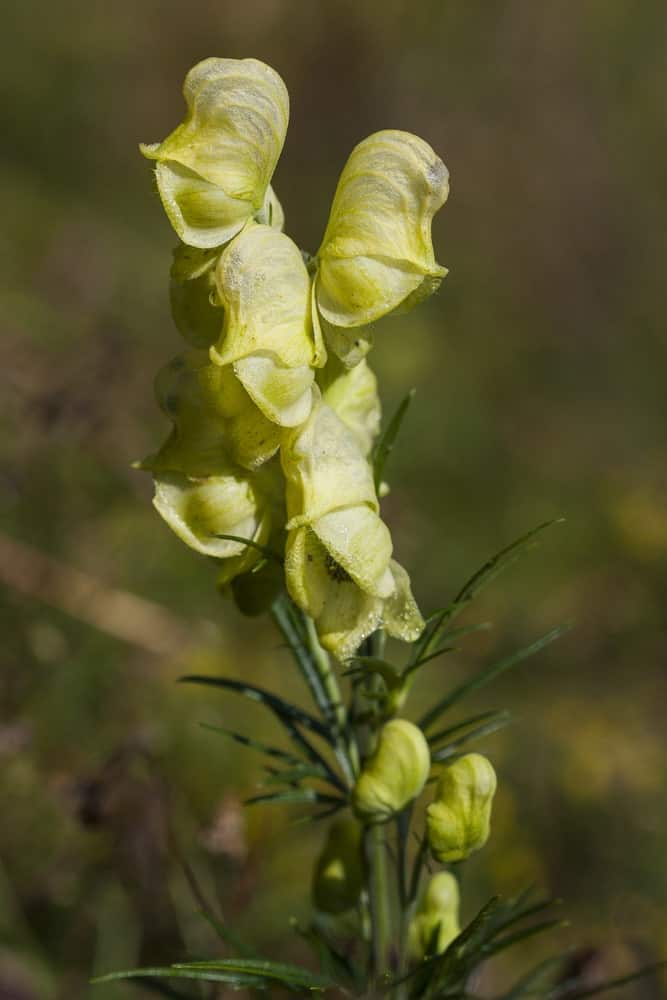 Also known as Aconitum anthora, these yellow flowers are usually spread in the areas surrounding European mountains, the Alps and Carpathians in particular, and some northern parts of Asia. The name ‘anthora’ comes from the belief that these flowers were the best antidote to another fatal species of aconite, which is deadly to humans and livestock. The root includes volatile salts and essential oils, while the rest of the plant has very useful alkaloids.

It has been used for treating many respiratory tract disorders and deep aches in the body. 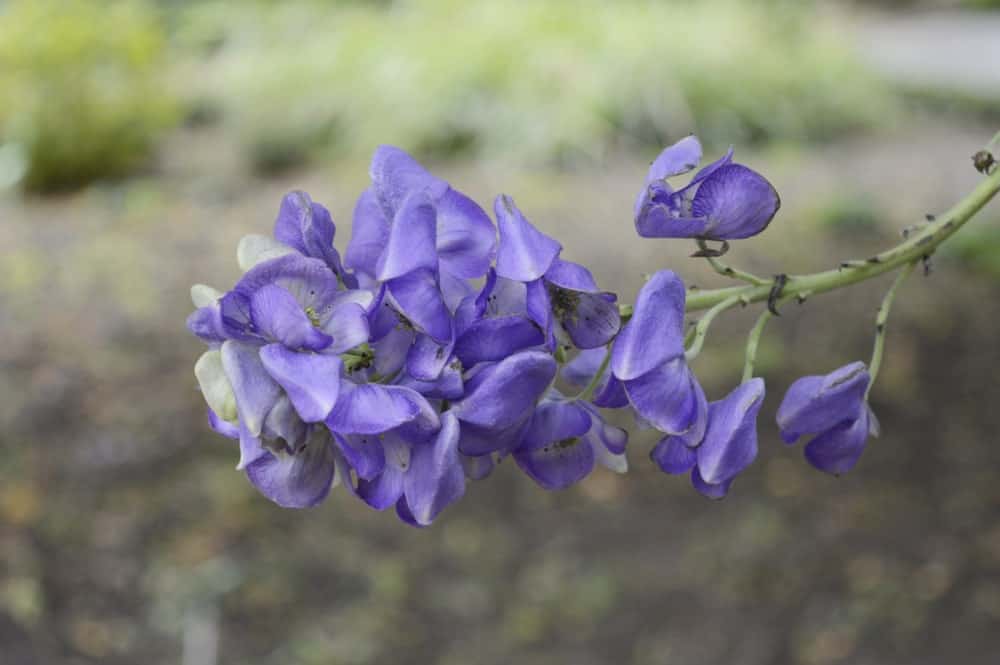 The Aconitum carmichaelii is native to East Asia and Eastern Russia. Its great occurrence in the Chinese region has also created an alternate name ‘Fu Zi for these brilliant blue flowering plants. They grow to be about 1.2 meters tall and are usually sufficiently erect.

The flowers blossom in late summer and autumn. The entire plant, including roots, flowers, stem, and leaves, is extremely toxic and can be deadly and fatal if ingested. 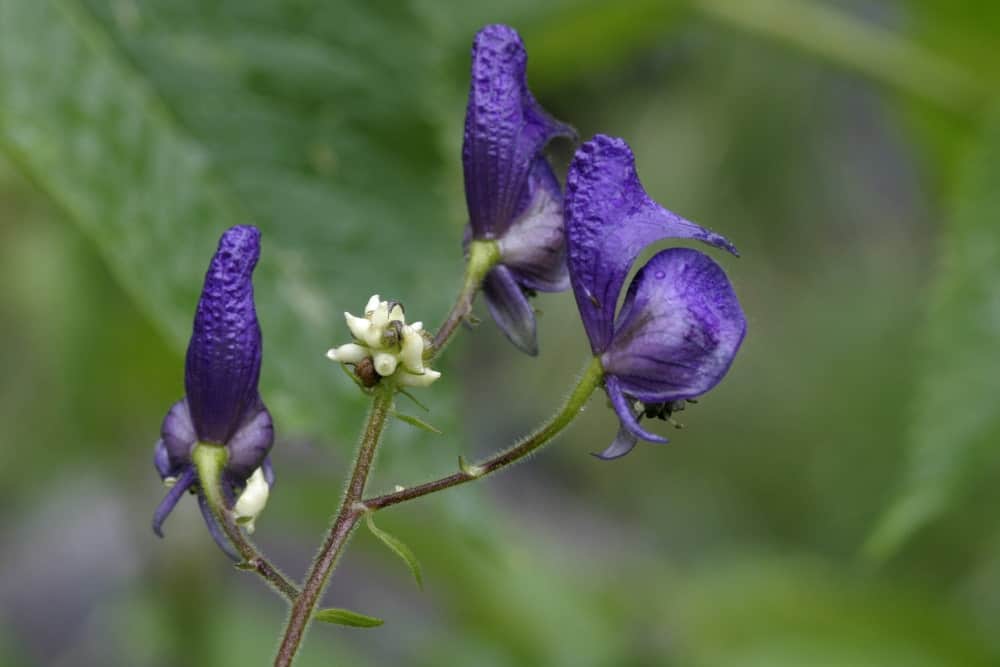 Also known as Aconitum columbianum, this flowering plant grows in the wild in North America. It thrives in moist areas, meadows, and coniferous forests, usually growing in elevations from 600-2,900 meters. The tall erect plant has lobed leaves and long stems with folded and wrinkly flowers.

The colors can range from purple and blue to white and yellowish, producing pod-like seed-bearing fruits. There are at least two other variations of the Western monkhood, namely the Howell’s monkshood and the viviparum. 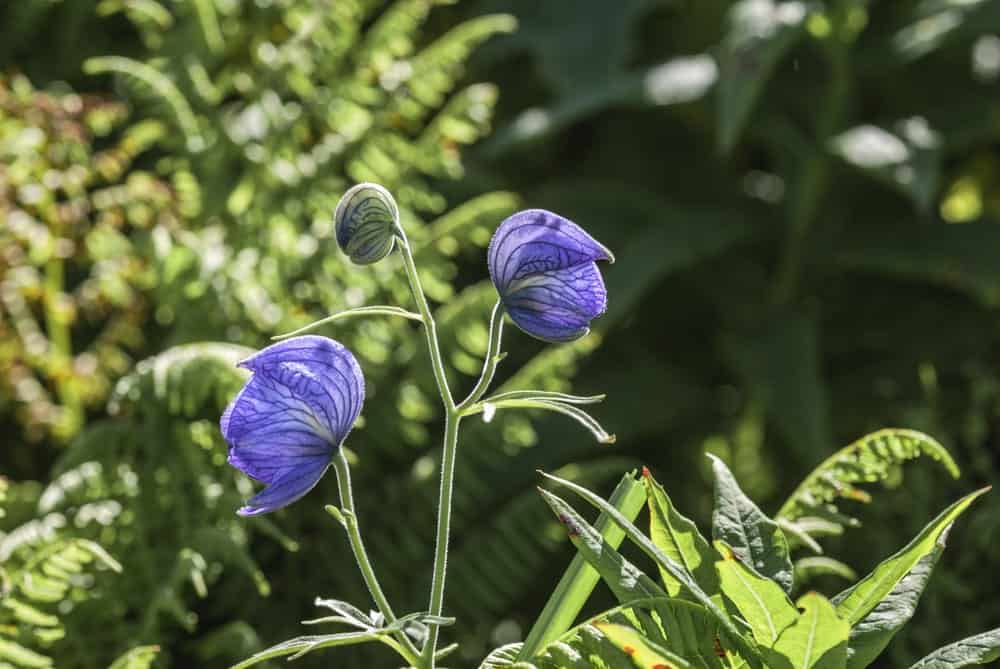 These blue flowering plants bloom in peak summer months June and July, wildly growing mainly in Alaska and Canada. They usually grow in meadows, thickets, and banks by the stream in partial shade and rich soil. This perennial plant has a thin, straight stem that can grow to be about 28 inches in height.

The stems are topped by a small cluster of dark blue, hooded flowers. The leaves are generally cleft, smooth, and few, despite varying foliage. 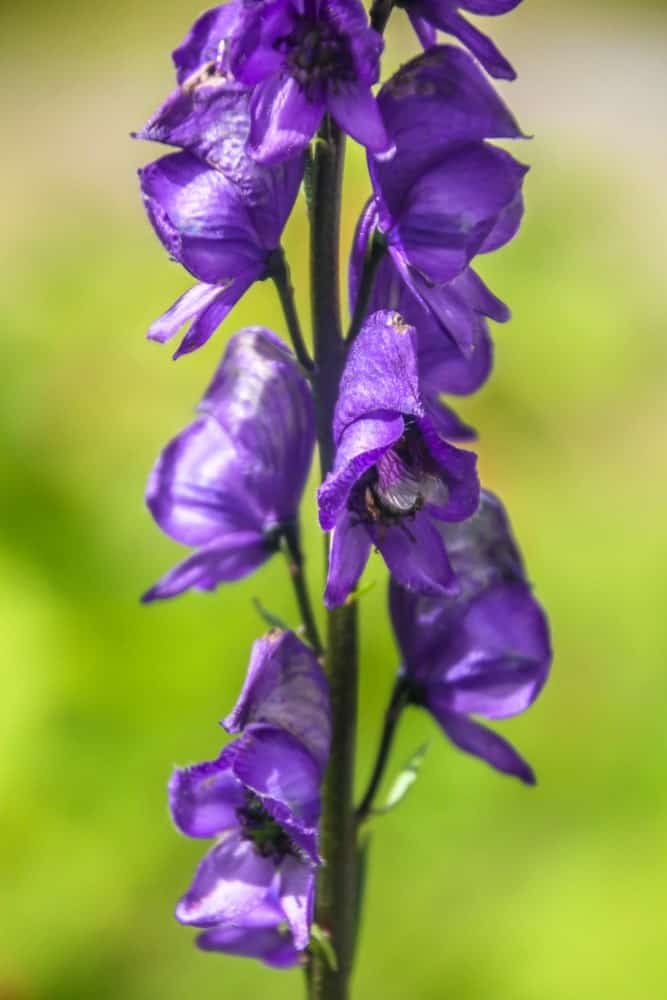 Native to Korea and Siberia, these plants are cultivated in gardens of temperate regions. The flowers are showy and bright, and so serve an ornamental purpose. Despite containing poisonous aconite, Chinese lore claims that the flowers can have many health benefits if measured very carefully.

If the measurement goes even slightly wrong, the poison can take over. 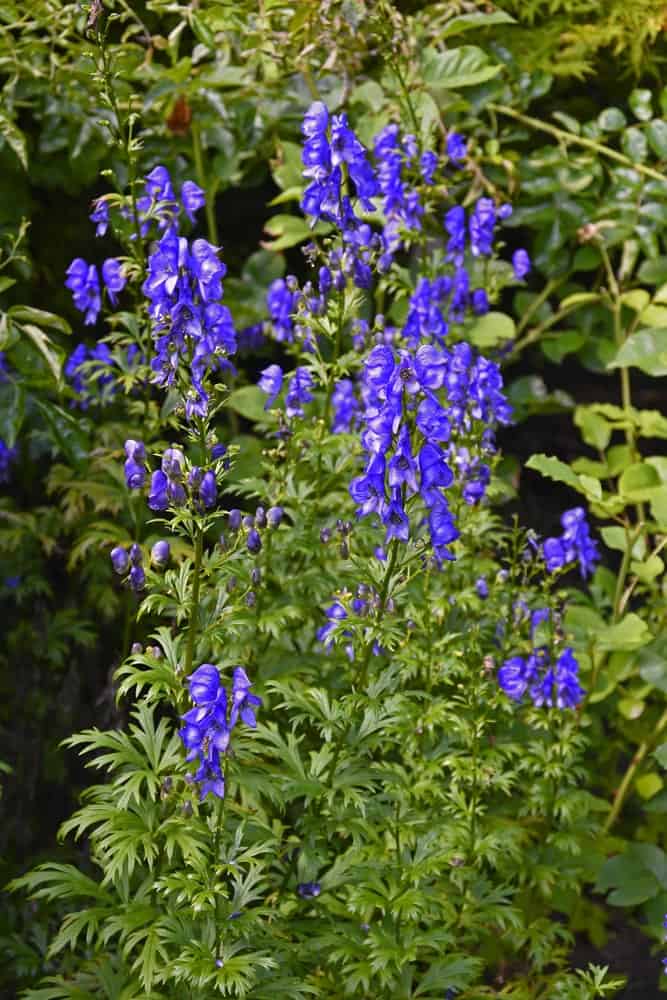 The Spark’s variety is native to Chinese provinces of Gansu, Henan, Hunan, Shaanxi, and Sichuan where it can be found growing in forests and mountainous regions. The plant has divided leaves with far-spaced stems that have sparsely placed flowers. The sepals are blue, and the flowering period is from September to October.

There are different varieties and hybrids of the plant that are cultivated in China. 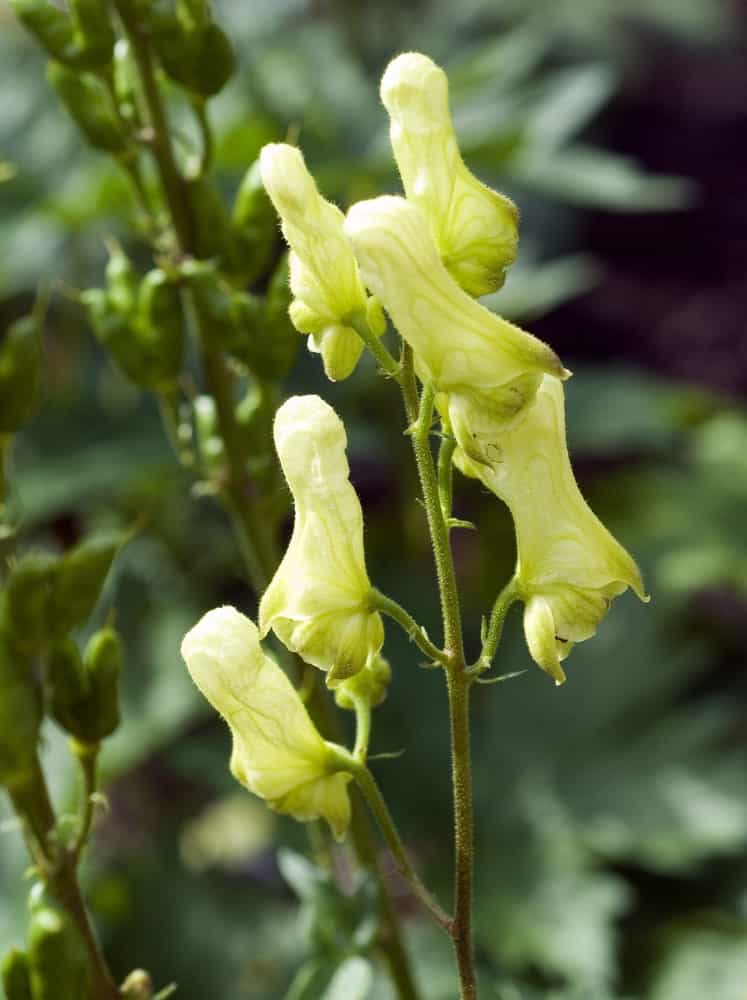 This perennial shrub has thick roots that grow up to a 100 cm in height. They are usually found growing in shades of mountain valleys, preferring moist or damp soil. The flowers are pale yellow, usually with a purplish tinge, blooming from July to August.

The Aconitum coreanum is native to Korea, China, Mongolia, and the Eastern Russian region. Just like other varieties, these plants are also extremely poisonous, but have also been used in traditional Korean medicine to treat chills and aches in limbs. 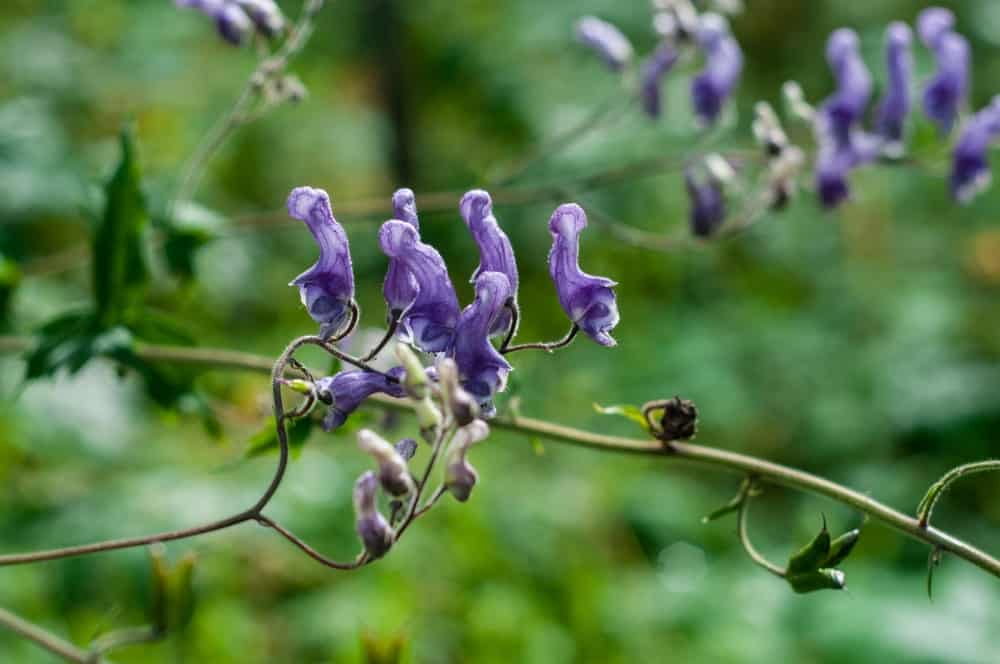 Found primarily in Europe and northern Asia, the scientific name lycoctonum is a modern rendering of the Latin word for wolf’s bane. The herbaceous plant grows to be about one meter tall, with palmately lobed leaves. The flowers are 18-25mm in size and usually dark violet in color.

Sometimes they can be found in a pale yellow variety. The northern wolf’s bane is also poisonous. 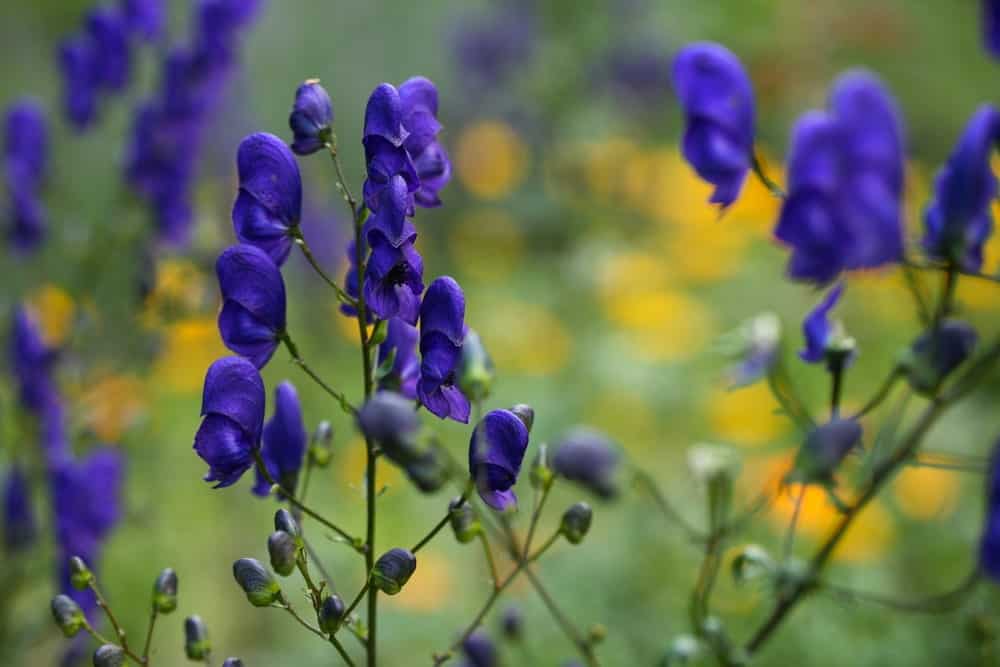 The species is native to western and central Europe, growing to a maximum of about 4 inches. The stems are hairless, while the leaves are rounded and divided into five to seven segments. The plant is not only poisonous to ingest, but also highly toxic to the touch.

The flowers range from dark purple to bluish purple in color. According to Flora Europea, nine sub-species of napellus are recognized, including corsicum, firmum, hians, and lusitanicum amongst others. 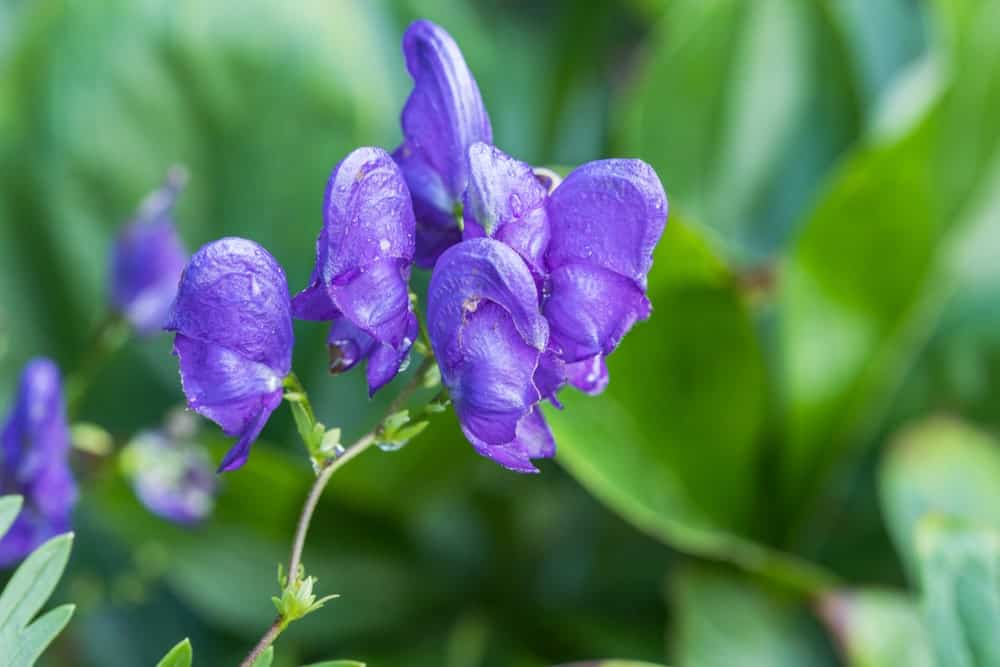 Also known as the Aconitum plicatum, the garden monkshood variety is native to Germany, Czech Republic, Poland, and Slovakia in particular. They are usually found at biotops of vegetation and ravine forests. The inflorescence is simple or branched with few flowers on each stalk, and the flowers can range from shades of blue to hues of purple.

This species is further divided into plicatum and Mitka subspecies. 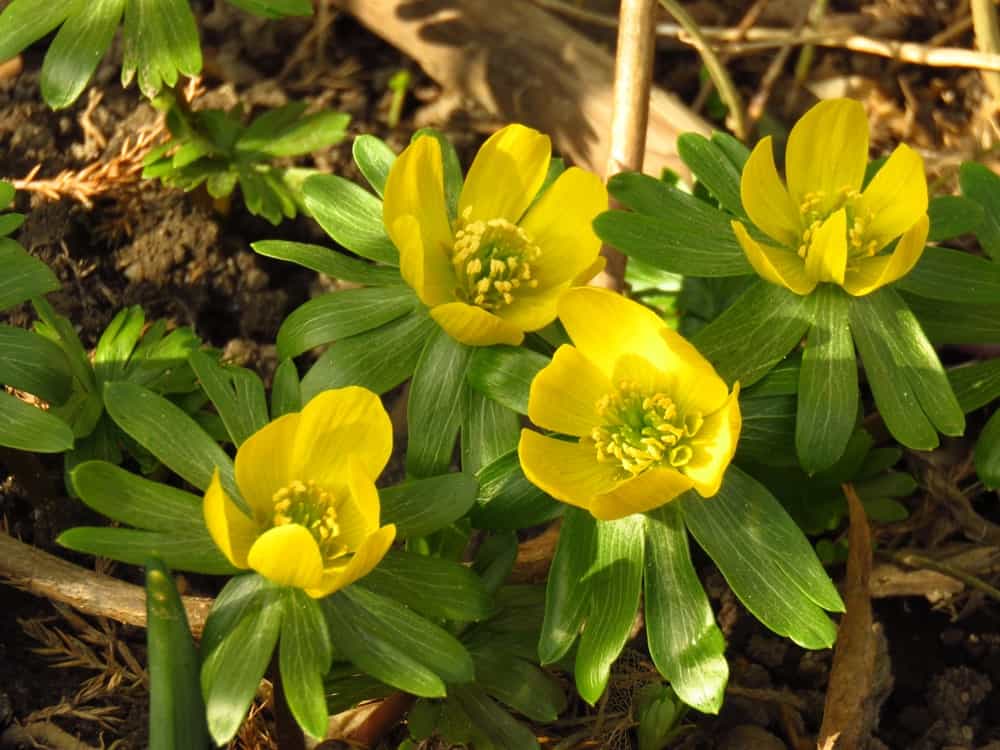 Also commonly known as the wild monkshood, the Aconitum uncinatum grows in moist to wet habitats, usually along the banks of rivers and streams. Its usual terrain is that of the Appalachian Mountains or at the upper Atlantic Coastal Plain. 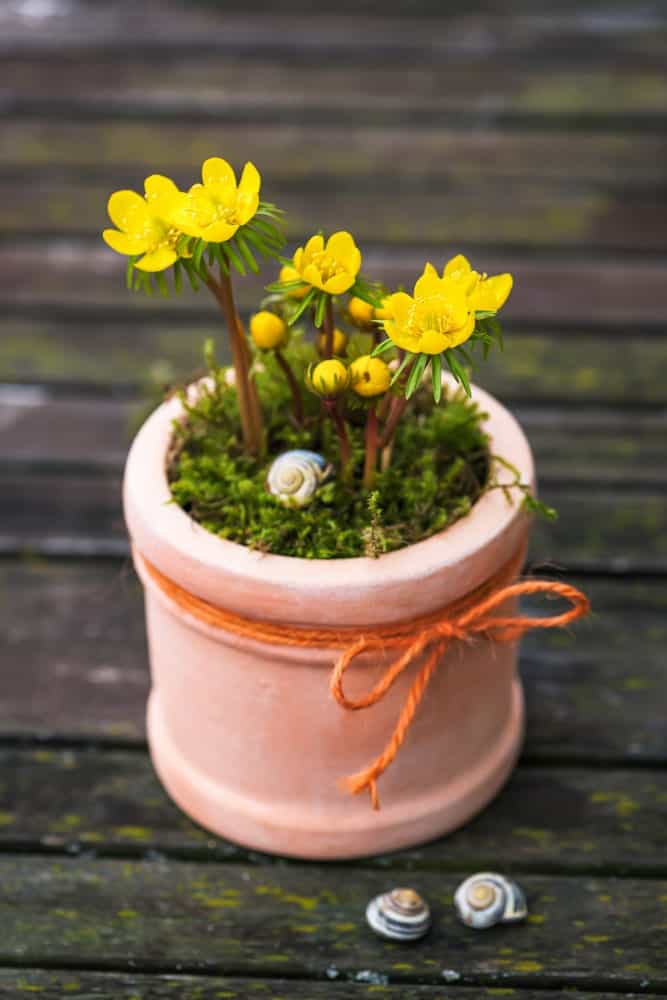 The genus contains eight flowering plants native to southern Europe and Asia, going as far as Japan. Species from Eranthis are just as poisonous as those from Aconitum, and hence are placed in the same common name. The kinds of poisonous compounds contained in the plant, however, are quite different, such as cardiac glycosides.

Eranthis grows on forest floors, using filtered sunshine from the canopies of tall trees. In cases where the canopy becomes too dense, the leaves die off. Because of their hues, these flowers are used widely for their decorative value in Europe and North America.

Growing and Caring for Aconite Flowers

If you are interested in planting aconites, it is best to take it up in September so the roots can develop properly before winter, to blossom and thrive until the following spring. If you do plant them in spring, you must water it very regularly after planting. These types of plants can take root in all types of soil, even if it is very dry.

You can choose to add fertilizer or compost when planting seeds. Another tip is to cut off stems with flowers after the blooming; this will promote and accelerate the appearance of new flowers. Although these plants can add variety and brilliance to your garden, they must be treated with utmost caution since the balance between their medicinal uses and their toxicity is delicate.

Besides that, the beautiful and varying hues of aconite flowers can certainly add to the aesthetic of your garden. Get planting!