The fruit is known as Barbados cherry or West Indian cherry. Read this article that discusses the types of acerola fruit, and the benefits it brings. 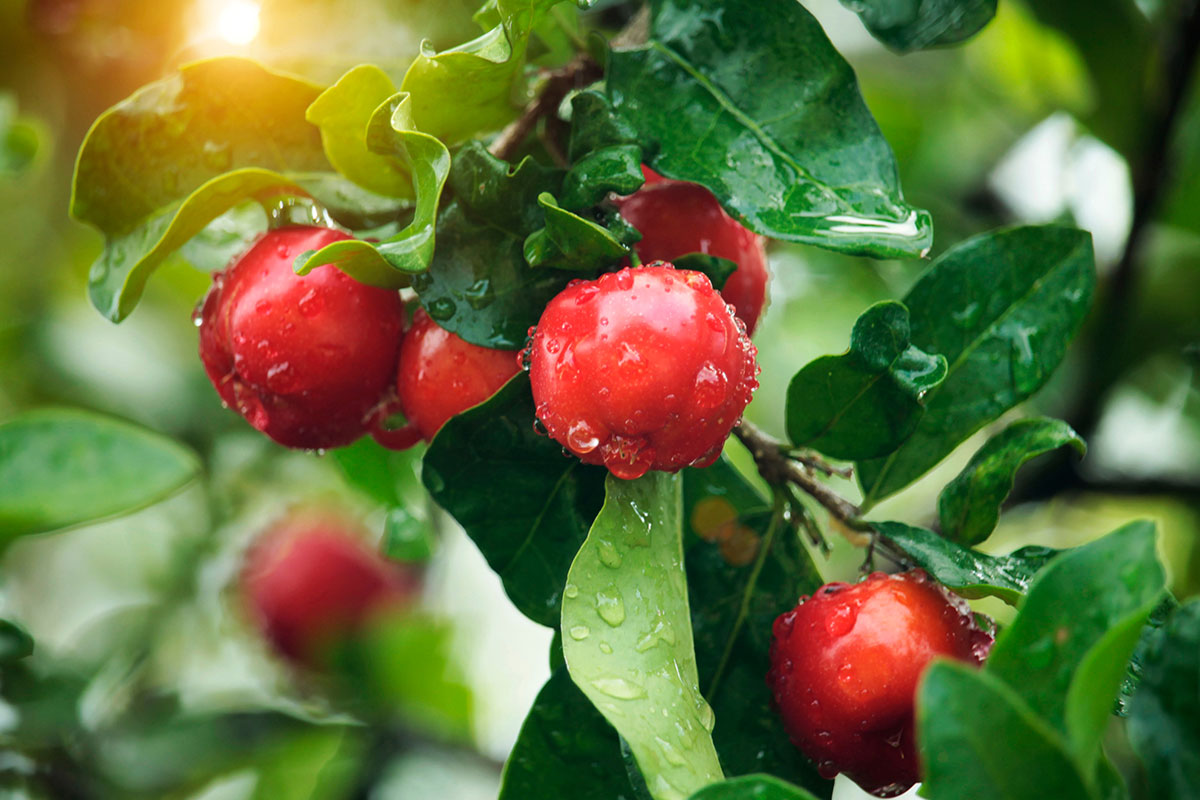 Acerola is a type of fruit that comes from a tree that thrives in warmer weather. The fruit is also known as Barbados cherry, and can sometimes be called West Indian cherry. There is only one type of acerola fruit, although there are two main species of tree that the acerola fruit comes from. Those species are the Malpighia emarginata and the Malpighia glabra, with both species as popular as the other. Learn more about the types of acerola fruit and its uses here.

The two main types of acerola fruit are the fruit from Malpighia emarginata and Malpighia glabra. Although the fruit comes from two different species of trees, the fruit of either tree is called the Barbados cherry. These trees prefer warmer climates and dry woodlands to grow in.

The root system on the acerola tree is very shallow, making the tree very resistant to wind. It prefers a dry climate and soil that is well-drained. 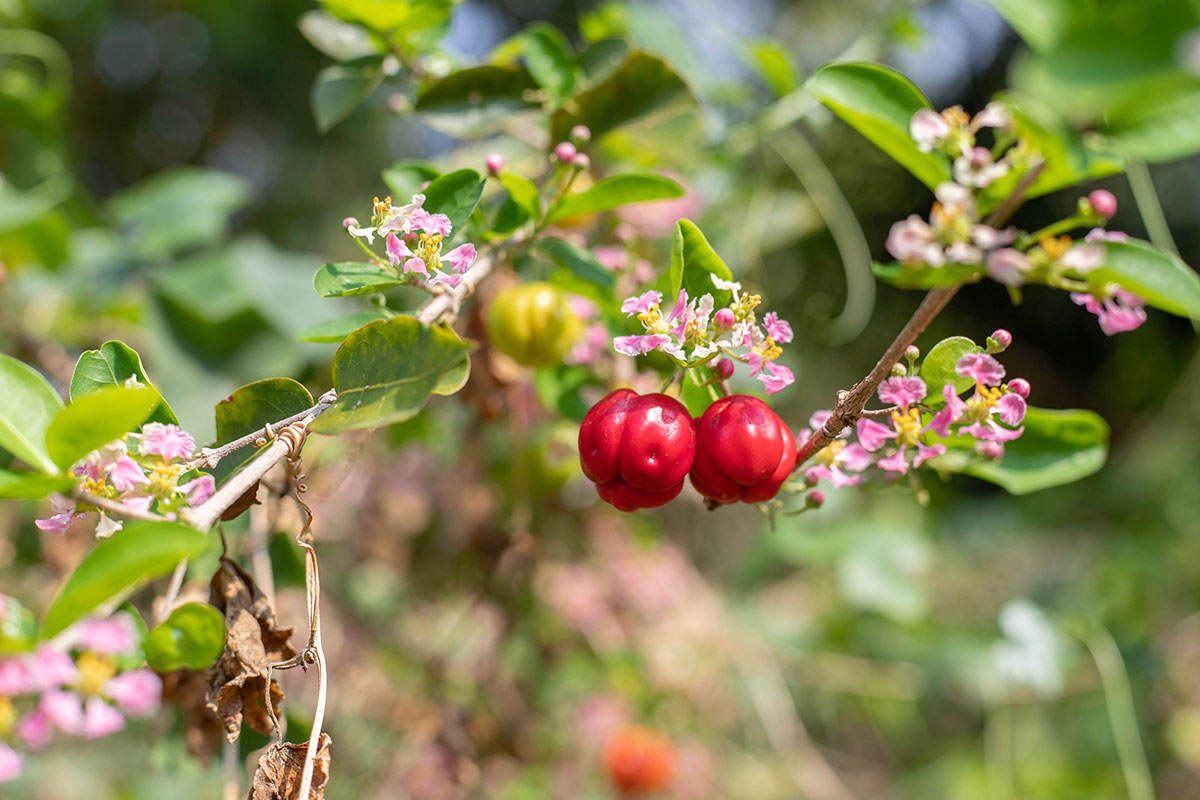 The Malpighia glabra is a tree bearing the Barbados cherry and can even be considered a shrub or bush sometimes. Still, it can grow as high as 20 feet tall. The blossoming season begins with pink and purple flowers that will be followed by red drops that turn into the fruits that are enjoyed as the Acerola fruit.

This is a fruit that has a fleshy appearance and texture to it, and they do not split open when they are ready to be consumed. This species can be found in California in the United States, but also has been found in St. Croix, Trinidad, and Tobago. The Netherlands, Brazil, Cuba, Puerto Rico, Jamaica, and Margarita Island in Venezuela are all homes of the acerola tree known as Malpighia glabra. 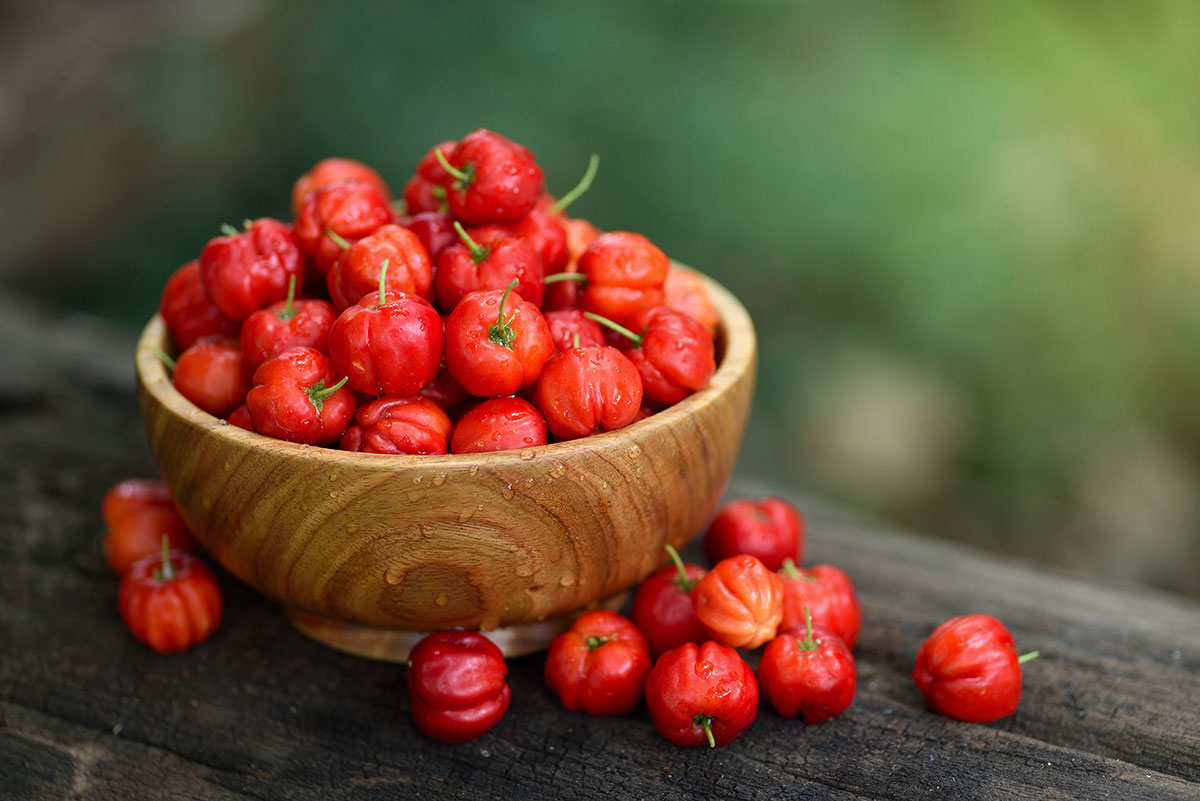 The Malpighia emargrinata is not much different than the Malpighia glabra. The most common location for this tree is in Brazil, which is now considered the world’s largest producer of the Barbados cherry. The size of the tree is the same, and they are almost identical, being very difficult to tell apart most of the time. The Barbados cherry from this tree is small, approximately 1.5 cm in diameter.

At one time the Malpighia emargrinata was called the Malpighia punicifolia, but that name was changed to M. emargrinata in the 1970s. This tree, while common in Brazil can also be found in the Yucatan and Mexico. The tree is most commonly located on the West Coast of Mexico and in Central America.

Called the Barbados cherry, you will find it here. It is also found in Trinidad and the Bahamas. Asia is home to a nice-sized population of the acerola fruit tree as well.

The Barbados cherry that comes from these trees is a tart fruit, almost like a citrus. It is high in Vitamin C and is edible and enjoyed for a wide range of purposes, much like oranges or other fruits in the citrus family are enjoyed.

Qualities of the Acerola Fruit 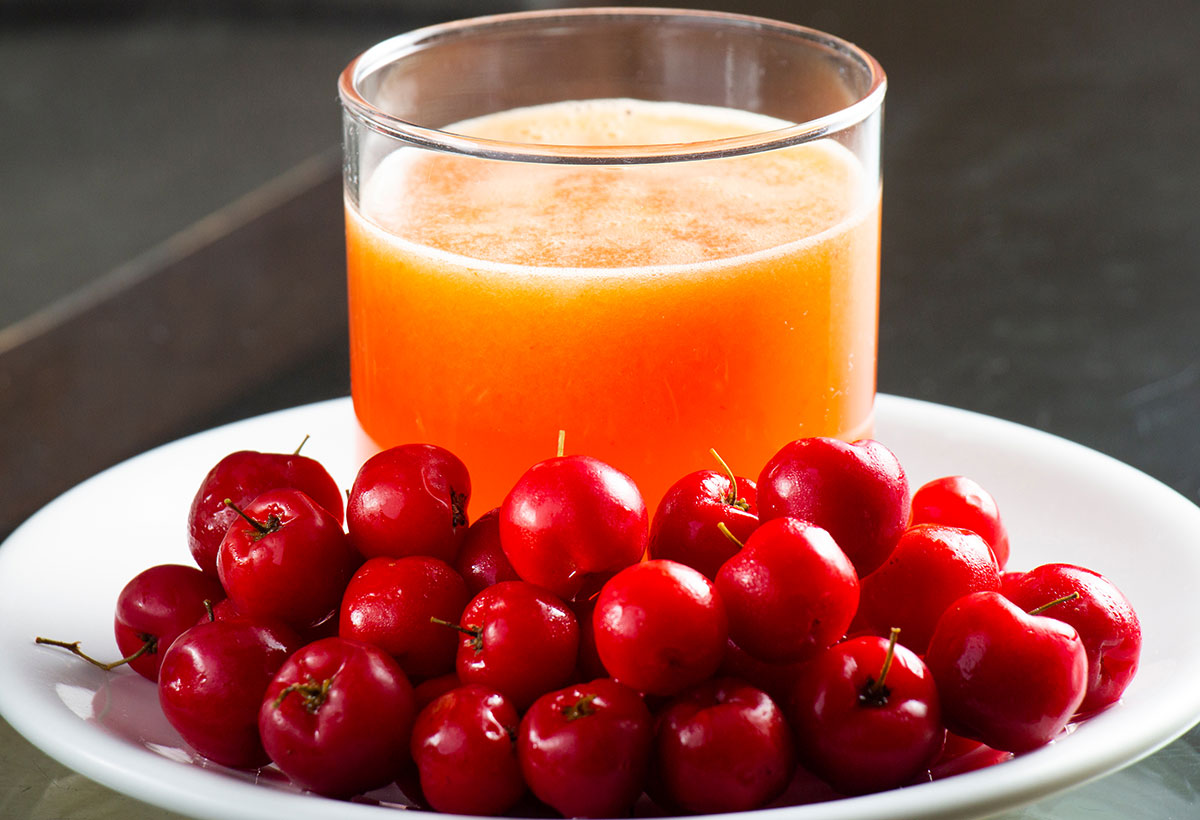 Acerola fruit has been used for centuries and is enjoyed for being high in Vitamin C and ascorbic acid. The levels of acidity of the fruit are determined by where the fruit has grown. Higher levels of sunlight will result in fruit with a higher level of acidity. The fruit is also not always harvested at exactly the same times of the year, and this will depend entirely on where the fruit was grown.

This makes the acerola fruit a very popular source of Vitamin C in some locations. There are not many fruits that can offer more Vitamin C. The many benefits of acerola fruit include healing, nutrition, and it is also used as a medicinal supplement for many people, much like Vitamin C is used.

When the fruit is heated, some of these effects can decrease. Still, it makes for a delicious food source in jam, for example, and can still offer nutritious value even when the ascorbic acid content is lower.

Uses of the Acerola Fruit 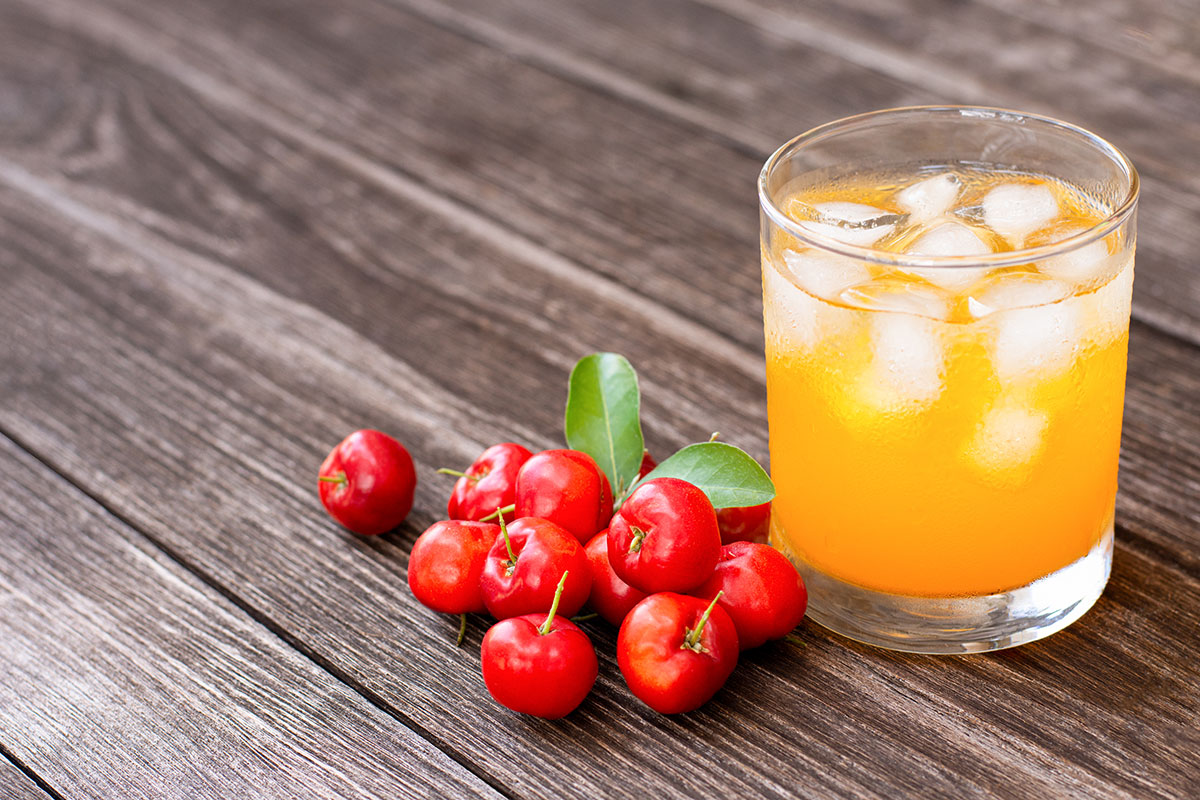 The Barbados cherry is used as a food source, but most commonly is used as a natural remedy for many conditions. As food, it is eaten on its own and it is frequently made into juices, jams, jellies, ice cream, and pie, and in some locations is a popular cocktail ingredient.

In many locations where the fruit is grown, the fruit is used as a remedy for many natural ailments. Some of the most common things that the Barbados cherry is used for are anti-inflammatories, diuretics, and even stimulants in some cases. It serves as an effective treatment for diarrhea, treats anemia, and many other conditions.

The acerola fruit is said to have a positive impact when complementing the treatment plans of people with high cholesterol, liver problems, tuberculosis, rheumatoid arthritis, and diabetes. Other common issues that the acerola fruit can help with include digestive problems and preventing and treating the cold and flu.

It is also known to help with things like treating depression and anxiety and serves as a calming agent. It is a known antioxidant and, like many other nutrients high in Vitamin C it can help to prevent and treat scurvy.

The acerola fruit can be used for many skin conditions as well. It helps to strengthen collagen, treat acne and skin wounds, and can be used to build the elasticity of the skin. This is most effective when the fruit is used in cream-style products.

These remedies are relying on the powerful action of Vitamin C, that works with protein and in the synthesis of many hormones. Like Vitamin C, acerola fruit relieves oxidation in the blood and functions as an antioxidant. Oxidative injury to the body can result in damage to tissues, and worsen some pre-existing conditions.

For both health and nutritional purposes, the fruit is as widely studied as other fruits high in Vitamin C, with positive results.

Brix levels are a measurement used by the United States Food and Drug Administration that indicates how much sugar is dissolved in water. The measurement is defined as a percentage, with 100 percent indicating a pure Brix level of sugar dissolution in water. When the levels reach 100 percent, the solution is considered pure.

It is a measurement used in many food products derived from plants, and the acerola fruit is no exception. The United States Food and Drug Administration requires a 100 percent Brix level for products containing the acerola fruit.

The United States Environmental Protection Agency also has regulations on the acerola fruit, particularly, for fruits in general and the amount of residues of certain chemicals they can contain. The United States is supplied with acerola by Brazil, Peru, and Costa Rica as the locations of more than 20 distributors of acerola to the United States. 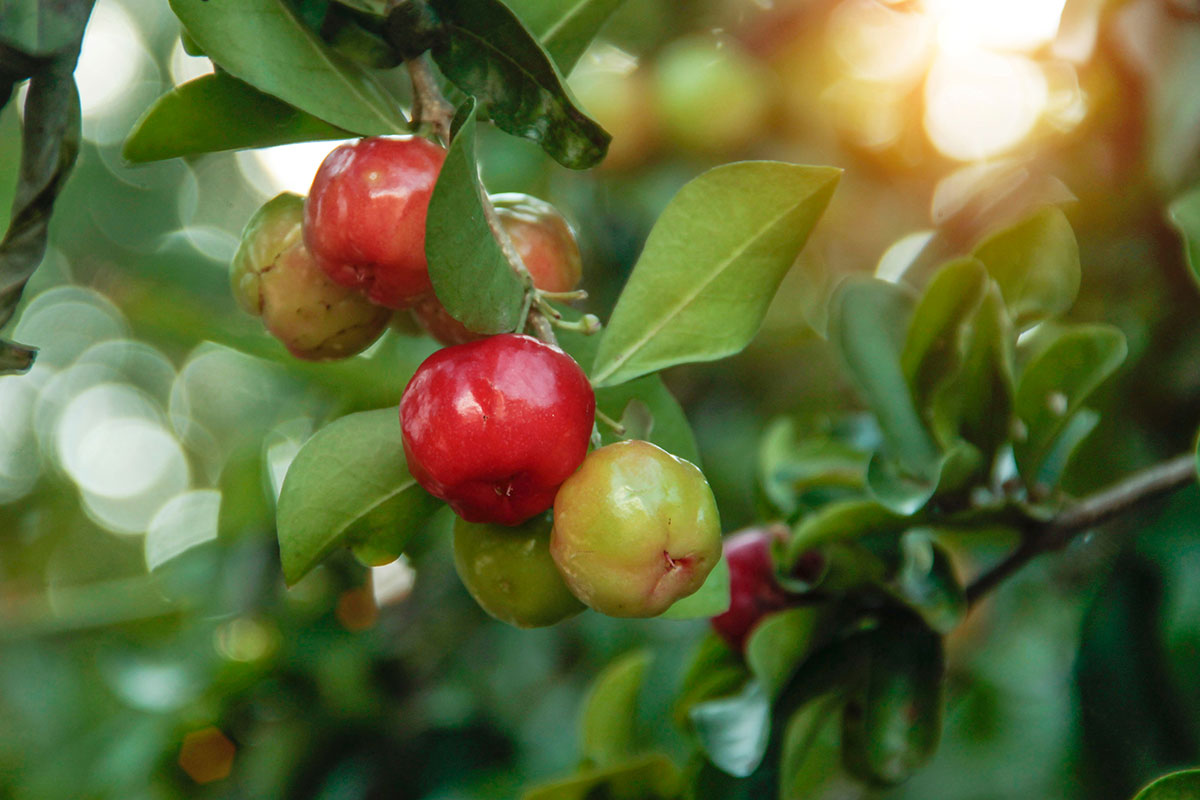 The acerola fruit in Canada is used for a wide range of purposes, but most commonly is used for medicinal purposes. It is also used as a workout supplement for many. Here, it is used both dried and as a liquid supplement to juice or fruit concentrates.

Acerola Fruit in the European Union 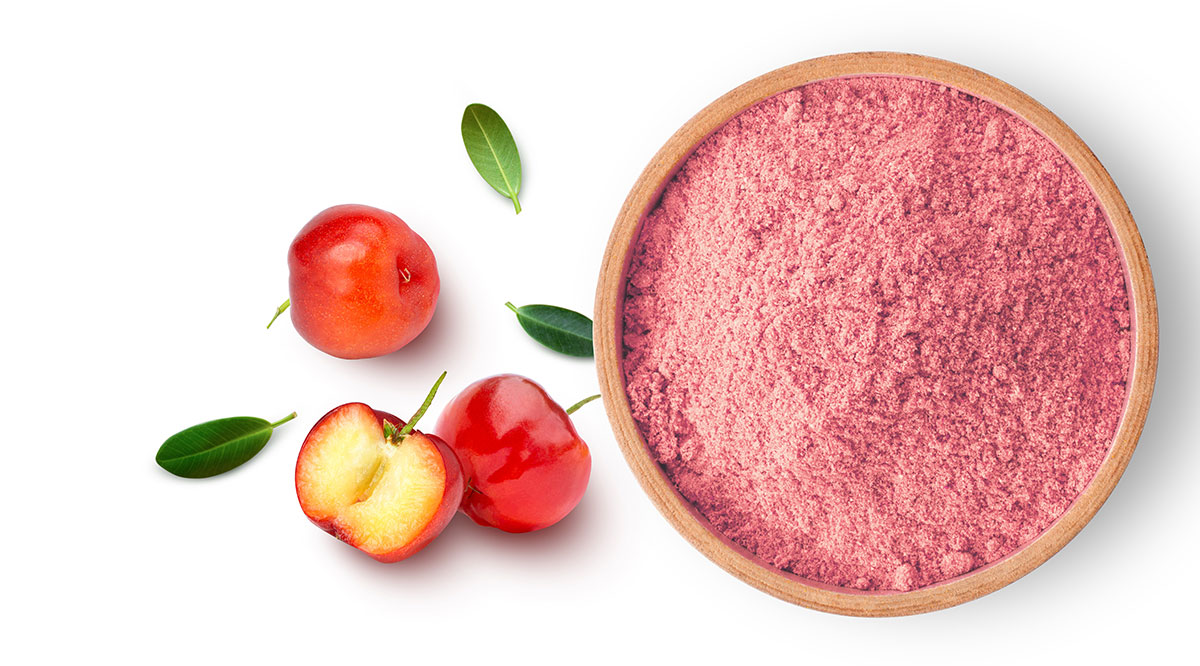 The fruit in the European Union is used very similarly to that in Canada. However, it is not as regulated as it is in Canada. The European Food Safety Authority regulates the use of acerola fruit across Europe and does not give acerola fruit the strength of efficacy that other countries do.

That does not mean that the European Union does not think it is an effective fruit, but just that, it is not being made an official medicinal treatment as it is a fruit and its exact success rates remain unknown.

In the European Union, acerola fruit would be considered to be in the same family of Vitamin C-containing products as citrus. So, a description on a food label where acerola fruit is found would read, “acerola fruit contributes to the reduction of symptoms” or, “acerola fruit can help relieve anxiety and improve the normal functioning of a healthy immune system.”

Acerola fruit is as widely used in Europe as it is in Canada and the United States, but the claims made about it when sold are not written in absolute terms.

Europe also uses the fruit in cosmetics and for many hygiene products. The European Commission Health and Consumers Directorate General will use extracts of the juice of the Barbados cherry in makeup for color. It is also commonly used in hair and skin products in Europe and its effectiveness in improving both hair and skin conditions are known.

Q: How is acerola fruit used when raw?

A: Acerola fruit is a lovely fruit that, like the orange, can be enjoyed raw without discomfort or distaste. It can be used fresh and raw like any other fruit, and enjoyed in desserts or on top of ice cream, or as a side to a meal. The fruit can also be mixed and melted into food and drink, even in spicy dishes such as salsa to balance spicy foods.

Q: When does acerola fruit grow?

A: In seasonal climates, acerola fruit is most known for peaking during the summer months. In climates such as Brazil and California, the growing season is longer.

Q: Is it possible to consume too much acerola?

A: Like any Vitamin C, acerola is water-soluble and is easily and quickly flushed out by the kidneys of the human body. There is no amount of acerola fruit that can be considered dangerous to the average healthy person. Many citrus fruits, however, can pose a risk when combined with certain medications. Talk to your doctor if you have any concerns at all about consuming acerola fruit. Healthy people can safely consume up to 2000 mg of Vitamin C every day, and acerola fruit is the same. You have to eat a lot or consume a large amount of supplements for toxicity to occur, which is very easily treated.

Q: What other nutrients does the acerola fruit have?

A: Like any fruit, the acerola fruit is high in a number of vitamins and minerals, including lutein, thiamine, niacin, beta-carotene, riboflavin, folic acid, and pantothenic acid. All of these nutrients help supplement a healthy diet and can aid in the bolstering of an immune system.

Q: Are there many side effects to taking acerola fruit or eating a lot of it?

A: There are reports that too much acerola fruit can result in severe diarrhea. It can also lead to kidney stones and is not recommended in high amounts during pregnancy or when breastfeeding.