If you’re captivated by the Victorian architecture and unique, offbeat, small-town feel of Eureka Springs, Arkansas, here are 25 other towns that you’ll want to visit. 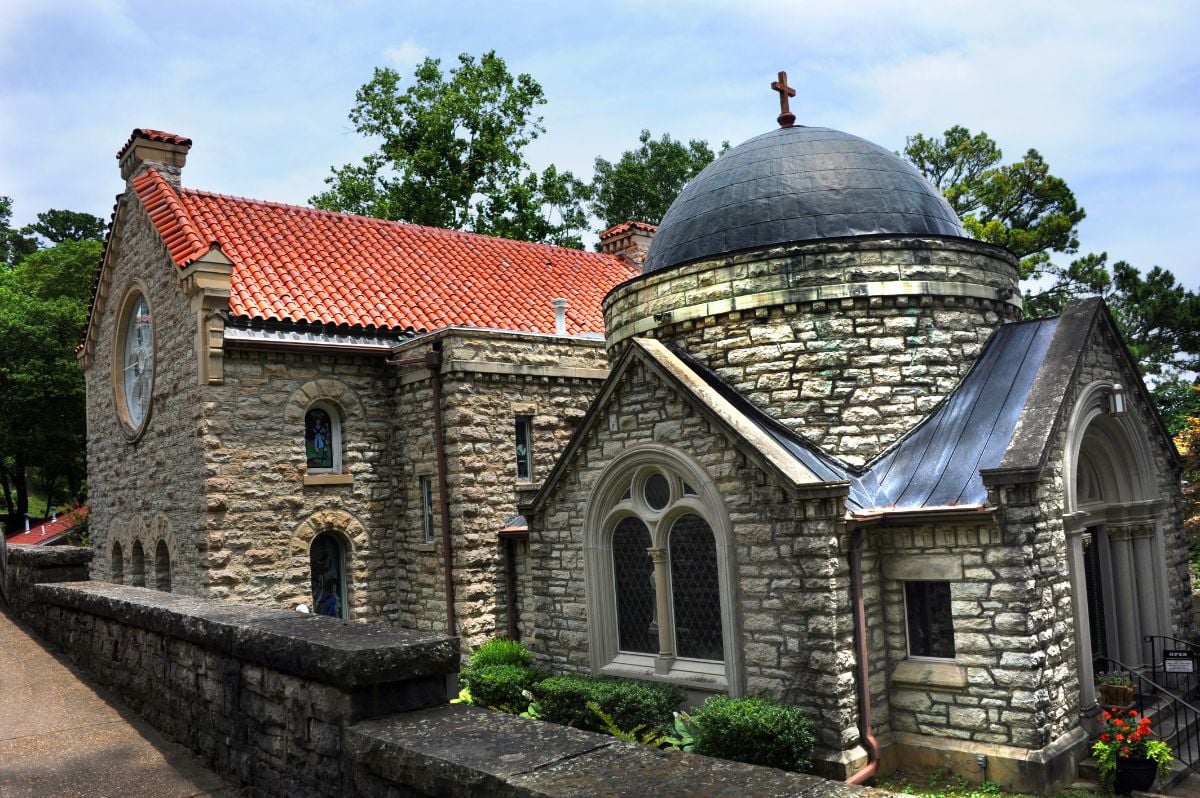 Tucked away in the Ozarks of northern Arkansas, Eureka Springs has a population of just 2,166, and more than enough heart and personality to go around. Eureka Springs can trace its roots back to early American history when Native Americans and Europeans alike sought out its springs for their supposed healing powers. Nowadays, visitors can come to Eureka Springs, not just for the natural wonders of the Ozarks, but to take in its historic Victorian architecture, walk down its windy, cobblestone streets, and enjoy its offbeat, artsy culture.

Eureka Springs is a historic haven for the arts in the middle of the Ozarks that began as a Victorian resort town. The town is home to many art galleries, music venues, and coffee shops, frequently host music and arts festivals, and its location in the Ozarks makes it a great destination for kayaking, fishing, and hiking. If you’d love to visit a place that has all of this, read on to check out 25 towns that have similar attractions to Eureka Springs. 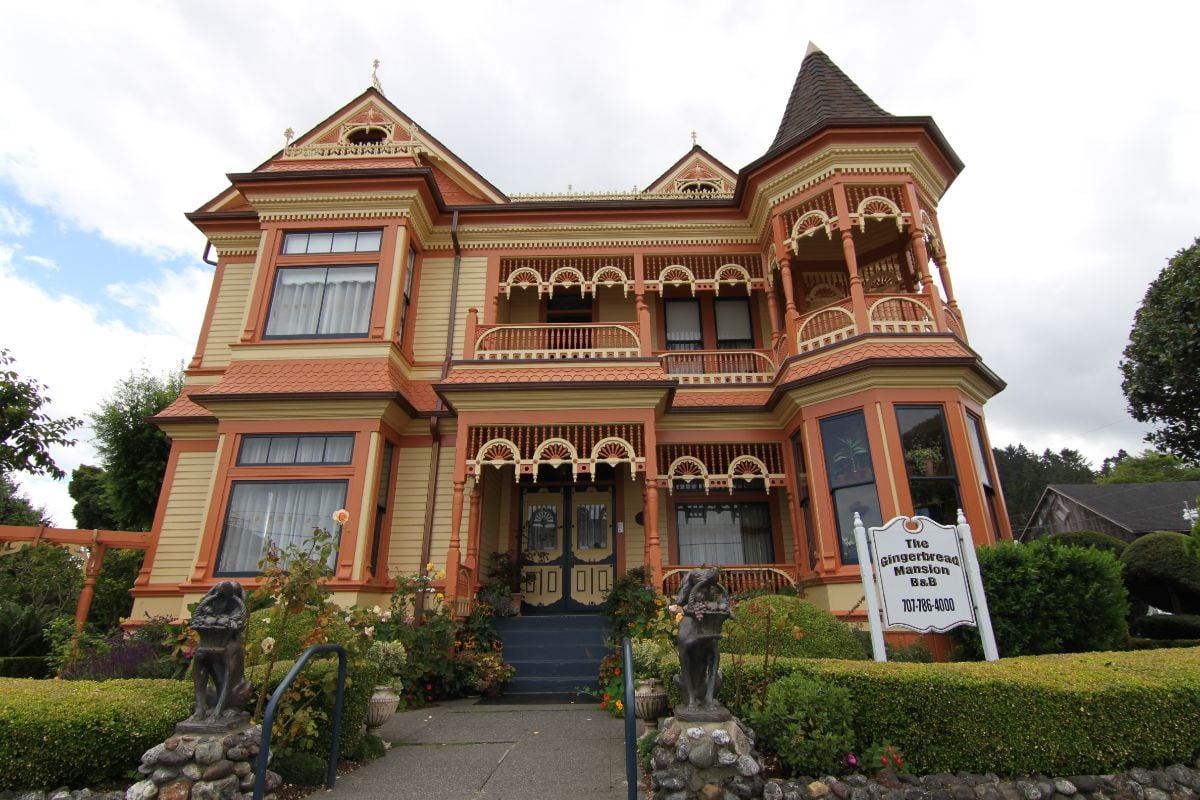 Ferndale, CA is a town of 1,382 on the northern California coast. It has some of the best-preserved Victorian buildings in the US, and it has plenty of small-town charm and quirkiness. Great eateries and B&Bs can be found there, and its proximity to the natural beauty of the Cape Mendocino coastline and the redwood forests of northern California means that there are great opportunities for day trips in the surrounding area. The average cost per night for a trip to Ferndale ranges from $233 to $389 for each person. 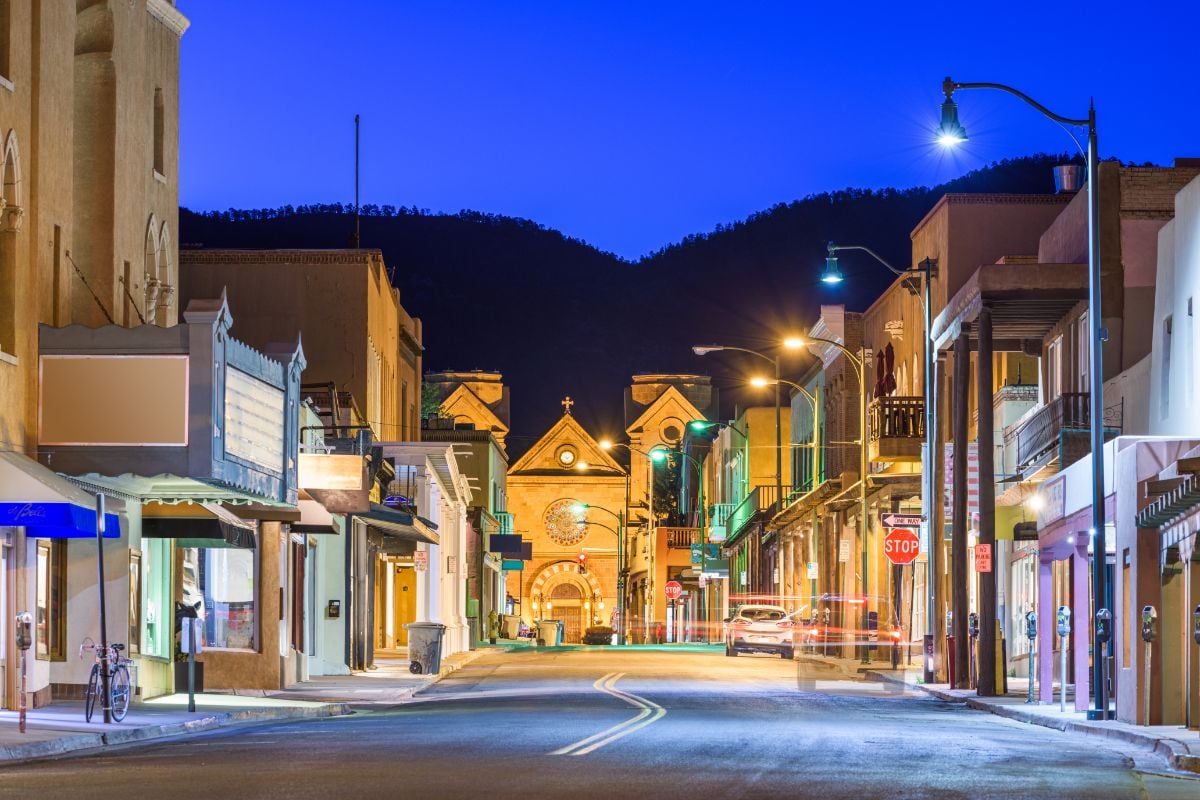 Santa Fe, NM, is a world-famous center for visual arts and sculpture, and it’s got plenty of art galleries and museums. It’s got a thriving local culture with plenty of festivals throughout the year, as well as delicious New Mexican cuisine. It’s also surrounded by the natural beauty of the Sangre de Cristo Mountains and the Rio Grande valley.

Despite its population of 83,299, Santa Fe has the uniqueness and local charm of a small town. Its walkable and friendly downtown area, known as the Plaza, features adobe-style buildings, a cathedral that dates back to the Spanish founding of the town, and shops full of Native American art. The average cost to stay one night in Santa Fe ranges from $176 to $375 for one person. 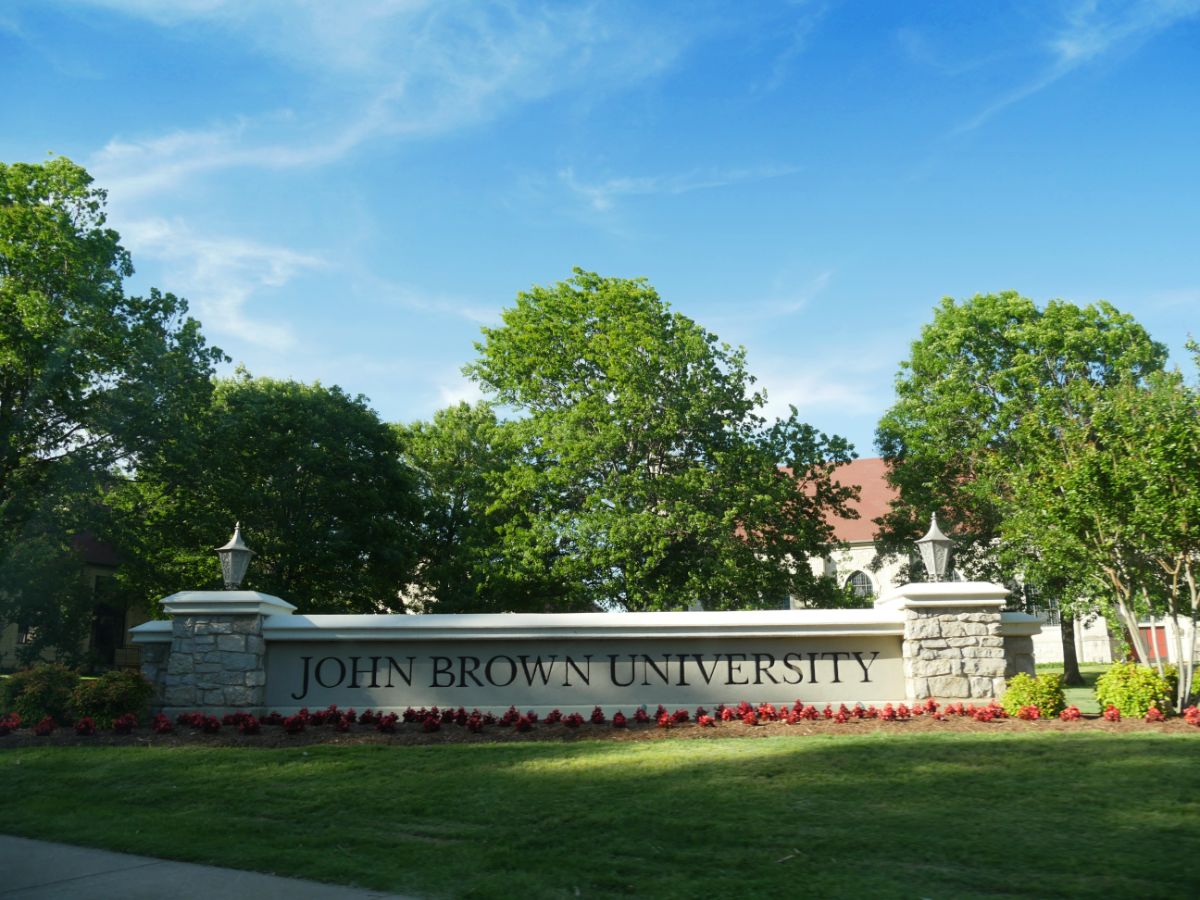 Just like Eureka Springs, Siloam Springs, AK, has a history that stretches back to contact between Europeans and Native Americans. Both groups were attracted to the purported healing powers of the nearby springs, and they used the area as a trading post.

The historic downtown area of Siloam Springs features buildings that played a role in its early history, as well as centers for arts and culture like the Sager Creek Arts Center and the JBU art gallery. It has a population of 17,287, small enough for it to maintain a small-town feel. The average cost per night for one person to visit Siloam Springs ranges from $152 to $306. 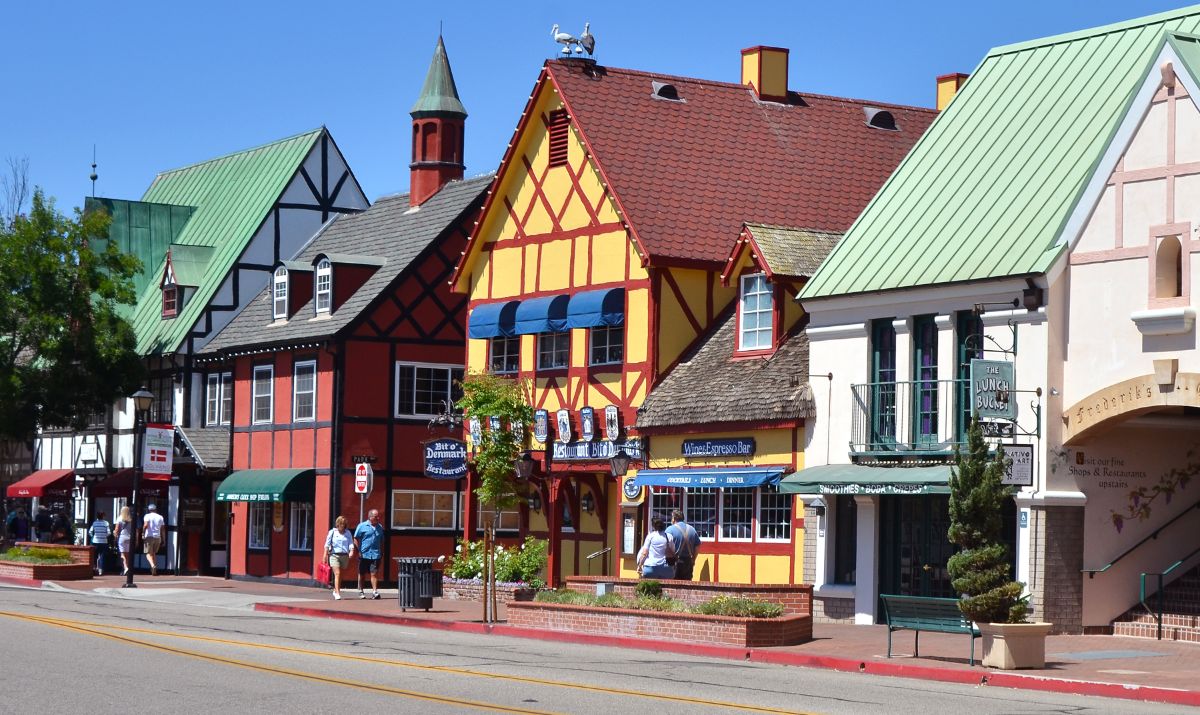 A town that seems like it was transplanted from another time and place, Solvang, CA, is a village founded by settlers from Denmark who brought their traditional building style with them. The town of 5,804 attracts many tourists for its brightly colored windmills and old European-style storefronts, as well as its local culture that still manages to preserve some of the festivals and traditions of the original Danish settlers. The average nightly cost of a trip to Solvang, CA, for one person, ranges from $191 to $484. 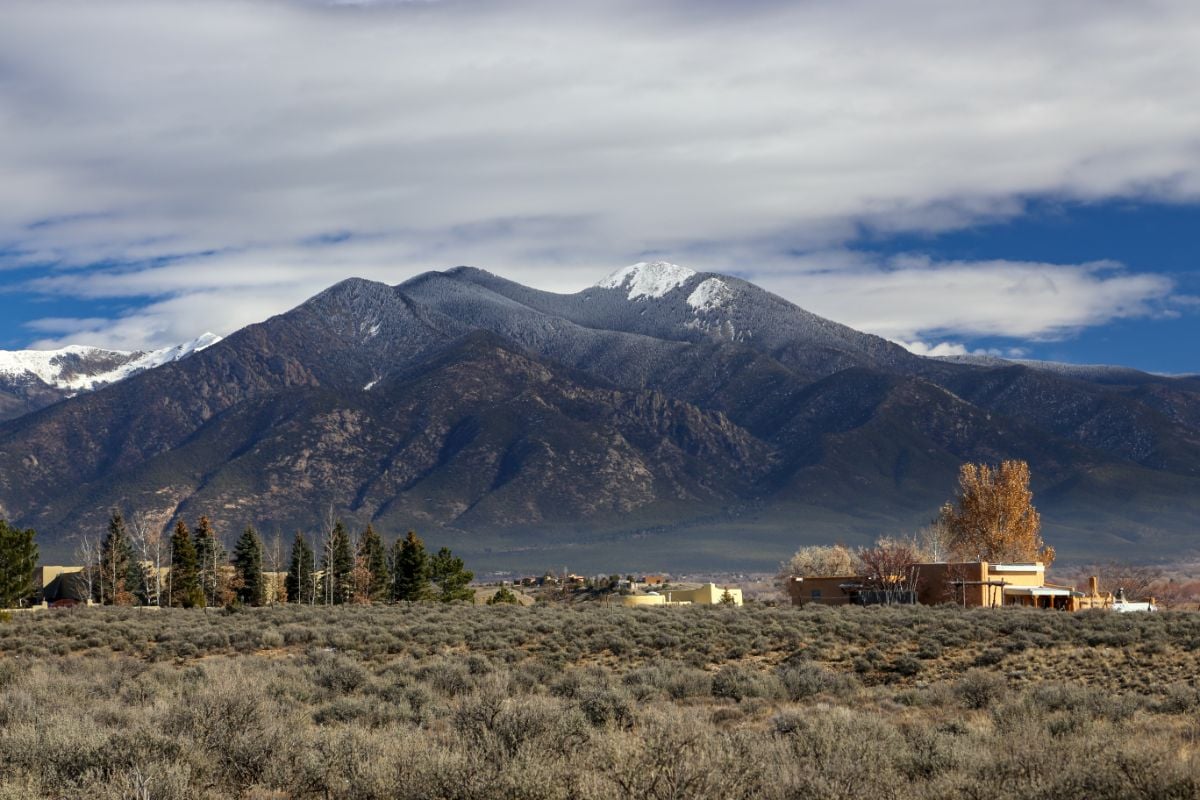 Taos is another bastion of creativity amid natural beauty. A small town of 5,967, it sits at the base of the Sangre de Cristo mountains and is a short drive from the breathtaking Rio Grande Gorge. Its mountainous location makes it a great skiing destination.

Just north of Taos is the Taos Pueblo, a Native American adobe building that is one of the oldest continuously inhabited structures in the world. Taos is well known for Native American-influenced painting and sculpture scenes, which can be enjoyed at places like the Taos Art Museum and the Harwood Museum of Art. The average nightly cost for one person to visit Taos ranges from $171 to $360.

Another historic town surrounded by natural beauty is Winslow, Arizona, home to 9,476 people. Homolovi State Park, The Painted Desert, and the Canyon Diablo crater are all within driving distance of Winslow, which are all sure to satisfy bikers, hikers, and campers.

The town of Winslow itself has a history to explore: the La Posada Hotel in Winslow was built as a stopover on the Santa Fe railroad, and its roaring-20 style is sure to transport you to another time. The town also features the Old Trails Museum, which is dedicated to preserving Winslow’s frontier town history. The average cost for one person to spend a night in Winslow ranges from $194 to $342.

Branson is another Ozark town with tons to offer anyone looking for any kind of diversion—the town of 11,416 has long billed itself as a vacation destination. The town is filled with fun ways to spend the day, like the Hollywood Wax Museum, Aquarium on the Boardwalk, and the World’s Largest Toy Museum Complex, with some attractions that are on the quirky side, like the Ripley’s Odditorium or the town’s one-half scale model of the titanic.

If nature is more your thing, cave tours and ziplining are on offer in the Ozarks. A trip to Branson ranges from $174 to $362 per night for each person. 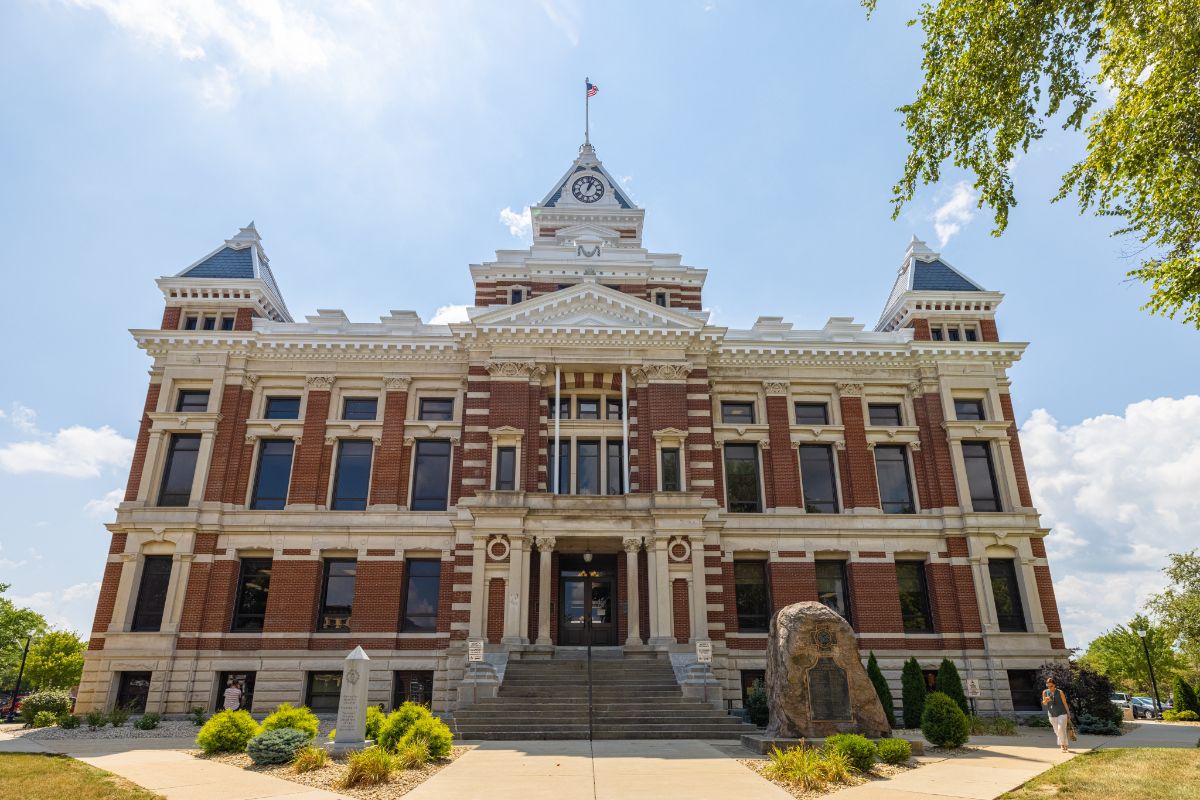 The town of Franklin is a picturesque, middle-American place—it was featured as the ideal town in a 1920’s edition of Life Magazine. Home to 25,313 residents, it has a downtown full of well-preserved old buildings, like the Johnson County Courthouse and the Artcraft Theater, and lovely, walkable neighborhoods. Hikers will enjoy the series of trails that connect the town through the local wilderness, and the average cost per person to spend a night in Franklin ranges from $89 to $110. 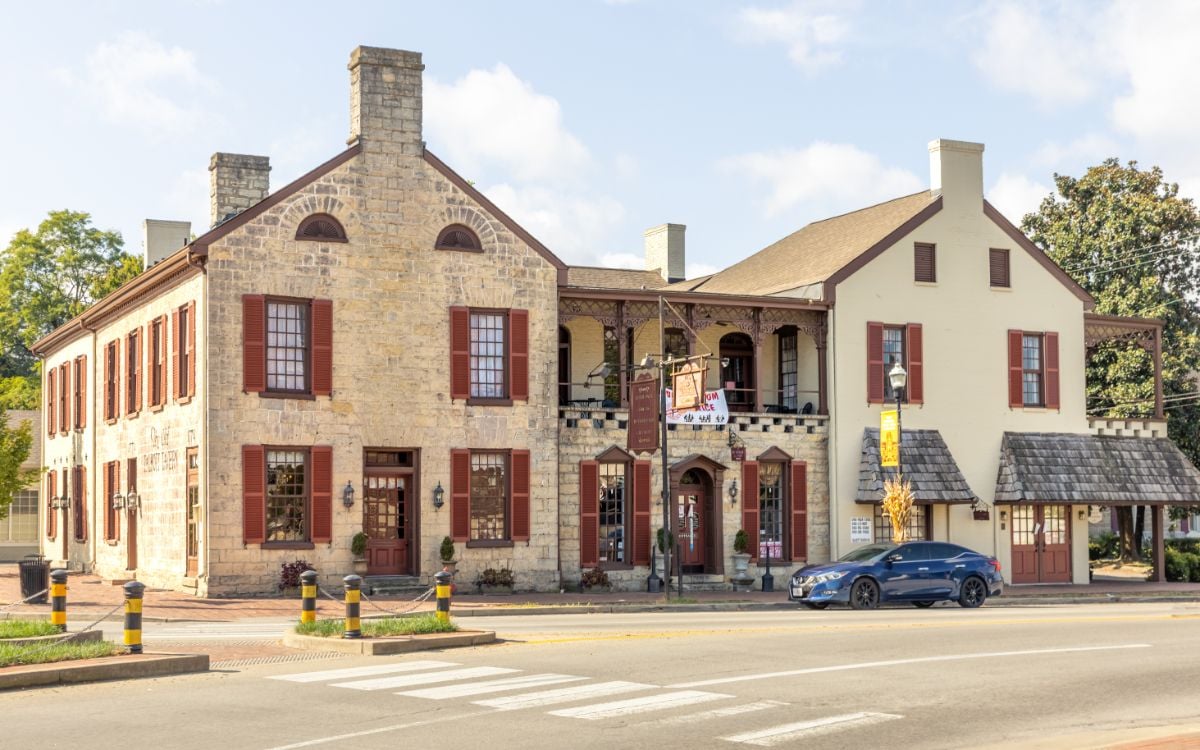 Bardstown, Kentucky, a town of 13,094, is a great place to find that feeling of being transported back to another time. Full of buildings from America’s past, the town is on the National Register of Historic Places and features pieces of history like the Old Talbott Tavern, a bar built in 1779 that is said to have served famous outlaw Jesse James, pioneer Daniel Boone, and Abraham Lincoln before he became the 16th president. One of the first major Catholic dioceses in the US, the Basilica of St. Joseph Proto-Cathedral, can also be found in Bardstown.

Bardstown is world-famous for its bourbon and is home to several historic distilleries that are a must-visit for those who enjoy fine whiskey. Nature lovers will enjoy the nearby Bernheim Arboretum and Research Forest. The nightly cost of a trip to Bardstown for one person ranges from $168 to $311. 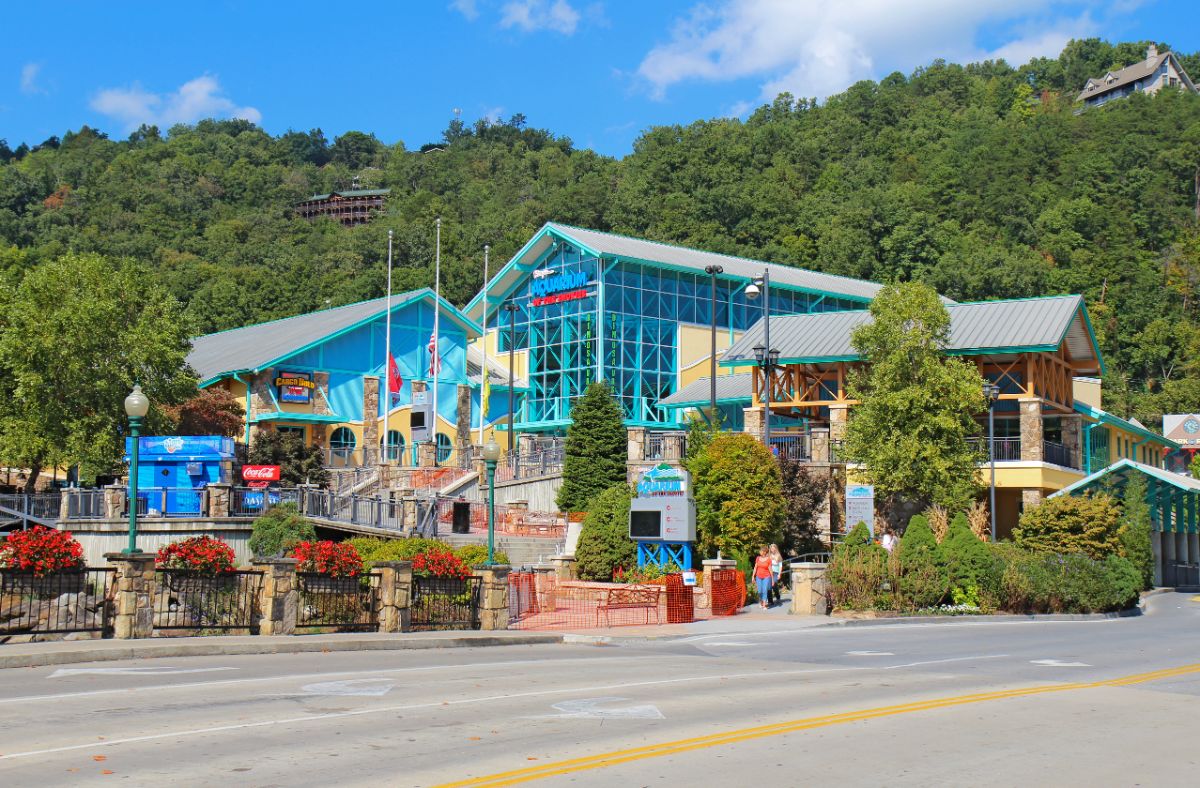 A town of just 4,044 permanent residents that’s long been a vacation destination because of its location in the Ozarks, Gatlinburg provides a broad, tourist-friendly appeal with small-town, local charm. Its main street features brightly colored storefronts and restaurants built in an old-fashioned style, and visitors can enjoy anything from the Gatlinburg Space needle to the Ripley’s Believe-It-Or-Not Museum. Other notable attractions include the Gatlinburg Skylift and the Gatlinburg Arts and Crafts Community.

Hikers and nature enthusiasts will enjoy the nearby Great Smoky Mountains, National Park. For those interested in history, Gatlinburg has plenty to offer—Gatlinburg had a role to play in the lives of Native Americans and in the Civil War. The nightly cost to spend a night in Gatlinburg for one person ranges from $155 to $363. 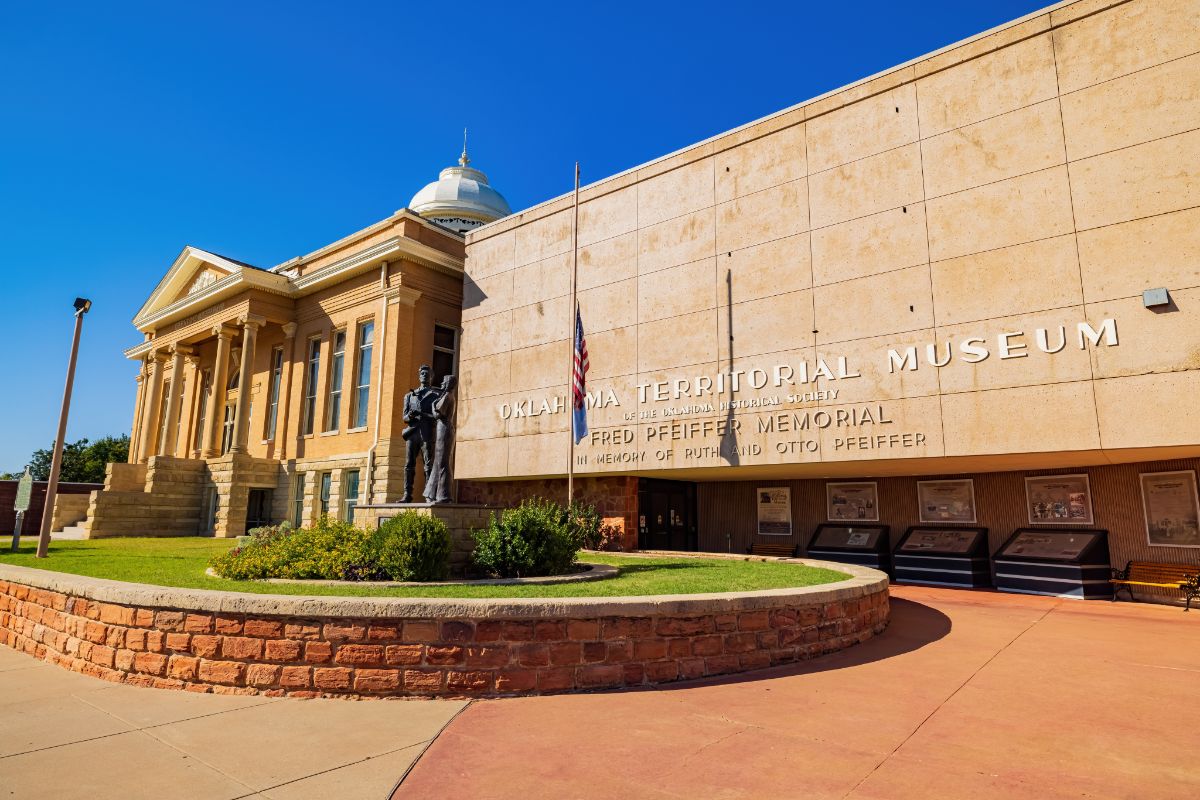 Guthrie is well-known as an enclave of preserved Victorian buildings—walking down its downtown is like stepping into the 1890s. The town of 10,191 is the largest Historic District in Oklahoma, and if you want to learn more about the town’s history, you can check out its Oklahoma Territorial Museum and Carnegie Library. The cost of a trip to Guthrie ranges from $150 to $277 per night.

This small Kentucky town of 11,447 has a rich history and is surrounded by natural beauty. It’s right next to both the Daniel Boone National forest and Lake Cumberland, which is sure to satisfy lovers of hiking, camping, fishing, and boating.

The town itself has both a Civil War and frontier history. Legendary outlaw Jesse James once visited the town, and a civil war skirmish was fought near Somerset in what is now Nancy, Oklahoma. The cost per night of a stay in Somerset ranges between $166 and $404 for one person. 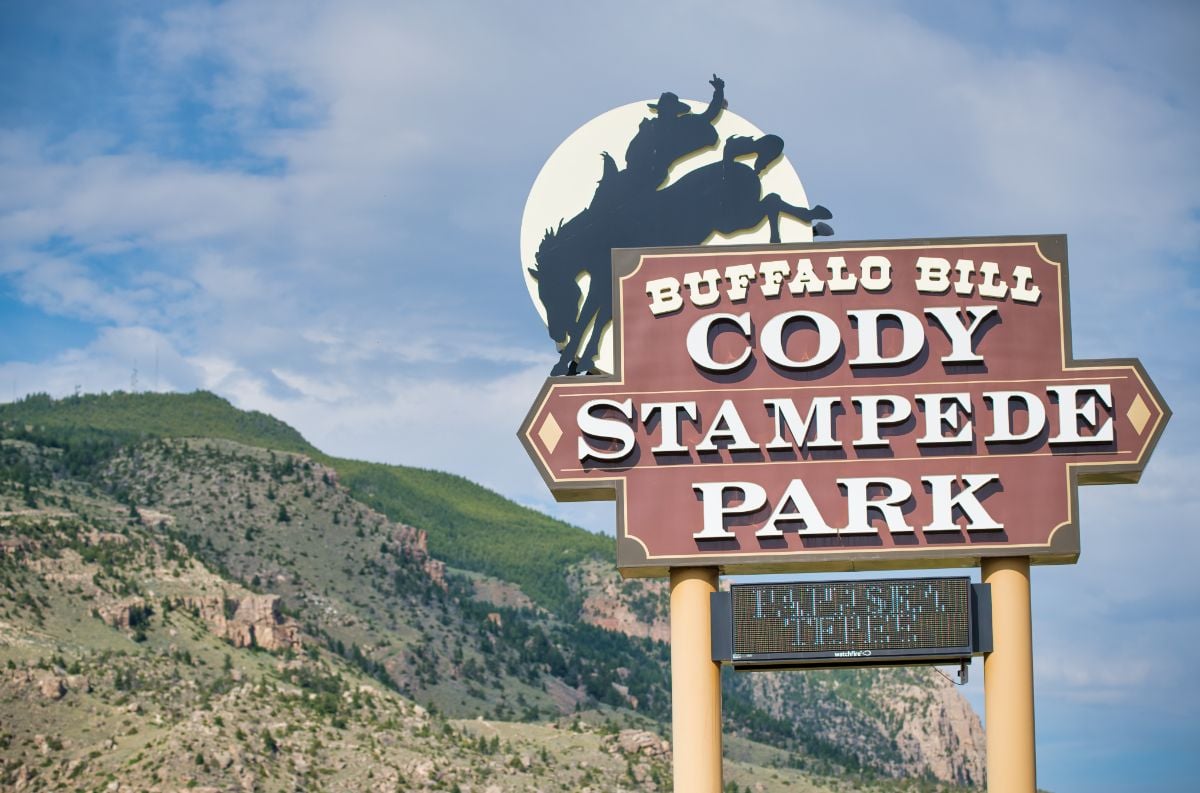 Cody has an authentic, Old West feel, with some original buildings from the 1800s still standing. This town of 9,520 sits near Yellowstone national park and is a well-known destination for outdoor recreation of all kinds, including kayaking, canoeing, biking, horseback riding, fishing, and hiking.

Cody was founded by legendary outdoorsman and pioneer Buffalo Bill, and you can explore its connections to the frontier era of American history at the Buffalo Bill Center of the West. The town is also known for its visual artists, and you can view their work at its art galleries. A trip to Cody costs somewhere between $205 and $378 per night for one person.

This small-ish town of 66,846 is famous for its vibrant arts scene that dates back to the 1920s when visual artists started to cluster in the town. This legacy can now be enjoyed by walking the Delray Beach Art Trail, a collection of artworks put on by local artists, or by simply walking around its downtown and checking out its local galleries.

Delray Beach is also right on the southeast coast of Florida, so it has a wonderfully temperate climate and beautiful beachside views. A night in Delray Beach costs between $213 and $382 per traveler.

Sag Harbor is a town of 2,169 on the eastern edge of Long Island with a long and rich history and many well-preserved historical buildings that reflect that history. Settled all the way back in 1709 by the English, Sag Harbor was a stage for the revolutionary war, and famous author Herman Melville once spent time there. Its buildings have architecture from many periods of history, like the Old Whaler’s Church with its Egyptian Revival style spire that’s still standing.

Sag Harbor features a few local nature preserves which help keep its beautiful coastal wetlands intact, and if you enjoy nature, you’ll want to visit them. The average cost per person for a night in Sag harbor ranges from $151 to $210. 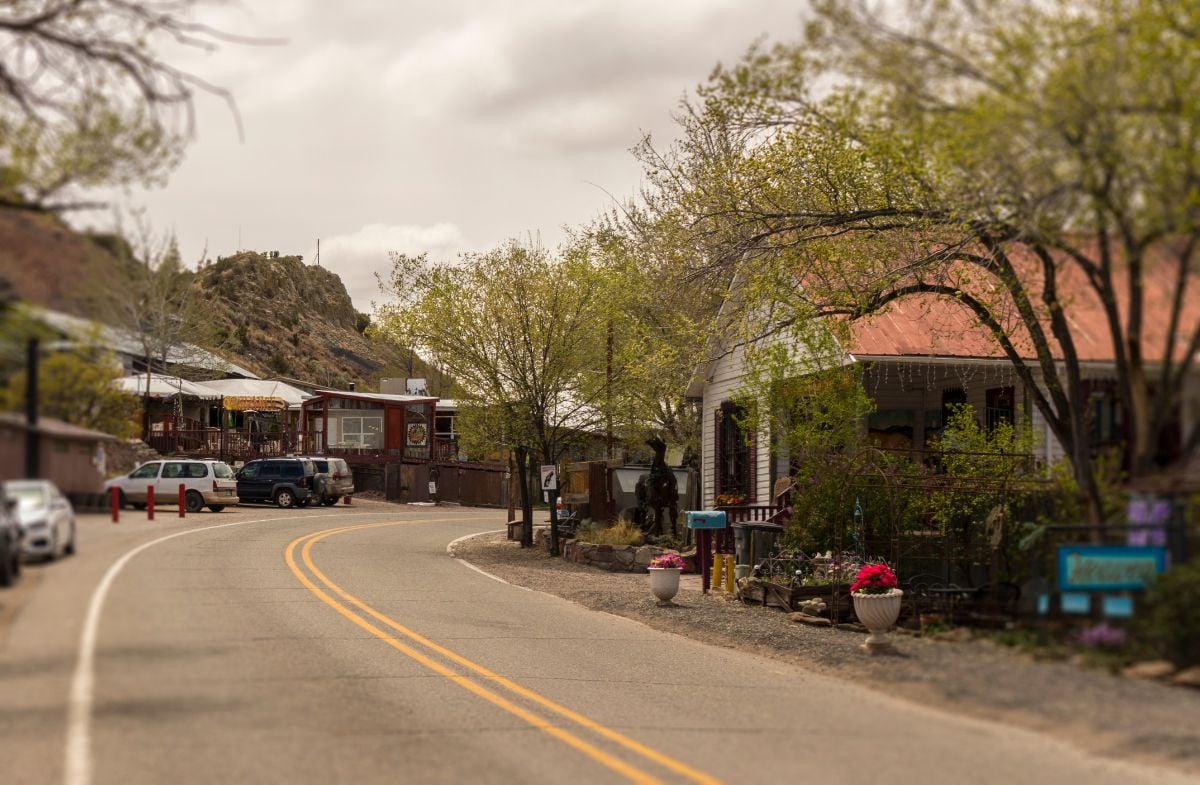 A tiny town of just 218 permanent residents, Madrid sits in the expanse of New Mexico’s beautiful high desert ecosystem. Once an abandoned coal town, newcomers revitalized it in the late 1900s, and Madrid is now a community for artists that attracts creative people from all around the state.

Madrid’s downtown features many galleries with Native American-inspired art, music venues, and a museum that chronicles its transformation from a mining town into a ghost town, and finally into an artist’s haven. 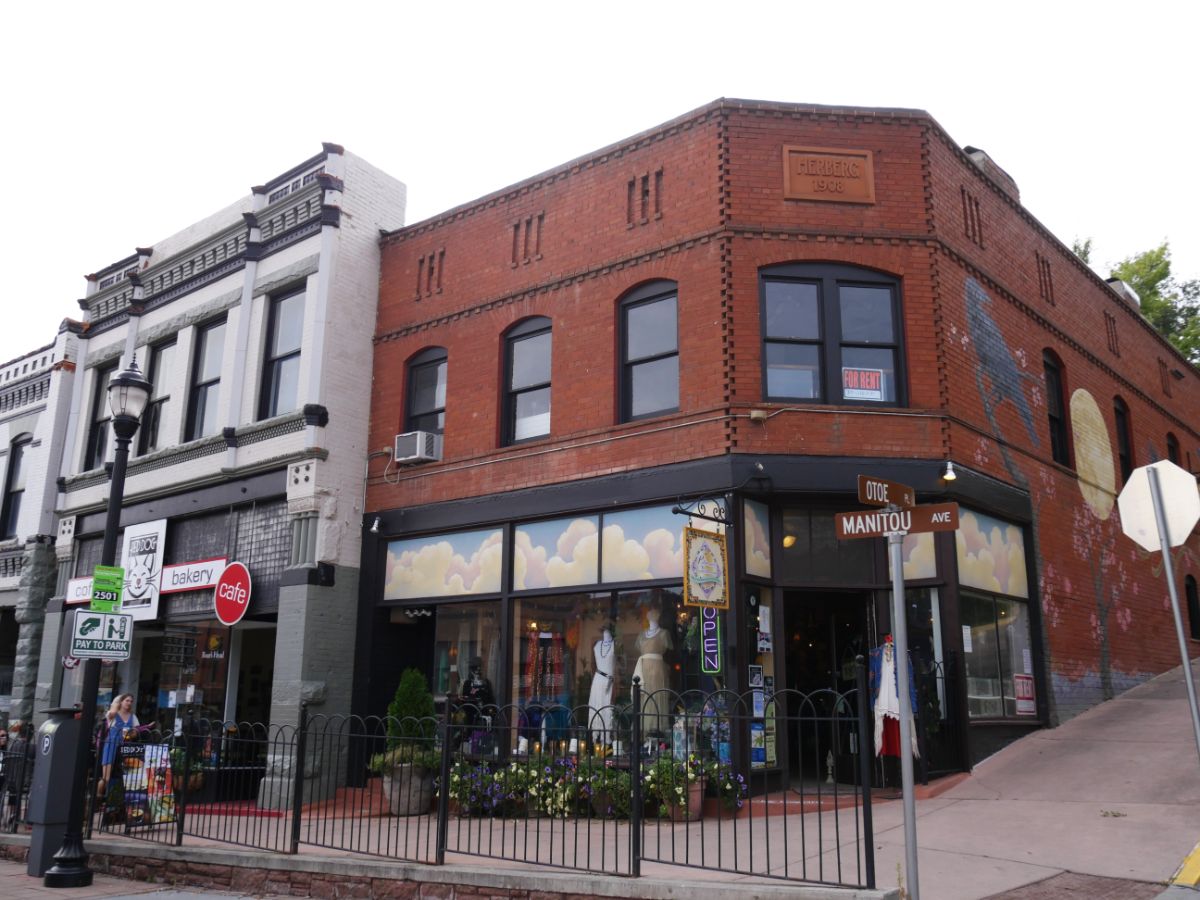 Founded in 1872 as a health getaway just below Pike’s Peak, Manitou Springs developed into a charming, artistic, and outdoorsy place. This town of 4,992 is full of fun galleries, boutiques, delicious wine, and great food. You can also find more nightlife than a town of this size has a right to offer.

Since it’s at the base of Pike’s Peak, Manitou Springs has become renowned hiking and trail running destination. Its health-conscious identity also extends to its spas and healing mineral springs. The average cost per day for a trip to Manitou springs is between $175 and $305 per person.