It seemed too good to be true. Even though I’m not an avid woodworker, I figured if I made one or a few of the projects from the kit it would be money well spent.

My curiosity got the best of me. I bit the bullet and bought it. They offer a refund so I figured if it was totally worthless I could ask for my money back.

Is is too good to be true?

Some of the plans are so bad but are included just to beef up the sales pitch of “16,000” plans.

And then some of the plans are great. Some are okay. I’m not surprised it’s not perfect. It’s a massive collection and mishmash of different plans for all kinds of products.

Here’s the mindset you should have if you buy Ted’s Woodworking. Accept the fact you won’t like every plan. In fact, accept you will probably not do 90% or more of them for any number of reasons such as the plans are bad and/or they aren’t projects you wish to build.

BUT, the few plans that you do like and that are decent quality, if you build them, will be make the cost of this digital collection of woodworking plans worth it.

Will I ask for my money back?

No. It’s worth the price I paid. Sure, I could ask for a refund and probably get it and still keep the plans (they’re digital in PDF form); however, that’s not my style. If I deem something worth the money I paid, I don’t ask for a refund. I’m pretty confident I’ll get my money’s worth in the long run.

Moreover, I’m assured in my Ted’s Woodworking member section that I’ll get access to new plans that are added in the future. Of course I have no idea if this will happen.

Is Ted’s Woodworking just a bunch of ripped off plans?

Some people online have suggested that Ted’s Woodworking plans are blatantly ripped off from a myriad of sources and put together into a mega digital “plans product”. In other words, they allege Ted’s Woodworking is a massive copyright infringement.

Is Ted’s Woodworking a copyright infringement product (i.e. a scam)?

I don’t know. It’s possible, but I don’t know so I’m not going to speculate. Any digital product could be.

It’s very possible Ted obtained a license to sell each plan and/or the plans are in public domain and/or Ted came up with some of the plans. I have no idea, but I never investigated with a fine-toothed comb either (who has time for that)?

Who should buy Ted’s Woodworking?

This is for people who like DIY projects. Most of the plans are labeled “beginner”, “intermediate” or “advanced” which is helpful.

Even if you’ve never built anything or done any woodworking, this is a pretty good set of plans to get going with because there are beginner projects included.

You can build all kinds of stuff for your home. See the list of plan categories below.

At the end of the day, if you do the odd DIY project or dabble in woodworking, this is a decent set of plans to have in your inventory.

I haven’t counted to see if there are 16,000 plans, but I confirm there are a lot of them.

Fortunately they are well organized so you can find exactly what you’re looking for.

Here’s are the plan categories:

There are quite a few plans in each category. 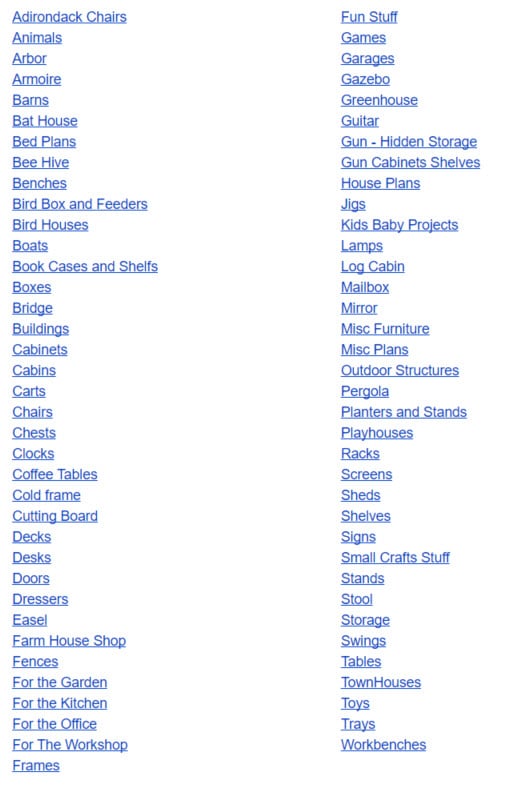 Here are just a few examples of the plans (so you can see what to expect):

Ted’s Woodworking is delivered as a PDF download. It’s actually a series of PDF downloads (see plan categories above).

Some great woodworking plans:  Obviously if a plan is something you want to build and the plan is detailed enough so that you can complete the project it’s good.

However, some of the projects are old and the plans are poor quality… so bad you’ll probably just ignore them.

On the PLUS side, there are many excellent projects worth building. For example, the loft bed plan above is excellent (one of many).

Well Organized:  I was relieved after buying Ted’s Woodworking that I didn’t have to sift through thousands of PDF pages. Instead, Ted at least put some effort into organizing the plans in many categories. This made finding some decent plans very easy.

In fact, the members’ area is really easy to use and well organized.

Good value for money:  One or two completed projects from this product makes it worth the money. I have no doubt I’ll get my money’s worth in the long run and I’ve yet to check out every single plan included. I’ve found enough quality projects that I’m satisfied with the product value given it’s fairly low cost.

Cost:  It’s not very expensive. Since it’s a digital download, you don’t have to pay for an expensive book, which is fantastic.

Inspiration:  One benefit of there being so many plans is simply by combing through the plans I came up with new project ideas I hadn’t thought of before.

Some terrible plans:  Unfortunately some of the plans are terrible which means you have to spend some time filtering through the bad plans. I would prefer a product with fewer plans with each one be high quality.

Woodworking Videos:  These are a joke. Fortunately it’s just a bonus so I didn’t care. I think these weaken the product. The videos are primarily from YouTube. Ted simply combed through YouTube looking for woodworking videos and put them in the members’ area. I checked out a few of the videos and they weren’t worth watching.

Overall, I’m satisfied. I found several projects worth doing and the plans were sufficiently detailed that I’d be able to build them.

It’s a great inventory to have on hand even though I have no immediate need. If ever I wish to build something, I have a good set of plans to check out.