Our recipe for Summer Blueberry Layer Cake takes advantage of the tangy sweetness of these delicious berries. Berries are included in both the cake batter and in the icing, and you can get the wonderful flavor of blueberries without the addition of artificial flavors. This cake has a beautifully colored icing, with the blueberries contributing their gorgeous purple coloring in the icing.

Blueberries are a fruit that is native to North America, and they were utilized by the Native Americans as a source of food. After Europeans came to North America, they carried the useful bushes all over the world. North American blueberry producers grow almost 240 thousand tons of blueberries every single year. United States farmers are the top producers of these tasty berries, followed by those from Canada.  Blueberries grow on spreading bushes, and they bear their royal blue colored berries from May to early July. 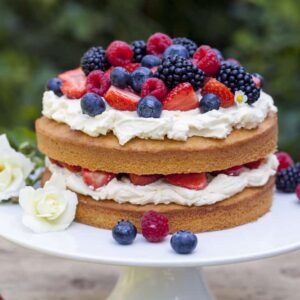 April Freeman
With a beautiful purple icing atop a moist, lightly sweetened cake, our recipe for Summer Blueberry Layer Cake is a tangy, delicious dessert that is perfect as a summer treat. This cake is fairly simple to make but comes out absolutely beautiful, and you don’t have to have any cake decorating expertise at all.
Print Recipe Pin Recipe Add to Collection Go to Collections
Prep Time 1 hr 40 mins
Baking Time 25 mins
Total Time 2 hrs 5 mins
Cuisine American
Servings 10 Slices

Did you know that blueberries are considered “super foods?” The title of a super food goes to foods that contribute great amounts of beneficial nutrients to the human diet, and blueberries definitely fit the bill. Blueberries can improve your cardiovascular health, lower your risk of heart disease, and reduce your chances of developing cancer. They are also high in potassium and vitamin C. Blueberries are low in calories and may help you avoid developing a urinary tract infection.  Eating a single bowl of blueberries each day can help you lower your risk of developing diabetes and obesity. They even benefit your immune system. Overall, you can’t go wrong including as many blueberries as you want in your diet.
Keyword Dessert, Dinner Recipe, Summer Blueberry Layer Cake