With a golden brown, crispy crust, our recipe for Southern Style Cornbread is a great accompaniment for soup or stew on a cool night. To create the perfect texture, bake the bread in a preheated, well-oiled cast iron pan. This gives the finished product a golden color and delicious crust. 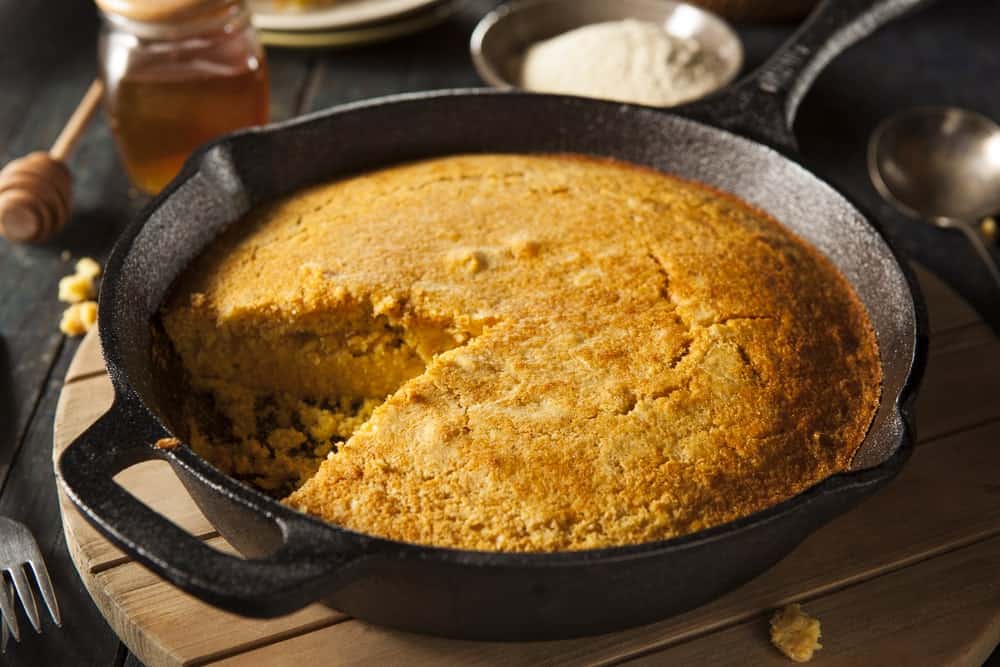 Cornbread has been cooked on the North American continent for centuries since the Native Americans who originally lived here based most of their bread recipes on corn. Basic Native American cornbread consisted of coarsely ground cornmeal that was created when the Indian women crushed the grains of dried corn between two large, flat rocks.

This cornmeal was mixed with water and salt, so their bread was likely very dry and not very good. When European colonists came to the New World, they used Native American recipes and began to improve upon them by adding sweeteners like honey or sugar. Often they would use milk to create a more tender cornbread.  By the time of the Civil War, various cornbread recipes were used all over the United States. 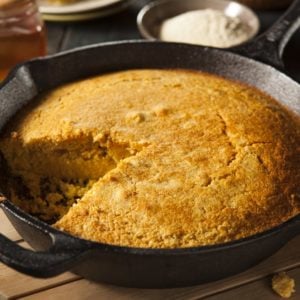 April Freeman
A quick bread that perfectly pairs with stews and chilis, Southern Style Cornbread brings great texture, color, and flavor to the table. Many people think that cornbread has to be dry, dull, and tasteless, but our recipe is moist, tender, and just a little bit sweet. Next time chili is on the menu, try our recipe for Southern Style Cornbread.
Print Recipe Pin Recipe Add to Collection Go to Collections
Prep Time 10 mins
Baking Time 20 mins
Total Time 30 mins
Cuisine American
Servings 6 People

Geographical differences in the United States influenced the types of cornbread created in the early years of United States history, most of it dependent on the type of corn grown in a particular area. In the Southwest, blue corn was often ground up for the cornbread eaten there, while in the Southeastern United States white cornmeal was used. In the Northeastern United States, yellow cornmeal was the key component of their cornbread. Often, in the Northeastern United States, sweeteners like honey or sugar were added to the cornbread batter, while in the South, it is still taboo to have sweet cornbread. Our recipe does use a little bit of sugar in the batter. However, if you love Southern Style Cornbread, rest assured that this is not an overly sweet cornbread. We feel that the balance is perfect. Additionally, we use buttermilk in the batter. The buttermilk adds fat and moisture to the cornbread so that it doesn’t get too dry and coarse in the baking. One highly recommended cooking technique for Southern Style Cornbread is to make it in a cast-iron skillet. Not only is this an authentic baking method that your Great Grandmother would have used, but it also creates a lovely crisp crust on the outer layer of the cornbread. To increase that delicious texture, in our recipe, the cast iron pan is preheated in the oven and a few tablespoons of oil are in the skillet as it preheats. When you add the batter to the hot oil, it will sizzle, and that is where the magic happens. Of course, you can use another kind of pan besides cast iron, if you don’t have a cast-iron pan. A cake pan or another skillet will do in a pinch. However, use the heaviest pan that you can find because the heavier the pan, the better the cornbread will bake.
Keyword Bread, Recipe, Side Dish