With a creamy texture and a nutty flavor, blackeyed peas are a Southern favorite. And yet, wherever you live, you can still enjoy dish of these tasty legumes by using our recipe for Southern Style Blackeyed Peas.

Despite the name, blackeyed peas are not actually a member of the pea family. These tasty vegetables are actually members of the bean family, also called legumes. Cultivated in the Far East since prehistoric times, even the Greeks and Romans enjoyed blackeyed peas. Eventually, the beans were carried by various people groups to Africa.

When certain people groups were captured in Africa and transported to the West Indies as slaves, they took this dietary staple with them. Soon the descendants of those slaves were taken to plantations in Georgia and South Carolina in the United States. Of course, they brought the seeds for blackeyed peas along. Eventually, all people in these areas began enjoying these nutty-flavored beans with a creamy texture. 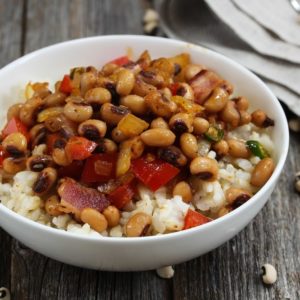 Blackeyed peas are very nutritious. On their own, they have no fat and no cholesterol. Eating just half a cup of blackeyed peas counts as a serving of protein according to the USDA. These beans are loaded with potassium, iron, and fiber, and they are very satisfying and tasty as well. People in the South add a variety of things to their blackeyed peas recipes for additional flavoring. Most recipes include garlic, onion, and salt. Additionally, meats like pork jowl, ham hocks, or chopped ham add to the meaty flavor that many people prefer in their blackeyed peas. In some areas, hot sauce or hot peppers are added to give a little extra zing to the blackeyed peas. According to Southern tradition, blackeyed peas are eaten as a portent of good fortune in the coming new year. Several variations on this theme exist. Some people cook their blackeyed peas with greens and say that the greens represent the paper money one would earn in the next year and the peas represent the coins that one would earn. Often, people serve blackeyed peas with cornbread, which is supposed to represent gold earned in the new year. Other people believe that for each blackeyed pea that one eats on New Year’s Day, one day of luck is ensured in the upcoming year. This means that each person should eat at least 365 blackeyed peas on New Year’s Day to ensure a full quota of lucky days over the course of the year. Some people cook a new penny with a pot of blackeyed peas. The person who ends up with the penny in his or her bowl will end up with an extra measure of luck in the New Year. Food historians think that the practice of eating blackeyed peas for good luck on New Year’s Day began during the Civil War. The Confederate troops, lacking supplies when Sherman razed certain areas of the South, had nothing left to eat but the blackeyed peas that the Northern troops ignored, thinking that the fields of blackeyed peas were merely food for livestock. The Southern troops felt that it was fortunate that they had something left to eat, and so the legend of eating blackeyed peas for good luck was born. You may never be in the position of having nothing but blackeyed peas to eat, but that doesn’t mean that you won’t enjoy this delicious and economical dish for dinner tonight.
Keyword Recipe, Side Dish, Southern-Style Blackeyed peas

See More RecipesClick Here for All Our Recipes
178 shares