Loaded with delicious Italian flavor, our recipe for Slow Cooker Pasta E Fagioli Soup is a perfect dinner choice for a raw winter evening. You can prepare the soup in the morning before you leave for work. When you return home, the house will be filled with delightful Italian fragrances. 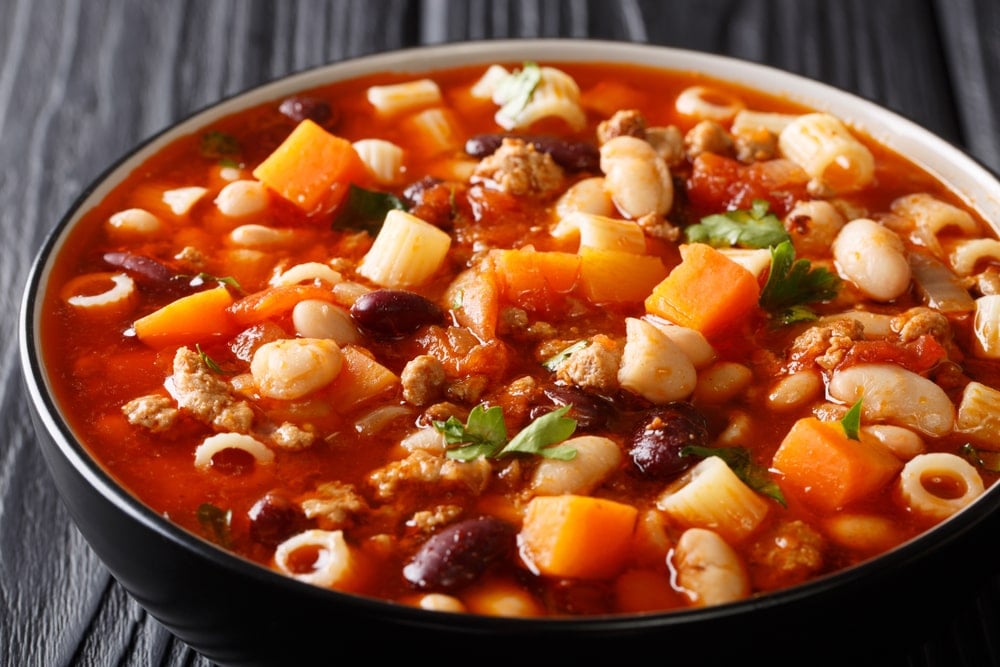 While there are many variations on this recipe, our version of Pasta E Fagioli features ground beef or Italian sausage and piles of veggies, not to mention the mainstays of pasta and beans. Adapting recipes to use what is available fits into the Italian spirit of cooking. Every region of Italy has its own version of Pasta E Fagioli. Some places serve a strictly vegetarian version, while others include ground pork instead of beef.

Pasta E Fagioli has been made in Italy since the time of the Roman Empire. At that time, the only version of beans available to Romans was the humble black-eyed pea which came to Italy by way of Africa. Not long after European explorers made their way to the North American continent, Pope Clement VII introduced North American beans to the Italian people. This happened in 1528. 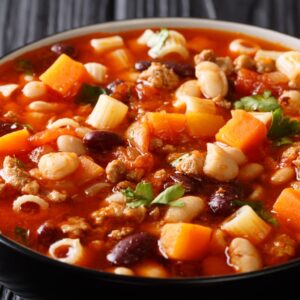 April Freeman
A “peasant” recipe that originated in Italy, the name Pasta E Fagioli means “pasta and beans.” This recipe has been popular for hundreds of years in Italy because it is so delicious, easy to make, and inexpensive. For just a few dollars, a whole pot of this soup can be created, and it makes enough to feed a large crowd.
Print Recipe Pin Recipe Add to Collection Go to Collections
Prep Time 15 mins
Cook Time 6 hrs
Total Time 6 hrs 15 mins
Cuisine Italian
Servings 4 People

At first, the “new” American beans were eaten only by the wealthy who could afford to buy and grow the new “exotic” vegetables. Poor people were still stuck eating the “old-fashioned” blackeyed peas. However, eventually over the years, everyone was able to grow and use the new beans like Borlotti or Cannellini beans. Nowadays, very few people in Italy use blackeyed peas in their cooking at all. Almost every version of Pasta E Fagioli is created with beans that are North American in origin.  Our recipe for Slow Cooker Pasta E Fagioli is quite delicious. We add the cooked pasta at the end to make sure that it does not get overcooked in the long, slow cooking time. However, did you know that this recipe is even better the second day after it is cooked? Putting it in the refrigerator overnight allows the flavors to blend and intensify. If you plan on saving the soup for another day, do not add the pasta to the whole pot of soup. Simply cook the pasta separately from the rest of the soup and add the pasta to each bowl of soup as you dip it out. Storing pasta in the fridge in the soup pot means that it will slowly get soggy and slimy.  If you are serving a vegetarian diner, you can still serve this recipe for Pasta E Fagioli. There are so many flavors in this soup recipe, that you will not miss having meat in the soup. Just leave the beef out, and it will still taste great. Brown the onion and garlic together and continue with the recipe, cooking it for the same amount of time. Additionally, you should substitute vegetable broth for beef broth. You may want to add an extra can of beans to make up the bulk of the soup that will be missing when you omit the beef.
Keyword Pasta E Fagioli Soup, Slow Cooker Pasta E Fagioli Soup, Slow Cooker Soup