This recipe seems a bit complicated with lots of extra steps. However, it doesn’t have to be that hard. If you want to take a few shortcuts, we have those for you too. First, we include instructions for making the pie filling from scratch. While making this is pretty easy and completely delicious, we do understand that not everyone wants to spend time peeling and chopping apples.

If you want to substitute with canned apple pie filling, it will work just fine. Second, if you don’t want to make the homemade biscuit dough from scratch, you can buy a refrigerated can of biscuit dough and just pop that can right open and use canned biscuits. Frozen biscuits will work too. 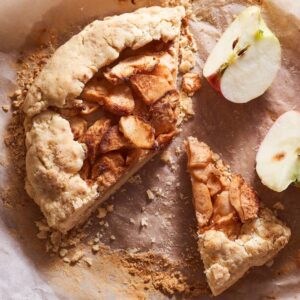 April Freeman
What could be better than a homemade biscuit? How about a homemade biscuit coated in cinnamon sugar and topped with apple pie filling? That is exactly what our recipe for Skillet Apple Pie Biscuit serves up. Health food it is not, but for an occasional treat, this recipe hits the spot.
Print Recipe Pin Recipe Add to Collection Go to Collections
Prep Time 30 mins
Baking Time 35 mins
Total Time 1 hr 5 mins
Cuisine American
Servings 12 Servings

For this recipe, you definitely want to use an apple that will hold up well to baking. This means no Red Delicious apples! Granny Smith, Fuji, Golden Delicious or even a Honey crisp apple will work, keeping their shape even as you cook and bake them.  Is this a dessert or a breakfast? You are the only one who gets to decide that. If you want to make this for breakfast, one could make the case that it is a breakfast, since, after all, biscuits are traditionally a breakfast menu item. But, with all the added sugar and the icing, others may want to serve it as a dessert. It’s entirely up to you.
Keyword Breakfast, Dessert, Recipe, Skillet Apple Pie Biscuits