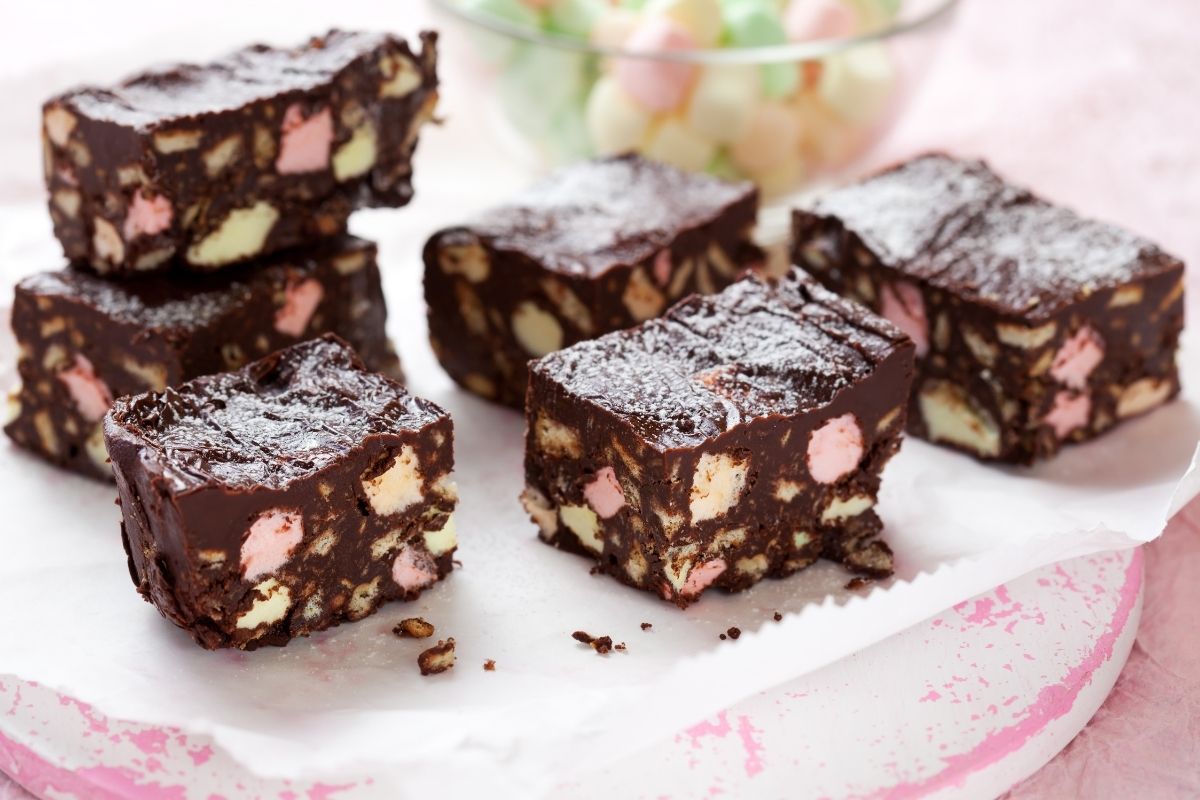 The perfect blend of peanut butter, chocolate, and marshmallow, Rocky Road Bars are excellent to serve at potlucks and for dessert after dinner. You can slice these into squares for perfect portions. They’re also not crumbly, so you don’t have to worry about handing it over to your child for fear they’ll make a crumbly mess. 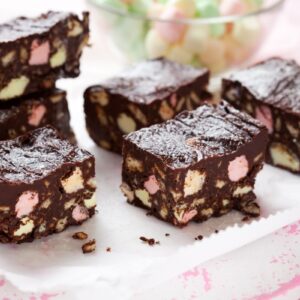 April Freeman
Delicious, crispy, crunchy, and rich, you can’t go wrong with these Rocky Road Bars. Made with just a few ingredients and simple to prepare, the most time you’ll have to allow for this recipe is refrigeration time. You can whip up these bars for a school bake sale because they transport very easily.
Print Recipe Pin Recipe Add to Collection Go to Collections
Prep Time 20 mins
Refrigeration Time 2 hrs
Cuisine American
Servings 16 bars

The flavor of rocky road has graced the United States for years, originally debuting as an ice cream flavor. However, there is much debate about exactly when and by whom it was invented. One story goes that in 1906, William Dreyer came to the United States from Germany. Dreyer went on to move to California and started a business in making ice cream. In 1929, he teamed up with a man named Joseph Edy who was a candy maker. This pair allegedly came up with the delicious rocky road ice cream flavor. The story says that Dreyer used his wife’s sewing scissors to cut up the marshmallows to put them in the ice cream. Eventually, they replaced the walnuts in the chocolate ice cream with almonds and the flavor Rocky Road was born. The name supposedly alluded to the October 1929 stock market crash which had a negative effect on the United States economy Yet another claim says that the flavor was invented by the grandson of the owner of a creamery in Oakland, California. The creamery was called Fenton’s Creamery and Melvin Fenton is attributed as being the creator of the Rocky Road ice cream flavor. But, like all other claims, this has not been confirmed for certain. To make the invention of Rocky Road even more convoluted and complicated, another claim reports that George Farren was the true inventor of this flavor. Rumor states that Farren was friends with Edy and Dreyer. Reportedly, he blended a candy bar into ice cream and created the Rocky Road flavor minus the almonds, using walnuts instead. Edy and Dreyer allegedly stole this idea but replaced the walnuts with the almonds. All of these claims are brought into question as the first recorded recipe of Rocky Road came from Kansas. In a book known as Rigby’s Reliable Candy Teacher, in the 13th edition, a recipe very similar to Rocky Road was recorded. The recipe describes a treat where a dish of chocolate ice cream is topped with a ladle of honey crème whip. Honey crème whip is a confection that is quite similar to marshmallows. The recipe goes on to instruct the chef to add in a few broken almond macaroons as well as pecans and walnuts. To fans of Rocky Road Ice Cream, this flavor combination sounds very familiar. The recipe was copyrighted in 1920 which casts much doubt upon all other previous claims. Unfortunately, like many inventors of age-old and beloved recipes, the one who can be credited with the invention of the beloved flavor continues to be unconfirmed. Regardless, this tasty combination of chocolate, almonds, and marshmallow is still enjoyed to this day. While our recipe for Rocky Road Bars features peanut butter instead of whole almonds or walnuts, it still hearkens back to the familiar flavors of this popular food. You will love it because it is so crunchy, rich, and chocolatey.
Keyword chocolate, rocky road bars