With the coming holidays, houses would start to smell of roasted chestnuts. Here is everything you need to know about this historic holiday treat and how to make them.

Chestnuts Roasted Over an Open Fire

Roasted chestnuts have been enjoyed as a simple, filling snack for centuries, well before the holiday traditions, we all know today was established. People have been eating chestnuts for about as long as people have existed. The trees that produce these nuts grow natively in the Americas and in Asia. They were a well-known nut around the Mediterranean. Native Americans ate chestnuts regularly and Alexander the Great himself planted chestnut trees all over Europe as he built his empire. 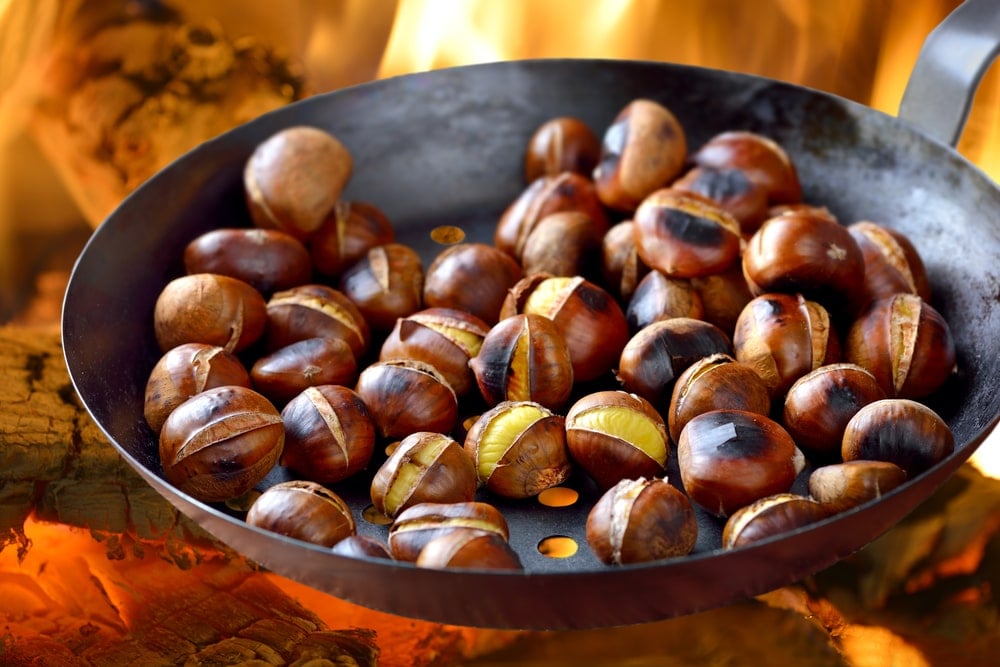 Chestnuts were even used for bartering and trading. The trees grow well in areas where grain isn’t easy to cultivate, which made the nuts a valuable food source. Ancient Greeks ground chestnuts into flour to make bread. Romans also used chestnuts in various recipes.

Roasting the nuts is the most popular way to eat chestnuts. It’s not known when exactly chestnuts were first roasted and eaten, but it’s likely that people have been cooking them this way for hundreds and hundreds of years. Roasting the nuts is far from the only way to eat them, however. You can boil these nuts as well. Chestnuts are used in lots of different recipes, everything from pie to stuffing. Chestnut stuffing is a popular recipe during Thanksgiving.

Once, chestnut trees covered a whopping 200 million acres of land in the U.S. In 1904, a fungus was found on chestnut trees. The chestnut blight tore through the American population of trees. In less than 50 years, the disease destroyed three and half billion out of the four billion trees that once covered the U.S.

The American Chestnut Foundation, established in 1983, is attempting to re-populate the chestnut tree population in the U.S.

Chestnuts aren’t technically nuts. They’re actually a seed. This is why they don’t quite look like other nuts. Good, ripe chestnuts have a shiny brown exterior. The exterior should be flawless, with no blemishes or discoloration. Chestnuts should also be firm on the outside, not soft. Chestnuts must be refrigerated until you use them for cooking or eating.

How to Roast Chestnuts

Before you roast chestnuts, punch one or two holes into the shell of each nut. You can also mark a little “x” on the flat part of the shell. The shell must be punctured so that steam from inside can release naturally.

If the shell isn’t punctured, the nut will explode. This will create a mess and a loud noise. You can do this with a sharp paring knife but handle each nut carefully and wear puncture-resistant gloves. Always wear the proper equipment when you’re handling a sharp knife of any other potentially dangerous kitchen tool. 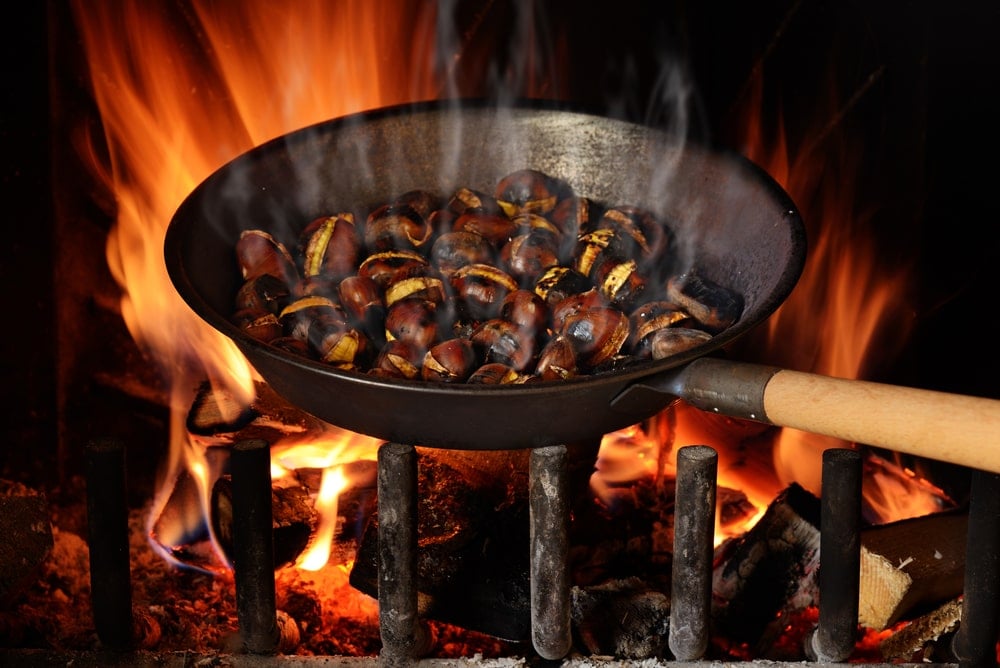 Roasting chestnuts over an open fire sounds great in the song but it’s not so safe. Chestnuts can safely be roasted in the oven instead. Place them on a baking sheet, spread evenly after the shells have been punctured. Bake them on medium heat, at about 300 degrees, for about 15 minutes. The chestnuts will turn slightly browner but should not turn black. If they turn black, they’re overcooked.

The chestnuts are fully roasted and ready to eat when they can be peeled easily and the inner skin surrounding the nut comes off easily. You can roast chestnuts in the microwave oven, too. Cut the nuts in half and place them with the cut edge down on a paper towel.

Cook about eight chestnuts for about two minutes. You may need to play around with the timing and make some adjustments, depending on the wattage of your microwave.

Roasting chestnuts over an open fire (or in a baking pan) is a famous way to eat these nuts, but they can also be steamed or boiled. Chestnuts are harvested from September through February, which is why they’re eaten around the holiday season.

Chestnuts are a good source of fiber, vitamins, and minerals. These nuts are also a good source of potassium. They’re low in fat and work well in both sweet and savory recipes. Chesnuts are a favorite dressing ingredient that makes an appearance on many Thanksgiving tables. It can be used for soup, sweets, even beverages. They have a lot of starch, which makes them a filling treat.

According to legend, a Grecian army survived by eating chestnuts while they retreated from Asia Minor between 401 and 399 B.C.E. In Japan, chestnut trees were being cultivated and intentionally grown even before rice crops were planted.

Chestnuts are more perishable than other nuts, which means they go bad much more quickly. This is why you want to store them in the refrigerator right up until you’re going to eat them or cook with them.

They have fewer calories than other nuts because they’re not really nuts. Two ounces of chestnuts if just 86 calories, far less than the same serving size of any other nut. You should only buy and eat fresh chestnuts. You can freeze chestnuts to preserve their freshness longer.

You should also only eat the nuts cooked. Raw chestnuts are very difficult to work with because of that hard outer burr. It’s more difficult to peel chestnuts when they’re raw. The thin layer that surrounds the meat of the nut is incredibly bitter to the taste. You can only eat peeled chestnuts because the skin is inedible, but it’s incredibly difficult to remove unless the nuts are cooked. 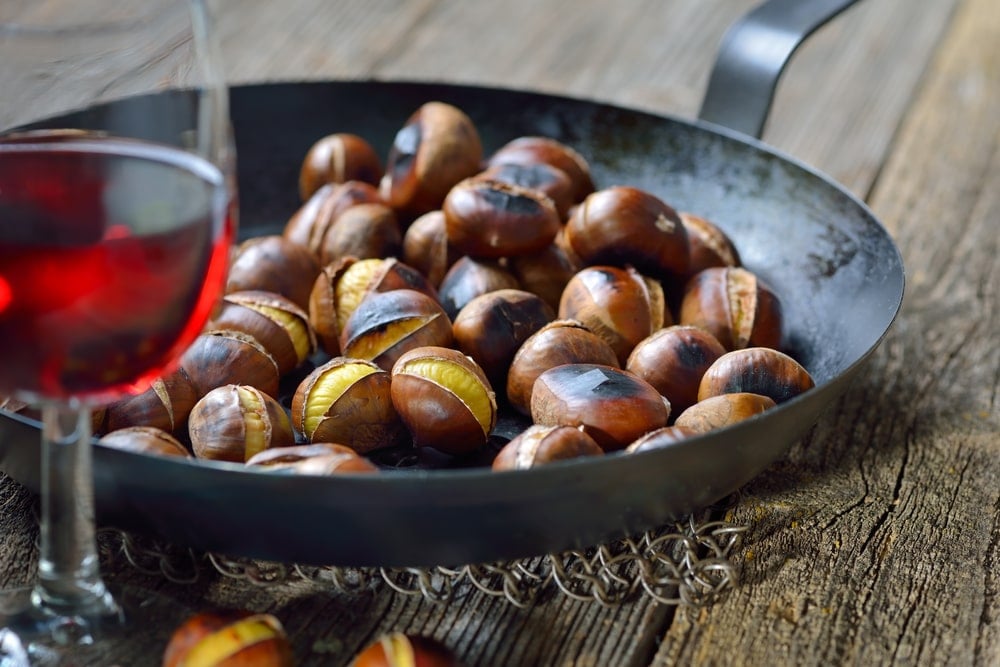 Chestnuts are not like other nuts, so their meat is not firm. The meat of the chestnut is somewhat soft and chewy. Hot roasted chestnuts have a very nutty flavor with a hint of sweetness. They also have a somewhat buttery flavor.

Roasting chestnuts is a great way to enjoy this low calorie, flavorful treat. Roasted chestnuts have become known as a wintertime and holiday time treat. They’re easy to make and they’re delicious to eat. A roasted chestnut is a great little snack. After all, it is was good enough for the Greek army it can’t be all that bad, right?