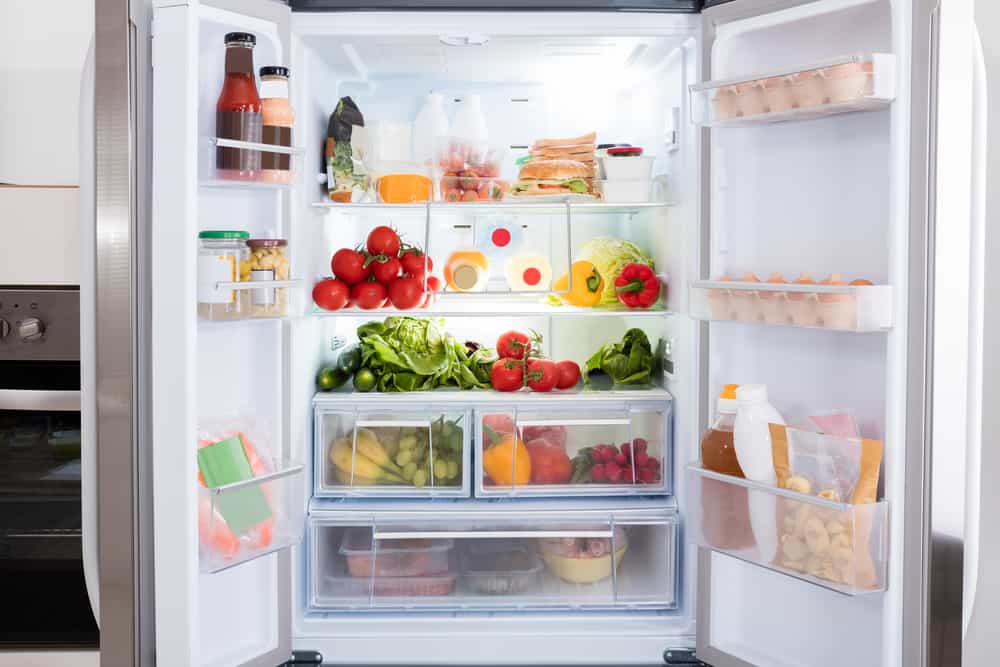 The refrigerator is so much a part of the American households that 15 percent of these homes own at least two. The U.S. sells over eight million refrigerators a year of which an estimated 70 percent are a top mount. An estimated one-quarter are side-by-side refrigerators while the least sold (less than five percent) are bottom mount refrigerators.

Related: 40 different types of appliances for your home | How to Choose Right Fridge for Home | Picks for Beer Keg Refrigerators 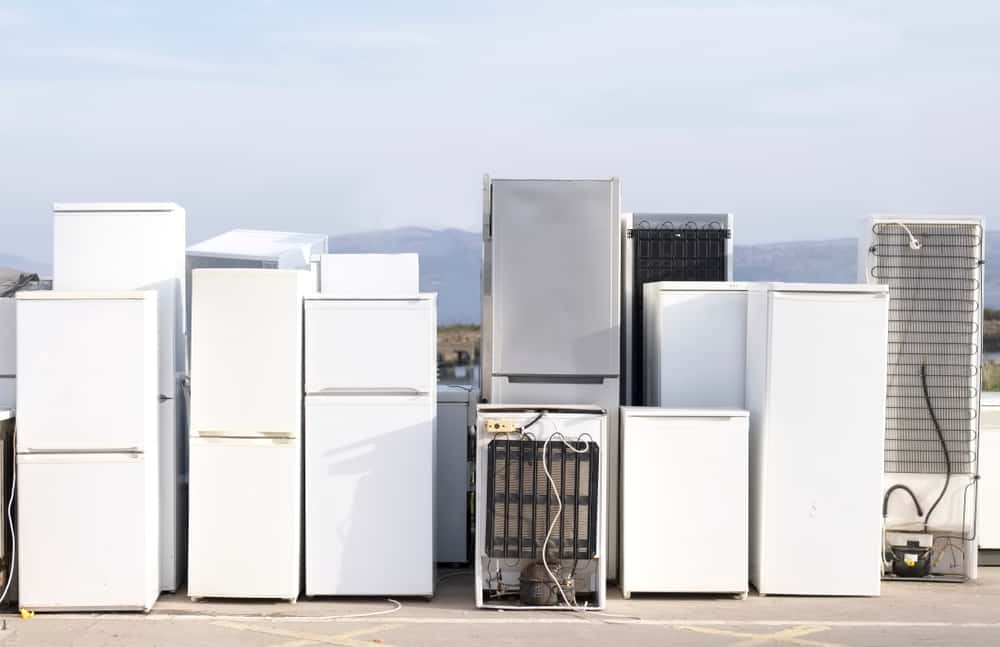 The history of the refrigerator dates back to the ancient times. People used ice to preserve food. Rivers and lakes were the main sources of the ice harvesting; thereafter, refrigerators were invented. Refrigerators have a heat pump and an insulated compartment that transfers heat from inside to the outside of the refrigerators, hence, making the fridge colder.

In the year 1775, a Scottish Professor, William Cullen, designed a small refrigeration machine, which had a container of diethyl ether and a pump. The way the refrigeration machine functioned was simple: the pump-made vacuum lowered the boiling point of the ether. The boiling ether operated as the heat absorbed from the surrounding air.

In 1805, Oliver Evans, an American inventor, designed a closed vapor-compression refrigeration cycle; building on the concept of William Cullen. The vacuum lowered the boiling point of ether. However, these ideas were not practical, but later the system worked thanks to Jacob Perkins who built again a functional vapor-compression refrigeration system in the year 1834.

Perkins’s system had a closed cycle and could operate without waste emission. The setback was that the system was not embraced as much, hence, making it unsuccessful commercially. The invention and improvement of refrigerators never stopped. John Gorrie, an American physician, tried to build a working prototype for cooling air in tropical homes in 1842, but his design also failed to have an impact.

Later, the refrigerators built by James Harrison, a British immigrant in Australia, had an impact as it was used in breweries and meatpacking houses. This mechanically ice-making machine was first built in 1851 and used alcohol, ammonia, and ether as a refrigerant. In later models, ammonia dissolved in methyl chloride, sulfur dioxide, and water refrigerants were used instead.

During the 20th century, refrigerators for domestic use were improvised. In 1913, Fred W. Wolf, who is a native of Fort Wayne, Indiana, invented home refrigerators mounted on icebox. Many inventors improved his ideas, including Nathanial Wales of Michigan who introduced a refrigeration unit, which worked on electric power.

Alfred Mellowes design had a compressor positioned at the cabinet’s bottom. Frigidaire Company later bought his idea in 1918 and proceeded to manufacture refrigerators. In addition, Kelvinator Company began mass-production of refrigerators based on Nathaniel’s concept in the same year. By the year 1923, Kelvinator dominated the market for electric refrigerators.

In summary, it was until 1927 when General Electric introduced refrigerators that were popular and widely used. They used methyl formate or sulfur dioxide as the refrigerator medium; the uses of these two were dangerous, so an alternative solution was sought. Although not risk-free, Freon was found to be much safer.

Evolution of Refrigerators Throughout the 20th Century 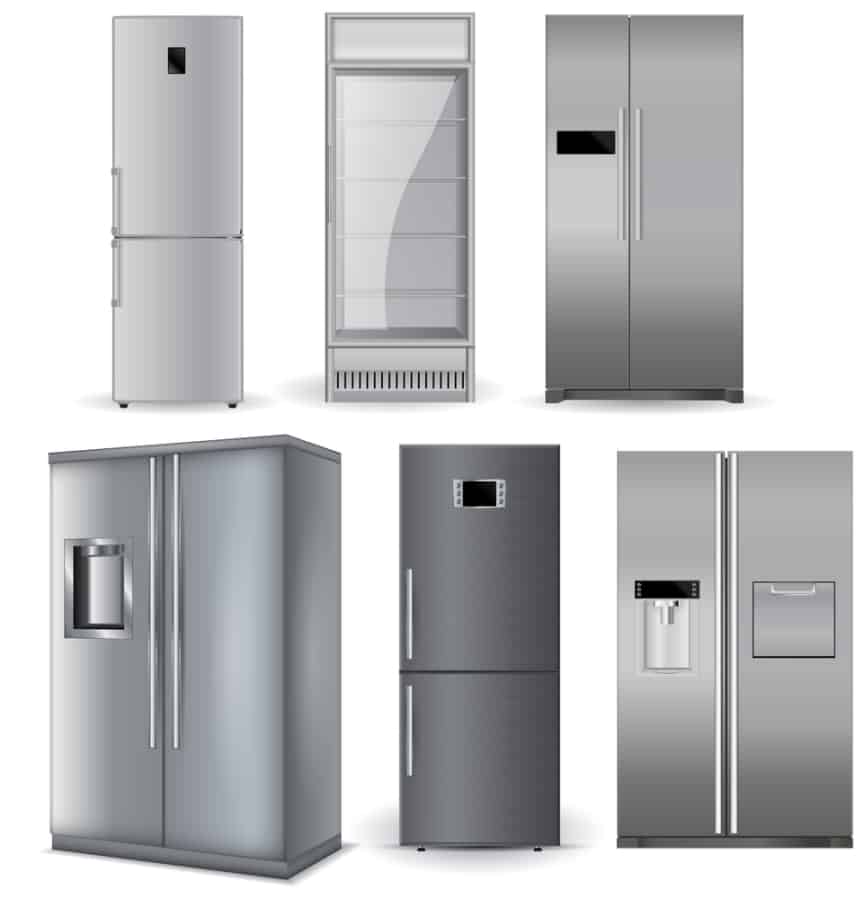 The General Electric invented the first electric refrigerator in the year 1927. It used to cost about $520 by then. These refrigerators were the inspiration behind the classic line of appliances today.

During the 1930’s, refrigerators users were introduced to freezers concept when ice cube became common in electric refrigerators. Furthermore, refrigerator manufacturers replaced the sulfur dioxide as a refrigerant with Freon 12.

In the 1940’s, consumers utilized chilly compartments as frozen food storage. It was during this period that there was also a mass production of fridges.

However, there was a breakthrough in the development of fancy refrigerators in the 1950’s. During this time, refrigerators were a prideful addition to households. The most popular décor and home design trend were matching colorful refrigerators to the cupboards and kitchen walls. There were also significant adjustments in refrigeration technology as game-changing innovations such as automatic defrost and icemakers were invented. This decade represented the height of fridge designs.

Refrigerators in 1970 take a turn to the boxy look of refrigerators during the 1940’s. The compact and miniature fridges were popular in the market. Various governments throughout the world developed standards that were intended to guide manufacturers in the production of efficient and eco-friendly products as the priorities shifted to the conservation of the environment. Energy-efficient refrigerators had to be manufactured to meet these regulations and standards as recommended. In 1975, a fridge consumed the energy of approximately 2200kWh per year.

Refrigerators designed in the 1980’s were mostly built to last long. Households of the 1980’s took on a pragmatic design as compared to past decades. Chlorofluorocarbons were removed from the refrigerator-sealed systems, and this made refrigerators in the 1980’s safer and workable in the eyes of consumers and manufacturers. The amount of energy consumed by a refrigerator in mid-1980’s was approximately 1700 kWh per year.

The fridge designs of the 1990’s were sleek and modern. There was the introduction of French style doors as well as stainless steel to the refrigerator fronts. Consumers favored contemporary and fashionable designs, and as a result, bulky fridge-freezers of the past disappeared from the markets. Each decade during the 20th century improved the energy efficiency as climate change gained notoriety in the public eye. Energy consumption fell to just 850kWh per year.

The refrigerator market in the present day provides households with varieties of selections of present-day appliances. Refrigerators of today maintain some aesthetics, which characterized some of the mid-century designs, but the difference is that it is coupled with the pros of advanced energy efficiency.

As of today, typical refrigerators are very energy efficient. They can use just a third of the energy that model of akin size would have consumed in the 1970’s. Energy efficiency on a contemporary refrigerator can go below 460kWh per year, which is a reduced amount. It is a win-win for consumers and the environment. 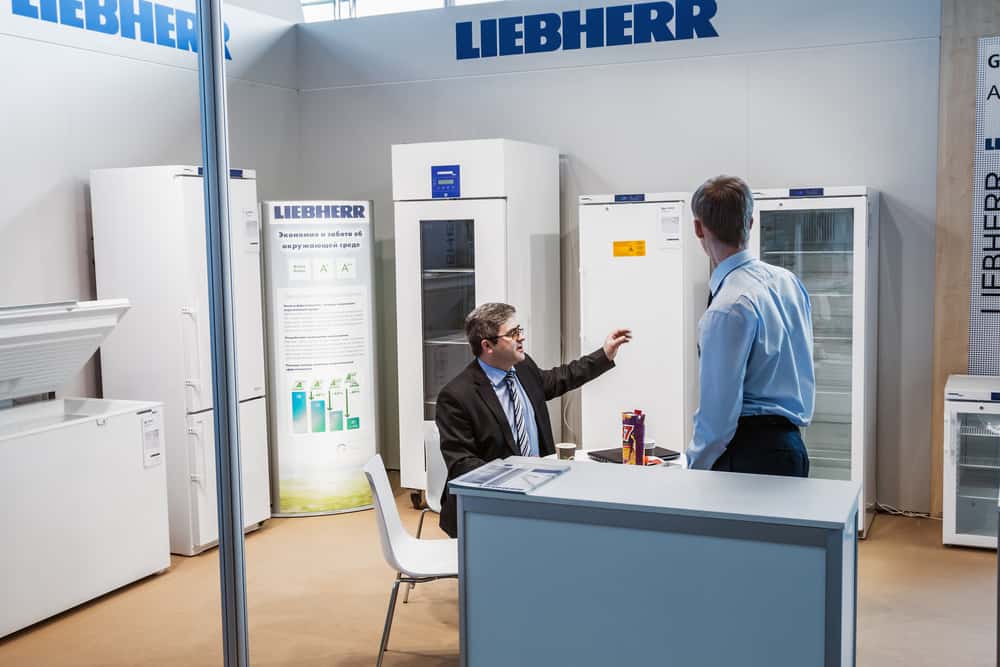 Liebherr continued innovation and new technology contributed to the development of improvised refrigerators in the 1980s. Its NoFrost technology, which was launched in the year 1987, is one example of its technologies. NoFrost prevents frosting inside the freezer compartment, and due to its introduction, defrosting became outdated.

Varieties of foods have dissimilar temperatures and humidity needs, and these requirements should be met in order to retain the food’s flavor, texture, appearance, and vitamin content. BioFresh technology offers the right conditions to lengthen storage period.

Over the years and present day, Liebherr has developed a firm reputation as an industry leader in the design field and energy efficiency appliances. They employ highly efficient compressors, environmentally friendly refrigerants, and new insulation materials. They also offer a variety of energy efficient home appliances. 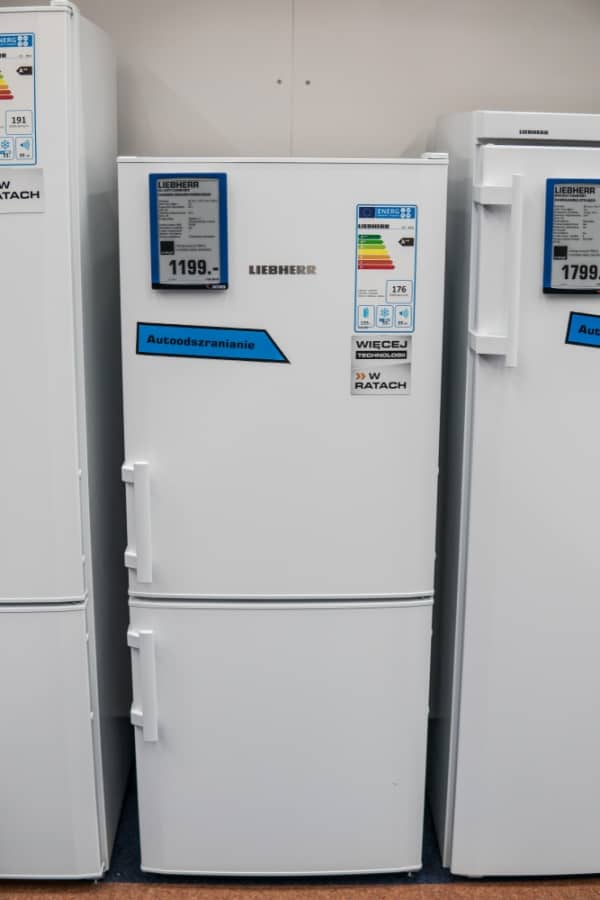 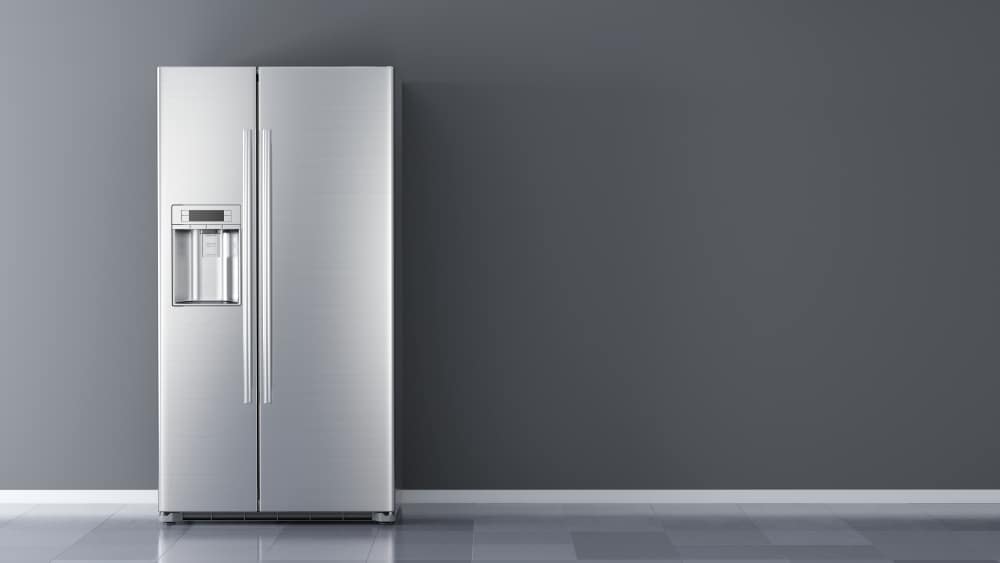 This fridge is designed with both the freezer and refrigerator close to each other. These refrigerators are always larger than the bottom and top freezers models. It’s suitable for large families.

• Pros: The in-door icemaker is attractive, and its narrow doors need less swing space, hence good for the small kitchen. Its freezer capacity is also larger as compared to other models.

• Cons: May not hold wide items, and it’s less energy-efficient. 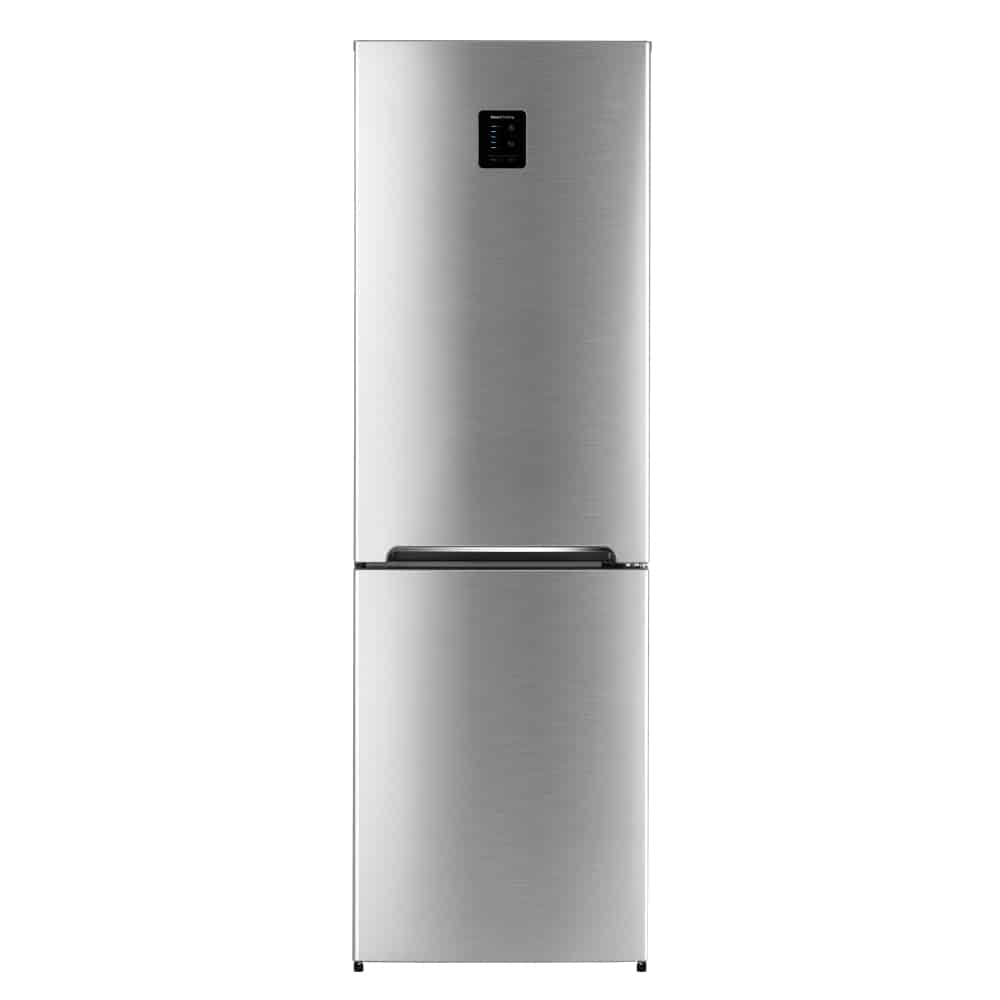 • Pros: It has more capacity as compared to top-mount freezers.

• Cons: You needs to bend in order to remove frozen dinner and ice-cream. 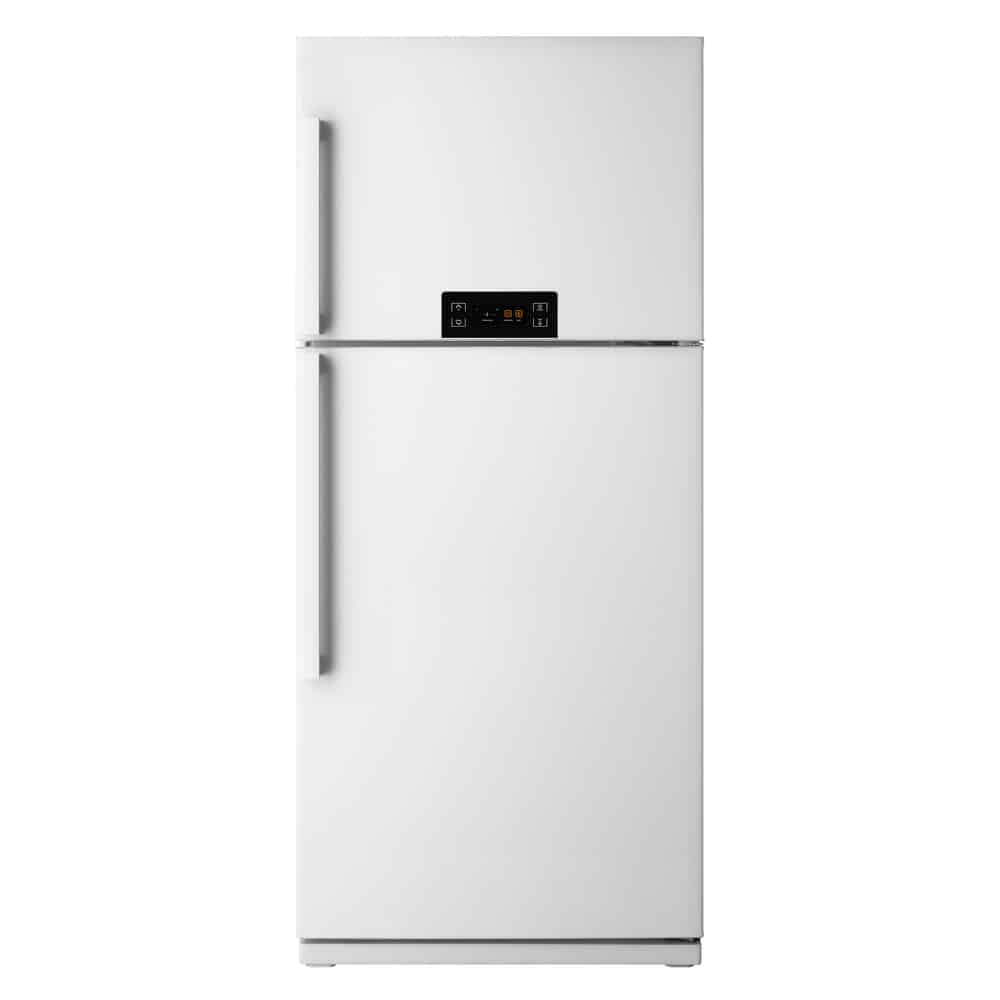 Its freezer is at the top.

• Cons: You need to stoop when loading and unloading. It could be a pain to clean, open or shut. 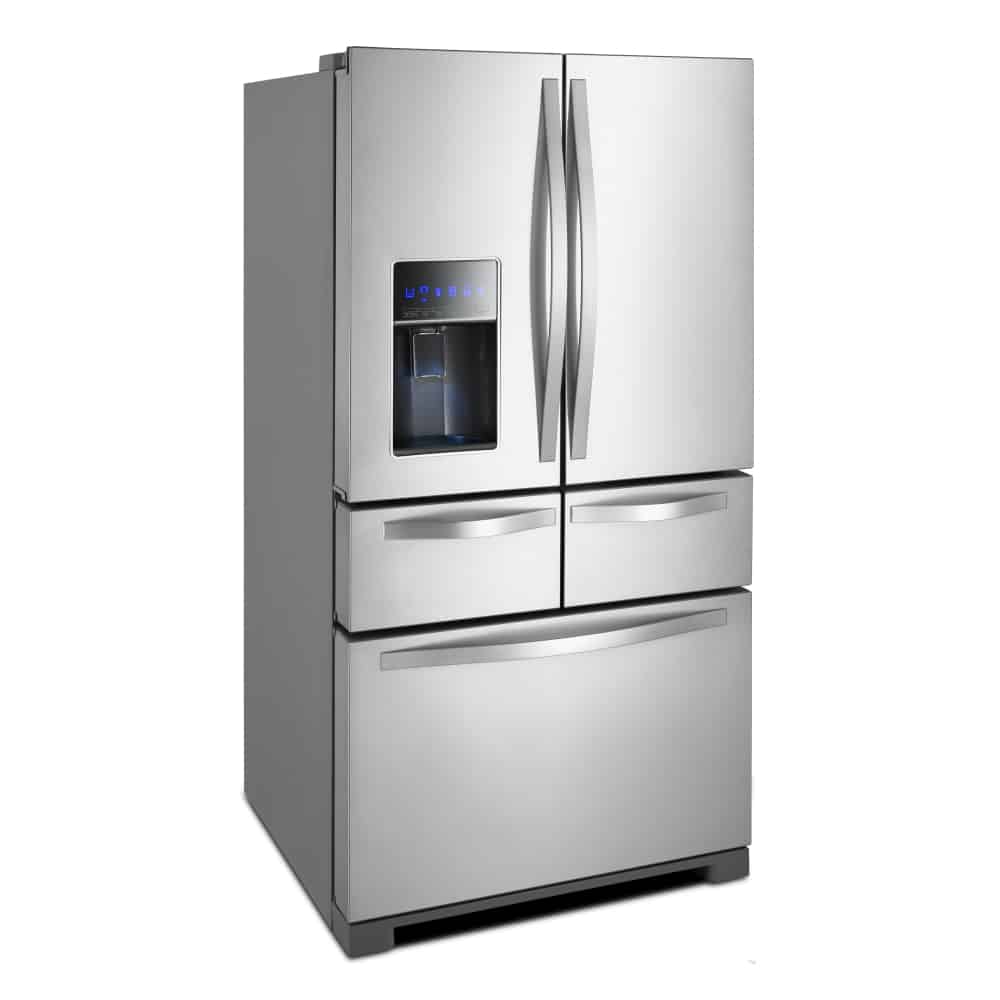 • Cons: You can barely see the entire fridge not unless you use both of your hands to open the doors. 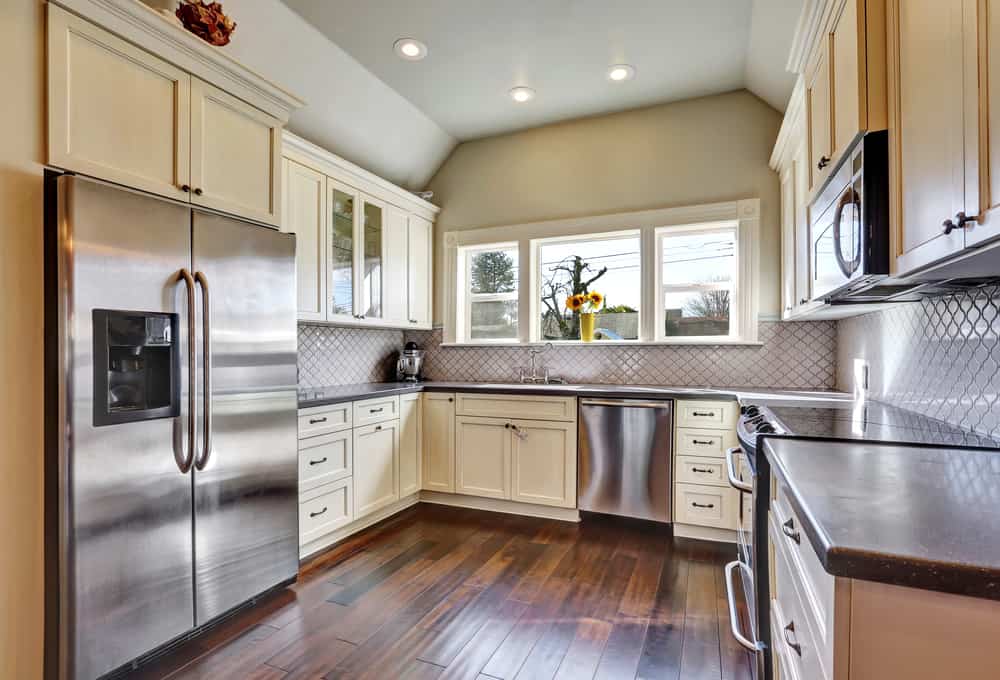 These refrigerators have many designs. They have flush cabinets that give them a built-in look. Sub-zero is an example of the built-in refrigerator. They offer a clean airflow, hence fresher and long lasting food.

• Pros: You can customize their sleek beauty with a front panel matching cabinetry.

• Cons: They are expensive. It also requires huge space due to its size.

See also  The History of the Dishwasher

The key components of the refrigeration system are:

1) Refrigerant: A liquid or gas that cools the refrigerator and flows through the system

2) Two sets of pipes: The two pipes hold the refrigerant and exchange the heat. One of the pipes take in cold, and the other is outside. The outside pipe releases heat into the air.

3) Compressor: It raises the pressure of the gas within the refrigerator system and liquefies it.

4) Expansion valves: Releases the gas pressure and vaporizes the gas, which takes the heat from inside the refrigerator.

Many interesting things could be said about refrigeration and refrigerators. Here are some of them:

• General Electric produced the first commercial household refrigerator back in 1911. Its first successful line was Kelvinator. This model held close to 80% of the market BY 1923.

• The refrigerator uses approximately 10% of total electricity in a household.

• The efficiency of refrigerators is high if it has more items in it.

• The United States Clean out your refrigerator day is on 15th November.

• Nearly 8 million refrigerators are purchased every year in the US.

• The 27-kilometer cryogenic distribution line located on the border of France and Switzerland is the World’s largest refrigerator. It is part of the big Hardon Collider.

• The Scottish Professor, William Cullen was the first person to design a small refrigerator machine in the year 1955.

• At the beginning of the 1950s, refrigerators were mostly white in color. However, in the mid-1950s, designers began to create colorful refrigerators.

• In the year 1855, John Gorrie invented the first vapor-compression refrigerator.

• Kilowatt (kW) is the basic unit of refrigeration systems for both commercial and industrial.