Despite its French sounding name, Quiche Lorraine is actually of Germanic origins, since it hails from the area of Lorraine, a place with German roots. Quiche Lorraine sounds like it should be complicated to make but, surprisingly, it is pretty simple. Try it today with our easy to follow recipe.

Although most people would think that quiche is of French origins, they would actually be wrong. Surprisingly, quiche is of German origins. This dish originally came from the area of Lorraine, which has been under Germanic rule at various times in its history. The oldest recipes for quiche were a simple savory pie that featured eggs, milk or cream, and rich, fatty meats like ham or bacon.

Quiche Lorraine was typically a regional dish until after World War 2. Troops from all over the world flooded into France to liberate the French people from the Nazi Germans, and while they were there those foreign troops came to gain an appreciation for many of the French dishes they sampled while they were there. One such dish was Quiche Lorraine. The layers of cheese and meat surrounded by a smooth, eggy custard caused the soldiers to take the recipe back to their native homes after the war. 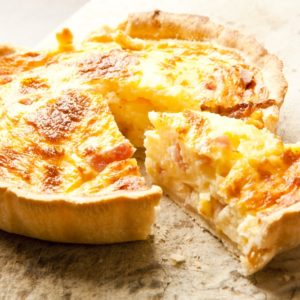 Along with World War 2, Julia Child was also responsible for the spread of Quiche Lorraine in the United States. Julia lived in France and wrote the book, Mastering the Art of French Cooking. Later in her life, she had one of the most popular cooking television shows broadcast in the United States during the 1960s. Her recipe for Quiche Lorraine introduced this recipe to the United States general public. Our recipe for Quiche Lorraine hails back to the simple dish that originated in the French countryside. While quiche sounds fancy and upscale, in reality, the recipe is quick, easy, and uncomplicated to make. Our recipe includes instructions and ingredients for making a pastry crust from scratch. However, if you do not feel like making a pie crust or you do not have much time in your schedule, you can use a premade crust from the dairy case in your local grocery store. Chances are, nobody will even be able to taste the difference. After you line the pan with a crust, the rest of the recipe is simple to make. All you have to do is scatter some ingredients in the crust, mix together the filling components, and pour it into the pan, baking it for forty-five minutes or so.
Keyword Brunch, Quiche Lorraine, Recipe