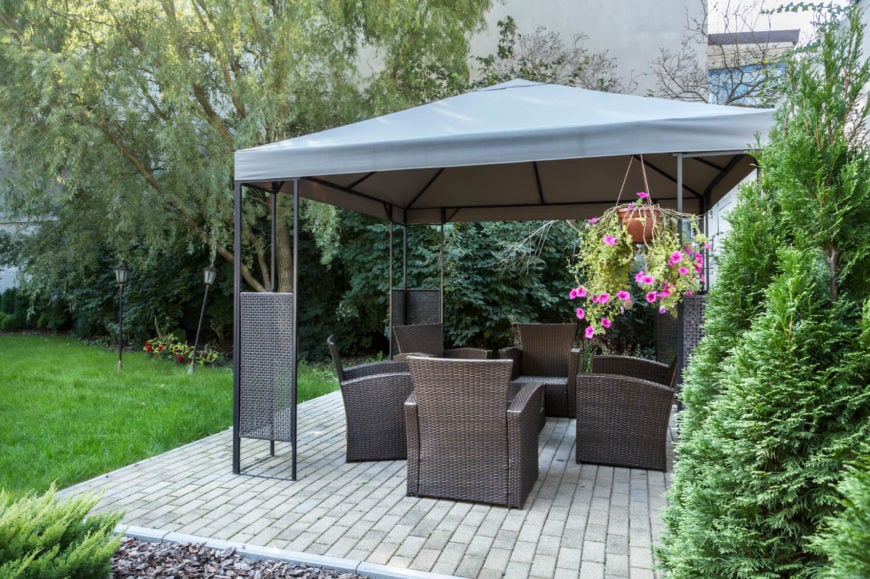 While a lot of the gazebos featured on home design sites are permanent structures like wood, it’s important to remember that there are other options, including portable models!

Portable gazebos are typically made out of canvas and aluminum, and may be built like tents, which makes them a great option for camping or vacationing. Let’s check out some of the pros and cons of buying a portable gazebo for your backyard.

This gallery will feature a wide variety of portable gazebos. Some are more portable than others; ranging from pop-up tents to canvas-roofed structures where only the frame is permanent.

We hope you’ll be inspired by these options!

This gazebo is sizable and has a sturdy aluminum base. The screens can be pulled back to allow the breeze in during the day, and closed to prevent mosquitoes and other insects from invading the gazebo in the evening hours. 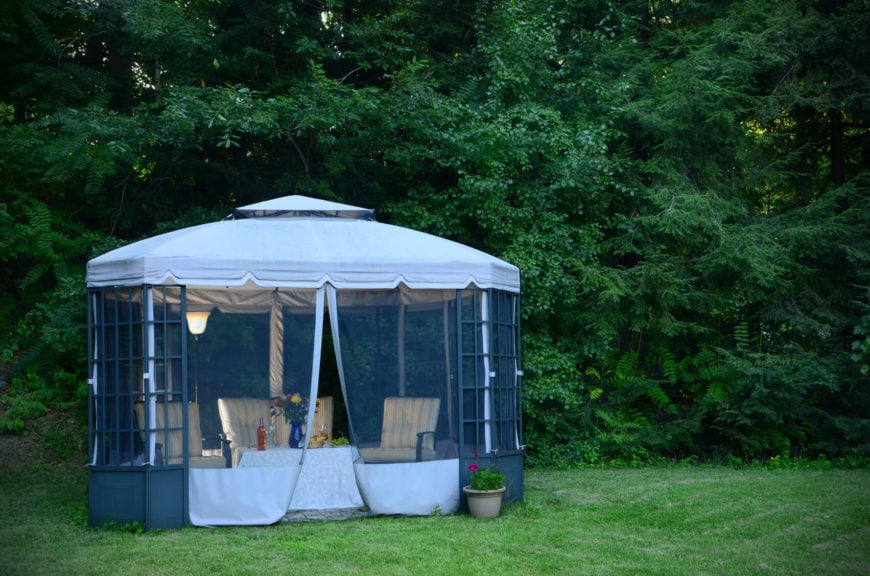 The slightly sloping canvas roof of this gazebo is just the right size for this somewhat narrow gravel patio. A dining table that sits six fits nicely under it with plenty of room between the edge and the chairs. 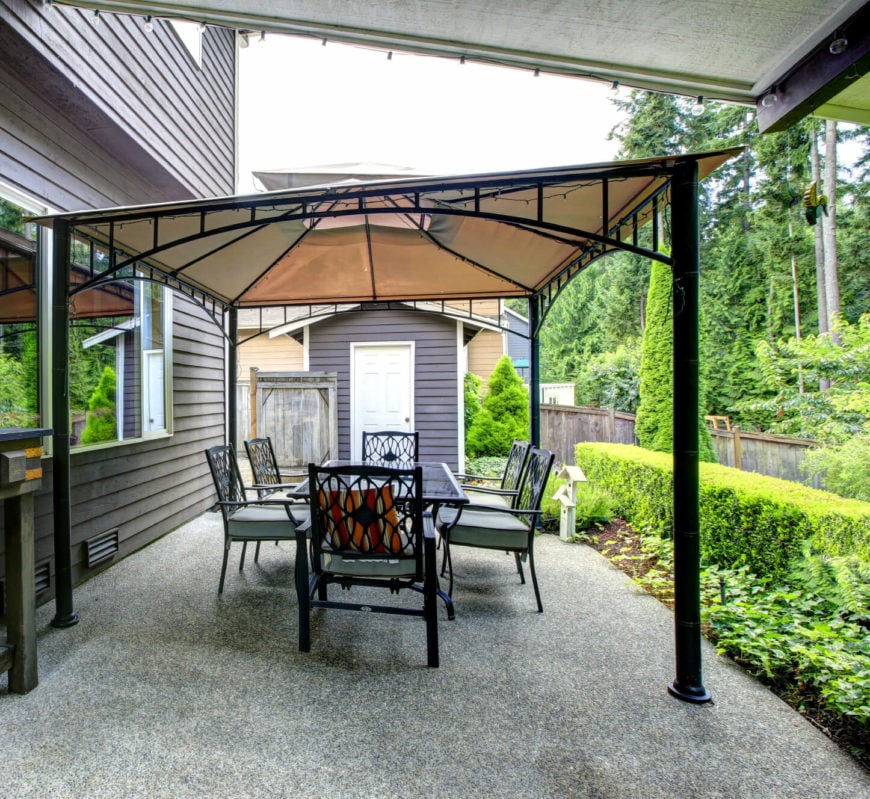 This gazebo is large enough to accommodate five wicker armchairs, shielding any visitors from sun or rain. The mesh panels on each support are a great decorative detail.

This canvas gazebo has two layers of screens and curtains for privacy and keeping insects out. The gazebo is easily portable and works great in your backyard or should you take it camping. 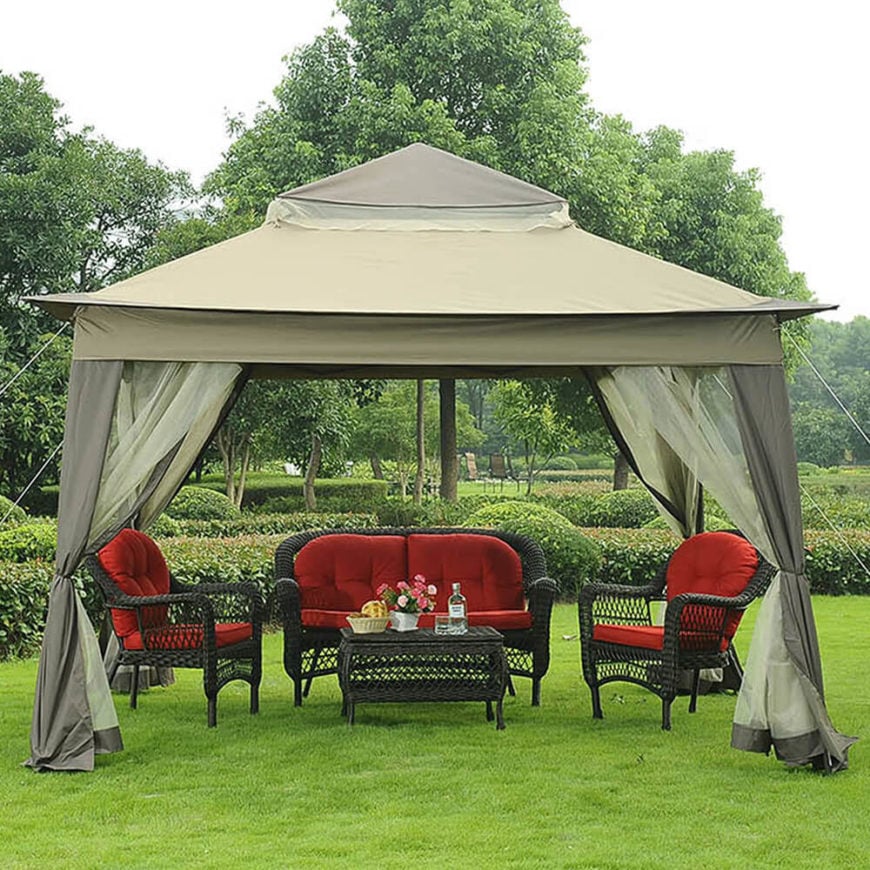 The delicate aluminum frame of this gazebo is covered by sheer curtains and a two-tiered canvas roof. It sits comfortably on a stone patio in the midst of this backyard, a great retreat from the heat of the summer day. 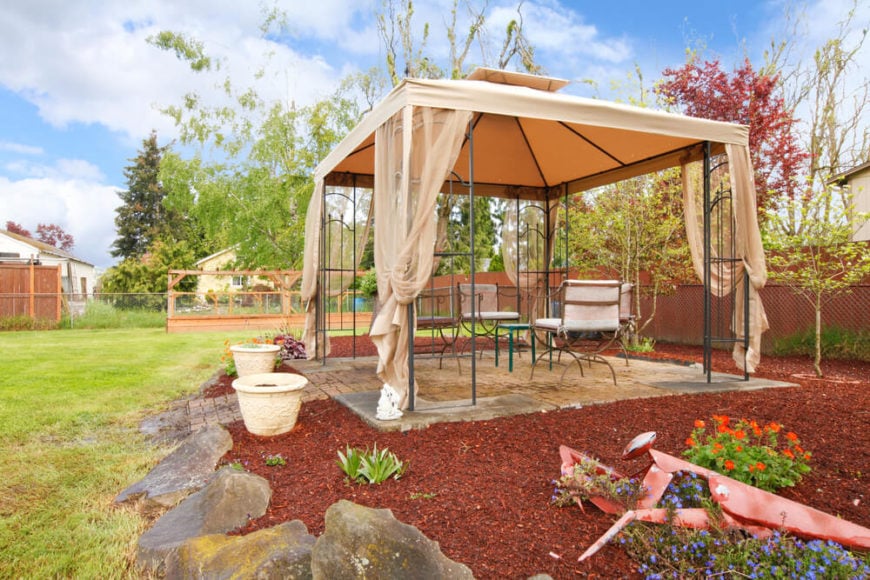 This backyard may have a lot of trees and shade, but a gazebo ensures that as the sun moves through the sky, the shade stays put. It’s perfect at the edge of a pool. 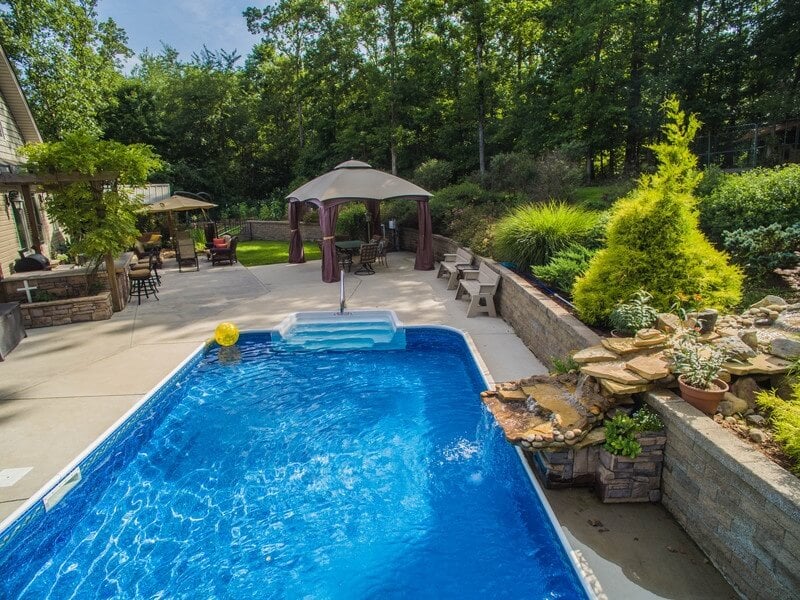 This pop-up tent style portable gazebo is the perfect addition to your backyard on days when the bugs are numerous. It’s also easy to collapse and put in the back of a truck or car to take camping! 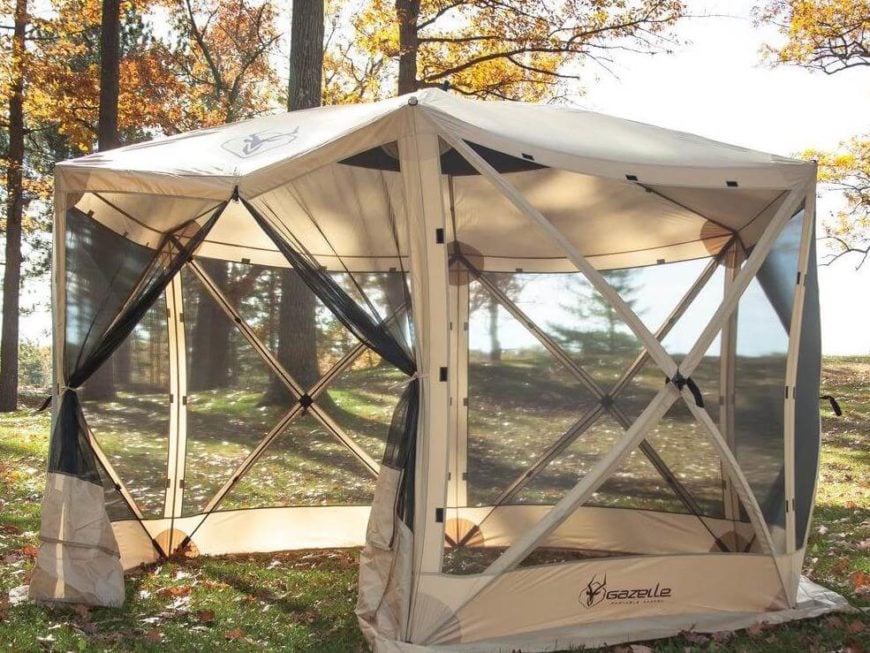 This is a smaller gazebo, but it has a hard roof and delicate aluminum features that enclose it. It’s perfect for a small garden patio, and will sit two to three people comfortably. 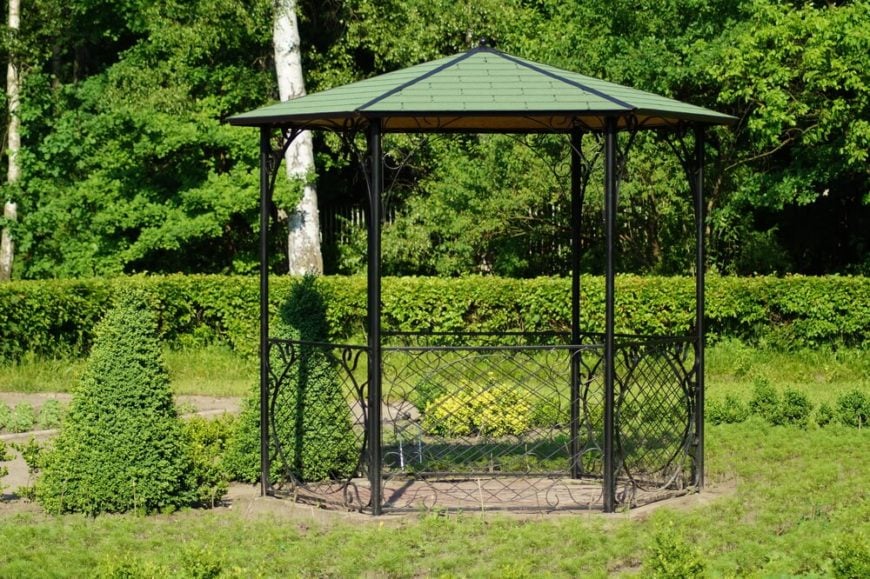 This square, flat-roofed gazebo is easy to set up in the garden and has space to wire a light, as shown. It sits above an outdoor sectional in green that seems to disappear into the greenery of this modern, organic-feeling backyard. 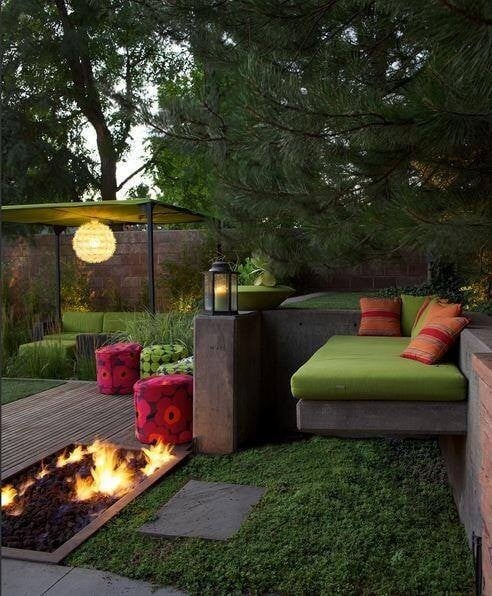 This spacious gazebo sits above a chaise lounge and outdoor bar combo by the pool. It’s a great way to relax, and is easy to set up and take down when the season is over. 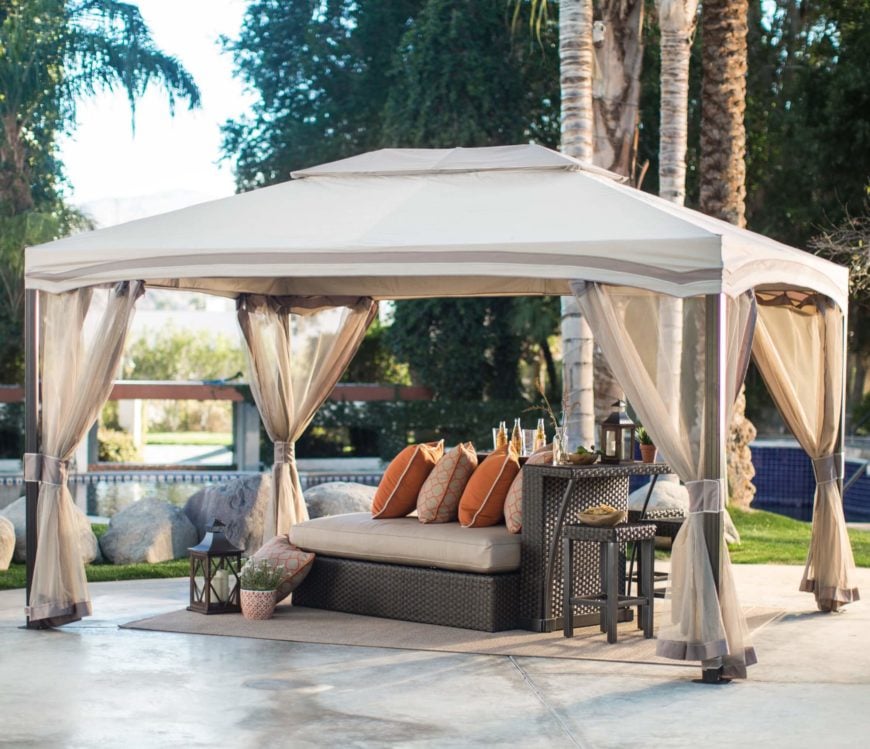 This is another great example of a poolside gazebo. Tiebacks keep the curtains away when you’d rather enjoy the breeze, and let the sides loose if privacy is what you’d prefer. 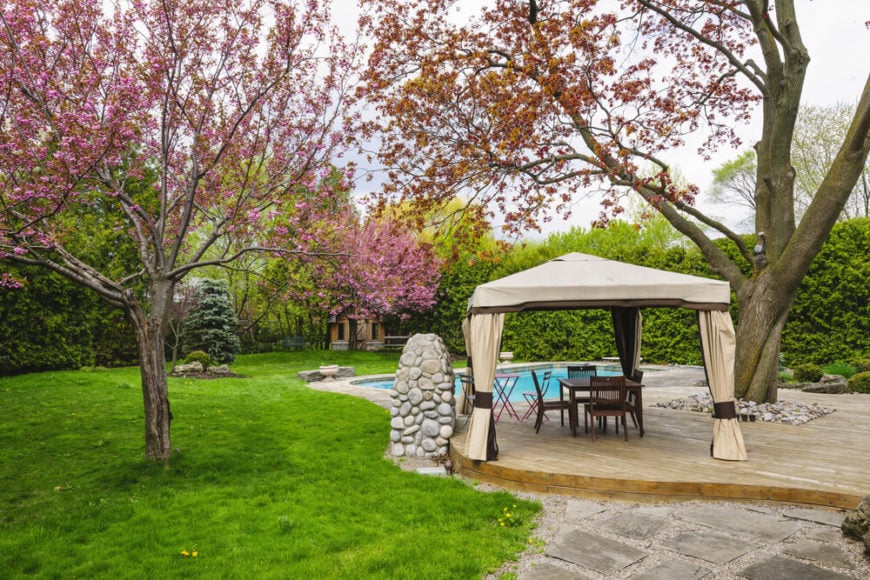 The slight curvature of this portable gazebo gives it a bit more style than you’d expect from a mostly canvas structure. Again, we see the double-layered curtains that can form the enclosed sides of the structure, if needed. 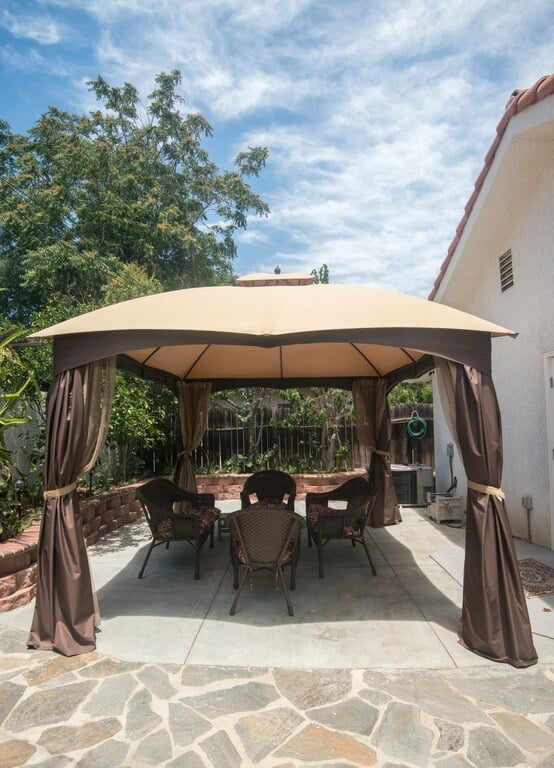 This is a great example of a pop-up gazebo. The vaulted canvas roof gives the structure more of an imposing presence, while also allowing air to circulate above, keeping the gazebo from feeling hot and stuffy when the screened panels are closed. 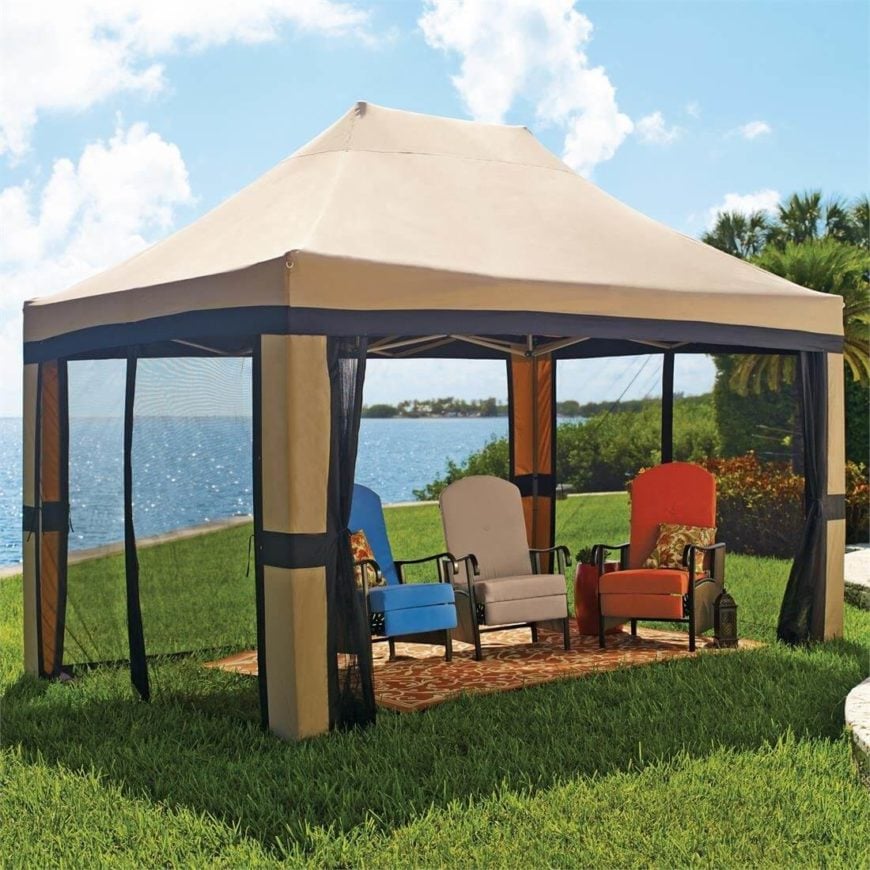 These are unique, simple lean-tos that make a great beach gazebo. Bamboo poles form the base of the structure, and sheer panels shield the occupants from any blowing sand. 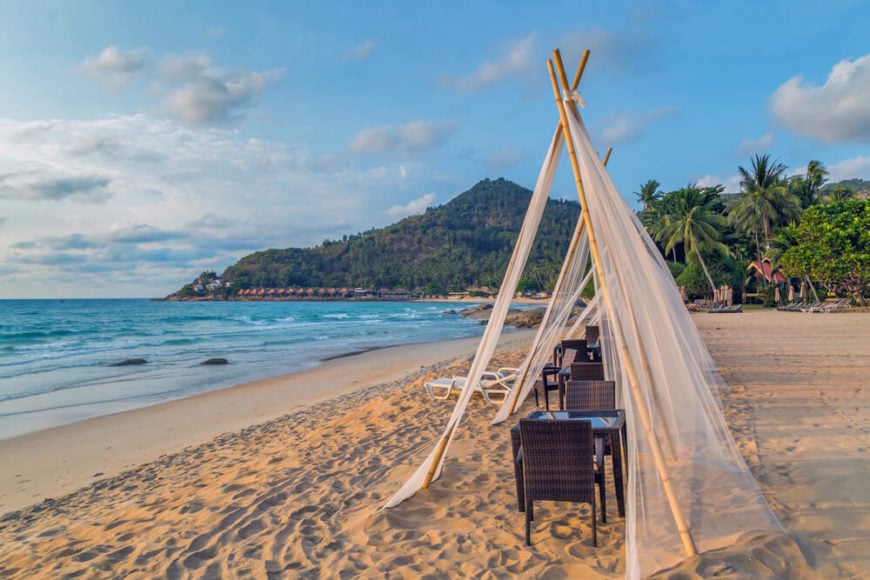 The aluminum swirls at the top of this portable gazebo add style to an otherwise nondescript structure. The owners of this gazebo office area have strung lights around the top of the gazebo. 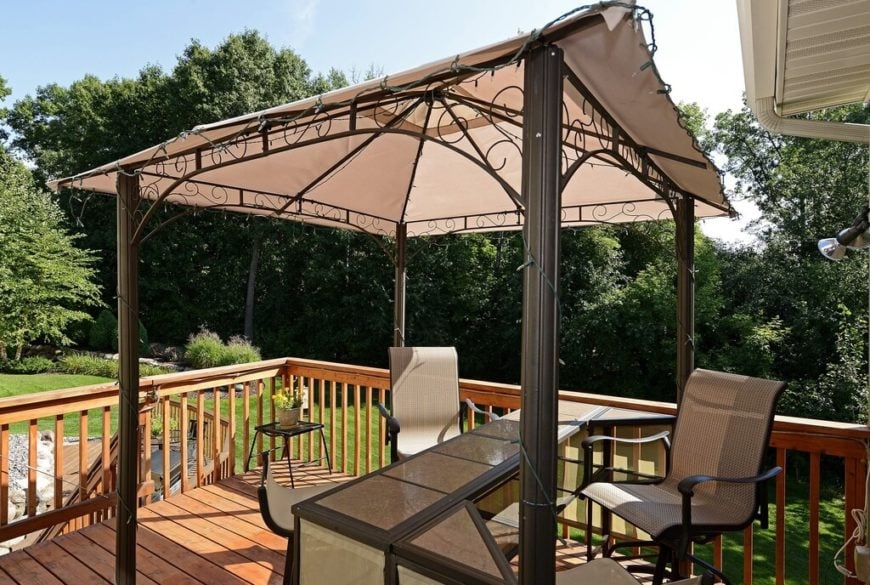 This simple pop-up gazebo has a two-tiered roof that lends it a lot more style than a simple flat roof. Like most canvas gazebos, it has the dual sides, screens and curtains. 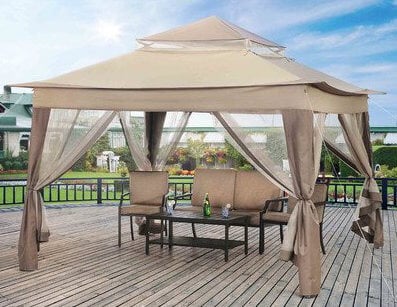 This is an unusual gazebo, a strictly metal structure used like an arbor. It’s the perfect addition to the middle of a garden. Since it’s on a stone patio here, the owners added potted vines to dress up the simple, bare bones of the gazebo. 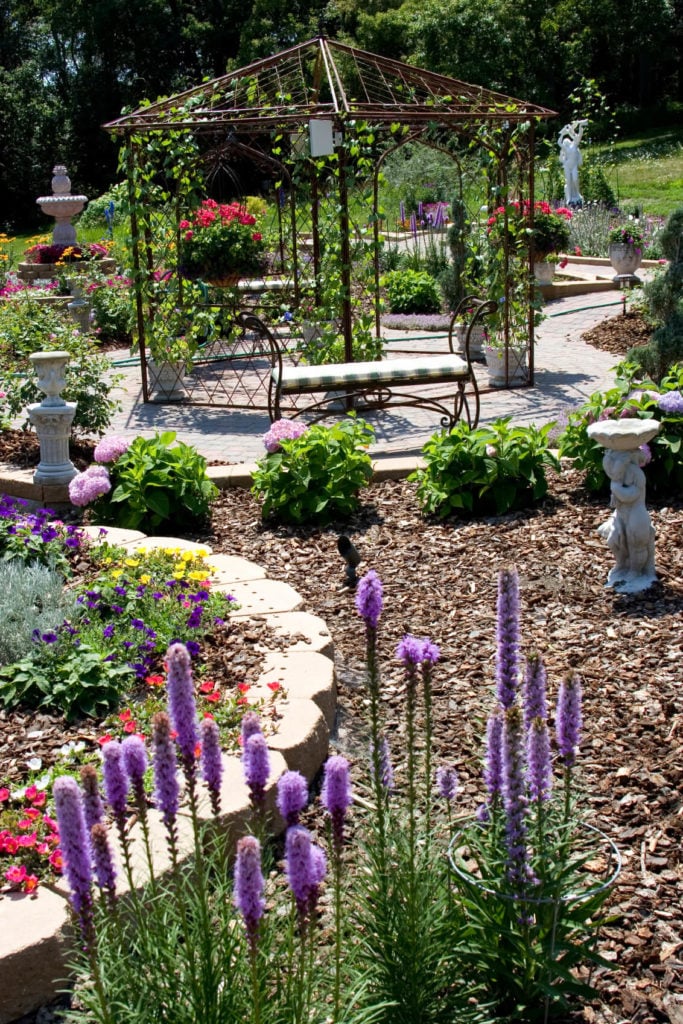 The designs on the supports of this gazebo add elegance to an otherwise simple gazebo structure. The scalloped edges of the canvas roof are a great touch. 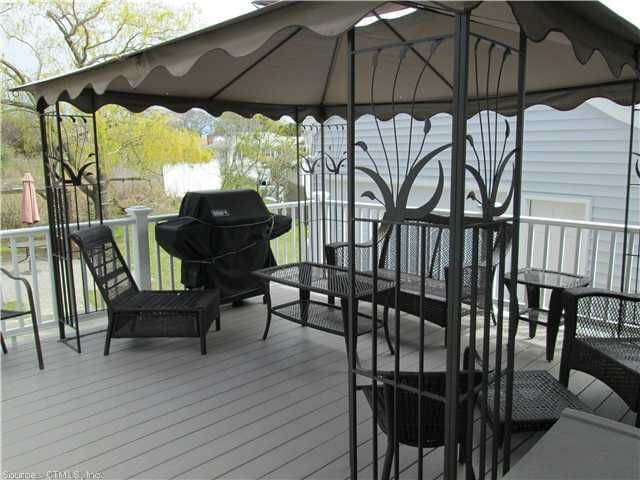 This gazebo only has a single layer of curtains. The screens will help keep out bugs in the evening hours, meaning the party never has to end. This is a spacious model with places to hang flower baskets on the interior. 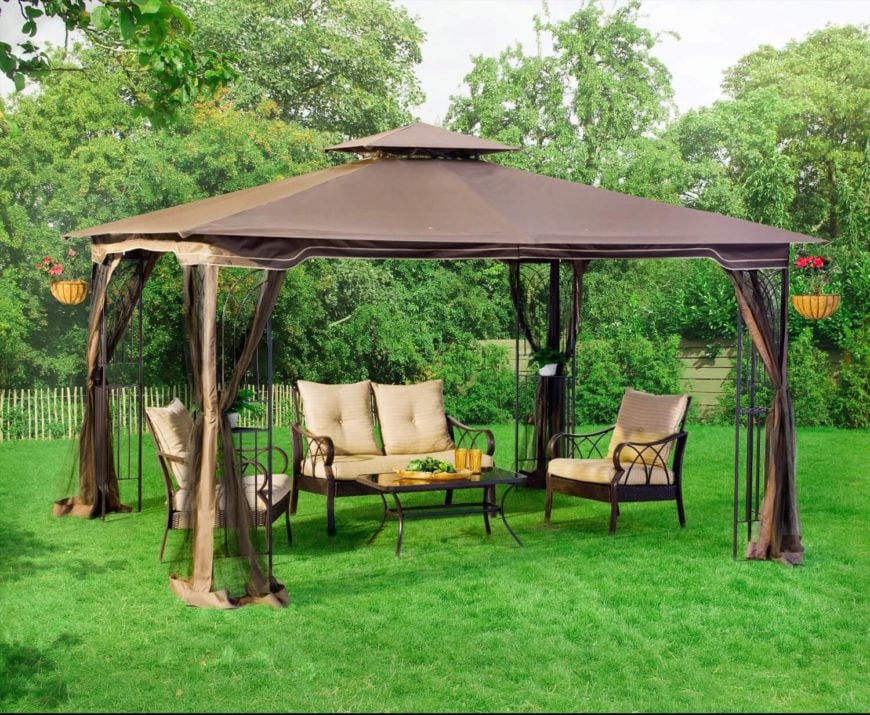 The vaulted roof keeps the interior of this gazebo feeling open and airy, even when the curtains are closed. 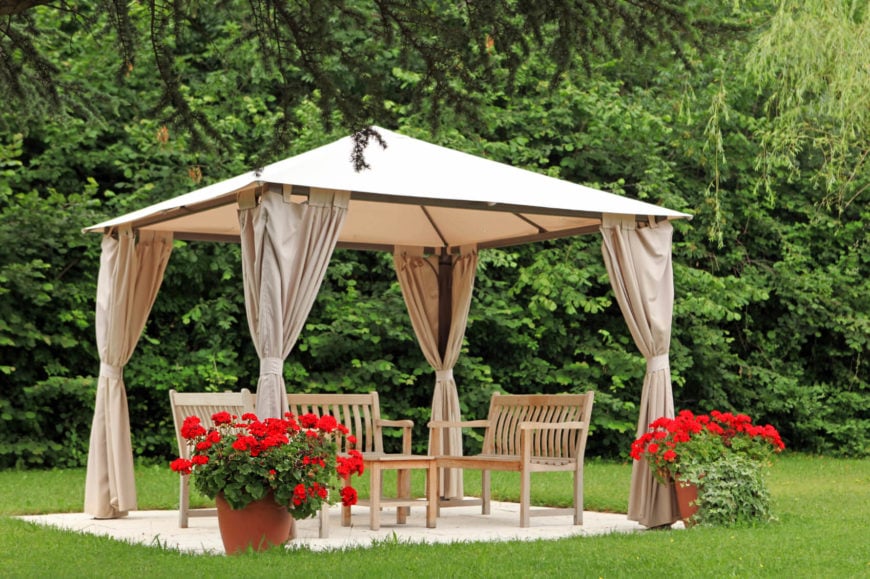 The immensely tall canvas roof of this gazebo has a structure sturdy enough to hang this lovely, elegant chandelier. It transforms this gorgeous balcony into an elegant and comfortable dining area. 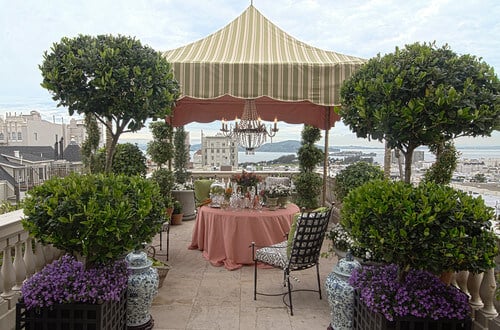 This is another great pop-up example that could be easily collapsed and taken with you on vacation. Instant shade and bug protection! 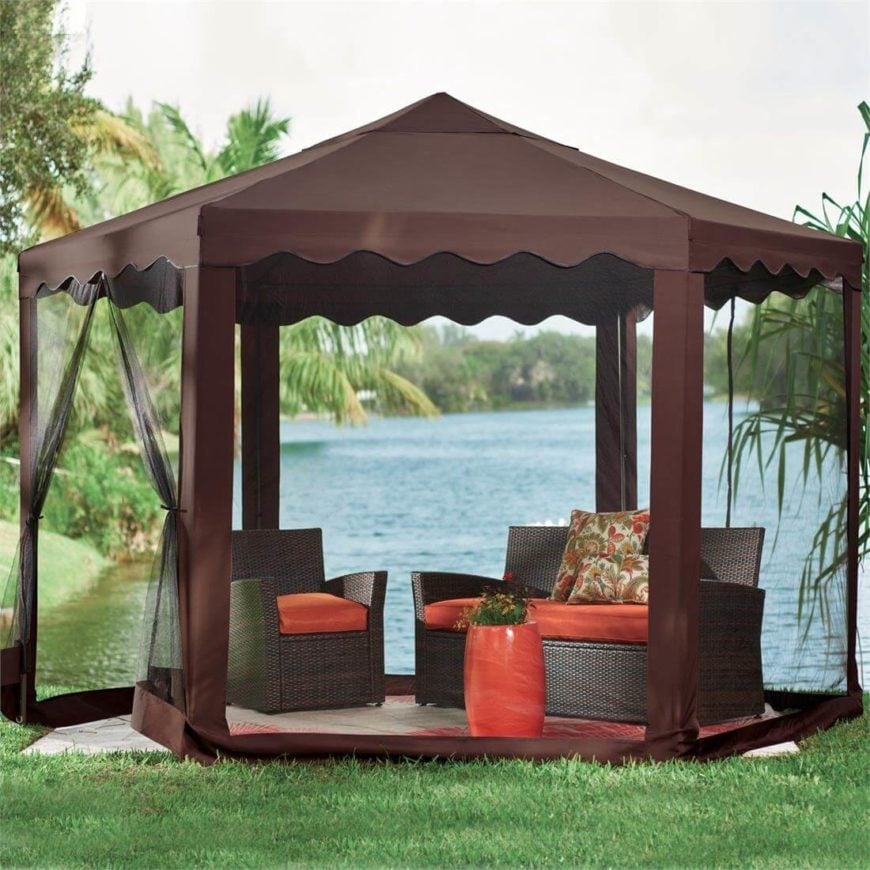 This gazebo is even closer to the poolside, and is large enough to fit a large sofa and two armchairs, in addition to tables and a footstool. 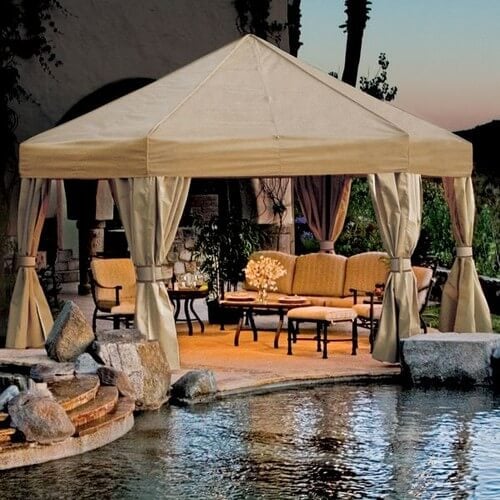 This is another simple example. The gazebo is supported by stakes and ropes that hold it upright. The sheer sides create a framing effect around a table here, but could also close around a small reading area for children. 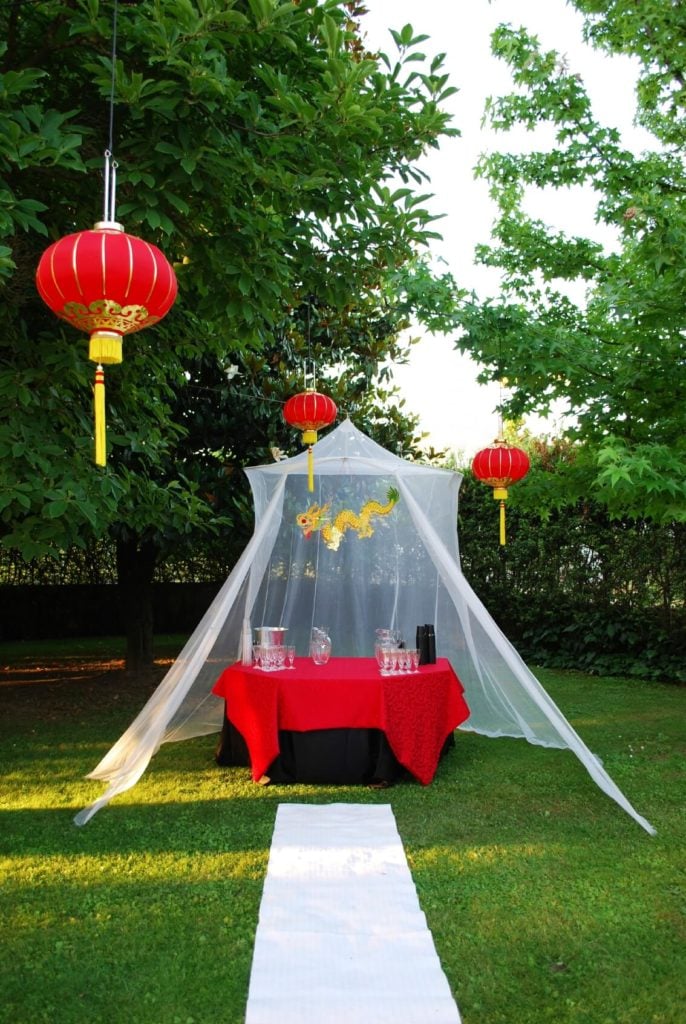 Here, we can see the effect of closing the screened panels. They’re sheer, but don’t totally obstruct the garden view. 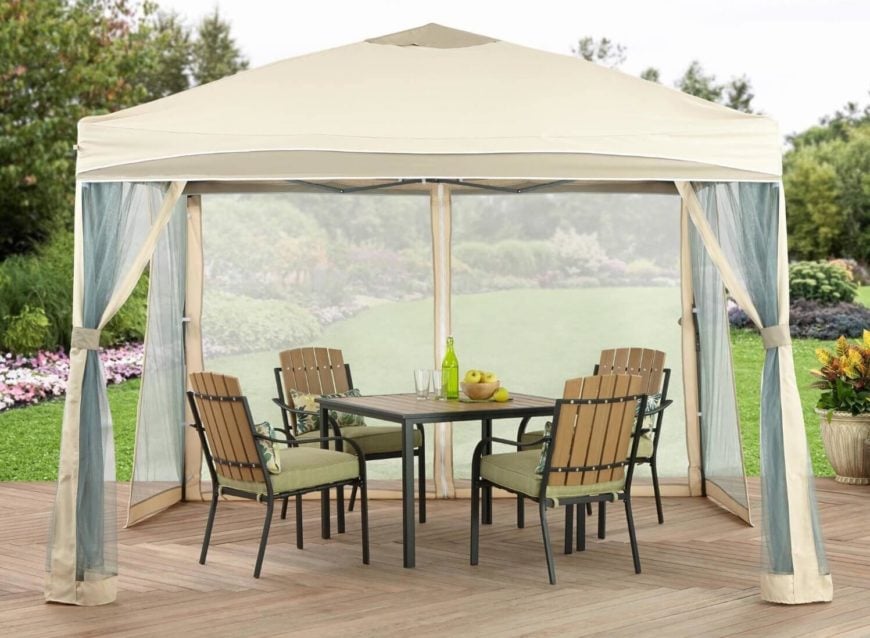 This gazebo has large aluminum panels on the outside that corral the screens when they are not in use. 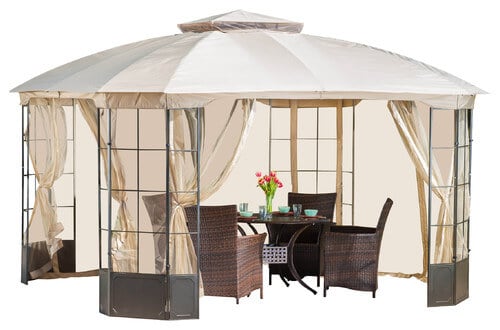