Born of practicality, a “skillet cake” was cooked in a cast-iron skillet on a stove. Skillet cakes were necessary because pioneers and the very poor often did not have access to ovens in their primitive dwellings. Only the stovetop was available for baking and cooking.

Generally, a skillet cake had a layer of fruit mixed with sugar, and then it was topped with a thin layer of cake batter. The whole thing was baked on the top of the oven with a lid on the skillet. When the cake was done, the whole thing was inverted onto the serving platter and cut into slices. 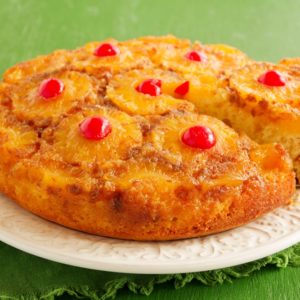 April Freeman
Once called “skillet cakes,” the upside-down cake has been around ever since the middle ages. Around 1900, methods for canning pineapple were invented and it wasn’t long before people began adapting existing skillet cake recipes for the popular tropical fruit. If you are looking for a fruity, not-too-sweet recipe for Pineapple Upside Down Cake, we have just the one for you. As an added bonus, this recipe is beautiful to serve, with lovely yellow pineapple and cheerful maraschino cherries in the topping.
Print Recipe Pin Recipe Add to Collection Go to Collections
Prep Time 30 mins
Baking Time 35 mins
Total Time 1 hr 5 mins
Cuisine American
Servings 8 Servings

The earliest record of canning pineapple is from the early 1890s. The pineapple was grown in far-flung places like Hawaii and Malaysia, and food manufacturers wanted to ship it to the markets in the continental United States. Jim Dole built a canning factory in Honolulu, and he also created intricate machines to help process the fruits, including gadgets to help with slicing the fruit into uniform shapes and sizes to make canning them easier. Soon, he began shipping his cans of pineapple to all of the major cities of the United States and Canada and created a massive marketing campaign to push his product. Cooks began experimenting with this new, delicious kind of fruit and many began to incorporate it in their old recipes for skillet cakes. By the time the 1920s rolled around, this cake became massively popular. Now, 100 years later, the only upside-down cake that most people are familiar with is the classic Pineapple Upside Down Cake.
Keyword Dessert, Pineapple Upside Down Cake, Recipe

See More RecipesClick Here for All Our Recipes
28 shares