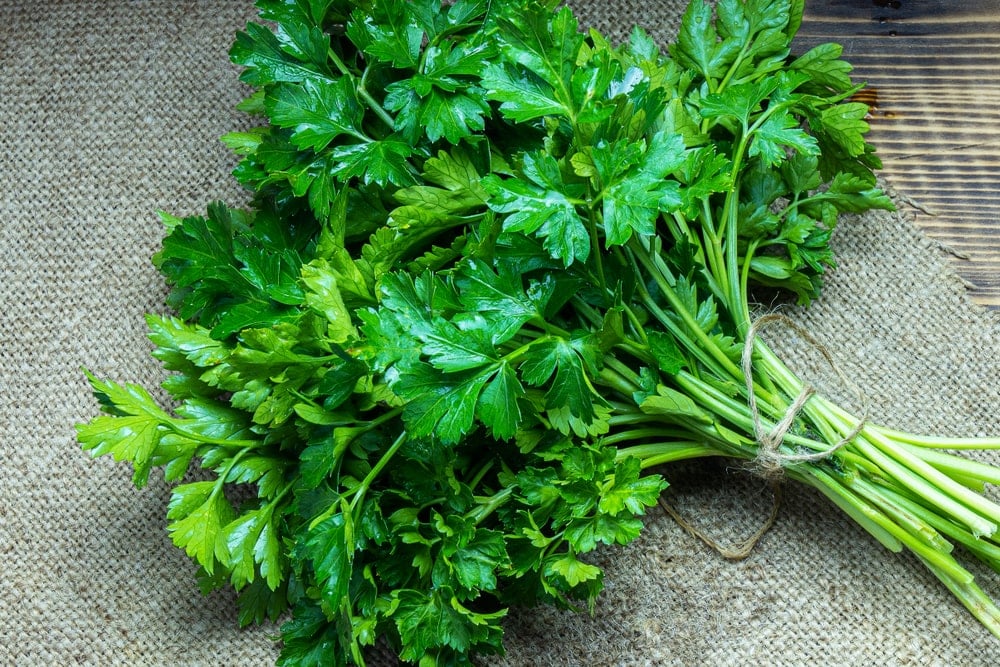 The parsley vs cilantro debate can get as heated. Many people have a passionate preference for one or the other. Their health benefits are touted, their tastes are beloved. Ironically, it can be difficult to tell them apart.

Yes! It does matter. They have different flavor profiles. The flavor of parsley also varies based on the type of parsley you are using.

Related: Types of Cilantro | How to Store Cilantro | Parsley Substitutes | Types of Parsley

Table of Contents Show
What is Parsley?
What Is Parsley Used For?
Types of Parsley
Flat Leaf Parsley
Curly Leaf Parsley
Hamburg Parsley
Cooking With Parsley
Health Benefits of Parsley
Antioxidants
Lutein
Antibacterial
What is Cilantro?
Cooking With Cilantro
Health Benefits of Cilantro
Anticonvulsant
Antimicrobial
Anti-inflammatory
Antioxidant
Cilantro vs Parsley
Parsley vs Cilantro FAQs
Does parsley look like cilantro?
What’s the difference between parsley and cilantro?
Can you use cilantro in place of parsley?
Can you replace cilantro with parsley?
Is cilantro coriander or parsley?
What are the side effects of cilantro?
Can you substitute parsley for cilantro in guacamole?
What is cilantro called in Other Countries?
Can cilantro and parsley be grown in the same container?

The scientific name for parsley is Petroselinum crispum. It’s a biennial herb and a member of the Apiaceae family. The herb is native to the Mediterranean.

Exactly where it originated is unknown, but it gets its name from the word for stone. Legend has it that it was first found growing in rocky outcrops in Greece.

What Is Parsley Used For?

Parsley may have originated in the Mediterranean, but now it’s popular all over the world. It’s best known as a garnish, but it’s also loved for its fresh light flavor.

It’s the most common herb used in Middle Eastern cooking, for good reason. There are few dishes that won’t benefit from a bit of parsley.

Parsley is a mild bitter. A well-balanced dish will stimulate all or most of the taste buds. If your dish doesn’t already include a bitter like spinach or mustard greens, a little parsley provides the contrast you need.

It also brightens flavors. It’s similar to lemon juice. A dash of lemon juice won’t make the dish taste like lemon. Instead, it brings out the other flavors in the dish. Parsley is particularly good at bringing out savory flavors.

This makes it perfect for meat dishes, including poultry and lamb, as well as soups and stews. 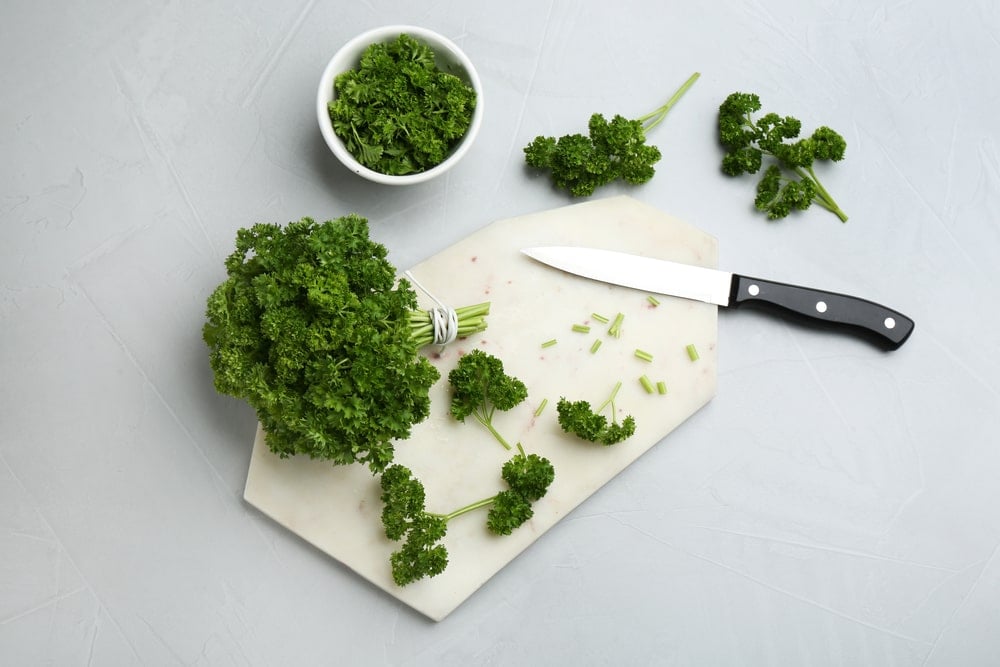 There are four types of parsley. Each one has its own benefits and uses.

The types of parsley are:

The most common type of flat-leaf parsley is Italian parsley, which looks similar to cilantro. It has a slightly bitter, peppery taste. It’s an excellent garnish.

Curly leaf parsley is milder tasting. As the name suggests, it has curly leaves. You’ve probably seen it as a garnish in restaurants. It has a bright green color and a fresh taste.

Hamburg parsley is native to Germany, which is where it gets its name. It has larger leaves and thicker roots than other types.

The leaves of this type are only used ornamentally, but the roots are frequently used in stews, particularly in German dishes. 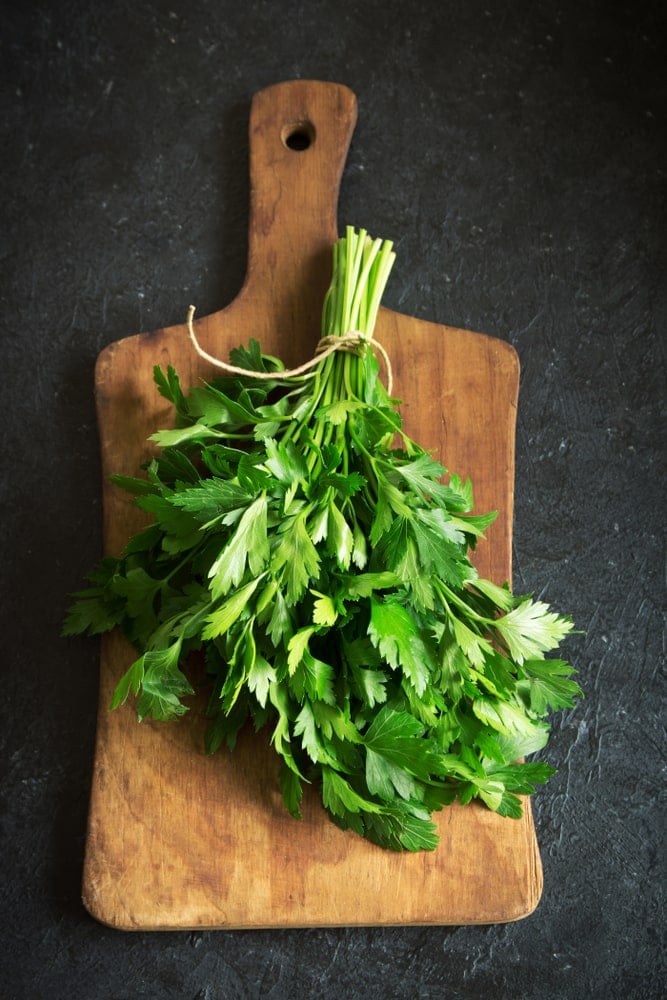 Curly leaf and flat-leaf parsley are used in cooking. Its mild flavor and ability to enhance other flavors make it ideal for cooking.

Parsley can be fresh or dried, which makes it easy to store the spice. Dried parsley is the most common form, but fresh parsley will brighten up a dish.

Fresh parsley will keep for two weeks in the refrigerator. You can also chop and freeze parsley. It will keep its flavor for six months. Dried parsley is good for one year.

Parsley is used in bouquet garni, which is a bundle of herbs used in French cooking. It’s also used as a base for sauces and salsas, including chimichurri.

Fresh parsley is usually added at near the end of the cooking process, while dried parsley is used at the beginning. 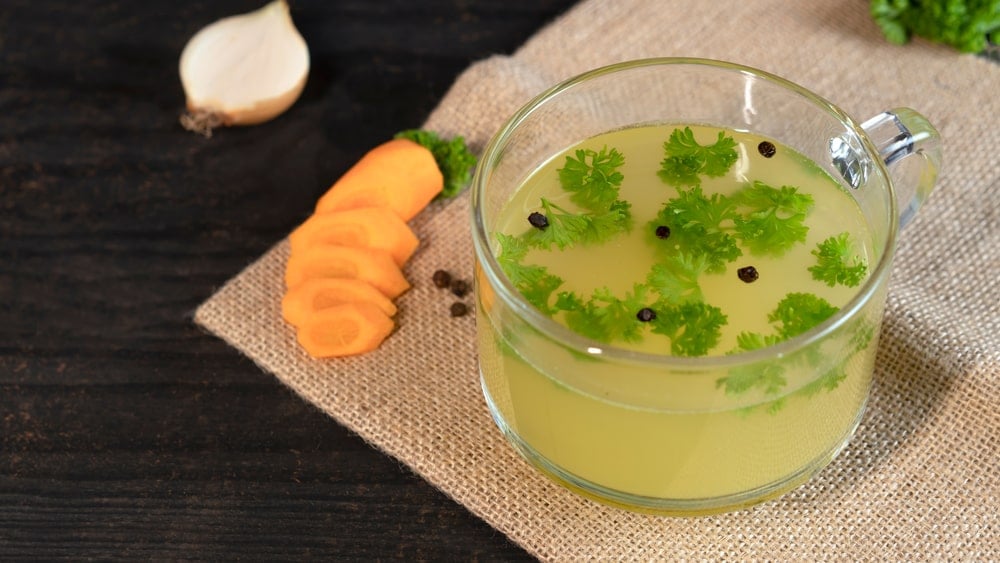 Parsley has a surprising amount of health benefits. It is known as one of the most powerful disease-fighting plants.

Health benefits of parsley include:

Parsley contains the antioxidants vitamin c, carotenoids, and flavonoids. It contains high amounts of flavonoids. A diet high in flavonoids has been shown to reduce the risk of including heart disease, type two diabetes, and cancer.

The antioxidants in parsley are particularly effective for colon cancer. A diet high in flavonoids can reduce your risk of colon cancer by 30%.

Parsley contains lutein and other substances essential for eye health. High amounts of lutein and beta carotene can decrease your risk of macular degeneration by 26%.

It is also high in vitamin A. A 1/2 cup of parsley contains 108% of your daily vitamin A, which helps protect your cornea.

Parsley extract has been shown to have antibacterial properties. In test-tube studies, it’s found to be effective against mold, salmonella, and listeria. It has not been tested in humans, but these preliminary studies are promising. 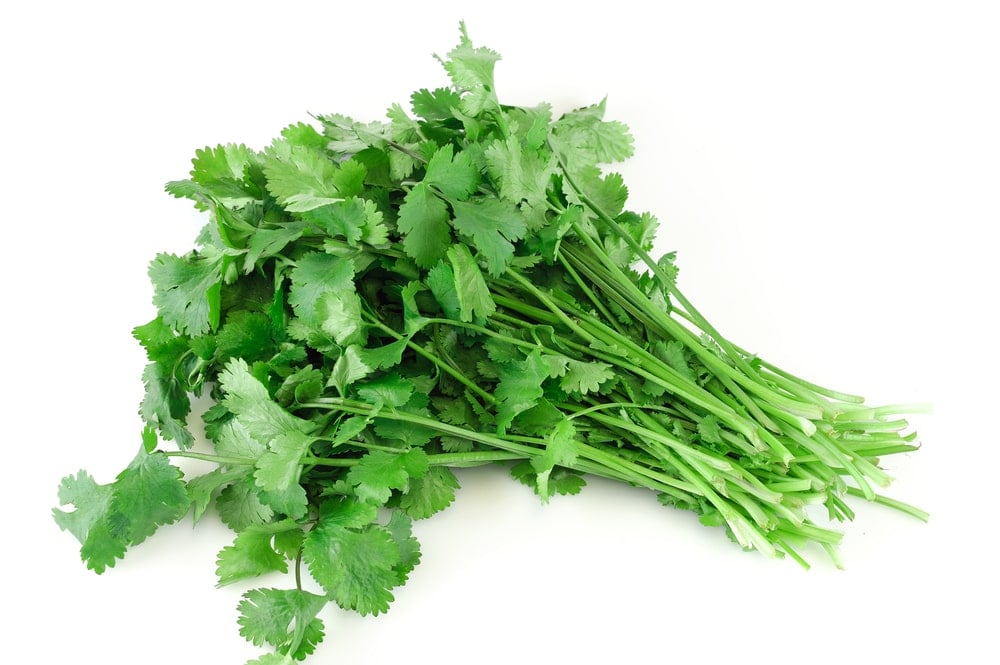 Cilantro is also a member of the Apiaceae family, which accounts for some similarities between the plants. It is generally used fresh. When it is cooked, it loses much of its flavor.

Cilantro is an herb that people tend to love or hate. It has a citrusy undertone and a mild pepper flavor.

However, it also contains aldehyde. Aldehyde is used in soap making. If you’ve ever tasted soap, the aldehyde is likely the culprit for the soapy taste. Most people can’t taste aldehyde in cilantro, but the people that can find it unpleasant.

Cilantro is actually part of the coriander plant. Interestingly, it has a completely different flavor than coriander seeds, which are also used in cooking. 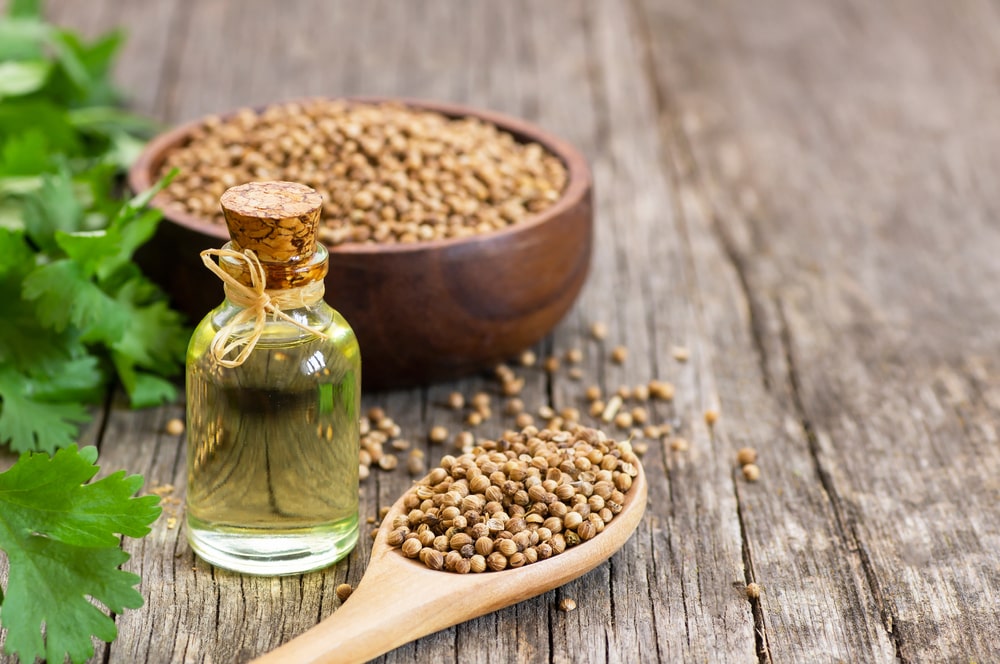 You’ll want to remove the cilantro leaves to use cilantro in your cooking. If you are making pesto, you can grind the stems and leaves.

Cilantro should be added at the end of cooking because cooking it removes its flavor. Fresh cilantro will add freshness and brightness to your dish.

If you don’t have cilantro, you can substitute culantro. Culantro has a similar taste, but it has a stronger flavor than cilantro. The advantage of culantro is that it can be used during cooking.

Parsley can be substituted for cilantro as well. However, you don’t want to substitute parsley when cilantro is used as a base. 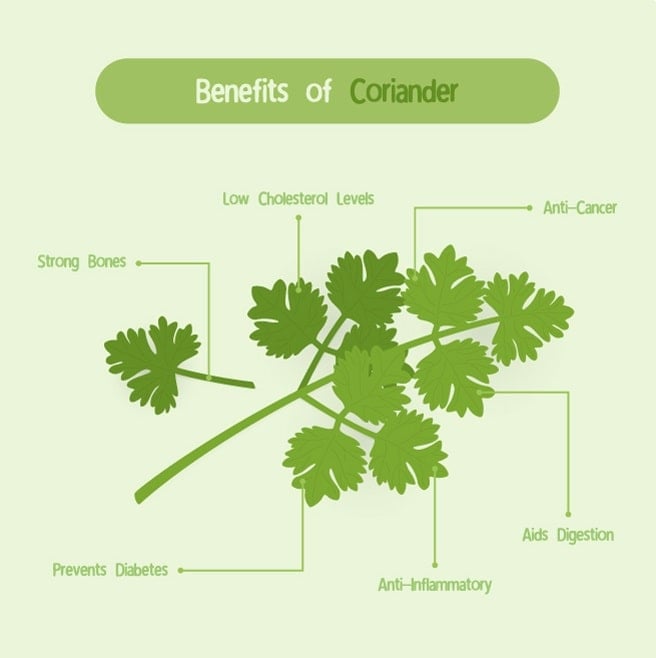 When meat is cooked at a high temperature, it releases heterocyclic amines (HCAs), which have been linked to higher cancer risk. Cooking meat with cilantro reduces HCAS.

The benefits of cilantro include:

Studies have found that cilantro can reduce the frequency of epileptic seizures. It’s believed this is because cilantro acts on the Q calcium channel. Q calcium channel dysfunction does not respond to epileptic medications, which makes the discovery very significant.

Animal studies have found cilantro and coriander seeds to be effective antimicrobial. They reduce e coli in the intestines and have been shown to treat thrush, which is a type of fungal infection.

Coriander seeds are the main component of MRQ. It is an effective treatment for rheumatoid arthritis, and increases the pain threshold for mice by 50%.

The antioxidant content of cilantro is similar to that of parsley. It’s high in lutein and beta carotene. Cilantro leaves have a higher concentration of antioxidants than coriander seeds.

It’s thought that cilantro may help prevent oxidation in the body, which is linked to many health problems. 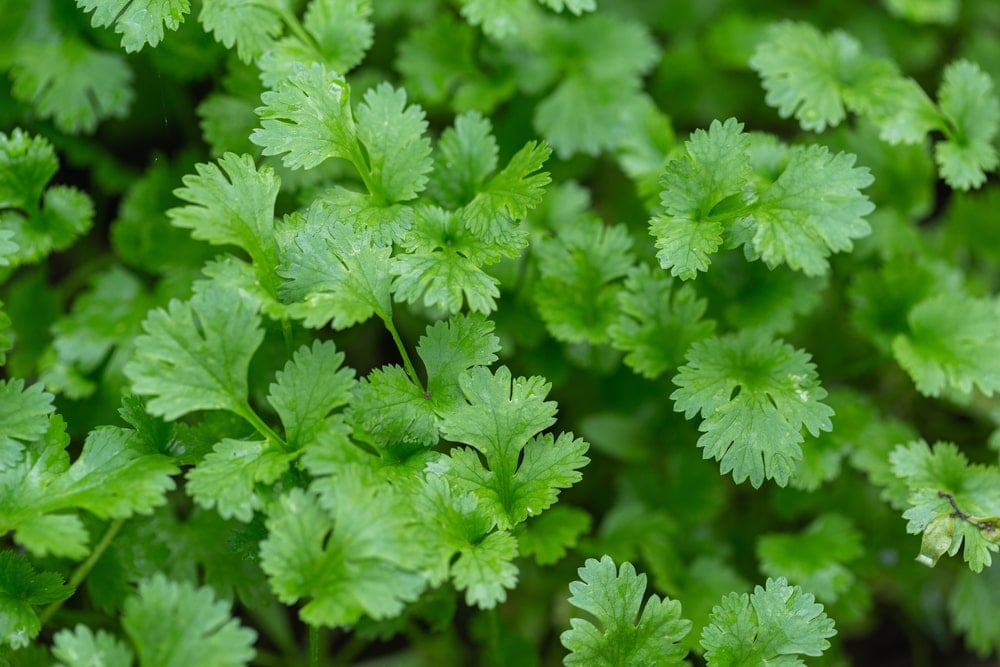 These two herbs are very similar at first glance. They even look so similar it can be difficult to tell them apart. Which one is best is a matter of debate, but their differences make them ideal for different uses and preferences.

They also differ in taste and smell. When parsley is rubbed or chopped, it gives off a strong grassy smell. This is also present in the flavor, along with pepper undertones.

Cilantro has a fresh citrus smell and tastes to most. Unless you are unfortunate enough to notice the soapy or lotiony aspect.

What’s the difference between parsley and cilantro?

Parsley and cilantro have a different taste and smell. Parsley tastes grassy or green, while cilantro has a citrusy flavor. Both have a hint of peppery taste.

Can you use cilantro in place of parsley?

Cilantro can be used in place of parsley. However, when used in cooking, chives are a better replacement. Celery and carrot leaves, along with cilantro, work well as a garnish in place of parsley. If you are using parsley for a base, like pesto, there isn’t a suitable substitute for parsley.

Can you replace cilantro with parsley?

Is cilantro coriander or parsley?

Cilantro is actually part of the coriander plant, but it is in the same family as parsley.

What are the side effects of cilantro?

Excessive amounts of cilantro can have several harmful effects. It can damage the liver. There are compounds in cilantro that help cleanse the liver, but in higher amounts, they can have the opposite effects.

In smaller amounts, cilantro is known to help heal digestive issues. However, it can also cause stomach upset, acid reflux, and diarrhea in higher amounts.

The oils in cilantro can also make your skin more sensitive to sunlight, which increases your risk of sunburn and skin cancer.

Can you substitute parsley for cilantro in guacamole?

You can substitute parsley for cilantro in guacamole. It works best if you add lime juice to provide the citrus notes found in cilantro. For a slightly different flavor, you can add basil in place of cilantro.

What is cilantro called in Other Countries?

Can cilantro and parsley be grown in the same container?