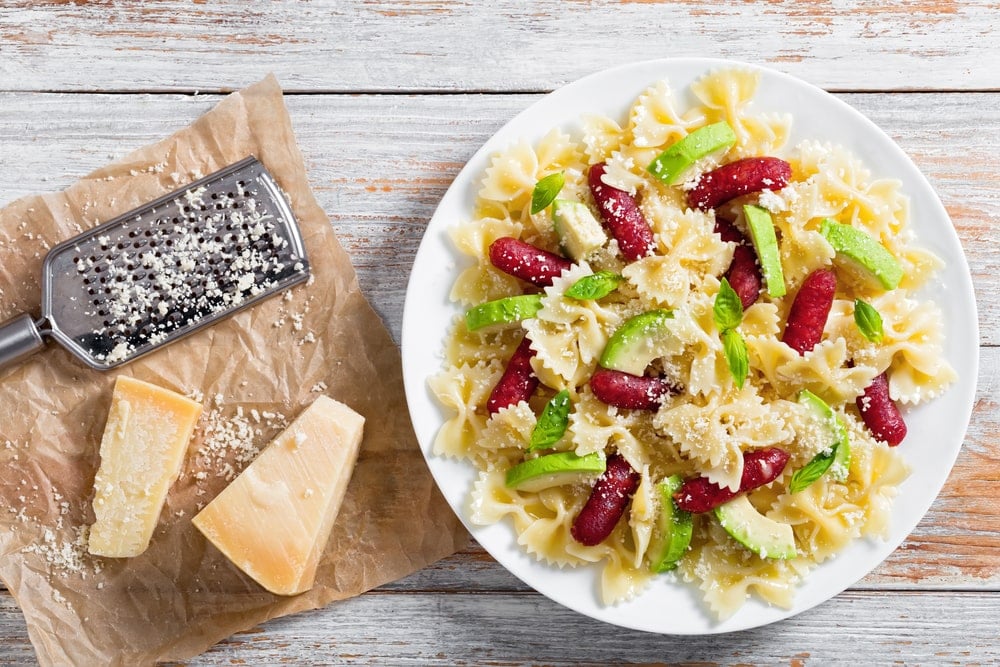 Myth says that Marco Polo brought pasta back to Europe after his famed trip to China, but that is actually untrue. Pasta was already becoming popular in Europe hundreds of years before Marco Polo was born. In fact, dyes for creating colored pasta have been discovered in Sicily, and they date back 3000 years! 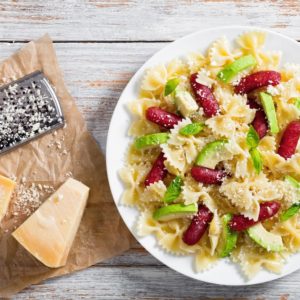 April Freeman
Whether you are hosting a cookout for friends and neighbors or just throwing some burgers on the grill for your family, having a wonderful pasta salad recipe is something that everyone should have in their cooking repertoire. Pasta salad is light, cool, and refreshing for a hot summer’s day, and it is perfect when the heat has taken away your appetite for heavier fare.
Print Recipe Pin Recipe Add to Collection Go to Collections
Prep Time 20 mins
Chilling Time 2 hrs
Total Time 2 hrs 20 mins
Cuisine American, Italian
Servings 4 People

Pasta is generally created from durum wheat. This wheat is different from the kind of wheat that is typically ground up and made into leavened bread. Durum wheat has a very high gluten content and low water content and the amount of gluten in the flour is what gives pasta its distinctive texture. Manufacturers take durum wheat, salt, eggs, and water and create a pasta dough that is then shaped into distinctive kinds of noodles. Durum wheat pasta was popular in Italy. The pasta makers there would mix up a batch of dough, create the pastas that they wanted in the shapes they needed and then allow the noodles to dry. The dried pasta noodles would keep for a long time, even in Italy’s damp, warm climate. In Italy, herbs and veggies grow very easily in the warm climate, and soon, cooks were pairing their favorite pastas with herbs and vegetables. Thomas Jefferson is credited with the introduction of pasta to the United States. He was in Paris in the 1700s and he discovered the wonders of pasta. Jefferson loved it so much that he took an entire two cases of pasta home to the States with him. When he ran out, he asked a friend in Naples, Italy to supply him with more pasta. In the late 1800s, great numbers of Italian immigrants began coming to the United States. These people brought their love of pasta with them, shared their recipes for pasta with others in the United States, and soon pasta was just as popular in the States as it was in Europe. While the origins of pasta itself are European, the origins of pasta salad are distinctively American. In the early 1900s, cooks in the United States began experimenting with making recipes with cold pasta. They would add dressings, veggies, and herbs to macaroni to create macaroni salad. By the 1960s, macaroni salad was a staple of potluck dinners and other meals. Before you begin our Parmesan Bow Tie Pasta Salad recipe, you need to know something about cooking pasta for a cold dish. Cooking pasta for a pasta salad is a little different from cooking it for a hot dish. First of all, pay close attention to the time that your pasta is boiling. Overcooked pasta will make your pasta salad mushy and ruin the texture. Err on the lower range of cooking times suggested on your box of pasta. Second, rinse the pasta under cool water in the sink after you have drained it. Doing this will keep the pasta from continuing to cook and remove any starch from the noodles that can make the pasta sticky. This recipe for pasta salad features several distinctive flavors. It includes bacon, olives, fresh basil, and garlic along with the texture of bell peppers. Next time that you need a great recipe for a pasta salad, try our recipe for Parmesan Bow Tie Pasta Salad. Our recipe for Parmesan Bow Tie Pasta Salad makes about enough pasta salad for four people. However, you can double it if you’re feeding a crowd. Simply double all of the ingredients and continue to follow the instructions below.
Keyword Parmesan Bow Tie Pasta Salad, Recipe, Salad