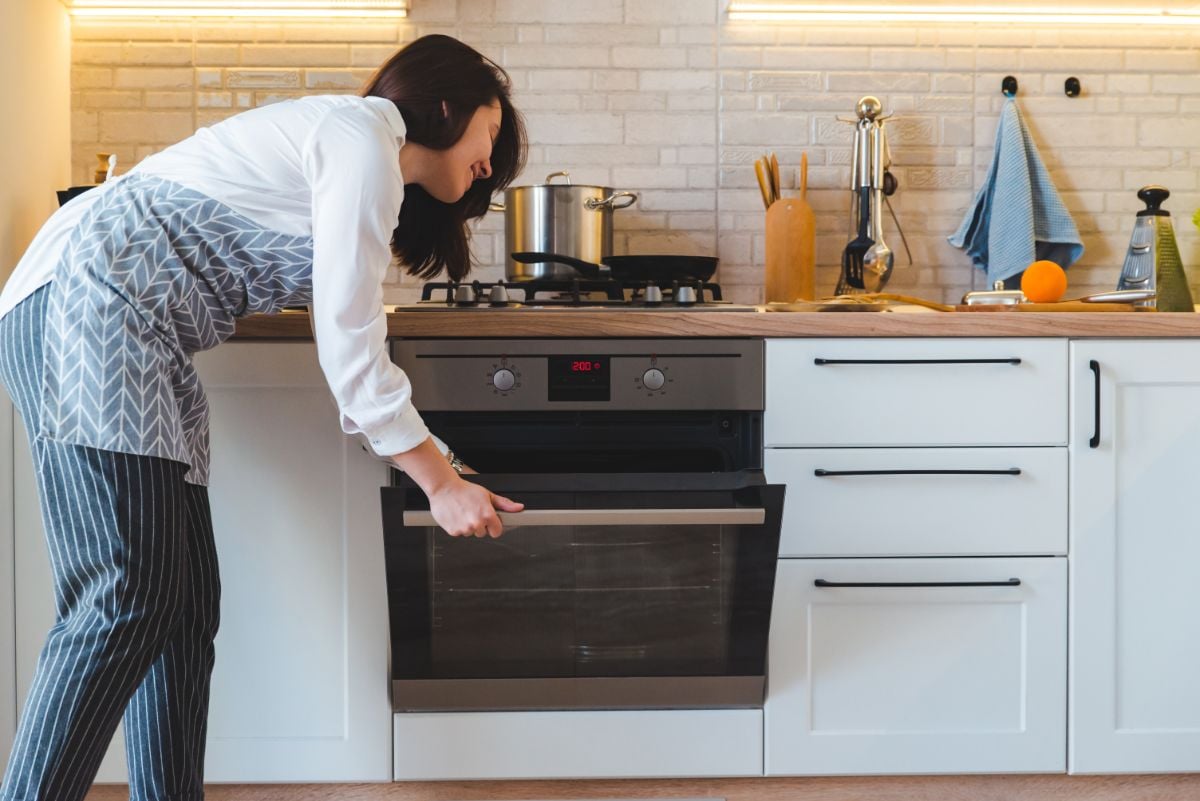 Cooking relies on heat and includes the many ways these elevated temperatures have the potential to transform food and other things. Heat and food interact, and how they engage determines how the food cooks and, ultimately, how it tastes. History reveals that people traditionally cooked on an outside fire.

For example, a frying pan combines oil and hot metal to cook food, while a broiler cooks your food using radiant heat that is directly applied to the food or pan.

When referring to kitchen appliances, people interchangeably use the terms oven and stove as if these concepts were the same identical appliance. While an oven and a stove are both cooking-related, these two devices are different in terms of their use and features.

Related To: Convection vs Conventional Oven | Oven vs Slow Cooker | Oven vs Air Fryer | Oven vs Grill | What is the Drawer Under the Oven for? | Why is it Called Dutch Oven?

Table of Contents Show
What is an Oven?
Types of Ovens
Gas Oven
Electric Oven
Microwave Oven
Convection Oven
Toaster Oven
Earth Oven
Ceramic Oven
Steam Oven
Wall Oven
Double Oven
Masonry Oven
What is a Stove?
Home Heating Stoves are More Efficient Than an Open Fire.
Is it a Stove or a Range?
Types of Stoves
Heat Generated By Gas
Heat Generated By Electricity
Heat Generated By Induction
A Word about Professional Stoves
Oven vs. Stove – The Take-Away

What is an Oven? 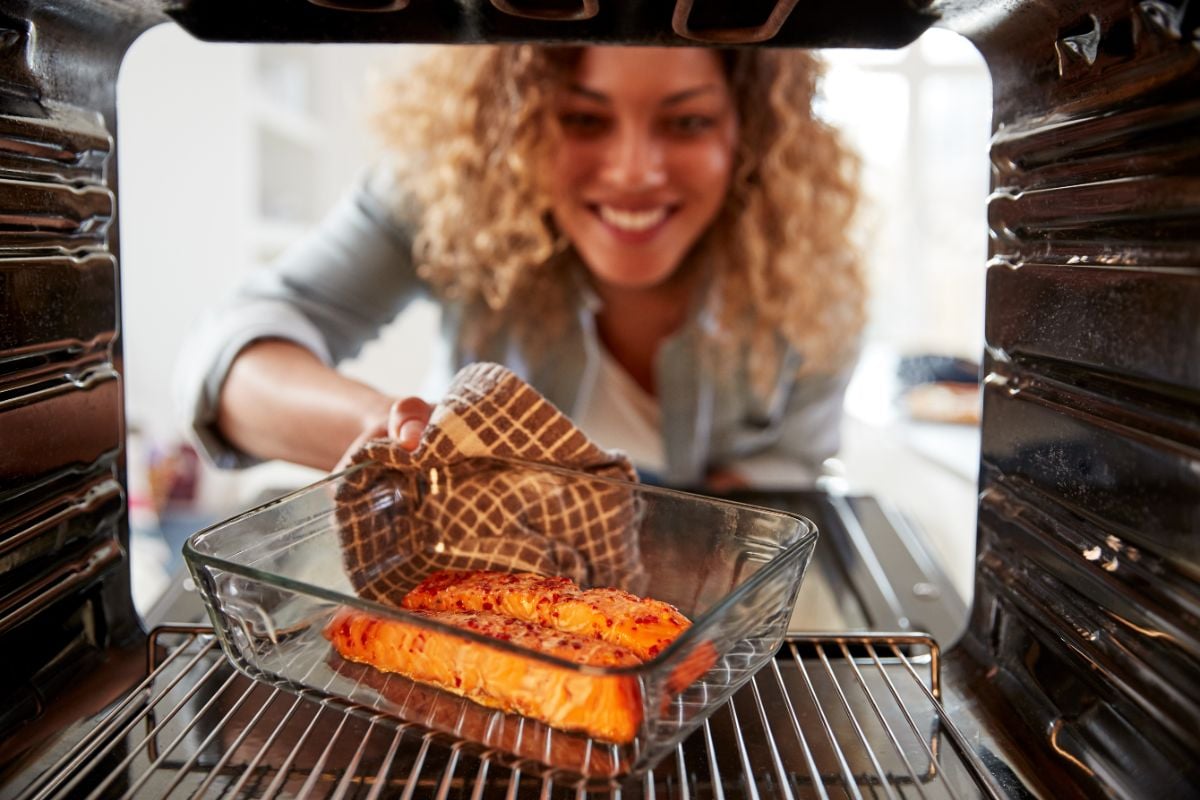 An oven, which has been used for millennia, is an instrument in which foods (or other materials) are exposed to high temperatures in an enclosed environment. The hollow chamber of an oven allows the operator (or chef/cook) the opportunity to control the heated environment to create the desired results.

Because ovens are designed for many purposes, ovens generate heat differently. Other than cooking, ovens (and sure furnaces) can be used for pottery, ceramics, metals, home/office heating, and even manufacturing glass.

The gas oven that would set the standard for the modern gas oven was commercially produced beginning in the 1830s. The gas oven, as a home device, was improved with the invention of the thermostat, an important feature that helps control temperatures. In addition, oven manufacturers began coating the oven with enamel, which helps with cleaning.

An electric oven is similar to a gas oven, except that its heat source is that of Joule (or resistive) electricity. Electric-powered ovens take the most time to reach your desired temperature.

The microwave oven was conceptualized in the mid-1940s; this type of oven is used to quickly heat food or objects using electromagnetic radiation.

These small electric toaster ovens include a front door and removable racks for baking. While toaster ovens can easily toast bread, they are also multi-functional on a smaller scale.

An Earth oven has been in use by many cultures for many hundreds of years. This oven is created by digging a pit in the ground that is typically heated by smoldering debris and rocks. An Earth oven cooks food slowly through a roasting technique. They are often found in archeological sites as evidence of early civilizations and human inhabitation.

This type of oven (which is also known as a kiln) is made of clay or other materials like clay. The Indian culture refers to this type of oven as a tandoor. A Ceramic oven can also be constructed of brick and shares a similar history with pizza, dating even further back to the Roman Empire.

The steam oven generates heat by way of steam.

A gas or electric wall oven that is typically mounted at eye (or waist) level to minimize bending.

Typically a wall or built-in double oven that offers two separate heating chambers; one oven may be a microwave or two conventional ovens.

This type of oven offers a fireproof baking chamber. A masonry oven is closely related to pizza and bread baking but can be used for most baking needs. A Masonry oven can be made of concrete, brick, clay, or stone. Often, a masonry oven is coal or wood-fired (especially in the 19thcentury) but can also be found to be used and powered by natural gas or electricity heat sources.

What is a Stove? 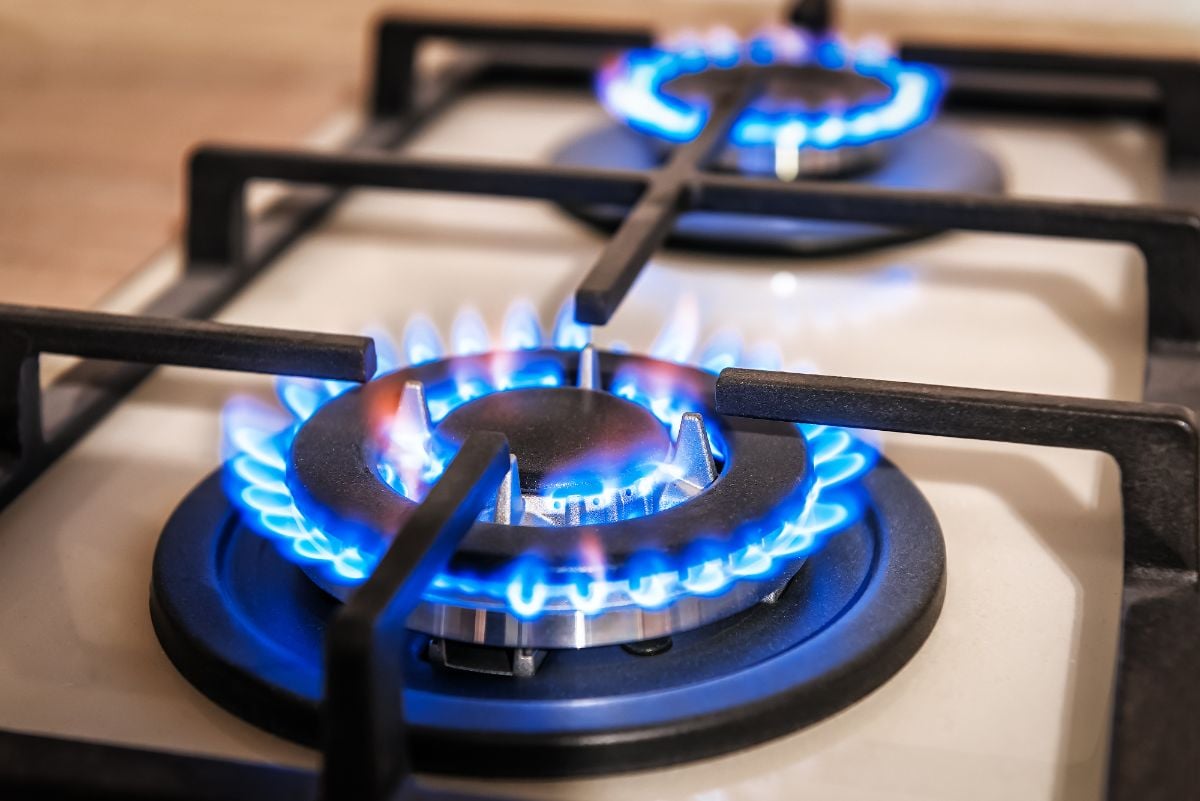 A kitchen stove (which may also be known as a cooker or stovetop) is a type of kitchen appliance that was designed with the primary function of cooking food. A traditional stove cooks food by applying direct heat as a part of the cooking process. Many stoves are combined with an oven attached (usually beneath) for baking and other cooking methods.

In the early 18th century, stoves were traditionally fueled by wood and used to not only cook but keep a home warm and comfortable.

Home Heating Stoves are More Efficient Than an Open Fire. 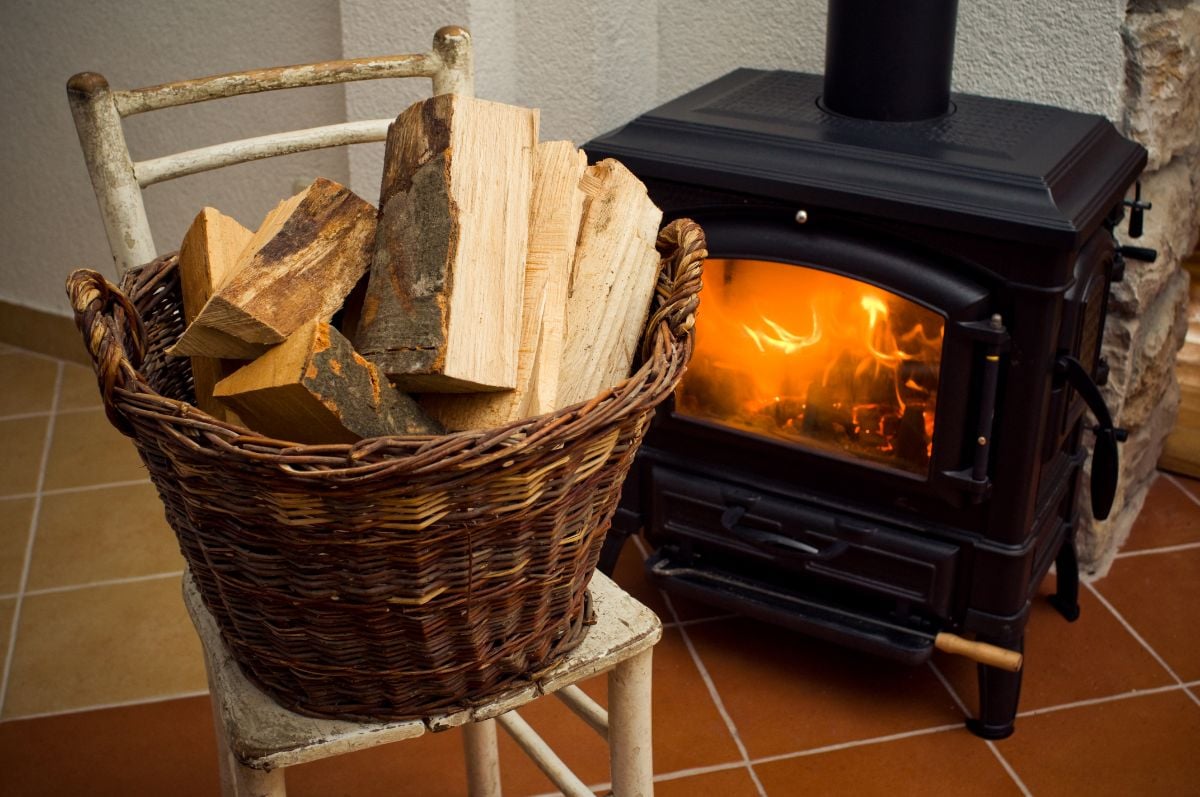 When compared to a simple open fire, an enclosed stove offers both greater heat efficiency as well as control. Simply enclosing a fire within a chamber (connected to a chimney) nearly doubles the combustion temperature – offering more heat in an efficient manner.

Because of the higher temperatures achieved in an enclosed fire, gases in the smoke are also completely burned, which creates a thermal efficiency of 80%, compared to an open fire’s 20% efficiency. Said another way, there is four times as much heat from the same source when used in a modern wood stove as that of an open fire.

Plus, heat from a stove –

The earliest history of a wood-burning stove for use in a kitchen – the Castrol Stove, was developed by a French designer in 1735.  More modern stove versions – both electric and gas, were developed over the next century or two.

Is it a Stove or a Range? 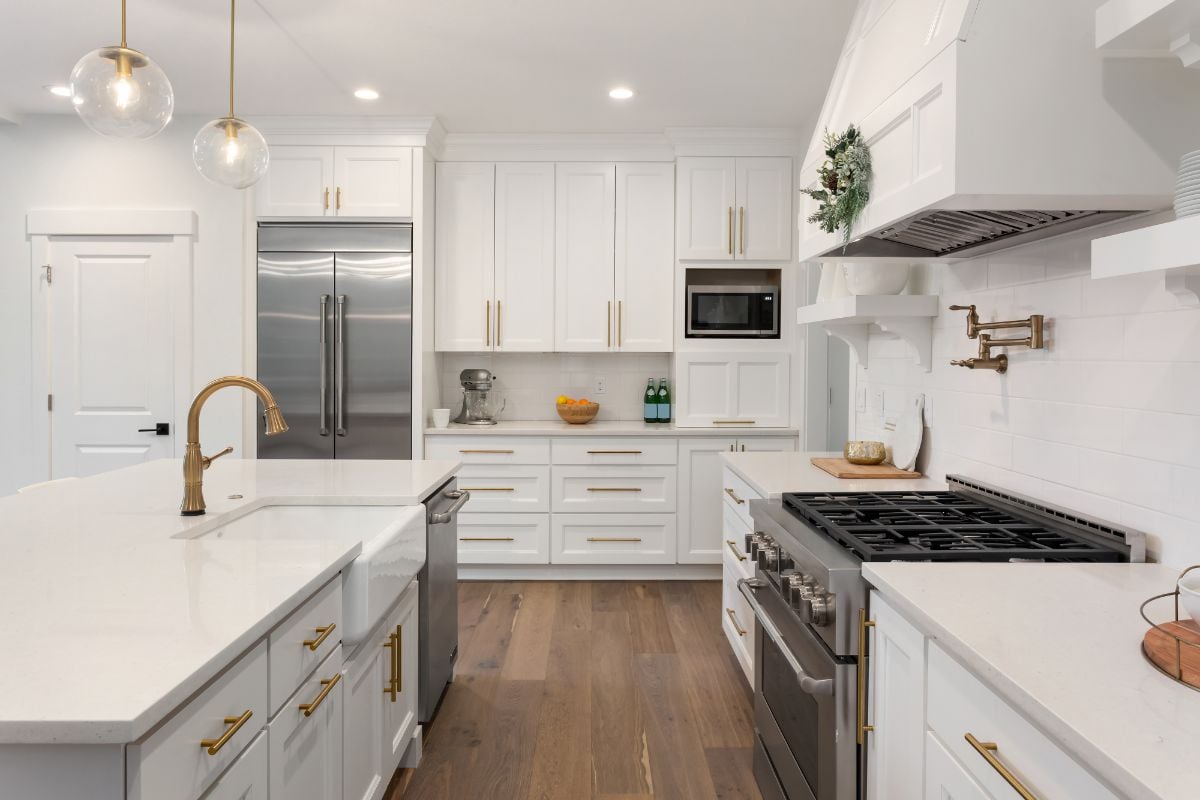 Many people interchangeably use the words ‘stove’ and ‘range’ when referencing a classic appliance for the kitchen that includes both an oven and a stovetop.

Appliance retailers likely termed the oven/stovetop combo – a ‘range’ because the term – Stove- has more than one meaning – ultimately causing unnecessary confusion.

Strictly speaking, though, stoves were invented long before the modern kitchen range.  A stove can also refer to a home heating device – similar to a cast-iron, old-fashioned wood-burning stove that was used to heat a log cabin and may have doubled as a heating element by creative pioneers. The term ‘range,’ when referring to an appliance, always refers to a device that assists in cooking.

The reality is that in the modern era of kitchens, all stoves (or ranges) will include both an oven as well as a stovetop as a combination appliance. However, as noted above, ovens may be purchased separately from stovetops. And, of course, there are portable stovetops that are used for camping, etc. 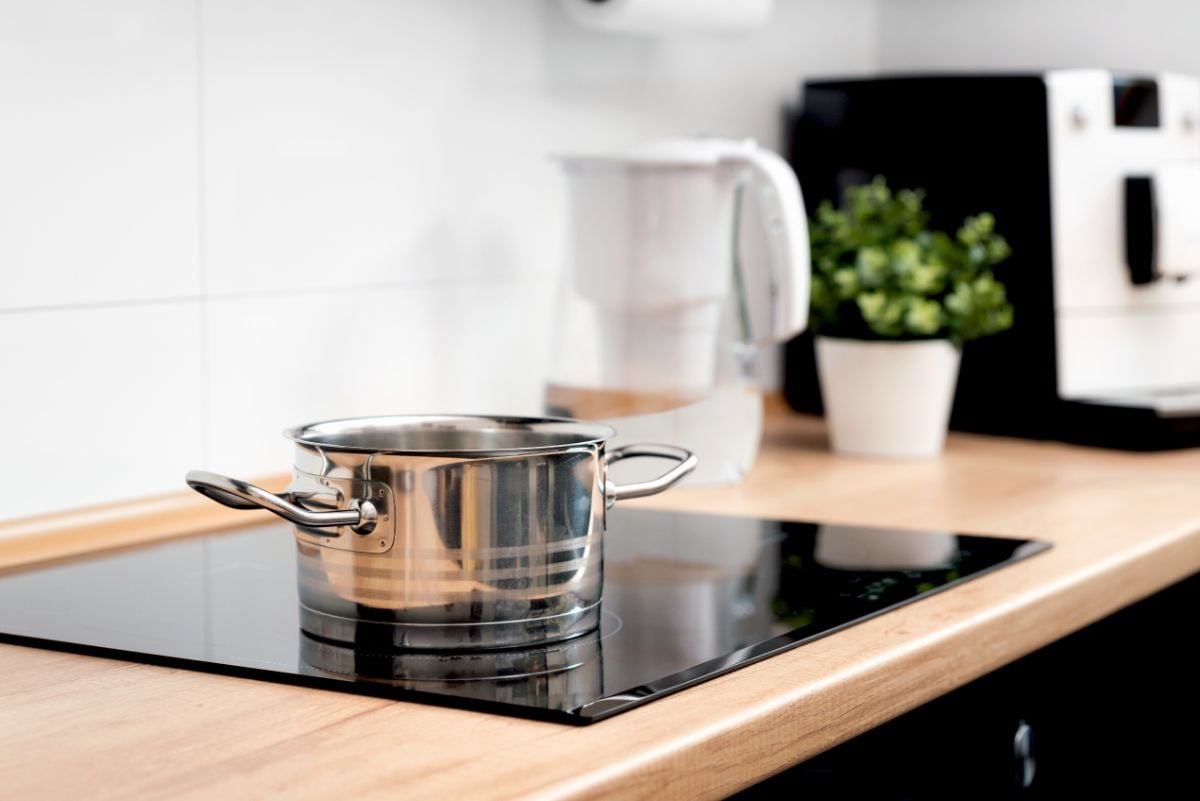 Each type of stove offers different efficiency (with regard to heat) as well as function, depending on the materials used and the design concept. Stoves can be fueled in a number of ways –

A gas stove is durable, simple to use, and offers precise control of the temperature. A gas stove is typically powered by natural gas or propane. Gas stoves provide instant heat and can also be used to apply direct heat, such as roasting peppers.

Additionally, gas-powered stoves allow you to use a variety of cookware, including specialty cookware like tempered glass or anodized non-stick pans, among others. Finally, gas stoves will continue to work even in the event of the loss of electricity. While the ignitor may be electric, a flame can be started with a match or hand lighter.

There are many types and styles of electric stoves. First, electric stoves take less time to heat and will not heat up the kitchen as much. Electric stovetops are simple to clean as there are no fuel ports to worry about blocking.

An electric type of stove can be a bit more dangerous as it is not apparent when the burner is hot to the touch. And an electric stove tends to be less efficient, so it is more costly to operate. The following types of stoves are two of the most popular electric stove types:

Is a specific type of electricity-sourced induction cooktop that offers the best precision in control and ease of cleaning. An induction stovetop uses high-frequency magnetic fields to transfer its generated heat directly to the pan or pot. The induction’s superior efficiency translates to faster cooking and less energy used, although an induction stovetop has a detectable hum when on.

This type of stove reduces the potential danger as the heat is not conducted until induction-compatible cookware touches the burner. Induction stove cookware is easy to identify. To test, place a magnet on the cookware’s bottom surface.

If the magnet sticks, the cookware you are testing will work on an induction stove.

While cast iron will work, its heavy, clunky tendencies may damage the stovetop. Note, though, that an induction stovetop tends to be more expensive than non-induction options.

A Word about Professional Stoves 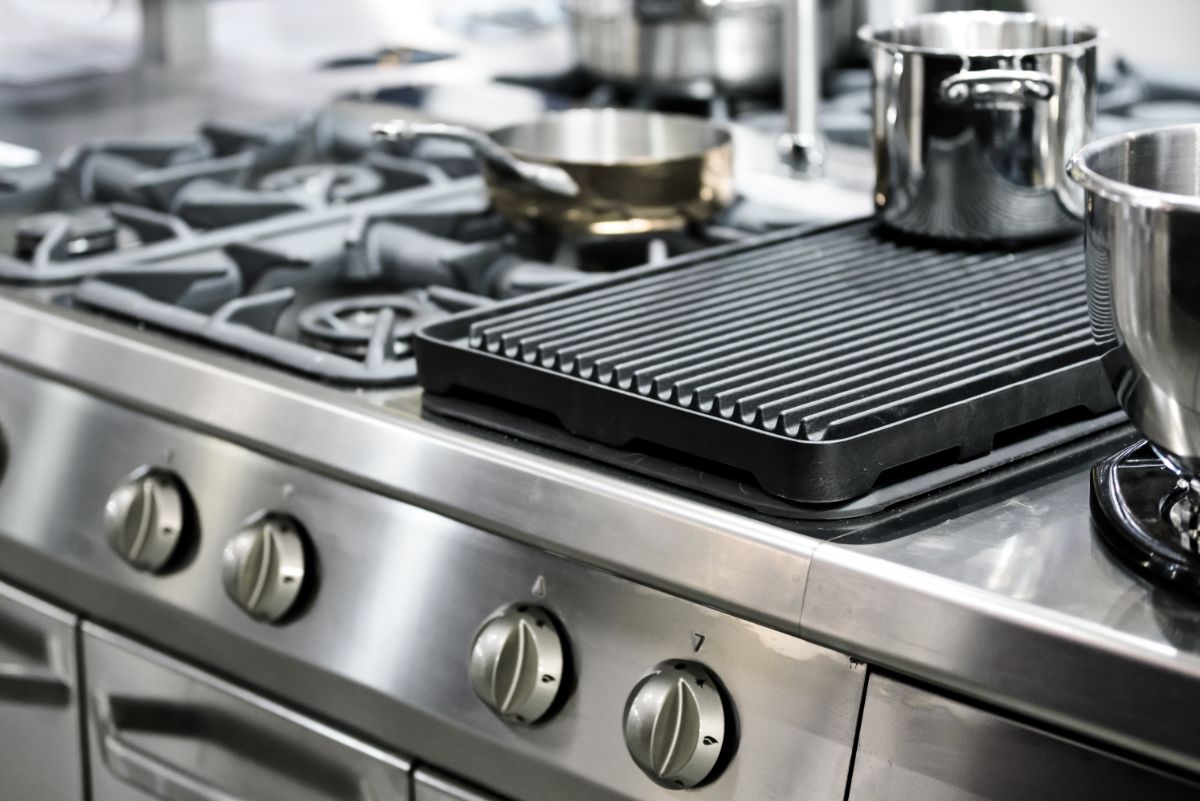 A professional stove offers high-performance heat and typically more burners than a non-professional option. The high heat gives cooks and chefs the capacity to sear, stir-fry, and deep-fry, to name a few. Some professional stoves are WIFI capable which can help fine-tune the cooking process.

Oven vs. Stove – The Take-Away

An oven is a kitchen appliance that can be part of a stove or purchased separately – often as a wall unit. A stove (or range) typically combines both a stovetop and an oven.

Each of these cooking devices has a specific purpose. An oven is a cooking chamber that can be used to bake, roast, reheat or broil your next delicious meal. The stove offers direct heat so you can stir-fry, sear, boil, or poach your favorite dishes, among others.