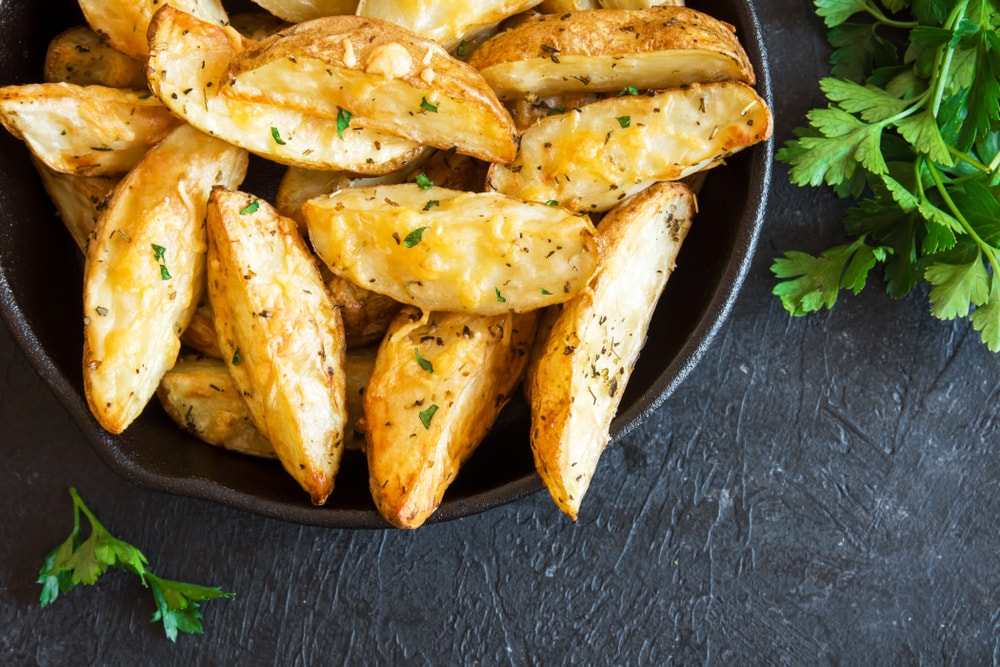 On those nights when you plan on grilling out, nobody wants to spend tons of time in the kitchen preparing the side dishes to accompany the main meal. This delicious recipe for Savory Oven Baked Loaded Potato Wedges only take a few minutes to prepare before baking.

In the summertime, grilling is the perfect solution for dinner. Everyone loves grilled hamburgers, steaks, chicken, and veggies. But, when you cook on the grill, you still have to figure out the side items to round out the meal. Nobody wants to spend tons of time in the kitchen on a night when you’re grilling.

After all, the point of grilling out is to avoid making a big mess in the kitchen and spending tons of time over a hot stove. This recipe for Savory Oven Baked Loaded Potato Wedges are easy to make, take only a few minutes to prep, and they’re also loaded with everyone’s favorite flavors–savory spices, delicious bacon, and of course, cheese.

Another nice thing about this recipe is that it only takes a minimal amount of preparation. You will only need to dirty a knife, cutting board, spatula and a baking sheet. Additionally, by using aluminum foil on the baking pan, clean up will be a snap. The steps to this recipe only take a few minutes–cutting the potatoes, seasoning them, tossing them in olive oil, and the rest of the magic happens in the oven.

Of course, this recipe does take some time to bake. Be sure that you allow for a good forty to forty-five minutes in the oven. However, during that time, you can be firing up the grill, preparing the rest of your dinner, and you may even have time to play a quick game of catch with the kids in the backyard while you’re waiting for dinner to finish.

For this recipe, you will want to use good quality Russet potatoes. Since the potatoes are not peeled, you may want to consider purchasing organic potatoes to minimize your family’s exposure to farm chemicals and pesticides.

Everyone knows how bad traditional French fries are for you, but this recipe can satisfy your French fry craving in a healthier way. These potato wedges will give you a crispy French fry texture paired with the soft insides of a typical potato. You will be in charge of the amount of salt and oil that you consume, and since you’re using additional herbs and spices to season the potato wedges, you probably won’t need to use as much salt as you would otherwise. If you’re trying to avoid dairy products or bacon, feel free to omit these ingredients and make these potato wedges plain.

Step 2:After thoroughly scrubbing your potatoes, use a cutting board and a sharp chef’s knife to cut the potatoes into wedges. 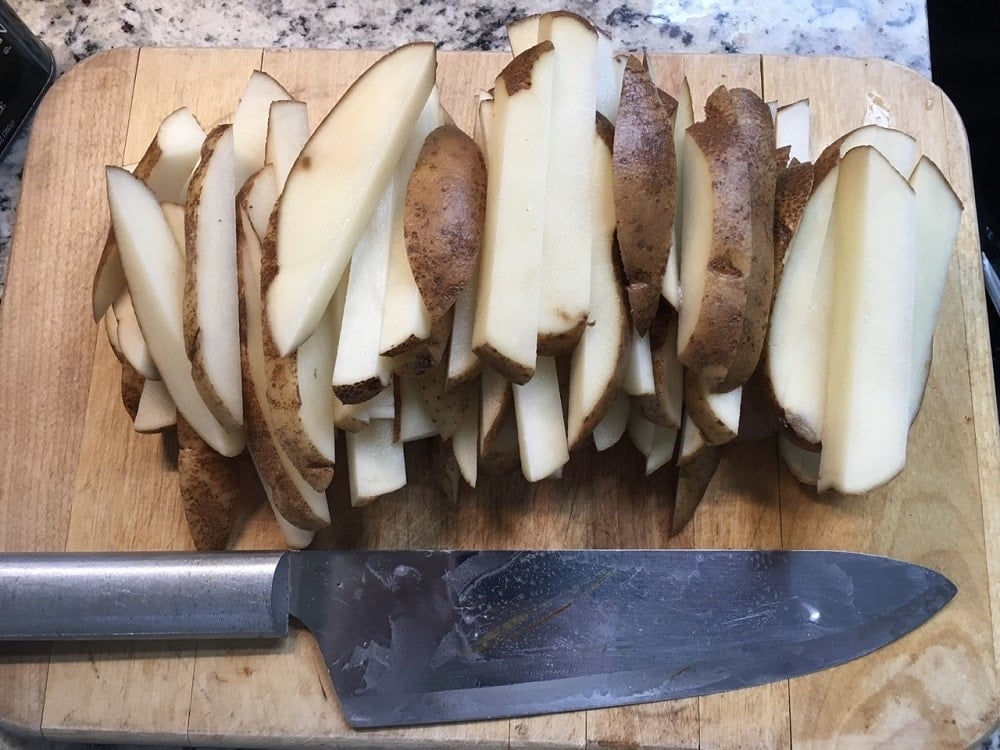 Step 3: Spread the potatoes in an even layer on the baking sheet.

Drizzle the oil all over them. Toss the potatoes in the cooking oil using a spatula to stir them around. You want them thoroughly coated so that the outer layer of potato will be slightly crisp.   Sprinkle the paprika, salt, onion powder, and garlic powder over the potatoes evenly. 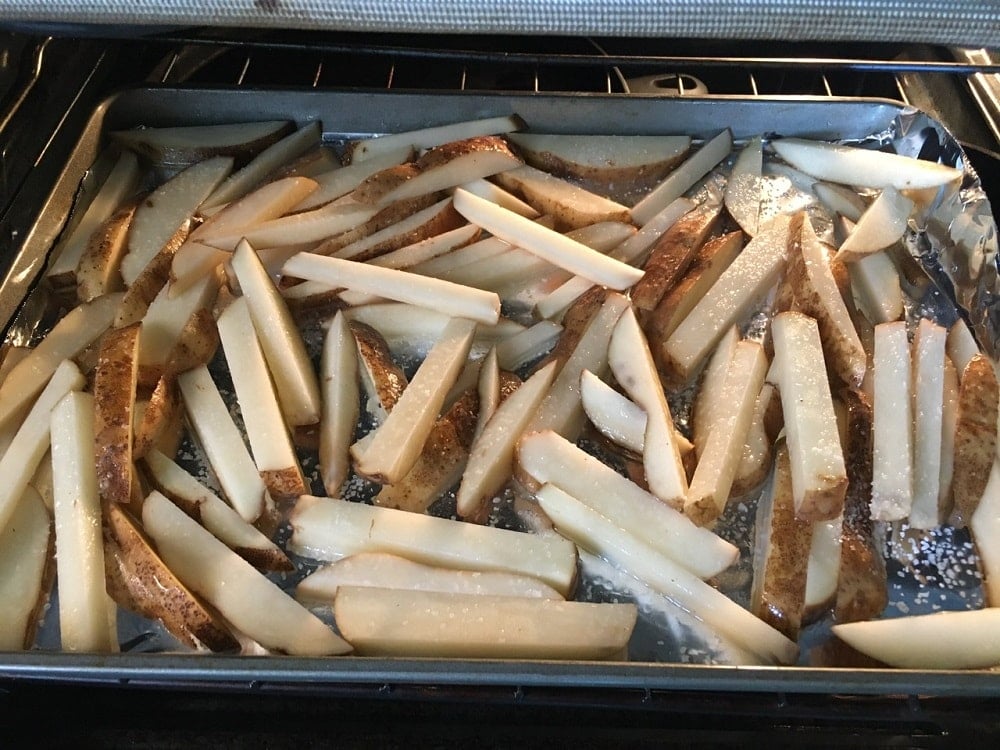 Step 4: Place the pan in the center of the oven, close the door, and set a timer for about 20 minutes.

Find something else to do for a while. When the timer goes off, use a spatula to gently flip and stir the potatoes. This will help them to cook a bit more uniformly and avoid their sticking to the foil when they’re done.

Step 5: Set a timer for another 20 minutes. You may want to proceed with the other mealtime preparations that you will need for dinner.

Step 6: After the timer goes off, take the pan from the oven.

Look the potatoes over carefully. The potatoes should be a light golden brown color, so if they’re not, return them to the oven for another five to ten minutes. When you’re satisfied with the color,  take them out of the oven. Find the biggest, fattest wedge that you can, and poke it with a fork.

It should be completely soft all the way through. You may even want to taste test the potatoes at this point. If you’re satisfied with the texture, move on to the next step. If not, return them to the oven to bake for a few more minutes. 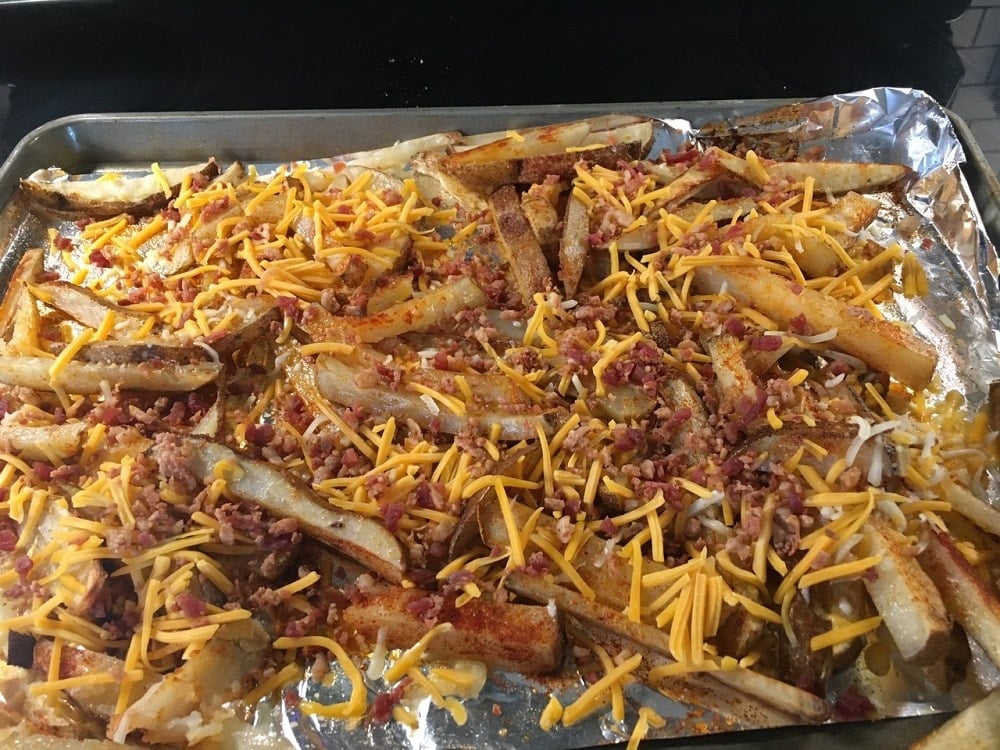 Step 8: Place the pan of potatoes back into the oven for four to five minutes until the cheese is bubbly and melted.

Serve hot, right from the oven. 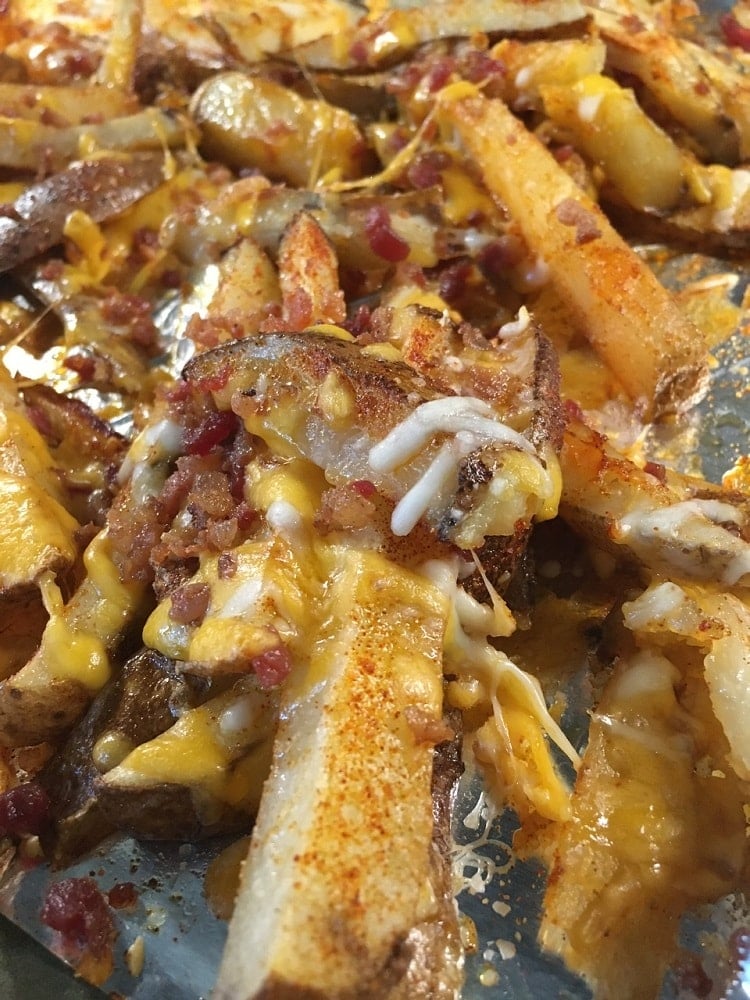 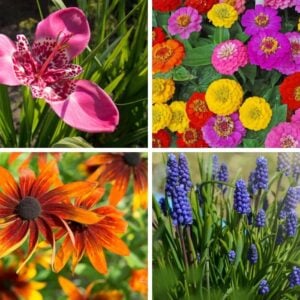 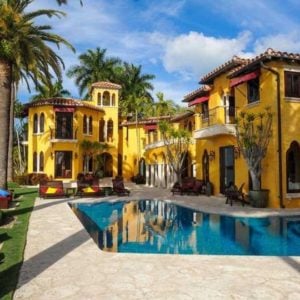