While modern minds think of salad as something that is largely made up of vegetables or fruits with a light dressing, back in the 1950s, sensibilities were different. Somehow, in the 1950s the word “salad” began to mean something entirely different. Due to the invention and marketing of commercial gelatin products, salads began to consist of a variety of different offerings, generally featuring a flavor of gelatin as a main ingredient in the recipe. 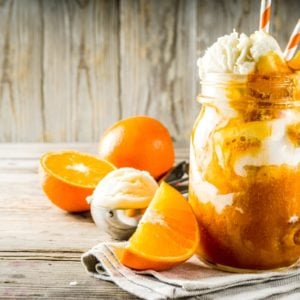 April Freeman
With a light, fluffy texture, our recipe for Orange Dreamsicle Salad can add bright color and fruity sweetness to your next potluck dinner. This recipe makes an enormous bowl of creamy salad, so it is a perfect choice for when you are hosting guests in your home as well.
Print Recipe Pin Recipe Add to Collection Go to Collections
Prep Time 20 mins
Chilling Time 5 hrs
Total Time 5 hrs 20 mins
Cuisine American
Servings 12 Servings

Frequently, the fruit was stirred into these recipes and they were generally made in intricate molds. Home cooks learned how to unmold these elaborate gelatin salads, and they were often used as a fancy, edible centerpiece on the buffet table. While salads still included beds of fresh greens with dressings, the term also included fancy gelatins that were more like a dessert. Our recipe for Orange Dreamsicle Salad hearkens back to the days when gelatin was considered a salad. Modern sensibilities will certainly categorize this dish as a dessert or sweet snack rather than a delicious and nutritious salad. However you categorize it, though, that doesn’t take away from the fact that it is a tasty treat that will be a favorite of kids and most likely, some adults as well. Our recipe makes an enormous bowl of Orange Dreamsicle Salad. Don’t be fooled by the first step of the recipe. After you have cooked the orange-flavored gelatin and the cook and serve pudding mix together, you may be tempted to put it in a smaller bowl to refrigerate it. The problem that you will encounter later, is that you’ll be adding lots of ingredients to the recipe after it is chilled. It’s worth your while to go ahead and let the gelatin/pudding mixture to chill in the largest salad bowl that you own. This recipe is designed to be made with a cooked pudding mix. Do not try to substitute instant pudding mix for this recipe. It won’t work the way that it should. The pudding mix and the gelatin mix are both chemically designed by the manufacturer to need to be cooked. Our recipe combines both of them in the same saucepan. You will need to whisk them both together as you bring the pot up to boiling. Allow the mixture to come to a full rolling boil before you remove it from the heat. You’ll also need an electric mixer to whip the set gelatin into a light, airy froth. Then, use a rubber spatula to fold the whipped topping and other ingredients into the salad. Be sure that you scrape the bottom of the bowl to make sure that you have incorporated all of the gelatin.
Keyword Dessert, Orange Dreamsicle Salad, Recipe