Combining the flavors of cinnamon and apples along with the nutrition of oatmeal, this breakfast bake gives you a fairly healthy, not too sweet option for breakfast. Rather than cinnamon rolls or pancakes, with this recipe, you can give your family a home-baked breakfast that you can feel good about.

Our recipe starts by putting old-fashioned oatmeal in a blender or food processor and pulsing it to change its texture.This takes the oatmeal from a gritty cereal to something that resembles flour. This will allow the breakfast bake to be a little more fluffy, while still including the goodness and nutrition of oatmeal.

Did you know that oats are among the healthiest grains available on the planet? Oats are a good source of fiber and healthy carbohydrates. They also have many vitamins and minerals that the human body can put to good use. Only a half a cup of oatmeal has almost 200 percent of the RDA of manganese and 41 percent of the RDA of phosphorus. Oatmeal also is a great source of minerals like copper, zinc, magnesium, iron, and folate. 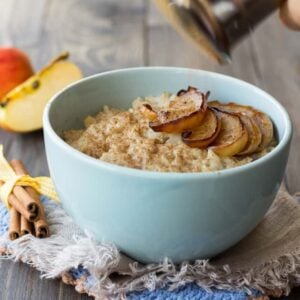 April Freeman
Cereal is boring. Waffles, French toast, and pancakes are too sweet. Eggs and bacon are too heavy and greasy. If you want a breakfast recipe that is satisfying, wholesome, and just a little sweet, our recipe for Oatmeal Apple Breakfast Bake combines the wholesomeness of oatmeal, the crunch of pecans, and the sweetness of baked apples. Add a sprinkling of cinnamon and a tiny bit of a powdered sugar glaze to have a breakfast recipe that the whole family will ask for again and again.
Print Recipe Pin Recipe Add to Collection Go to Collections
Prep Time 20 mins
Baking Time 45 mins
Total Time 1 hr 5 mins
Cuisine American
Servings 9 Servings

Oats are high in antioxidants, those plant-based compounds that can help fight cancer and lower inflammation in the human body. Reduced levels of inflammation help to improve cardiovascular health as well as providing numerous other health benefits. Since oats are high in fiber, eating them can lead to increased satiety, create a better intestinal biome, and reduce blood sugar. Oats are one of the most nutrient-dense foods that you can enjoy.  We include two cups of apples in our Oatmeal Apple Breakfast Bake. These apples add sweetness to the recipe without increasing the amount of sugar in the bake. You can use any variety of apples that will stand up to the high temperatures of the oven. Apples like Granny Smith or Yellow Delicious are great baking apples, but other apples that are good for eating raw will work well in this recipe too. Honeycrisp apples and Fuji apples are great to eat out of hand and are also good to include in a baked recipe like this one.  When you start creating this recipe, you will want to toss your peeled, sliced apples in lemon juice. This does two things. First, the vitamin C in the lemon juice coats the apples and helps prevent them from turning brown like cut apples usually do when exposed to air. Second, the lemon juice gives a tiny touch of tangy sour flavor to the breakfast dish.  Cinnamon is also included in this recipe to add extra flavor to the dish. Cinnamon comes from the bark of a tropical shrub that typically grows in places like India, South America, and the Caribbean. Cinnamon was historically used in ancient times to treat sore throats, coughing, and arthritis. Modern scientific studies have indicated the cinnamon has great levels of antioxidants and inflammation-reducing compounds. Cinnamon may also improve cardiovascular function and help protect from cancer.
Keyword Breakfast, Dinner Recipe, Oatmeal Apple Breakfast Bake