If you are looking for a rich, delicious dessert that gives you the flavors of chocolate and peanut butter, look no further. Our recipe for No-Bake Chocolate and Peanut Butter Cheesecake is quick and easy to whip up, and it is absolutely scrumptious!

Many people believe that making a cheesecake from scratch is something that only expert bakers can accomplish. After all, you’re taking a runny, dairy-based batter and baking it into a thick, rich, and semi-solid dessert. Sometimes the cheesecake cracks and then your cheesecake doesn’t look all that great.

To get a perfect cheesecake, you have to control humidity in the oven by using a water bath, you must take care while beating the ingredients, and you have to let the cheesecake cool gradually in the oven. Even if you do these things, sometimes cracks will still develop on the surface of the baked cheesecake. 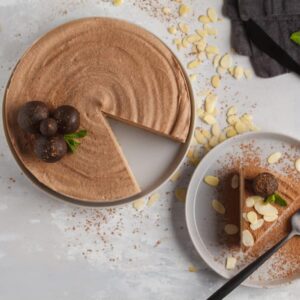 April Freeman
What could be better than the combination of chocolate and peanut butter? Why not add the dreamy richness of cheesecake to the mix? Our recipe for No-Bake Chocolate and Peanut Butter Cheesecake does exactly this. Diet food? No way. But if you are looking for a recipe that is luscious, rich, and absolutely scrumptious, this recipe is just that.
Print Recipe Pin Recipe Add to Collection Go to Collections
Prep Time 20 mins
Refrigeration Time 4 hrs
Total Time 4 hrs 20 mins
Cuisine American
Servings 8 Servings