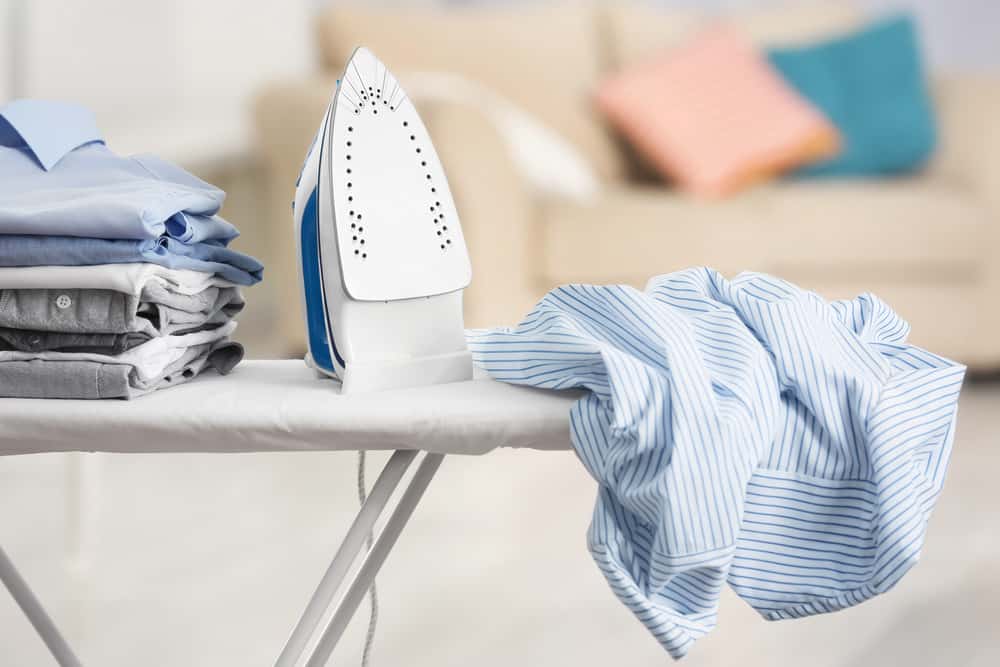 If your household frequently needs to get ironing done, you’re probably thinking about buying an ironing board and iron to go with it. Getting your shirts and suiting professionally pressed adds up, then when you throw in children’s school uniforms, items that were wrinkled in storage or moving, and so on, it pays to invest in a top-notch iron and ironing board.

The team at Home Stratosphere thoroughly tested the top three ironing boards and top four irons to deliver the verdict on which pair is the best for getting your clothes crisp and sharp-looking, and is most likely to fit the average user’s needs and lifestyle.

Here’s our picks complete with real pictures and GIFs so you have the assurance that a real person tested these products! These are 100% genuine and tried in a real home, not a video studio, for ultimate authenticity.

We reviewed four top-rated irons from well-known brands using a cotton-poly blend blouse and a linen blend skirt to test them with and without steam.

With the exception of the Shark Steam, all of them have self-cleaning buttons which is important if you plan on using steam quite a bit.

All of the irons we tested have auto shut-off features though we still recommend unplugging them when not in use. They produced similar results with the appropriate settings for the fabrics, although at varying speeds and functionality. Here’s how they stacked up in terms of features and function relative to the price. 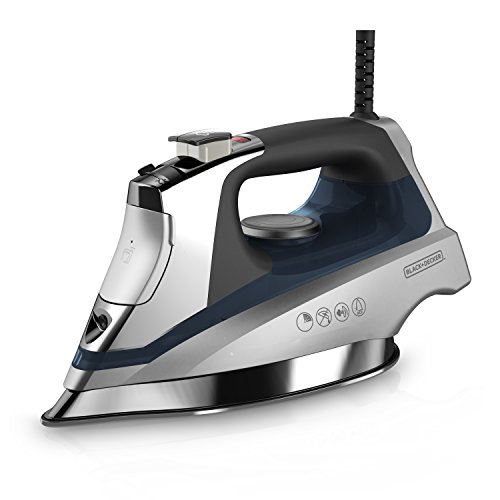 Black & Decker has several iron models on the market, and you can get the “professional” version for a relatively inexpensive price. The stainless steel soleplate glides very smoothly over garments with and without steam. 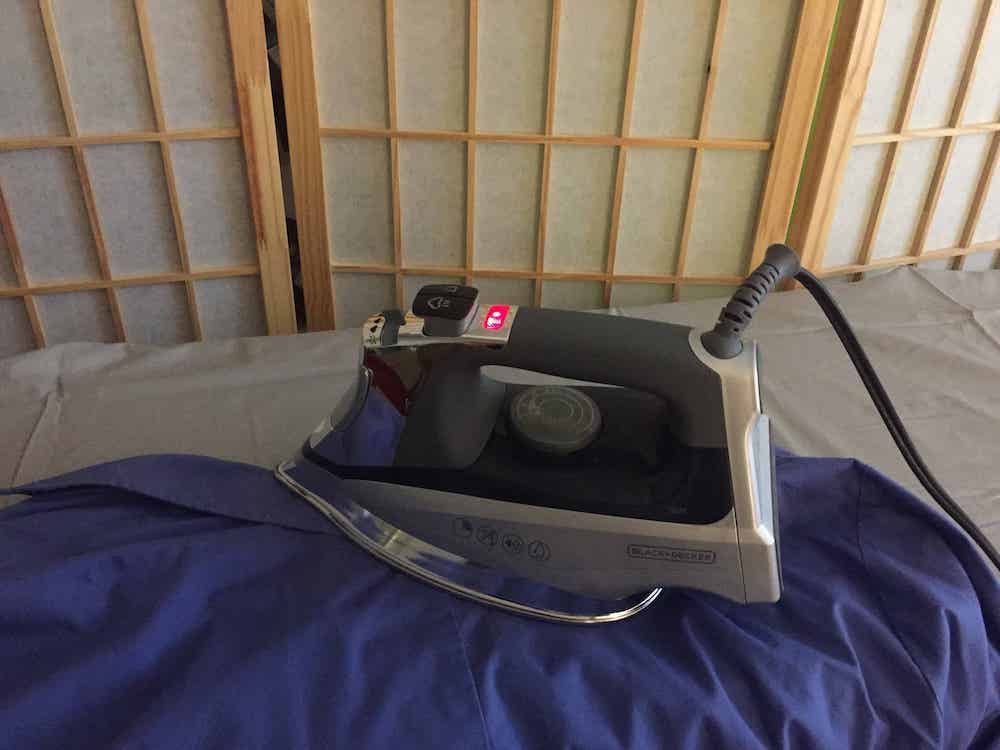 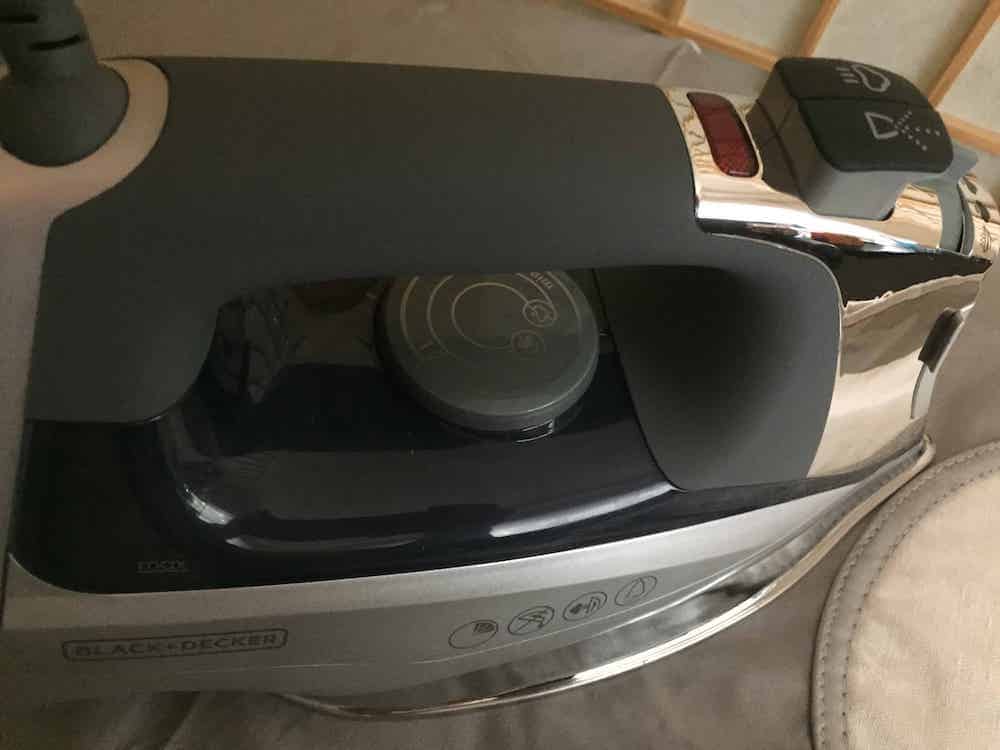 If you need steam to really get those collars nice and pointy, the Allure claims to produce up to 30% more steam than other leading iron brands. After testing the other irons on this list, and using this one on an incredibly wrinkled blouse, the “30% more” claim didn’t seem to hold at the lighter steam levels but does at the higher settings, which can be clicked at the top of the handle. If you don’t use steam, you can still get velvet-smooth results.

While the Allure has settings for different types of fabric, the dial is tucked under the handle and it can be difficult for some users to read. The other drawback is that adding water for steam is a little difficult with this model whether you tuck it under the faucet or use a measuring cup, and it’s hard to tell how much water is inside the fill gauge.

The Allure gets the job done well despite the fill gauge being hard to read. 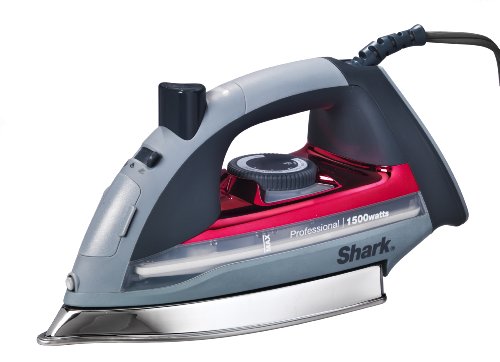 Shark Ninja is known for their innovative home products like shuriken-powered blenders and cordless vacuums, and their line of irons is no exception. 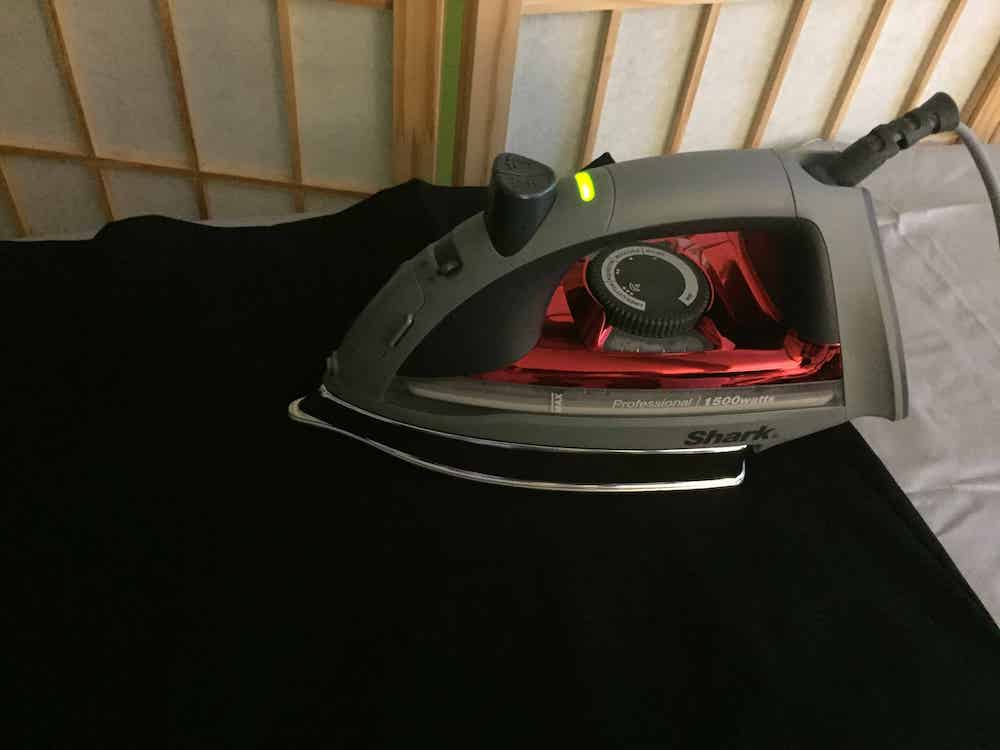 The soleplate has more scoring in it compared to the other irons we tested so that you get incredibly thorough heat distribution. With the button tip at the end of the plate, the shape and light weight make it easy to maneuver around smaller garments with garments. That even distribution also makes it ideal for Perler bead pixel art, if you’re into that! It slides smoothly on cotton and poly blends. 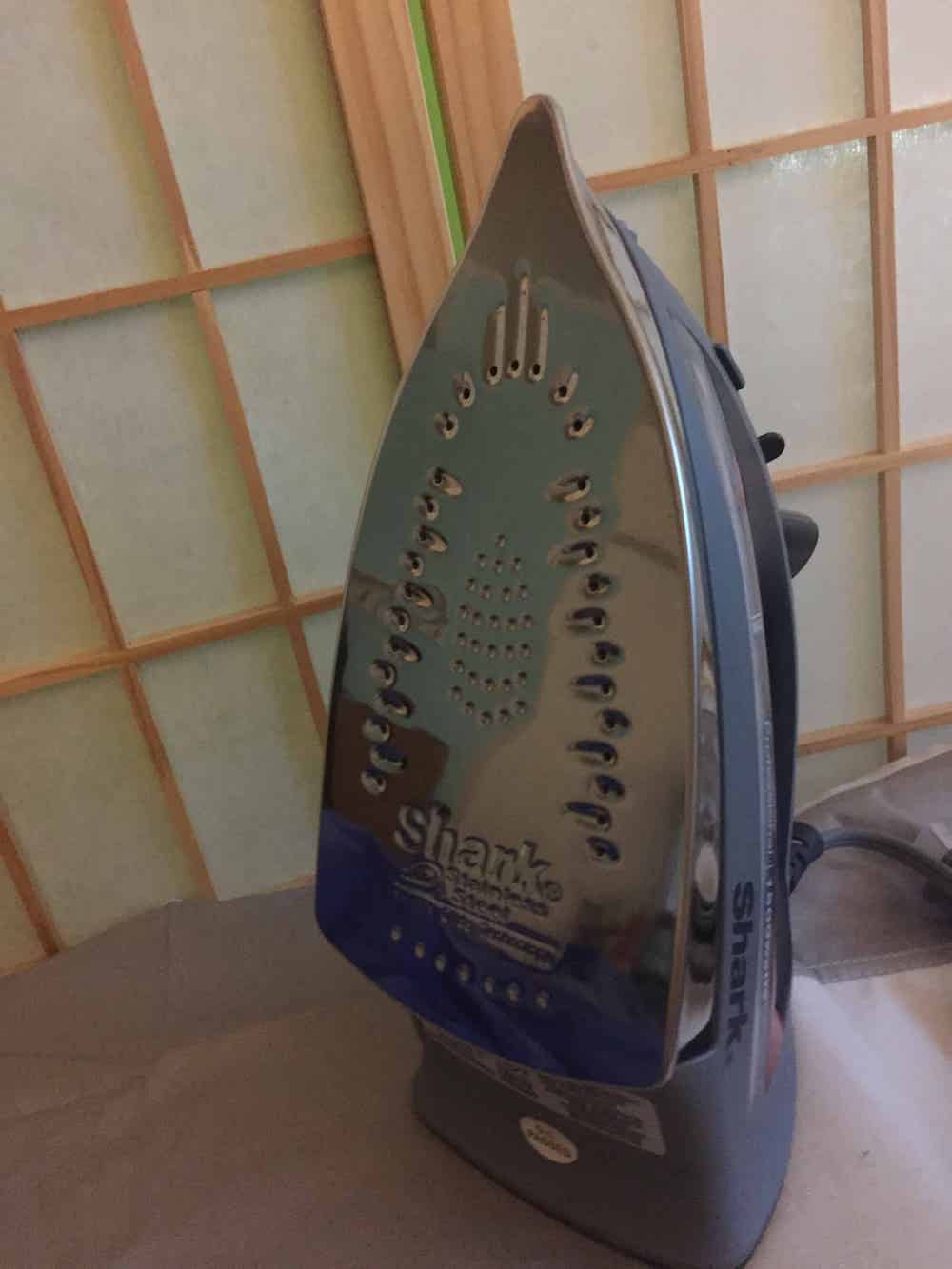 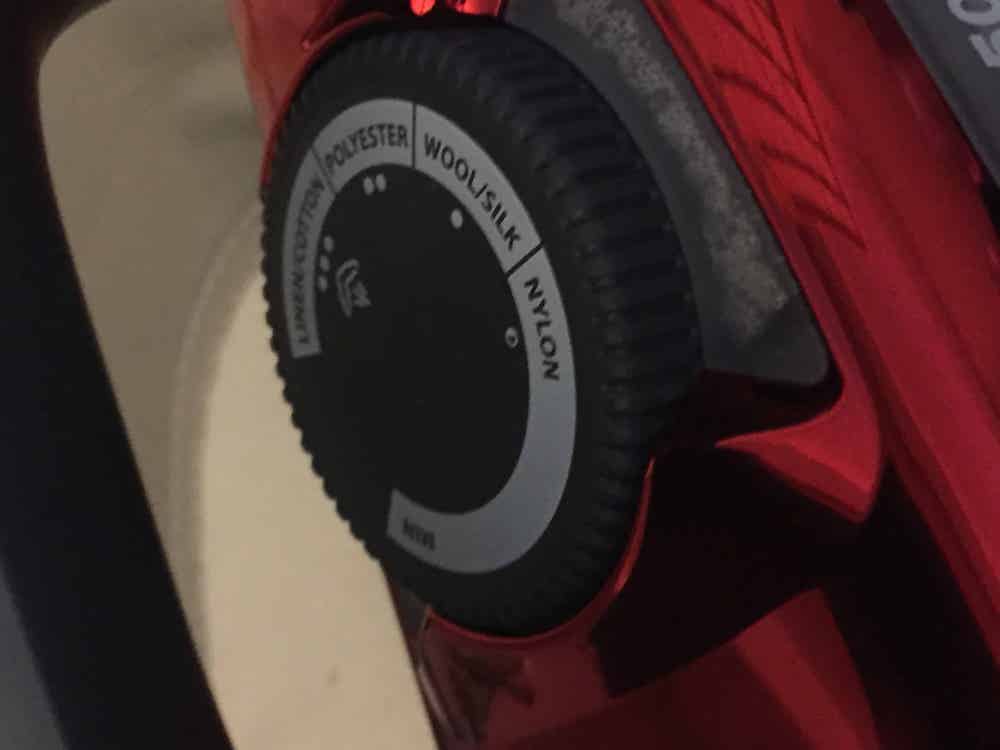 The fabric dial also has a setting specifically for poly cotton blends, which wasn’t seen on the other irons (usually you have to pick between cotton or synthetic at opposite ends of the dial). If most of your garments are this blend, Shark Steam just might be it.

The best features are that the fill gauge is transparent so it’s very easy to see how much water is in there, and the power light goes from orange to green when it’s ready to use. There are three steam settings and the water heats up pretty quickly, with steam release and spray buttons in the handle. 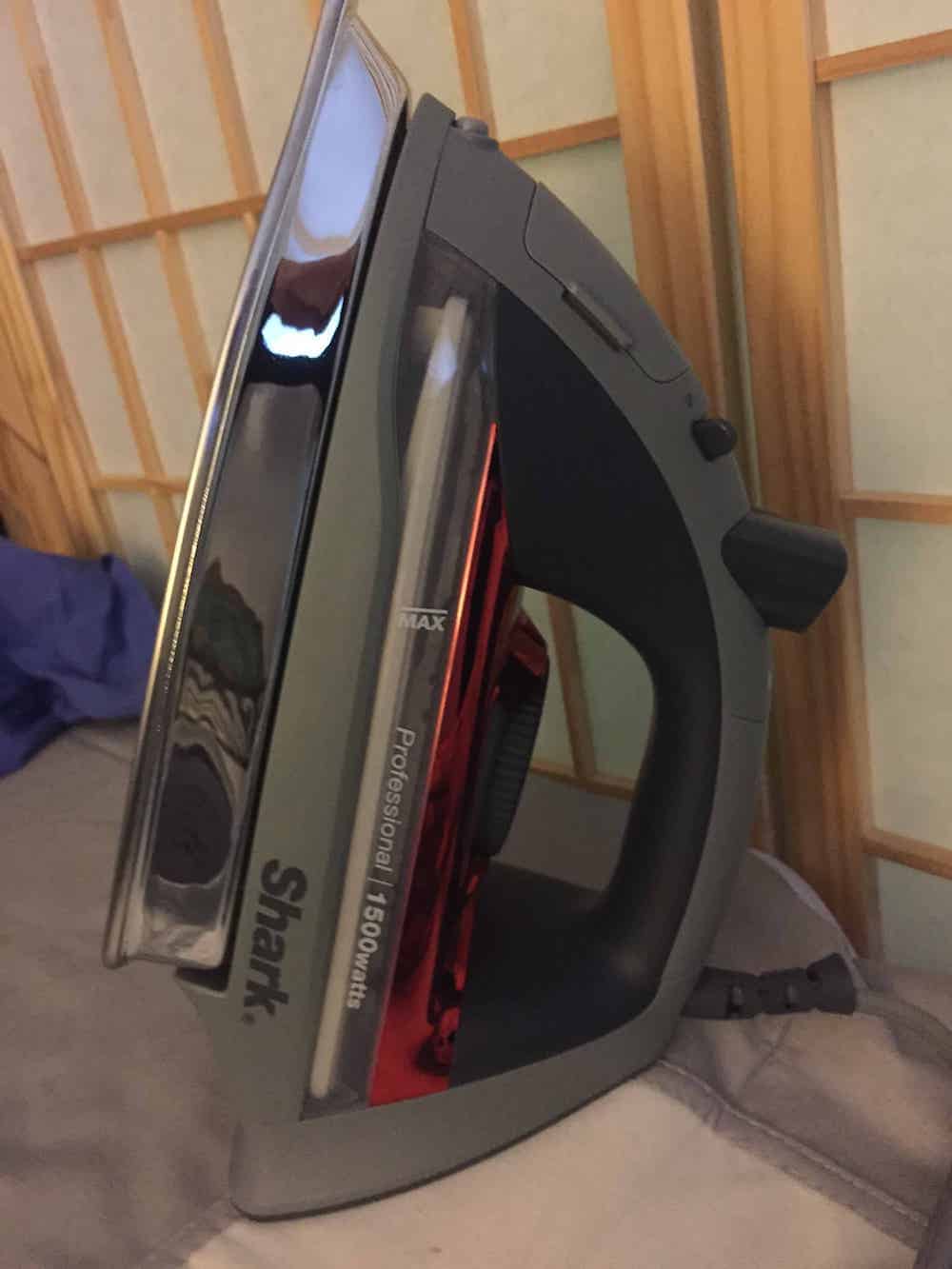 The only major drawback to this iron is that it doesn’t have a self-cleaning mode like all of the other irons that we tested. Self-cleaning is really crucial if you use steam a lot. But if you don’t plan on using steam much or at all, this may not be a big deal to you.

The Shark Steam GI305 delivers excellent bang for your buck. 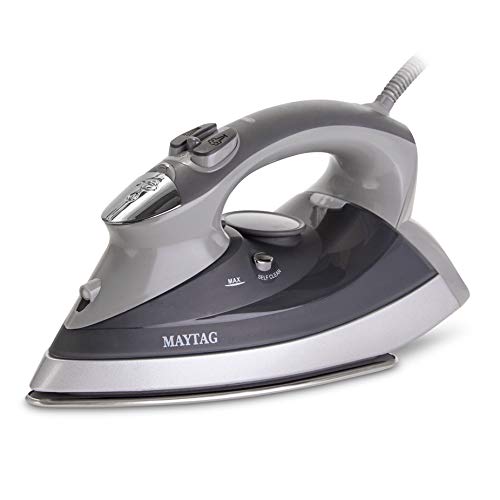 Maytag has a reputation for quality electronics but the M400 Speed Heat didn’t quite live up to the “speed” part of its name.

This iron does run very smoothly: we ran the soleplate over a skirt that was incredibly wrinkled from storage and it almost instantly got the wrinkles out without any steam, which was impressive. If you want to use steam though, it has a vertical steam function in the handle to get rid of wrinkles and this can make for some nice pointy collars. 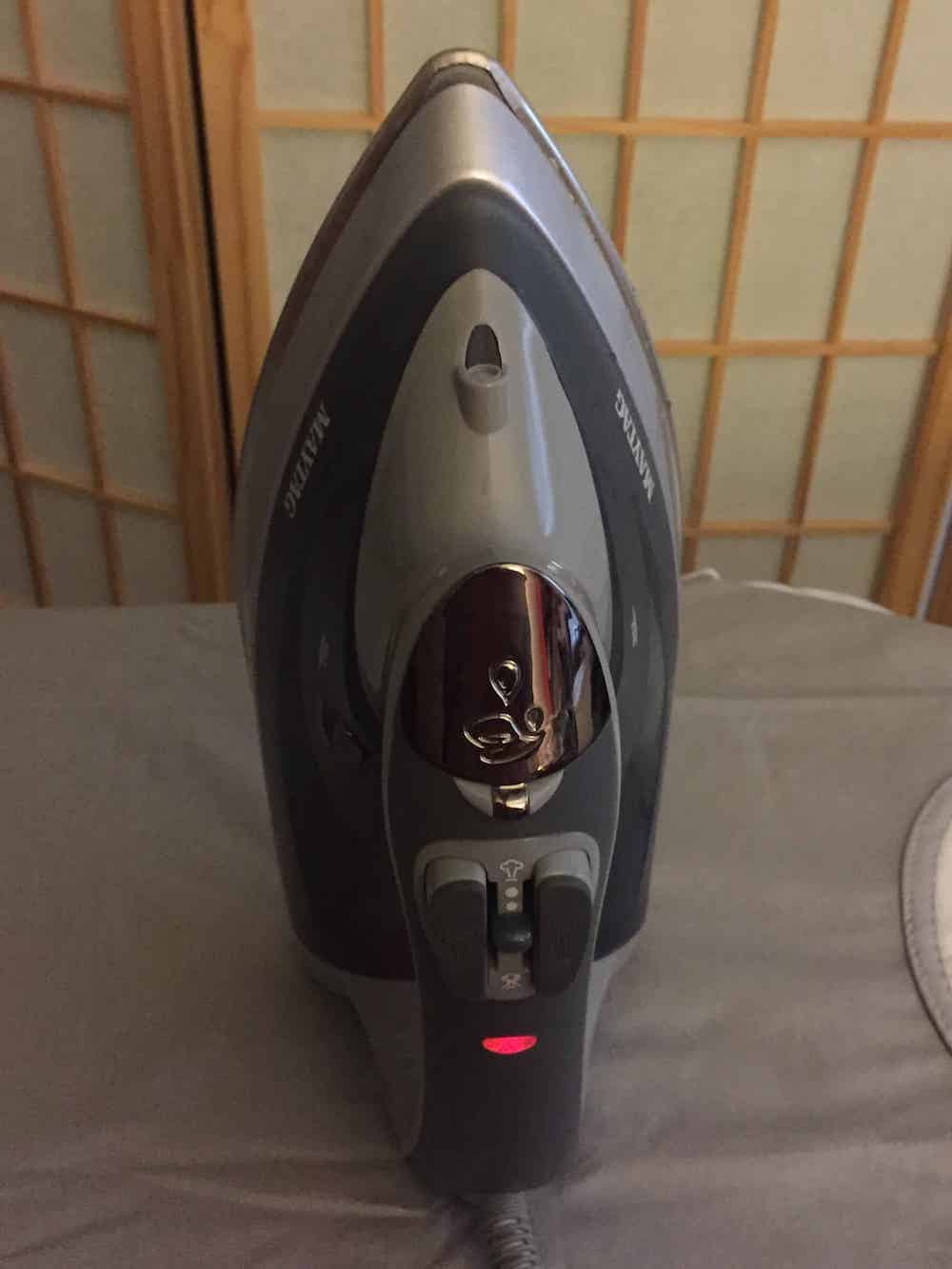 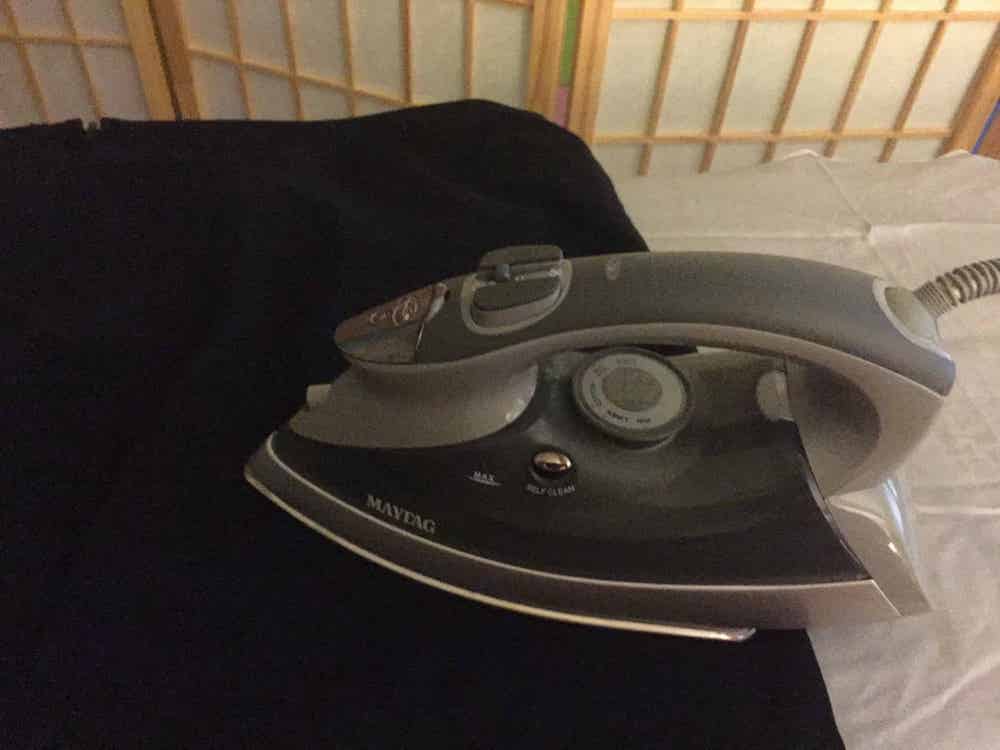 While Maytag claims to take just 55 seconds to reach maximum heat, it didn’t take too long to get hot but once you fill it with water it can take a lot longer. Relative to the other irons tested, it was easy to fill with water and didn’t make a mess. However, the fill gauge is almost impossible to see and it kept doing this:

Irons usually don’t blink unless there’s something wrong, so it assumed there wasn’t enough water to create steam even though we filled it about halfway. It took a few tries emptying and refilling to thoroughly test out the steam functions and while it didn’t heat up as quickly as the Shark Steam, it got plenty of steam going and the settings were easy to work with. It finally stopped blinking on the third try so we don’t know what exactly happened. But whether it blinked or didn’t, it produced some of the best creases we’ve seen and instantly go all the wrinkles out.

This iron can create more work for you than a budget iron although if you don’t really use steam, it’s worth it if you just have lots of persistent wrinkles in your clothes and want them out at the same speed it takes to send a tweet.

Sunbeam products can vary from incredibly simple to tons of unnecessary bells and whistles. This particular iron in their Steam Primary second series that we tried out looks like the latter, but ended up being easier to operate than it looks. 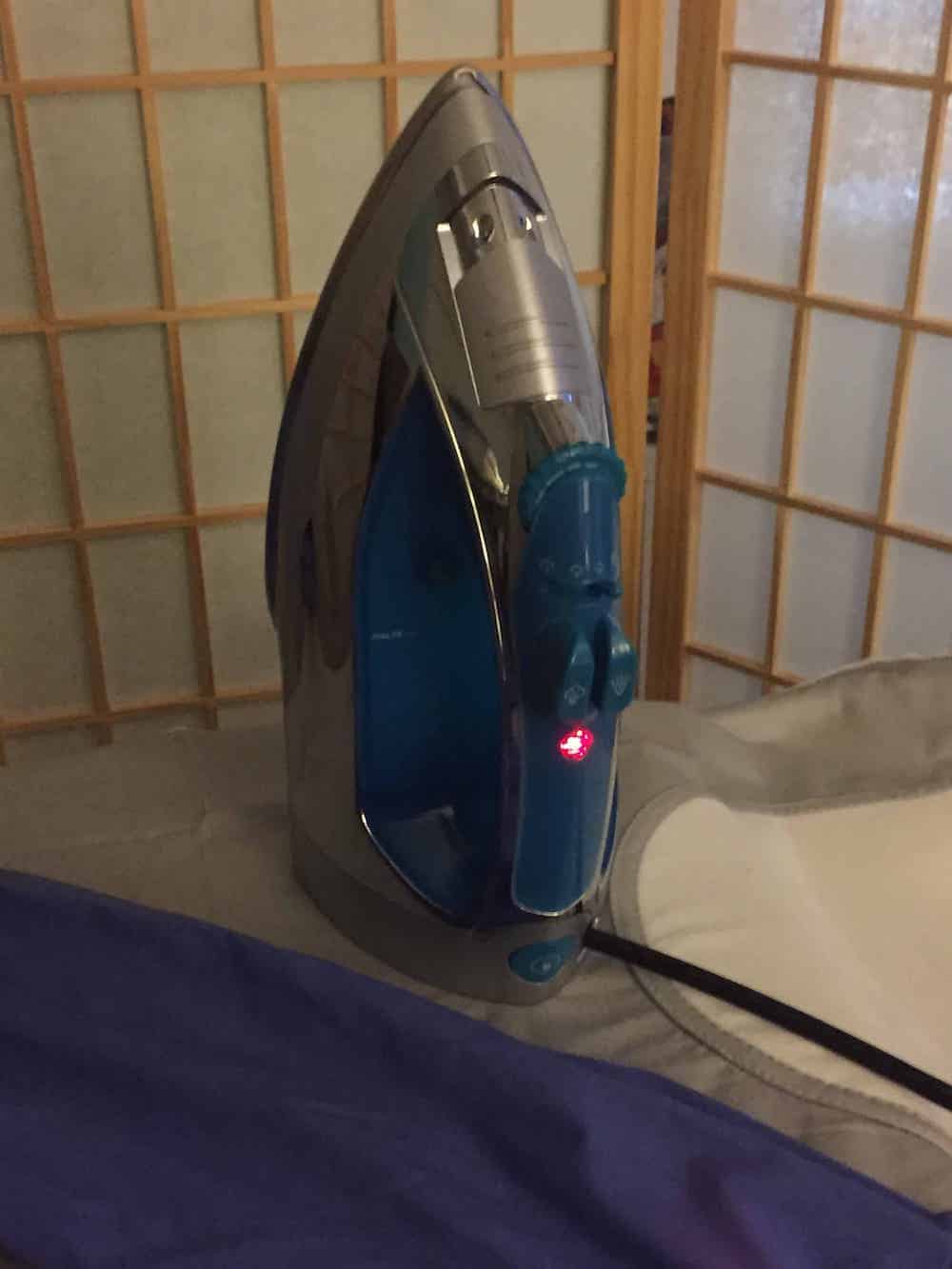 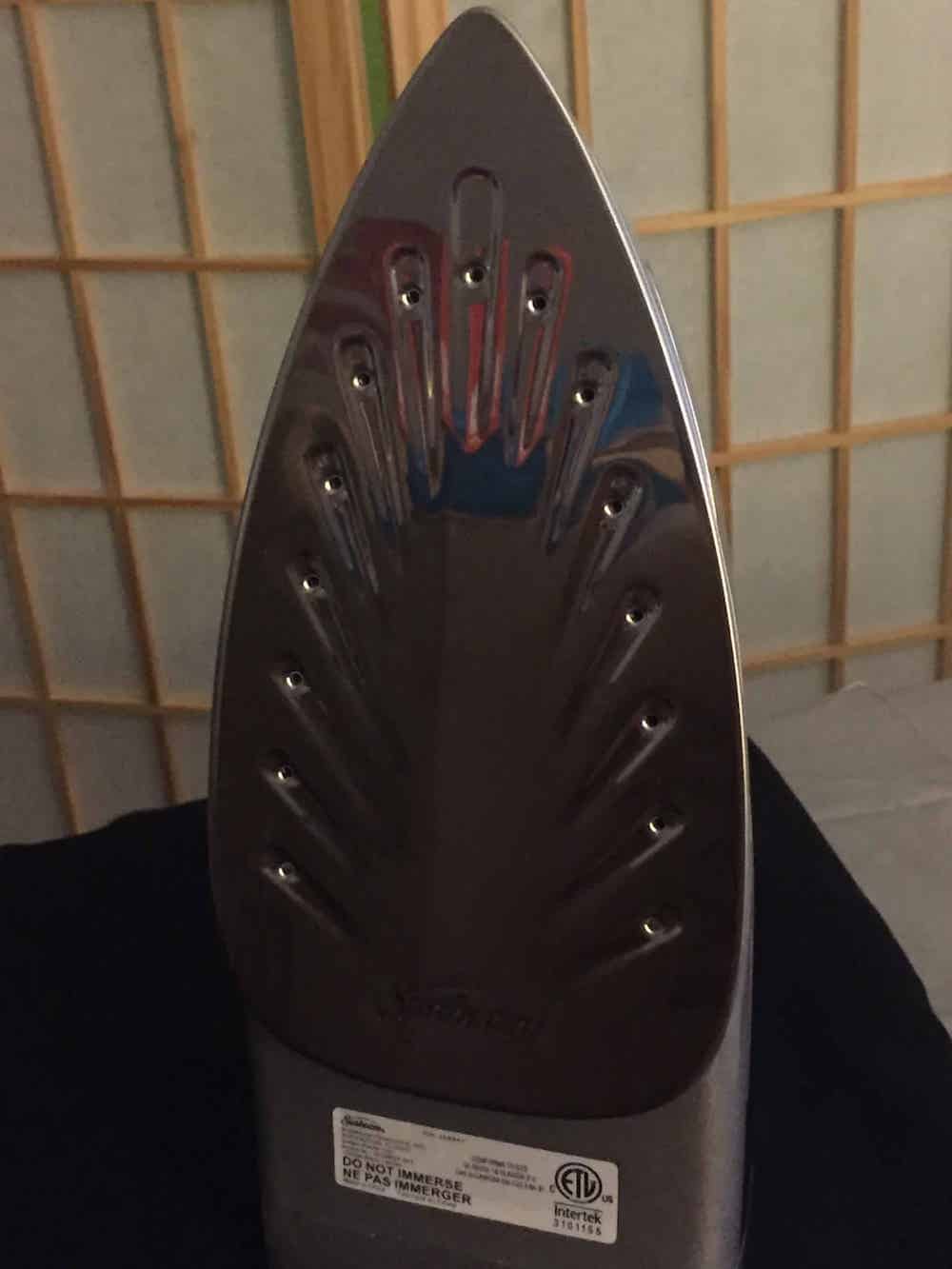 The best feature is the cord tuck button at the base so that you don’t have to worry about accidentally molten cords while cooling, or storage-related calamities. Since the entire back of the iron under the handle is fairly translucent, the fill gauge is easy to read.

However, this iron is incredibly bulky compared to the other irons we tested. This made filling it with water difficult since it didn’t fit under the tester’s faucet, so you’re better off using a funnel or measuring cup to add water which can get messy. The bulkiness also made it hard to maneuver around some garments although if you’re mostly ironing linens and very large garments, this is an aspect that will make your life easier.

On account of the Sunbeam Steam Primary’s large size, it takes a lot longer to heat up than the other best steam irons we tried. In terms of how well it gets the wrinkles out with and without steam, it works but wasn’t as strong as the Allure or Shark Steam. It also didn’t get that anti-wrinkle power going as fast as the Maytag did, and we’re unsure if this is because of the size alone or how the soleplate distributed heat. While it has a nifty dual stream mist, this is unfortunately negated since it’s hard to work around collars and buttons on your standard collared shirt.

I’d only recommend the Sunbeam Steam Primary if you have linens or large garments requiring a larger than average iron.

It was a tie between the Maytag M400 and Shark Steam.

The tiebreaker? Your needs, for the most part. If you’re looking for the best value for your money, overall easiest iron to use, and your ironing/pressing needs are fairly simple, Shark Steam wins this round.

From a usability standpoint, the Shark Steam is a dream because the fill gauge was the easiest to see, going from an orange to green light is also easier than the traditional “you can’t tell if this is still on because the light went out” feature, and the soleplate has more even distribution. But due to that lack of a self-cleaning feature, it could be iffy if you use a lot of steam and don’t want to risk mineral build-up.

If you need to use steam frequently though, the Maytag is the better choice despite the fill gauge being hard to read. While it was hard to tell whether the Allure produced more steam like it claimed to at lower settings, it produced similar results to the Maytag but the latter did it in far less time. Since it has a self-cleaning mechanism, build-up isn’t as much of a concern. While the speed part of the name may not be in the heat-up time, it gets wrinkles out incredibly quickly.