If you need a hot dip for your next football party, you may want to try this recipe for Mexican Street Corn Dip. Tangy and cheesy with a hint of heat, our recipe is perfect to enjoy with chips and crackers.

Originating in Central America, corn is one of those foods that is distinctly American. It was a cornerstone of American cuisine, particularly in Central America for centuries. This grain goes back as far as the Aztec civilization, and it is still popular despite the availability of other kinds of food.

The version of Mexican street corn with which most of us are familiar has its roots in Mexico City, Mexican. The street vendors in this ancient Central American city typically offer many kinds of snack foods. Generally, the main ingredient in many of these snacks is corn. The Spanish word for corn is “elote,” and if you ask for elote on the street you will receive a cob of grilled corn covered in butter, mayonnaise, chili powder, and cotija cheese. Another dish that is more similar to our Mexican Street Corn Dip is called esquites. Esquites is served in a cup and has similar flavors to the classic elote, but the corn kernels are cut off of the cob. 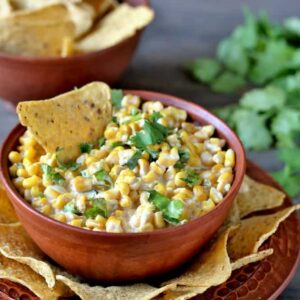 April Freeman
If you are searching for an appetizer recipe to serve at your next sports party, nothing can be better than this recipe for Mexican Street Corn Dip. Made from tasty, colorful corn combined with spices and two kinds of creamy cheeses, everyone will have their chips ready to dig in as it comes out of the oven.
Print Recipe Pin Recipe Add to Collection Go to Collections
Prep Time 10 mins
Baking Time 25 mins
Total Time 35 mins
Cuisine Mexican
Servings 10 Servings

Our dip isn’t exactly like what you would get if you asked for Mexican Street Corn, but the flavors are inspired by this regional treat. We add cheeses and use Greek yogurt to add a tangy twist to the dip. If you don’t have Greek yogurt in your kitchen, you do not have to rush out and buy some at the grocery store. You can simply substitute sour cream instead.  You can use canned corn for this recipe, but if you have access to fresh corn, your dip will taste even better. Just cut the kernels off of the cob before using them in the recipe as directed. You will probably need four to six corn cobs to have the correct amount of corn for the recipe. Frozen corn can be used as well, but you should thaw it in the microwave and drain it well before you mix it into the other ingredients.  One thing that is great about this recipe is that you can create it up to 24 hours before you want to serve it. Cover it with plastic wrap and store it in the fridge, and then you can remove the plastic and pop it into the oven about 25 minutes before you plan to serve it.  Suppose you want to take this dip to the next level. What are your options?  You don’t have to stick to the basic recipe. If you enjoy tinkering with recipes and trying new tastes, the following additions will make this basic dip amazing. Bacon–Cook and crumble four or five strips of bacon. Add most of the bacon to the mixture when you stir the corn mix into the cream cheese mixture. Save out about a third of the bacon to sprinkle on top. Yum! Different Cheese variations–If you really want to play with the flavor of this recipe, change out the cheddar cheese for something a bit different. You can substitute pepper jack, sharp cheddar, or smoky cheddar for a new and different flavor profile. If all you want is a little tweak, you can substitute just part of the cheddar with something else.  Tomatoes with chili peppers–These versatile tomatoes are good for things other than just chili and soup. Drain the juice of a 12 ounce can of diced tomatoes with chili peppers and then stir it into the dip.
Keyword Dinner Recipe, Mexican Street Corn Dip, Side Dish